Showing posts from September, 2011
Show all

I have reviewed this flight a couple of times before, and it probably is one of my most often flown routes but here is an update review of the economy class service on TG466, Melbourne to Bangkok. The flight is one of two daily flights between Melbourne and Bangkok operated by Thai Airways. The mid afternoon departure gives you a late evening arrival in Bangkok, great for onwards connections to Europe and ideal for those whose final destination is Bangkok as well. AIRLINE: Thai Airways International FLIGHT NUMBER: TG466 AIRCRAFT: Boeing 777-300 HS-TKB (12 years 8 months old) SCHEDULED TO DEPART: 15.00 ACTUAL DEPARTURE: 15.03 SCHEDULED TO ARRIVE: 21.30 ACTUAL ARRIVAL: 20.48 CLASS: Economy HS-TKB, my aircraft today has just this year had the most recent Thai livery applied after flying the first 12 years in the old scheme (Picture courtesy Alexander Watts/Airliners.net) I arrived at check-in at about 1pm, 2 hours ahead of departure time. Ch
1 comment
READ MORE... 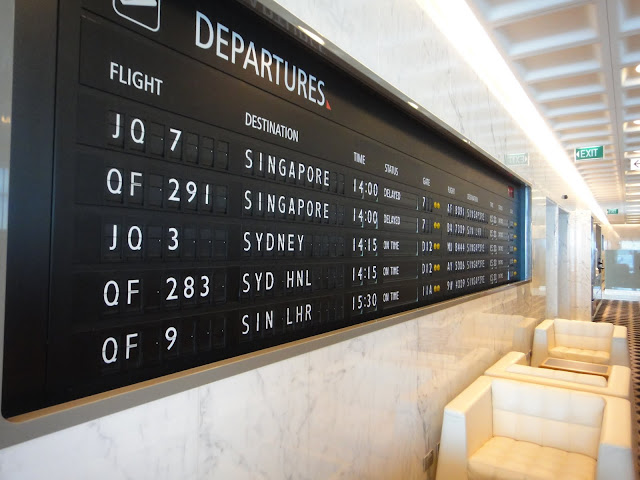 On a recent adventure I had the pleasure of spending some time in the Qantas First lounge at Melbourne along with a friend of mine. The lounge is quite a bit smaller than the one in Sydney but with that you get a much more personal service with everything being taken care of from the moment I arrived. The Departures Display The friendly waitress tended to my friend and I immediately upon being seated, taking drink orders and asking whether we would be having lunch today. We ordered Taittinger champagne and advised we would be eating a little later. The lounge area was very bright with a lot of sunshine flowing through the windows and we were even asked if we would prefer the blinds closed, which I didn't. Champagne The Menu  The menu was the winter menu with some changes compared to Sydney including an additional champagne choice: the Veuve A. Devauc blanc de noir. I sampled all 4 options! After a couple of pre-drinks we moved over to the Rockpool operated restaurant a
Post a Comment
READ MORE...
More posts