- February 26, 2010
I had a family function up in Brisbane to attend followed by an afternoon function back in Melbourne the following day so I decided to stay at the Holiday Inn Brisbane overnight, with the easy access to the airport train for a morning flight back to Melbourne.

Holiday Inn is located above the Roma Street transit centre in the Brisbane CBD. It's very convenient if you are coming from or going to Brisbane airport as the train station is underneath and Brisbane has a very handy airport train service.

I arrived at the hotel about 5pm to be informed that there were no standard rooms which were clean, so I got upgraded to a deluxe corner room which was nice. It was kind of a mini-suite with a seperate lounge area. Here are some pics: 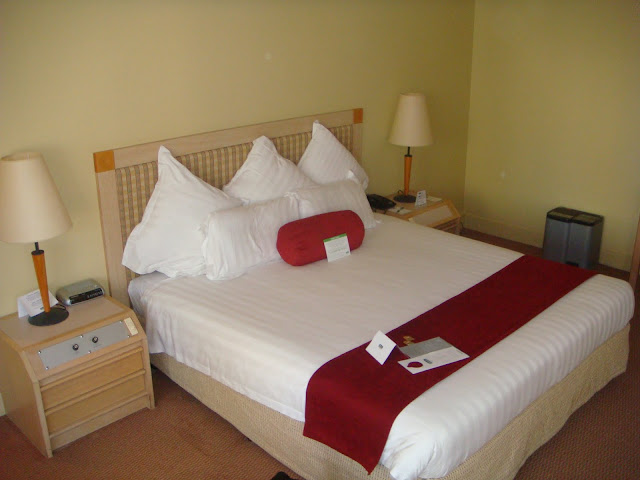 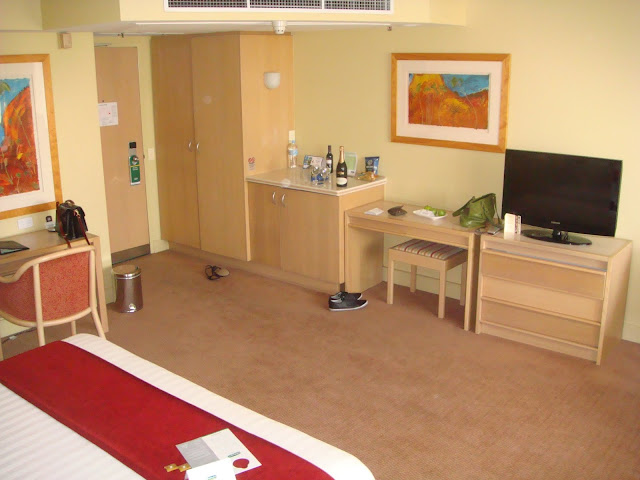 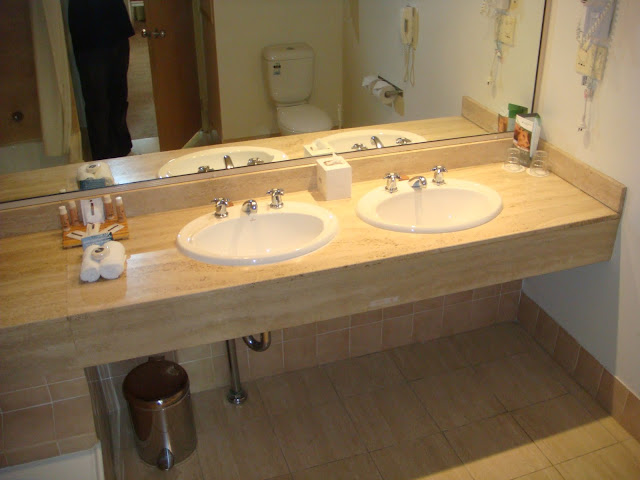 I was actually quite impressed with the room, it had everything one could want and the location is great. The bed was very comfortable. I did not use any of the room service or other facilities at all so can't comment on them!

This was the view from my room... 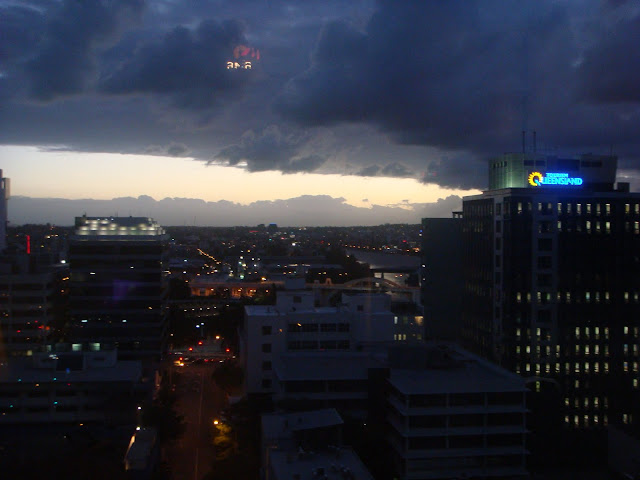 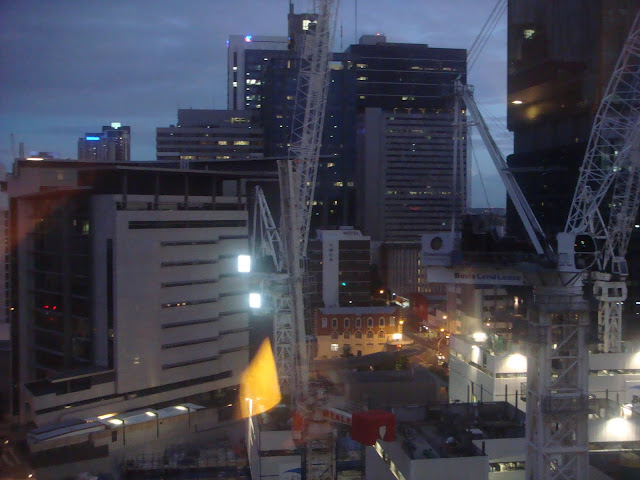 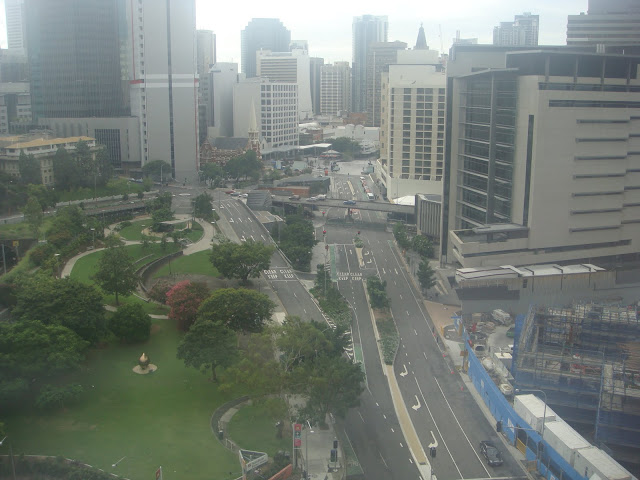 The flight was due to leave at 10.15AM so I headed to the train station at about 8.30 and got the next train to the airport. They run every half hour. Price is $14.50 one way. It takes just under 30 minutes to get to the domestic terminal with about 4 or 5 stops along the way. 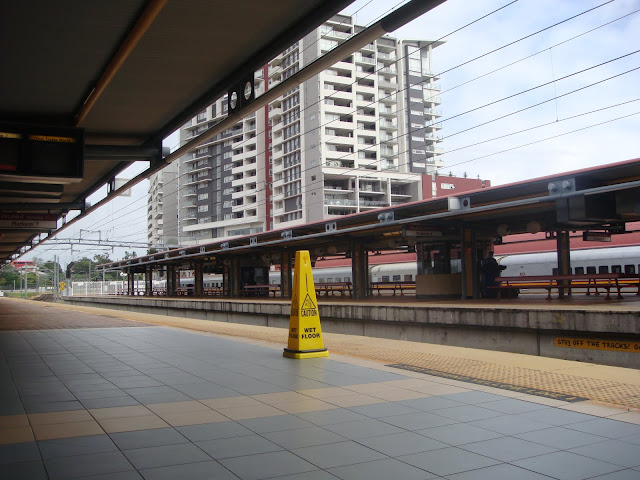 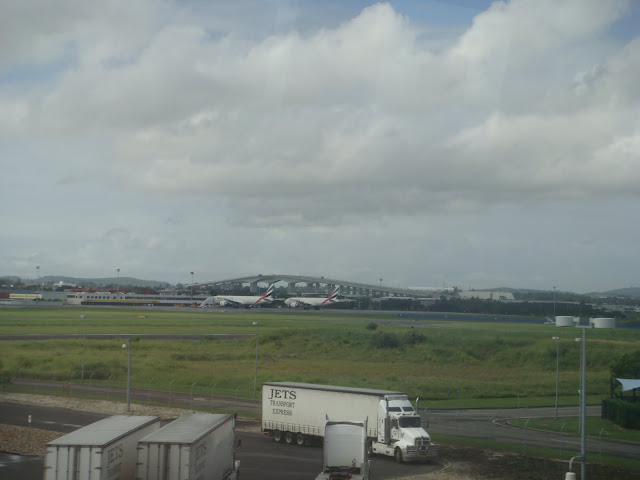 View from train towards old international terminal - 2 Emirates 777s, one had a mechanical problem 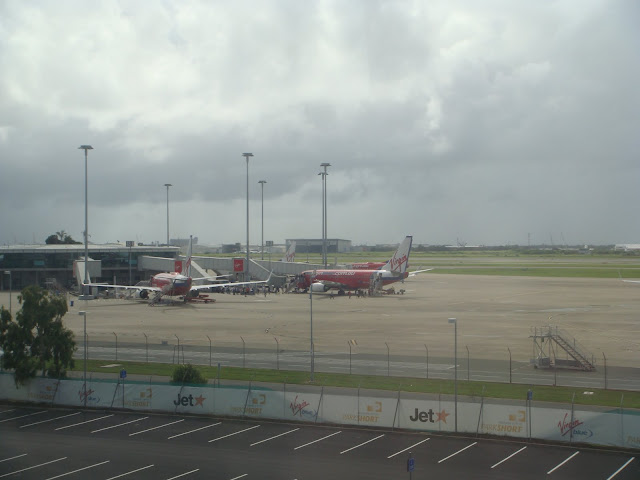 View from train to Virgin Blue domestic terminal
After a pleasant ride on the train, most of which is on elevated track, we arrived at the domestic terminal station where I disembarked and crossed the elevated walkway across the car park and then down the stairs to the check-in desks. At Brisbane the check-in area is located on the ground floor. 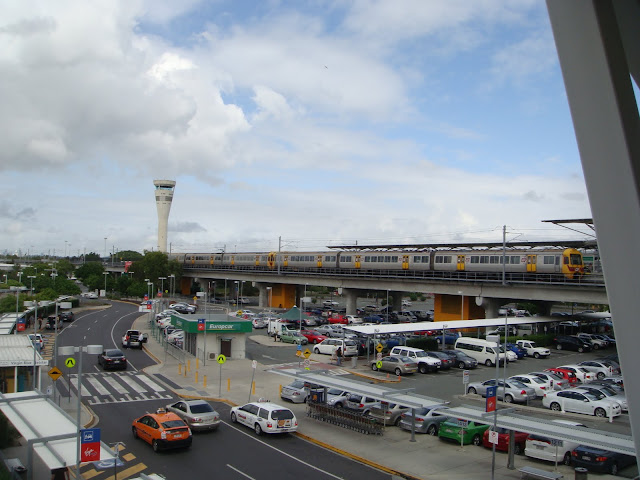 Walking from train station over to terminal, control tower can be seen
I had checked in online and had a window seat about 20 rows back. I headed to the checkin kiosk to print my boarding pass, I swiped my Qantas Frequent Flyer card and my itinerary was displayed. I decided to see if a seat further forward had opened up, and I was pleasantly surprised to see 5A was open, so moved myself to it and printed the boarding pass. Since I had hand baggage only I went through security and upstairs.

I have no status with Qantas/oneworld so I went to Hungry Jacks for a $4.95 breakfast of bacon and egg muffin, hash brown and coffee. By the time I was done with that the flight was boarding.. 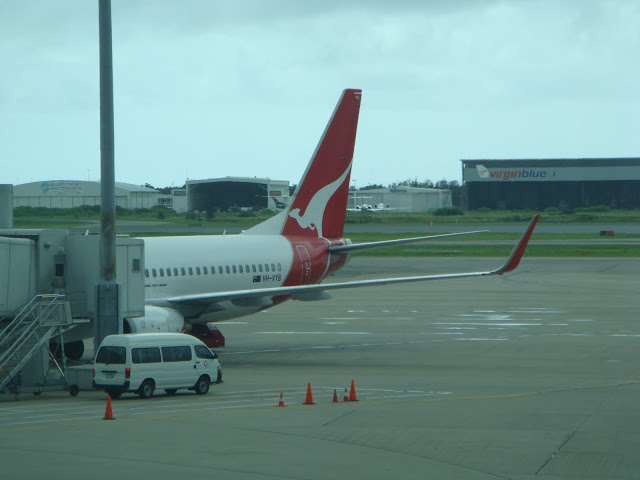 VH-VYB, my ride to Melbourne 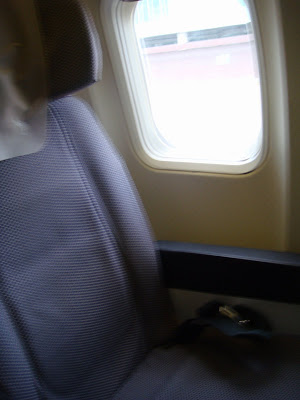 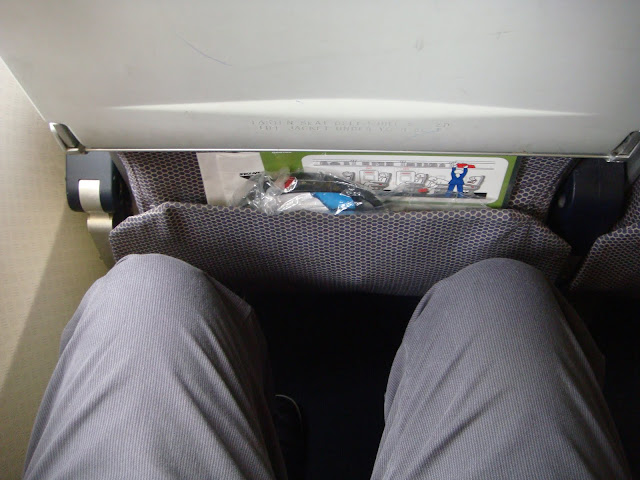 leg room shot - adequate
I was pleased to find the middle seat free after doors were closed, today's flight was about 75% full up the back, but Business Class appeared full. The crew were warm and friendly and I was pleased to be back on Qantas after flying up to the Gold Coast 2 days earlier on Tiger Airways. The Tiger flight up was fine but Qantas just has that more professional and upmarket feel. Moments after doors were closed we were pushing back and on our way. 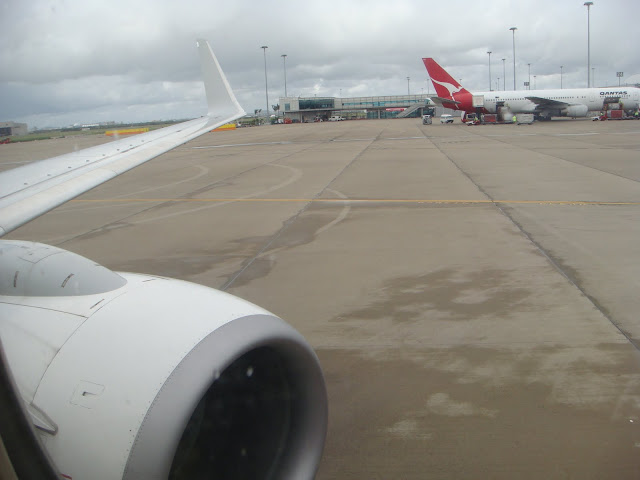 view from my seat -  about to pushback. Qantas 767 parked nearby
We taxi'ed over to Runway 01 and departed to the north over the bay, before a series of right hand turns over the port area and tracking back inland over the southern suburbs of Brisbane with the Gold Coast out to the left. 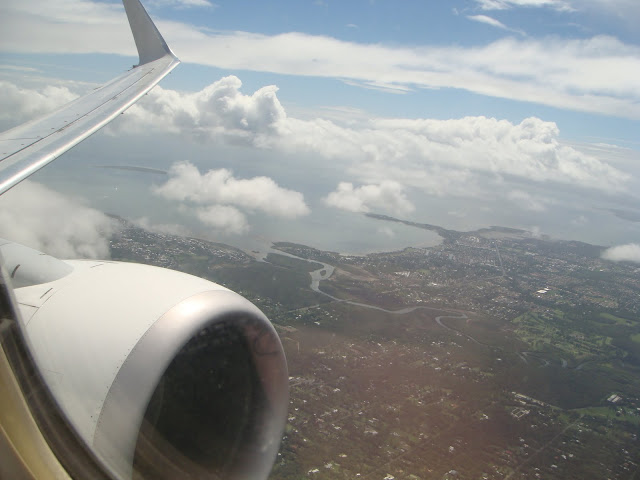 Climbing out of Brisbane heading inland
There was a bit of minor turbulence during the climb out but a few minutes later the seatbelt sign was off so it was time to settle back for the 2 hour flight home. The captain gave us a run down of the route and weather over the PA. The flight attendant announced that morning tea would be served on today's flight. 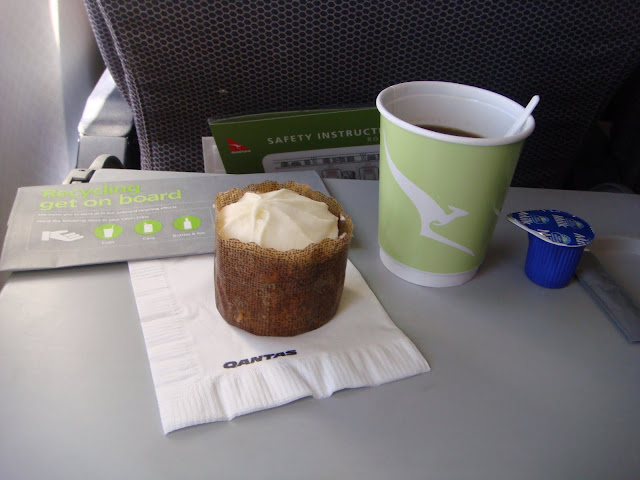 Morning Tea - Carrot cake and a coffee
Qantas really push the recycling on board these days and provide you with a bag for your rubbish, with recyclable cups and bottles to be given directly to the flight attendant to go in a separate recycling bin. Good on you Qantas! Morning domestic Cityflyer flights do not offer free alcohol in economy but a full range of hot and cold drinks are available. My carrot cake was really tasty!
I was pretty hung over so put my headset on and dozed off for a while. I woke up again during the descent... 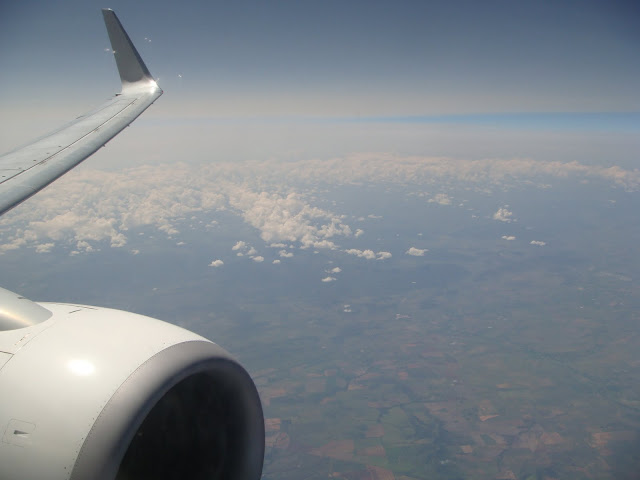 starting the descent into Melbourne
We landed towards the south on Runway 16 at Melbourne after a fairly turbulent approach and then parked at a gate nice and close to the terminal exit. 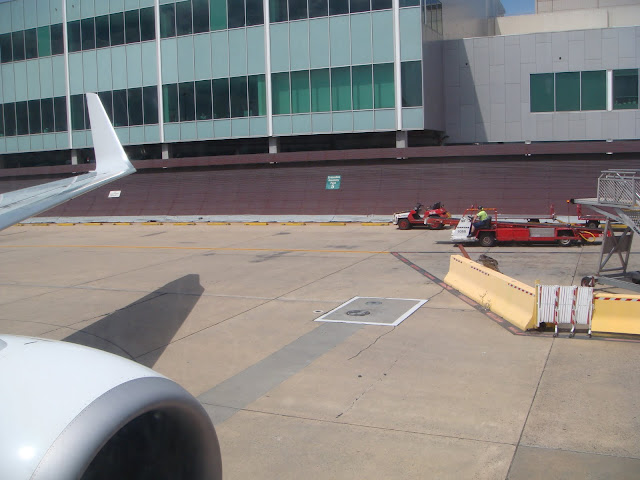