- September 29, 2010
AIRLINE: Jetstar
AIRCRAFT: Airbus A320-200 (VH-VGZ)
CLASS: Economy Class
ROUTE: MEL-BNE
SEAT: 4F
SCHEDULED DEPARTURE: 16.10
ACTUAL DEPARTURE: 16.10
SCHEDULED ARRIVAL: 18.20
ACTUAL ARRIVAL: 18.25
With family up in Brisbane it was time for another visit to the Sunshine State of Queensland. It was school holidays and Qantas was a bit overpriced so I opted for a Jetstar flight from Melbourne Tullamarine to Brisbane, one of 2 daily flight they operate on this route. About 2.45pm, I dropped the car off at Melbourne airports long term car parking and got the shuttle bus for the short ride over to Terminal 1.
Terminal 1 plays host to Qantas Domestic, Qantaslink, and Jetstar. In order to get a seat near the front, I had checked in online but decided not to print out my boarding pass and get one at the checkin kiosk instead. I had no baggage thankfully as the baggage drop off counter queues were very long! The check in kiosks were surrounded by people queuing to drop off baggage but I managed to find my way over to an empty one so I could print off the boarding pass. For some reason there was a system error and I had to go to the service desk to print it instead. With that done, I was away and through security in no time.
From the T1 food court I noticed my aircraft pulling in. Today we would be flying on the 'QuikSilver' A320. 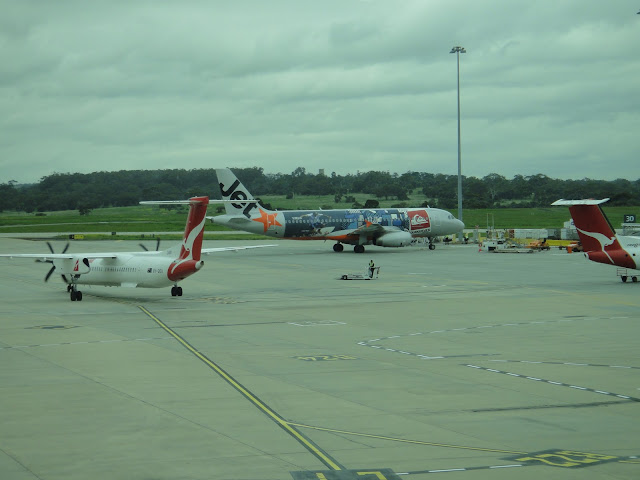 todays aircraft, QuikSilver colour scheme A320-200, a Qantaslink Q400 departs in the foreground 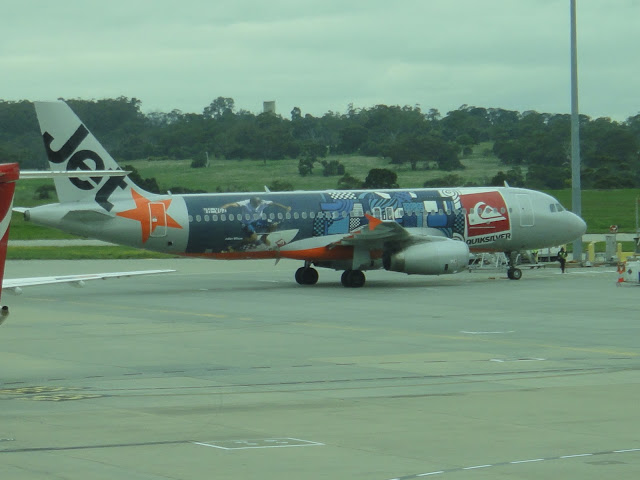 closeup shot
After a quick bite to eat I headed towards Gate 30, which is in the Qantaslink area, with no jetbridge, just a path out to the aircraft. 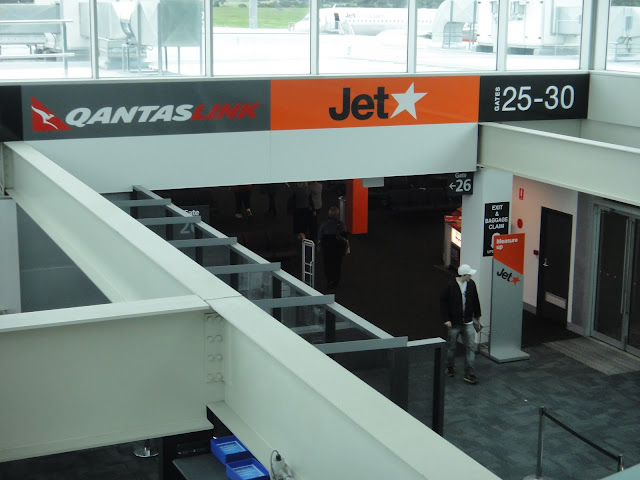 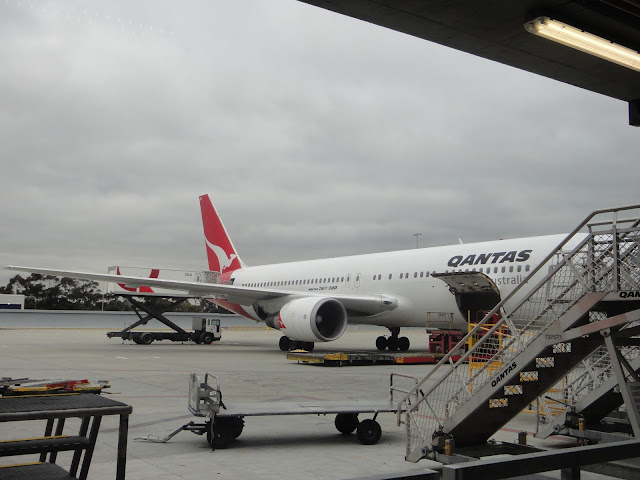 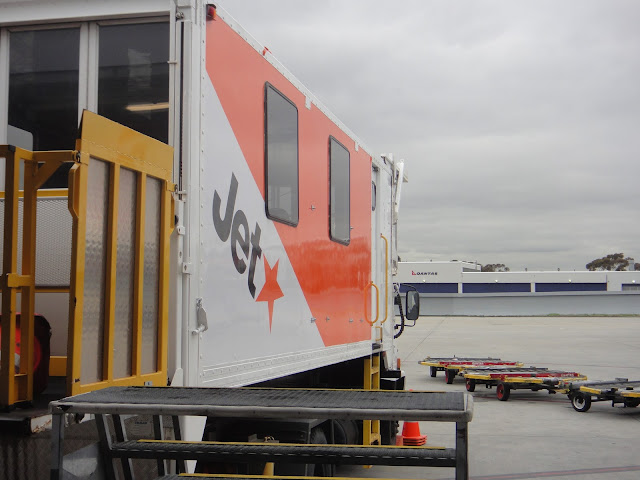 After a short wait the flight was announced and a mass of people swarmed to the queue. The flight would be boarding from both front and rear stairs. I hung back for a while waiting for the queue to clear before approaching, and walking out about 100 metres to the forward steps. 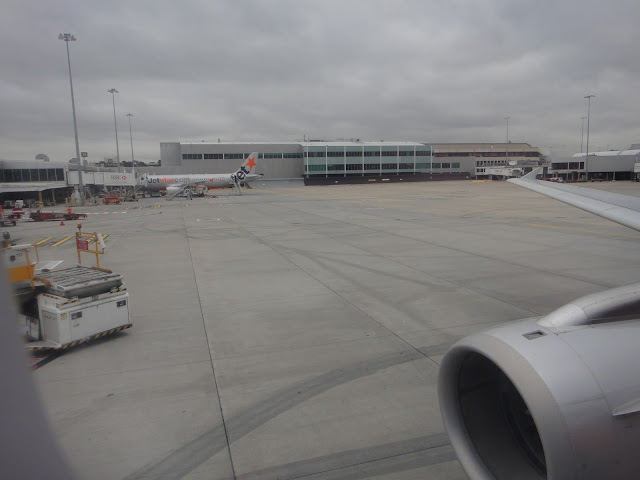 view from 4F, about to pushback
I was welcomed aboard by my quite senior flight attendant of about 50 years old, I suspected she might have been former Ansett crew but I may be wrong. The other flight attendant working at the front was of a similar age, both of them were very cheery and professional. The rear cabin had 2 younger crew members. Although the flight was almost 100% full, everyone took their seat promptly and we pushed back on schedule. Jetstar uses a pre-recorded safety announcement with the crew doing the demonstration along with the audio track.
The taxi to Runway 27 from the Qantas gates is very short so within a couple of minutes we lined up and blasted off into the very cloudy Melbourne sky! 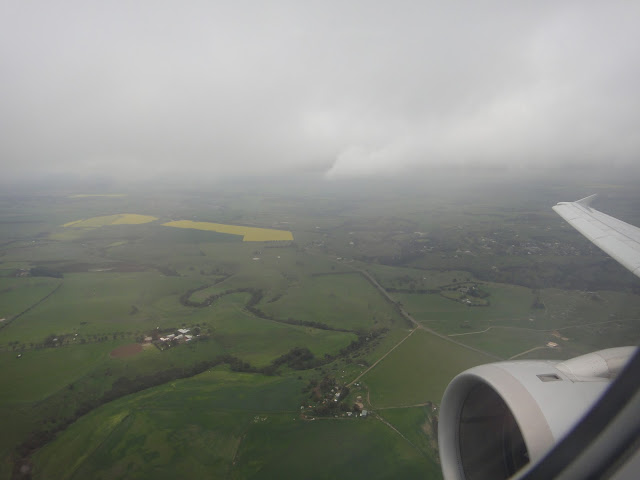 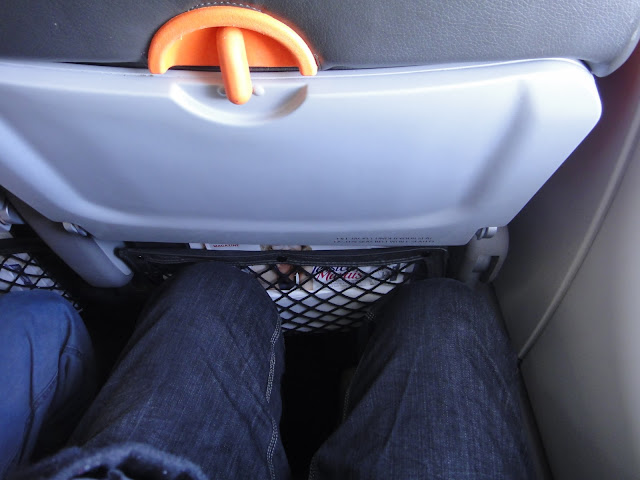 leg room (30 inch seat pitch)
After a few moments we were back in the sunshine above a thick layer of solid cloud which covered most of the state of Victoria. In fact, there was solid overcast cloud for most of the entire journey. The crew came around offering portable video entertainment units, they announced there would be 1 hour and 15 minutes of viewing time available. The cost for those is $10, not really worth it in my opinion. You can also use your own headset or purchase one from Jetstar for $3 and listen to several audio entertainment channels on this aircraft. 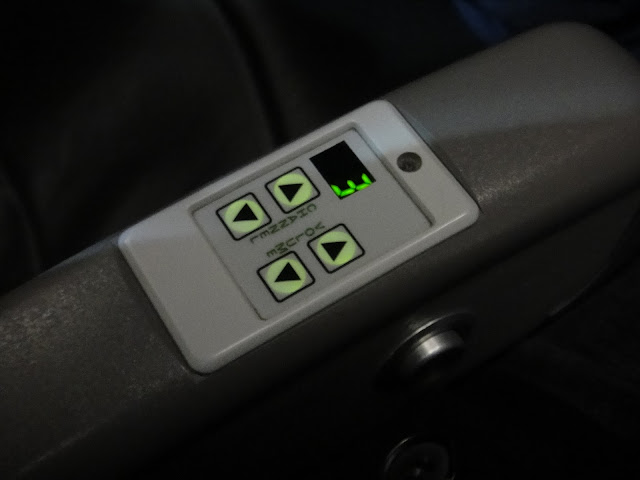 audio entertainment system
Shortly after that the crew came along with the trolley service offering food for purchase. I declined food as I had filled up in the terminal and I dozed off until shortly before top of descent. The captain announced the weather in Brisbane was very wet, and we had been advised to slow down by air traffic control, adding 7 minutes onto our flight time. 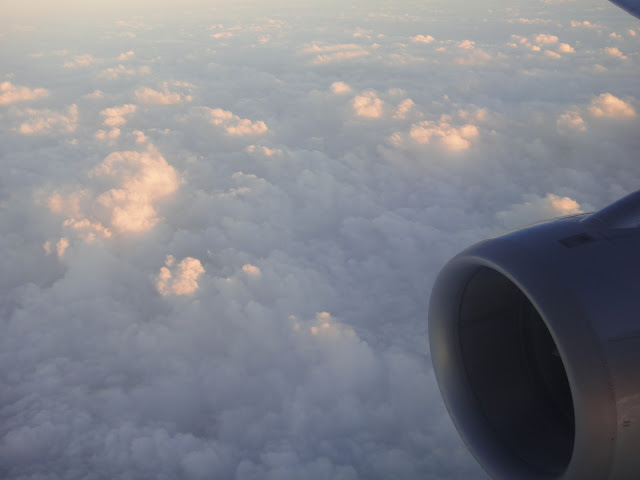 Just started our descent, solid cloud below
The sun was quickly setting during the descent, and as we entered the clouds below it was almost totally dark. During the last 5 minutes of the flight we were flying through heavy rain with loads of water streaming across my window. Despite this, there was only minor turbulence. We made a smooth touchdown on Runway 19 and taxi'ed to a gate equipped with a jetbridge thank goodness! 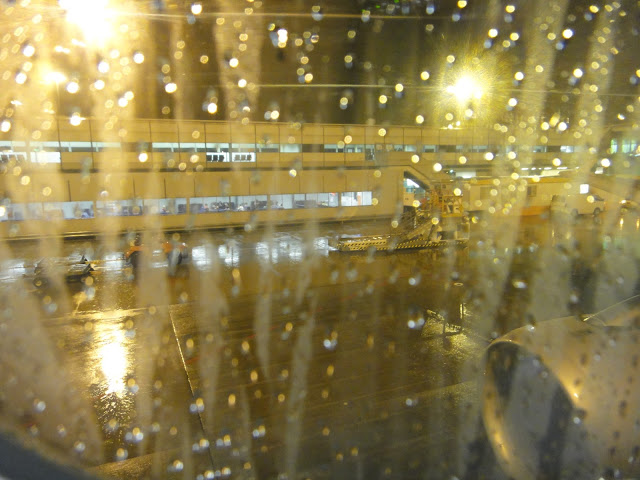 parking at the gate
Overall I was quite content with the Jetstar experience on this flight. The passengers were quite well behaved, the service was professional and the flight was on schedule. I even managed to get about an hours nap along the way! Thanks Jetstar!
Airbus A320 economy class Jetstar trip report