- October 28, 2011
I have reviewed UA840 a couple of years back, but with my Star Gold status renewal running a little short this year I directed a bit of business back in United's direction for a trans-pacific run. Here is a quick run down of the flight once more... pretty much the worst option for Trans Pacific flying, but also usually the cheapest!!﻿

I was taking this trip in the Economy Plus section of the Boeing 747-400, which features 34 inch pitch compared to the 31 inches offered in economy. The first leg of the flight is the short hop from Melbourne to Sydney, and today it was being operated by Boeing 747-400 N174UA. This bird first flew in early 1990, making her 21 years old.

I was at the airport about 90 minutes before departure and the check-in desks were already pretty empty. Looks like a light load for the first sector, which seems pretty common. After visiting the ATM and being refused cash due to my card being blocked i spent the next 30 minutes on the phone with NAB sorting it out whilst boarding was being called. Fortunately they managed to unblock it just prior to getting on board!

I used the priority queue taking advantage of star gold status to board early.


As many of you know, United's Boeing 747-400 fleet still does not feature individual seat back screens in Ecnomy class. Instead you must use the overhead LCD screens. On the first leg to Sydney a short tv show was shown.

Boarding did not take long with a load of about 100 passengers up to Sydney. The friendly crew welcomed us on board and the captain thanked us for choosing United. Sadly though, he did not turn on the channel 9 air traffic control audio feed which is the one thing I love about United.

The weather in Melbourne was windy and cloudy, but the Boeing 747 stayed pretty smooth as we slowly but surely climbed through the murk and finally popped out on top: 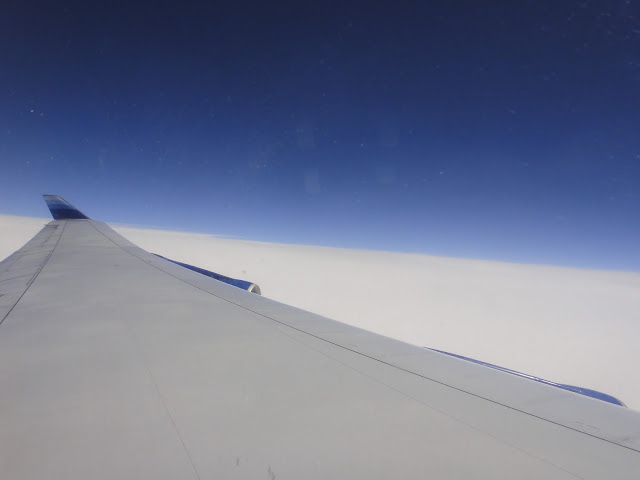 The flight time from Melbourne to Sydney is just over 60 minutes but a drink and pretzels service is offered with complimentary full bar. I took a coke and a full can was offered which is always appreciated. 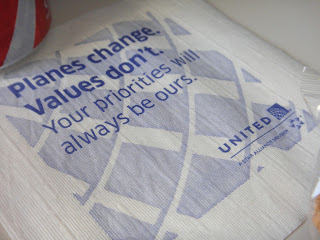 My experience on United tells me that whilst the hard product and catering are very ordinary, the crews themselves are generally pretty warm and friendly. This crew was no different and they always had a smile on their face during this sector. It's a pity that they stand their chewing gum during the boarding process though... could you imagine a Singapore girl doing that? I imagine she would be out of a job pretty quickly.

Soon enough we commenced descent into Sydney and we made our final approach onto runway 34L over Botany Bay.

I made a youtube video of this sector, you can view it below:


Our aircraft made its way over to the international terminal at Sydney and parked right beside its sistership, another United Boeing 747 N175UA.

In my experience the way United works its flights, the aircraft that operates Melbourne to Sydney changes flight number in Sydney and continues to San Francisco. The aircraft that arrived from San Francisco in the morning and remained in Sydney will be the one continuing to Los Angeles. So  basically for passengers continuing on UA840 Melbourne - Sydney - Los Angeles you will get out and swap aircraft in Sydney. Since our flight was on schedule there was just enough time to pop up to the Air New Zealand lounge for a drink and bite to eat. Knowing United's economy catering I think this was pretty much necessary!

I had a beer, some sandwiches and some chicken whilst I was waiting in the comfortable surrounds of the very large Air New Zealand lounge. About 25 minutes later it was time to head back to the gate area to continue to Los Angeles. 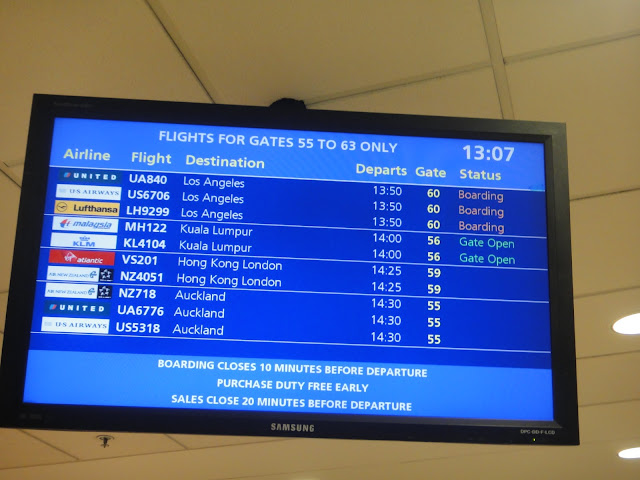 This next sector was a lot fuller than the first with around a 75% load in economy. Fortunately for me I had an aisle seat with the middle seat free. I wasn't going to be squashed like a sardine after all!

With light rain outside we pushed back on schedule and made our way to runway 34L for the long takeoff roll. With almost full tanks the Queen of the Skies makes a slow climb out over the Sydney suburbs before turning east and flying over the Pacific. It wasn't long before lunch was on offer and it was standard United fare. Choice of chicken and rice or vegetarian pasta. It comes with a very basic salad, cake and bread roll. Taste was bland, but fortunately I filled up in the lounge. 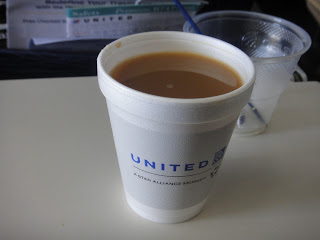 Despite the poor food United still offers a very good selection of complimentary drinks (including alcoholic ones). Coffee was served after lunch and comes in foam throwaway cups like you can see on the left.  At least they hold quite a bit of coffee unlike those flimsy plastic cups other airlines offer on the tray.

I do like that United still offer spirits in individual 50ml bottles (although don't ever ask for more than one at a time!). Included in the selection if Baileys which goes down nicely after the meal with a cup of ice.


With lunch complete we continue north east bound towards the setting sun. The crew on this flight were in no rush for people to close their blinds, but it was soon dark outside anyway. I continued watching movies on the overhead screen whilst some others tried to sleep.

Around 6.5 hours into the flight the crew commenced a snack service which consisted of a tiny roll stuffed with turkey, a biscuit and a drink. Pretty much identical to what I was served two years ago on this flight. The crew offer this service without turning on the cabin lights thereby letting everyone continue to sleep if they choose.

The long and dull journey across the pacific goes on for hours but eventually we were 90 minutes from landing when the breakfast service started. Again, a very simple meal and nothing like the breakfasts you would see on Thai Airways in economy. There was 2 choices, eggs or fruit salad. I took the eggs which was just egg, potato and mushrooms (no meat) along with a croissant, which did not even come with jam! Really ordinary breakfast and most people barely touched it. United catering really is damn awful in economy class! 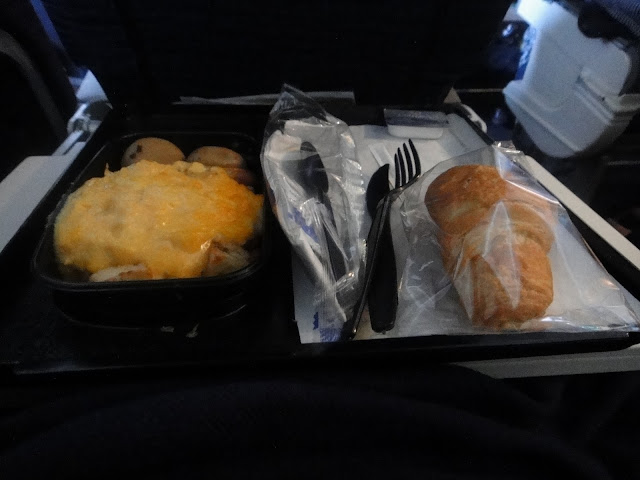 With breakfast completed at 39,000 feet we were slowly approaching the US coastline:

The captain made an announcement about the weather in LA which was suffering from fog at the time. We descended through some heavy rain showers and made an approach through the fog with the ground appearing just a few seconds before touchdown. We were actually a few minutes ahead of schedule as we parked at gate 7 and the rush for the front door started. Timing was good as the immigration queue was empty and I made it through in less than 5 or 10 mins.

Thanks for taking a look at my follow up review to United 840.  This flight serves it purpose well, a cheap way of getting to the US with no frills! At least they are prett reliable and have daily departures from Melbourne. It's also a cheap way of accumulating star alliance miles with almost all UA fares being mileage earning... even the deeply discounted ones.

Up next I will review a few domestic sectors I took whilst on this trip in the USA.