The world of Australian domestic aviation has changed recently. The once proudly low cost Virgin Blue has new management and a new direction, relaunching as premium airline: Virgin Australia. It's a gradual change but already we are seeing the new logo gradually being applied to the existing fleet, the introduction of two new aircraft types (the A330 and ATR72), and possibly most importantly, the introduction of domestic business class.


So, how does an airline that never offered a business class product before prepare to launch the service? Well, one thing it can do is have test or sample flights where the crew can perfect the product and timing of services. It is one thing to operate business class on 4 or 5 hour flights to Perth, but completely another when you have barely 65 minutes in the air such as between Sydney and Melbourne. I just so happened to be a participant of one such test flight, operated by an A330-200 on the Sydney to Melbourne run. This is how they went....

A friend had kindly driven me to the airport and we made use of the premium curbside entry in Sydney which has dedicated security and delivers you directly into the lounge without having to step foot in the main terminal. What a fantastic concept, I love it! It is available for business/premium economy passengers as well as gold and platinum frequent flyers.

Being a Saturday evening and on one of the last departing flights it was extremely quiet with nobody else in sight as I checked in at the desk. The lounge receptionist informed me my flight was delayed 30 mins as she checked me in and I was handed my boarding pass for seat 1A. I proceeded through security which was staffed by 4 people and I think they can't have been screening more than 10 people in the previous hour. What an easy job!


The Sydney lounge is yet to undergo renovations to bring it up to the new standard as seen in Melbourne and Brisbane, but the premium entry more than makes up for it. It is still quite comfortable and there was a reasonable selection of cold meats, cheeses, bread, soup and dips to choose from. The bar had quite a good range of beer and wine and the barista service is available all day which is something that Qantas should definitely implement.

Being a Saturday night I felt sorry for the lounge staff with our flight (the last of the day) being 30 minutes late, meant they would be staying back late too! They did start to pack up the buffet as the clock approached 8pm, with one of them coming to ask if we needed anything else before they did. I decided to head to the gate before the boarding call was made as I wanted to take a photo of the aircraft.

As I arrived at Gate 40 boarding had just commenced and I made use of the dedicated priority boarding queue. All passengers were boarding through the forward entry door which was connected to the jetbridge for this flight. I showed my boarding pass to the flight attendant at the entry and she warmly welcomed me on board and greeted me by surname directing me to my seat. I do like the greetings by surname, on any airline, I find it highly professional and courteous.

The aircraft interior was refurbished into Virgin colours but I believe the seats are the same as Emirates just with new leather covers. Although not angled lie flats they are still quite comfortable with huge seat pitch and very generous recline. On a flight of under 5 hours I would say they are very comfortable.... and certainly superior to the Qantas 767 domestic offering. Each seat also has video screens available with many different channels running on a loop system. I expect audio video on demand will be a feature on the new build A330's that Virgin receive in the future. 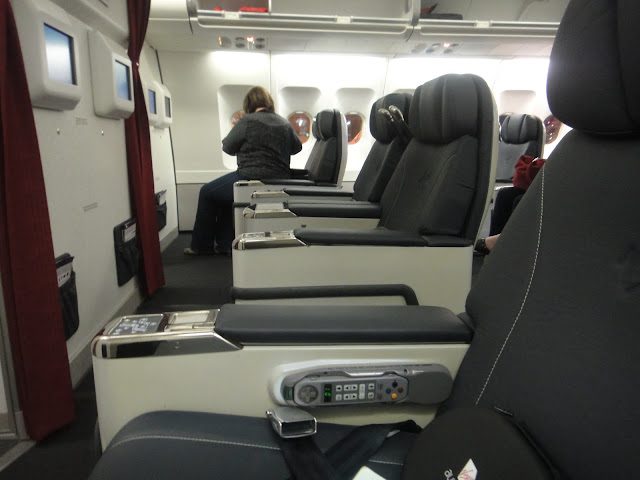 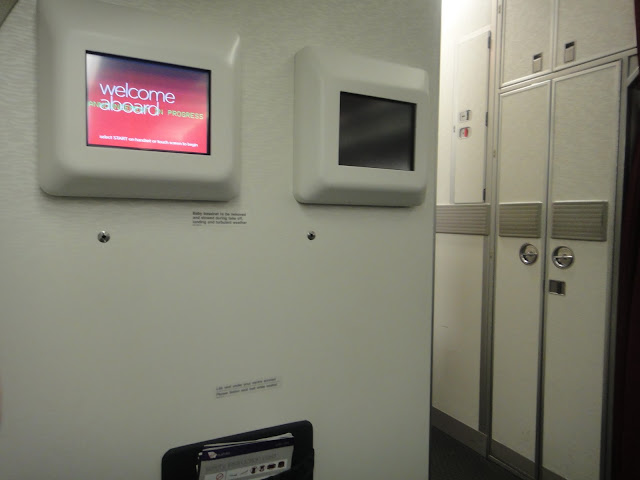 As I was being seated a Virgin staff member came to see me and addressed me by name again (in fact I was addressed by my surname throughout the flight which was very impressive). This staff member was not a part of the cabin crew but he was on board to get feedback from the passengers about the new service. I was given a survey and pen to fill out. Shortly after a male member of the cabin crew came and offered either water or the Luke Mangan signature mocktail as a pre-takeoff drink. I took the mocktail which was kind of spicy but very delicious. 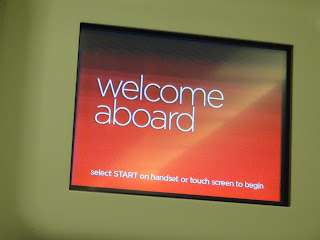 Business class was completely full, mostly of status passengers and presumably those on premium and flexi fares. As the cabin filled up the crew came around and offered newspapers.

The entertainment system was not yet available but boarding was pretty quick and we were soon pushing back from the gate. An animated safety video played with a single crew member standing in the aisle to point out the exits at the appropriate point of the video.

Once the video was complete the cabin was dimmed and we headed for runway 16R and departed to the south. There was a little light turbulence as we climbed into the night sky and everyone got comfortable.


Soon after takeoff there was a PA which was played only in the business class cabin welcoming us on board and explaining the services available on board. Shortly after I could faintly hear a similar announcement coming from the economy cabin behind us explaining the buy on board food options. Just after the PA the entertainment system started up. I started watching an episode of the Simpsons while I waited for dinner... and we waited.... and we waited....

I'm not sure exactly what the delay was but as you can see in the above photo - it was quite some way into the flight before dinner service commenced. I would have assumed that the hot meals would be in the oven on the ground so that they could start service as soon as the crew could get up from their seats. Anyway, eventually a trolley appeared in each aisle with 2 crew on each of them. There was 2 options, one of them was vegetarian and the other was Moroccan Lamb. I chose the lamb and it was presented on a single tray as you can see below: 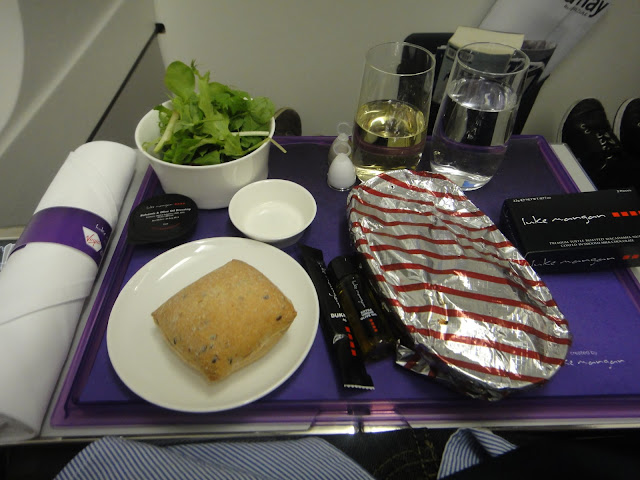 First things first... why the aluminium foil? That is VERY economy class I'm afraid. I believe the foil should be removed by the crew just prior to presenting the tray to the passenger. The bread was offered from a basket shortly after the tray was placed on the table. Also on offer was either red or white wine, and either still or sparkling water. No other drinks were offered although I guess they were available?

The tray consisted of a green leaf salad with vinaigrette, bread with olive oil and dukah, a box containing two chocolate covered macadamia nuts and the main course. Can I firstly say the bread with oil and dukah was very nice! Bread was fresh and quality seemed really high. The salad though was very dull, nothing but leaf. I guess that's pretty standard though.


Unfortunately the lamb main course left a lot to be desired. It was simply too dry, I guess the high altitude doesn't help things but it needed to be more saucy. By the time it hit my tray table there was very little sauce at all, and with all that cous cous you need some! It was edible, but only just. Luke Mangan - please fix it!

By the time the crew had served the last row of business class our descent was commencing  and the crew came to remove my tray. There was NO top up of wine, and NO tea or coffee service. I know this is a trial service so they are certainly allowed to make mistakes but I think by this stage of the flight Qantas would have offered more wine, more bread and coffee. Something for them to work on, and I certainly mentioned it in the survey I had been given: 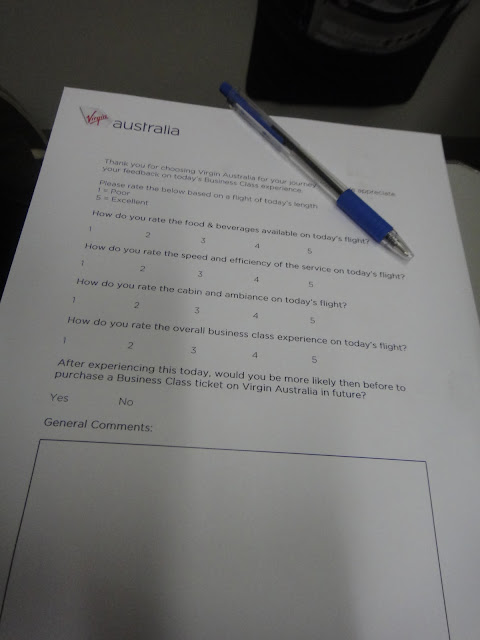 A few moments later the seat belt sign was illuminated and it was time to bring the chairs back into the upright position and prepare for landing. 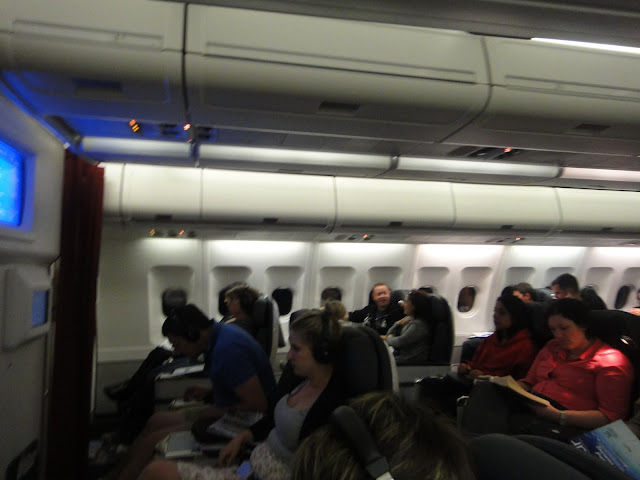 We made a standard approach onto Melbourne's runway 16 with a relatively smooth landing. We made our way to the A330 gate at the Virgin terminal where the jetway was connected to door 2L. The cabin crew were on hand to ensure the economy class passengers allowed business class to exit first, this is certainly appreciated.

Overall it was a good experience, they just need to work on the quality of the main course and the timing of the service. The crew really need to be up and serving dinner as soon as possible on these short flights. And somebody walking through the cabin with wine bottles for top ups would certainly be appreciated. My other gripe is the width of the business seats, have a look at the last picture above - the seat really is pretty narrow. With the terribly awkward position of the handset built in against your leg you will find the tv channels changing if you move your leg at all. Seating in a 2 x 2 x 2 arrangement would be better, with a bit more seat width please. Or at least move the handset location.

I absolutely can not fault the customer service at ALL stages, both at the lounge, and on board. The staff were exemplary at all times, and highly professional. There was NO funny business which Virgin had been known for before (like making jokes over the PA). This was greatly appreciated by me. If Virgin keep this up they just might win me over from Qantas, at least part of my travel may head their way anyway.

Now, if only they would just join Star Alliance!