After a pleasant overnight stay in Bangkok it was time to continue my journey on to Tokyo Haneda. This next flight was one I was particularly looking forward to as it was on the Boeing 777-300ER with suites in First.  The taxi dropped me off at Door 1 at BKK and I made my way into the First Class checkin zone which is a private zone with lounge seats you can sit in whilst the check-in staff take your bags and get your boarding pass. At the same time I was shown a seatmap for the B777-300ER and asked if I still wanted my pre-assigned seat 1A. I was also offered to make an appointment in the spa which I did for 1 hour 30 minutes prior to departure. ﻿

With check-in formalities complete a staff member assisted me with my cabin baggage and escorted me through security and passport control and down the escalator to the first class buggy for my ride through to the lounge.


As I arrived in the lounge I was escorted in and my request for a private room was granted. I made myself comfortable in my own little lounge with TV, lounge suite, chair and table. It was most pleasant indeed! A menu was brough to me and drink orders taken. Moet is the champagne on offer which I selected along with a glass of Perrier. A kind of cold tea drink was offered as well.

I ordered the wonton noodle soup and fried rice with chicken for my lounge lunch. They are made to order but were presented within just a few minutes.

After my rice I walked to the buffet area and checked out the dessert options. I selected an apple pie and banana tart and was told to return to my seat and they would bring it out to me. Sure enough a few minutes later my chosen items arrived on a plate and my Moet was quickly replenished.

It was soon time for my spa appointment and I was escorted to the Spa by one of the lounge attendants. As I walked in I was immediately greeted by name and taken to the waiting area where a cold towel and tea were provided. Just moments later I was taken for the full body aromatherapy oil massage. A quick shower after that and I was on my way back to the lounge for one last glass of Moet before departure.

I'd only got down half a glass of champagne before one of the lovely Thai Airways staff came and collected me and one other passenger. I expected a buggy ride for the lengthy walk to gate C7 but instead we had to walk! To make matters worse the flight was yet to start boarding and I was forced to hang around the gate area for a good 10 to 15 minutes before I was allowed on board. Must have been some sort of miscommunication somewhere as I thought boarding would have been near to complete by the time I arrived at the gate. At least that's how it was last time I flew Thai in First out of Bangkok.

Eventually it was time to board the Boeing 777-300ER which at the time of this flight was 4.5 years old and had already flown with 3 different carriers. It was originally delivered new to Jet Airways of India before they decided to lease out several aircraft that were surplus to their needs. The next operator was Turkish Airlines and when that lease ended Thai Airways took delivery of it in July 2011. It is one of five such aircraft currently operated by Thai but owned by Jet Airways. Thai use them mostly on flights to Tokyo, Paris and some other European destinations such as Frankfurt. Today's aircraft had just come in from Paris and was delayed due to the late arrival of that flight.

I was warmly welcomed on board and shown to my suite 1A. I was really happy with the seat, which was huge and although it showed a bit of wear and tear it was very comfortable indeed. Within moments a crew member came to ask me what drink I would like, and I opted for the Dom Perignon. A bottle was presented and poured at my seat a minute later. The inflight supervisor then came and personally welcomed me and advised a flying time of 5 hours 20 minutes.

Shortly afterwards menus were delivered and blankets were handed out. I was happy to see a proper duvet style blanket which was a huge improvement over the flimsy economy style blanket I had been offered the day before on the flight from Sydney. I hope these blankets will be the usual in Thai First from now on. But blankets are just one thing that Thai manage to make extremely inconsistent!

Pushbank commenced at 3.29pm, a further 9 minutes behind the already advised 30 minute delay. I did manage a second glass of Dom before the glasses were put away though.  The usual safety video was shown and we were soon powering down runway 19L at Bangkok. I really noticed how quiet the 777-300ER is from Row 1 on this flight.

Shortly after takeoff a round of drinks was offered and I had a vodka martini with a glass of water. A selection of nuts was also provided. 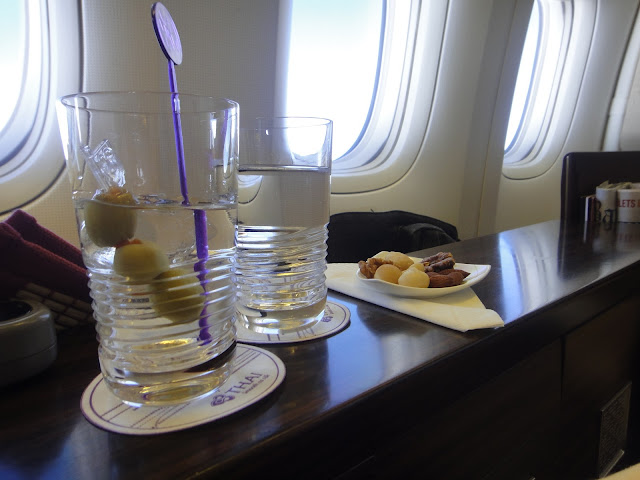 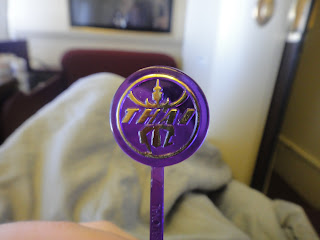 I do quite like the retro style drink stirrers they provide. I decided to start watching the remaining episodes of Downton Abbey season 1 that I hadn't watched on the previous flight. Despite having seen this series many times before I just never get sick of it. Definitely my favourite show right now!

The meal service then followed and is best explained simply by showing the pictures: 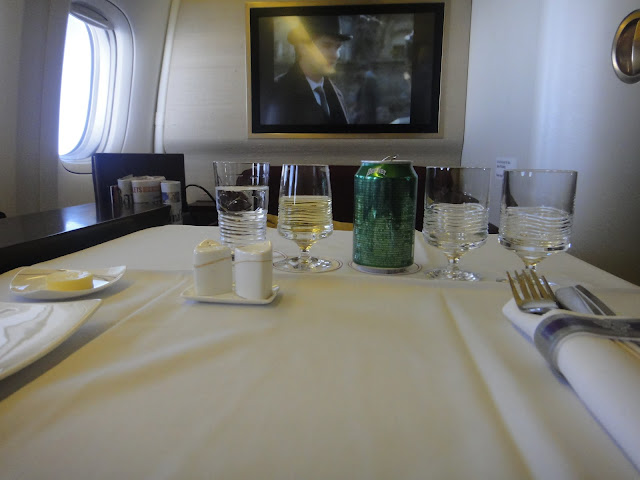 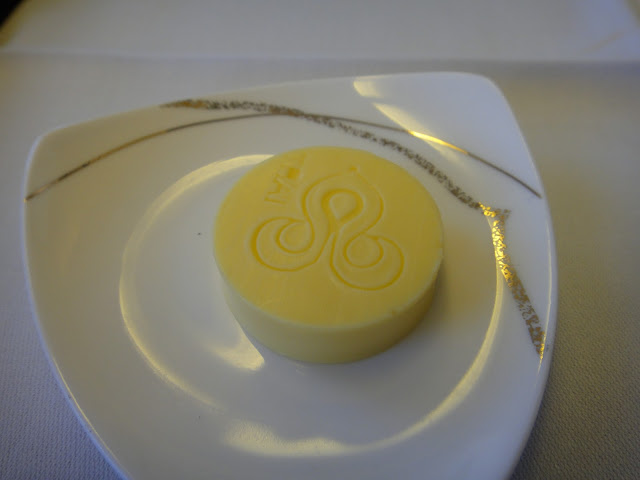 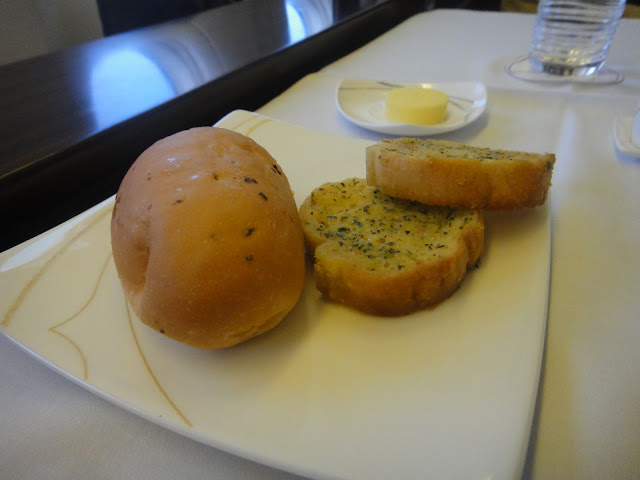 ﻿
After the main course it was time to visit the bathroom, you can only drink so much wine and champagne before it becomes quite necessary!

On the way back I spotted the fruit and cheese trolley being prepared: 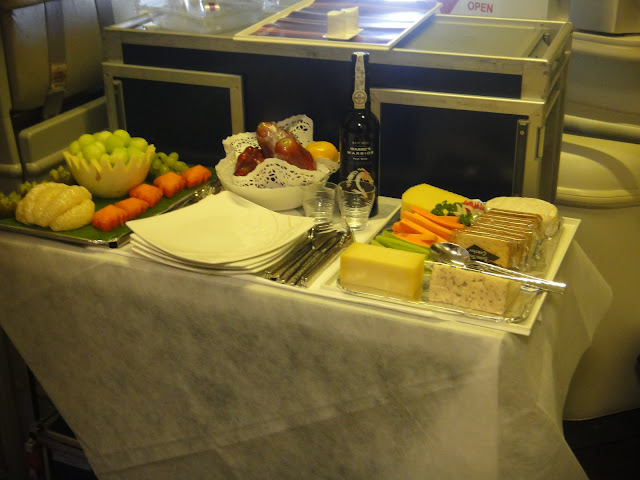 I opted for a mix of fruit and 2 of the cheeses along with some crackers... I had opted to continue with the Dom Perignon rather than any of the red or white wines on offer. 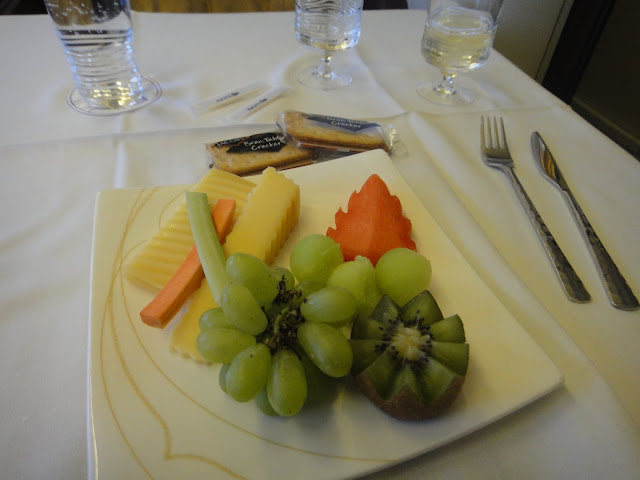 After the HUGE meal and loads of Dom Perignon I was absolutely bursting and also feeling quite sleepy so I decided to close my suite doors and take a nap in the fully flat bed. The seat converts into a bed without any need to stand up. It is a very comfortable and feels like quite a private arrangement with the doors closed. This is as comfortable as I have ever been on a plane, I could quite happily sleep here for many hours. I only had 2 hours or so but I slept very soundly. 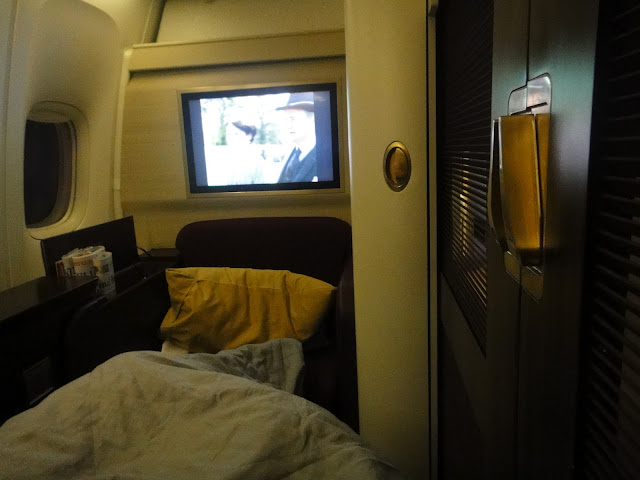 Prior to the top of descent I was offered drinks and given the arrival card for Japan.


The descent and landing were standard and we made our way to a remote parking spot where two sets of covered airstairs were waiting for us.  This ended the first class experience at Tokyo. There was no special treatment for the arrival, it was onto the bus with everybody else and make your own way through passport control. I was subjected to a full baggage search and questioning by Japanese customs, apprently I fit some profile that warranted it! However it only took about an extra 10 minutes and I was soon on my way into the arrivals hall where my driver was waiting. 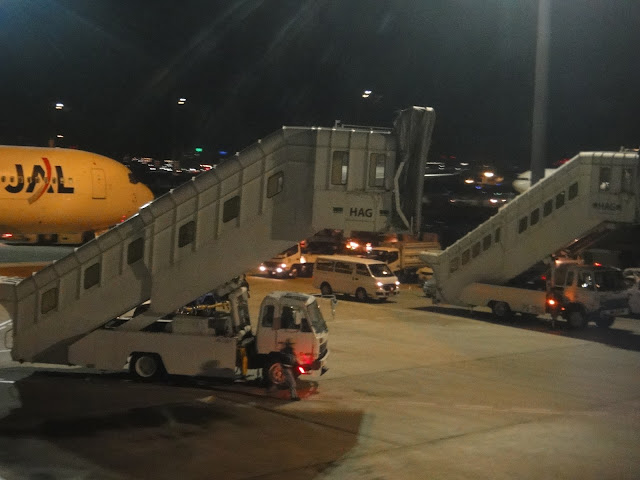 Overall it was probably the best flight I have ever taken (keeping in mind my First Class flying experience is reasonably limited). The food was very tasty and the Dom Perignon was flowing the whole way. Service was good on board, and it was certainly excellent on the ground at Bangkok. Well done Thai!