- July 10, 2012
After last year's Royal Wedding trip, I decided to be in London during the celebrations for Queen Elizabeth II's diamond jubilee. My route to Europe on this trip was relatively simple. Melbourne-Bangkok-London Heathrow, all on Thai Airways in business class. Here is how the first sector went:

It was a miserable day in Melbourne for my departure. Freezing cold, raining with heavy low cloud. I arrived at the airport by Skybus and made my way into the international departure hall. I was nice and early and check-in was pretty quiet. Check-in was processed quickly and I was handed my boarding pass for seat 15K on the Boeing 777-300. This was a flight I had taken many times before so it was all very routine. 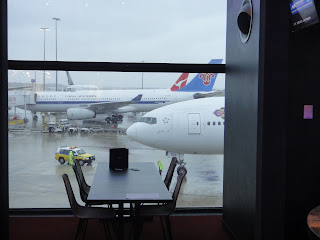 Once I made my way through passport control I noticed our inbound flight was stopped short of the gate. The ground crew were standing in the rain with their headset connected to the aircraft. I wondered what had prevented the crew from taxi'ing right in. A short time later a tow truck arrived and towed the aircraft the remaining 50 metres or so to the gate. I have no idea what the problem was but fortunately it did not delay the flight back to Bangkok.

After taking the above photo of my aircraft I proceeded downstairs to the ground level and the Air New Zealand lounge. Food offerings weren't particularly exciting, I ended up with a couple of sausage rolls and a sparkling sauvignon blanc to go with it.

Whilst in the lounge I was paged by the receptionist. She had the Thai check-in staff on the phone for me. I was a bit surprised they would want to talk to me but it turns out they just wanted to make sure I was OK with my seat selection. I had originally selected a bulkhead window online but at check-in I changed it to 15K to ensure I would have a vacant seat next to me. I told the friendly staff member of my reasons and she wished me a pleasant trip. It's nice that they went to the trouble. Boarding was soon announced in the lounge, and I went upstairs to find this: 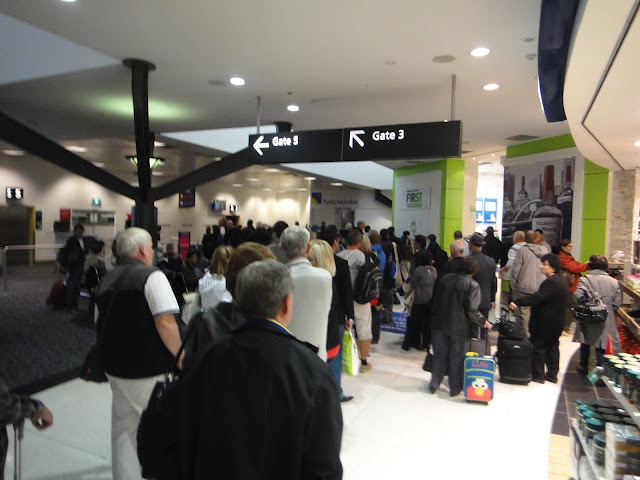 It turns out boarding was not yet underway and there was a large number of people queued up waiting. This was abnormal, normally the lounge has it right and you would walk straight on through the priority queue. Anyway, after about 5 or 10 minutes boarding commenced and the staff ensured those who were entitled to priority boarding received it. Now.... the flight! 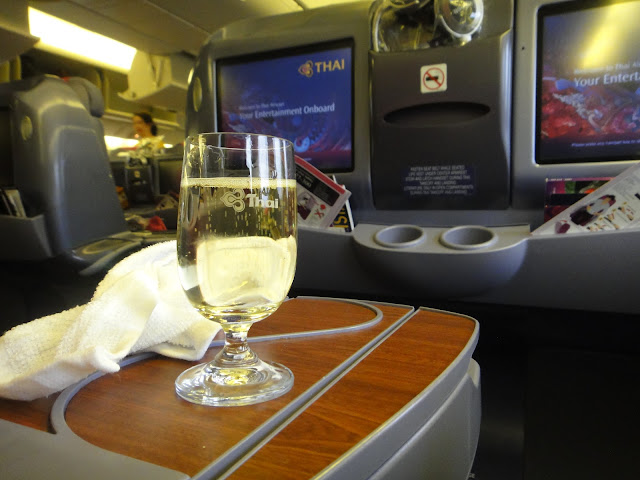 Once on board I took my seat in 15K and was promptly offered a hot towel and drink. As is the usual with Thai in business class, there was no name recognition. This is something that I think could be improved upon, especially after a recent flight in Qantas Premium Economy where I was always addressed by name during service and also offered a personal welcome on board. There was already a headset and amenity kit on the seat for me. I was pleased to see a thick, duvet style blanket as well. 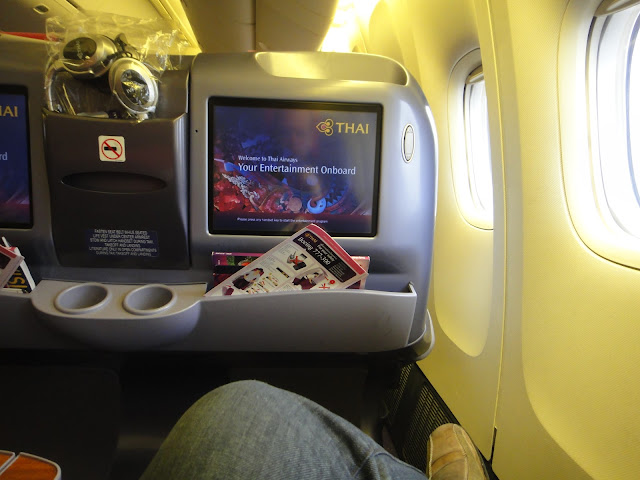 After a long period of time waiting for a takeoff spot we eventually roared down runway 16 and into the cloudy sky. It took quite some time to finally climb above all that cloud. Once we did the crew sprung into action and commenced service. I have reviewed this flight many times before and nothing much changes so here is how the meal service went: 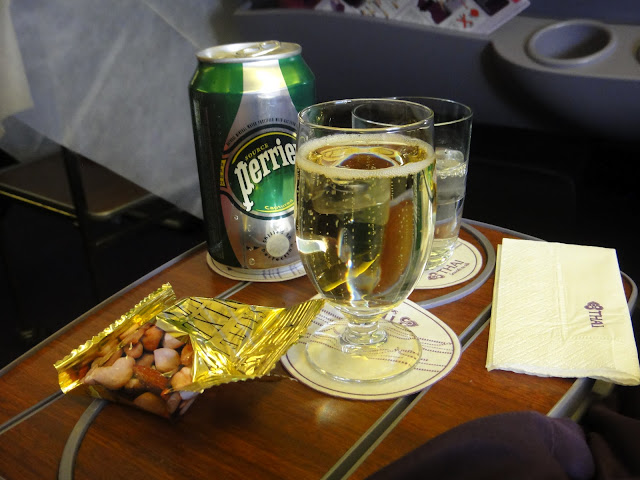 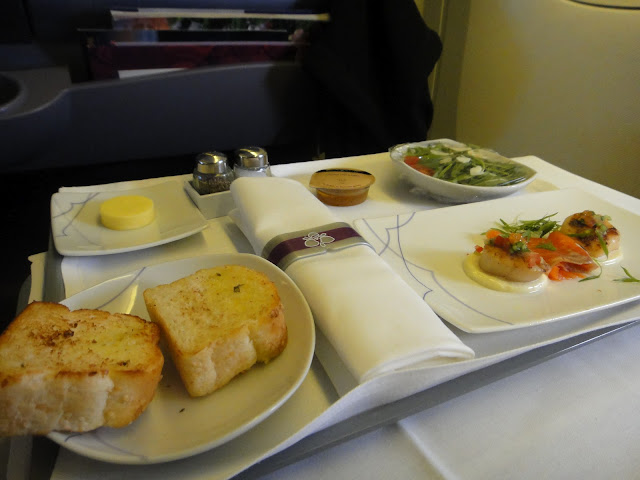 I fell asleep after the cheese course so I can't remember what dessert was on offer. I was pretty full anyway and didn't really need it. You certainly get quite a lot of food anyway. There was plenty of top ups on the bread and drinks throughout. No complaints there. Once the meal service was complete I watched a movie and took a nap. I woke up for another movie and rang my bell which was promptly answered. I ordered some more nuts and a coke to go with the movie, this was no problem.

Eventually it was about 90 minutes to landing and the second meal was offered. This is a lighter meal offered on a single tray. It consisted of noodles with prawns, fruit and chocolate.

All the food on this flight was tasty and of the usual standard I expect ex-Melbourne.

The sun had set outside and it was time to make our descent into Suvarnabhumi airport. We landed pretty much on schedule and I was NOT surprised to see we were headed to a remote stand yet again. This seems to happen to me on at least half my arrivals into BKK with Thai Airways. Anyway, it was out into the steamy heat of Bangkok and immediately into an air conditioned bus for the 10 minute trap back to international arrivals.

So, there you have it... the first leg down, many more to go! Stay tuned
Boeing 777 business class Thai Airways Thailand trip report