- August 07, 2012
After a short stay in Bangkok it was off to London on Thai once more. I started my trip with a foot massage, complimentary for Thai business class passengers in the Thai Airways Spa at Suvarnabhumi airport. It's a great way to relax between flights, or a great way to relax in preparation for your first long haul flight of the day. You start off in the waiting area with a cold herbal drink and cold wet towel.

﻿
With plenty of time up my sleeve I decided to 'lounge hop' and once my massage was complte I made my way over to the Singapore Airlines lounge in A concourse. There is pleasant garden views and I filled up on a few snacks including some tasty dim sum along with a vodka orange.

After I was done with the SQ lounge I made my way to Thai's lounge on concourse C, which was closest to the departure gate. I found a window seat with runway and apron views and snacked on some green curry chicken fried rice and a pastry along with some ginger ale. 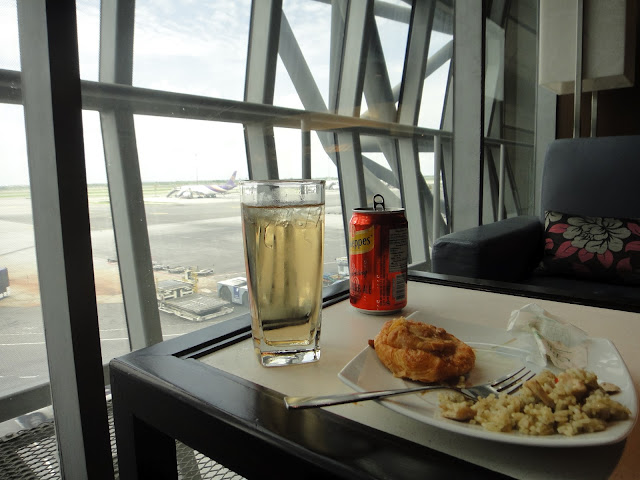 It was nearing boarding time and with a long walk down to gate C10 (the last one of the concourse) I lef the lounge giving myself plenty of time. I approached gate C10 and noted my aircraft, an Airbus A340-600 was ready at the gate. Today's flight was being operated by HS-TNE, a 6.5 year old example which was delivered new to Thai back in December 2005. 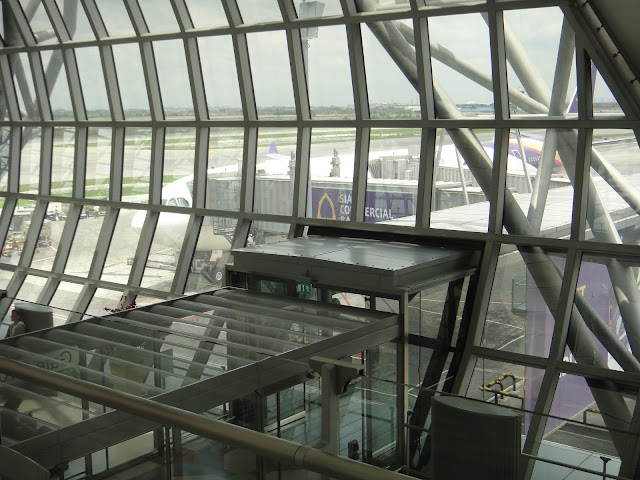 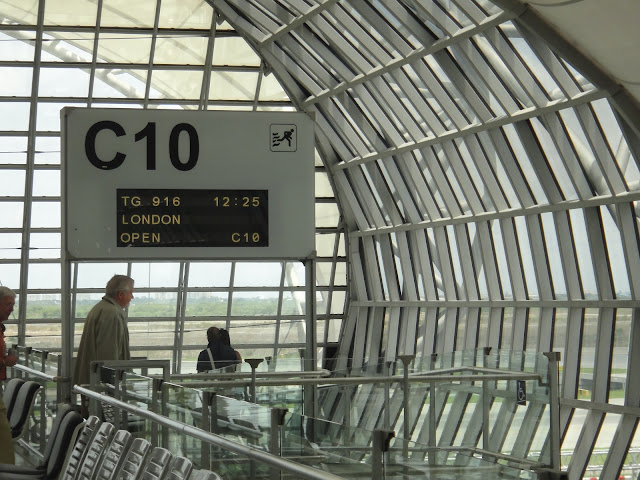 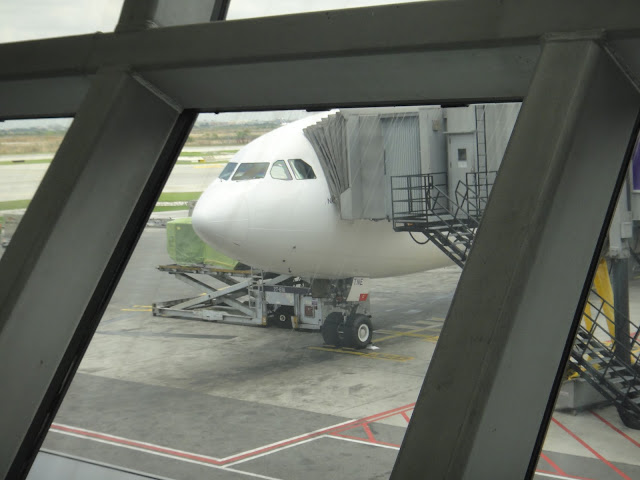 
I was warmly welcomed on board and made my own way into the second business class cabin to bulkhead seat 18K. The second cabin tends to be a little quieter in terms of passenger load and is a little more intimate. I was glad to have the seat beside me remain vacant.


As usual pre-takeoff drinks came around and I selected the champagne. Hot towels were also provided. 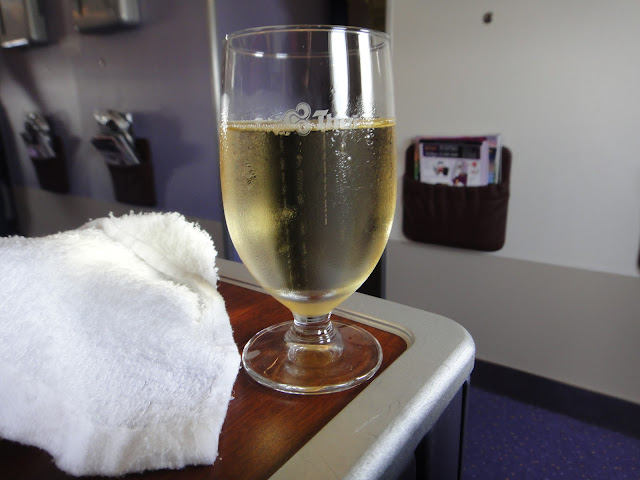 I took a moment to peruse the menu although I had felt like duck prior to the flight so had used the Thai website to pre order a duck on rice dish. 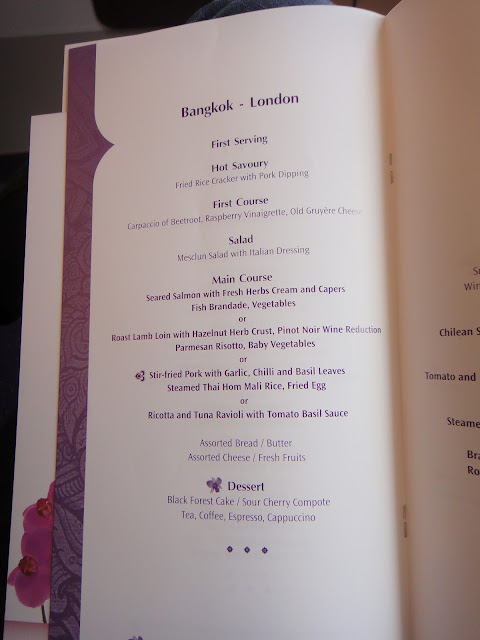 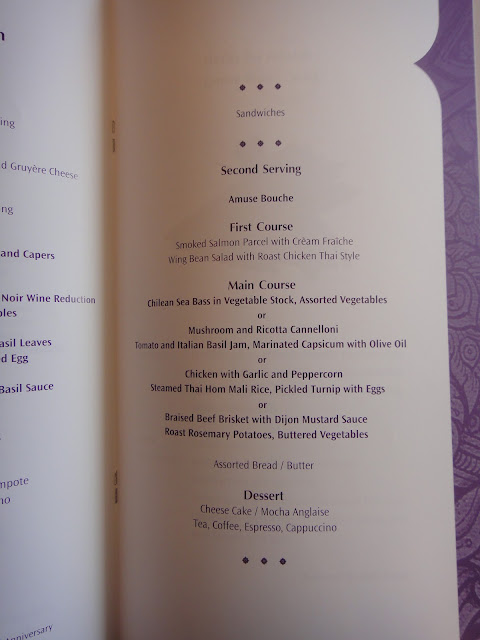 I'd probably have gone with the lamb had I not pre ordered the duck. Anyway, about 15 minutes behind schedule we pushed back and made our way to runway 19R for takeoff passing lots of interesting aircraft along the way. 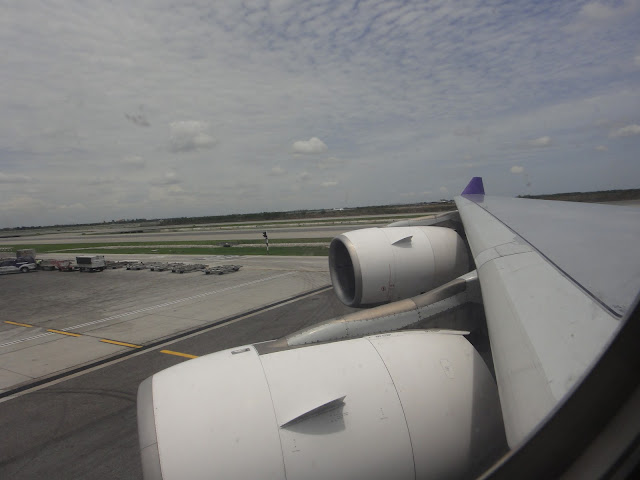 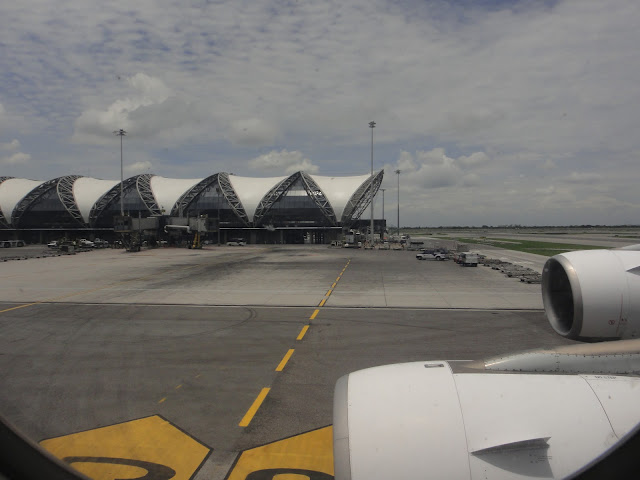 After a really long takeoff roll we were airborne and slowly climbing away towards the south. Soon after we made a right turn and started tracking north west past the CBD of Bangkok. 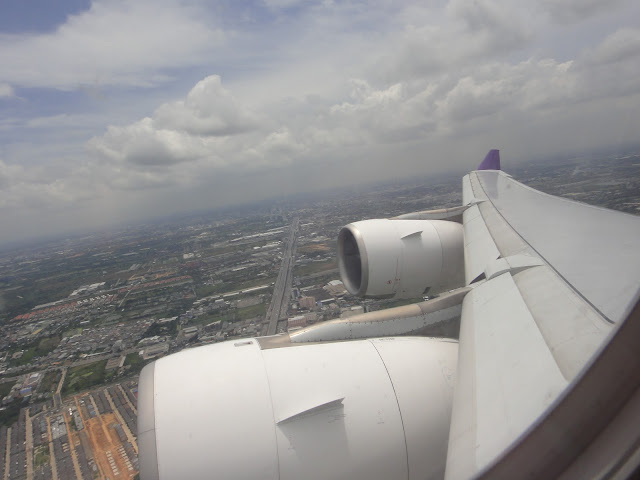 Once we were safely above the weather the captain turned off the seat belt sign and the crew were up and about distributing packets of cashew nuts and offering drinks from the trolley. I started with a vodka and ginger ale. I do wish the glasses on Thai were a little larger, the ones they provide are really tiny in my opinion. 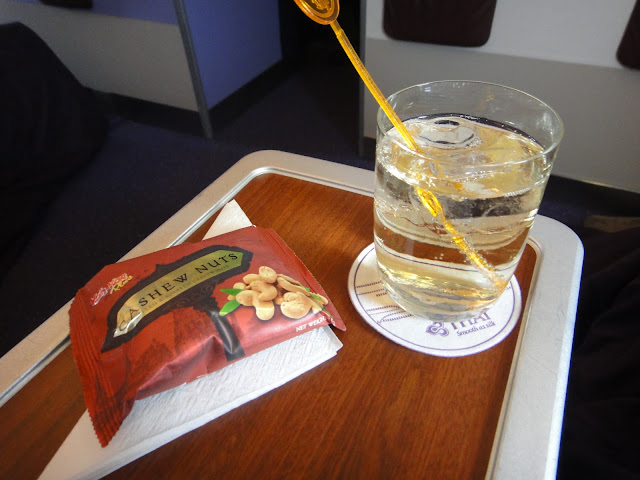 A rice cracker snack came out with a thai style pork on top. It was pretty tasty really. 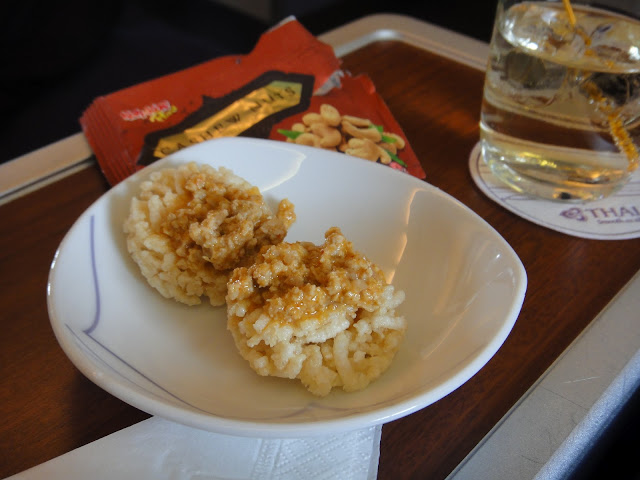 The starter was a beetroot and cheese dish which I had never come across on Thai before. I normally expect a salmon, prawn or scallop type starter but the beetroot was actually quite tasty. The accompanying salad came with a nice balsamic and olive oil dressing. Bread was on offer and I had a  roll plus garlic bread. As is usual with Thai the bread basket came around several more times during the lunch service. 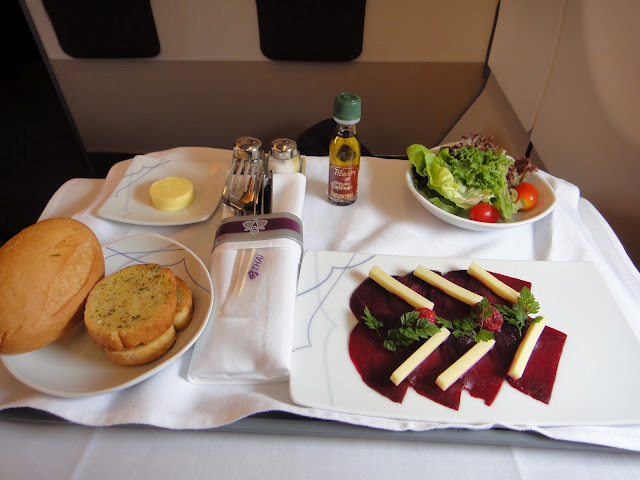 After the main course the pre prepared tray of fruit and cheese was offered. I would prefer to be able to choose my own cheese and fruit as I don't like camembert and it seems a waste. 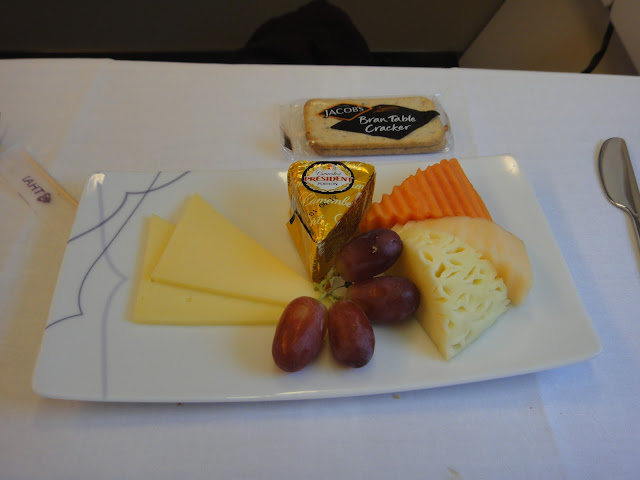 The finishing touch was a cappuccino and black forest cake. It was actually really tasty! 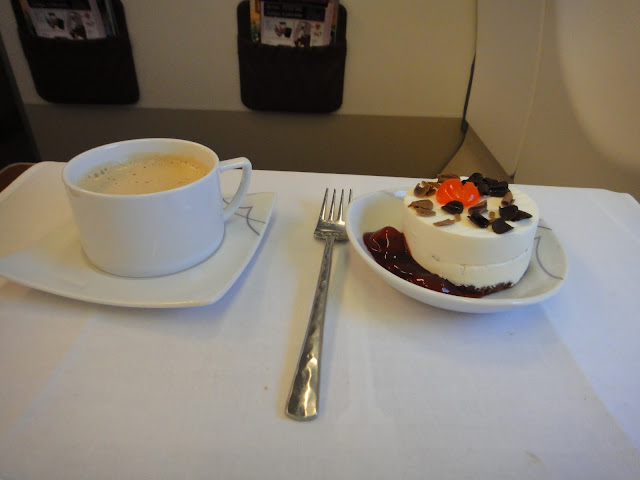 By that stage we were flying over India and I noticed we flew quite close to Delhi. I decided to sit back and watch a movie and nap for a while. I took a few snaps now and then, it was daylight outside the whole flight, but the cabin was dark with all the blinds down. 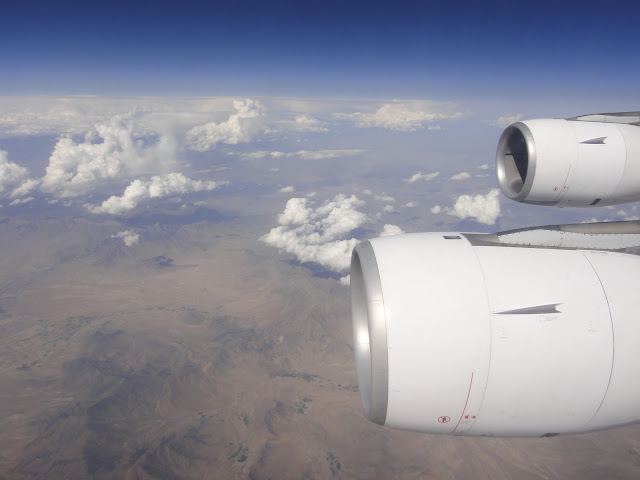 Halfway through the flight I had a sandwich and more nuts: 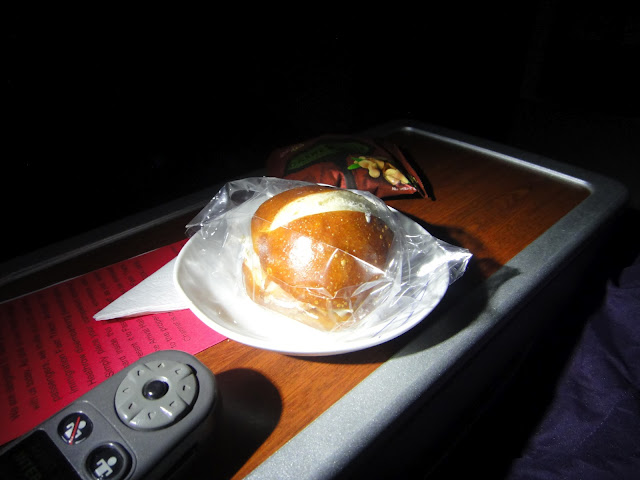 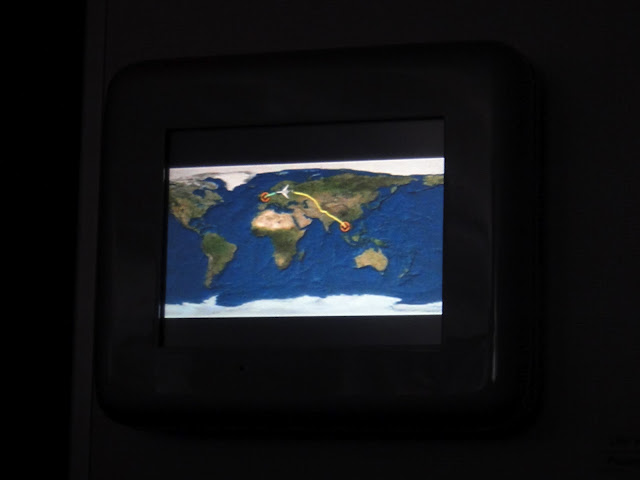 Over Eastern Europe and it was time for the second meal, or dinner really.


The 12 hour journey was rapidly coming to a close and we soon heard from the cockpit crew. Weather in London was looking fine but we could expect a few minutes of holding before landing. I think it turned out to be just 1 or 2 circles before we continued on our way. 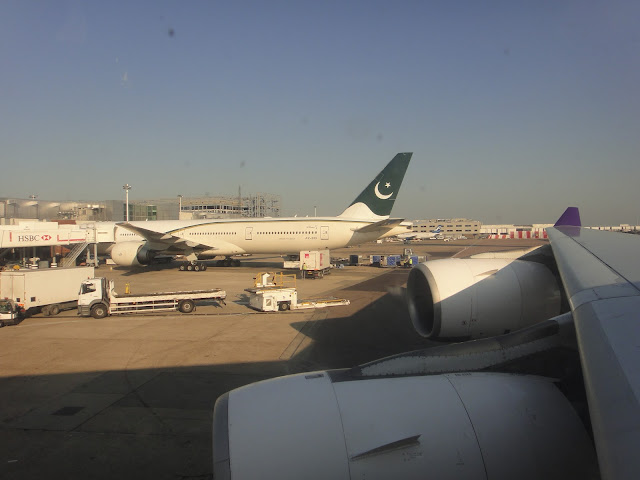 A smooth landing in blue skies on a warm London evening. The temperature was about 25 degrees celsius. Very pleasant indeed. It was great to finally have arrived in the UK after the loung journey from Australia. Another pleasant flight in Thai business class. They may not fly with the biggest and best seats but they are a reliable carrier and I am usually quite pleased with the service provided.