- December 30, 2012
I have reviewed this flight many times before but here we go again. This is the way I usually leave Australia, on this Thai Airways flight which leaves every day from Melbourne in the mid afternoon. The equipment has been a Boeing 777 of some sort for quite a few years and we have seen the -300, -200ER and the -200 versions being used. Currently Thai is flying the B777-200 refurbished configuration to Melbourne. This aircraft has had an update in economy class to include Audio Video On Demand (AVOD) in every seat. The business class seats which are angled lie flats have not changed. They are much the same as other seats on the B777 Thai fleet (with the exception of the -300ER).  The main noticeable difference in business class compared to the  -300 is the 2x2x2 configuration (compared to 2x3x2). This is a much  roomier cabin than the B777-300,  but the TV screens are slightly smaller.

So, onto my flight which I flew in early  December 2012. The aircraft operating this service is HS-TJB which is named 'Uthaithani' which is the name of a province of Thailand to the north west of Bangkok. The aircraft at the time of this flight was 16.5 years old, having been delivered new to Thai back in June of 1996. She has no doubt traveled far and wide during this time! But here today she will take me to Bangkok from Melbourne. 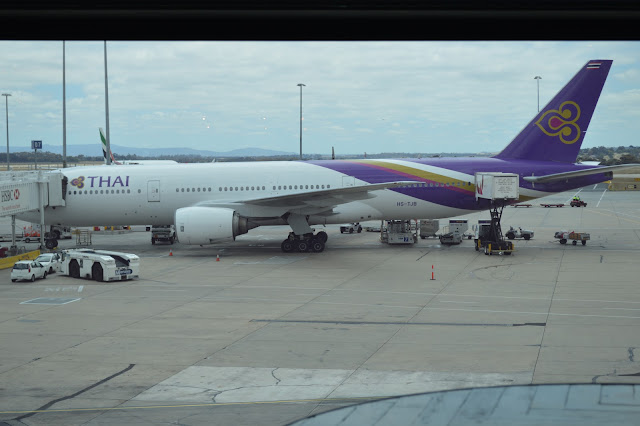 As always it was off to the Air NZ Koru lounge for a pre-flight drink and snack. Food options were pretty ordinary with a few soggy sausage rolls and not much else. It's normally better.


As you can see from the above image the passenger load on TG466 today is 298. Not bad!

Priority boarding was available in a second queue for elite status and business class passengers. Soon enough I was on board and taking my seat 15A. It didn't take long for the pre-takeoff drinks to come around, I had the Laurent Perrier champagne.


Pushback was on schedule and we made our way to Runway 16 for a departure to the south, hot on our tails is the Malaysia Airlines A330-300 who was off to Kuala Lumpur. 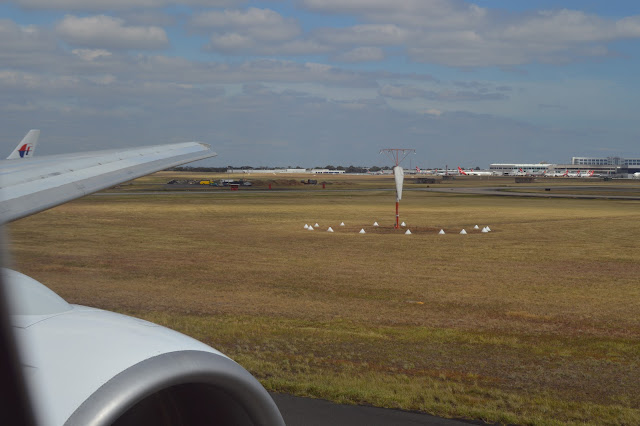 ﻿
Soon after takeoff we make some right hand turns and climb out over the western suburbs, it's a fine day and smooth flying conditions so the seat belt sign was quickly extinguished. 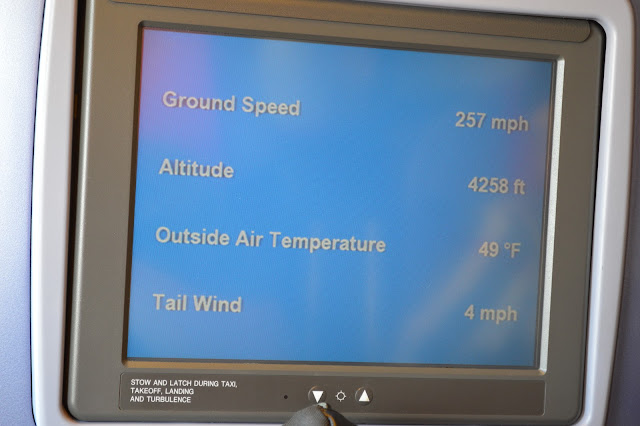 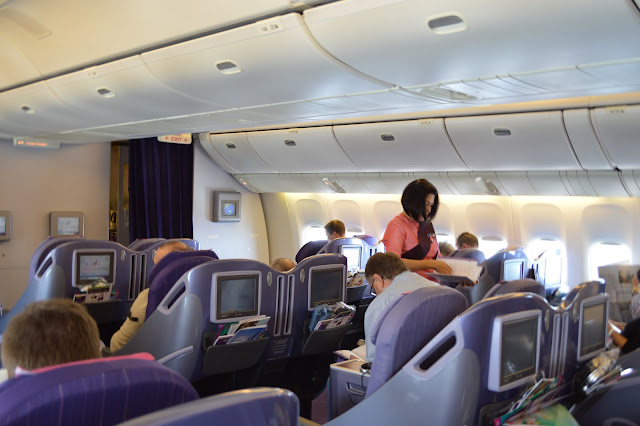 Service commenced about 30 minutes later with drinks and nuts. 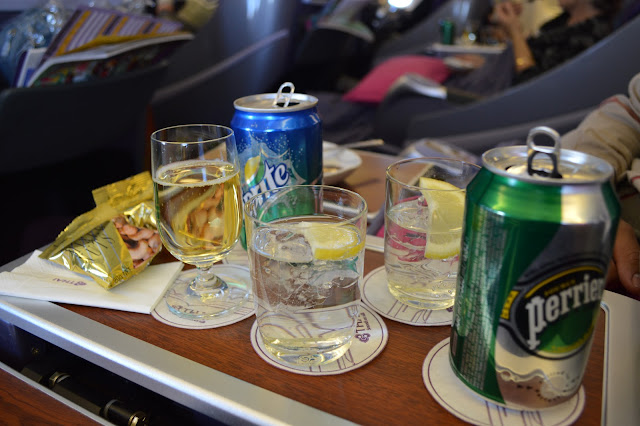 This was quickly followed by corn fritters: 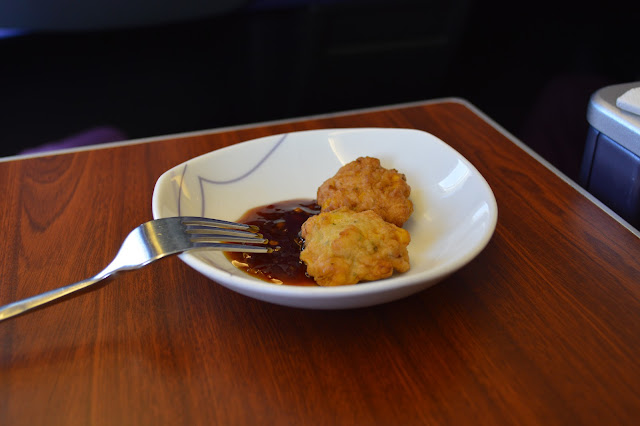 Then the trays were produced. Today we have smoked trout and sun dried tomatoes for appetiser: 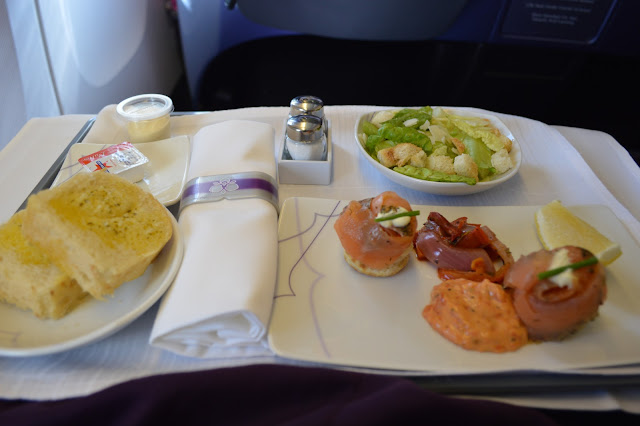 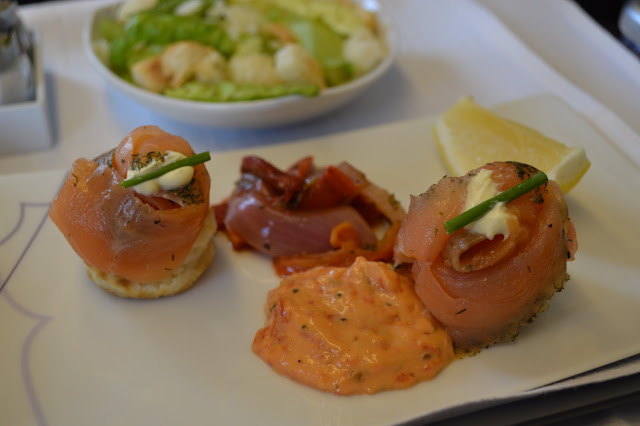 I had a chinese style chicken dish with fried rice for my main: 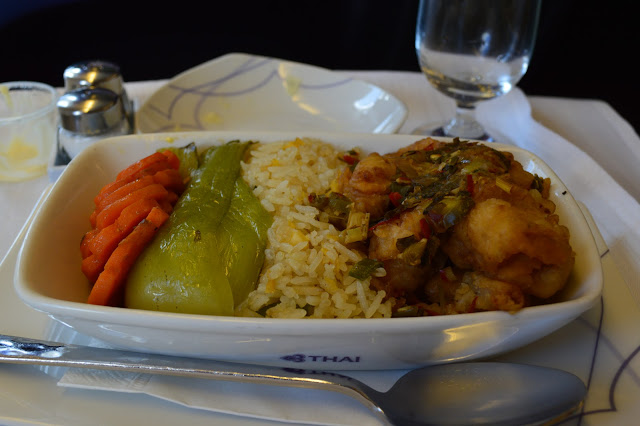 My traveling companion ordered the salmon fillet with mashed potato: 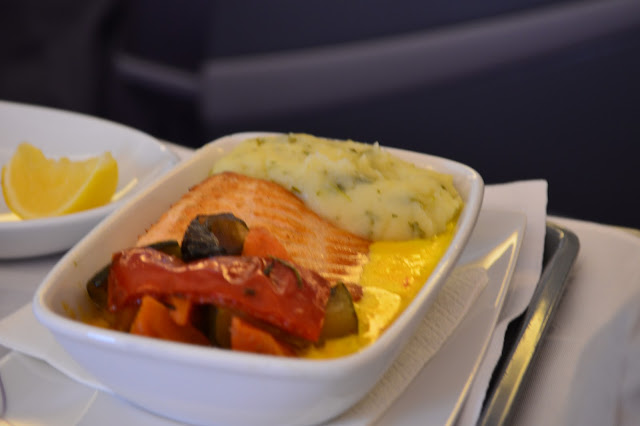 Fruit plates were offered after the trays were cleared, and then it was desserts and coffee. 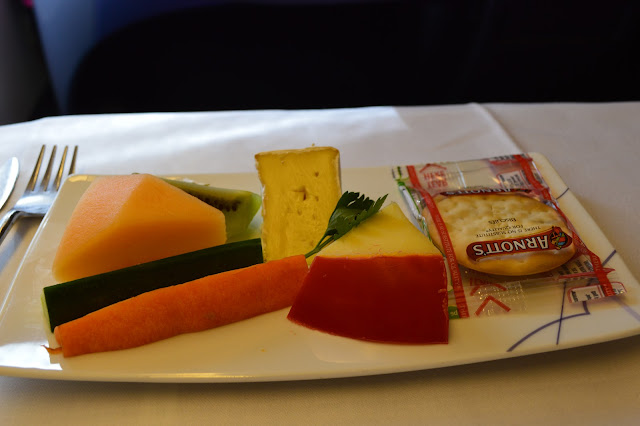 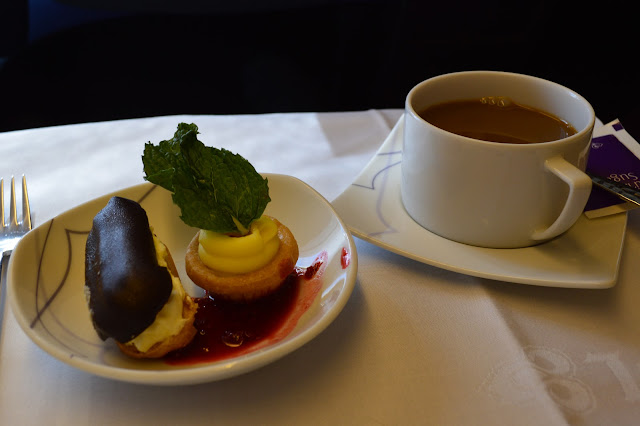 After dinner people closed their window shades and settled in to either sleeping, watching television or reading books. There was some nice clouds out the window as the sun was fading: 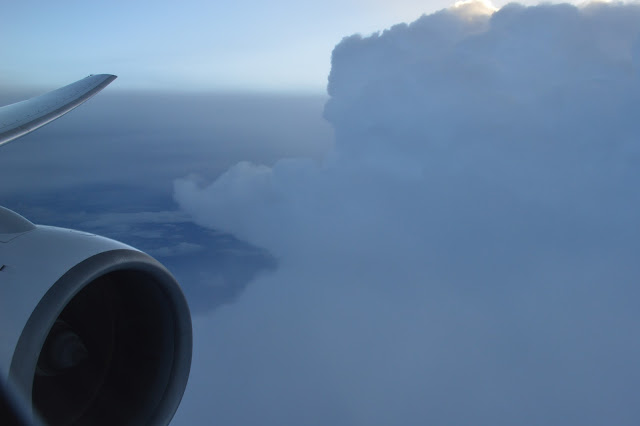 It was a pretty smooth flight with the cockpit crew doing a good job of avoiding the large CB clouds and lightning storms I saw out my window over Indonesia. I saw some pretty spectacular lightning which was fun.

At some point I dozed off and woke up before arrival for the second meal service. This consists of a single tray of noodles with some fruit and two chocolates. I was watching some shows on my tablet rather than the AVOD system on board. 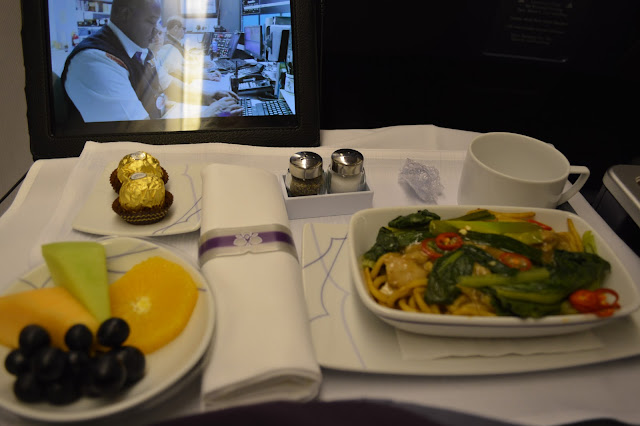 About 9 hours after leaving Melbourne we made a smooth touchdown in tropical Bangkok and made our way to a remote stand, YET AGAIN!! This seems to happen every time I arrive in Bangkok on this flight. Oh well, another 10 or 15 minutes of standing on a crowded bus I arrived in the terminal and headed off to the lounge for a shower... next flight will be Asiana to Seoul!