- January 07, 2013
After arriving at Suvarnabhumi from Melbourne on Thai Airways my next leg to Seoul was with Asiana. Soon after arrival at the Thai lounge my phone started vibrating with TripIt notifications that my flight to Seoul was delayed. Initially by 40 minutes but a short time later that was extended to 2 hours and 5 minutes. The reason for the delay was heavy snow in Seoul and all flights on Asiana and Korean has been affected. As you can see in the below pic several flights delayed and others cancelled completely. 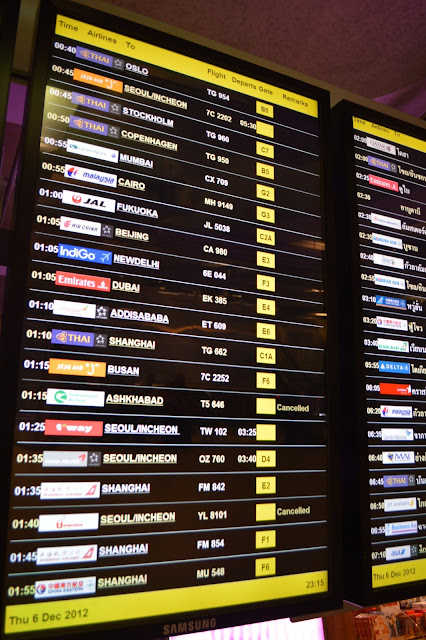 I had been using the Thai Airways lounge in concourse C for a shower but at some stage they close and the only option for Asiana passengers is the rather pathetic Louis Tavern. Rather than stay in that lounge any longer than necessary I instead decided to have an hour long foot massage in one of the airport spa's. At 600 baht (expensive by Thai standards but good for world standards) I considered it money well spent. Eventually it was time to head to gate D4 for the insane departure time of 3.40am!﻿ 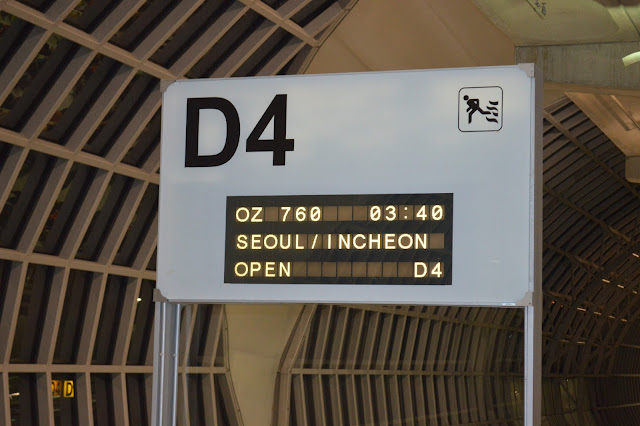 Today's aircraft was HL7741, an Airbus A330-323X and it was built in November 2005, making it a little over 7 years old at the time of flight. This aircraft has been flying exclusively for Asiana for it's lifetime. Today I was sitting in row 1 of business class on the right side.

The flight attendant in charge of business class came to each individual passenger or pair of passengers and gave a warm personal welcome and offered an apology for the delay to the service. This was very much appreciated and a really nice touch. She also reassured us that even thought it was still snowing in Seoul the pilot was more than up to the challenge of landing in snow! Let's hope so! 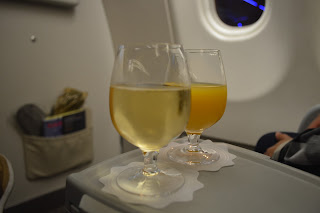 Welcome drinks were soon offered and I took a glass of the Cattier champagne whilst my companion opted for a simple orange juice. Eventually at about 4am we pushed back and headed for the runway. The pilot announced a flying time of 4 hours 35 minutes today. Not much time for sleep but I'll do my best as I am utterly exhausted by this point.

The angled lie flat seats are quite comfortable and the cabin lights were off from takeoff until breakfast service 90 minutes before arrival in Seoul. This left about 2 hours 45 minutes to get some sleep, which I did. Here is a promo pic of the seat on the A330:

With about 90 minutes until landing the breakfast service commenced. By this time it was already late morning in Seoul. Breakfast started with a fruit plate, yoghurt, breads, coffee and juice. 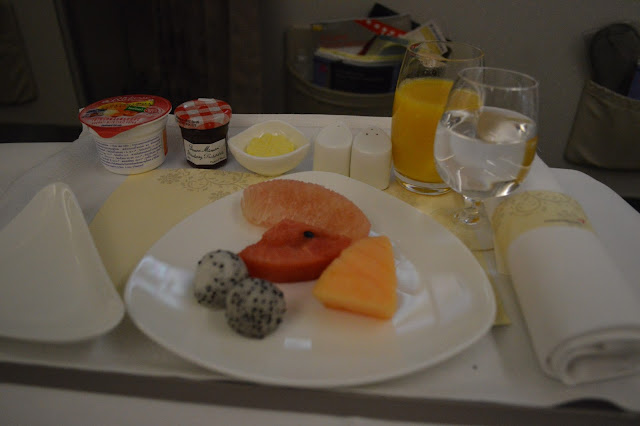 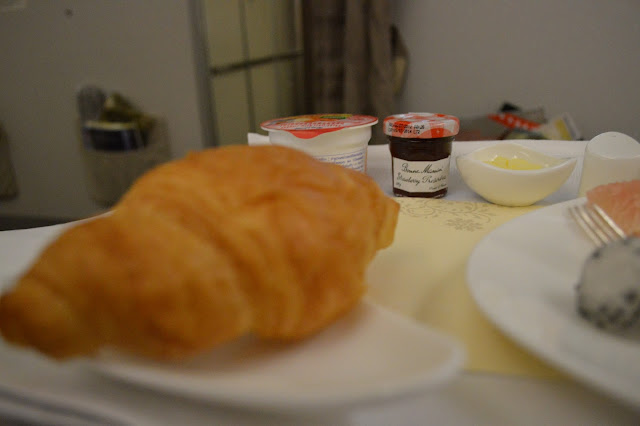 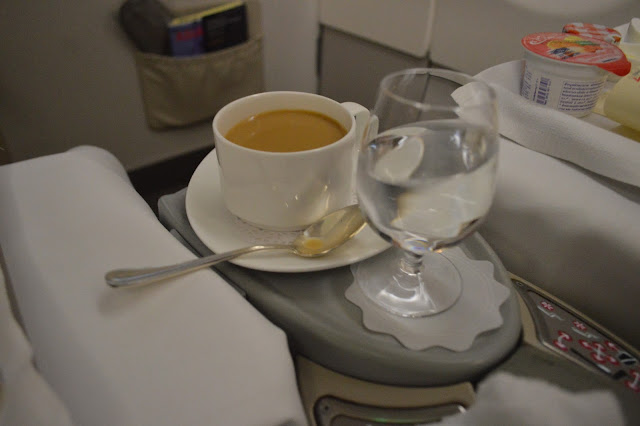 There was a few options for the main, I chose the eggs with potato and sausage whilst my companion had a seafood congee.


The serving dishes used were very similar to Thai Airways ceramic casserole dishes. Personally I think airlines should opt for the round plates seen on Singapore or Emirates business. Just looks a bit economy like in these rectangle dishes. The food was about what I expect for catering ex-Bangkok (i.e. never that good).

With a sea of cloud below we commenced descent into Seoul. 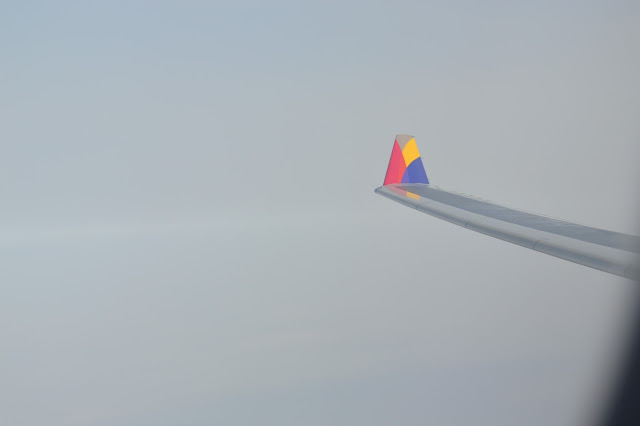 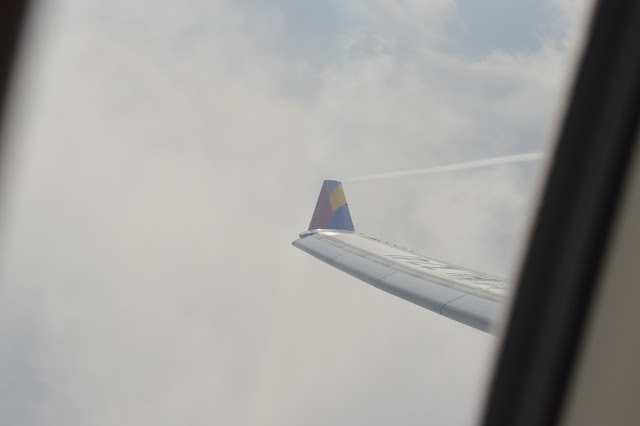 When we popped out of the cloud at the last moment there was snow as far as the eye could see. In fact it was lightly snowing as we landed. I was pretty excited having never landed in snow before. The airport was covered with it and we had a very slow taxi over ice and snow to get to the gate. 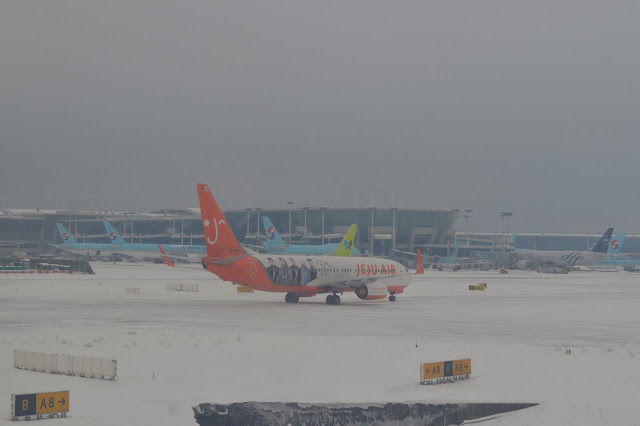 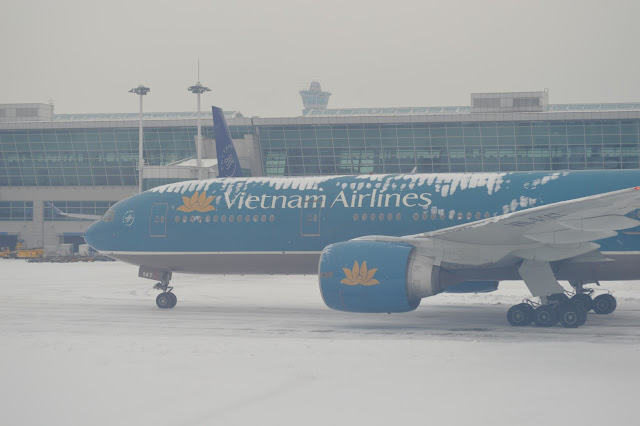 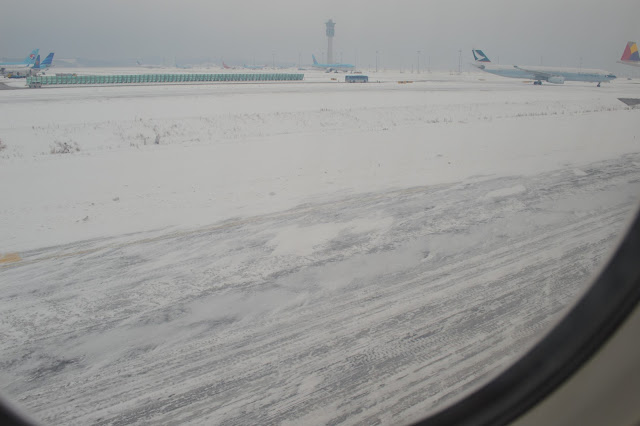 Overall despite the delays it was a good flight, too short to be properly rested but I think I managed 2 hours. The service was polite and efficient, exactly as I expect from a Korean carrier. Nice job Asiana!
Airbus A330 Asiana business class trip report