- March 14, 2013
As part of my recent round the world trip I had a couple of sectors on Malaysia Airlines. Here is a report on my first. It was actually my first ever flight on the airline and my departure point was Yangon (or Rangoon if you like).

If you have ever been to Yangon you will know that the taxi's tend to be rather old (there are some exceptions). I was in one of these old things when of course it broke down on the way to the airport. The driver was quite insistent I should wait for his friend to come and take me the rest of the way but not knowing how long that might be I flagged down another taxi and recommenced my journey. Fortunately there are quite a few taxi's plying the streets of Yangon so finding one isn't really a problem.

I arrived at the airport and found the check-in area to be large and modern in appearance. I headed straight up to the Malaysia Airlines business class queue and was served immediately and given boarding passes to Kuala Lumpur and also for my onward flight to Singapore.

I was also given an invitation to the Royal Jade lounge which is found in the departures area after passport control and security.


It's all very civilised and comfortable. Not what some may expect for a country like Myanmar I suppose. The food offerings were pretty basic with a few pastries, sandwiches and other assorted packaged snacks and drinks. There was however a man behind a bar making coffee on request and I ordered a latte which wasn't too bad! The internet was also available via WI-FI and worked quite well.

After a while I decided to head to the gate and it took me a while to find my aircraft as I was looking for the usual Malaysia Airlines tail but I saw this:

It was 9M-MXA, the Malaysia Retro colour scheme which has been made to celebrate the 40th anniversary of the carrier. So it was to be a couple of firsts for me, first time on MH and first time on a retro jet! If you are interested in the painting of this aircraft here is a YouTube video from the airline:


Boarding had already commenced by the time I finished taking my photos and as I entered I immediately noticed the beautiful Boeing Sky Interior fit-out on this aircraft. The business seats were all leather in a bluey purple type colour. I was impressed and think it's the nicest 737 I have flown on so far. Also the seat pitch of 42 inches was very decent and far superior to what Qantas offers (37 inches) on it's B737 fleet. Qantas, take note!

Each seat also has a leg rest, foot bar, personal on demand entertainment system and inflight power supply. Pillows and blankets were placed on each seat.

Soon after being seated preflight juices were offered and I had the airlines signature guava juice.

We were soon on our way and as we took off I had a great view of the city and the Yangon River. There was no clouds around but still plenty of haze.

As we climbed into the sky for the 2.5 hour flight down to Kuala Lumpur I had a play around with the AVOD system and the seat. The seat controls are pretty basic, just a recline and a lever for the footrest.


What has let the product down very much unfortunately, is the headsets provided. They are equivalent to an economy class headset on many airlines. I think noise cancelling headphones have become pretty standard these days and they should be provided even on regional services.

Pre meal drinks and nuts were soon distributed by the lovely crew. I had a glass of champagne and was handed a packet of mixed nuts. I know this is pretty normal in business but I think putting the nuts in a proper  bowl would be a nice touch.

Lunch was soon offered and I opted for the chicken curry which came with a seafood salad and a creme brulee type dessert. It's basic but ample for a flight of this length I suppose. 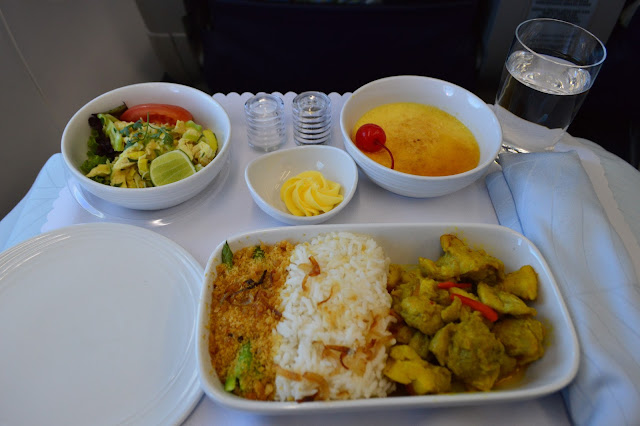 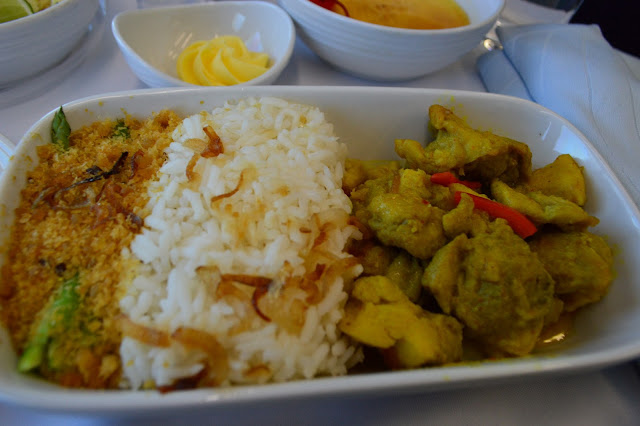 The service was great and my champagne was regularly topped up. I felt the seat was very comfortable and perfect for a 2-3 hour journey. The AVOD system was fairly extensive in it's offerings and I was more than entertained.

Soon enough it was time to descend and my glass was cleared away and we landed in Kuala Lumpur right on schedule.

Overall an enjoyable flight and I left feeling quite impressed with the airline. The seating is really good for a Boeing 737 and the flight attendants were charming and always had a smile on their face. Now that the airline is a part of the oneworld alliance I look forward to flying with them more often!