- April 29, 2013
The small regional jets that are so popular in North America never really  became popular in Australia, so when I had the need to fly from Montreal to New York I jumped at the chance of sampling the Embraer ERJ-140 of American Airlines. I have flown on the Canadair CRJ's but never the little Embraer's and the ERJ140 model is quite rare and in fact AA are the only airline using them. They seat 44 passengers in a 1x2 seating arrangement.

So it came time for me to fly on the Embraer and I had pre selected the exit row on the left side,  a single seat on its own. I arrived at Montreal airport where it was snowing on and off and very very cold! Being Australian, flying in snowy environments is quite a rarity for me so it was pretty exciting. A new type, a new route to fly, plus I was heading to New York and I love New York.... who doesn't?

I have elite status in oneworld so my baggage was priority tagged and I had priority AAccess for security although the airport was quiet so fast-track was not required. As usual US immigration formalities were completed here and I headed to a food outlet for breakfast. There are no lounge facilities unfortunately.


Eventually boarding was called and priority boarding was available for oneworld status holders. I was among the first few on board and headed to seat 11A and got comfortable.


We were soon on our way but before takeoff we had to be de-iced:

After that was completed we made our way to the runway but as we were doing that the wind and snow really started to pick up. In fact it was so bad that I could barely see a thing out the window and the snow seemed to be going sideways outside. I wondered whether it was too bad to takeoff, and I actually became quite nervous all of a sudden. I have flown so many times and I love it but this was by far the worst weather conditions I had experienced inside an aircraft. The couple sitting opposite me looked nervous also, but the pilot continued on to the runway and applied takeoff thrust so away we went. I  trusted they knew what they were doing but I was holding on to my seat with white knuckles.

We lifted off and immediately experienced some pretty rough flying conditions, we were in snow and cloud and were bouncing around quite a lot. Fortunately this only lasted maybe 5 or 8 minutes before we climbed out of the soup and into blue skies.... thank goodness! 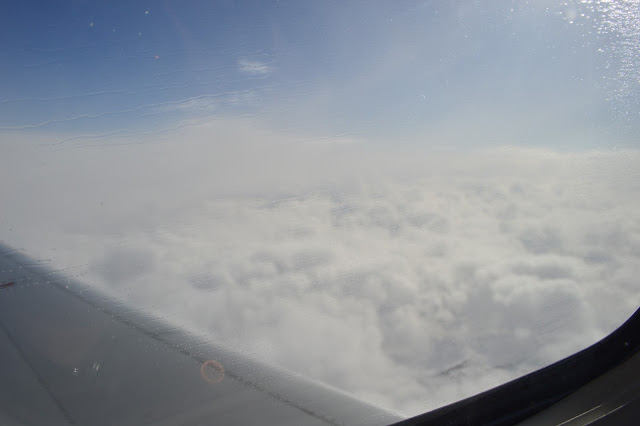 Cabin service commenced and on this 60 minute flight only a small glass of soft drink was on offer. Not even a packet of pretzels to go with it. A little disappointing but I can manage!

Soon enough with the weather below looking quite clear we commenced descent into New York. I was treated to a magnificent view of Manhattan:

We flew right around the city and out to sea for a while before coming back and making our approach to JFK airport.

A smooth touchdown and we were soon at the American terminal and disembarking. Overall an interesting experience with the weather and it was great to try the ERJ. I found it perfectly comfortable and a refreshing change from the usual B737s and A320's I find myself on.