After my arrival from the USA into Tokyo Narita I checked in at the airport Hilton for an overnight stay. My onward flight would be departing from Haneda, quite a distance away so it meant a very early start the next morning. I specifically chose Haneda as Cathay offers First Class on that route but they don't from Narita.

Firstly, the hotel. Hilton Narita is a short free shuttle bus ride from the airport and they have excellent rates. I payed the equivalent of approximately $100 AUD for the night. It would be even cheaper at today's exchange rates. The hotel is quite isolated but does have free shuttles to the nearby town. I was just here to relax so stayed in my room and ordered room service which was pretty ordinary.

I had views towards the airport but the window had fogged up so I couldn't see much. It was winter in Japan and quite chilly outside. The windows seemed to be double glazed and there was virtually no noise from passing aircraft.

After a decent night's sleep I was up to get the first shuttle of the morning back to Narita. From there I would connect to the airport limousine bus service to Haneda at 7am. It all went like clockwork and I was at Haneda by 8.30am, a little over two hours before my scheduled departure to Hong Kong. Perfect!


Haneda's international terminal was only opened in 2010 and since then many airlines have been operating to both Tokyo airports. Cathay is one such airline with 2 flights a day on Haneda to Hong Kong, and several to Narita. The flights from Haneda are scheduled to be Boeing 747-400s.


I headed to the First Class counter and was greeted with a smile. The agent informed me there was only 1 other passenger in the 9 seat First Class cabin. I was pretty happy with that, service was going to be incredible! After check-in I headed off to the JAL First Class lounge and found a window seat.


Food offerings were pretty poor. There was a couple of hot items and several snacks and coffee machines. There was no cook to order menu that I noticed. Overall I found the catering below standard for a First Class lounge. I wasn't too worried though as I knew a large meal was waiting for me once on board.

Soon enough the aircraft operating my service was towed from its remote stand parking position to a gate near the lounge. I had a good view of her as she arrived.

Today's flight was being operated by B-HOV, a 22 year old jumbo. Interestingly, since I flew on this flight this aircraft has been placed into storage by Cathay and is not currently flying. That's pretty sad as she seemed to have lots of life left in her yet!

The lounge was pretty boring so I went for a wander. Soon enough it was time to board and I was first in line. The earlier you board the more champagne you can drink is my policy! I was warmly greeted once on board by a Japanese female crew member. She escorted me to me to seat 1K in the nose of the 747.  I was immediately impressed with the seat. It's a sort of open suite and looks very classy!


As soon as I was seated I was asked for my choice of welcome drink, and for those of you who read my blog on a regular basis, champagne was ALWAYS going to be my choice. In regional First Class the current champagne on offer is Amour De Deutz Blanc de Blancs 2003. It's certainly not one I have ever seen at my local bottle shop, so it was good to try something a bit different. I was impressed! I also received a hot towel at the same time. I thought the champagne glass used was nice too. 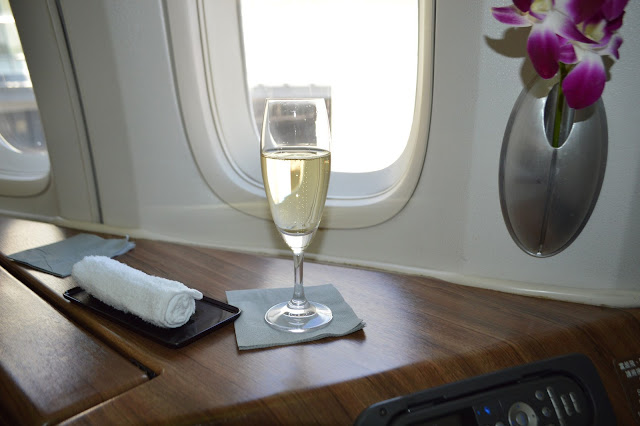 This being my first time in the Cathay First Class suite I took some time to check out the controls and features of the seat.


It was time to pushback, but not before I had managed a couple more glasses of champers. It turned out there was a 3rd passenger in First, so 3 out of 9 in total.

We made a takeoff towards the south (I think) and soon set course for Hong Kong. Whilst the seatbelt sign was still on I had time to peruse the menu and decide on my lunch.


As I am not a fan of raw fish, miso soup and various other Japanese specialities, I decided to stick with the western options. Around this time the captain came on the P.A system to announce the sight of Mt Fuji. Everybody came over to the right to take a peak, and there she was, just visible between the clouds. It was an amazing sight!


Time to decide on some inflight entertainment. I love how the handset has an LCD screen with information on flight time remaining, to help you decide which shows to watch. I decided on one of my all time favourite shows, Curb Your Enthusiasm... even though I have seen every episode many times! 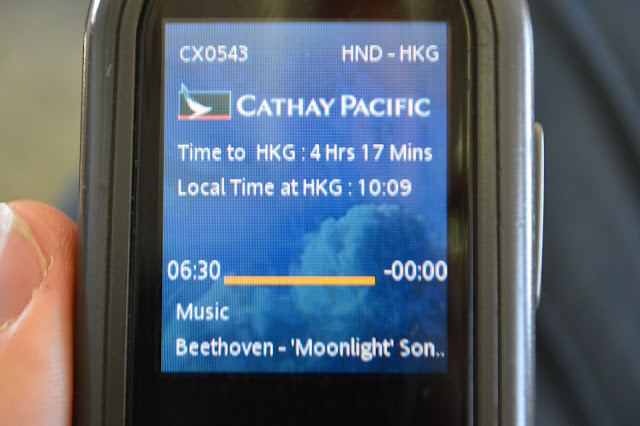 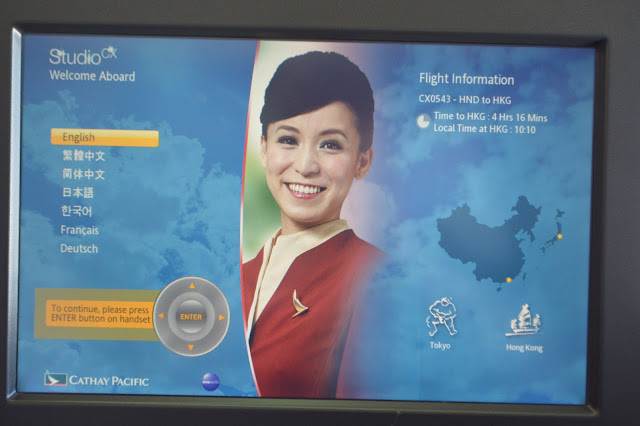 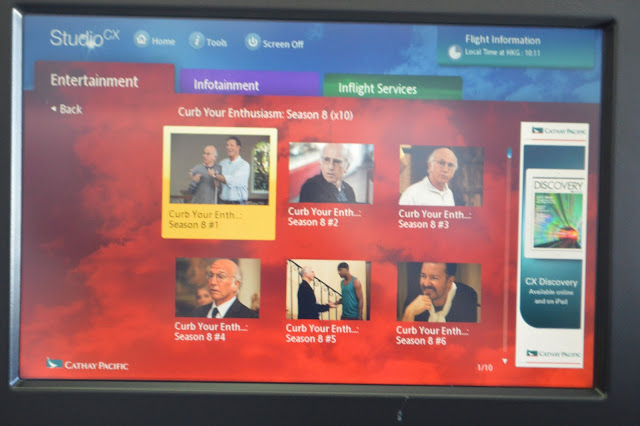 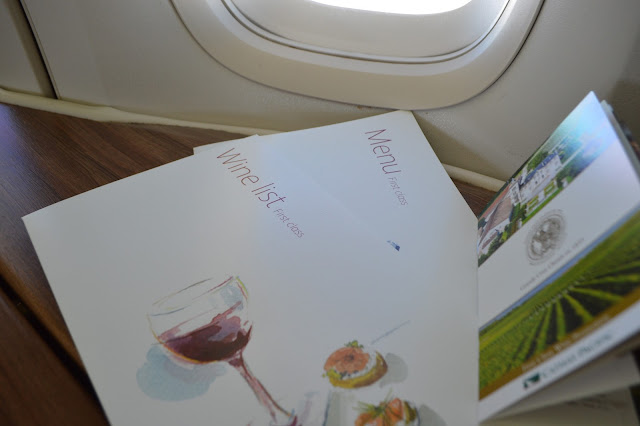 Once I was settled in the extremely polite cabin crew came around to take drinks orders and I continued with the champagne. Some warm nuts and snack mix were provided as well. 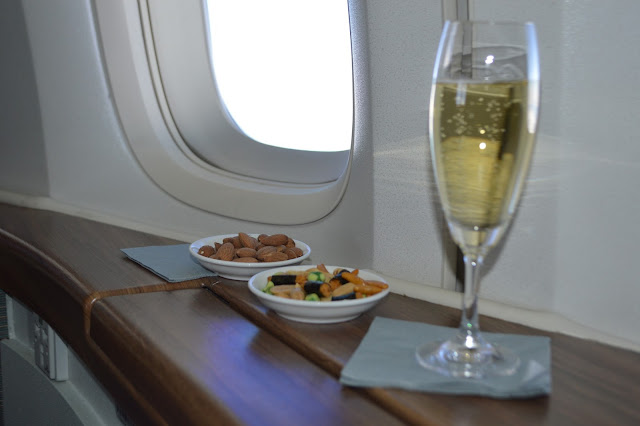 In First Class you can dine whenever you wish and the crew did come and ask if i was ready to eat or whether I wanted to leave it for later. I was quite hungry so I told the crew to get things started. The tray table is very large and the table cloth was laid and bread basket was delivered. There was a hand written note on the table from my two flight attendants thanking me for travelling with them and wishing me a pleasant flight.... this little personal touch really impressed me and I'm still talking about it to friends months later. What amazing service! Here is how the meal service went:


The entire meal service was fantastic. The presentation and taste of all courses was impeccable. I was loving every minute of it.  I really liked the cute little tray the coffee came on at the end with the sugar cubes... very classy indeed.

The flight was a little under 5 hours so by the time the meal was complete we had around 2.5 hours remaining. During that time I kept drinking champagne and nothing was too much trouble for my lovely Japanese crew. I also received a visit from the inflight manager, a lovely Philipino woman who asked whether I might participate in a survey and in return I was offered USD5 off a duty free purchase. Since I was buying a Hong Kong Express pass onboard I decided to take the survey. Needless to say they scored very highly!

Eventually this heavenly flight had to come to an end and the captain announced our arrival information for Hong Kong. We soon were on descent and touching down to a pleasant afternoon in Hong Kong.

There was no special arrival service for First Class passengers, I just made my own way to immigration. This is something that Cathay should consider adding as it is something that Thai Airways does so brilliantly in Bangkok with personal buggy service to either the lounge or immigration.

Other than the lack of special arrival service in Hong Kong, this flight was one of the absolute best I have been on. I really hope to travel long haul on Cathay First Class in the near future.

I also have a You Tube video of this flight and you can see it here: