- November 02, 2013
It was a long time coming but finally I have flown on the Bombardier Q400 (also known as Dash 8-400).  This report covers my first flight on this high speed turboprop airliner and it is on a very interesting route, Brisbane to Longreach. Why is it interesting? Well Longreach is the original home of Q.A.N.T.A.S. The Queensland and Northern Territory Aerial service, which eventually become what we now know today as Qantas. So this Qantaslink flight on a very modern aircraft actually takes us to back in time to 1921 when the airline first commenced operations. The purpose of the trip was to visit the Qantas Founders Museum which I will cover in another post.

I had completed check-in online but due to having been pre allocated exit row seats I had to stop by the Qantas lounge to collect my boarding pass. As usual with Qantas platinum status access was granted to the business class lounge. It was hard to find a seat which is a regular problem at Brisbane unfortunately. Eventually once settled I had a breakfast of egg florentine tart and potato roesti. Barista coffee was also on offer. Boarding for Longreach (via Barcaldine) was called at about 8.10am and I headed downstairs to the Qantaslink ground floor gate area. Our aircraft was at a remote stand so a short bus ride was required.

My cabin baggage was identified by a passing staff member as being too big so I was told to have it tagged at the service desk and leave it out beside the aircraft to be loaded by the ground crew into the hold. Soon afterwards I was on the bus and headed to our ride for the day... the bus driver initially drove to the wrong aircraft but we soon got re-directed to VH-QOW, a 3.5 year old Q400 operated by Sunstate Airlines for Qantaslink. This aircraft is painted in a Taronga Western Plains Zoo colour scheme.


Once onboard I was welcomed by a female cabin crew member who was checking the boarding passes at the entrance. My travelling companion and I were allocated 2C and 2D which are emergency exit bulkhead seats on the right hand side. These are probably the best seats on board with good legroom and also the privacy of the bulkhead means you don't need to stare at the FA in the jumpseat like those passengers in 1A and 1B.


We were welcomed on board and the pre recorded safety demo audio was played with the 2 flight attendants doing the demo in the aisle. The engines roared into life and we headed off down to runway 01 for departure. After takeoff we made a right turn and flew around the Port of Brisbane completing a 270 degree turn to fly back overhead the airport:﻿

Today's flight to Longreach has a short stop in Barcaldine en route. The flight time to Barcaldine is  about 1 hour 45 minutes. On some days of the week the flight stops in Blackall instead, and there is also 2 direct flights per week. For the flights stopping in Barcaldine and Blackall, some passengers get off, and others get on. The ones boarding will travel to Brisbane via Longreach. All services in the other direction from Longreach to Brisbane operate direct. In total as of November 2013 there are 8 services per week to Longreach from Brisbane. The only other airline operating to the town is REX with a 3 weekly service to Townsville on the SAAB 340.

Once the seatbelt sign was turned off the captain made an announcement predicting smooth weather and an ontime arrival in Barcaldine. The cruise altitude was 20,000 feet. At this point the crew commenced the inflight service. Being a morning flight there was a snack box along with tea, coffee and soft drinks.﻿

The snack pack contained a fruit bun with butter, packet of sliced apple and a muesli bar. It was fine and about all I expect on a regional flight, despite the flight time of almost 2 hours. Once the snack packs were distributed the drinks trolley was wheeled out and tea, coffee, juices and a selection of soft drinks were available. On afternoon services there is also complimentary beer and wine.

There is a lavatory at the front of the cabin (I actually can't remember if there was also one at the rear). It is extremely tiny as you would expect on a turboprop! 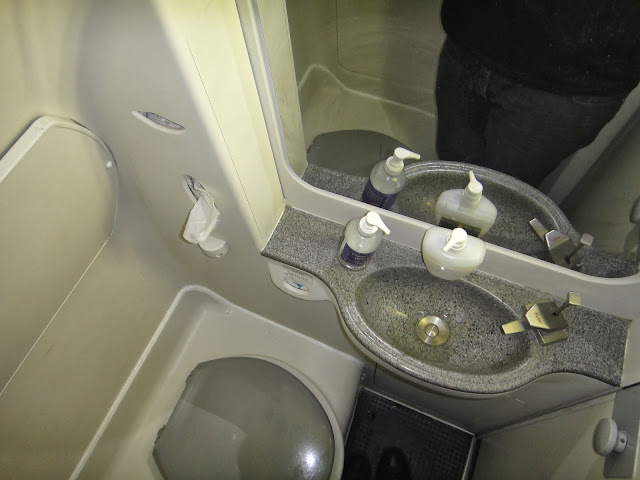 There is one downside to siting in the window seat 2D. The window is placed a lot further forward than the seat so you will need to lean forward a little to see out. There was some lovely views along the way: 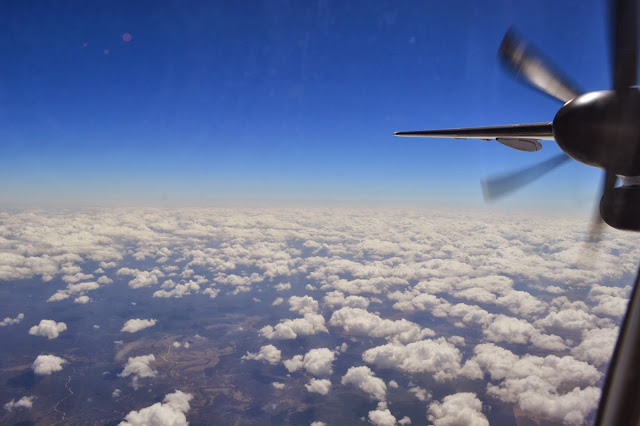 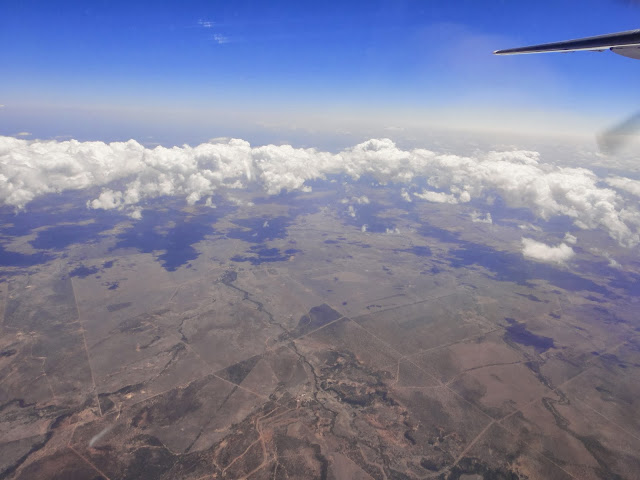 Don't expect any inflight entertainment on Qantaslink services, other than the inflight magazines. I suggest bringing an iPad or tablet device with your own preloaded entertainment for a flight like this. Or at least bring a book if you still use those!

After about 90 minutes flying the descent commenced into the small town of Barcaldine. A town of just 1300 people they get a Qantaslink flight 3 times a week from Brisbane. The ground temperature was around 35 degrees and there was quite a lot of turbulence during the descent and approach which is expected with the hot weather over this terrain.

We landed and made our way to the small terminal building made of tin. There was a group of people awaiting us. The time on the ground here was just 20 minutes or so. About 15 people got off and another 10 or so got on. The ones that got on were all bound for Brisbane via Longreach. The Qantaslink ground agent stepped on board and handed the crew the paperwork and a moment later the doors were closed and the engines started once again. We all got to hear the safety demo yet again and the flight attendant announced their would be no inflight service for the 20 minute hop to Longreach.

With the hot weather and the relatively low altitude of this short flight there was quite a bit of turbulence en route. The seatbelt sign remained on throughout. A moment after reaching the top of climb we were on descent again into Longreach. The land out here is very brown and very flat!

We made a smooth landing and headed towards the terminal which is a new addition to the airport. The new modern structure has been open for slightly more than a year replacing the older and much smaller building. Out my window was the most amazing sight of a Qantas jumbo jet and Boeing 707. Out here in the middle of the outback! These aircraft are on static display at the Qantas Founders Museum. 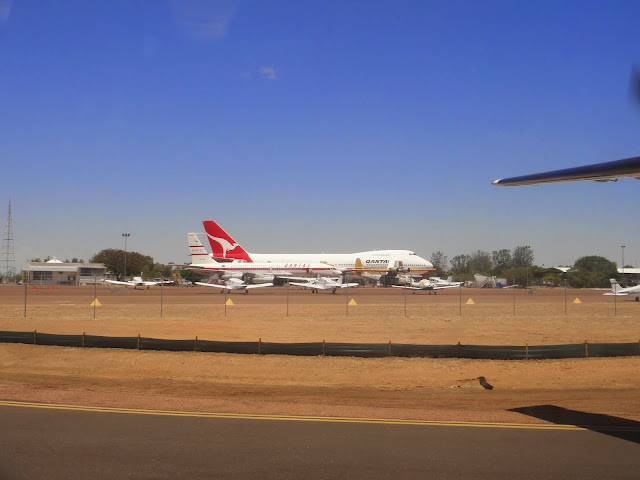 It was a short taxi to the terminal and we disembarked into the 35 degree heat! 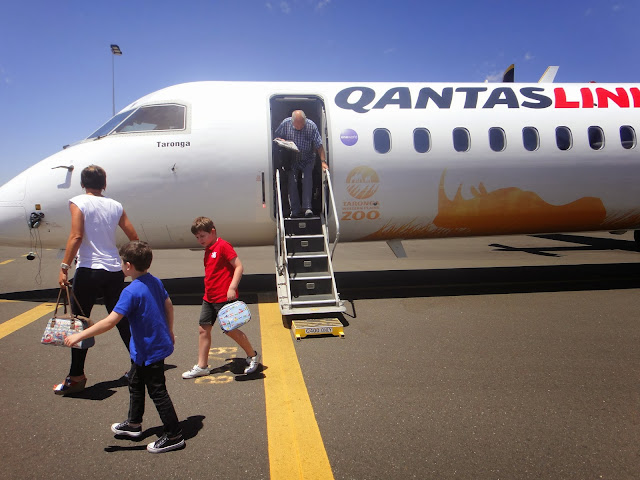 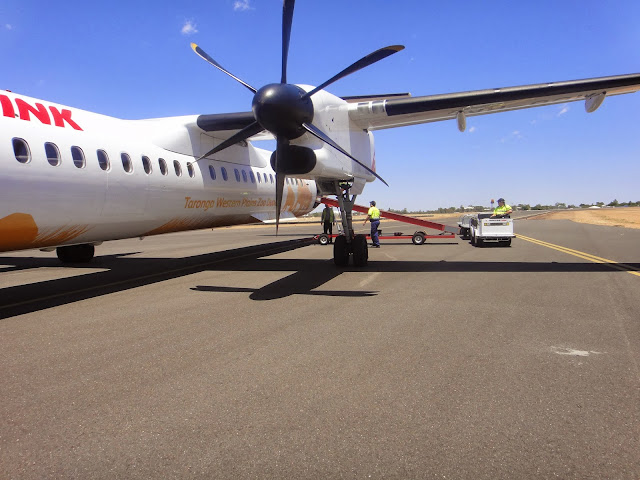 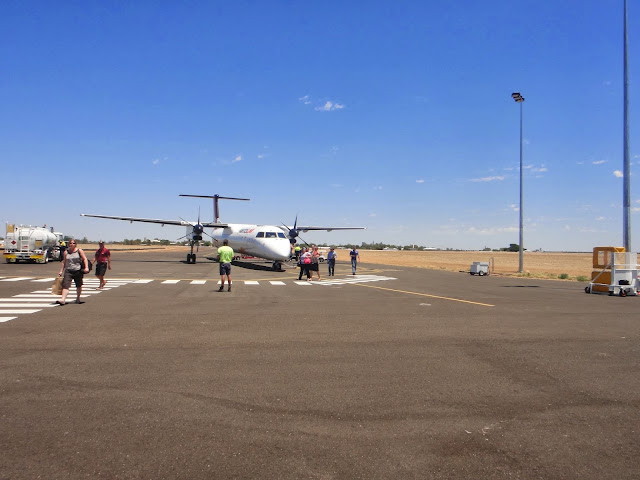 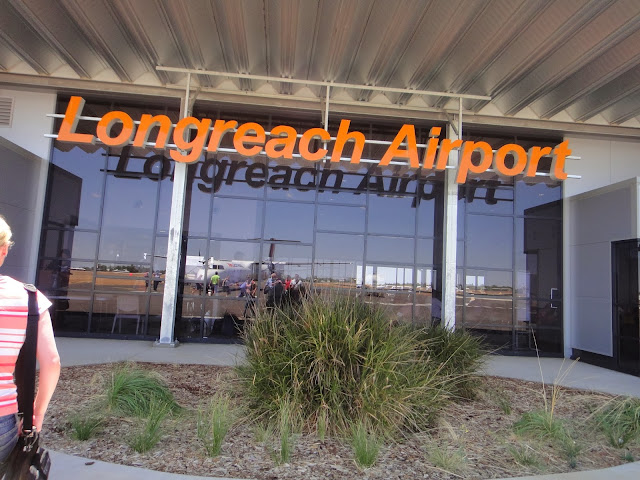 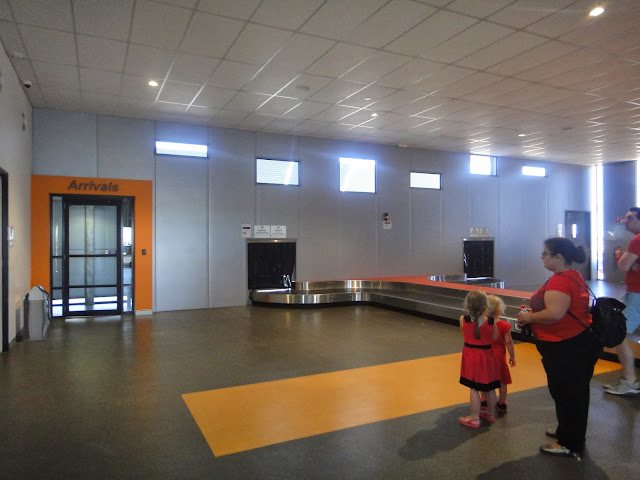 The terminal is small but modern and even features a proper baggage carousel. Bags were available just a few minutes later. Then it was on to our motel before a visit to the Qantas museum.

I had a very pleasant experience on Qantaslink, the onboard service was polite and efficient and I found the seats perfectly comfortable. The flights operated close to schedule as well. Next up I will post about the Qantas Founders Museum and the flight back to Brisbane.
dash 8 economy class Q400 Qantas Qantaslink trip report