- April 08, 2014
In January I had the chance to fly on Emirates on one of my sectors en route from the UK back to Australia. The flight I took was from Dubai to Bangkok, operated by the Airbus A380. The flight number is EK384 and the departure time was scheduled for the ungodly hour of 3.05am! Arrival into Bangkok is at a more respectable 12.25pm.

At just after midnight I woke up in my Deira hotel, took a shower and grabbed a cab for the short trip to the airport. This flight leaves from the newest terminal, T3. It took me a while to work out where to find the First Class check-in counters, I was able to use them as part of my Qantas Platinum status since the two airlines are now partners. In fact I was booked on the Qantas codeshare  flight number QF8384.

Once I  was through the passport control and security formalities it was straight to the First Class lounge, courtesy of the Qantas Platinum card. If you don't have this status you would be using the business class lounge facility. I know many people don't approve of the Qantas-Emirates partnership, but I think it is magnificent when travelling to and from Europe.

There is a rather large a la carte restaurant in the lounge, have a look at the meal I consumed BEFORE I even got on the plane:

Sorry I can't remember the names of all the dishes, but it was beautifully presented and I even got to see the chefs at work as the kitchen has glass windows allowing you to look inside. Being close to 2am though it was fairly quiet in the airport so they were not particularly busy.

One of the interesting and somewhat unique features of the Emirates lounges in T3 is that you can board the aircraft directly from the lounge. Each gate is represented in both the business and first class lounges with a gate agent arriving just before boarding commences to scan boarding passes. You then proceed down an elevator and straight onto the jetway. I love it!


Today I was allocated a centre aisle seat, 8G. The staggered layout is in a 1-2-1 arrangement with plenty of privacy and loads of space.

On the seat was a menu, noise cancelling headphones, blanket and pillow. There is also a fully stocked mini bar (not refrigerated) in every seat. 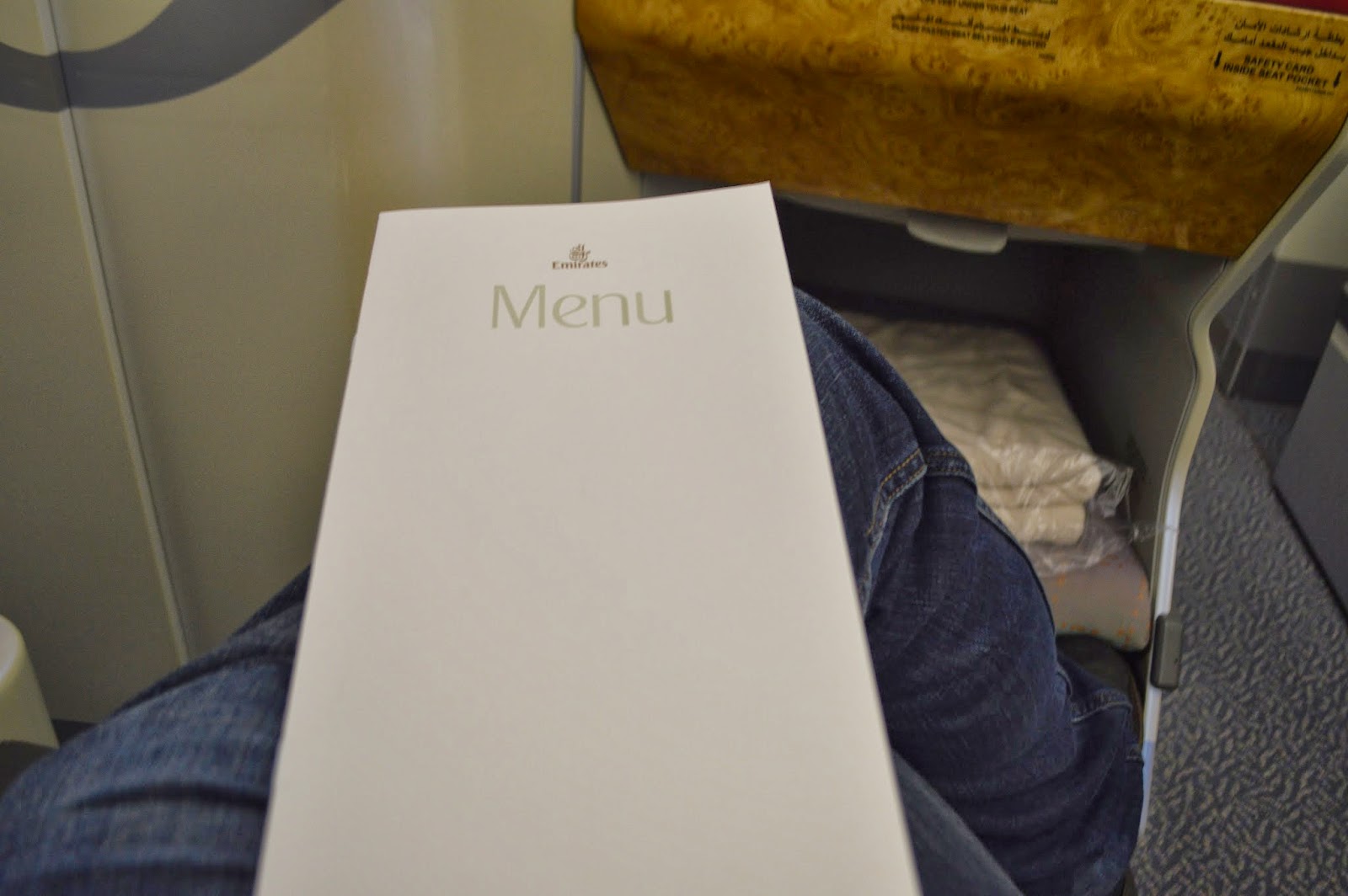 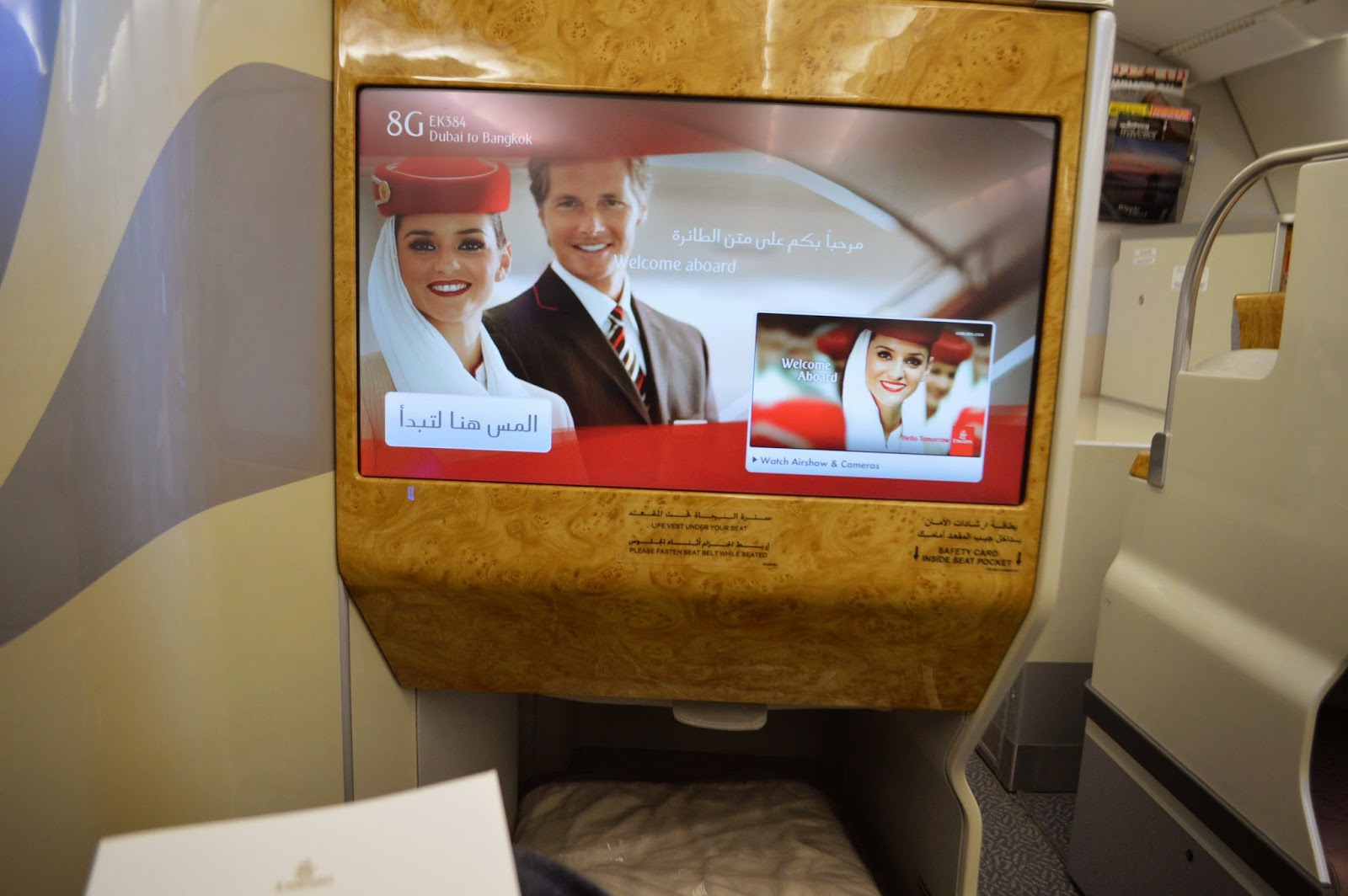 This particular flight being only 5 hours 30 mins offers just one meal. As the departure is at such a strange time the meal service is at the end of the flight and not at the beginning. Most people, including myself, tried to sleep fairly soon after takeoff until breakfast before landing. Here is the menu: 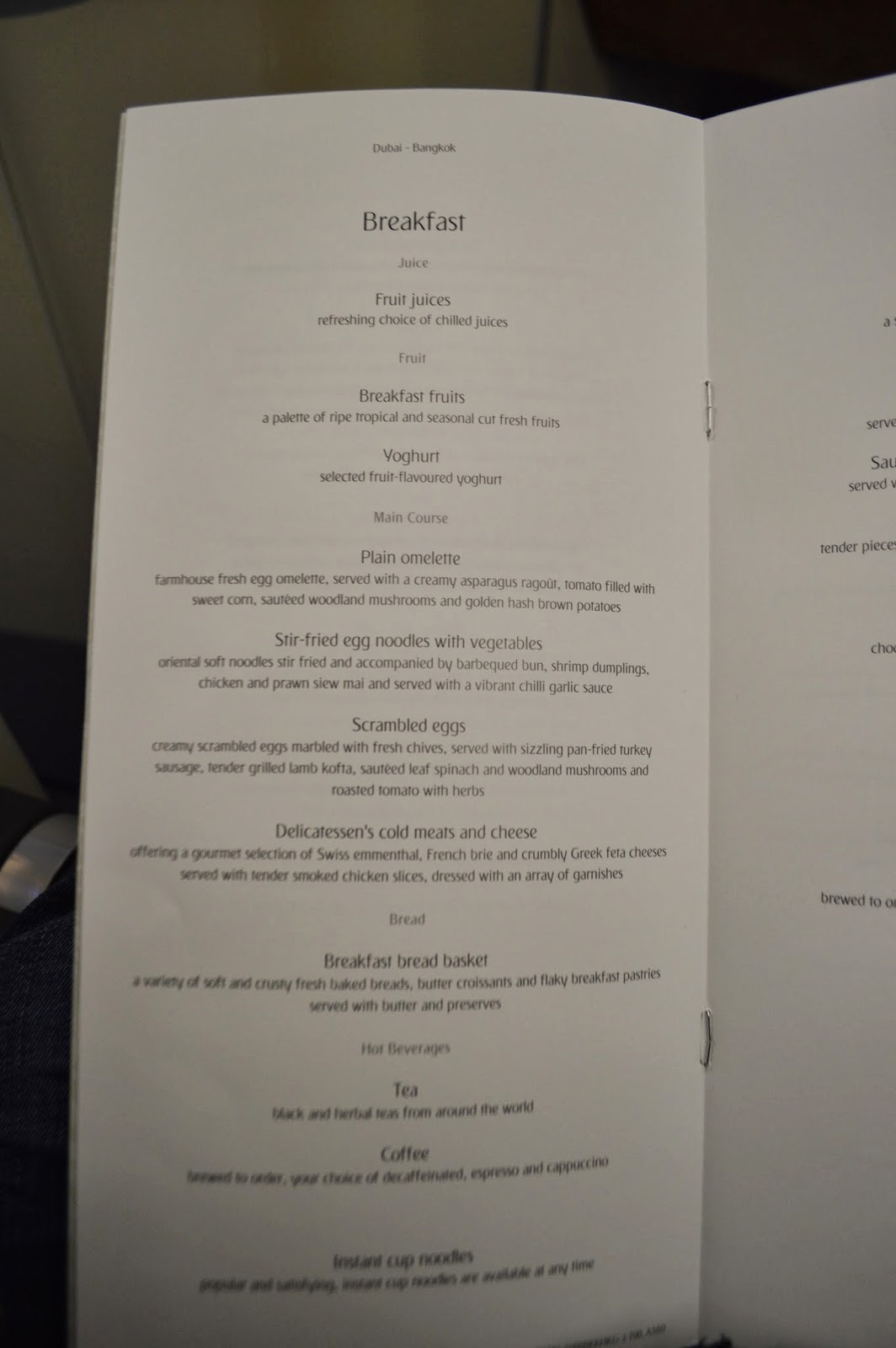 Champagne was served as a pre departure drink in a nice large champagne flute: 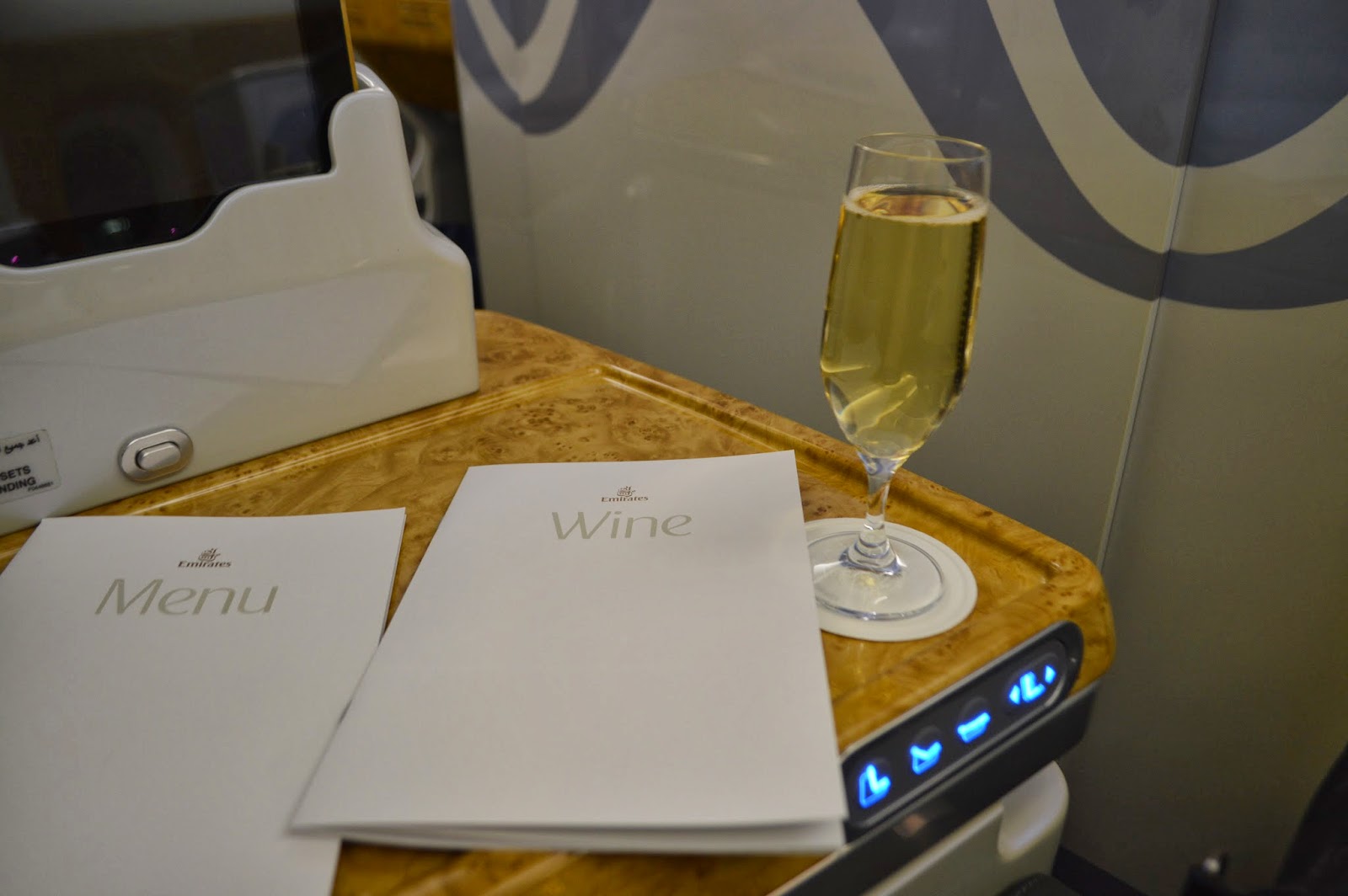 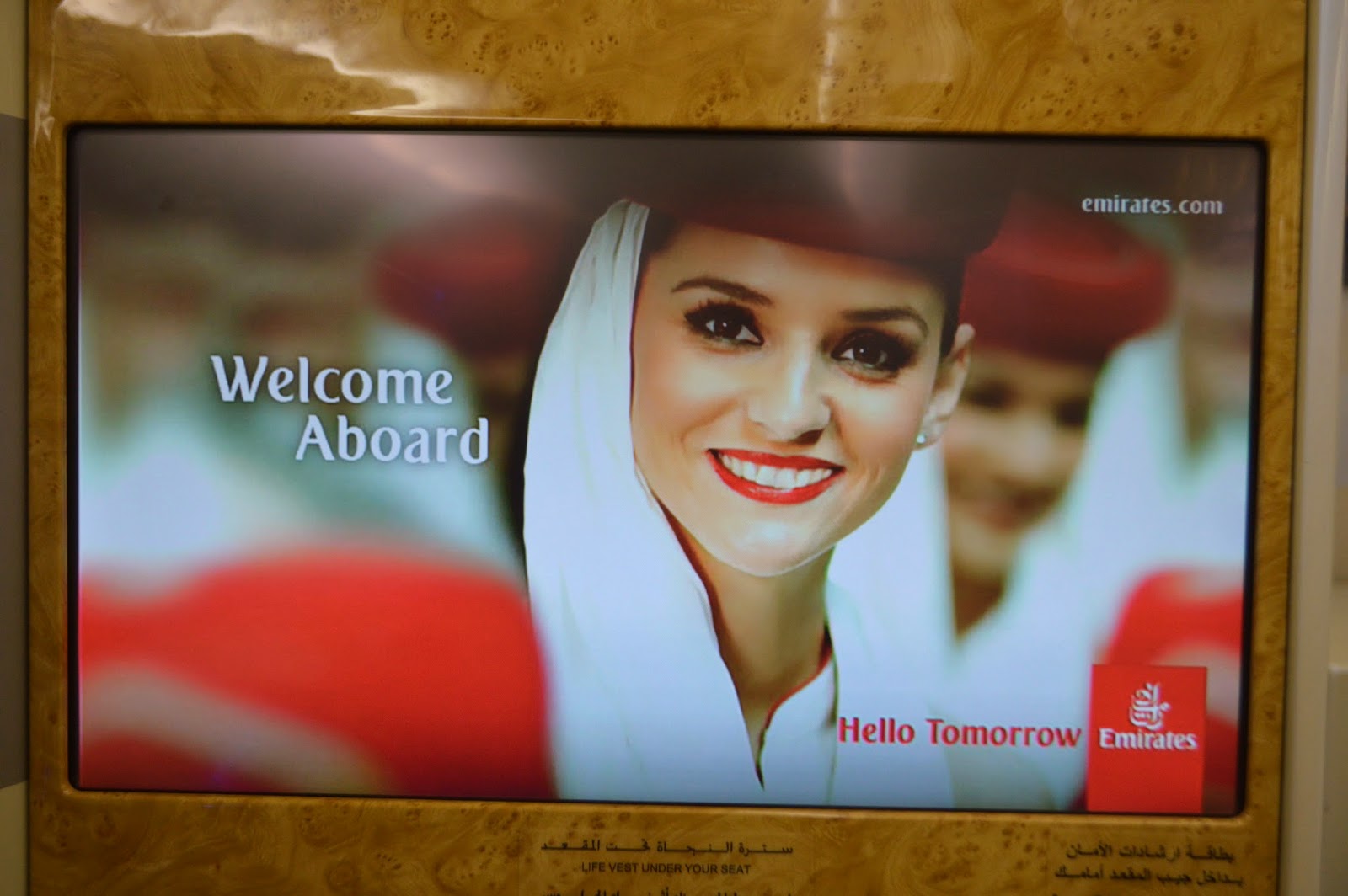 Unfortunately there was a delay due to an unruly passenger in the economy class cabin. The passenger had to be removed by security and his bags subsequently taken off. This resulted in about a 45 minute delay. All of this was happening on the lower deck and I couldn't see or hear anything. Meanwhile the Moet was kept topped up.

Eventually the apologetic Captain announced we were ready to go and we pushed back and  made a smooth departure. The A380 has such a unique feel during takeoff, it just feels big, and it's very smooth. A completely different feel to the Boeing 777.

Once we were safely  up in the sky and the seatbelt sign was turned off, the crew sprung into action setting up the beds for sleep and offering a drinks service. A mattress was placed over the seat to smooth it out when reclined into bed mode. 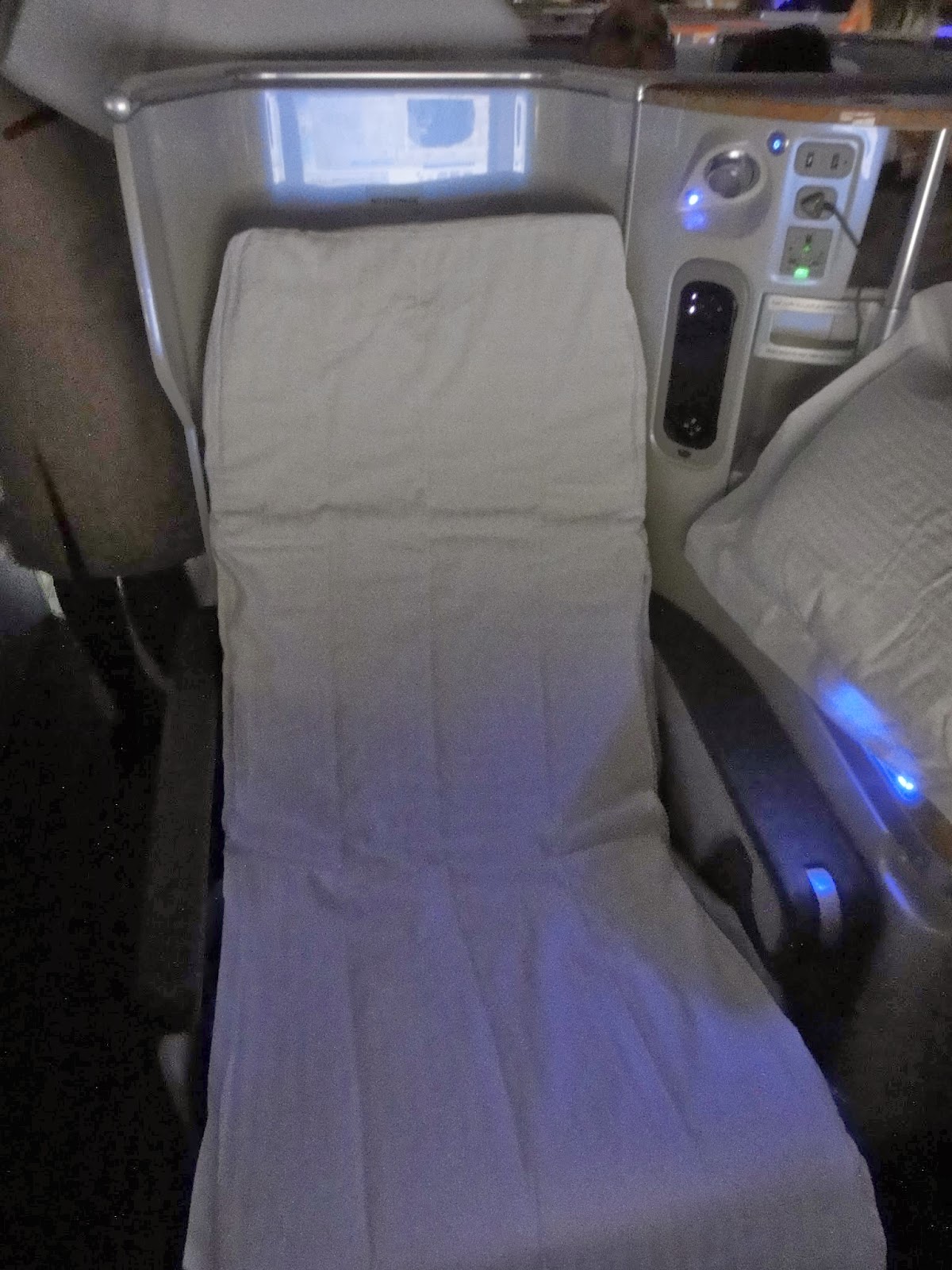 I ordered a glass of the Vasse Felix Sauvignon Blanc - Semillon from the menu, it was promptly delivered with a plate of nuts. All airlines that serve nuts in packets to business class passenger please take note of this photo: 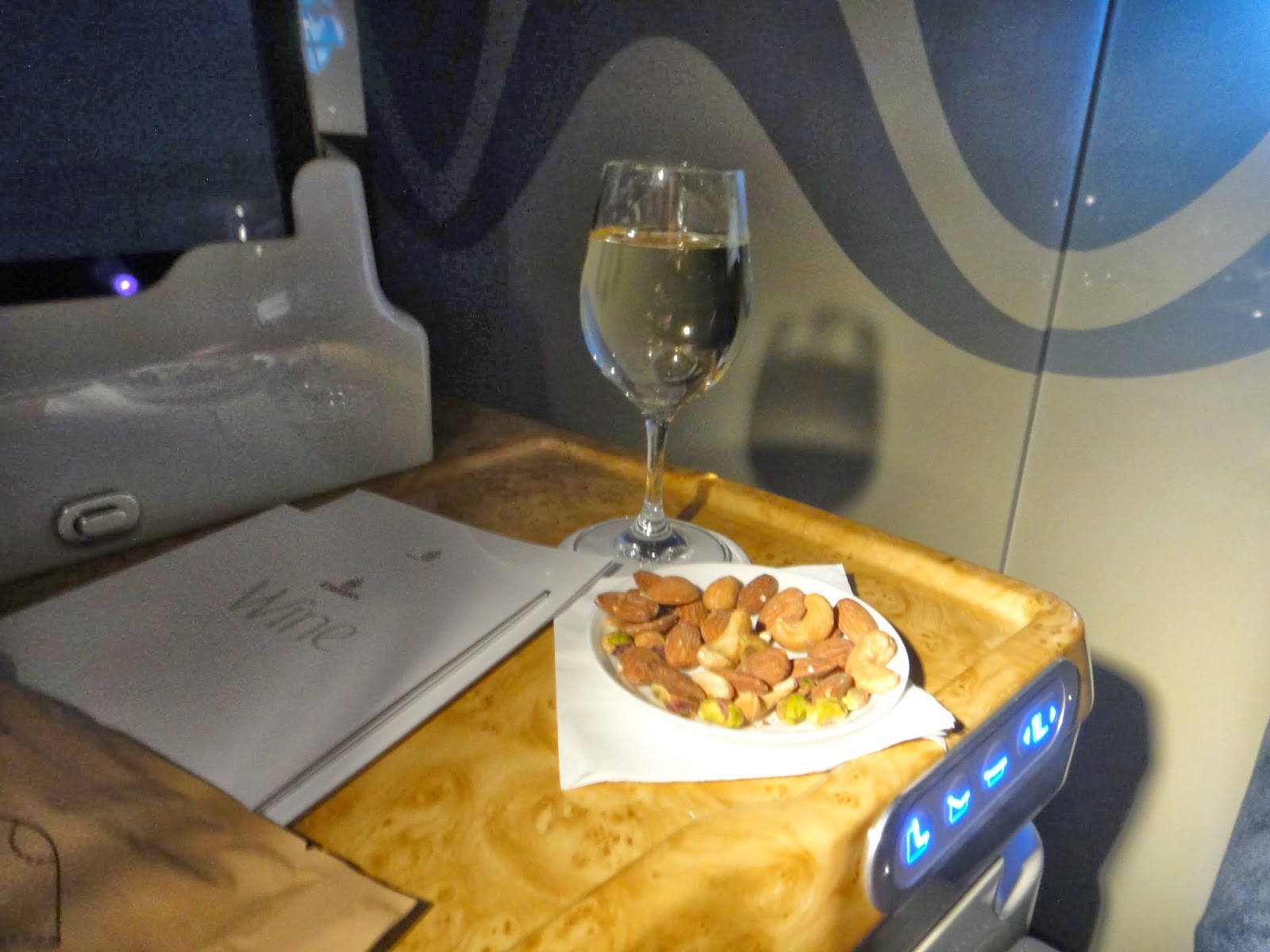 Looks a little better than a foil packet doesn't it?

Meanwhile at the back of the plane there were a few people up and about having a drink at the bar: 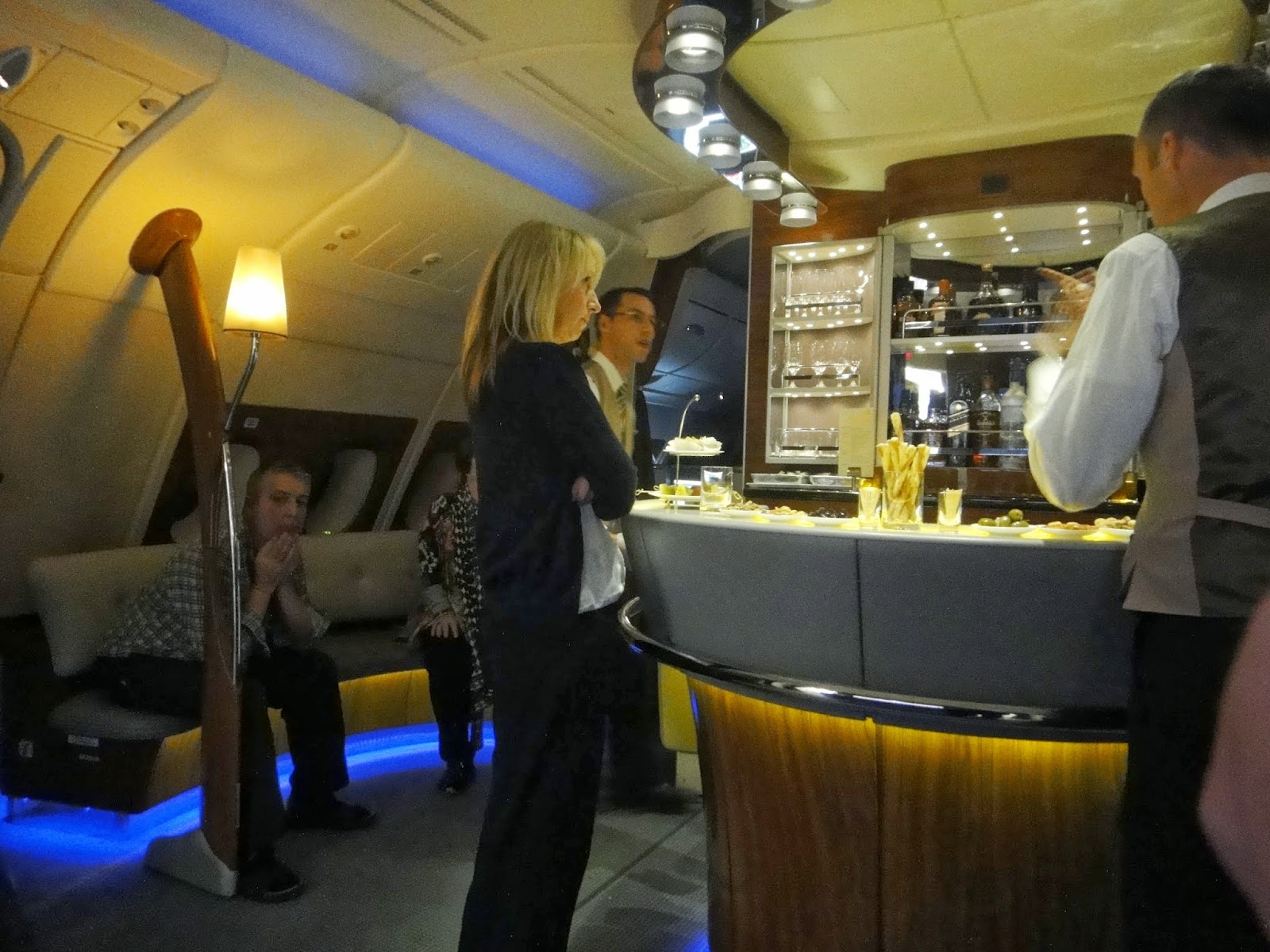 It's a rather special experience, the Emirates A380. There is nothing else like it in the sky.  The bar facility is superb, it feels like a bygone era of travel!

After a quick drink I headed back  to my seat and off to bed for a 2 and a half hour nap. When I woke up I went to stretch my legs and snapped a photo from one of the rear windows:

Although it was bright outside the cabin was going through it's mood lighting morning phase which went from darkness through an orange sort of sunset. It's a nice way to wake up. Another nice thing to wake up to is a cappuccino: 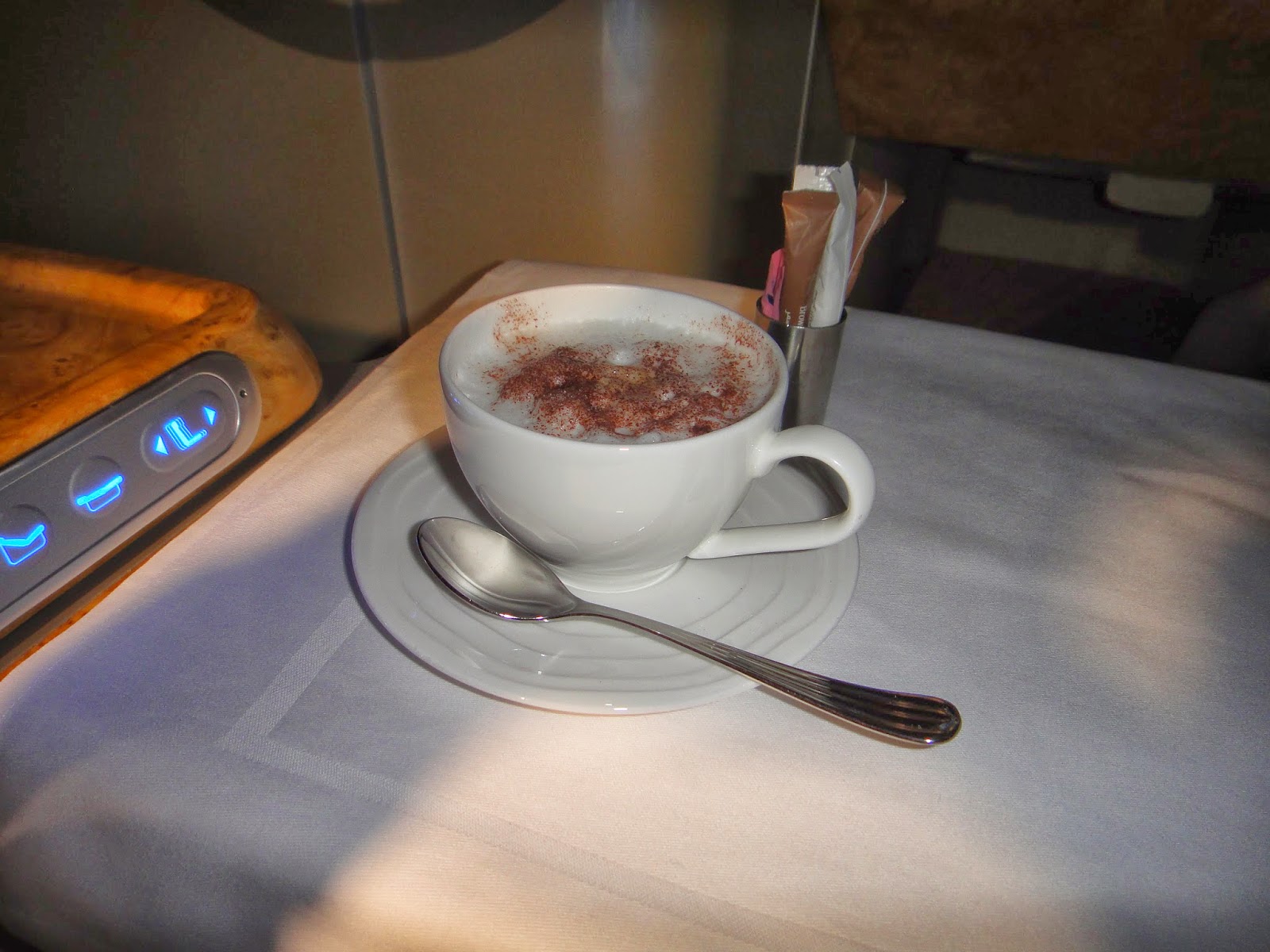 It's disappointing that Emirates go to the trouble of plating your nuts but don't do the same thing for yoghurt. It would look a lot nicer if it was in a small bowl.

Next up, the main course, I had chosen the Asian option which was stir fried egg noodles, a pork bun and some dumplings: 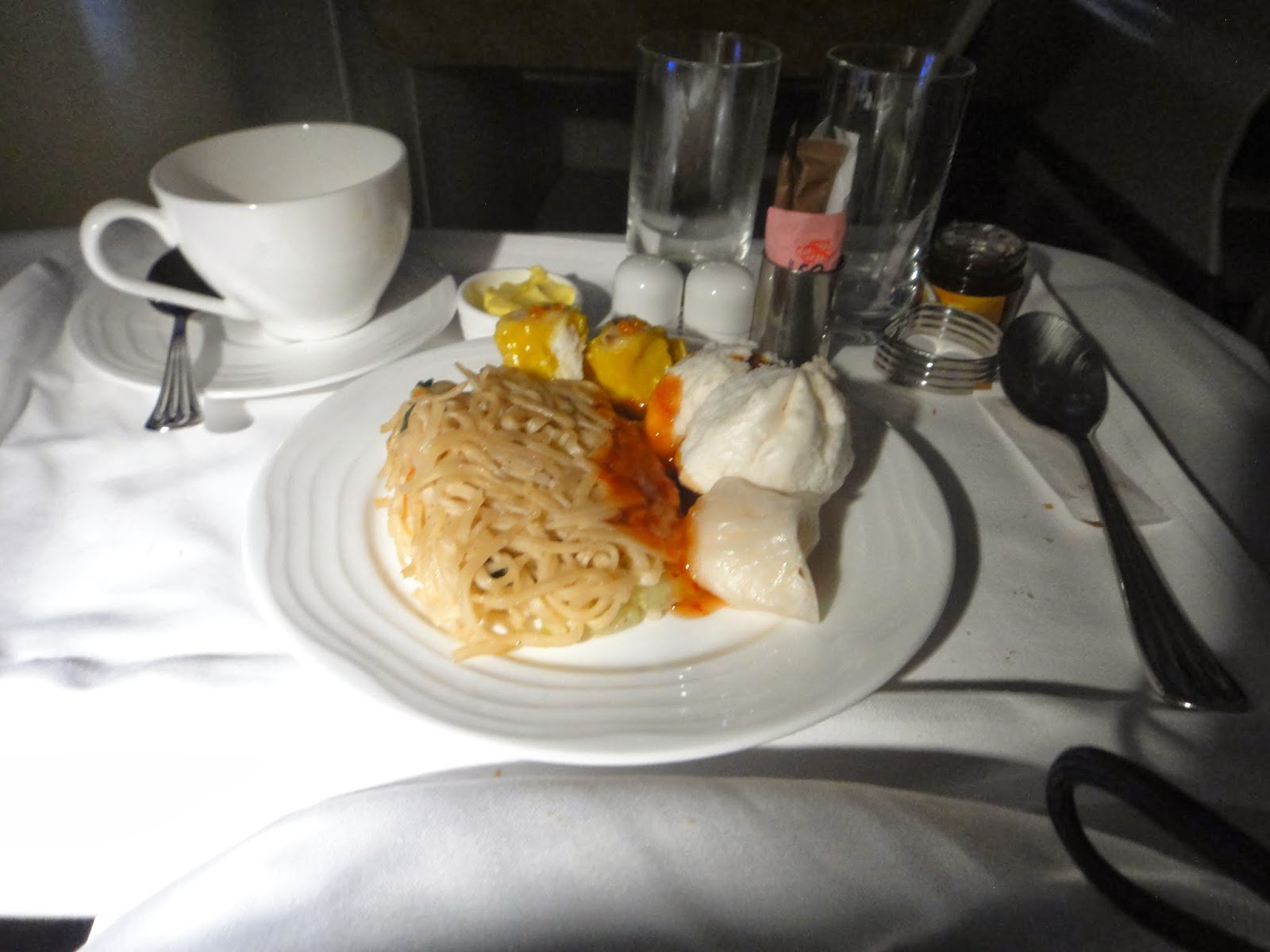 I'll be perfectly honest, the food wasn't brilliant. The noodles had no flavour. The prawn and pork dumplings were OK but I would prefer if they came with soy sauce. I didn't finish it but I wasn't that hungry anyway considering the massive meal I had consumed prior to boarding.

And time for a quick  visit to the lavatory with it's own window and faux wood: 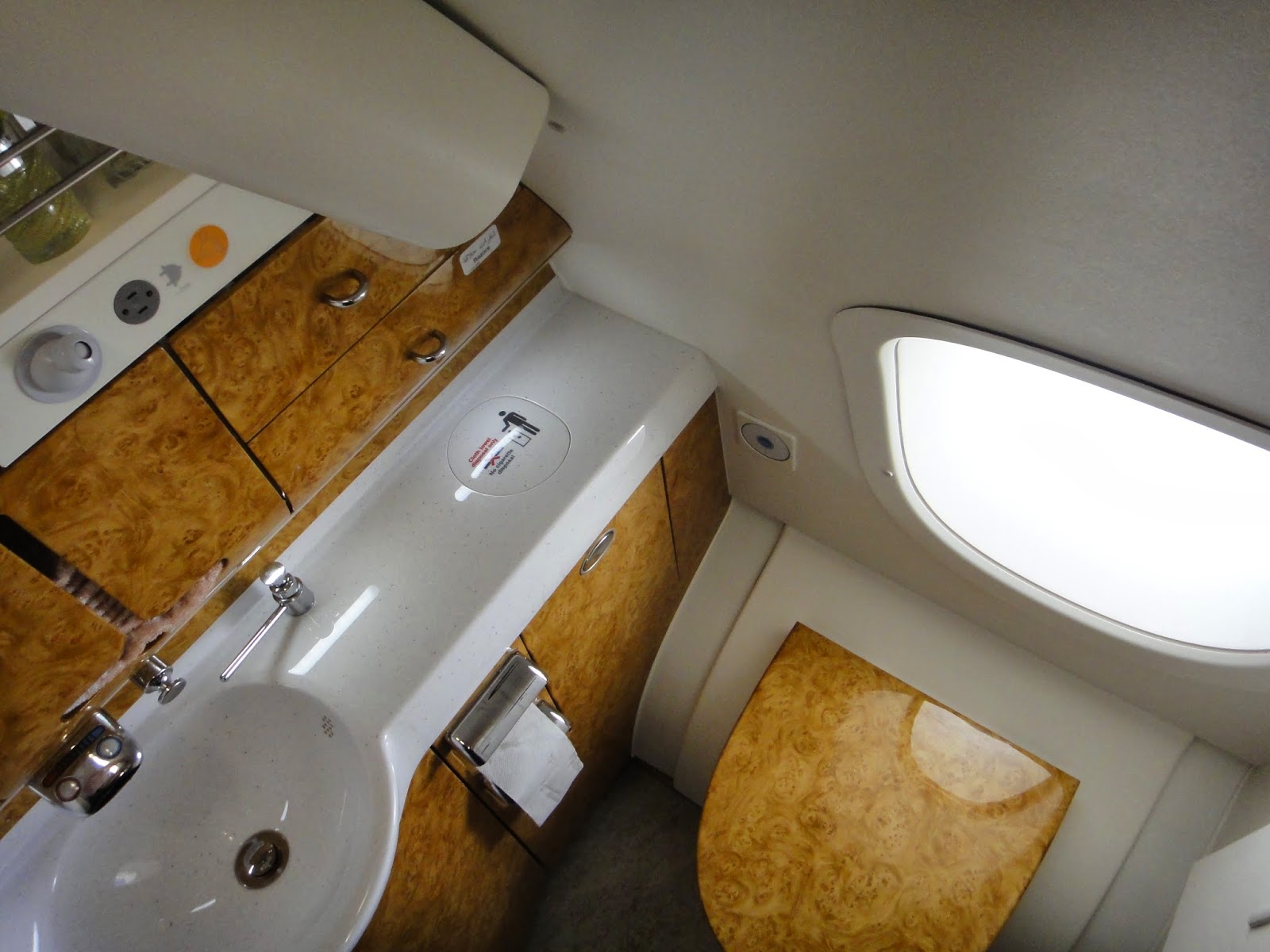 If you wanted a drink at the bar, too late, it's closed for today: 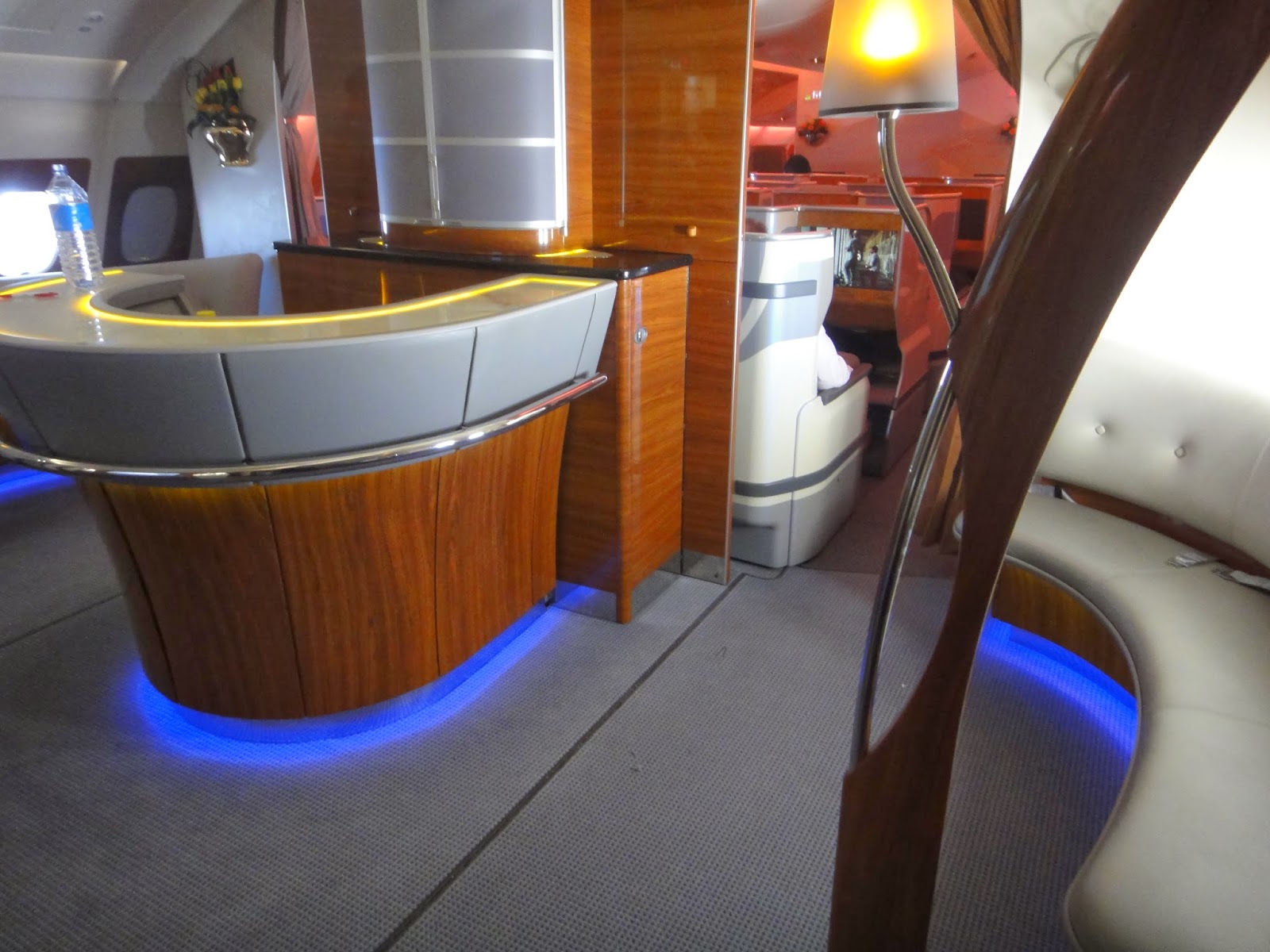 Soon enough we were on descent and I was glued to the screen watching the tail cam the whole time: 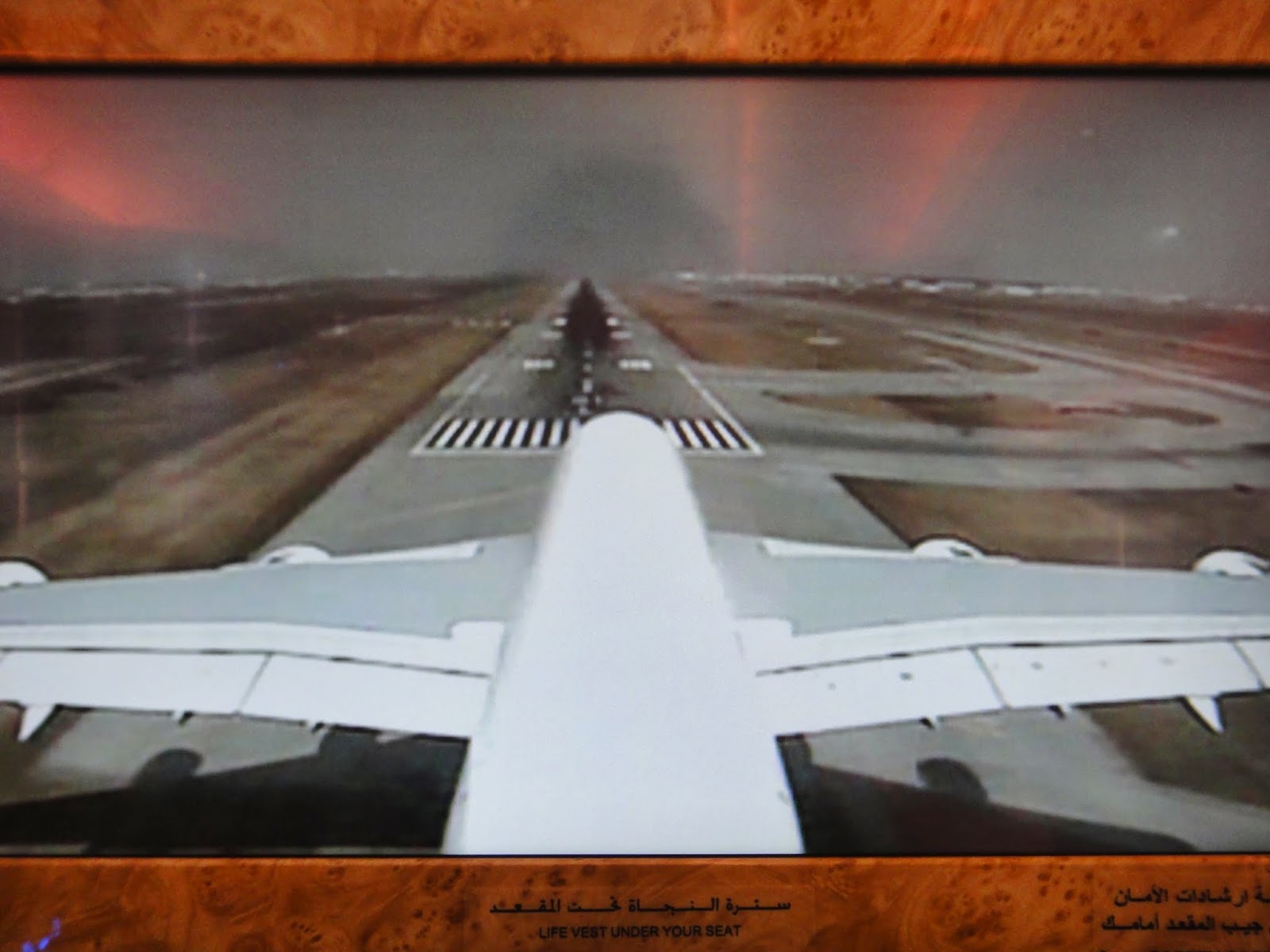 Overall a decent flight, although the food was pretty average the service remained great throughout. I just love the Emirates A380 experience. The seats are excellent, the on board bar facility is amazing, the inflight entertainment system is probably the best in the world. It is definitely one of the best ways to travel at the moment.