- June 06, 2014
On my recent 'flyventures' I had an opportunity to sample the new regional business class offering of Cathay Pacific. Whilst I say new, it is in fact already a bit over a year old, but it is the latest product offering from Cathay for regional flights. This product is used on short to medium haul flights, I think services to India/Pakistan/Sri Lanka may be about the longest flights that feature this product. 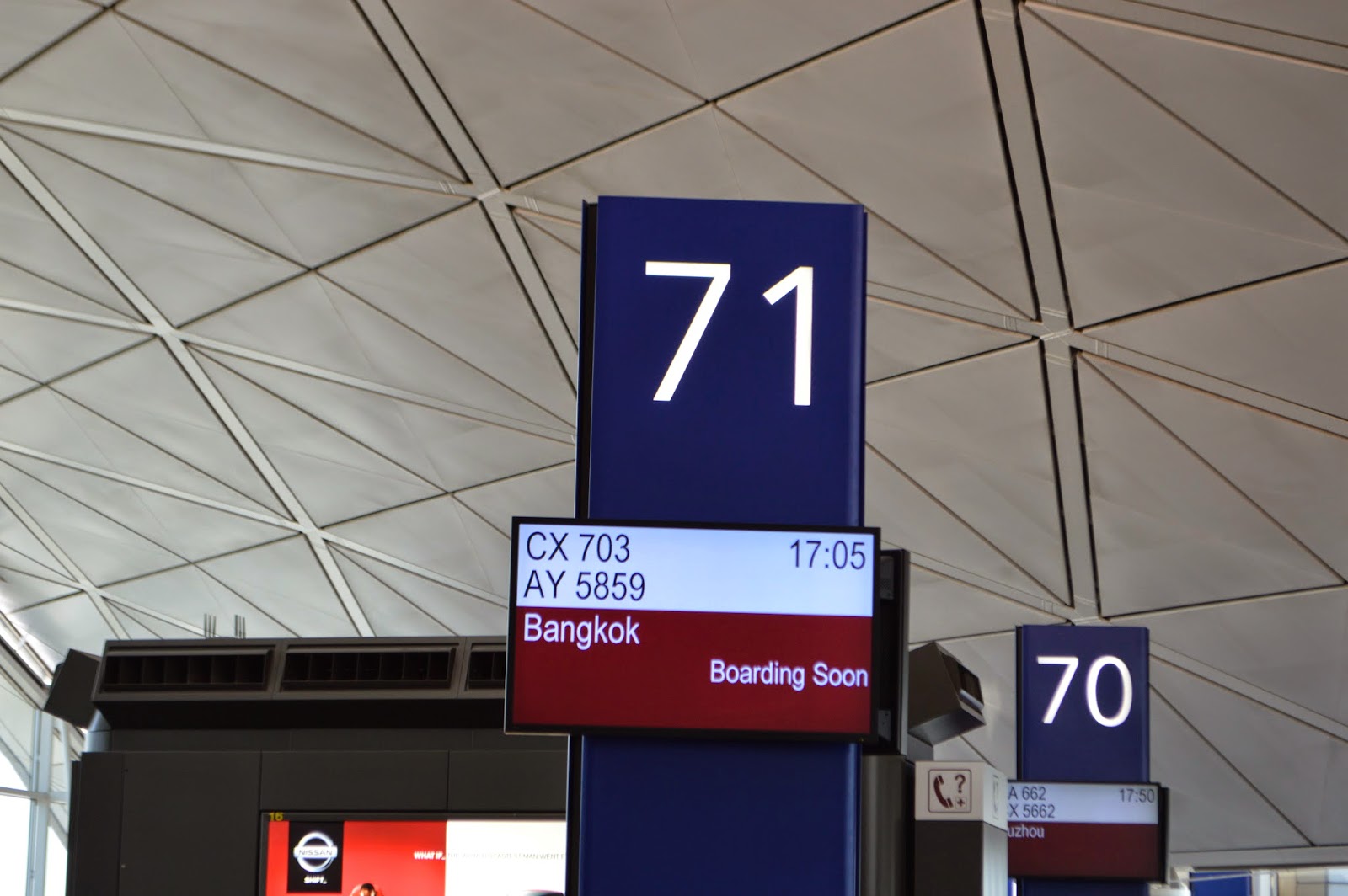 The aircraft was scheduled to depart from gate 71 where I arrived at the scheduled boarding time, having come from the nearby 'The Pier' lounge. Unfortunately I was greeted with a large queue  and a staff member advising there was a delay to boarding as the cabin was extremely hot and it needed to be cooled down. Why this couldn't have been done in advance I do not know, but I did know it was very hot outside, about 32 degrees celsius. 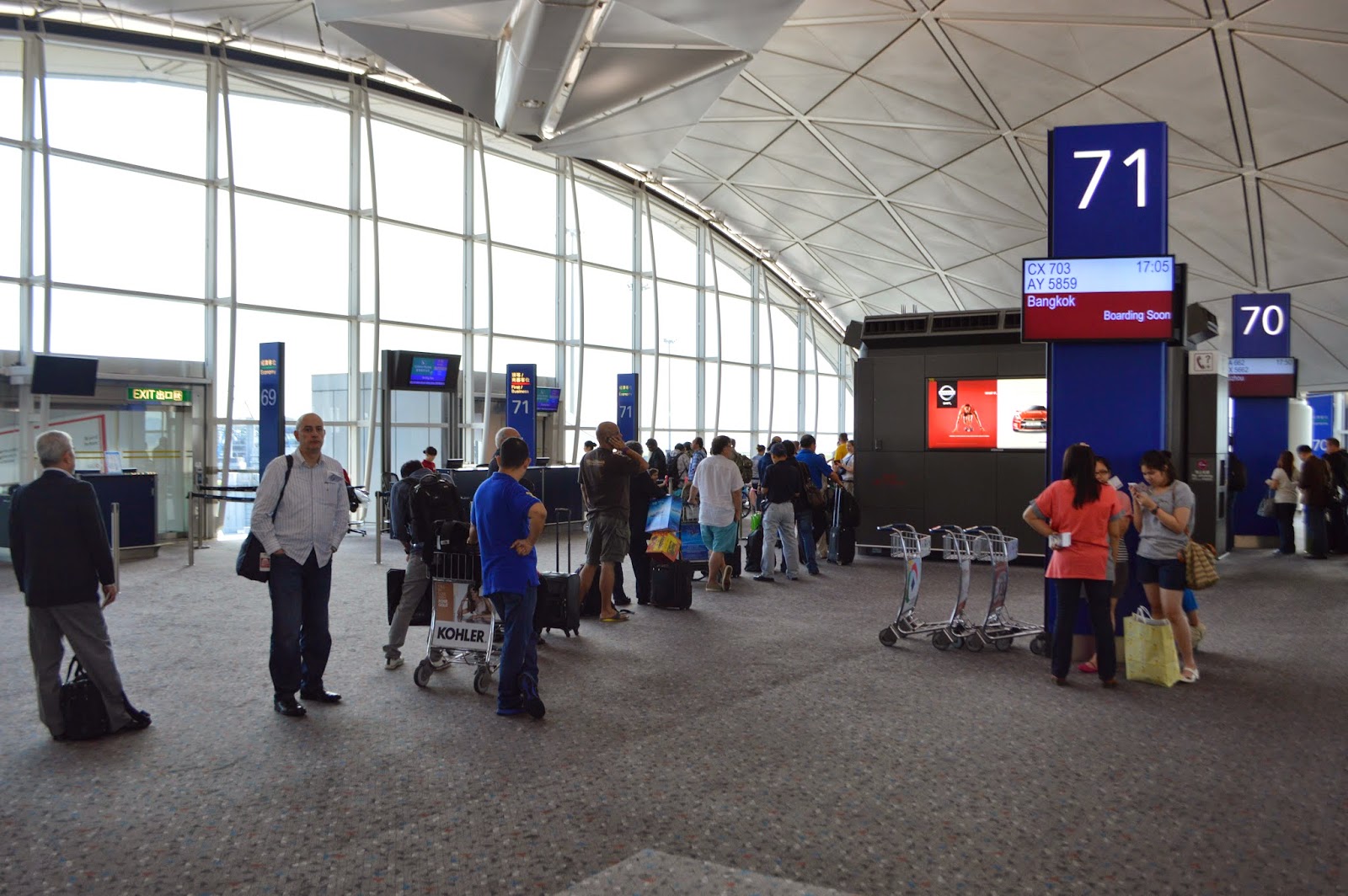 After about a further 10 minutes boarding was finally announced. With only one jetway in use the staff were quite strictly enforcing priority boarding much to the disgust of a Russian family who were being held back from boarding at the economy queue. She actually got quite angry with the staff member who tried to explain to her the priority boarding procedure. I guess if you don't understand and you had been standing at the front of the queue for quite some time you might get annoyed. 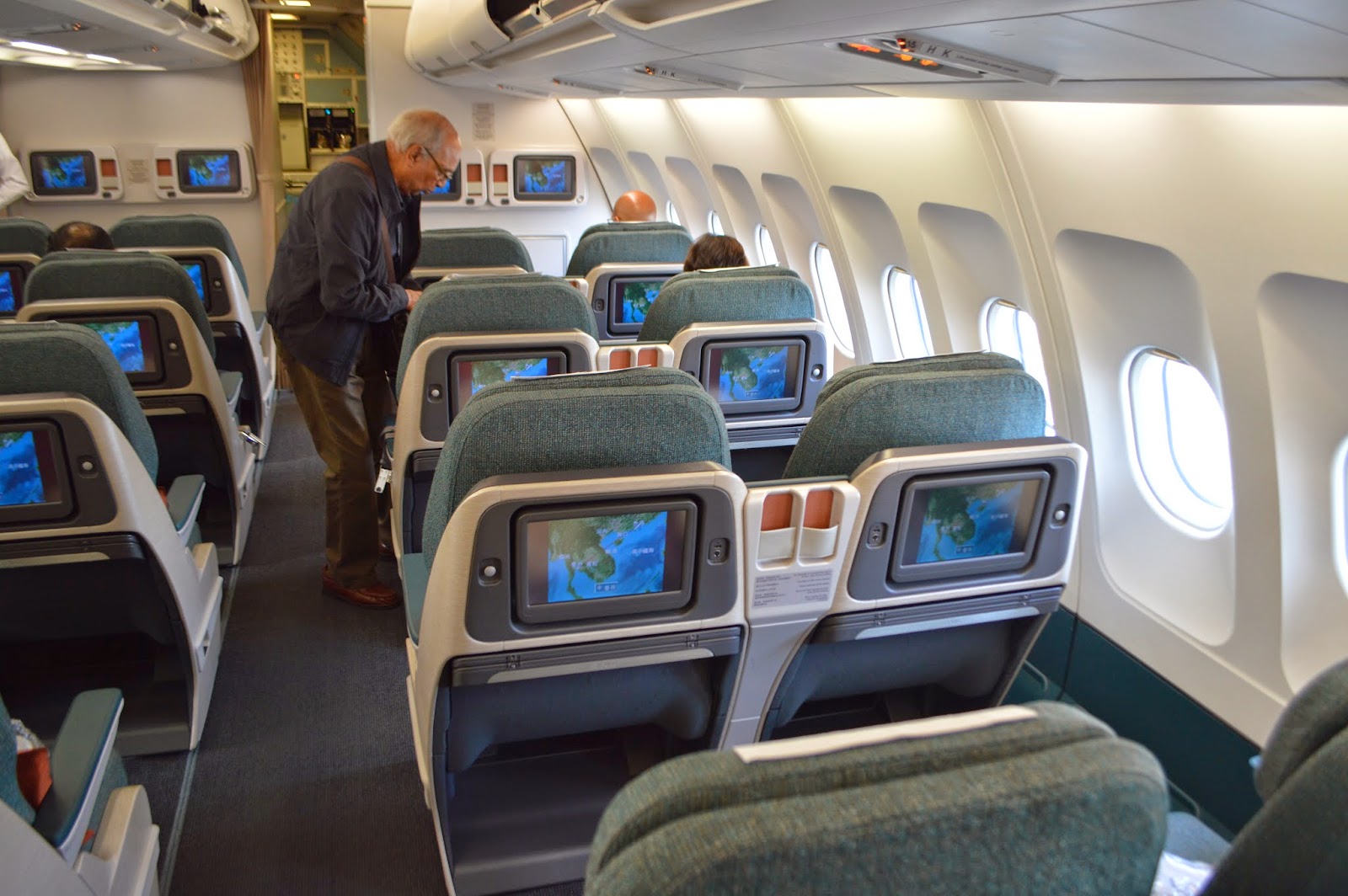 I had selected a window seat in the fifth row.  The cabin was less than half full despite the fact that 2 other services to Bangkok had been cancelled that day. The thai military had just announced a coup a few days earlier in Thailand so many people had cancelled or rescheduled their flights,  particular since a 10pm curfew was in place on the day I  flew.

A blanket and pillow were available on every seat. As you can see above the new cabin features a simple recliner style seat with a fairly decent seat pitch. It is perfectly decent for a 2 hour sector like this one. There is an AVOD screen on the back of every seat too. 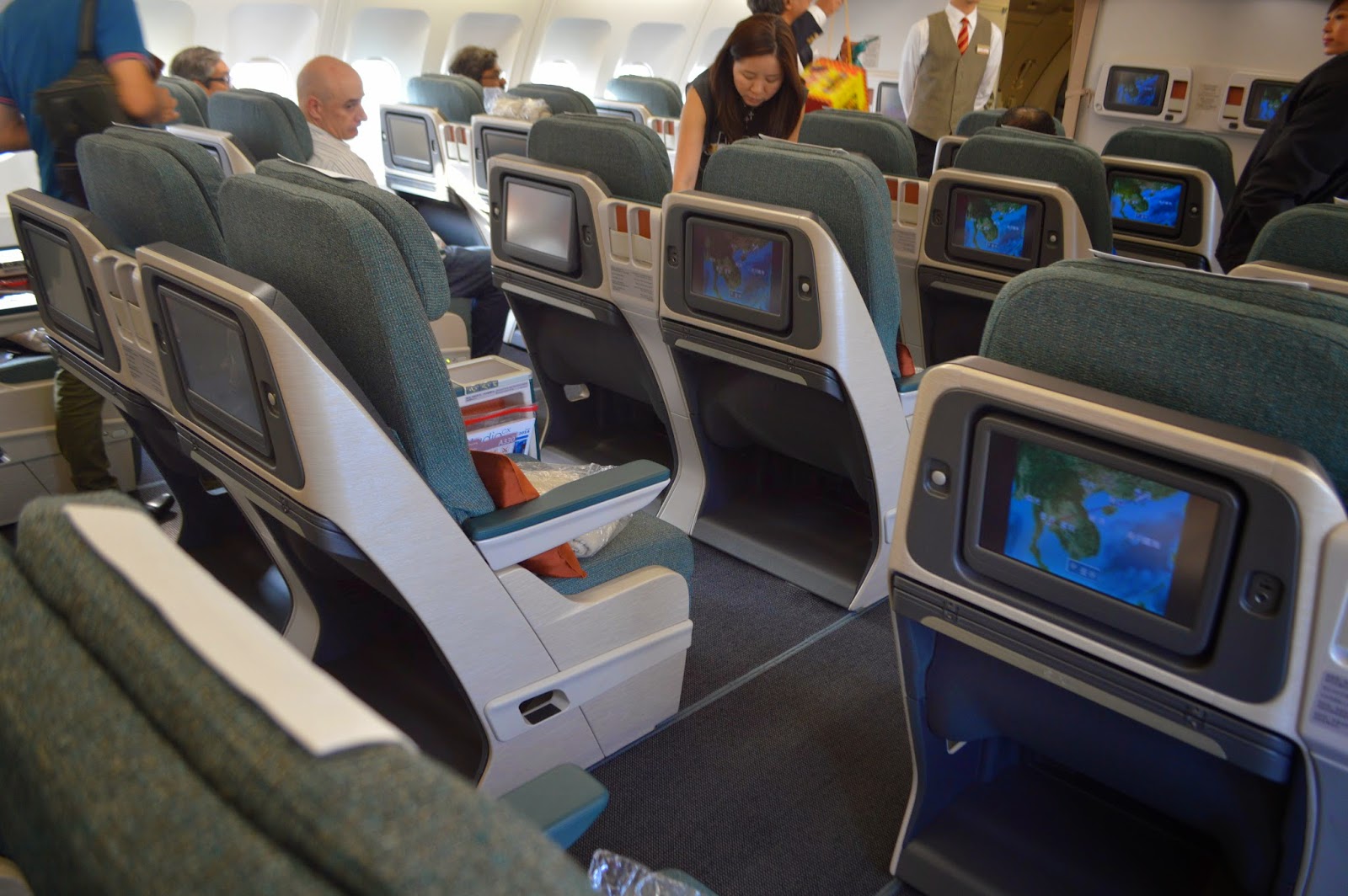 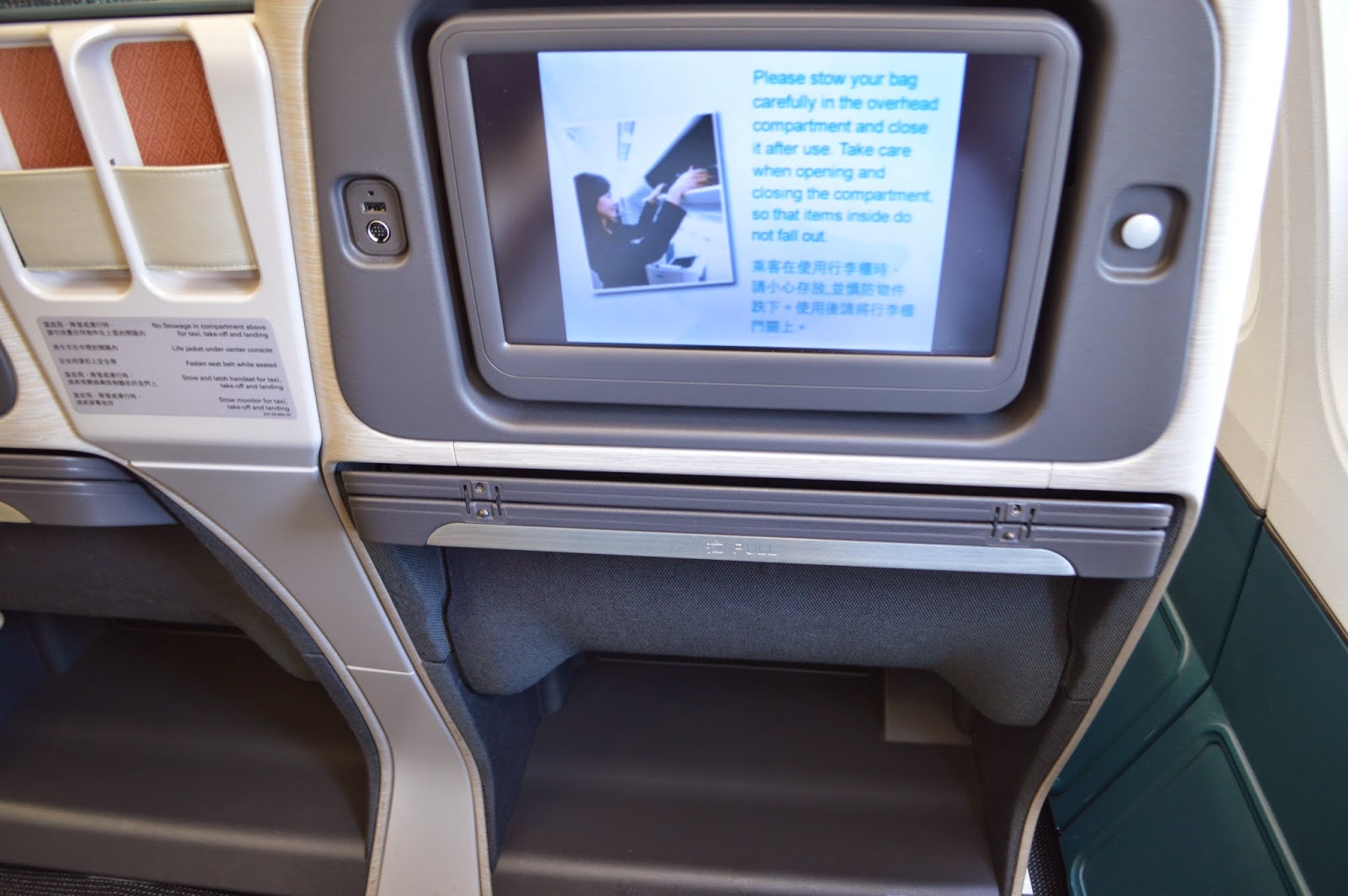 The cabin was still quite hot although not unbearable. The cabin manager, a pleasant Filipino lady came over to introduce herself and gave me a warm greeting by name. She profusely apologised for the delayed boarding to which I replied that it was no problem at all!

Welcome drinks were offered and I had a glass of Billecart-Salmon brut Champagne. It is a decent enough drink and I finished it off pretty quickly. Soon enough we were pushing back and making our way to the runway. There was a bit of a delay waiting for about 4 other aircraft to depart ahead, but eventually we lifted off on what was a fairly clear afternoon weather wise. 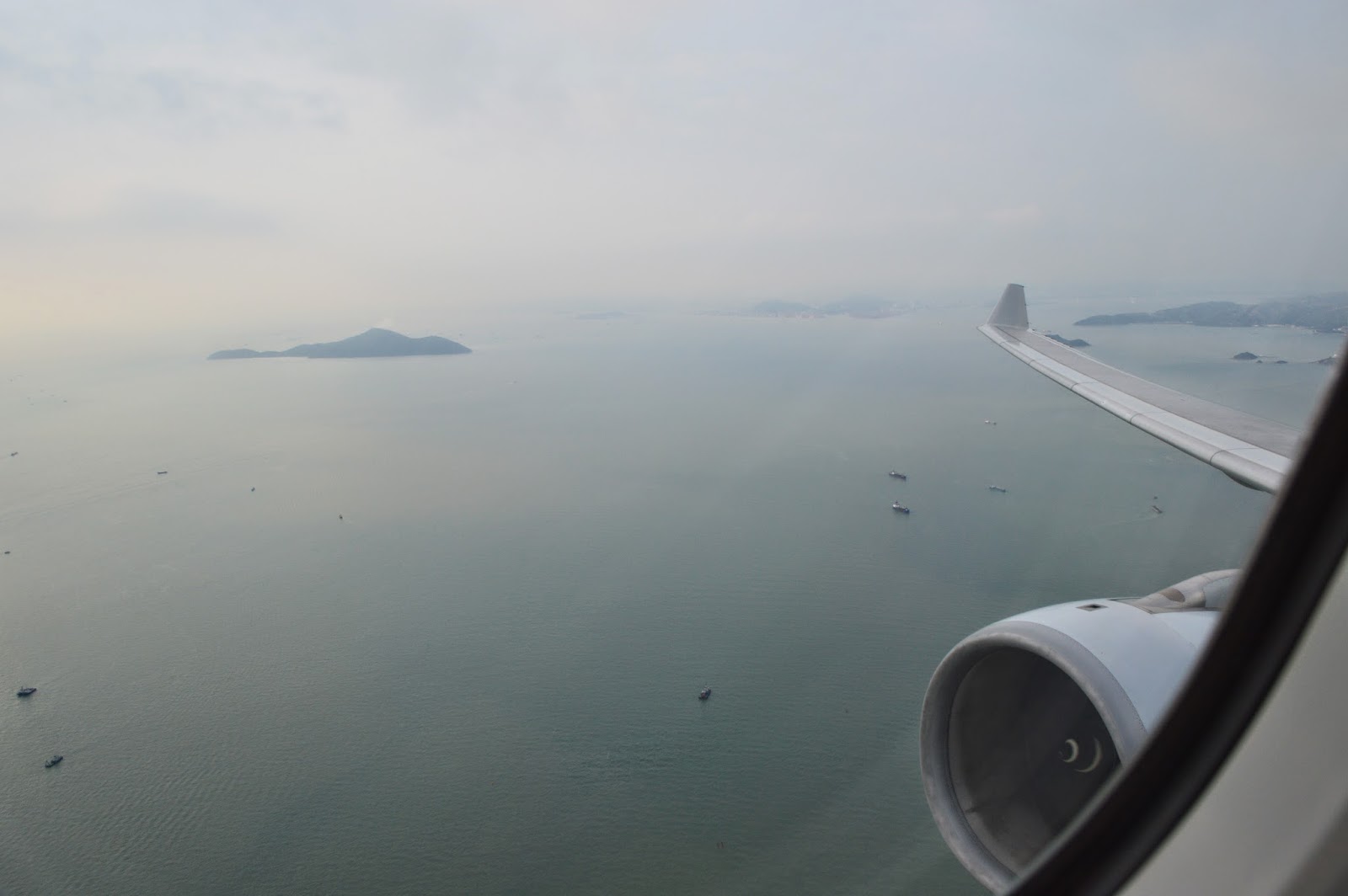 Let's have a look at the menu for the dinner service: 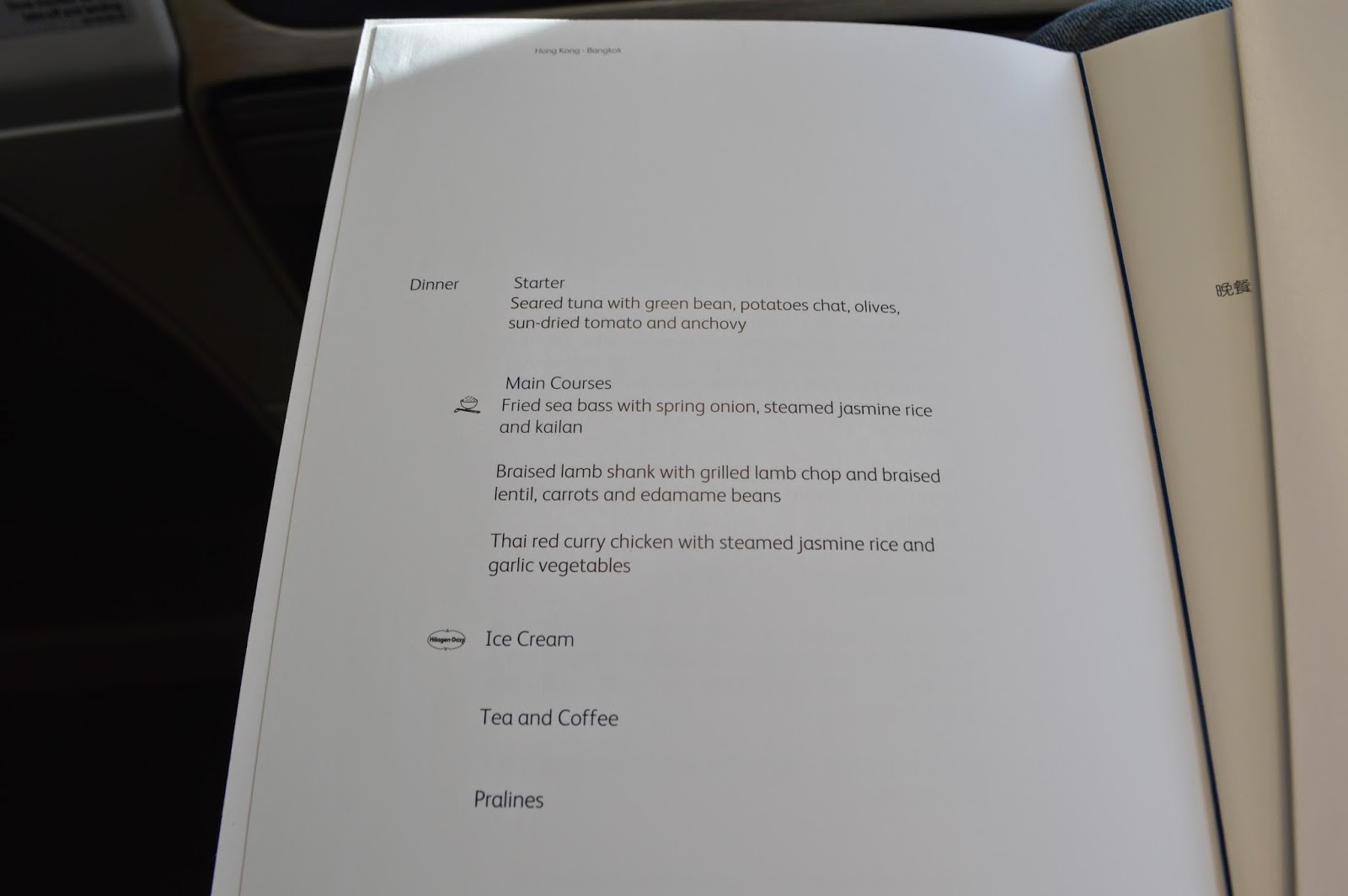 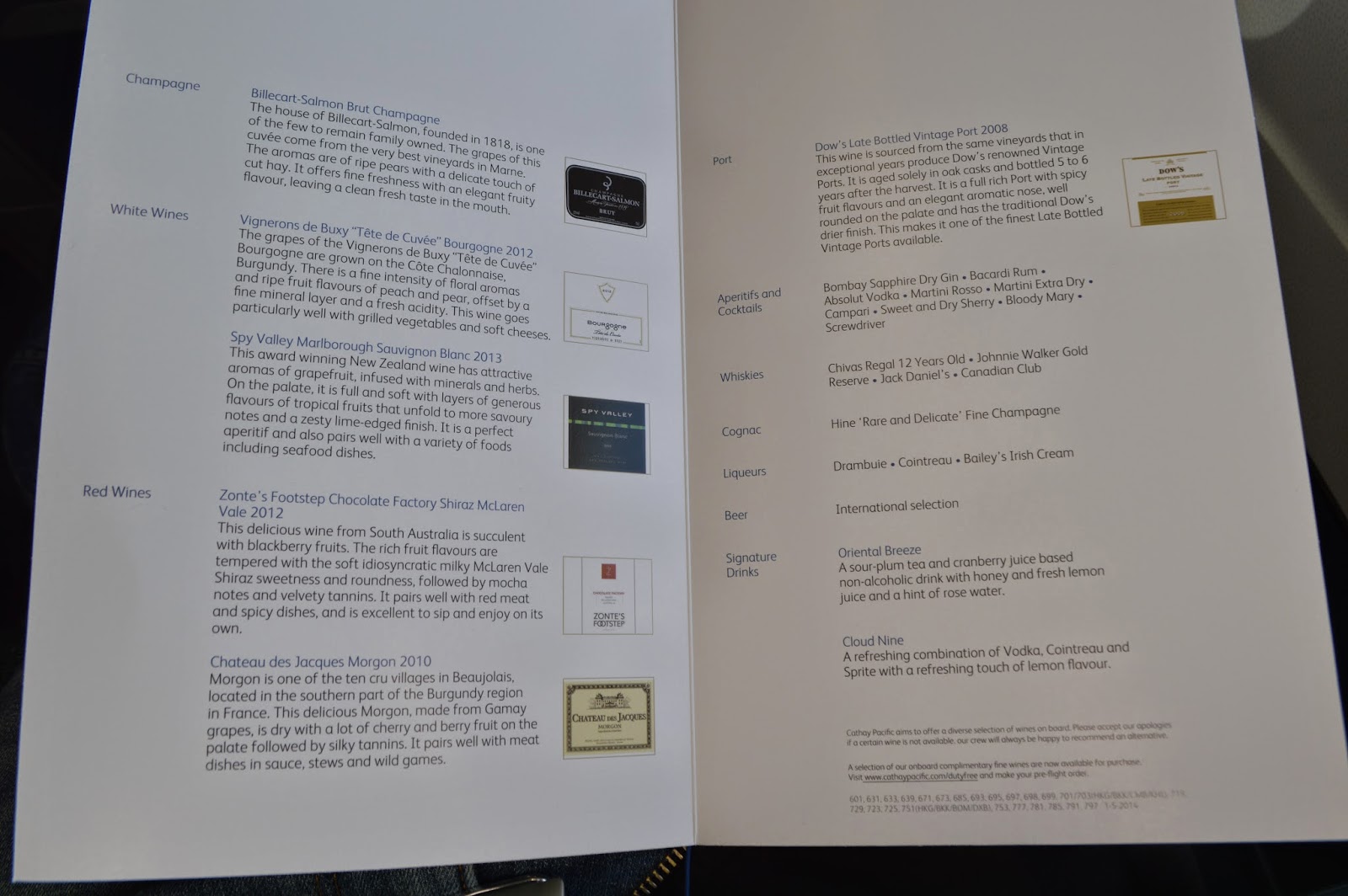 Unfortunately another fish based \starter, the obsession airlines have on providing salmon and tuna appetisers is starting to become quite tiresome, I really don't like either of them. Never mind, I decided I would see how the tuna was anyway. I pulled out the fairly flimsy tray table from the seat in front... 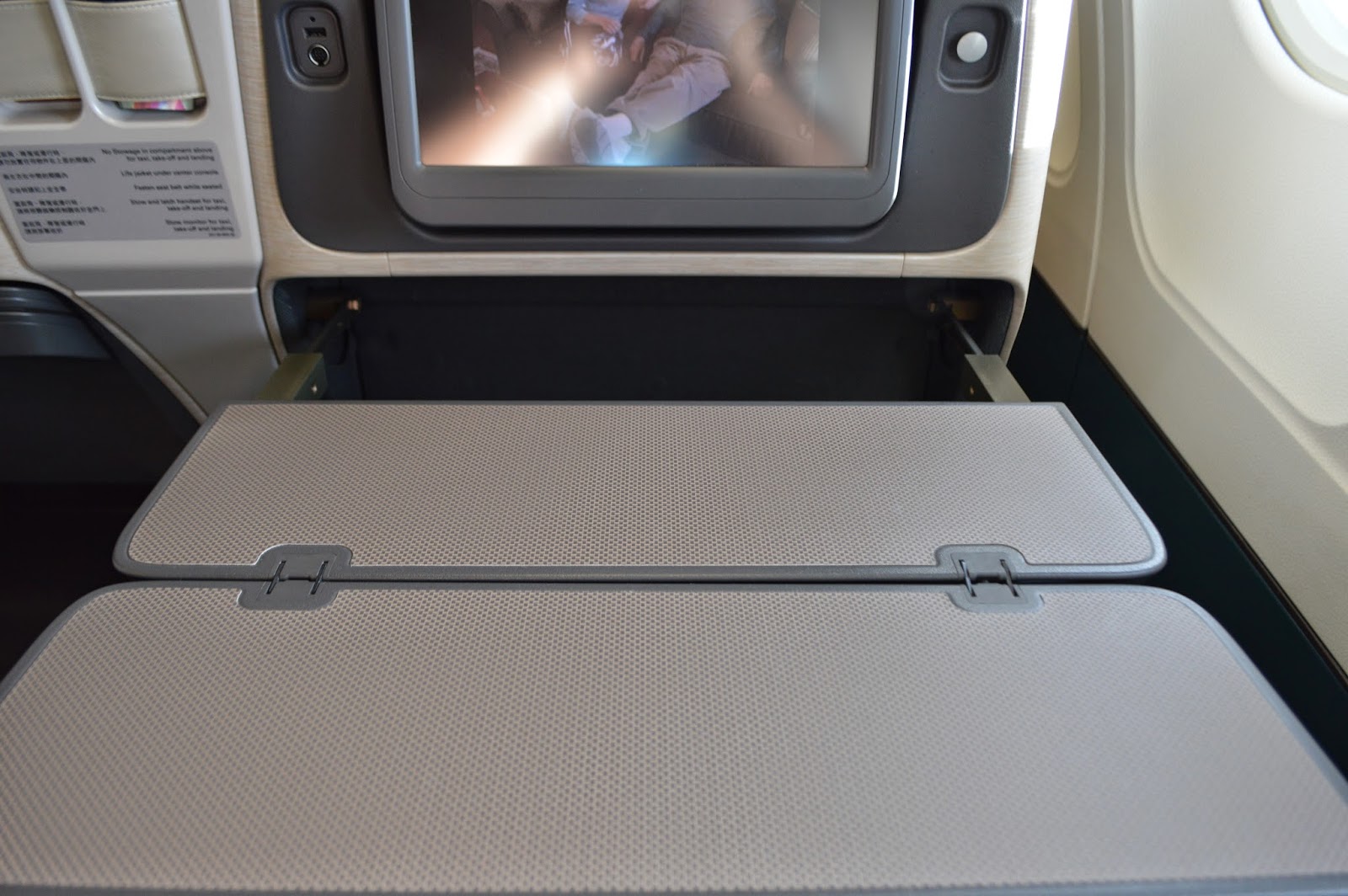 I ordered the 'signature' non alcoholic cocktail called 'Oriental Breeze' as my pre-dinner drink. It came back from the galley looking like this: 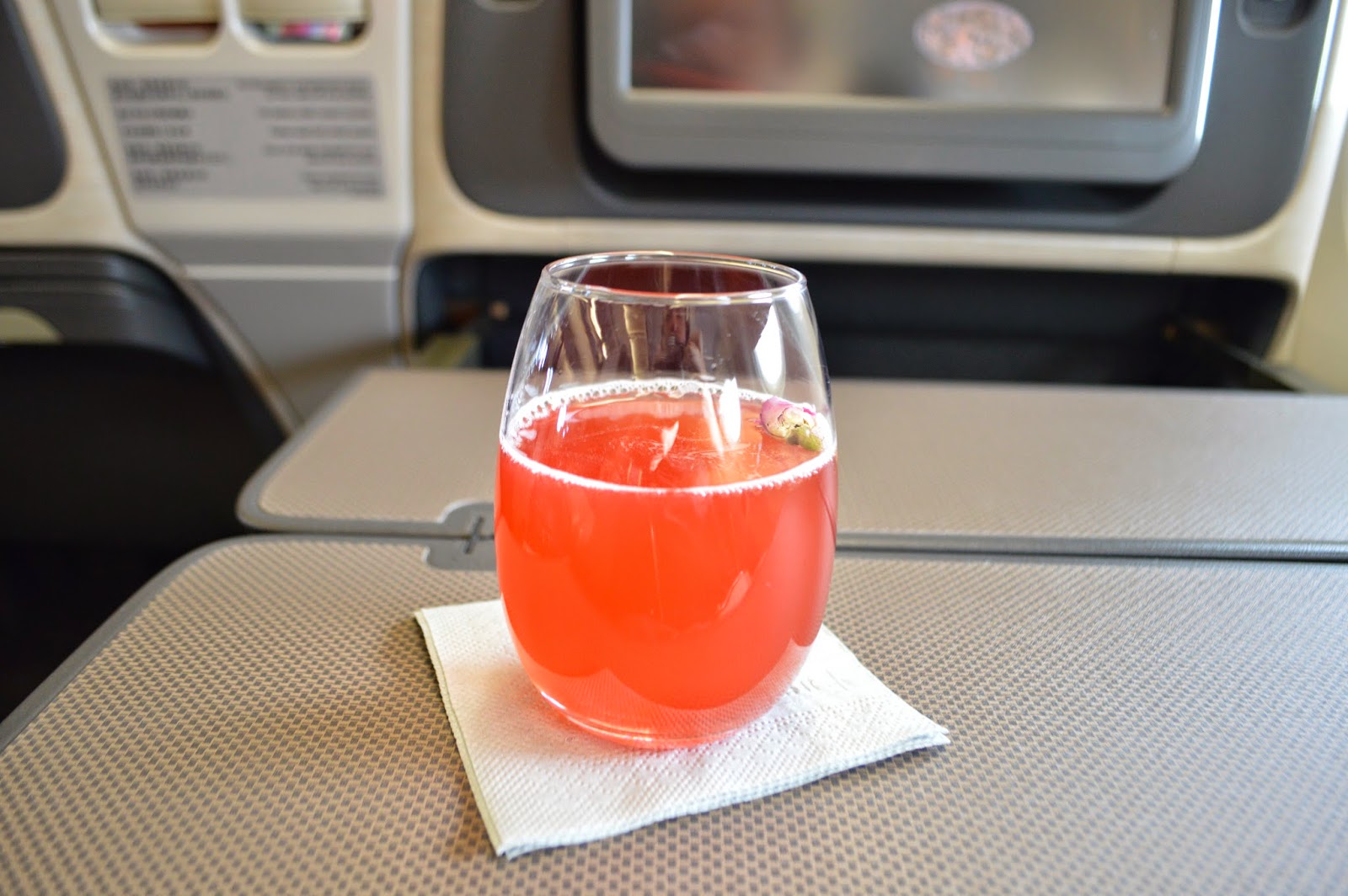 It was quite tasty although not very  cold. There was no nuts or other snack on offer with the drink.

A short time later the dinner was served, I opted for the Thai red curry chicken, since we were flying to Thailand I may as well enjoy the local cuisine. A selection of breads was offered from a basket and I took the garlic bread. Here is how the meal looked:

I was drinking the Sauvignon Blanc wine with the main meal. It was decent and I received a top up without asking which is how it should be. The chicken was pretty tasty and I finished it off, the tuna I pretty much left there.

Once I had finished the main course, the tray was cleared and a short time later a trolley appeared with a selection of Haagen Dazs ice creams. I took the cookies and cream and ordered a Baileys on ice to go along with it. A perfect combination in my opinion: 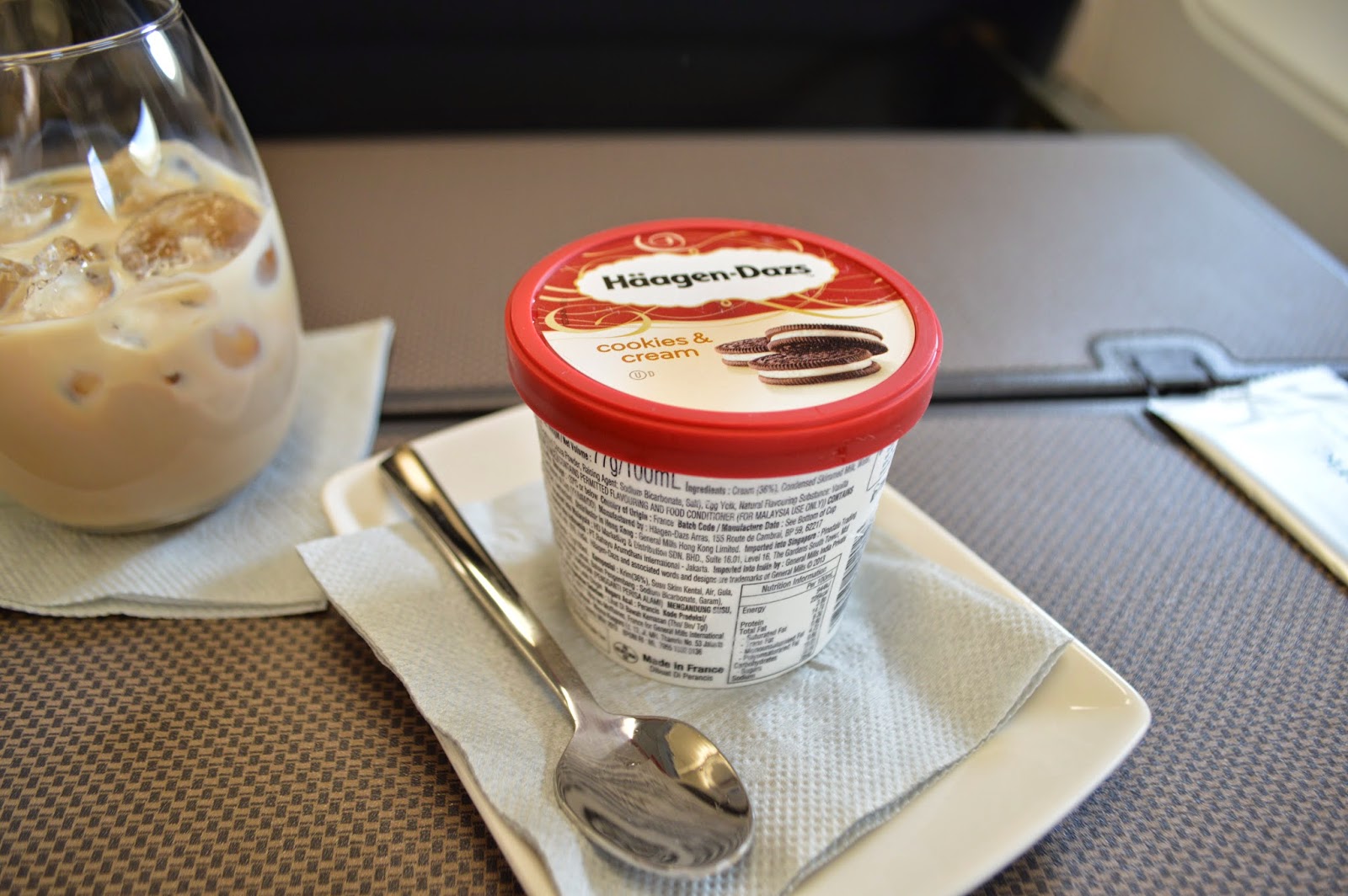 The service was polite and efficient and I was kept entertained with the audio video on demand system. If you were planning to watch a movie though  you can forget it on this sector. The shortness of the flight meant that only the TV programs part of the system were available for use.

By this stage we had crossed the Vietnamese coast and were heading towards Cambodia. There was a number of large cumulo-nimbus clouds towering into the sky but the pilots made a few changes of course to ensure we didn't enter them. 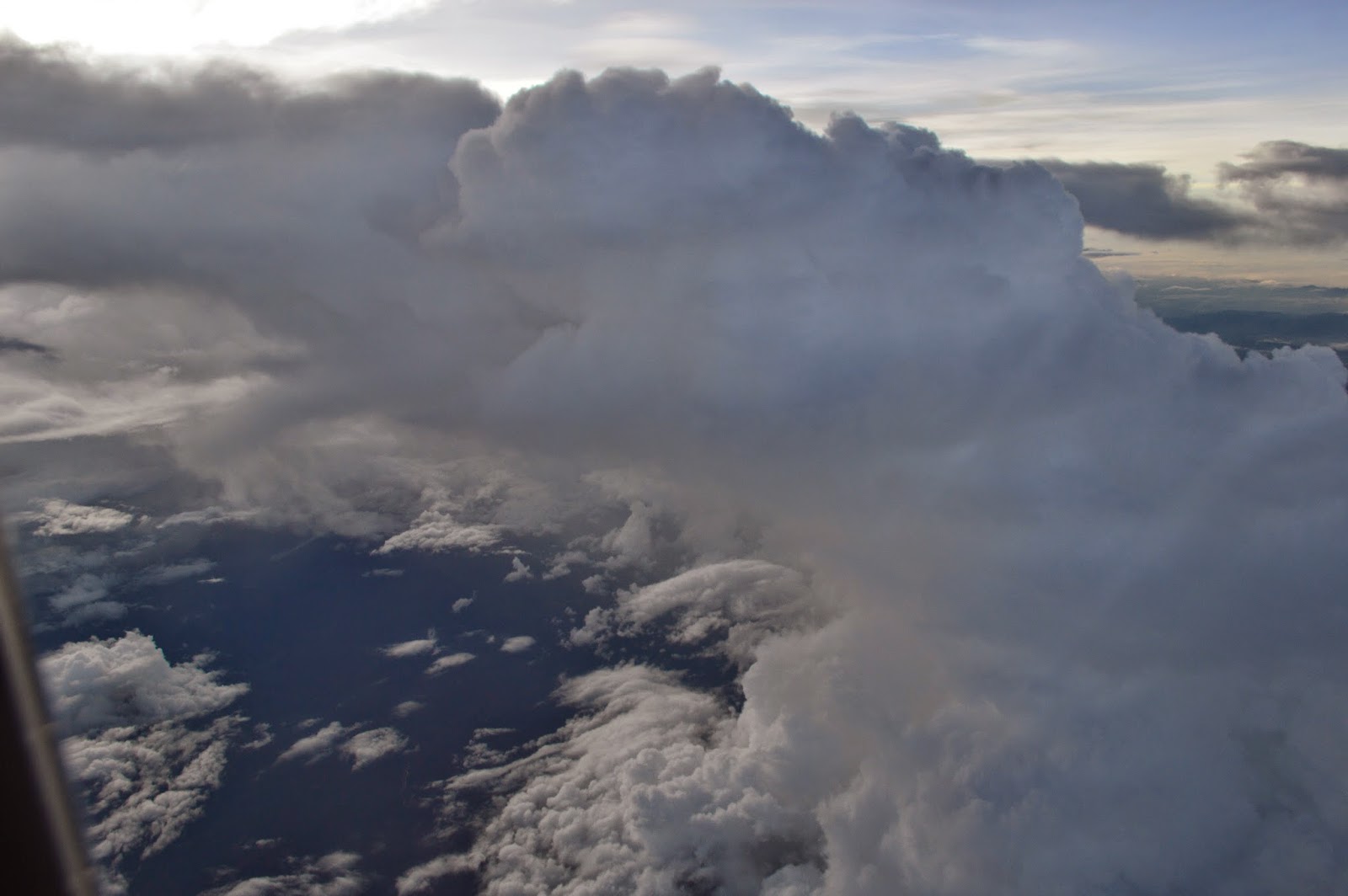 The pilot announced the descent with a predicted on time arrival, the weather in Bangkok was 32 degrees with showers  in the area. By the time we landed though the showers had passed and the weather was good with little to no turbulence. We made our way to the end of F concourse and parked. For those passengers continuing to Karachi they should stay on board, as it turned out there was only 6 or so of us in business class who were getting off in Bangkok

Overall a good flight, decent crew with a reasonable meal. It's a basic regional service which I find quite good for the length of the flight. Although the seat had limited recline I found it perfectly comfortable and the entertainment system had plenty to offer even without the movies. Certainly a good way to get around Asia.