- July 31, 2014
As part of a trip to Europe recently I wanted to try and fly on something a little bit different. Whilst researching ways to get from London to Munich I found a route sold by Air Berlin from Stansted to Munich via Dusseldorf with the first leg being flown by Etihad Regional on a Saab 2000! With so few Saab 2000's in operation, and certainly none in Australia, I jumped at the chance. As it turns out I flew on the first day of Etihad Regional operations to London's Stansted Airport.

I took the train from London to Stansted which was convenient, fast and easy  (although I think expensive at approx $40 AUD one way, next time I need to book in advance): 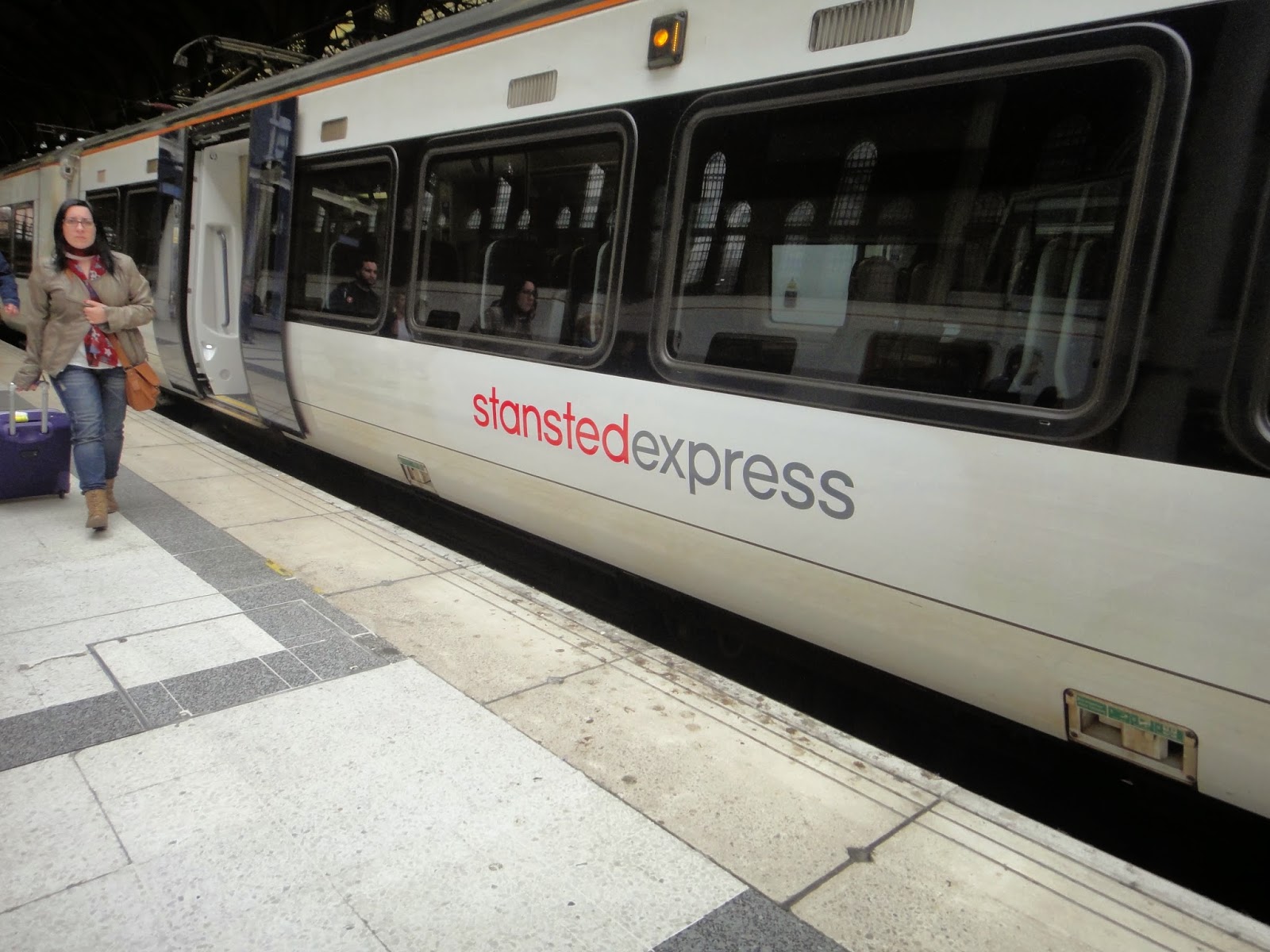 I arrived at Stansted airport and looked for my flight among the sea of Ryanair and Easyjet departures: 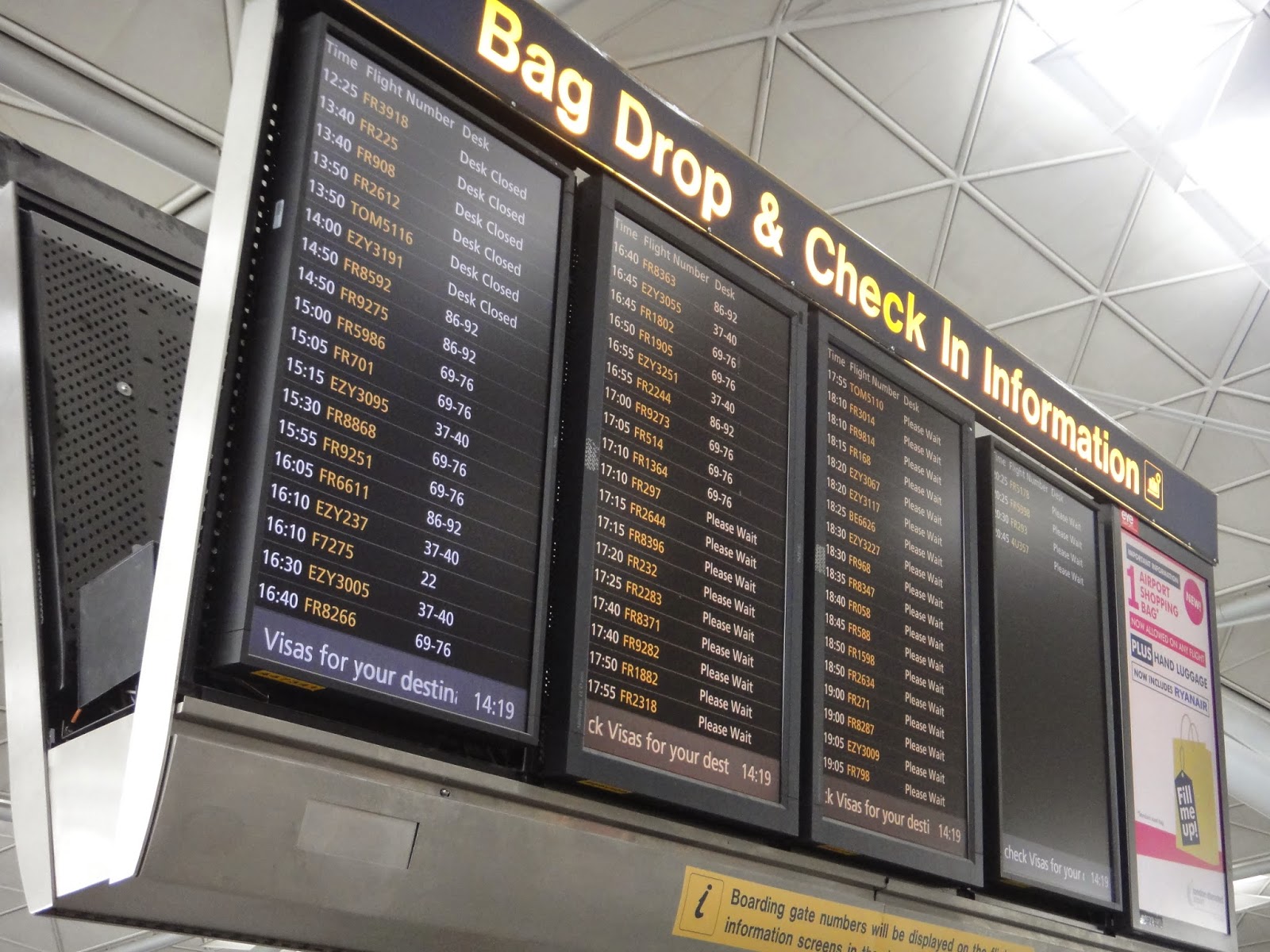 The Etihad Regional (Air Berlin codeshare) flight was checking in at counter 22, and here it is: 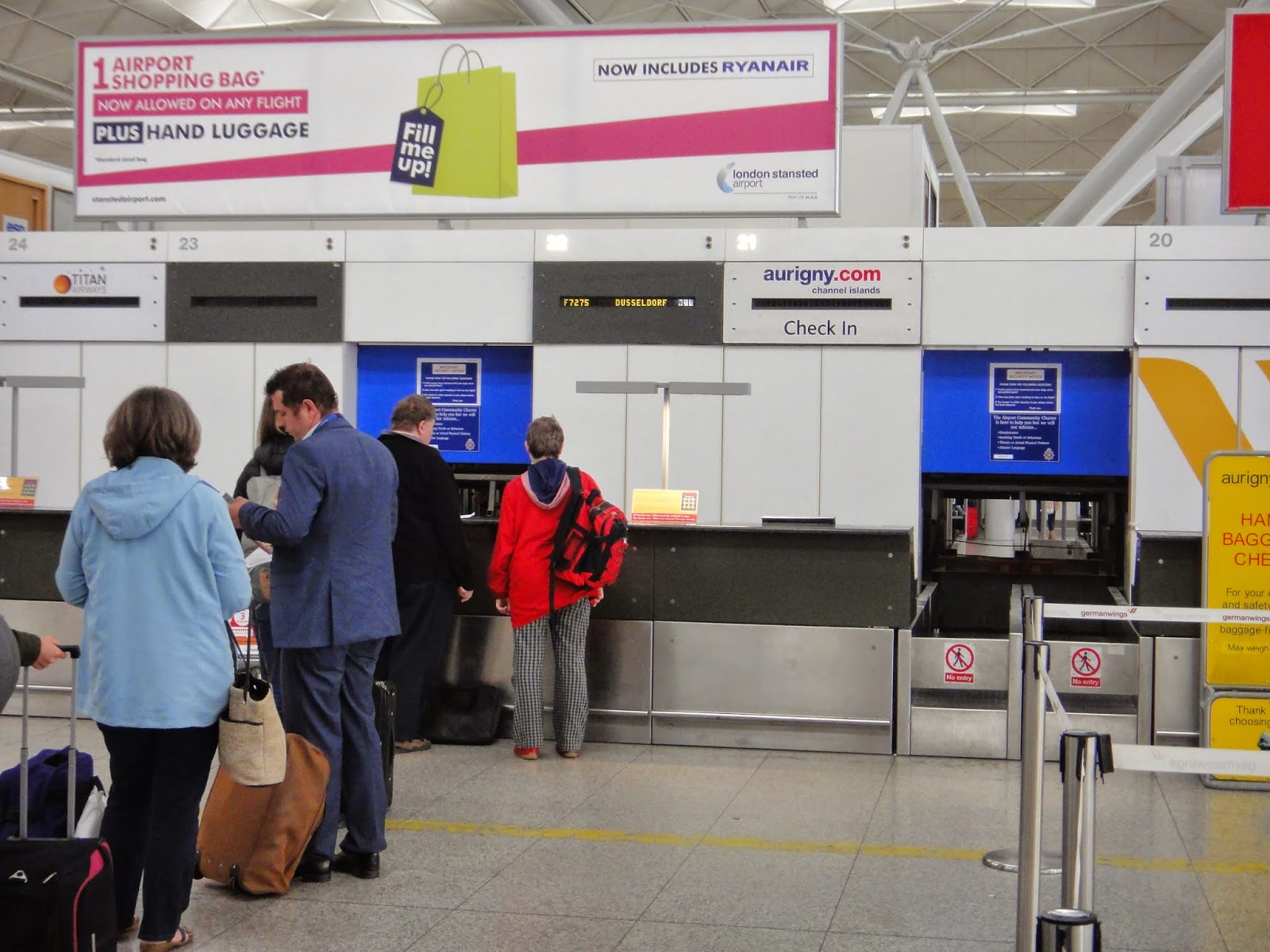 Just one lonely counter with not even so much as a logo to distinguish it from the other counters, hopefully they have put up some better signage since I flew. 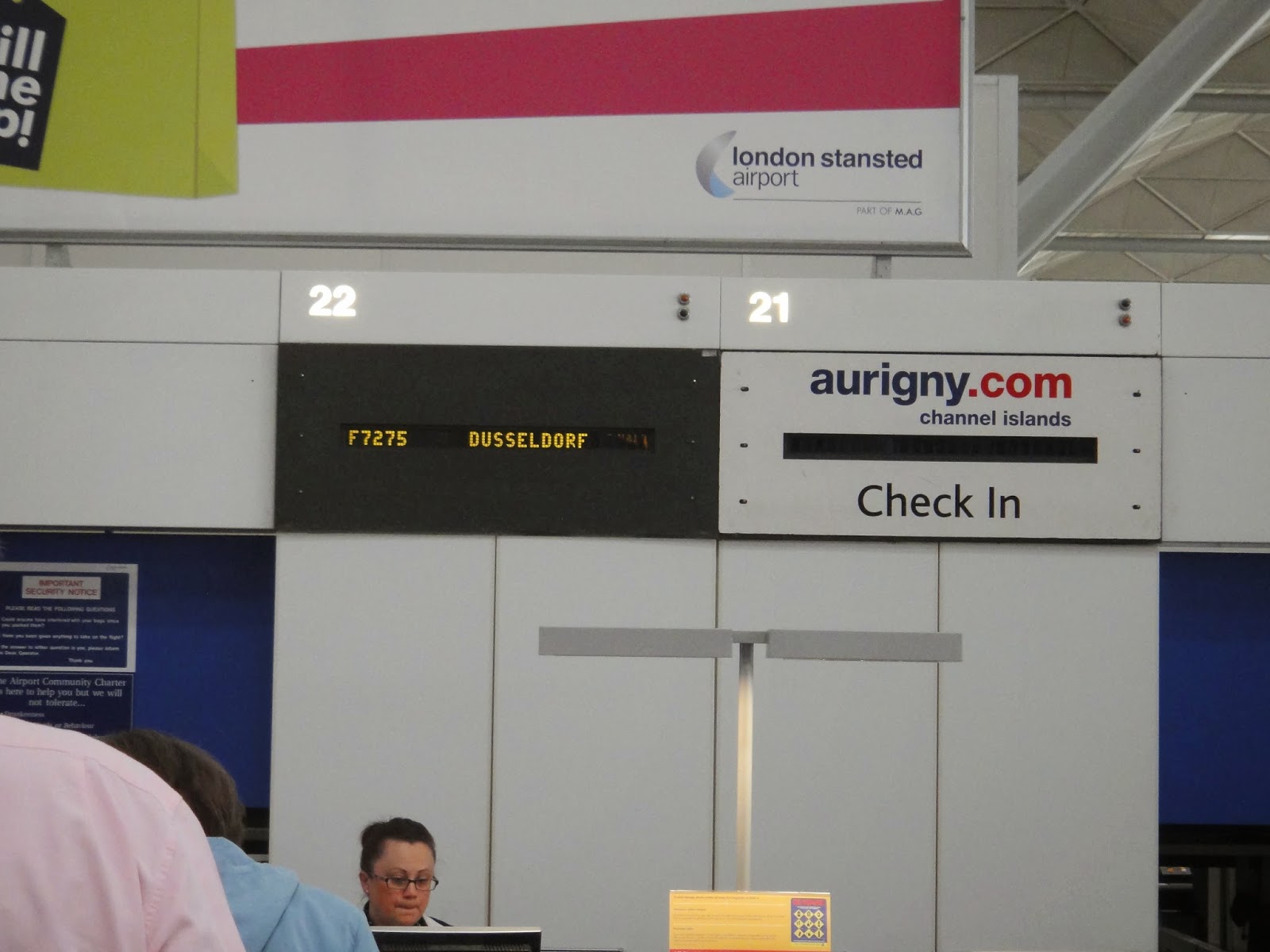 I was handed my boarding pass for only the first sector and advised to collect my next boarding pass for the Air Berling flight whilst in transit in Dusseldorf... at least my bag was checked all the way through. It was a bit disappointing that I  couldn't get both boarding passes as I thought Air Berlin and Etihad Regional should offer a seamless travel experience since they are partners.

Anyway, with my boarding pass in hand I headed for security: 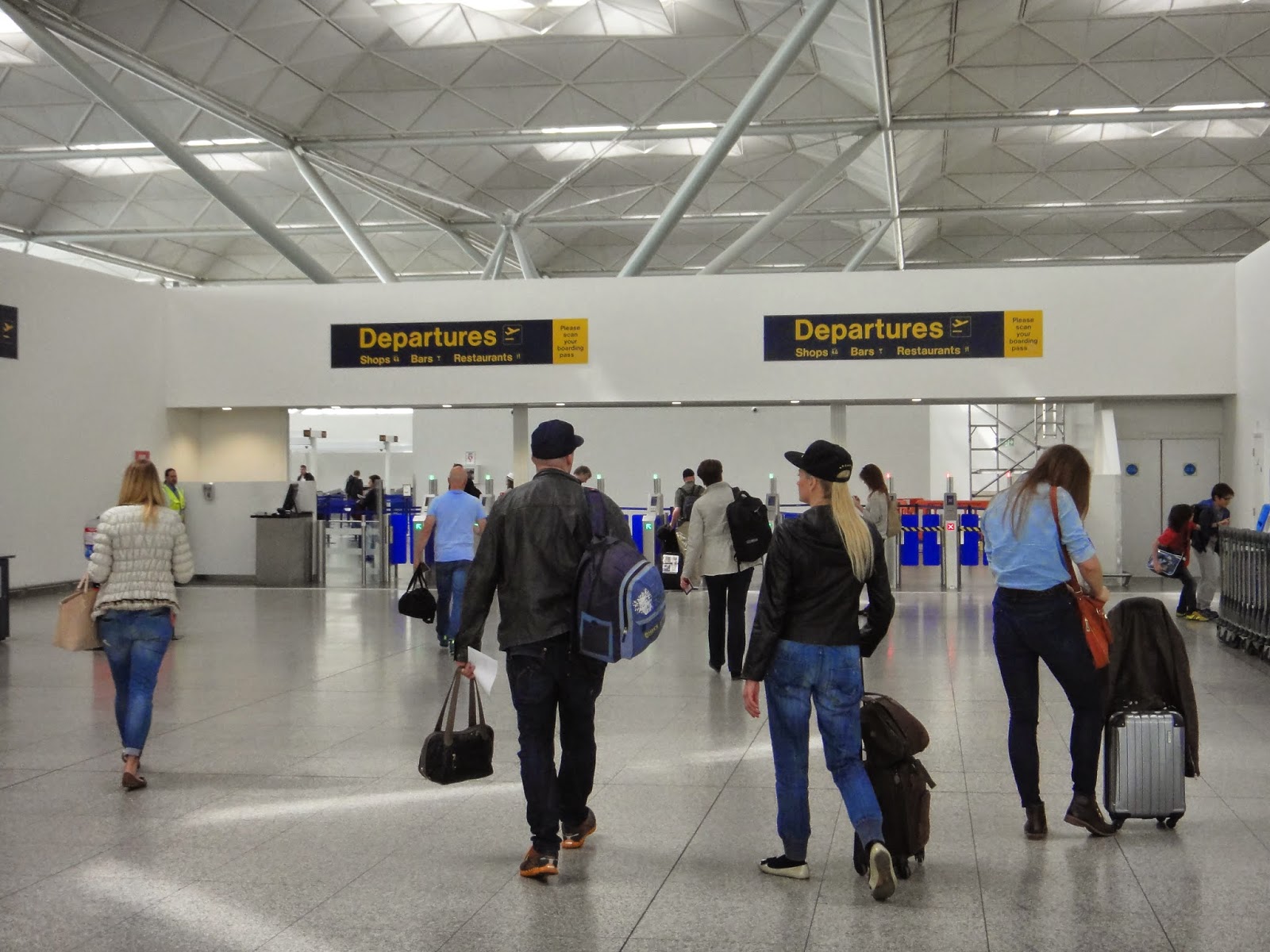 And then into the zoo that is Stansted Airport.  Everyone is held in a central area until gate numbers are announced closer to the departure time. This central area is woefully inadequate for the number of passengers. I struggled to find a seat anywhere to  sit down, so ended up wandering around with my Starbucks coffee. It didn't help that the flight was delayed by at least 40 minutes meaning I had quite a bit of time to spend here.


After a bit of duty free shopping and wandering around in circles for a while, I eventually found out which gate my flight was departing from. I took the train to the concourse where things were much more peaceful. Almost an hour behind schedule the incoming flight from Dusseldorf landed: 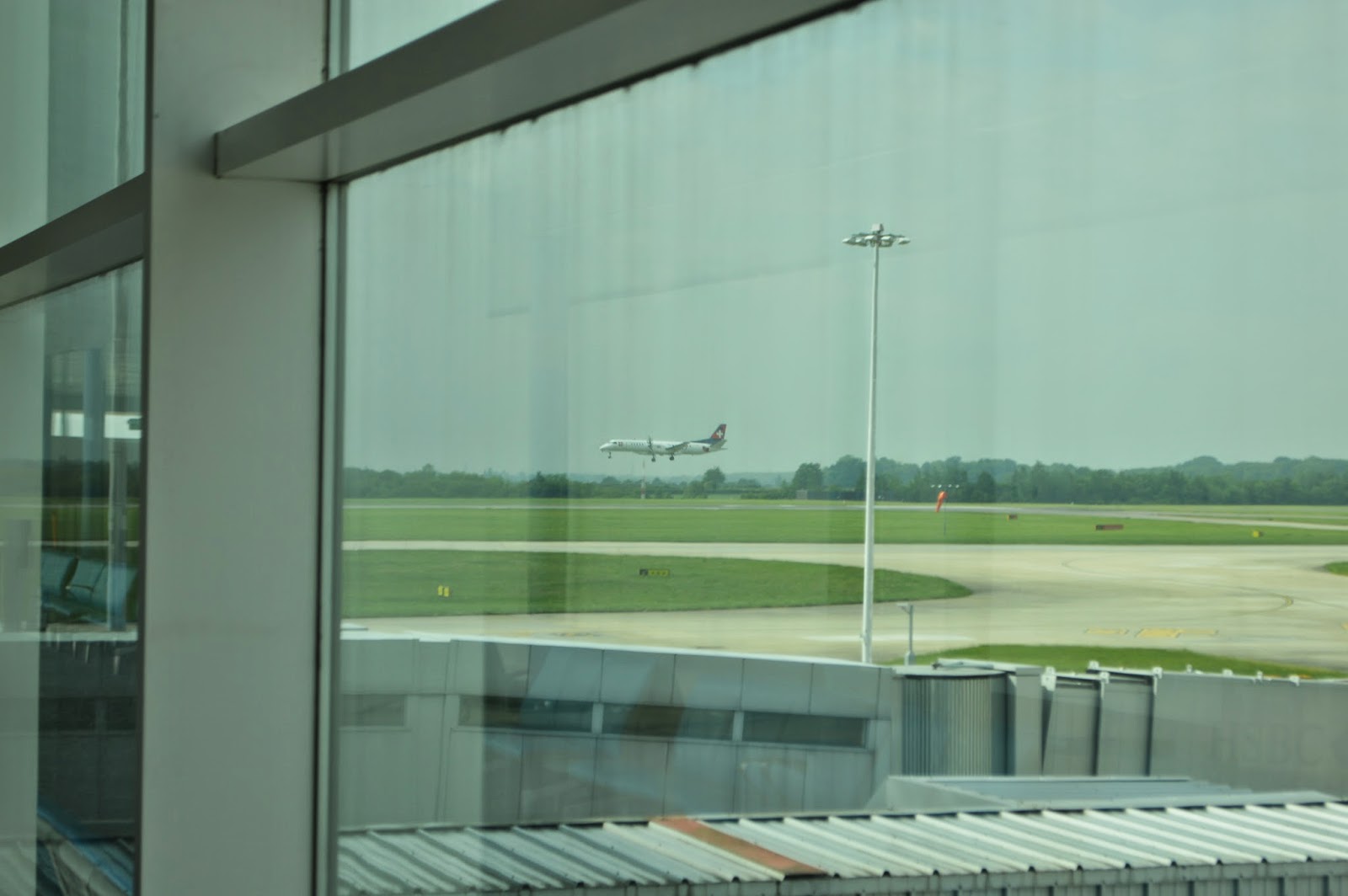 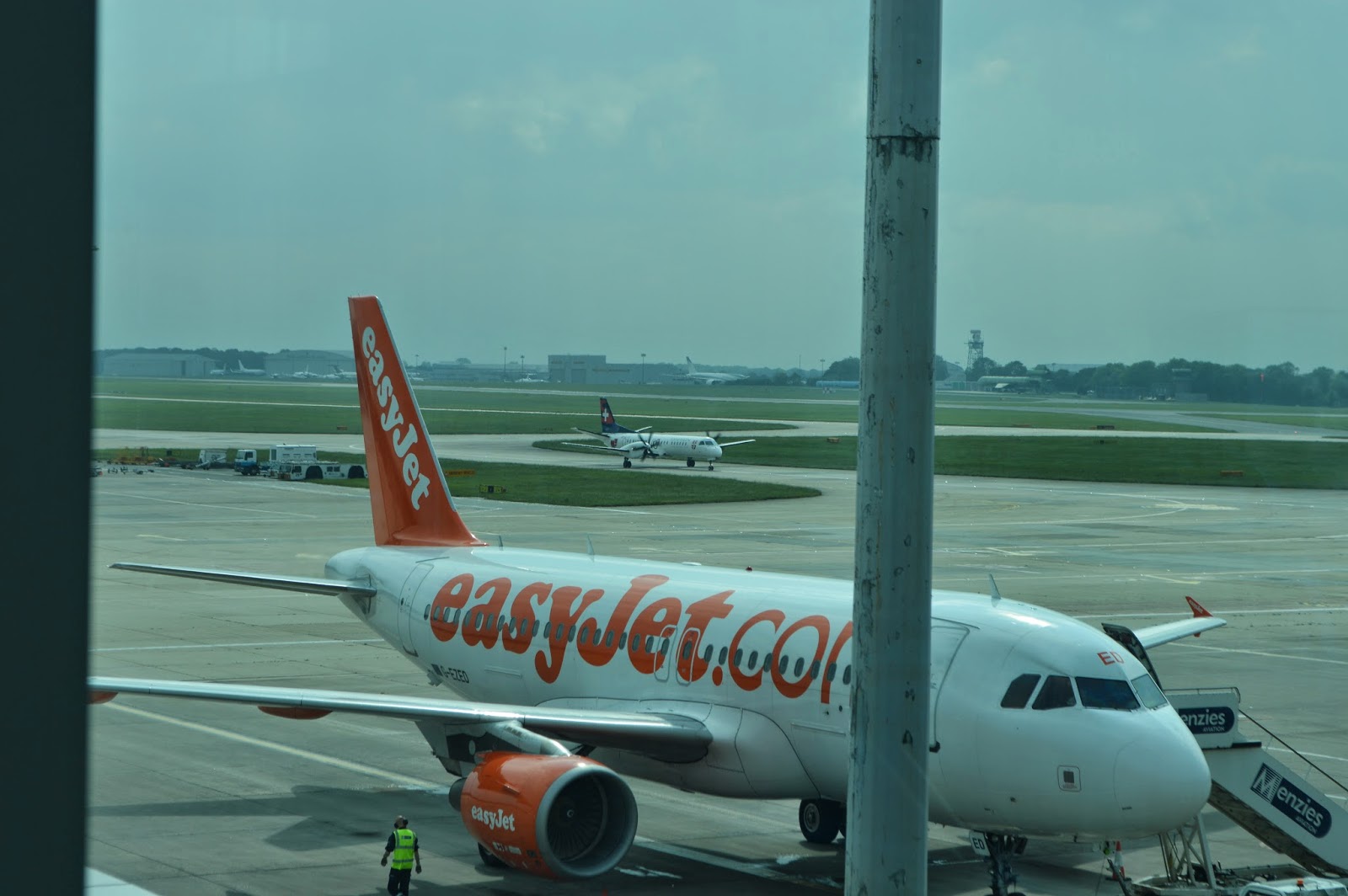 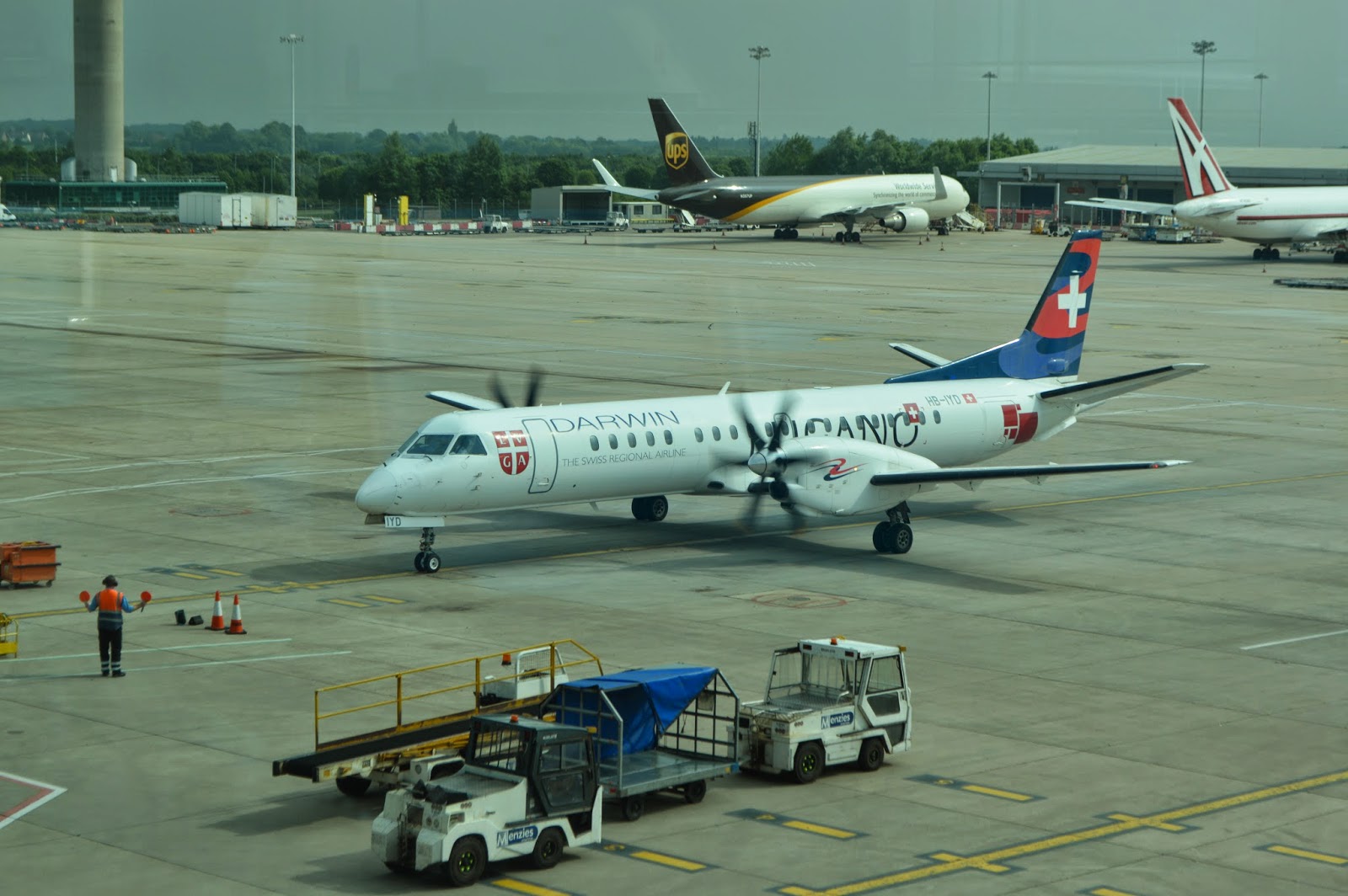 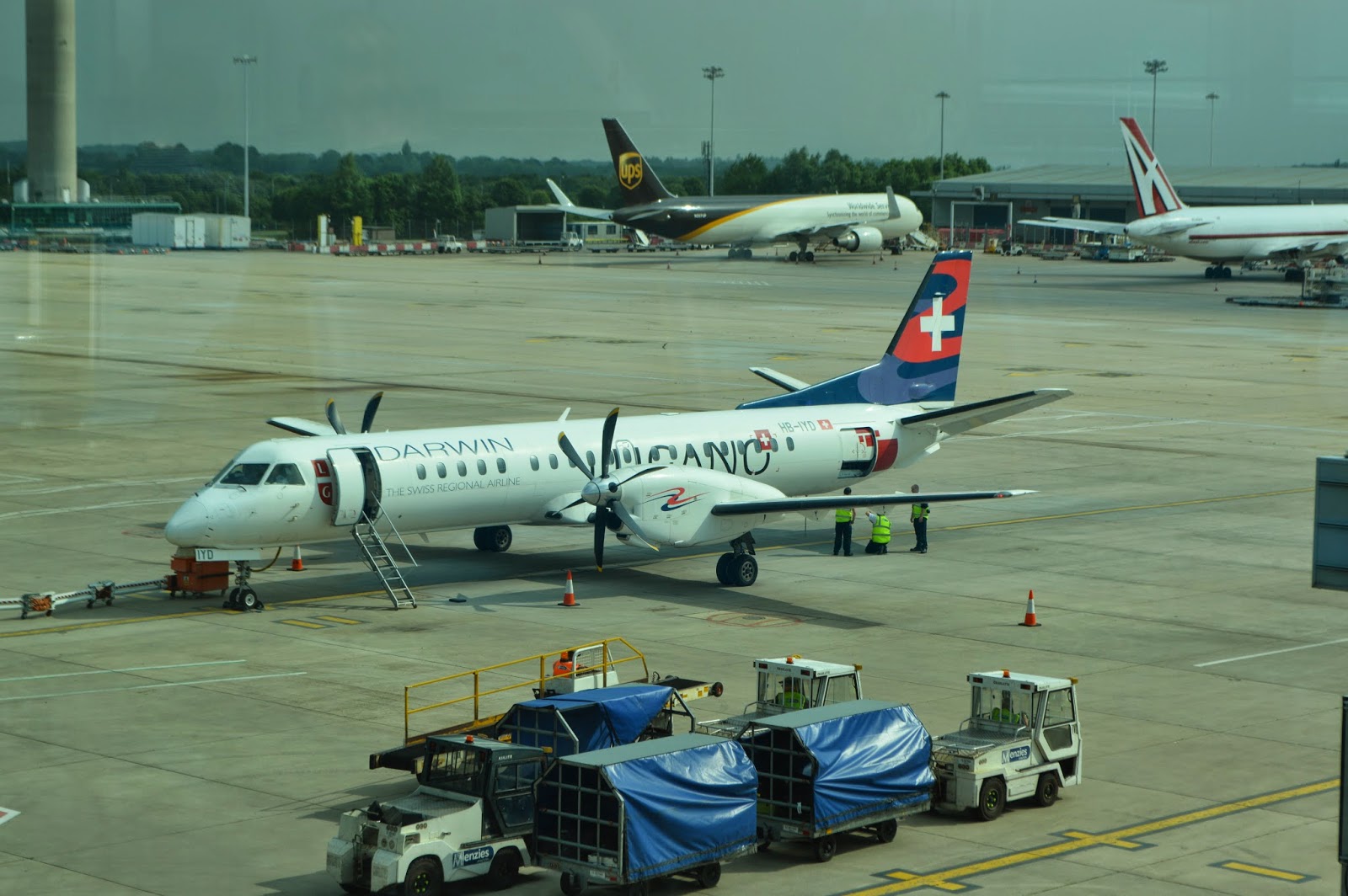 The aircraft operating today's service was HB-IYD, still in Darwin Airlines colours.  The aircraft had its first flight back in 1998, making it about 15.5 years old at the time of my flight. After a fairly quick turnaround boarding was announced and we made our way downstairs and out across the tarmac. My cabin bag was a little large so I dropped it off with the ground crew to stow for me in the cargo hold, I would pick it up again on disembarking the aircraft in Dusseldorf.


I had a seat towards the back on the left. The seating configurations is 1-2, making the single seats great for solo travelers like myself! 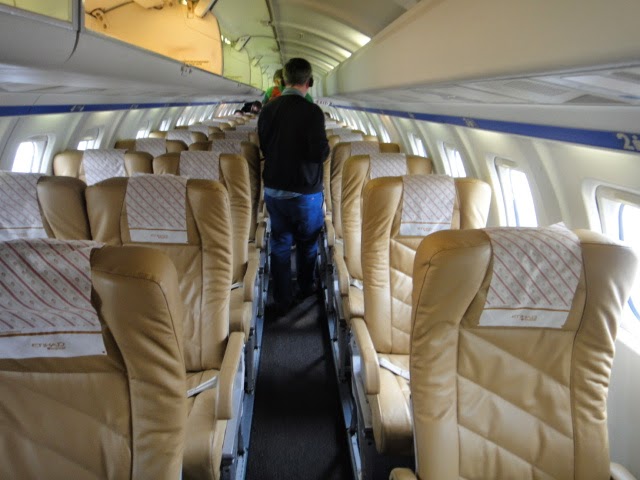 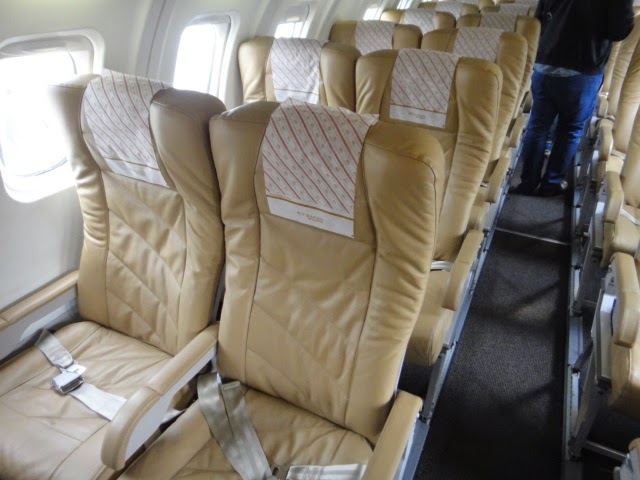 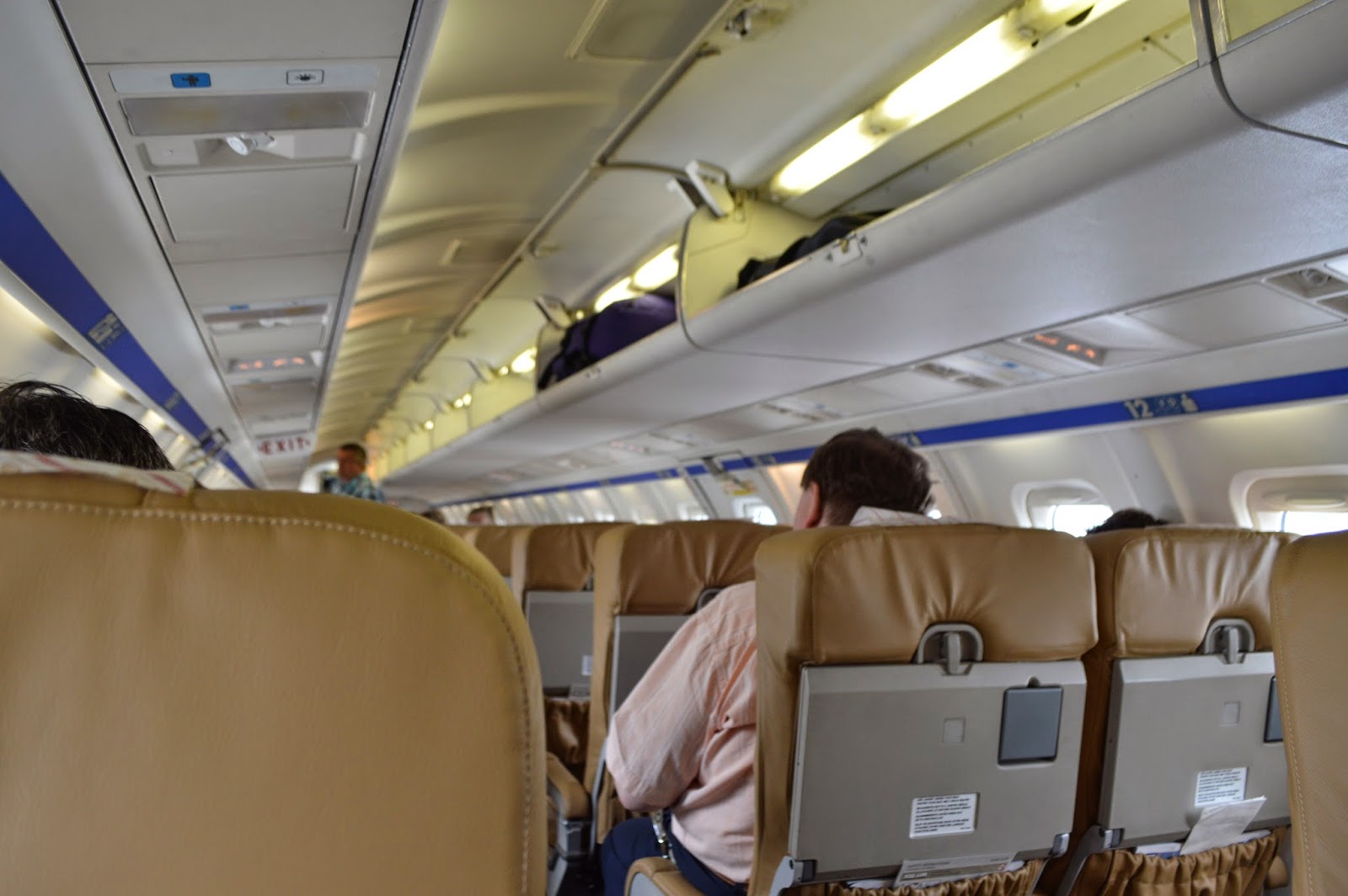 The interior of the aircraft was in great condition and the seats had an attractive brown leather cover. I found the leg room and size of the seat pretty good. We had one German female cabin crew member on this flight to serve all passengers. Boarding was pretty quick and I estimate there was about 40 passengers on board out of 50 available seats. 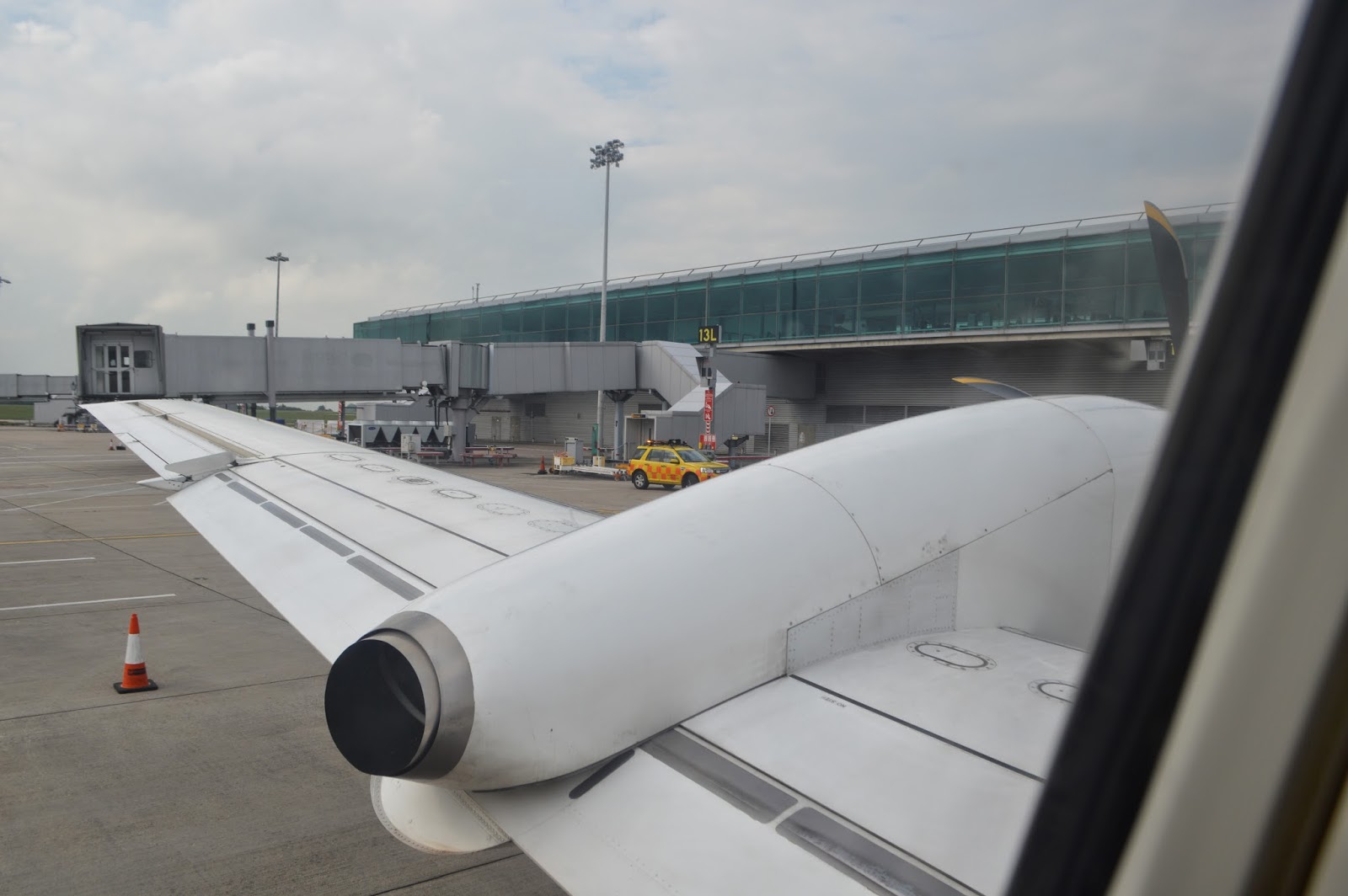 The safety announcement was played as the engines sprung into life. I love the sound of a turboprop aircraft! Flying on the same old Airbus A320's and Boeing 737's does get rather boring after a while so this was an exciting moment for me.

The takeoff was actually very quiet, the sound proofing of the Saab 2000 is superb. Perhaps the fact I was sitting towards the back helped with the noise too. We were soon in the air and climbing through a cloud layer before popping out into the blue skies above. 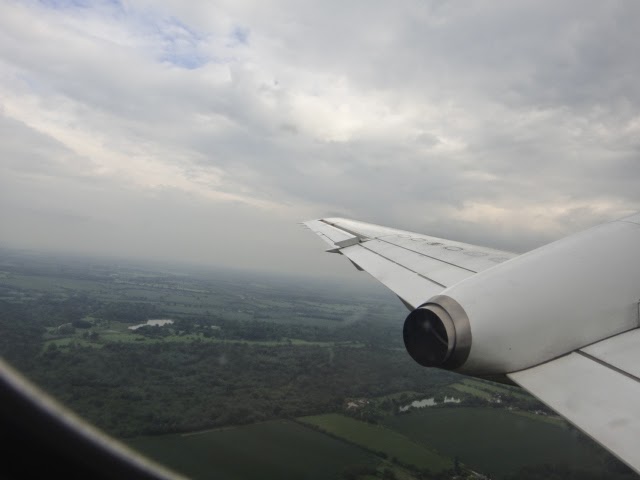 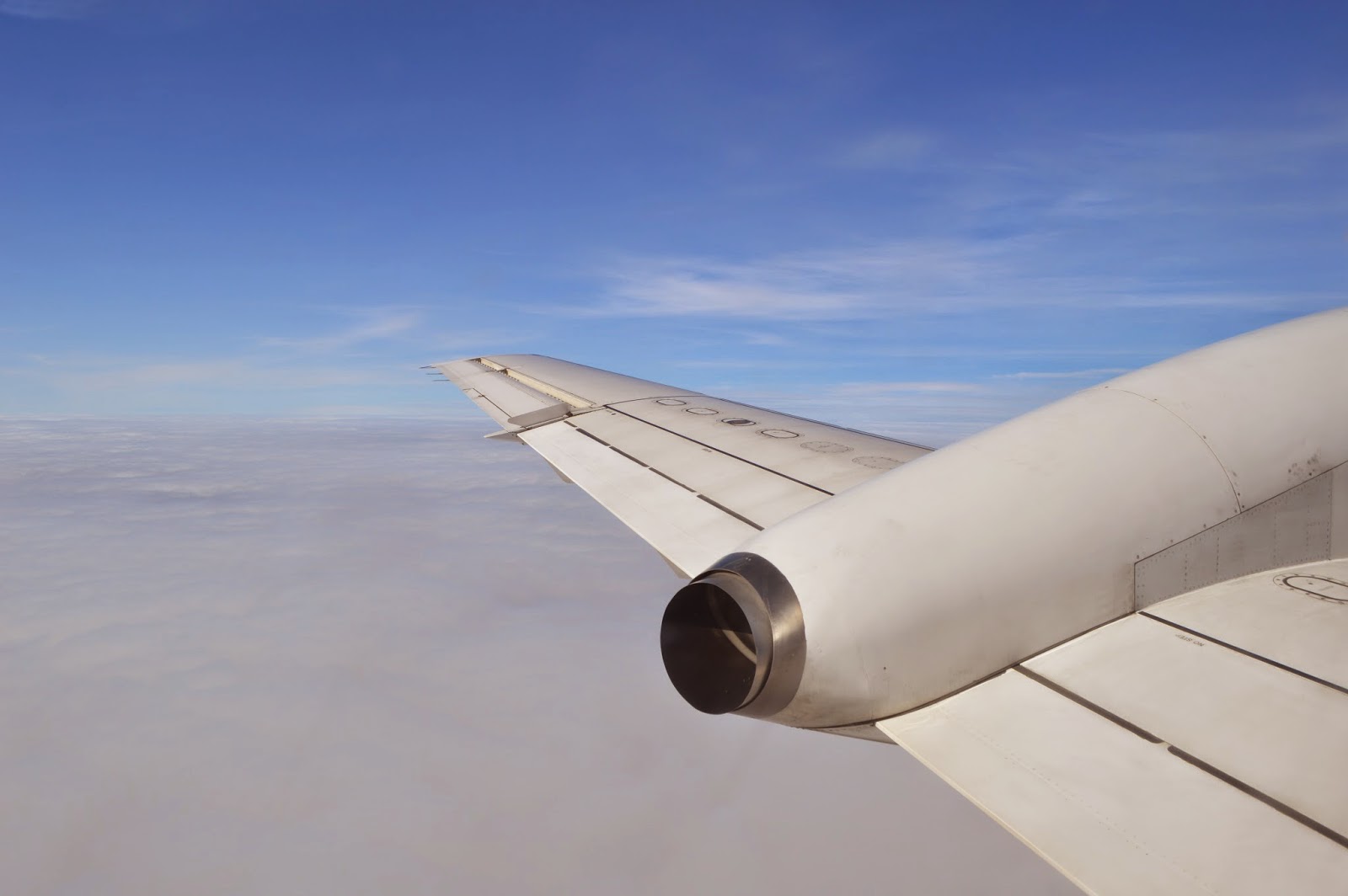 The flight attendant soon appeared in the aisle with a trolley and started offering beverages along with a small bread roll containing ham. It was tiny but quite tasty.

As I was sipping my coke the first officer announced we were almost overhead Rotterdam with 30 minutes of flight time remaining. The weather in Dusseldorf was expected to be clear. With a little over an hours delay we would be landing at 7.30pm. Since it was summer it was still bright daylight outside even at that time.

The approach was smooth but the landing was a shocker, a very hard touchdown and a bounce back in the air before settling back on the runway. I actually felt slightly whiplashed and there was a few gasps from my fellow passengers followed by a bit of laughter.


We arrived at a remote stand and disembarked. My carry on bag was waiting for me at the bottom of the stairs. After about 60 minutes in the air my first (and maybe only!) Saab 2000 experience was over. It was nice to grab a few shots of HB-IYD as I disembarked. 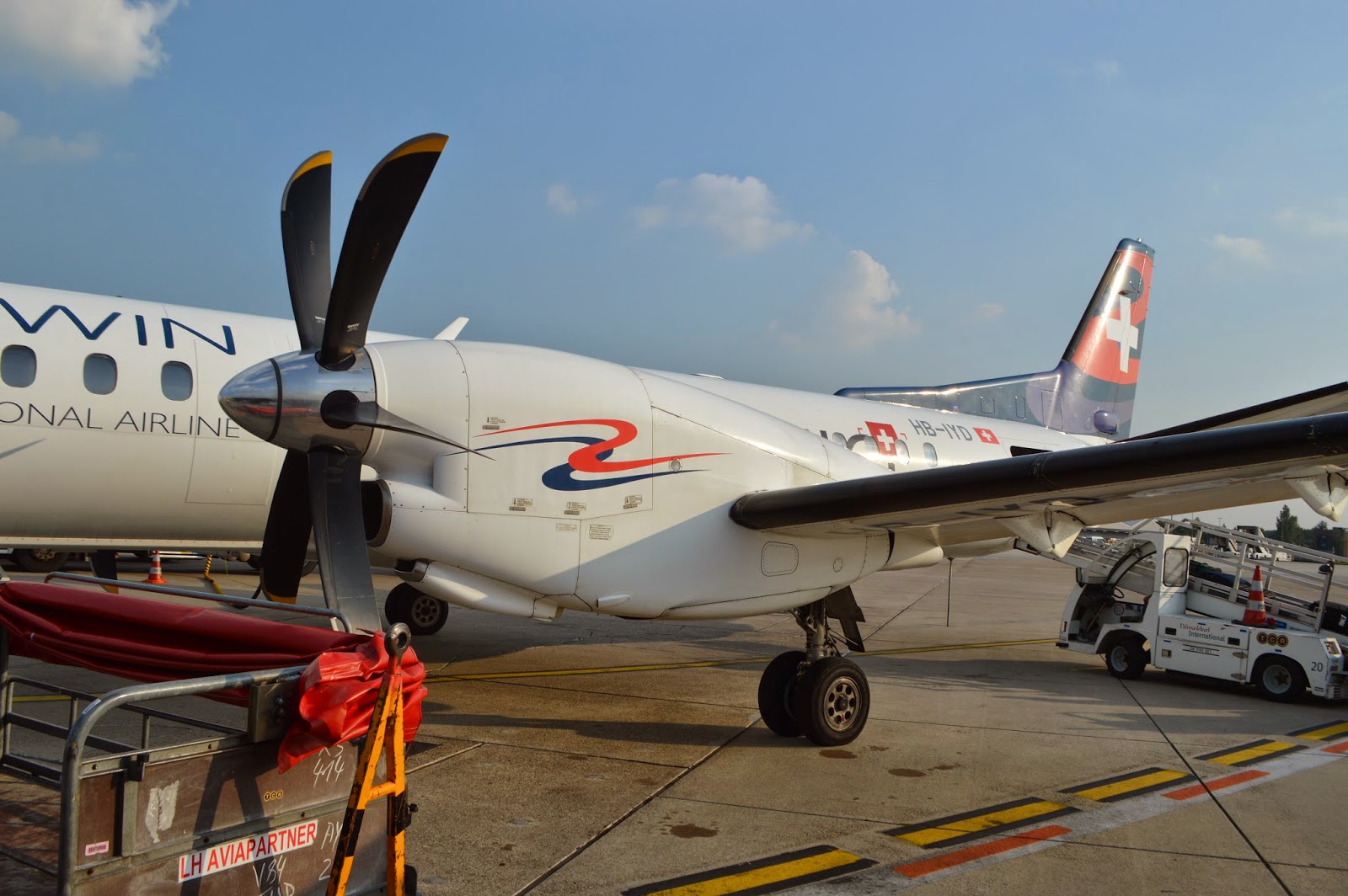 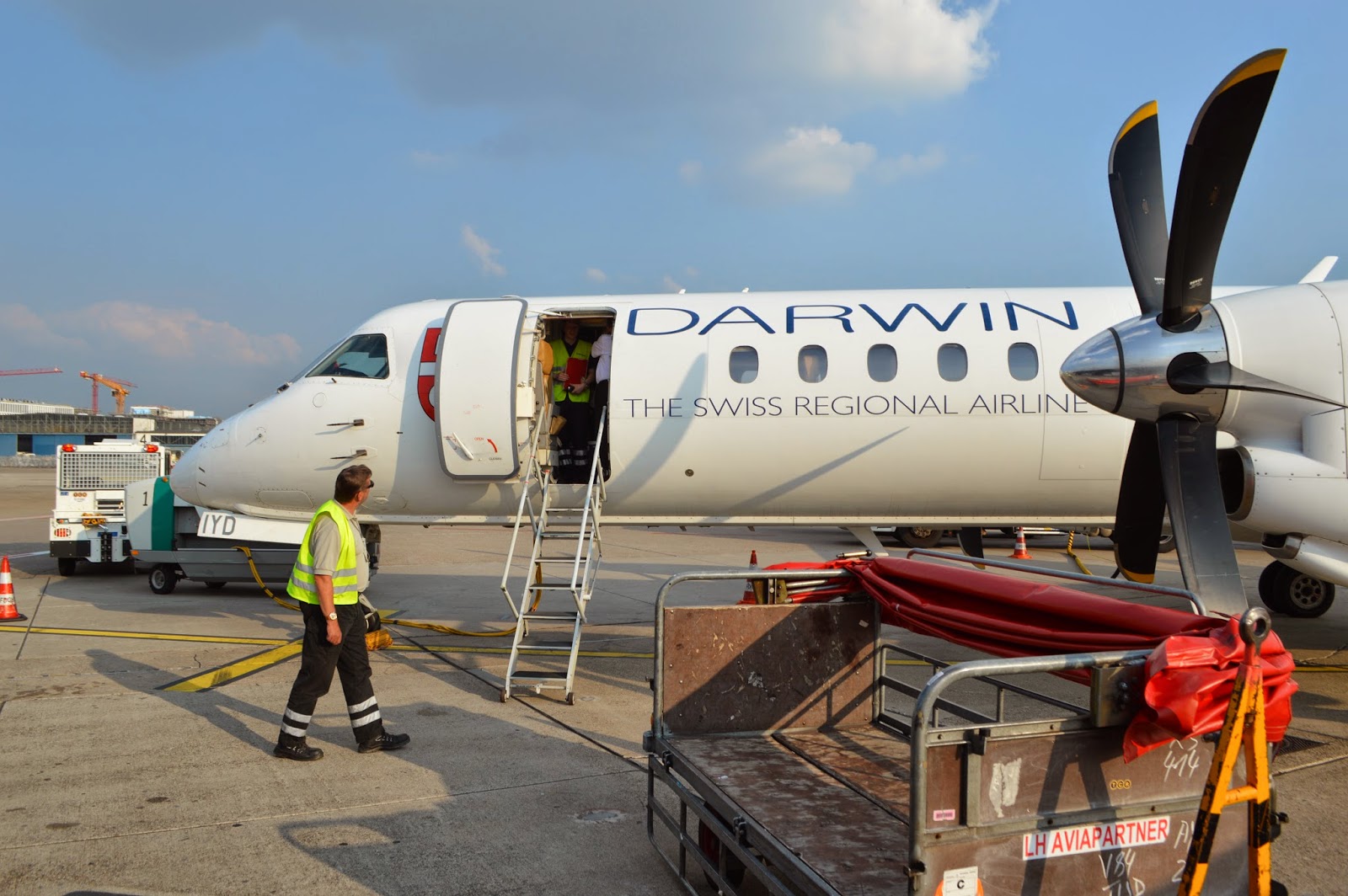 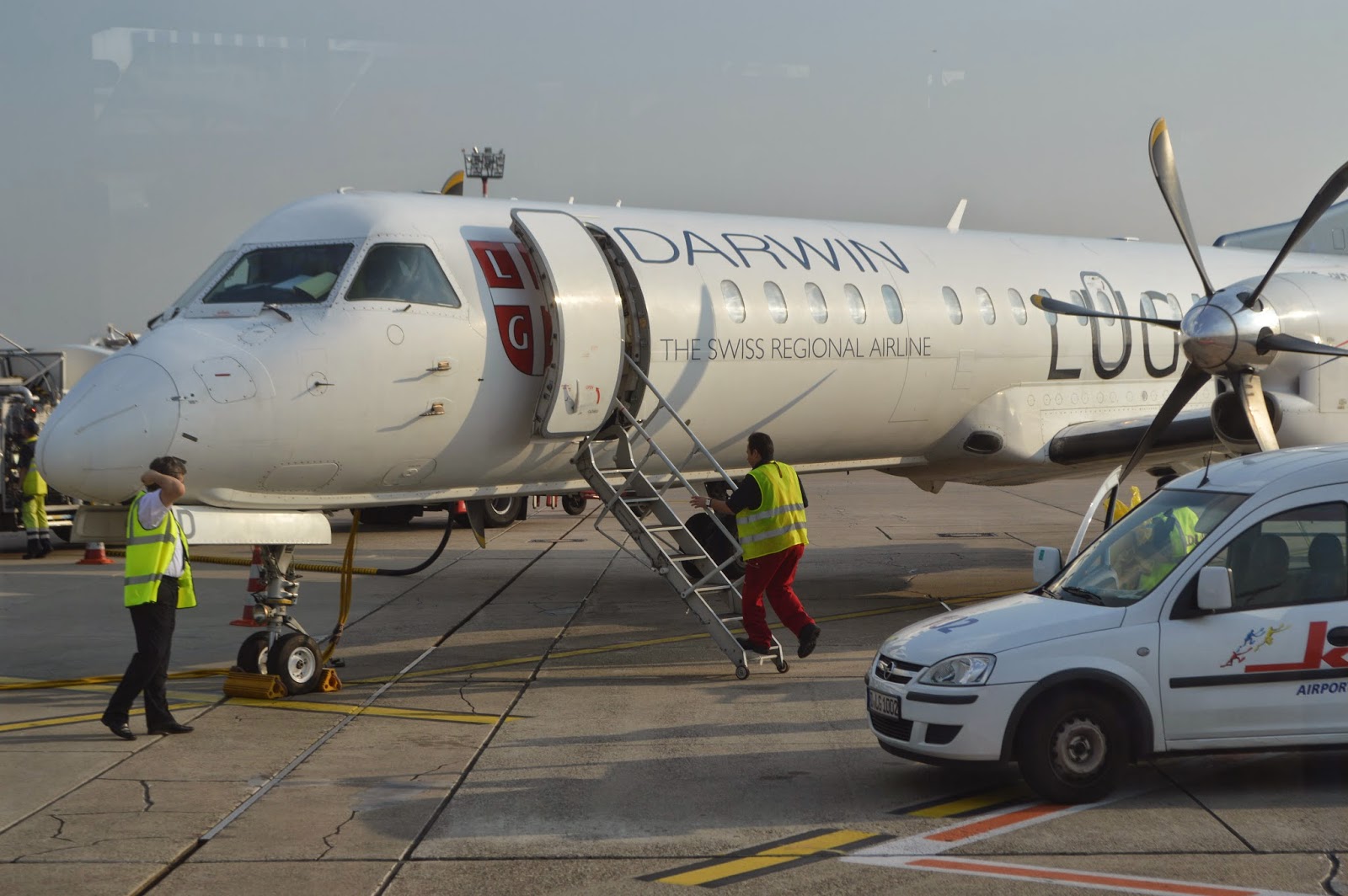 Overall a great flight really, even with the delay. I found the inflight service perfectly decent for a flight of this length and the cabin was very comfortable despite the fact that this is a 15 year old turboprop now out of production. I would certainly fly Etihad Regional again if I got the chance.