- January 06, 2015
Having recently arrived from Sydney I found myself in the wonderful surrounds of the Thai Airways First Class lounge at Bangkok's Survanabhumi airport. One of the ground services available to First Class passengers is the spa facility. On this occasion I decided not to have the full body massage and instead I had a 30 minute foot massage which was very enjoyable. Once that was over I headed back to the lounge for some food and beverage:


There are numerous cooked to order items available for first class passengers, as well as a buffet area with various cold items and desserts too. The staff are great and always on hand to provide drinks and food on demand to your seat. It's definitely still one of the worlds best first class lounges.

It had been a long day so by the time I was collected to be escorted to the plane at about 10.50pm I was very tired and ready for a nap. Unfortunately there is no buggy to the plane for departures in A concourse so it was a rather long walk with the Thai first class lounge staff member to gate A1.

Here's the details of the flight:


Unfortunately the flight tonight was being operated by a Boeing 747 in the older configuration with pod style first class seats instead of the new suites. Just like the ones I had flown in on from Sydney. Looks like I was unlucky on this occasion. Never mind - the seats are still very comfortable and despite the 19 year age of this particular 747, it was still in very good condition.

This is the red eye flight to Tokyo and was packed full of Japanese men in First Class. I was the only non-Japanese passenger and all seats were occupied on this flight. The load in business and economy was also completely full! Thai certainly seem to do very well on the Japanese routes.

The crew welcomed me on board and delivered a fresh glass of Dom Perignon along with a pair of pyjamas. Also at the seat was the famous and in demand Rimowa hard case amenity kit. Menu's were handed out and the crew confirmed I would be served my special pre-ordered meal for breakfast in the morning. After takeoff a light supper would be served.


Here is the menu for this overnight sector: 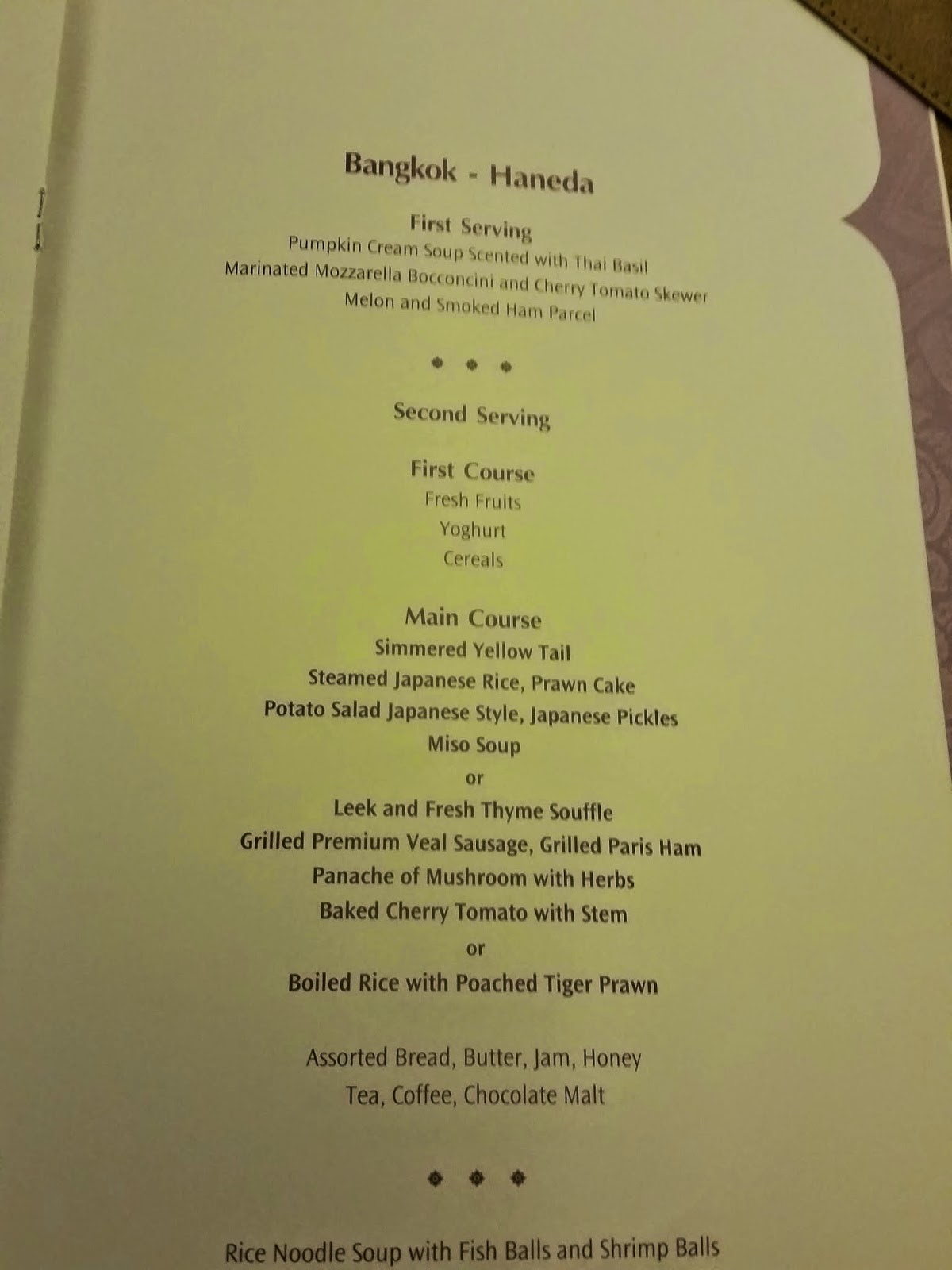 About 10 minutes behind schedule, at 11.25pm we pushed back from the gate and made the long taxi around to runway 01L for our departure into the hot and humid Bangkok night. There was a fair bit of low cloud on departure so there was not much of a view. Fortunately though the weather smoothed out pretty quickly and the light meal was soon being served,.

First up was the marinated mozzarella bocconcini and cherry tomato skewer, served with a melon and smoked ham parcel. Both came in small  bowls on a plate. The taste was ok, nothing special. The Dom Perignon was free flowing of course. It was interesting to note that the older style serving ware was still in use on the intra-asia regional first  class. Although as you can see from the (rather blurry) photo below, the bowls are new but the plate is old: 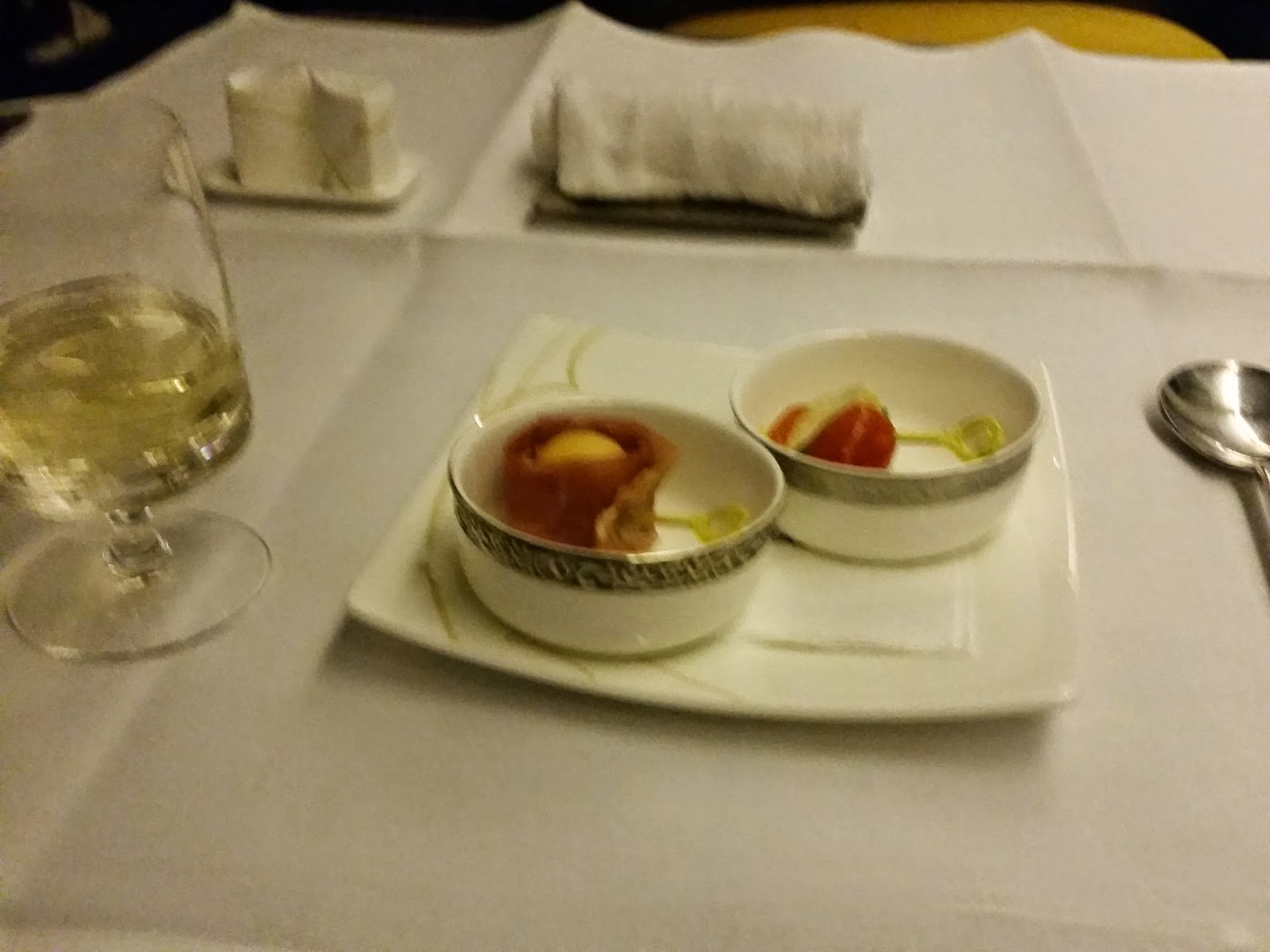 A few moments later the pumpkin soup was served: 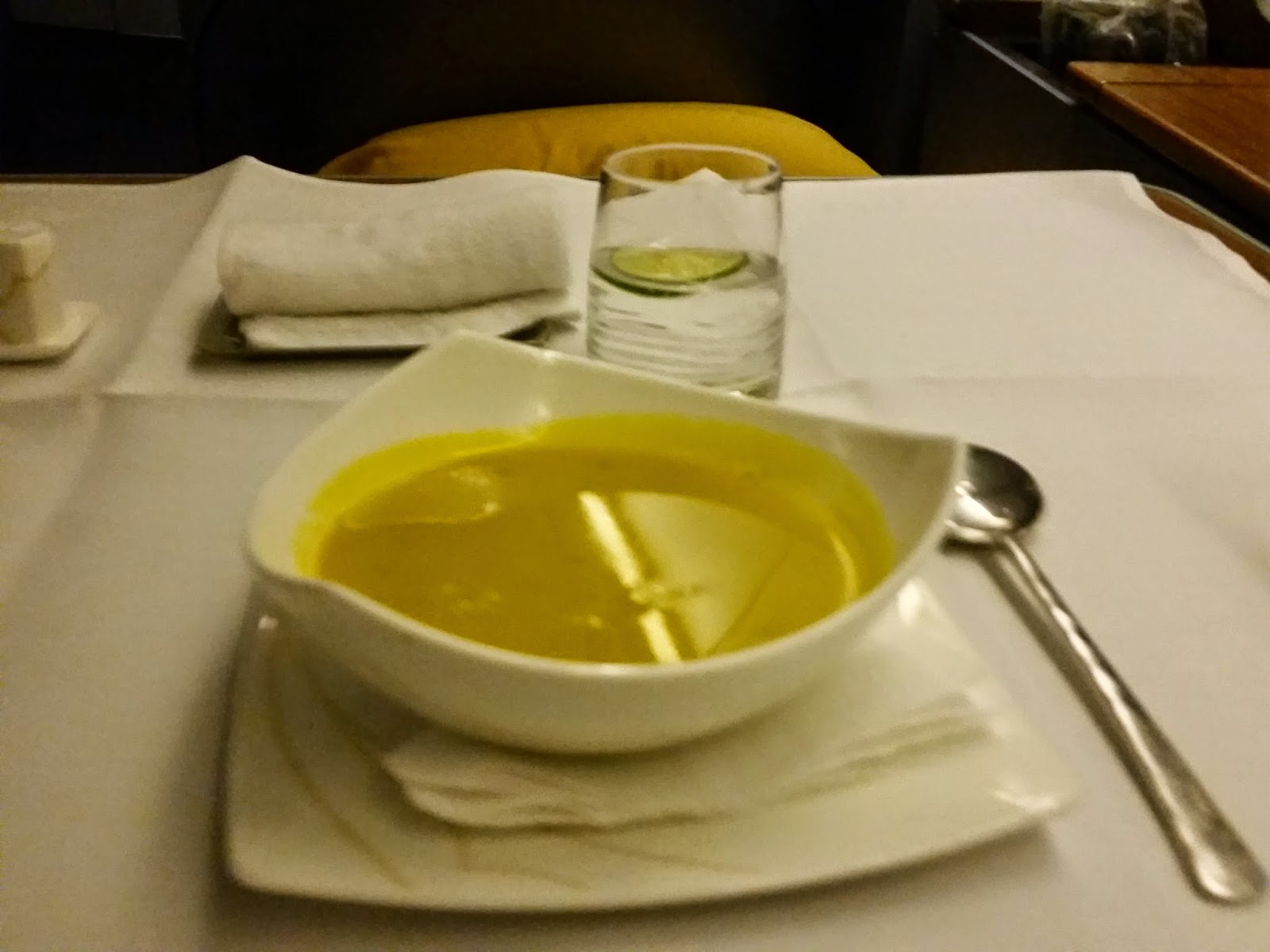 I finished the food pretty quickly and within about 45 minutes of take off it was time for bed. I went to the bathroom to put on my pyjamas whilst the crew made up the bed. The seat was reclined and a mattress put over the top along with the duvet and pillow. It's quite cosy but not particularly  private.

The cabin lights were turned off and I slept on and off until it was time for breakfast a little under 3 hours later. Unfortunately I had no more than about 2 hours 30 minutes of sleep and I was in need of  much, much more!

Never mind, it's important to enjoy the full meal service, and I was the only passenger who had selected from the special first class pre-order online menu. I had chosen one of the Thai set meals, and it became my breakfast. I think it was much better than the offerings on the menu that the rest of the passengers consumed. 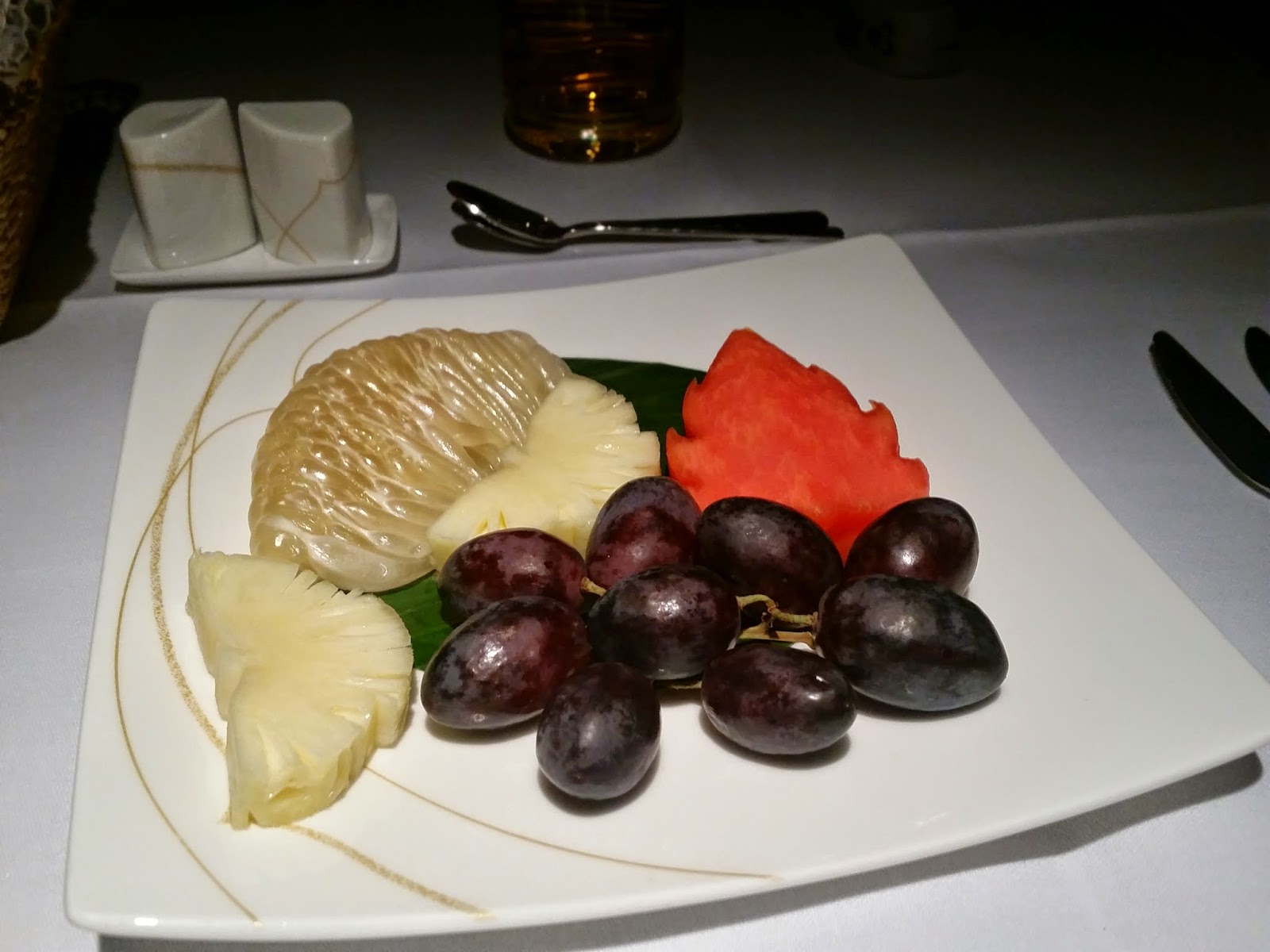 Which came with  traditional breakfast pastries: 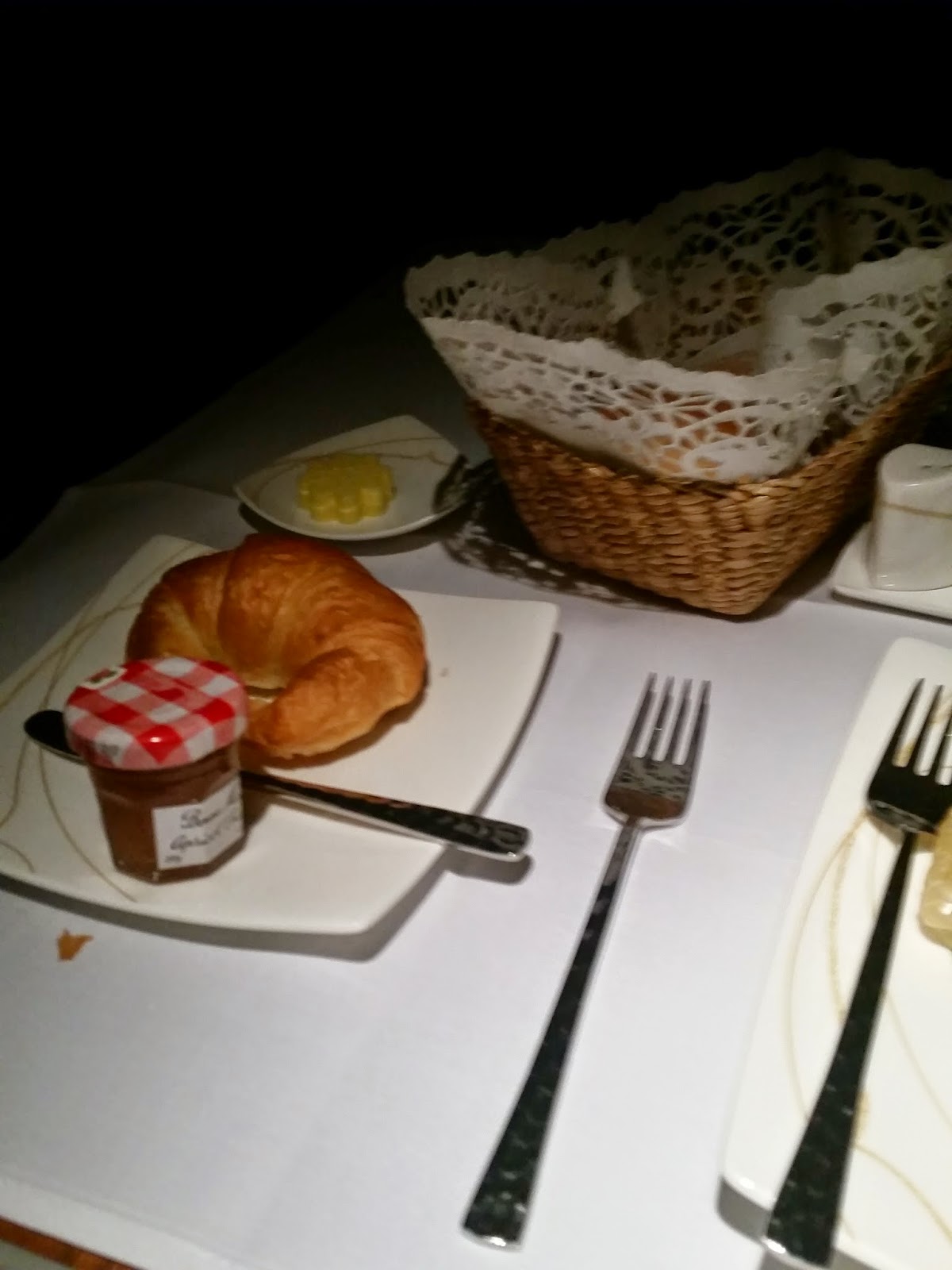 Both the fruits and the pastry items were quite tasty. But the main course was very enjoyable indeed. I had a prawn Tom Kha soup, and a big plate containing a couple of different pork dishes. Pork with lemon grass and a pork stir fry with basil and chilli. Very tasty! 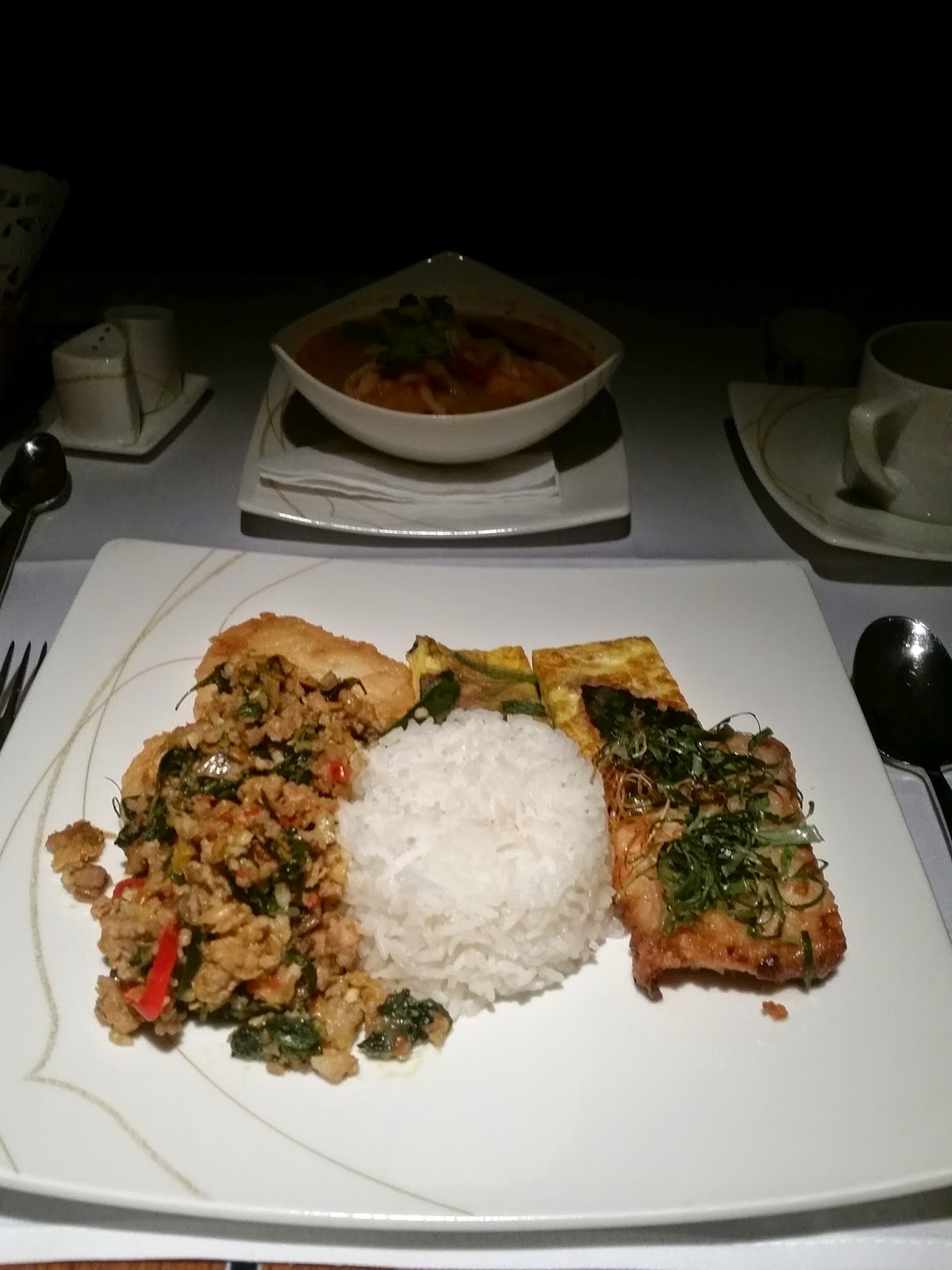 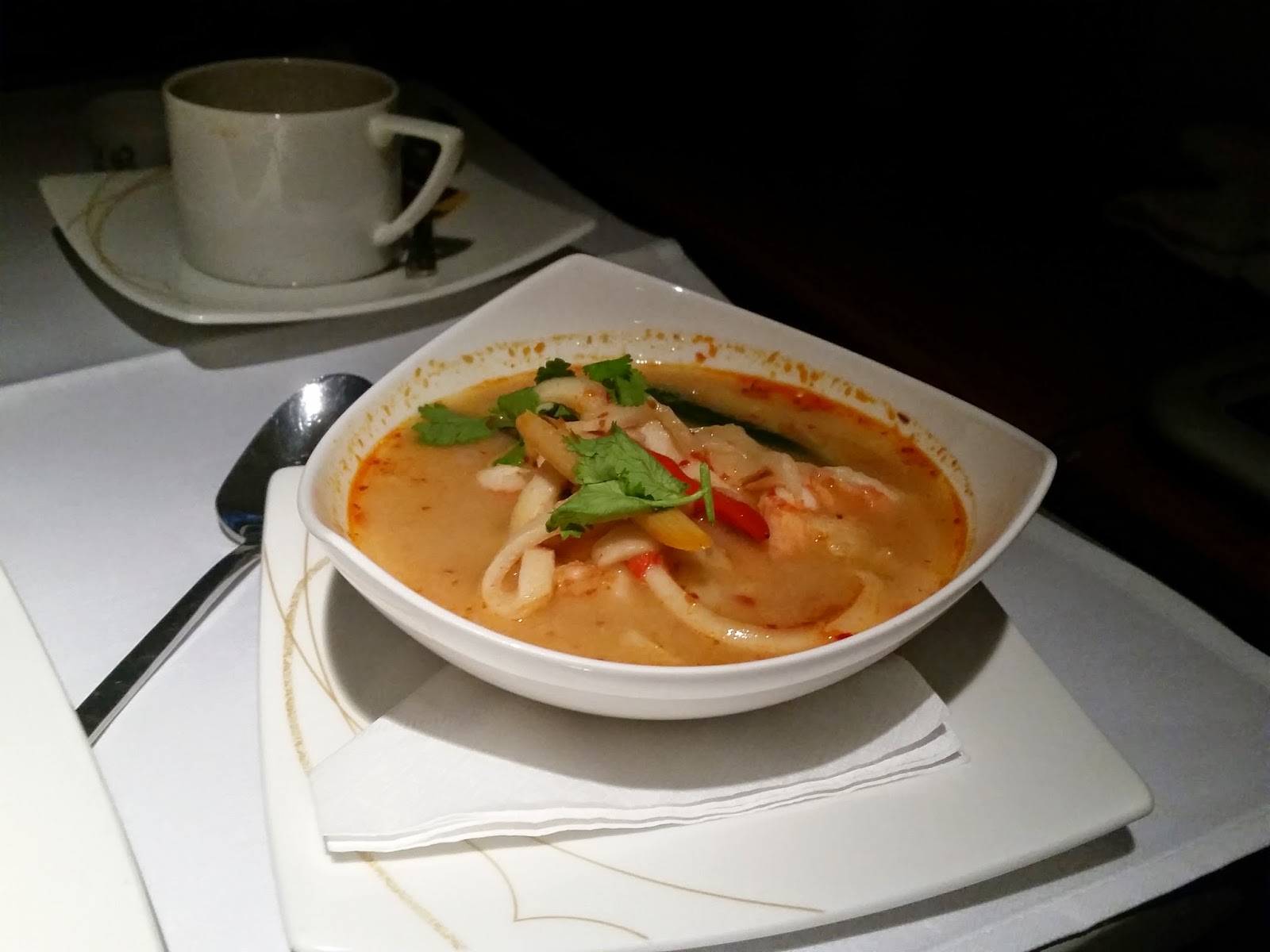 Quite a few of the other passengers were giving me envious looks, wondering why I got  such a big and interesting breakfast. I definitely recommend ordering this on these red-eye flights. By the time breakfast was over we were almost ready for descent. It was beautiful and smooth flying although there  was quite a lot of cloud below: 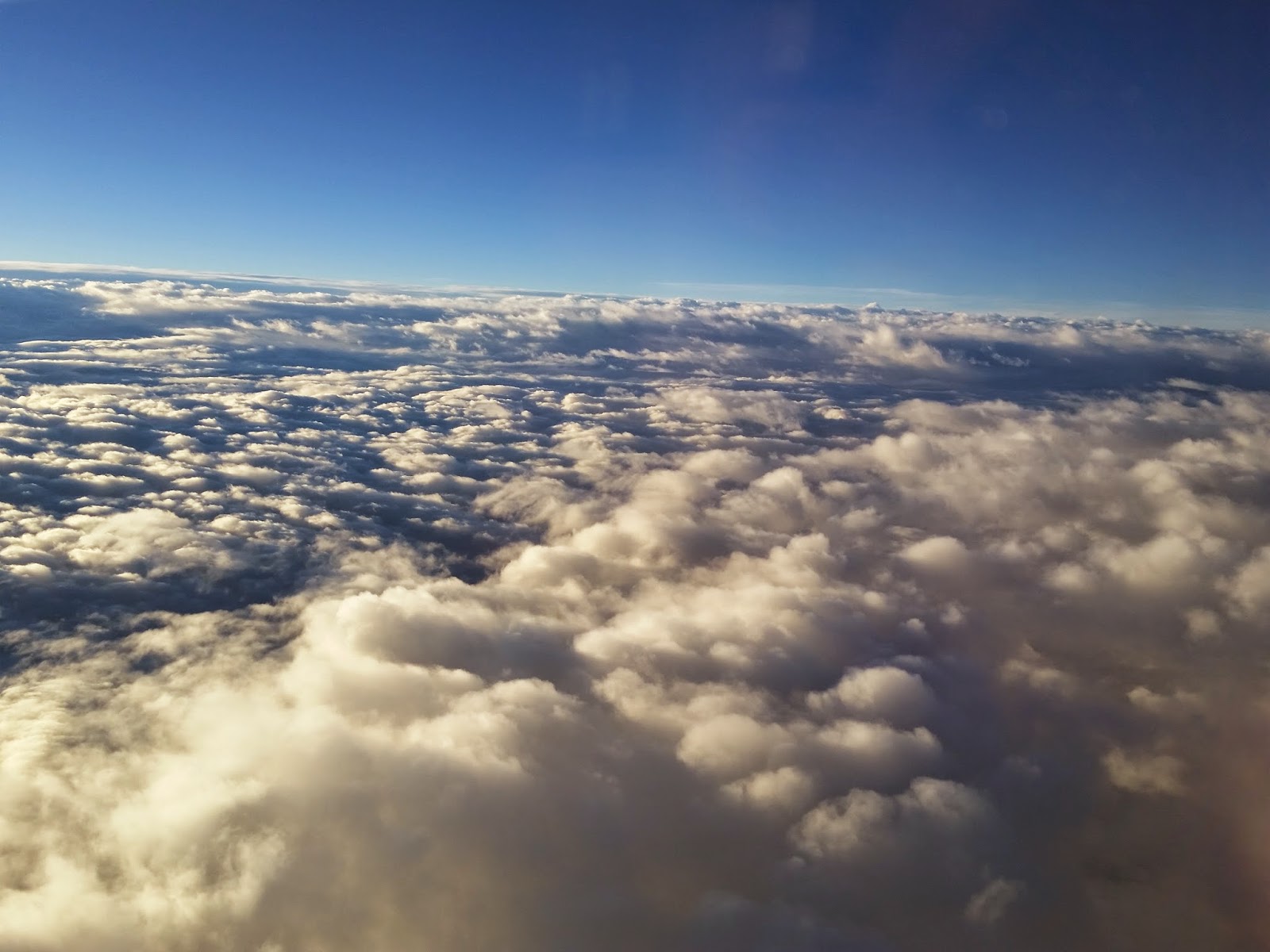 Service on the flight was generally ok but nothing special, certainly not as friendly as the crew on the previous flight from Sydney. Though of  course it was an overnight redeye service which is mostly focused on getting a good night sleep rather than having a long an enjoyable meal.

The captain gave his PA and a short time later we were on descent to a cloudy Tokyo. 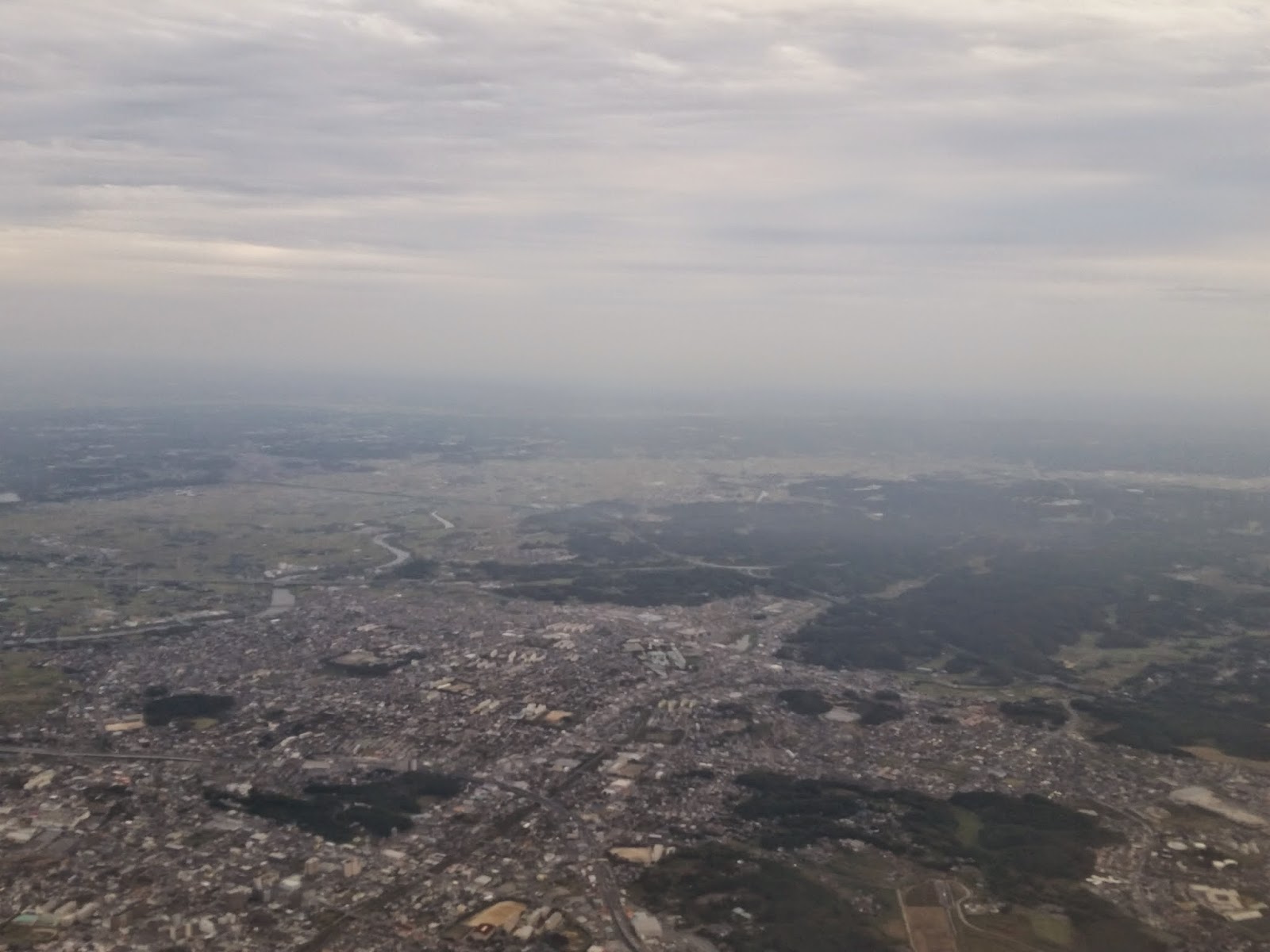 We touched down at Haneda 5 hours and 6 minutes after lifting off from Bangkok. It was another 'smooth as silk'  landing and we made our way to the International terminal, parking next to a Singapore Airlines B777. 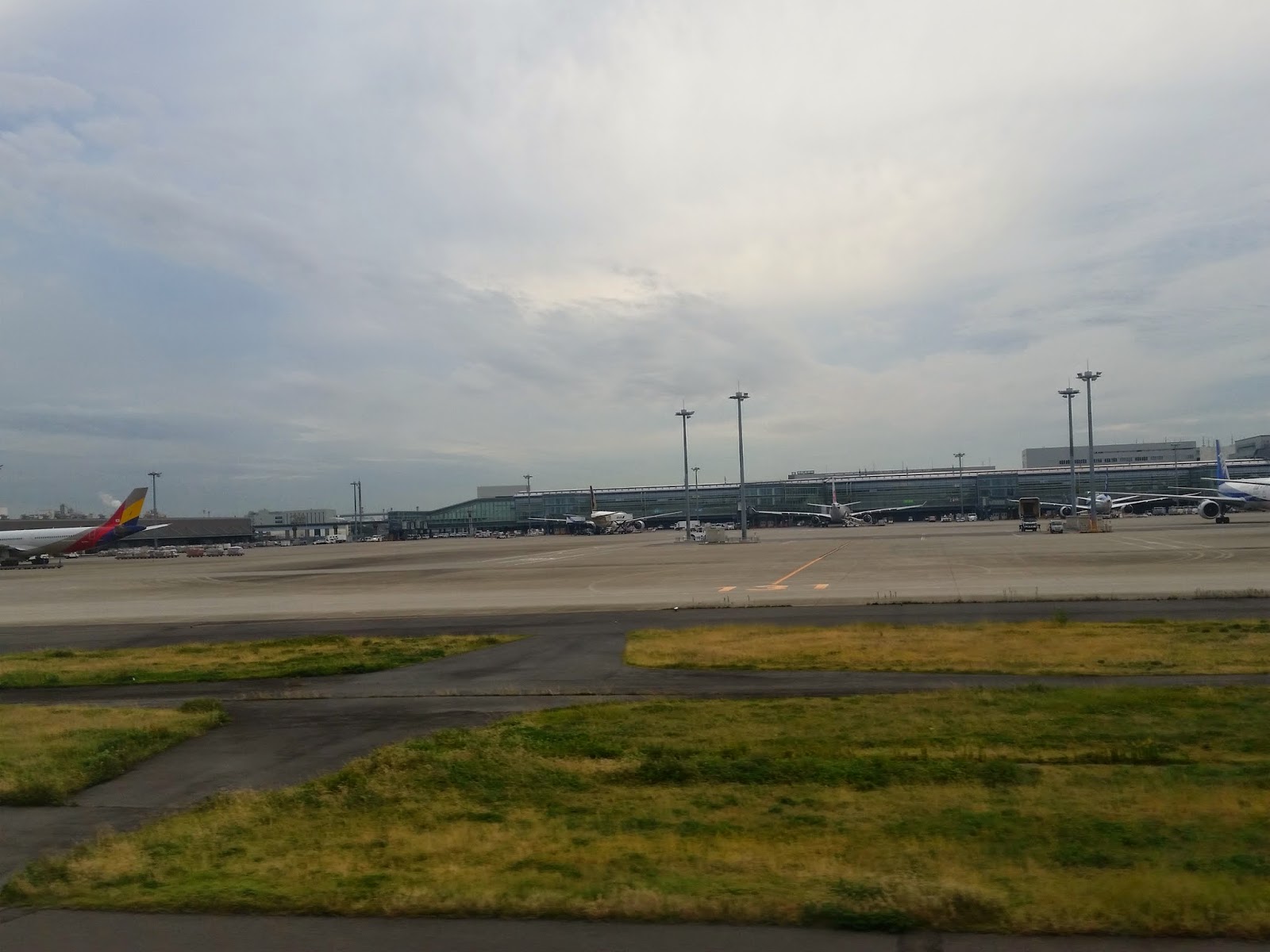 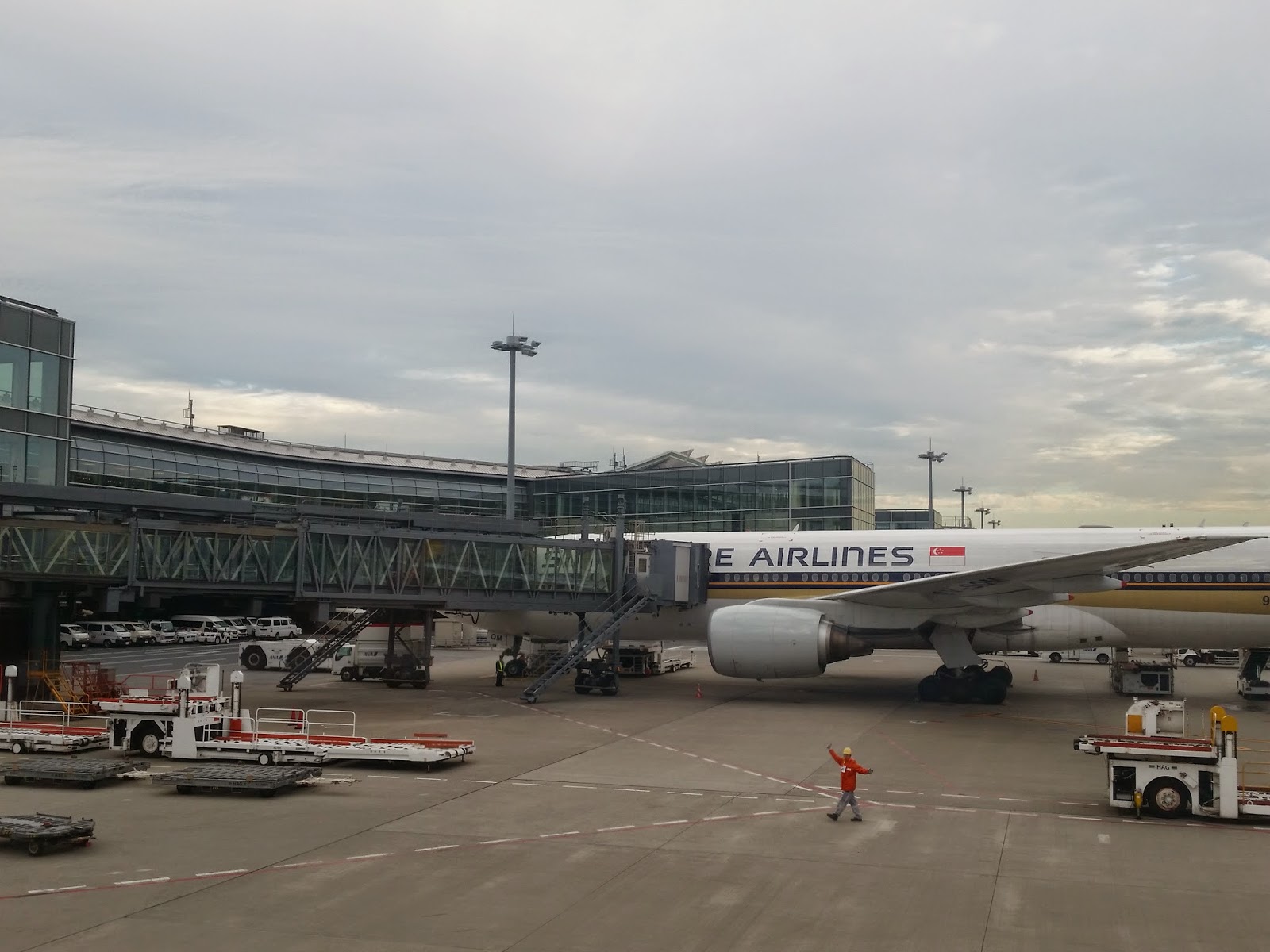 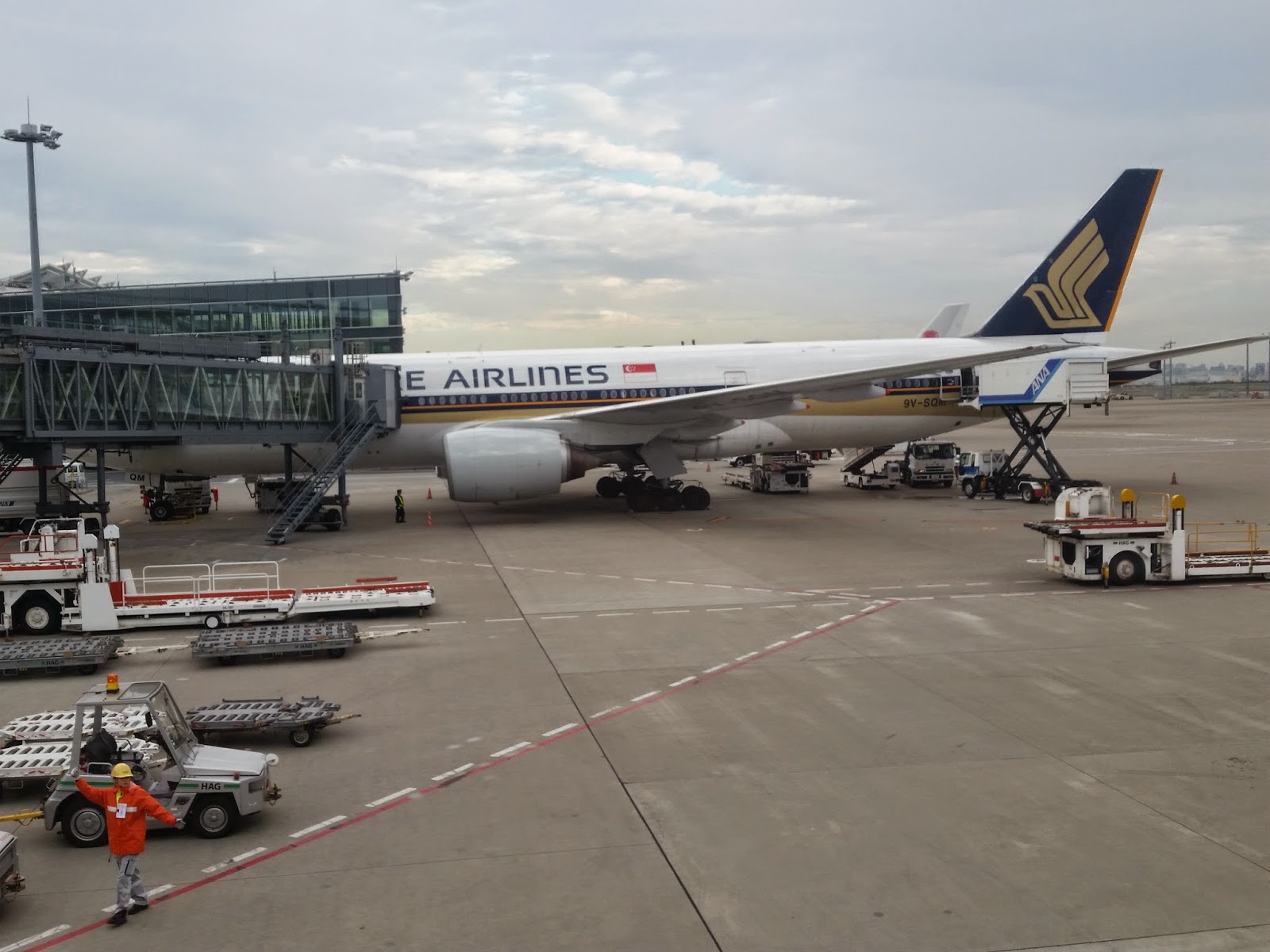 We were soon parked at the jetway and the cabin crew had blocked off access to the front door from the business class cabin, ensuring First Class passengers disembarked first. With a thankyou and a wave I headed off into the terminal....


It was a decent flight, service was acceptable but not exceptional and I managed a bit of sleep. The highlight was probably the thai food, very nice indeed. I am hoping the next time I fly first on a Thai jumbo it will be in one of the 6 newly configured suites aircraft.

The next part of this series of reports will be on a Japan Airlines Boeing 767 from Haneda to Osaka Itami in 'class J'. Stay tuned.
Boeing 747 First Class Thai Airways trip report