- May 13, 2015
I recently flew to Bali and back and took advantage of a super cheap airfare Jetstar offered last year when Indonesia Air Asia X announced plans to fly direct to Melbourne from Bali. Here is a quick report of my experience on the flight.

For Melbourne to Bali (Denpasar) I was booked on JQ35, departs at 5.15pm, arriving Denpasar 6 hours later at 9.15pm. The flight today was operated by VH-VKB, it was 18 months old at the time of the flight. Check-in was available at the automated kiosks with automated 'do it yourself' baggage tags and baggage check-in. With that done I headed off to the Qantas first class lounge for a while, and then to the gate at about 4.45pm where boarding was just getting under way.

I had selected a window seat towards the back hoping for a vacant middle seat. Unfortunately thing's didn't go to plan when a woman with a baby was occupying the middle seat next to me. However as the flight was not full the crew found her somewhere more comfortable to sit  which gave me a lot more room, thank goodness.


Jetstar, like many carriers, has elected to fit the B787 in a 9 abreast configuration in economy class. This means the seats are more narrow than some people may be used to. Fortunately I didn't have to test my patience since I had loads of room with the middle seat free.

The Captain advised pushback was delayed as we awaited connecting passengers from Auckland. Interestingly the Captain of today's flight was none other than the chief pilot of Jetstar, Georgina Sutton. Formerly a Qantas 767 fleet captain she has recently taken up the job at Jetstar after the 767 fleet was retired.

With the sun setting we finally made our departure about 40 minutes behind schedule. We took off to the south making some right hand turns and setting course for Bali. The cabin was extremely quiet and the ride very smooth, I do love the 787! 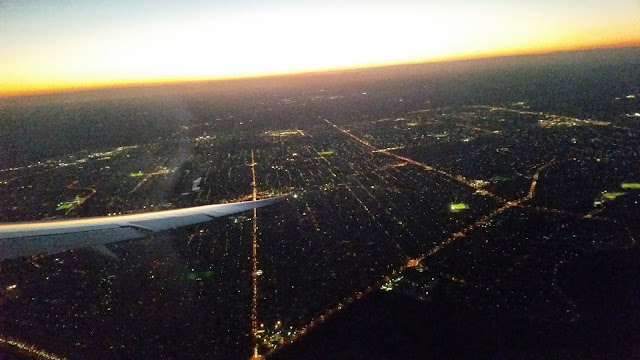 As I had purchased the 'Plus' pack for this flight I had a meal pre-booked. I had chosen the beef with potatoes and it came on a tray with a small water, bread roll and caramel mousse ice cream. 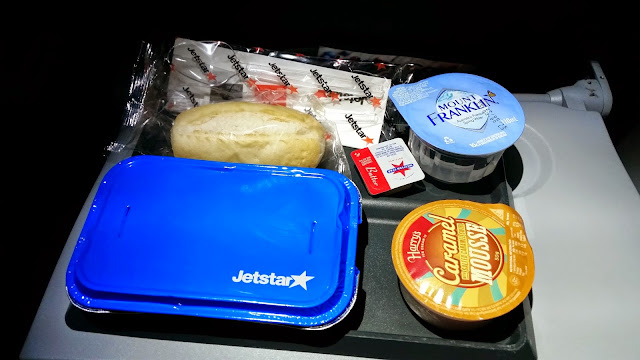 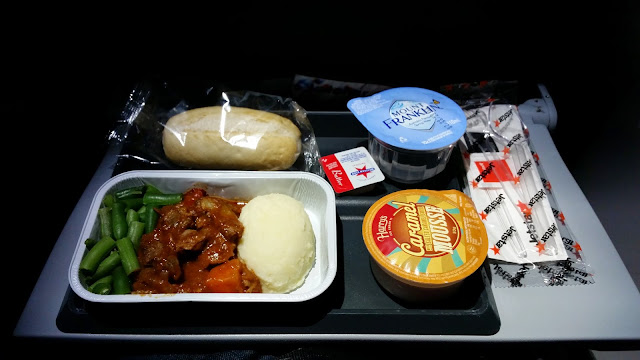 This was followed by complimentary tea and coffee for those who had meals included... 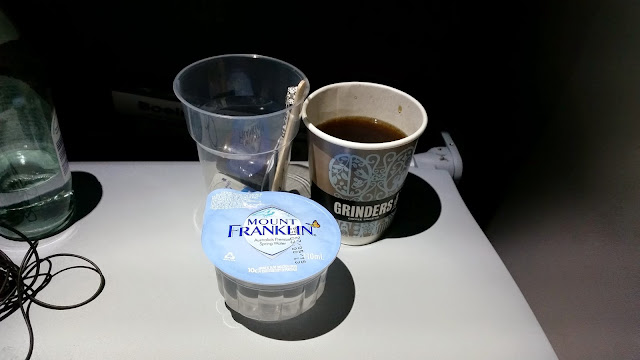 If you had not pre-purchased a meal then various snacks, sandwiches, pies etc were available at a charge. Only credit card is accepted, no cash. You can not buy the pictured meal on board, it must be pre-purchased. The taste was actually pretty good!

There is audio video on demand at a cost of $9 pre-paid or $10 buy on board, with in seat touch screens at every seat. You can view the moving map display free of charge though.

After dinner I actually slept the remainder of the flight by leaning against the window and resting my head on my jacket. For the time I was awake the service was good and I was actually fairly happy despite being on a low cost carrier in economy!


Now for the return trip. This was JQ44, the afternoon flight to Melbourne. This is such a good time for this flight, most other flights operate as red-eye's and they absolutely destroy the next day for you as there just isn't enough time to sleep on a 4 hour 45 minute overnight flight. JQ44 though departs at 2.30pm, with an arrival in Melbourne at a respectable time of 9.55pm. Scheduled at 5 hours 25 minutes gate to gate, the actual flying time is under 5 hours.

The aircraft operating my flight was VH-VKH, about 8 months old at time of flight.

I arrived at the airport only 85 minutes before departure and check-in was deserted. Most people had already checked in. It only took a moment to grab my boarding pass and head towards security and passport control. The whole process to get to airside was only about 10 to 15 minutes. I still had time to get some duty free liquor. These days at Denpasar airport you can buy liquor for Australia bound flights as they deliver it to the gate for you to collect. This has previously not been possible.

The flight was on schedule and boarding commenced at about 2.05pm. I had paid $25 extra to sit in the first row of economy, seat 10G was my chosen seat. I had been hoping for the middle seat to remain vacant once more but imagine my horror when yet another woman with a baby occupied it. 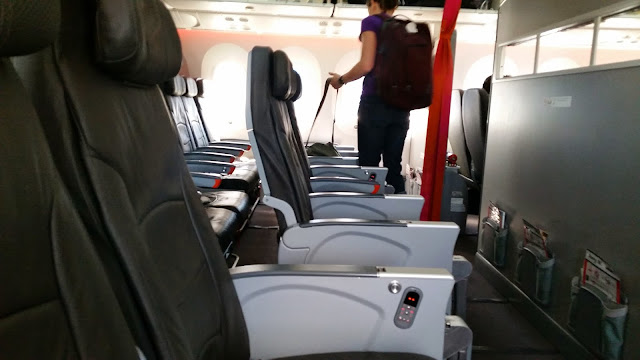 There is loads of leg room in row 10, I was very happy with it and would have been quite content had the 2 seats next to me not been occupied by a crying baby with it's mother and another young child. I had not realised this was a bassinet row, and I was going to be trapped behind a bassinet for 5 hours. Fortunately after takeoff I managed to move to the centre aisle seat in the same row where I was much more comfortable.

We departed on time and about 40 minutes after takeoff my meal arrived. Again I had the 'Plus' package which included the meal with tea and coffee. This time I had a beef curry with rice and it was quite delicious too. The ice cream and bread roll were of a cheaper and lower quality than those provided on the flight ex-Melbourne though. 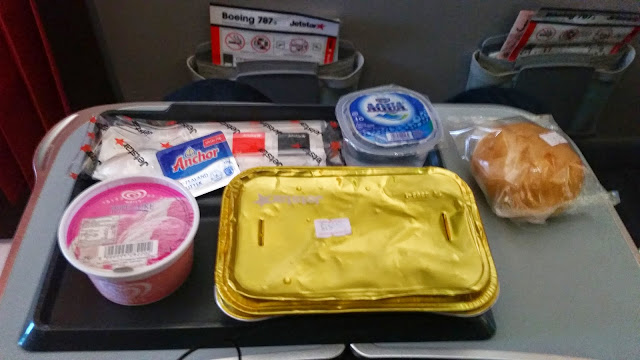 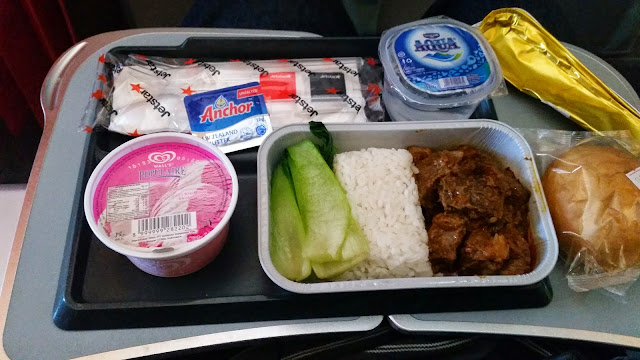 In bulkhead rows the AVOD screen is stored between the seats and can only be accessed after takeoff: 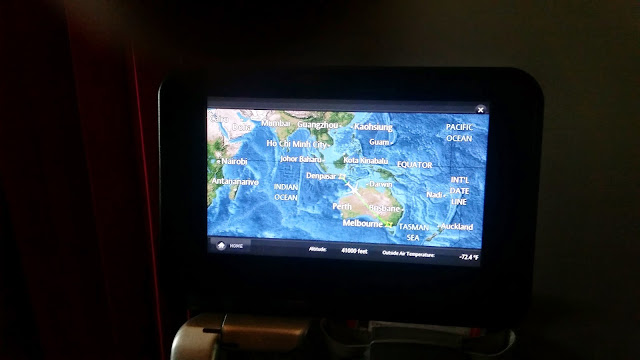 As the flight progressed I had a few wines, $10 for a wine with nut mix isn't too bad... 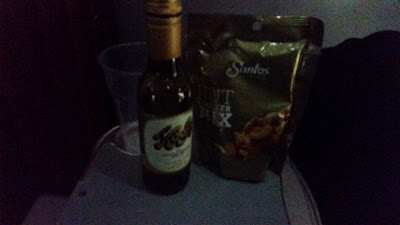 And before arrival in Melbourne I had a chicken caesar wrap which was quite ok. Service on this sector was ok, but the crew (all foreign-based crew) were not particularly friendly. They did just enough and nothing more.

I had been unsure what to expect on the B787 dreamliner with Jetstar in economy. I had been very tempted to take up the upgrade offers ($200 per sector) that were sent to me before the flights but I decided to save my money this time. For a 5 hour flight to and from Bali I was perfectly happy with what Jetstar provided. I know they cop a lot of flak for cancellations/delays etc but my flights were on schedule, in brand new very quiet B787 Dreamliners with quite tasty food provided. For the price I paid I can't ask for much more. I will use them again on this route. I can understand though that for a 10 hour trip to Honolulu on a full flight you may feel quite squeezed in due to the seat pitch and width, so I might avoid those longer flights at the moment.


NOTE: All photos on this post taken on my phone, I did not pack my DSLR as I was travelling very light on this short trip.