- August 22, 2015
Today I am finally getting around to writing a report on this regional hop with Sri Lankan Airlines. This was my first time ever flying with Sri Lankan, a recent recruit to oneworld alliance. This means I can earn Qantas points and status credits when flying with them, and makes for seamless connections with Qantas and other oneworld carriers.

With a 12.05pm departure I caught a cab to the airport from nearby Negombo Beach where I had been staying at about 9.30am. It's a pretty short ride to the airport and as we approached the terminal area the driver asked which airline we were flying and which class of service. When I mentioned Sri Lankan business he took a turn to a separate, private entrance area. We were greeted at the car by Sri Lankan airlines staff who grabbed our luggage and took it into a private check-in zone. I didn't even know it existed and I was very impressed. The staff were lovely and checked our bags through to Melbourne as well as issuing our onward Singapore to Melbourne boarding pass (on Qantas).

With check in complete it was up to passport control and onwards to the Serendib lounge: 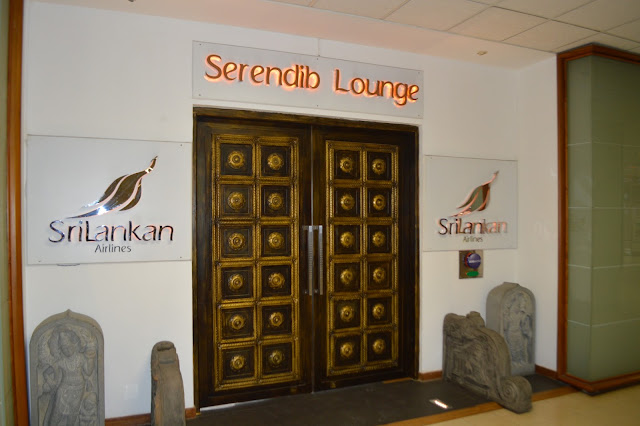 The lounge wasn't particularly modern in it's styling but it had comfortable seats, large windows with tarmac views and a well stocked bar with Champagne! So I was quite content. There is also a decent buffet with some okay food selections. Nothing exceptional though, just buffet items.


After a few champagnes the boarding time was getting close so I got up to leave. However the lounge staff stopped me in my tracks and told me not to leave until the flight was ready for boarding. They were quite insistent that we didn't have to waste any time sitting at the gate and they would let us know when it was time to go. Fair enough, time for a refill on the champagne then!!

Eventually it was time to go and I headed out of the lounge. Security is done at the gate in Colombo, a similar arrangement to that at Singapore Changi. Interestingly the aircraft operating today's flight was an Airbus A321, despite the original schedule showing an A320.

Here she is waiting at the gate: 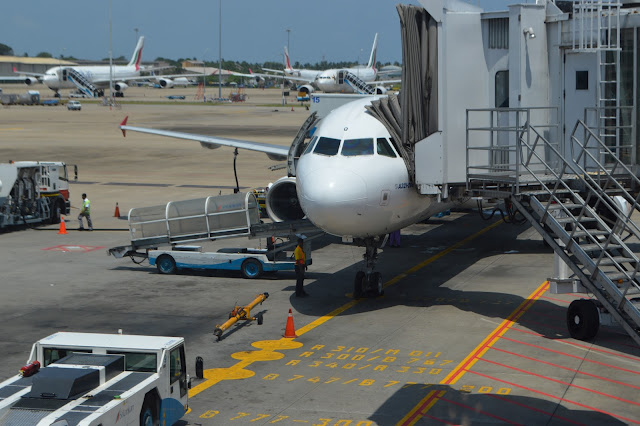 There was a bit of a wait still for boarding to commence but eventually boarding was announced, with oneworld elites and business class invited first. Soon enough I was on board:

The cabin was rather underwhelming. The seats in a 2x2 configuration are rather slimline and cheap looking. At least the seat pitch is rather generous. I found the seats fairly uncomfortable though, when compared to Etihad on it's A320 fleet. They appear to be made of leather, but it seems to be cheap leather. 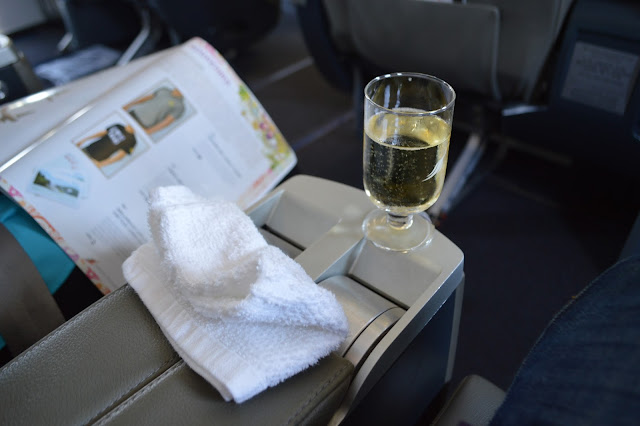 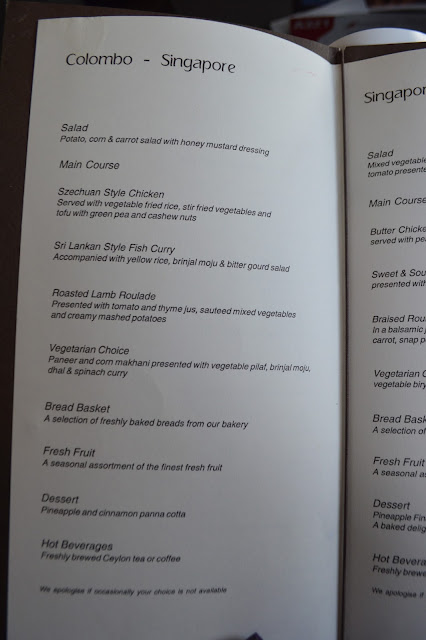 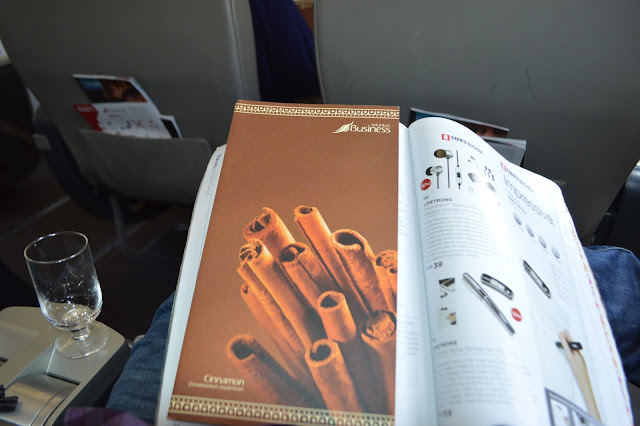 The menu seemed decent enough, with a selection of western, Asian (including Sri Lankan) and vegetarian dishes, along with a salad, fruits and dessert.

We were a little behind schedule by the time we pushed back and departed into the clear blue skies: 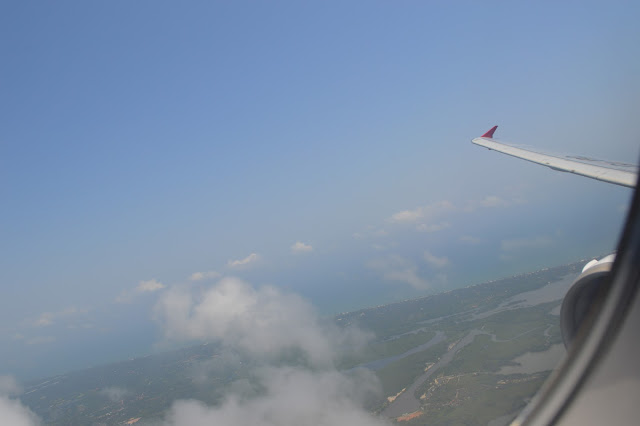 With clear weather the ride was smooth and I had a look at the entertainment system. Its provided on individual pull out screens: 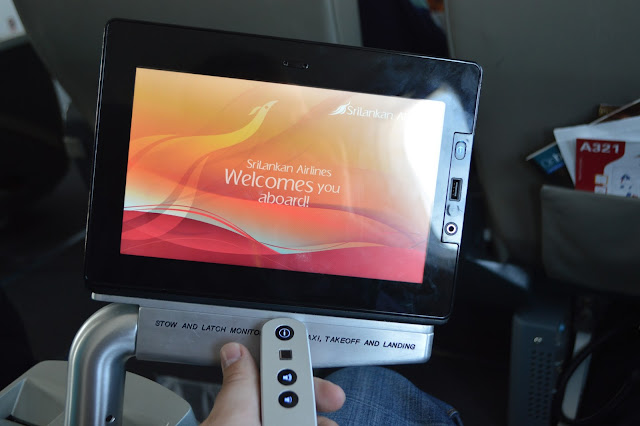 The selection was satisfactory, nothing like that on airlines like Emirates, but still enough to keep you entertained.

Next I had a fiddle with the manual seat controls (not electric like on Etihad!). I found the seat quite uncomfortable and the foot/leg rest was essentially useless. The seats just felt cheap and nasty: 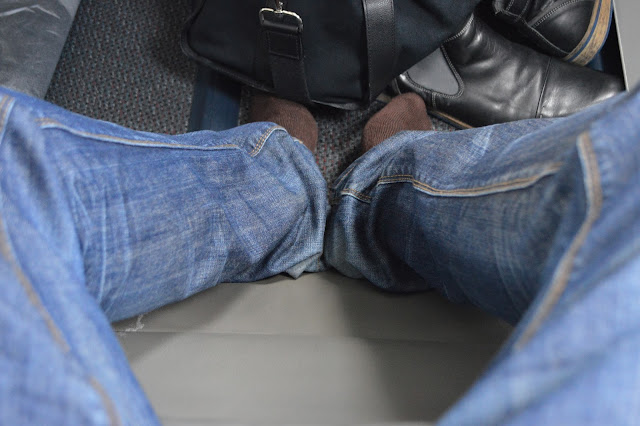 Although the seats were bad, the service was friendly with some very attentive cabin crew. A bowl of nuts and drinks was offered before lunch: 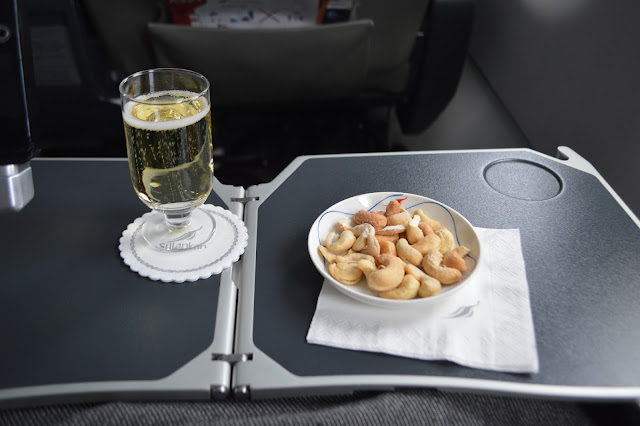 With a 4 hour 5 minute schedule flight, I had expected the meal to be quite large and served in courses but instead it was all served on a single tray (except dessert). This is how it looked:


My impression of the meal? Cheap and basically economy class in standard. The salad was made of potato and tiny, the main meal was sizeable enough but presentation was average. The taste was fine but it just didn't seem very 'premium' to me. At least the wine was free flowing and regularly topped up.

After finishing the main meal the 'Panna Cotta' was offered, with tea and coffee: 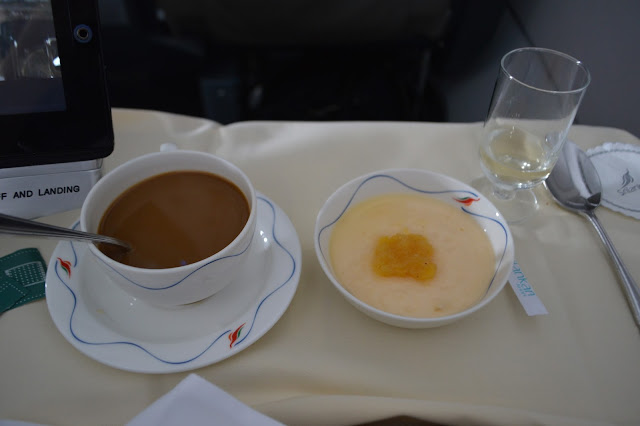 It was not like any panna cotta I've had before, it was basically a custard. It had not set like a proper panna cotta and was no where near creamy enough. It didn't taste bad, but it just wasn't as I would have hoped.

After lunch I reclined my seat and dozed a little before descent commenced into Singapore. Unfortunately we got put into a holding pattern and ended up landing about 30 minutes late which meant my connection was very tight. No time to check out the lounge in Singapore, had to run straight to the next gate for QF36 to Melbourne. Fortunately the bags made the connection and so did I.

It was good to experience a new carrier, and one that is now part of the alliance that I hold top tier status. However I wasn't exactly impressed with Sri Lankan. The ground service with dedicated curbside checkin zone was fabulous, and the lounge was good but onboard the seats were poor and catering average. The crew were beautifully presented though and totally charming.  Would I fly with them again? Yes, simply because they offer some amazingly priced business class tickets!