The New Qantas A330 Business Class : QF36 Singapore to Melbourne

- September 17, 2015
Over the course of this year Qantas have been progressively refitting the A330 fleet. The new business class seats they have chosen are lie flat pods in a staggered 1-2-1 arrangement, all seats having aisle access. Herringbone and staggered arrangements are the new world standard in business class and both have their advantages. This new seat whilst being an off the rack product, has been modified and 'Qantas styled' by their designer Marc Newson. To see what it looks like in its original form, you can see it at the Thompson website here.

Earlier this year I happened to be flying on QF36, the overnight flight from Singapore to Melbourne. I was fortunate enough to try the new product. Close to half the fleet are now reconfigured as at the time of writing (September 2015).

Upon boarding I was immediately quite impressed with the 'look and feel' of the cabin... 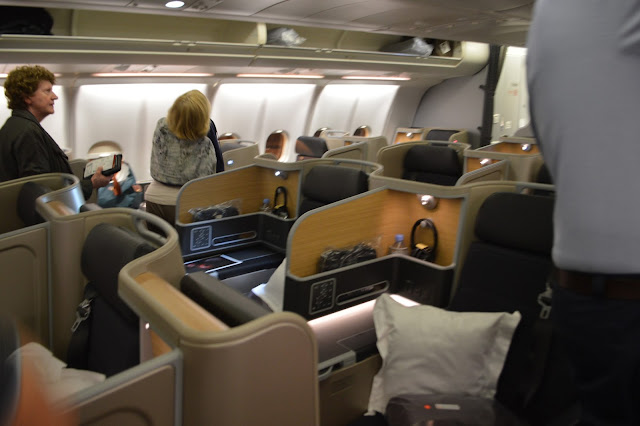 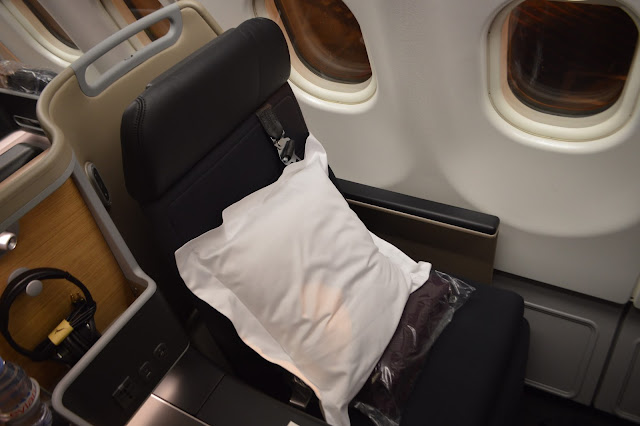 I had seat 4A which is positioned right next to the windows, the odd numbered rows have seats closer to the aisle. In my seat I felt I had loads of privacy and a lot of space. There is ample table space on the sides to have a laptop or ipad on without using the main tray table. The IFE screen was nicely positioned and was of a very high quality. If you can get an even numbered row on the window I highly recommend it.

At my seat was a duvet, pillow, Oroton amenity kit, noise cancelling headphones and a menu. Before takeoff the flight attendants came and put mattress covers over the seats as well for those who wanted them. 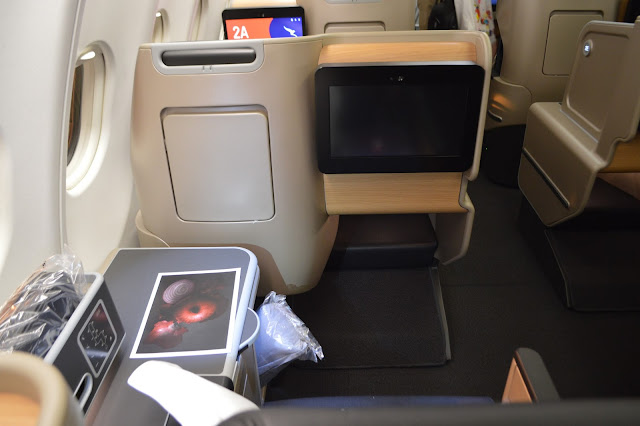 A bottle of Evian water was also provided in it's own storage area, as pictured below: 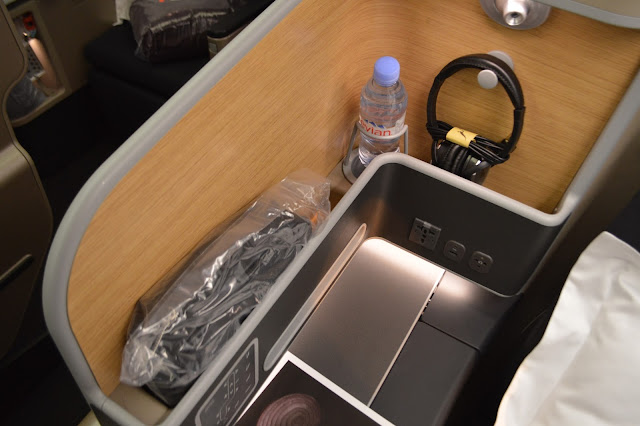 The Oroton amenity kit was designed exclusively for flights on the newly configured A330's. It is a high quality case which includes a bunch of amenities and also a pair of pyjamas. Qantas is one of the few airlines to provide PJ's in business class. I now use this as my main toiletry kit when I travel! 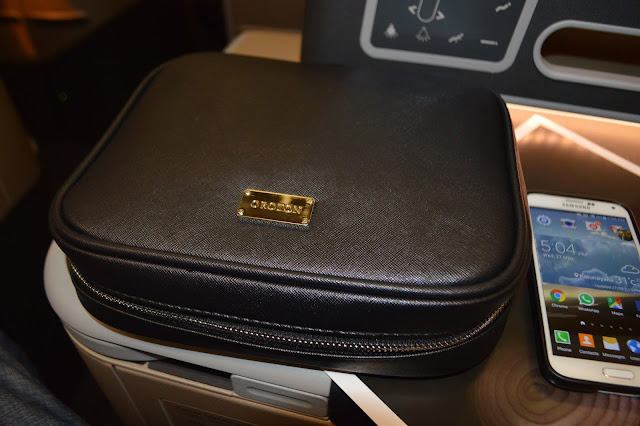 QF36 departs Singapore at 7.55pm local time and arrives in Melbourne at 5.20am. Considering the departure time and a flight that is often only around 6 hours 30 minutes, the service focus is for maximum rest. With this in mind, a limited supper is offered and then a fairly short breakfast service around 80 to 90 minutes before landing. The Qantas website manage my booking page has a new 'Select on Q-eat' service whereby you can choose your main course online prior to the flight. If you use that service there is an additional main course to choose that is not available in the onboard menu. I decided to order my meal online and I chose the online exclusive option, a Bulgogi Beef Burger.


A storm hit Singapore as boarding was still under way, but we still pushed back on time. While I was waiting for takeoff I browsed the IFE: 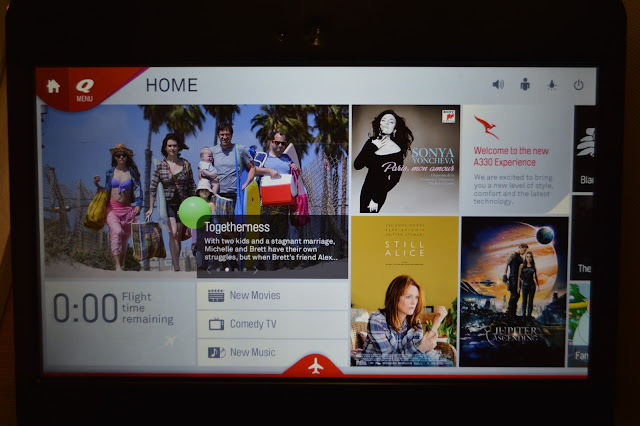 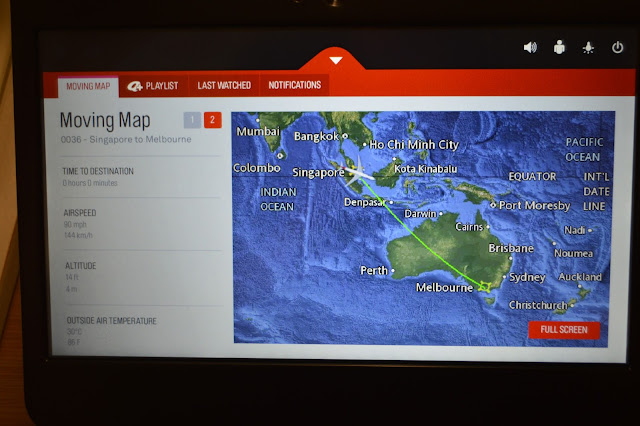 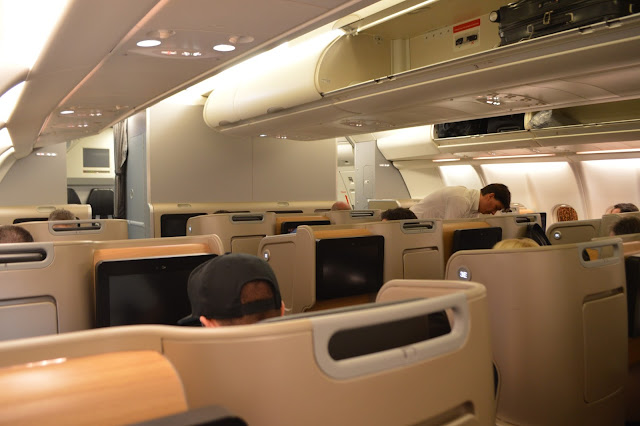 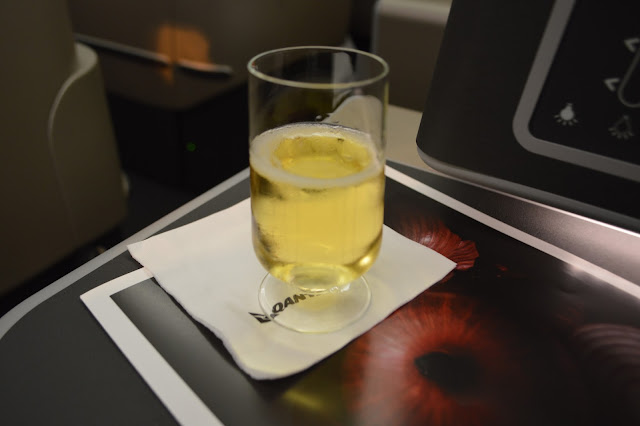 Here is my seat with the mattress set up, note that the seat can remain partially reclined for takeoff and landing! 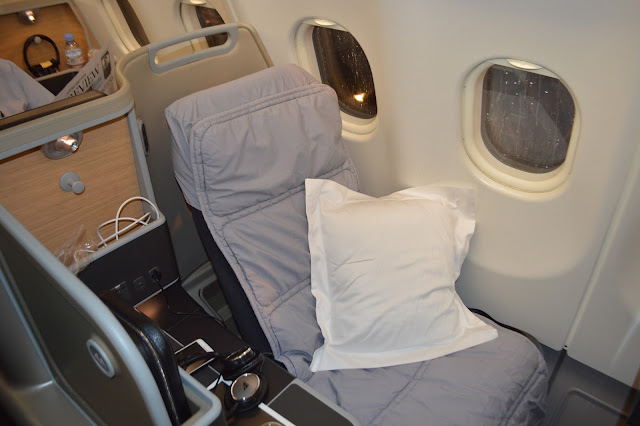 We took off in a fairly heavy downpour with lightning in the area but the flight conditions were surprisingly smooth. It wasn't long before the seat belt sign was extinguished and supper began. Drinks were offered and I had a rather delicious chardonnay. The service was remarkably quick, I had my drink within about 20 minutes of takeoff. This was significantly better than the 80 minutes it took Emirates on the same route in business class earlier this year.

My drink was served with a packet of pretzels with cashews, I still think the nuts should be served in a bowl and not in a packet: 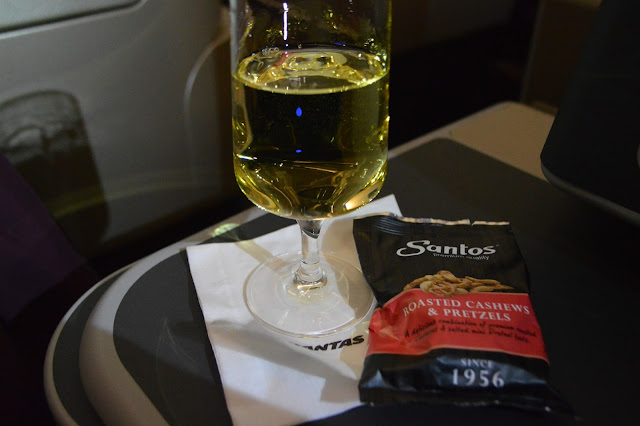 After my post-takeoff drink the tables were set for supper: 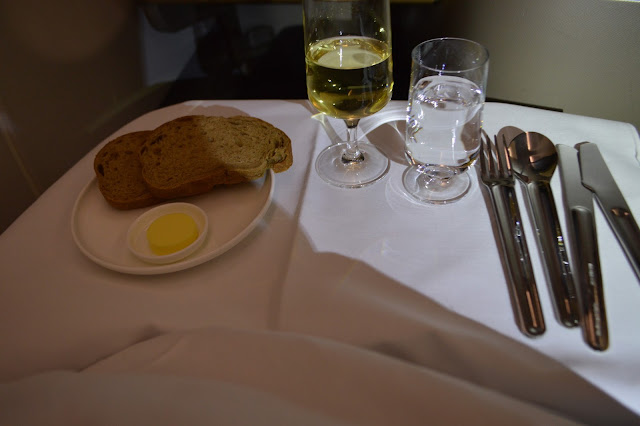 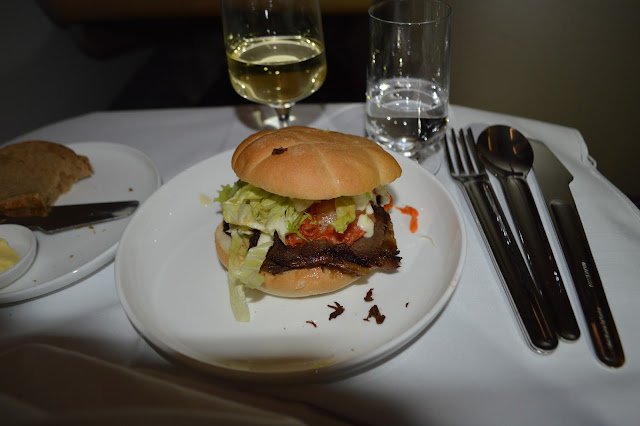 It was a very simple dish but it was rather delicious. This was followed by a tub of haagen dazs ice cream, with tea and coffee. I had a peppermint tea before it was time for bed. I suspect some might find the supper service woefully inadequate for an international business class flight, but I found it was just right. I had eaten on the previous flight from Colombo so wasn't particularly hungry. If you originate or have a long transit in Singapore there is the opportunity to have a lovely dinner in the Qantas Singapore Lounge. 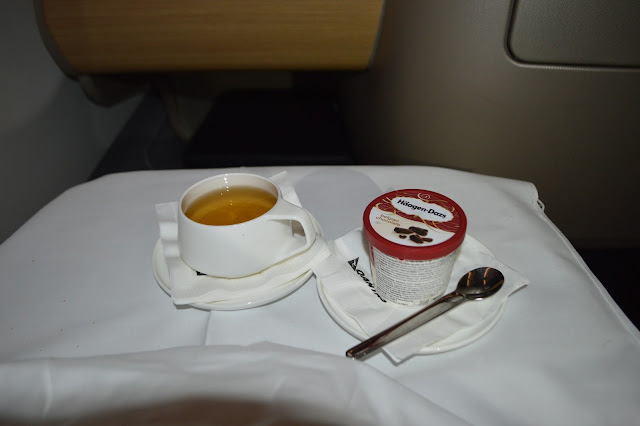 There are snacks of fruit, cookies, chocolate bars and ice creams available at any time during the flight as well, if you still feel peckish.

With only about 80 minutes of the flight passed, I was ready for bed. The crew seemed very efficient in getting supper over and done with (considering it was a fairly small meal that should be expected I suppose). I slept in my fully flat bed soundly until about 90 minutes before landing. Breakfast was being served when I woke up. It's worth mentioning there is an electronic do not disturb sign that you can set on your seat if you don't want to be woken up. Again, to maximise rest time the breakfast is a fairly 'express' type service however there is plenty to eat. I had the hot baked eggs, a smoothie and some muesli with milk. Fruit salad with yoghurt was also available. Of course, tea and coffee were also provided.


Again, I think Qantas have the balance right on this sector. It is only a 6 hour 30 minute flight (at the most 7 hours depending on the winds) and you just don't need to be continually eating. The supper and breakfast are ample and all I wanted on an overnight flight like this. Qantas previous only offered a continental 'cafe' breakfast but due to customer input they do now offer a hot dish at breakfast, in this instance a simple bowl of baked eggs.

I managed a very decent 4 hour nap on this flight between meals. Many passengers of course slept the whole way, as I suspect some had full days ahead. The service I thought was exceptional, very polite and attentive cabin crew. It was great that once buckled up I could still keep my seat partially reclined for the landing, allowing me to doze off again during the descent and not be disturbed by the crew.

As the flight drew to a close  I felt very satisfied with both the hard and soft product, Qantas are really improving. I'd like to try the reverse daylight flight on this new seat in the near future. Good work Qantas!