- March 29, 2016
I have very fond memories as a teenager of flying between Sydney and Wagga Wagga on Ansett Fokker 50's. I believe I did 2 return trips before the Saab 340's took over the run with Kendall Airlines back in the mid 1990s.  A number of the ex-Ansett Fokker's saw themselves transferred to Western Australia in the Skywest fleet which was later taken over by Virgin Australia. Late in 2015 it was announced that the Skywest Fokker 50 fleet was to be retired and routes to Albany, Esperance and Ravensthorpe terminated. Since I had an emotional connection to the aircraft type and it's operation in Australia I decided I had to go over to Perth and fly on them before they went. So, in December 2015, and about 20 years since I had last been in a Fokker aircraft I found myself at Perth Airport in the recently built 'regional' terminal.

My routing on the Fokker 50 was booked Perth-Albany-Perth-Esperance. All 3 sectors were scheduled to be flown by the Fokker 50.

After arriving at the main Virgin domestic terminal in Perth I made my way outside to walk to Terminal 2, which is used for regional flights. At the time of my flight there was no internal walkway between the terminals but one was under construction and may have been opened by now. 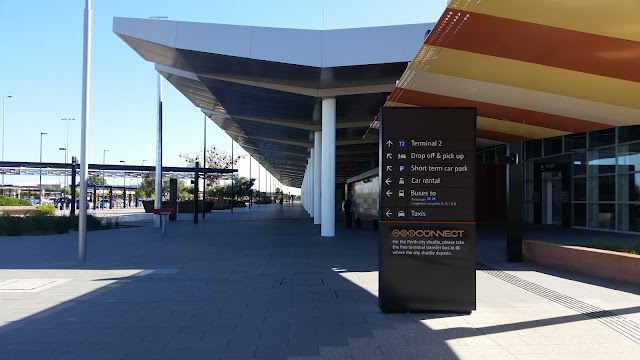 I made my way to the Virgin Australia T2 regional lounge, access was granted due to my Etihad Gold status. This lounge is small but comfortable with a nice selection of food including a very tasty chicken caesar salad. Beer and wine are available upon request from the staff. 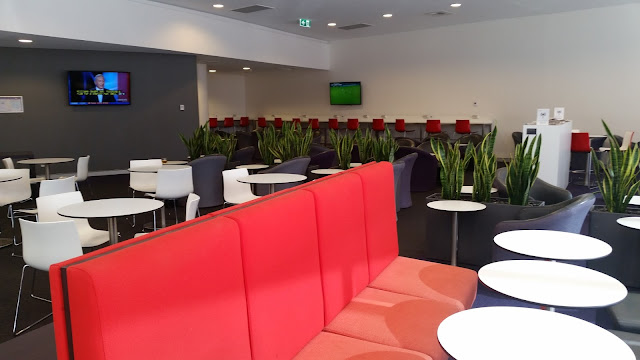 There was only myself and 2 other persons in the lounge waiting for the last Virgin departure of the day, the flight to Albany on the south west coast of Western Australia. Eventually the flight was called and I made my way into the main departures zone.

The T2 regional terminal is used by Virgin Australia Regional (Skywest) along with Alliance and Tigerair. Our flight was called and we turned right to walk towards the aircraft along a covered walkway. We were briefly held there waiting for the aircraft to be ready. I could see our aircraft today would be VH-FNE, a 25 year old Fokker 50 which operated initially for Philippine Airlines, passing hands a number of times before coming to Skywest in 2006.


I think the Fokker 50 is a great looking aircraft, they look really solid and with it's similarity to the Fokker 27 it's like flying in a bygone era again.

Eventually we were told to board the aircraft and we walked a short distance across the tarmac and up the built in airstairs. Look at the shape of those cockpit windows! 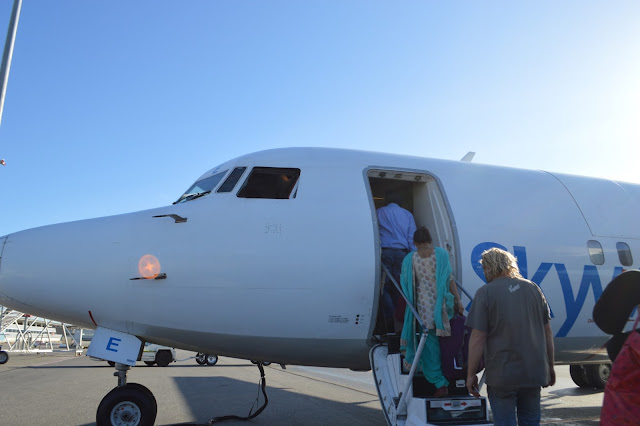 I settled into 1G, a bulkhead seat. I was soon joined by another passenger beside me who was another large male so things were a little tight. Legroom was sufficient but I think I made a mistake picking the bulkhead, it's probably more comfortable up the back. The cabin itself is roomy though with plenty of head room. The overhead lockers are fairly small and large roll-a-boards would not fit in. I loved the very 'retro' overhead panels too. 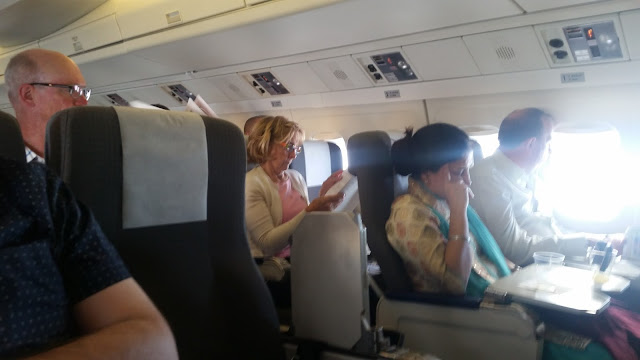 There did not seem to be any power to the aircraft to provide air conditioning on the ground, and as it was a hot day, I was sweating profusely by the time the door was closed and the two flight attendants started the safety briefing. Eventually the engines started and air started flowing from the vents.

It was quite surprising how quiet the engines were, not really that much different to a Q400 I thought. Considering this is a 1980s design I was still remarkably comfortable on board. We took off in the slowly fading light and tracked south towards Albany. 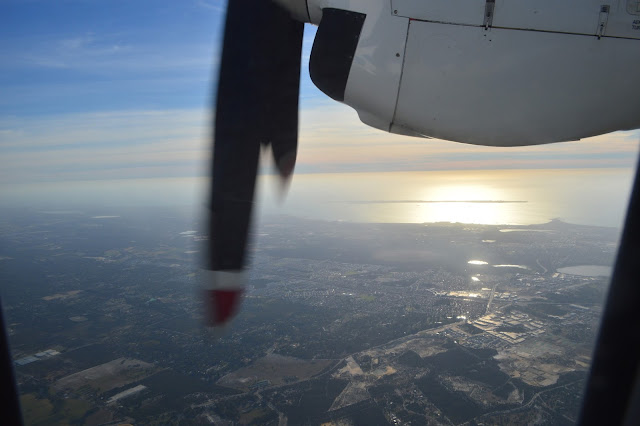 I had a look at the lavatory, it was incredibly old looking but completely functional... 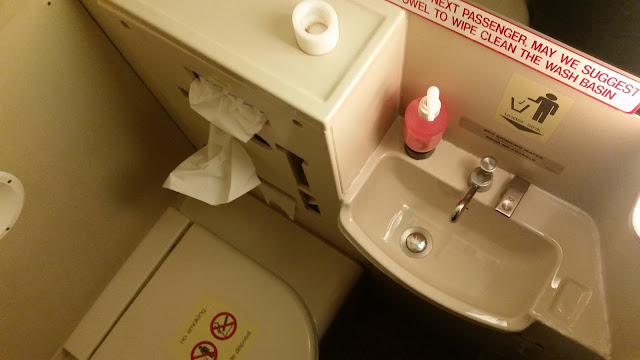 This aircraft had a forward storage area for the catering trolleys as you can see in the above photo. Once the seat belt sign was off the flight attendants got the trolleys out and commenced the inflight service. As this was an evening service complimentary beer and wine is provided along with a small snack. I decided to have a Fat Yak beer, the snack was a small packet of cashews and pretzels. 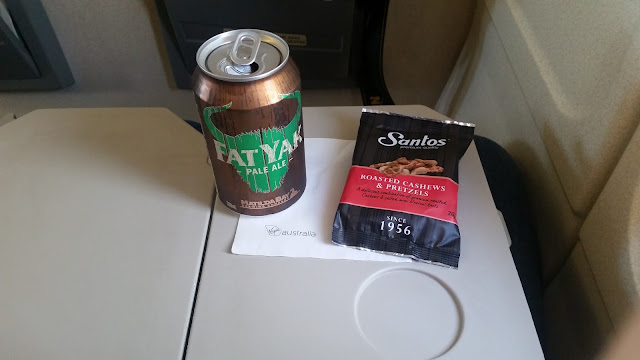 After about 45 minutes in the air the descent commenced. One of the things I love about Fokker 50's and Dash 8's is that you can watch the landing gear come down from the cabin: 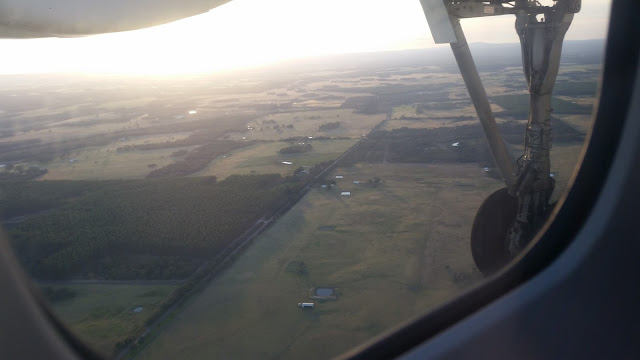 We made our landing at the small airport of Albany and taxied to the terminal. This is the only air link out of this city, and since the termination of Virgin Australia services it is served solely by Regional Express on the Saab 340.

I snapped another photo of the seats on the way out: 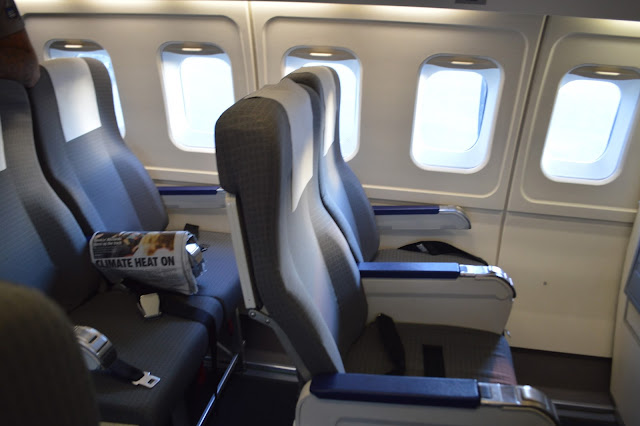 I would be staying overnight in Albany so went to the rental car counter and picked up the keys for my car for the night.  There was a couple of cabs lined up outside for those looking for ground transport: 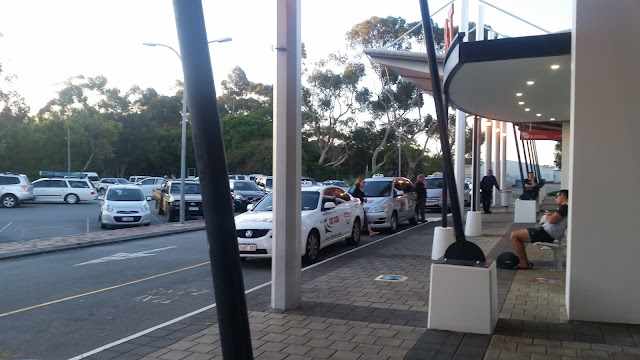 From the rental car parking area I took a final snap of VH-FNE in the fading light. It would shortly be turning around and heading back to Perth. 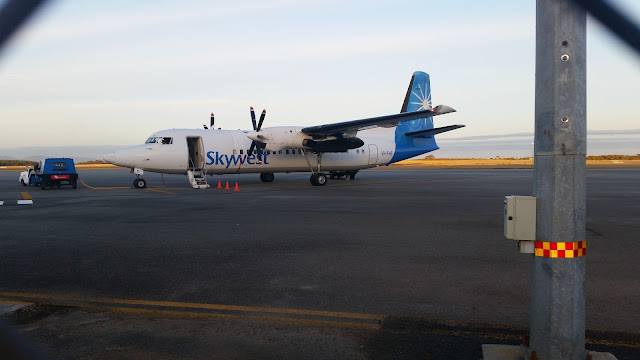 I thoroughly enjoyed this Fokker 50 service. It was reasonably quiet, fairly comfortable and operated on time. The onboard service with free Beer was perfectly acceptable and I suspect that free alcohol would not be available on the new Rex services so this may be missed by the locals.

Next up the flight from Albany to Perth then on to Geraldton....
Fokker 50 trip report virgin australia