So, this review is already out of date because the seats have been replaced but here is a quick look at a flight I took in April this year with Virgin Australia from Brisbane to Los Angeles.

Virgin Australia operate a small fleet of 5 B777-300ER's, serving Los Angeles from both Brisbane and Sydney, along with the Sydney to Abu Dhabi route. This is flight VA7, the daily flight from Brisbane to Los Angeles. Virgin compete with Qantas on this route who fly a daily B747-400.


I was in transit when I arrived at Brisbane, having checked in at Melbourne for this trip. So my bags were sent through and I took the shuttle from domestic to international and passed through passport control and from there into the new Air New Zealand lounge.


The new lounge was quite busy but I thought very nice. It's an open air type arrangement so you are still connected to the large terminal around you with huge glass windows facing out to the apron. It's quite an attractive little airport in Brisbane... it was a nice change from Melbourne which is a lot more enclosed. 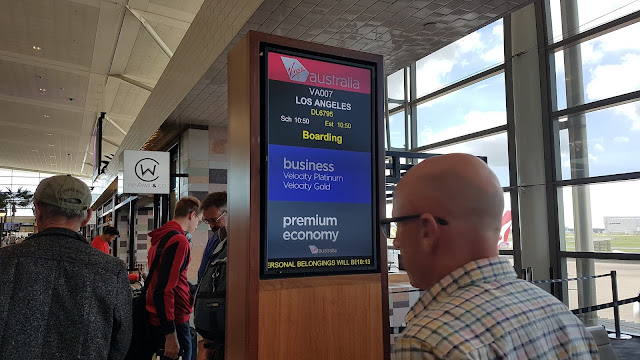 Priority boarding was available for those travelling in business, premium economy, or for those with platinum or gold frequent flyer memberships. The flight is codeshared with Delta as well.


So, here is the big disclaimer. Note that when I flew this flight the airline was in the process of upgrading from a 7 abreast fully flat forward facing business class seat, to a new herringbone suite type arrangement at 4 abreast. But whilst these seats are no longer available, the service is essentially the same. 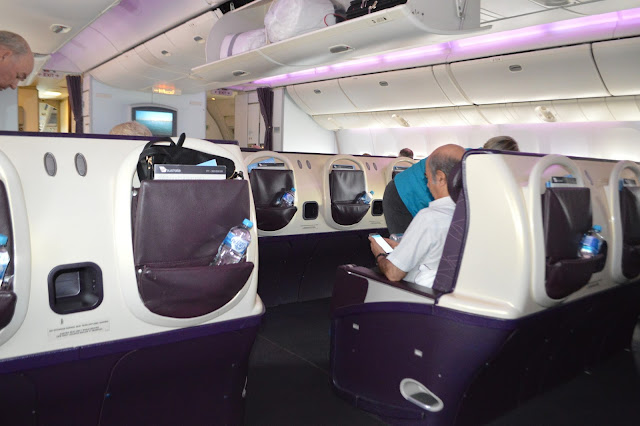 The flight attendants have a set bunch of seats they each look after exclusively, so ours introduced herself upon boarding and she looked after us throughout the flight. First up the pyjamas and amenity kits were provided: 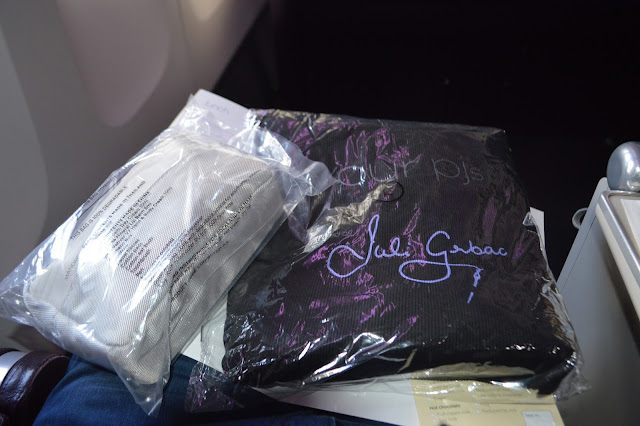 Followed by the menu: 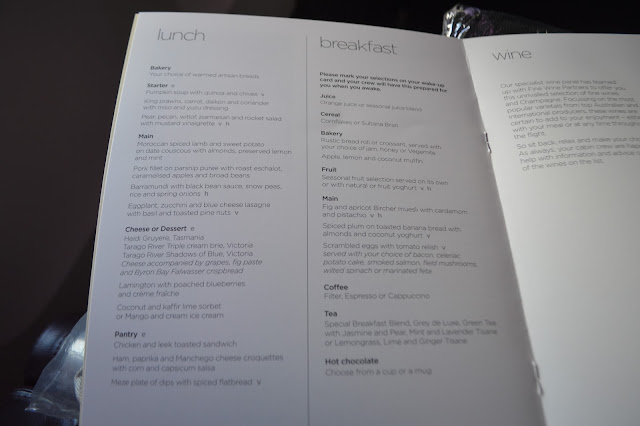 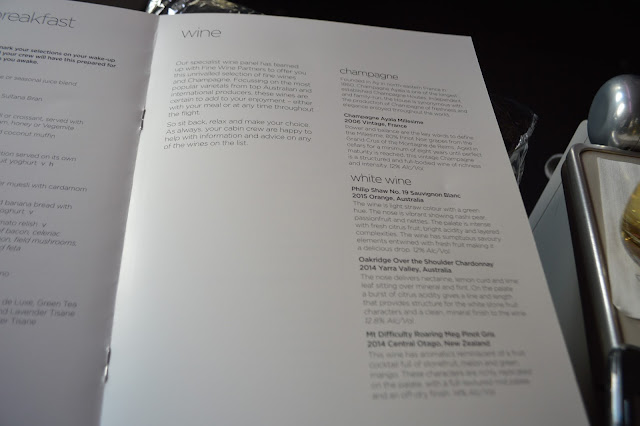 It wasn't long before we were up and away and headed for LAX. Soon after takeoff the first round of service commenced. Pre-lunch drinks and a choice of either almonds of olives to go with it: 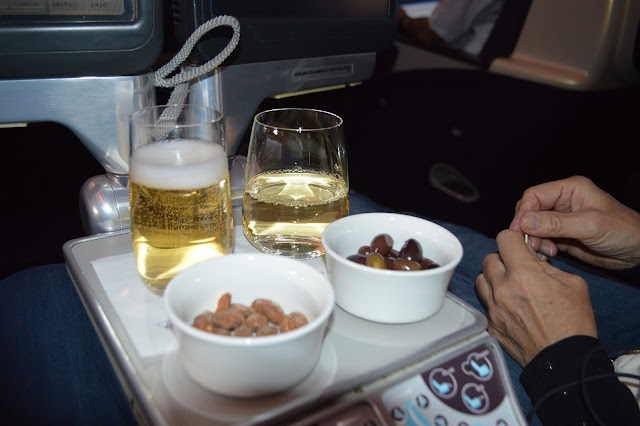 Unfortunately VA insist on using stemless glassware which I don't like but it seems to be a trend these days. I guess it is much easier to store in the galley than a long champagne glass.

The table was laid for lunch, including the signature opera house salt and pepper shakers: 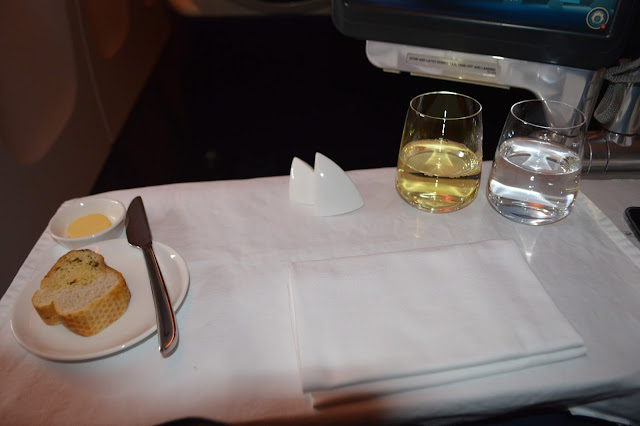 I was travelling with a friend so I can show you a good selection of what was on offer...


The meal was absolutely wonderful. Everything was just delicious. The service to go with it was wonderful too. Drinks were regularly refilled and it was a great experience.

Once we were done I had a look at the bar area which is between the forward business cabin and the 2nd mini cabin: 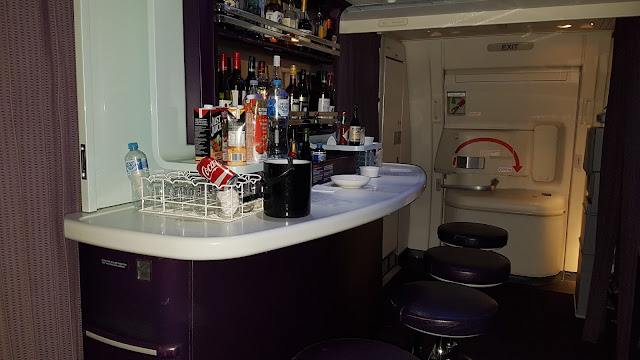 It's a nice little space with self service drinks and snacks available throughout the flight. I decided to change into my pyjamas and laze around in bed for the middle chunk of the flight so I asked the flight attendant to make my bed. They have memory foam mattresses to cover the seats and I must say that despite this being the old product, it was very comfortable. The beds were fully flat too which was great. The only issue is trying to climb over the person in the aisle when you have the window seat.

Before I slept I had handed a breakfast order card to the flight attendant, so they would know what we would be having upon waking up. I love this service. A little under 2 hours from LA the mood lighting started simulating a sunrise and it was time for breakfast to commence. The breakfast service was done with trays.

Soon enough we were on descent into Los Angeles: 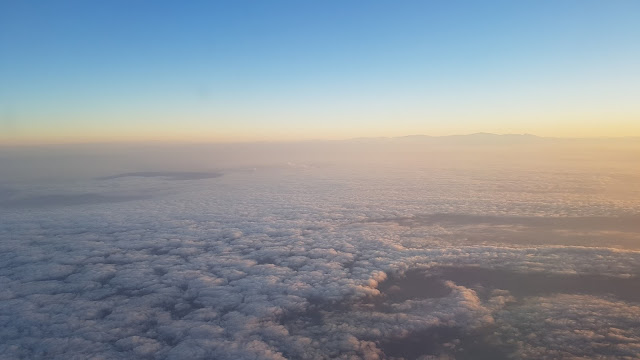 It was a great flight with Virgin Australia, I can't wait to try it out again with the new seats!