- November 12, 2016
Here is a trip report on a recent flight I had with Singapore Airlines from Singapore to Melbourne in business class.

After a visit to the T3 Silverkris lounge I headed to gate B5  for the departure. I arrived at 10am with boarding not yet started and found 9V-SKQ at the gate. This was one of the newer A380's, only 5 years old. It has the upper deck configured exclusively with business class, 86 flat beds in total!

Those that have flown the 2006 SQ business class seat know that the bulkheads are generally preferable as they have more leg space since there is no seat in front. I had chosen the centre bulkhead in the rear cabin, seat 91F. When boarding was called I noticed very few other passengers joining me on the upper deck jetway.

After sitting in 91F I was immediately offered my choice of welcome drink, the 2 flight attendants working the rear cabin informed me that only 2 passengers were sitting in that area for this flight. Amazing! I ordered a champagne and started getting settled in. At this point an announcement was made that boarding was being suspended due to an APU (Auxillary Power Unit) failure which meant we had no air conditioning. It was already getting very hot in the cabin but I assumed it would be sorted out fairly quickly. A few minutes later the announcement was made that all passengers would have to disembark! I collected my belongings and the crew told me they would keep the champagne cold and bring it back as soon as I returned. A thousand apologies were offered by every crew member I passed on the way back to the jetway.

After sitting in the gate area for 15 minutes or so boarding started again and I was soon back in 91F and presented again with my champagne. Because of the issues with the APU we departed around 40 minutes late and had to start 2 engines at the gate with ground power.

Soon enough though we were on our way making a smooth takeoff in good weather. The seat belt sign was turned off about 10 minutes after departure.


Here is a view of 91K, one of the other bulkhead seats in this cabin, and one I could recommend. It's very private as it sits forward of the centre seats: 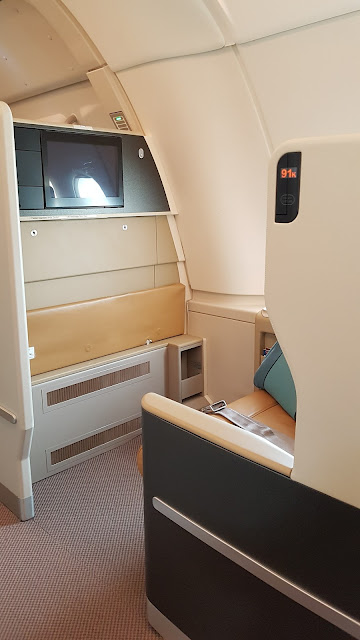 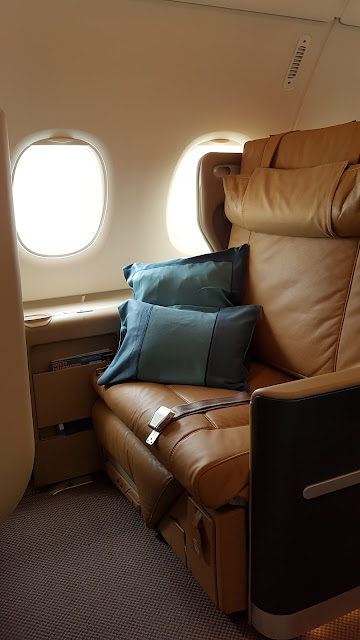 After takeoff I reclined my seat, but be aware that these seats only recline a small amount, to go into bed mode the whole seat needs to be flipped over. They make great beds these seats, but for relaxing and watching movies they are not as nice as those found on say the Qatar A350, or Etihad B787 and A380.

The crew had taken lunch and drink orders before takeoff and I order the jubilee cocktail which came with a packet of nuts: 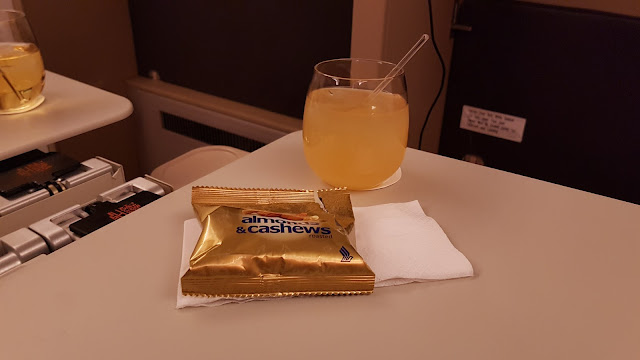 It surprises me that an airline of Singapore Airlines calibre does not serve nuts in a bowl, instead they came in this rather cheap looking packet! After the drinks and nuts were done (a second helping of nuts was offered as well), the table was laid. Next up the starter was served.... as I have mentioned before on this blog there is no choice when it comes to a starter. On this flight it was tuna...

Too bad if you don't particularly like tuna because there's nothing else. The bread basket came soone after the starter was served and had a good range of breads including garlic bread (my fave).


I had pre ordered the "Seared Lamb Loin" with the book the cook system. For those who don't know you can order your business and first class meals on SQ from a large menu in advance, or you can wait and order from the menu on board. Here is how the lamb looked: 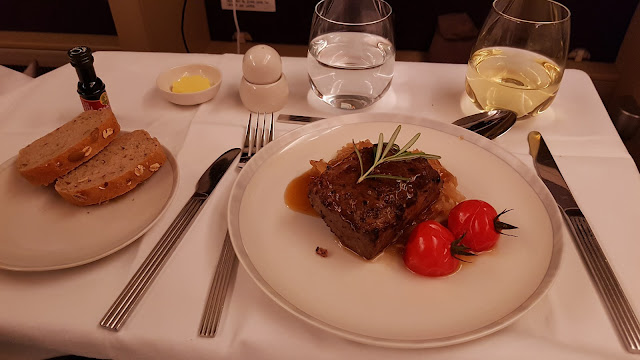 I was drinking an Australian chardonnay with it, Devils Lair from Western Australia, a nice wine that I have had many times previously. There is also a pre order lobster therrmidor available on SQ which is quite popular, this is how it looks: 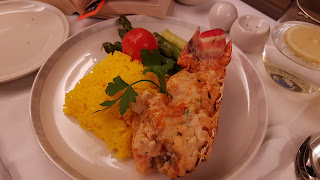 For dessert there was a choice of either fresh fruits, a tofu cheesecake or ice cream. Here is the cheesecake: 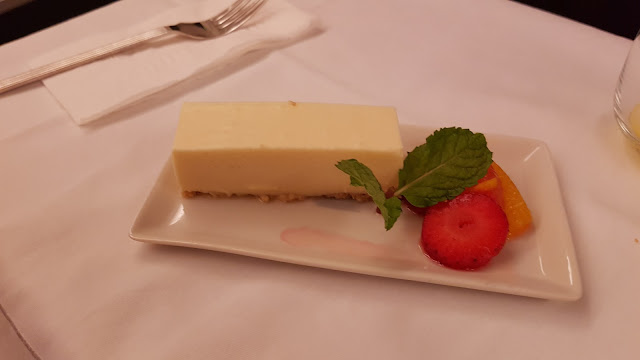 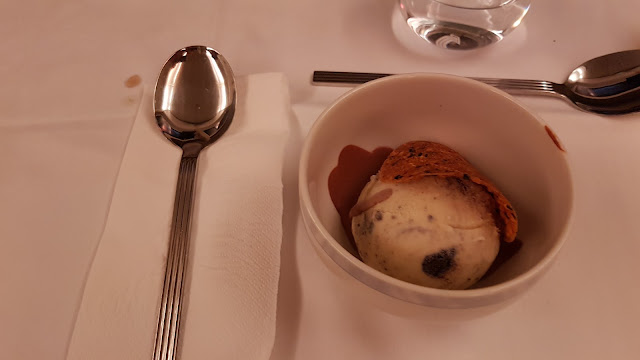 Both were nice with the cheesecake being very light and fluffy and a good option if you don't like something too sweet.

Fruit and cheese were served from a trolley where you can choose what you like, here is my choice: 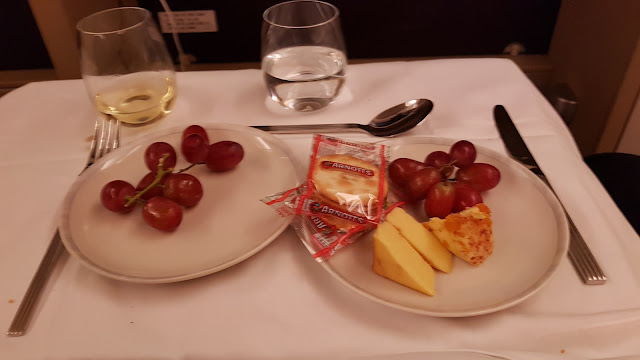 While I was having lunch I watched Ghostbusters on the AVOD system, Krisworld. I was pretty unimpressed with it actually, but fortunately the Krisworld system has hundreds of entertainment options to choose from. Phitek noise cancelling headphones are provided, they are ok but not as good as what American Airlines offer with BOSE headphones.

After lunch I was so tired from a long journey that I went to sleep immediately. These seats fold down backwards to form a bed with a mattress and a nice blanket. I got 3 hours solid sleep before it was time for a refreshment before landing. I had ordered the burger from the book the cook menu, it comes 'deconstructed', like this: 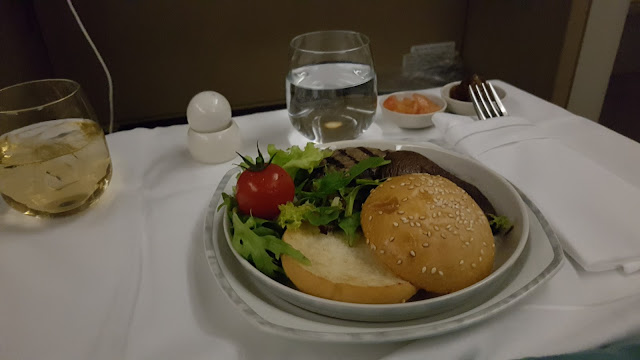 The burger was good and we were soon on descent into Melbourne as the sun was beginning to set: 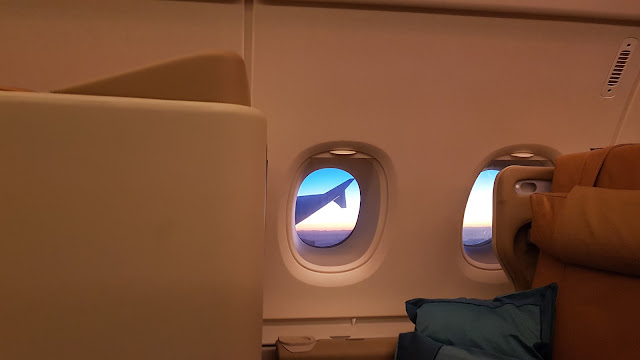 Some pretty strong winds made for a wild ride on approach, one of the roughest I have experienced  in an A380. But we landed safely pretty much right on schedule, having made up the time lost on the ground in Singapore with the technical fault.

This was the 3rd time I've flown this flight in the past 12 months in business class and it was much the same as the others. Efficient Singapore Airlines service with nice food and not quite enough time to get a good sleep. The things I still take issue with are the lack of choice on the starter and the fact that nuts are handed out in a packet not in a bowl. Other than that it's a great flight and although these seats are 10 years old now they are still a comfortable way to travel.
Airbus A380 business class singapore airlines trip report