- February 06, 2017
For my trip to India I decided to start on the east side of the country (Kolkata) and work my way west and south, ending in Goa. Since I was coming in from Bangkok this meant I needed to find a flight from Bangkok to Kolkata and once I realised Drukair was an option, there was simply no other choice! I headed straight to the Drukair site, which is remarkably user friendly, and booked flight KB121 at a cost of USD126. Quite reasonable I think and cheaper than Thai who flew at a much less friendly time of day.

After an early start at the Millenium Hilton I grabbed a cab and arrived at Bangkok's Suvarnabhumi airport at about 7am, 2 hours prior to scheduled departure.

I quickly scanned the monitors to find the check-in zone for Drukair. It was row P so I headed down there and found large crowds of people trying to check in large flat screen TV's and other electronics which are clearly more expensive in India or Bhutan. Flight KB121's final destination is Bhutan with a short stop in Kolkata. One day I will hopefully visit Bhutan as well.


Once check-in was complete I headed through security and passport control and into the terminal. I had a quick breakfast in one of the restaurants then headed down to gate E1A, which is a bus gate. It was pretty chaotic there as a Thai Airways flight to Phnom Penh was delayed and all those passengers were waiting in the same gate area. When eventually the Drukair flight was called all the Thai passengers thought it was them so they all started lining up again! Quite a mess. Anyway I was soon through it and onto the bus. 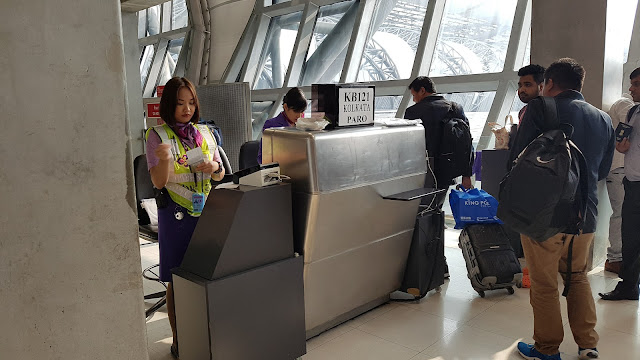 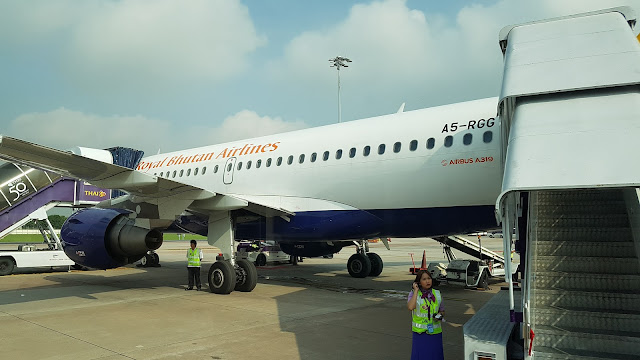 Boarding for economy was from the rear on this flight - which was looking to be quite full. Mostly Indian and Bhutanese guests with a few western tourists who were mostly continuing on to Paro. 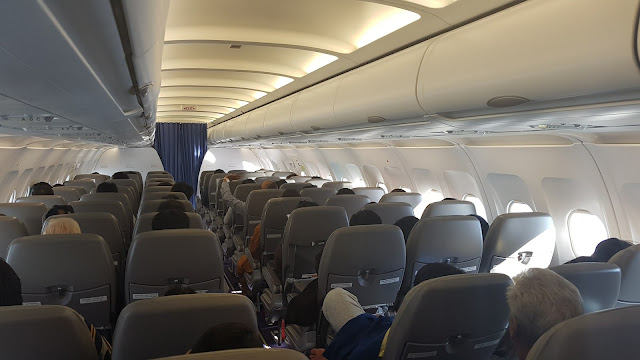 There were absolutely endless requests for glasses of water from the passengers around me, this is during the boarding process. Apparently it's quite normal as the flight attendants were happy to accommodate, bringing plastic cup after plastic cup of water to the passengers. Soon enough though, doors were closed and those guests would need to wait at least 20 minutes or so before they could ask for another glass!

Once in the cruise the meal service commenced. Drukair is a full service airline with free meals, drinks and baggage. The meal for me this morning was chicken with omelette, it came with a croissant as well as fruit and cake. Quite a large and decent meal really, no complaints from me! A small juice came on the tray and then there were other cold drinks and tea and coffee available. I had a coffee and a mango juice. 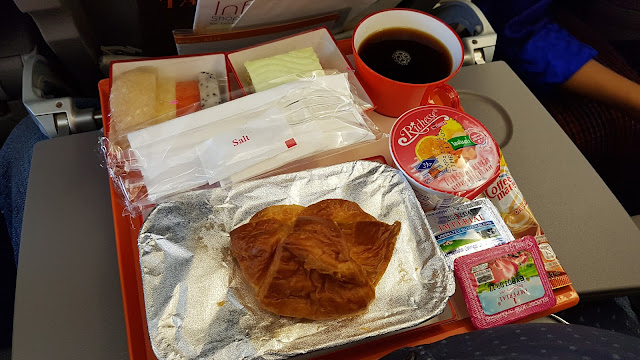 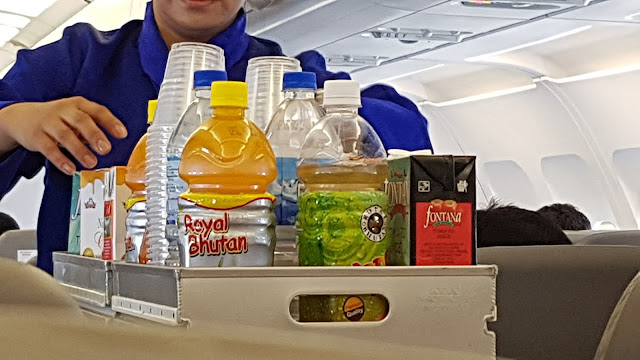 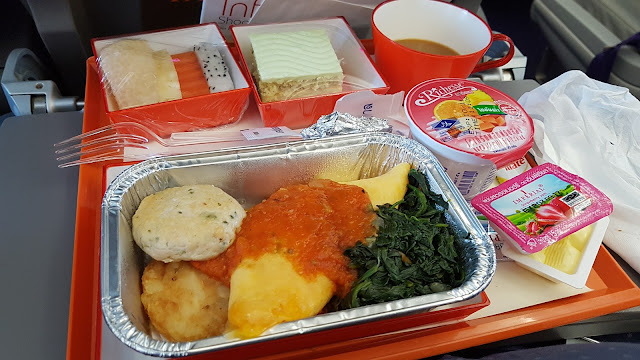 By the time the meal service was done we only had about 40 minutes remaining. There are no inflight entertainment systems on board and just an inflight magazine in the seat pocket for reading materials. I brought my own entertainment with me so I was satisfied, and you should too if you want to watch anything! The flights are short so they can get away with this minor shortcoming. Soon enough we were on descent into Kolkata, India! 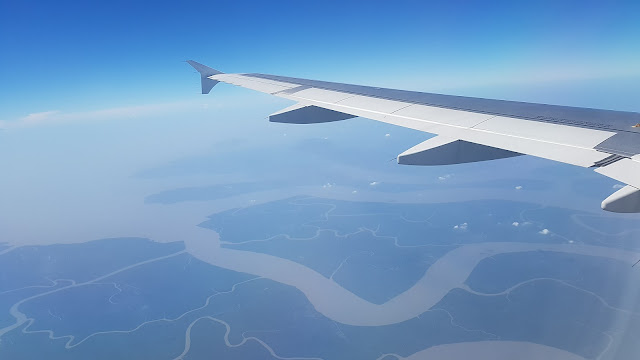 The massive metropolis of Kolkata, amazing! 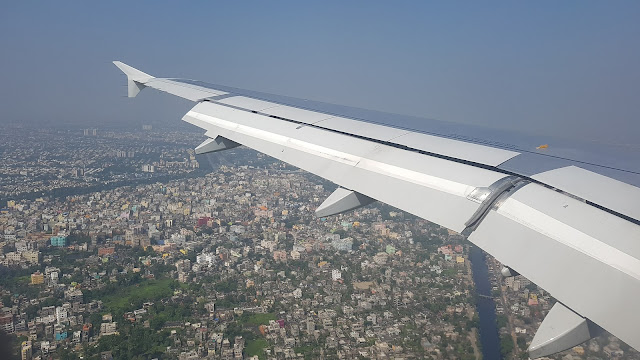 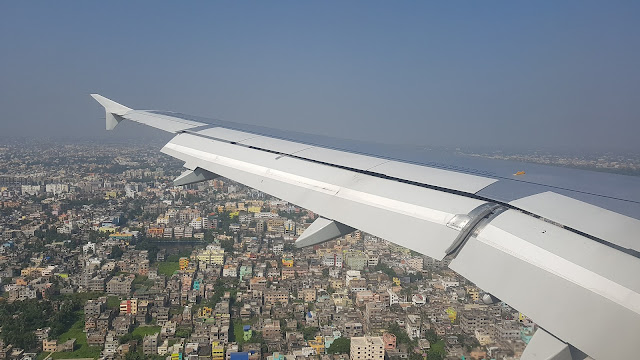 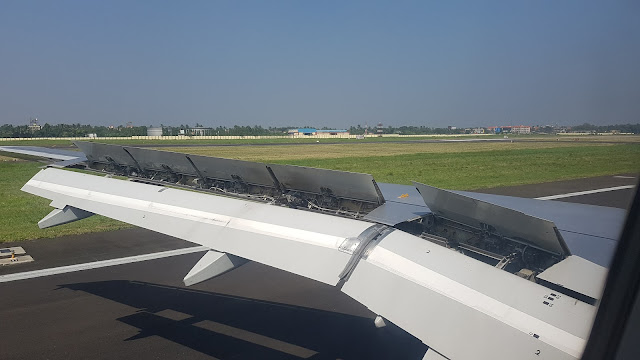 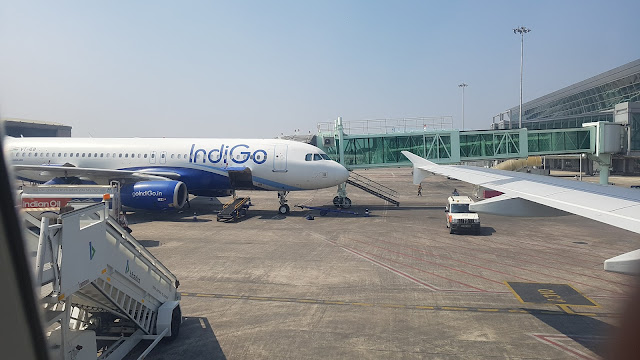 All in all I had a very good experience with Drukair, they were great and definitely worth what I spent for my ticket. The service was polite, aircraft was in good condition and meals were satisfying. Good work Drukair! 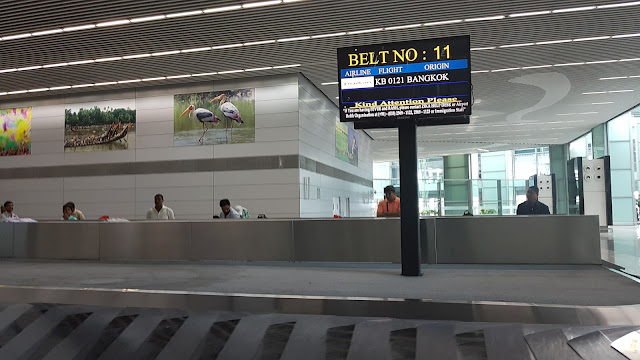