Singapore to Bangkok – in video!

After a pleasant hour and a bit in the SATS Lounge terminal 2 sipping vodka and orange juice, it was time to head for Bangkok. SQ978 is the last Singapore Airlines flight of the day to Bangkok, now that they have cancelled the Singapore-Bangkok-Tokyo run (so sad!). Currently, Singapore Airlines operate only 4 services a day, and all Boeing 777-200’s, on the Bangkok run. This is a huge reduction from the previous schedule which included at least 6 flights a day, some of which were 777-300’s, and in the past Boeing 747’s also.  There also used to be First Class, now there is only Business and Economy, so SQ service to Bangkok is just a shadow of its former self. I hope to see increased frequencies return to Bangkok in the future, it should happen as long as the country can remain reasonably stable (with no airport closures!).

We departed the gate about 15 minutes late with a load of I would guess of about 75% in economy, just after a storm cell passed over the airport. The weather for taxi out and takeoff was light wind and very light rain. Daylight was rapidly fading as we made our way to Runway 20C for departure to the north. The takeoff run was extremely quick, one of the fastest I think I have experienced in a Boeing 777, even on a short sector. See for yourself in the video! 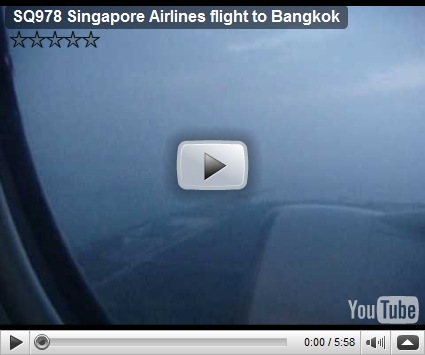 Despite the large number of storm cells in the vicinity of Singapore we had a nice smooth climb out to cruise altitude, and the dinner service commenced. Singapore Airlines recently dropped the ‘appetiser/salad’ component of the catering to Bangkok, yet another cost cutting measure and another step closer (albeit a very tiny one) towards Low Cost Carrier type service! I hate seeing services cut, particularly on SQ who pride themselves as being a ‘5 star airline’. Also, the cart does not contain anything other than beer,wine and soft drinks, meaning its difficult to get a famous ‘Singapore Sling’ with the crew working hard to get the meals out in time. Tonight's offerings included curry fish on rice, and pork with potato, fairly typical catering for this sector. I took the pork option, which was surprisingly tasty! You can see it in the video… the rest of the tray consisted of the usual bread roll (in a plastic wrapper), and dessert was a small tub of cheap looking chocolate ice cream.

By the time the trays were collected we were well into the gulf of Thailand and the familiar sight of what seems like a million fishing boats. Surely they must be almost running out of fish in the gulf of Thailand! I often wonder what it would be like looking up from the fishing boat at the passing Singapore 777, what a contrast in lifestyles! 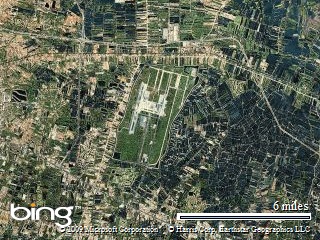 We headed up the eastern seaboard of Thailand and commenced our descent for a smooth approach onto Runway 19R in Bangkok, my second home! It had been 8 weeks since I was last here and I was glad to be back. We parked at gate D1, conveniently right near to Immigration which was almost totally deserted, took 1 minute to get through, then a few minutes waiting for the bags. Thankfully the priority tags had done their job well and bags were one of the first ones through. Out the door and into a public taxi for the ride home! Next destination is Krabi via Air Asia in a couple of days. 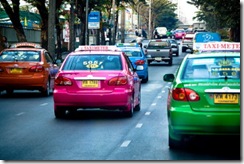