- December 31, 2010
After arriving at the mammoth American Airlines hub of Dallas Ft-Worth I had a bit of time to spare before my next flight to St Louis. The airside train took me to the C gates for my next flight.
DFW actually had free internet terminals scattered around which I used while waiting which was handy. Soon enough it was time for boarding: 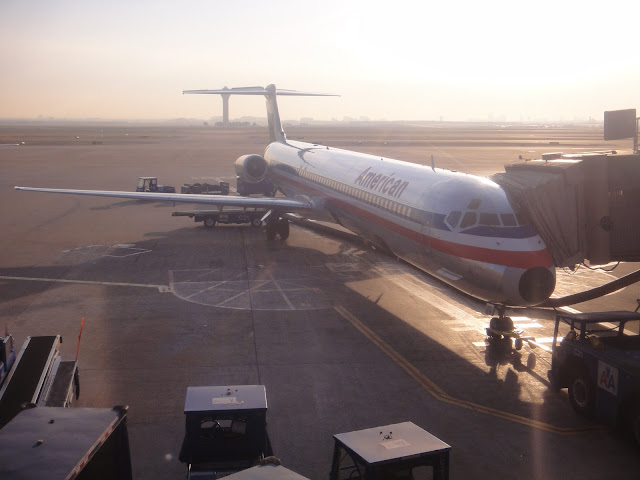 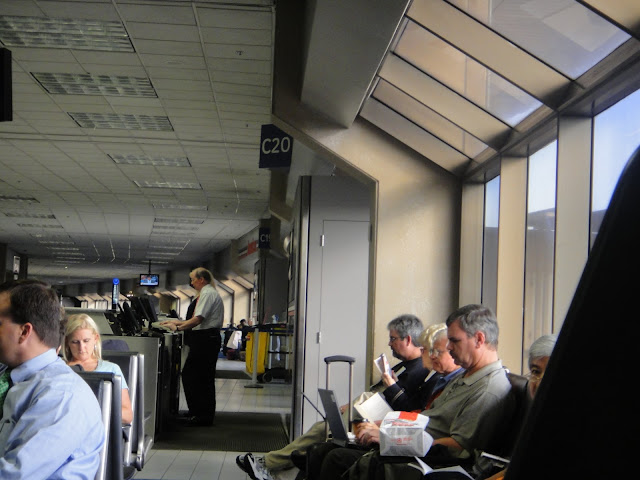 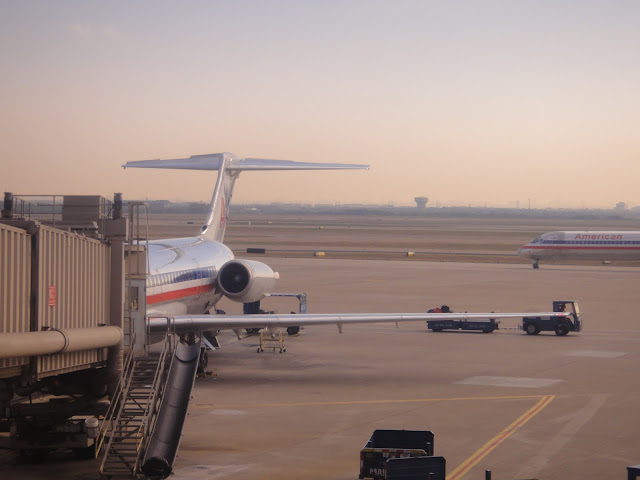 Another view of my ride - one of dozens of MD80s on the ground here
Boarding was called and First Class passengers were advised to board first. I was off on my first ever MD80 ride! 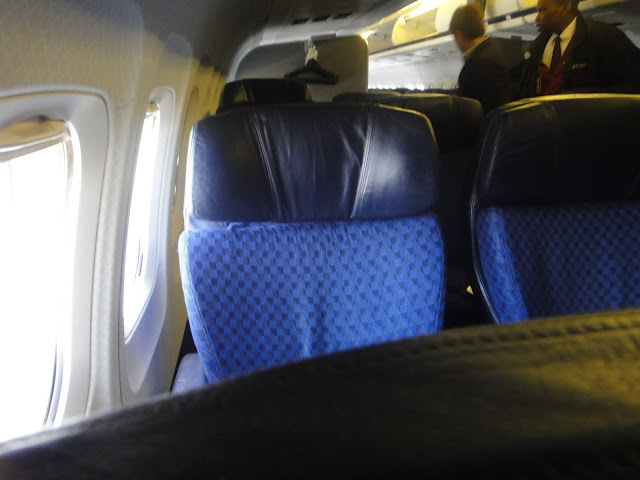 looking back at the domestic First Class seats
Seating on the AA MD80's is in 2x2 for First Class and 2x3 for economy class. The seat is quite comfortable although seat pitch is bad and as is standard on the MD80s and 737s, there is no leg or foot rests. Fortunately I was on the right hand side bulkhead which has the most legroom by far! I recommend this seat if you can get it: 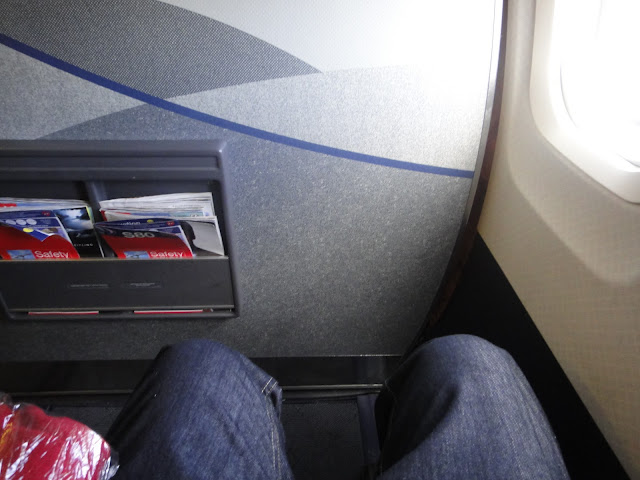 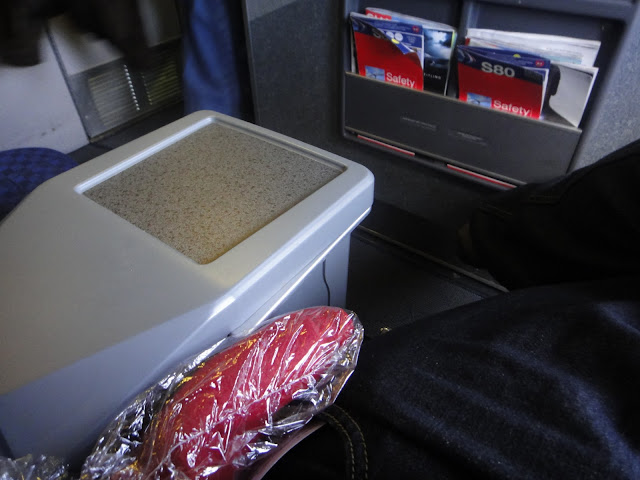 Blankets are provided in every seat - even on these short hops 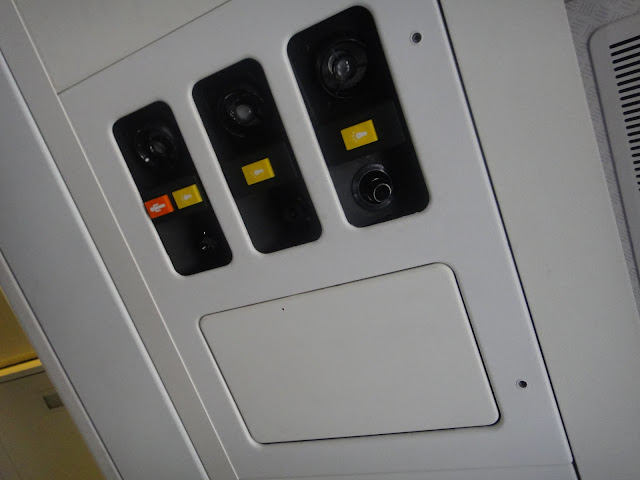 1980s Overhead controls
The flight was quite full but we pushed back on schedule and made our way to one of the many runways at Dallas Fort Worth. The great thing about the MD80 with it's rear mounted engines is how quiet it is! Especially from the first row! You barely hear the engine start and during taxi it's almost silent. Even at takeoff power its just a faint hum in the background. Once airborne the wind noise is all you hear. 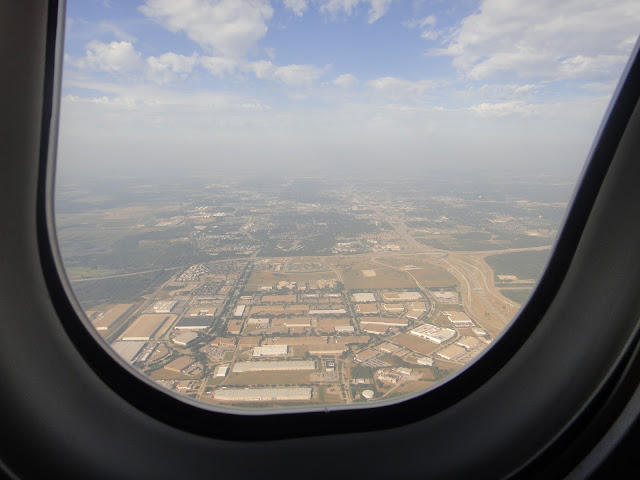 Climbing out of DFW
This flight was at a non-meal time and was quite short (about 90 mins gate to gate) so only a 'refreshment' type service was provided. I didn't feel like any alcohol so I settled with an apple juice and packet of snack mix: 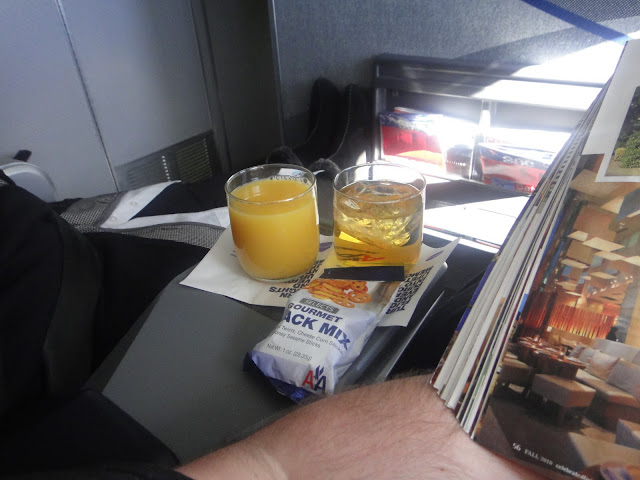 With no inflight entertainment what so ever on the MD80 I just read the inflight magazine and watched the scenery go by. Seconds were offered on the drinks  from our St Louis based flight attendants. A trip to the forward lavatory was in order during the flight, and it was quite easy to leave my seat without disturbing my seat mate from the bulkhead row. 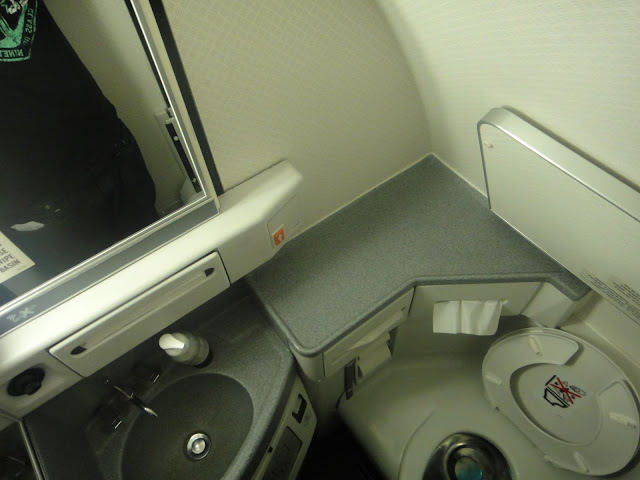 MD80 forward lavatory
It wasn't long before we were on descent into St Louis, and from my seat I had a great view of this small city.﻿ 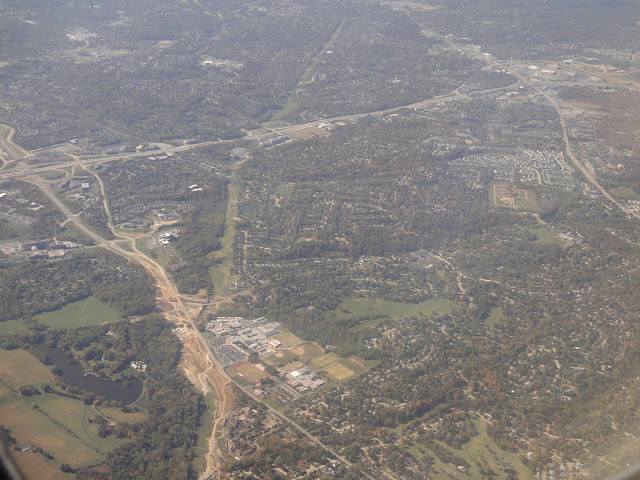 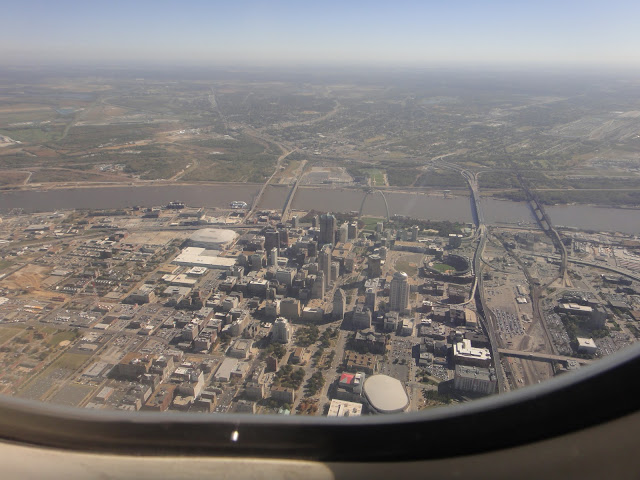 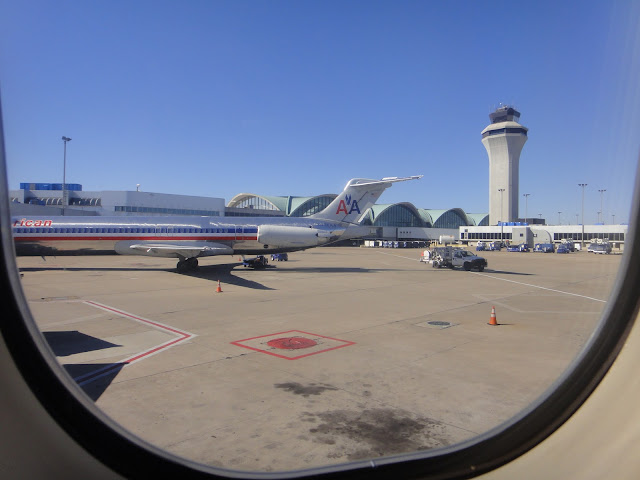 Arriving at the gate next to a company MD80 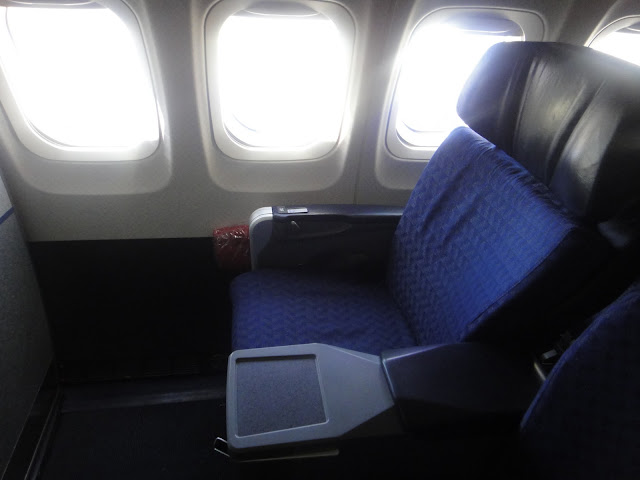 my bulkhead seat as we disembarked, good legroom here and lots of windows!
The pleasant crew thanked us for flying with American Airlines and we were soon off the aircraft and into the terminal, I had a little over an hour before my next leg to Chicago O'hare, time for lunch! 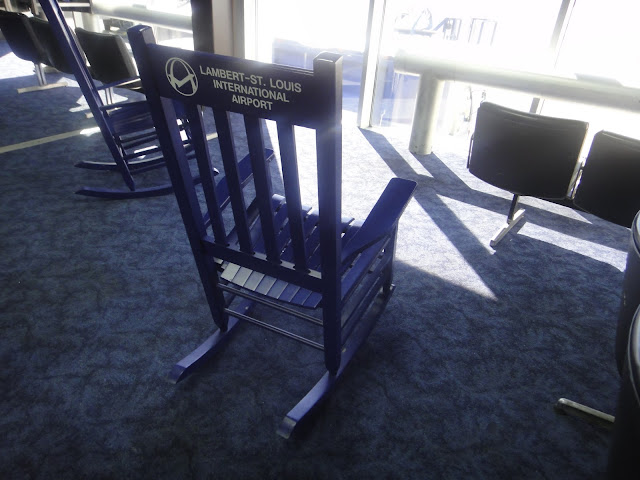 St Louis airport even features rocking chairs - something I had never seen in an airport before!
St Louis' Lambert International airport is the former hub of Trans World Airlines (TWA) so it is a massive airport. But since TWA was merged into American Airlines, American have significantly reduced the operations in and out of this city. As a result many gates are empty and I believe some concourses are completely shut down making for an eery feeling as you walk through this former hub airport.﻿

I went for a walk around - there wasn't all that much happening. Southwest seemed to be the other major operator at STL. I spotted this all white Skywest CRJ-200 parked at a gate nearby: 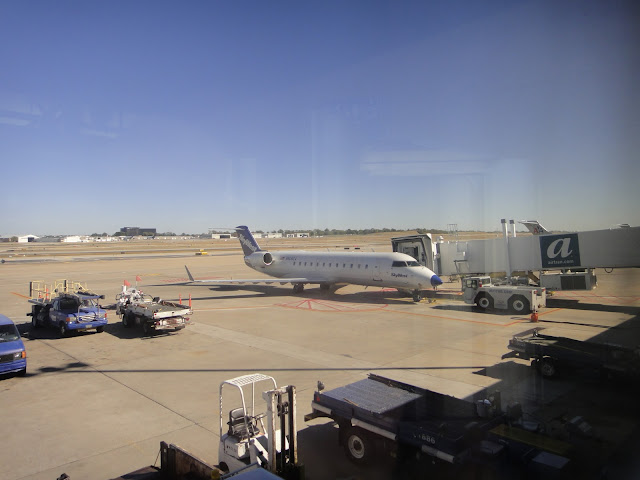 After a chicken caesar salad lunch from Wolfgang Puck it was time to board another American MD-80 for the very short 40 minute sector to Chicago's Ohare airport. This time I was in the third row, right hand side window. A special hint to those flying MD-80's in First, the right hand side seats have more leg room. 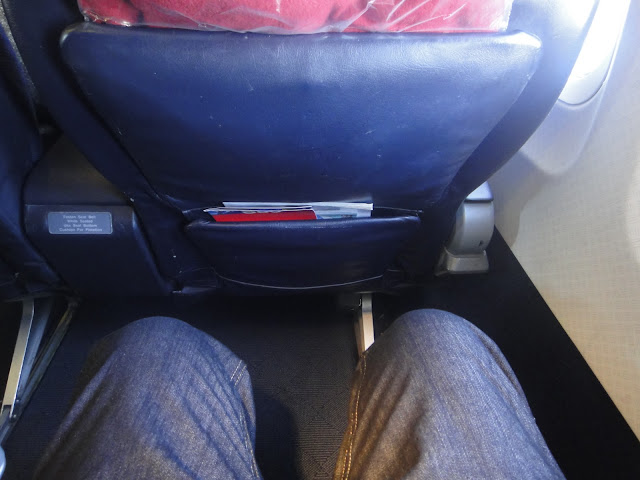 Seat Pitch - a little tight but ok
While I was seated I noticed the aircraft that had brought me from Dallas was pushing back from the gate beside me: 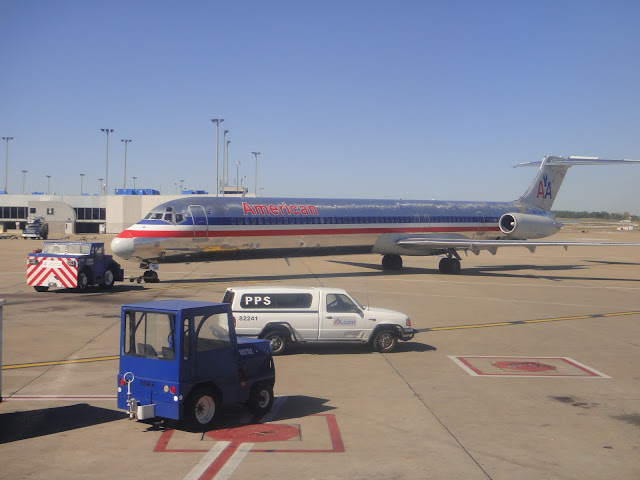 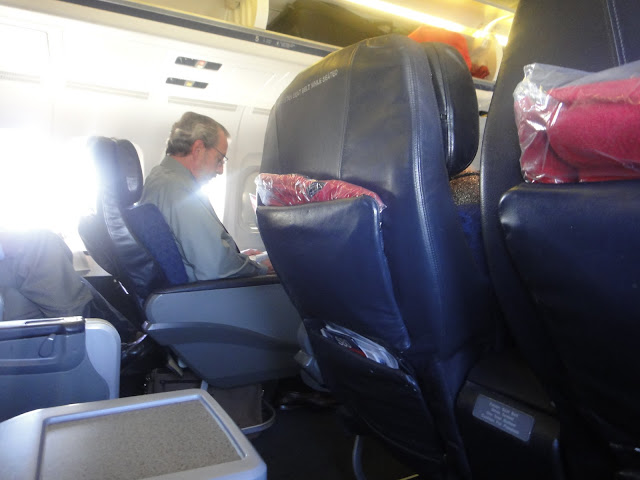 Looking across the aircraft, the left side seats have less seat pitch due to a storage cupboard

We were welcomed aboard by our Chicago based cabin crew, I was fortunate enough to have the seat beside me vacant for this leg. A few minutes later we powered down the runway and soared into the Missouri sky. 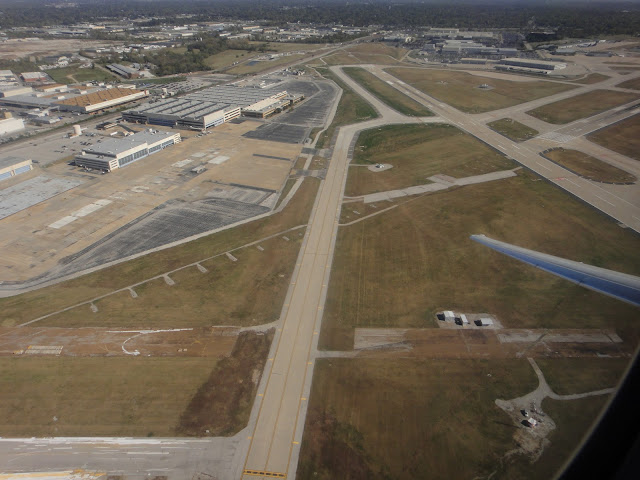 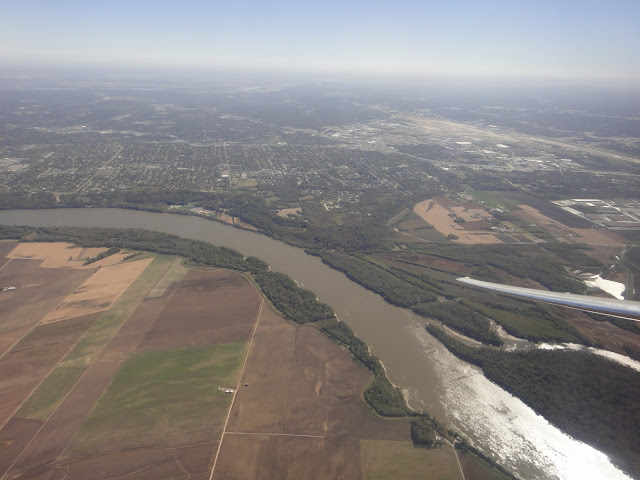 ﻿
This sector was only a little over 40 minutes, so a refreshment was all that was on offer. I settled with a can of coke. I was looking forward to arriving at one of the worlds busiest airports, Chicago O'hare.

We flew over the city of Chicago before making a u-turn over Lake Michigan. As we crossed the lakes coastline I was really impressed with the view: 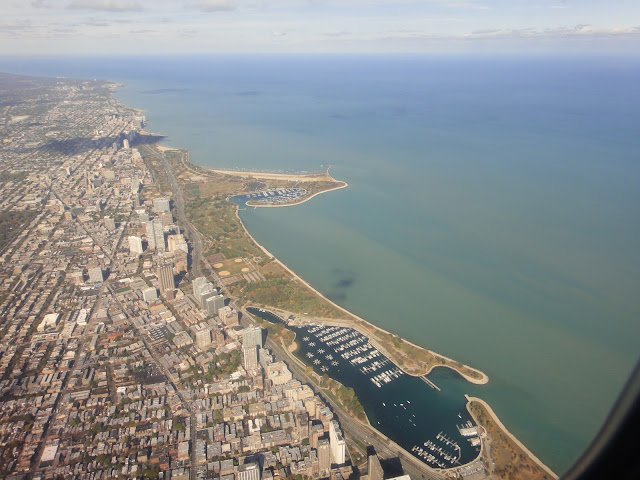 It was quite windy during the approach with quite a bit of turbulence. We were conducting a parallel approach with this regional jet off to our right: 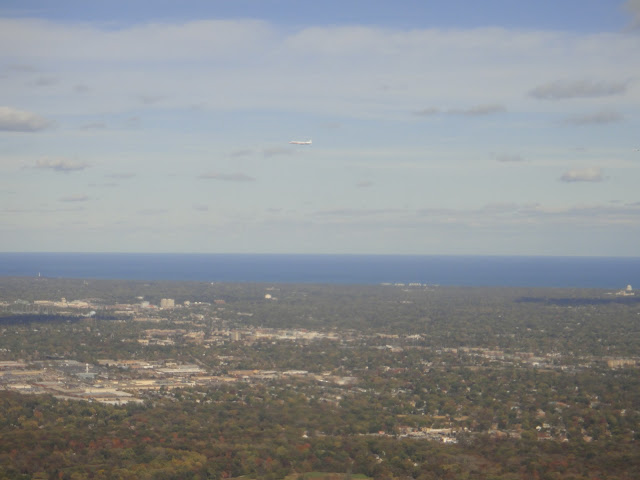 American have a large hub at O'hare and you will see loads of AA tails as you arrive at the terminal area. United is the other major carrier here. 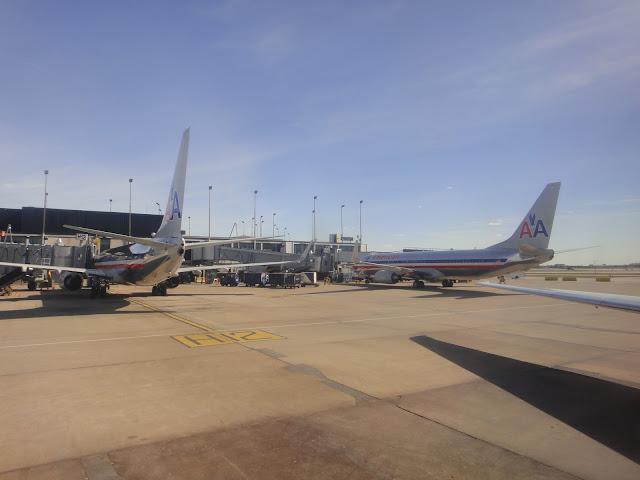 Can't really complain about the service on a flight like this, there is not exactly a lot that can be done in 40 mins. It was pleasant enough and I had enjoyed flying on the MD80. Although it's an old aircraft they still do their job quite nicely on these short flights. The first class seat's arent exactly fabulous but it's definitely a big step up from economy class. 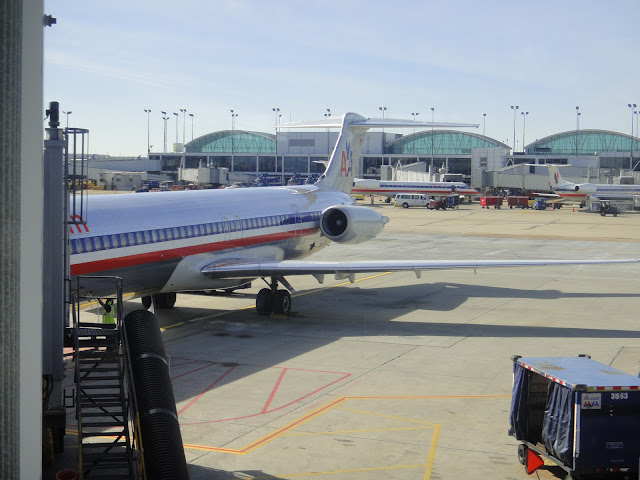 my aircraft takes a short rest before it's next domestic sector
﻿
Thankfully, my luggage came out quickly with it's priority tags and then it was off to the airport train station to grab a train to the city: 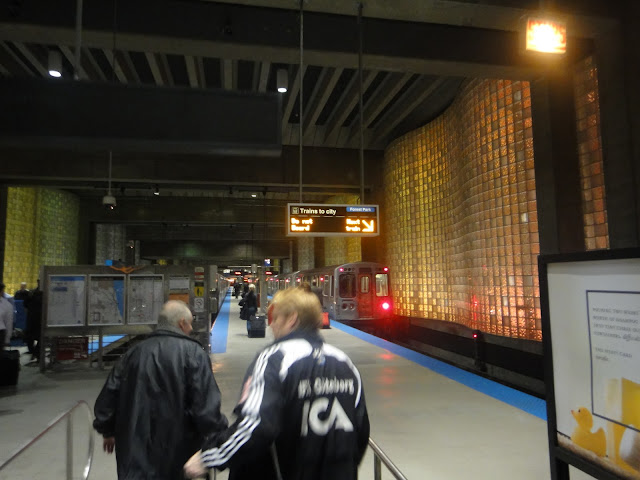 Next up in this trip report is my short stay in Chicago!
American Airlines First Class MD80 trip report