- January 07, 2011
Firstly, I apologise that this part has no inflight pictures as my camera battery ran out. My mistake! Anyways, on with the story....
Having just landed at JFK from Chicago I decided to go for a wander in the general direction of the next flight, checking out some of the retail outlets along the way. 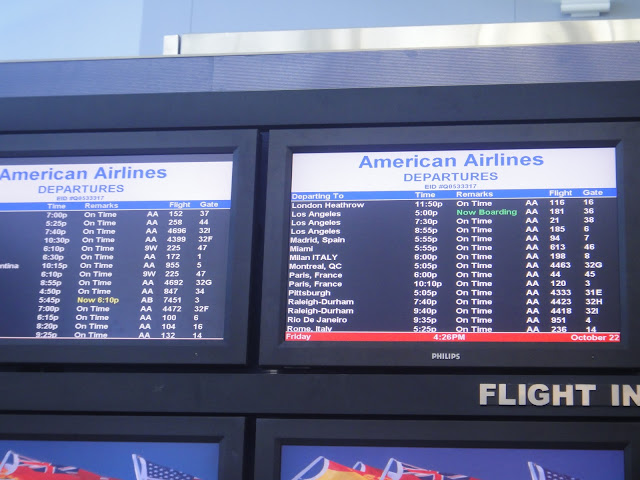 Flight Information Display - AA613 to Miami is on time
Halfway across the terminal I suddenly realised I had left my Sony noise cancelling headsets sitting between my seat and the side of the 757 I had just come in on! I decided to race back to the gate and see if they could be retrieved. As I arrived I noticed one of the ground staff was closing the airbridge door and about to leave. I approached him and explained what had happened and even though everything was locked up and he was going to his next flight he very kindly opened the door and escorted me back onto the aircraft. The cleaning crew were halfway through their job as I got back on board the 757. I asked the staff member cleaning the first class cabin if he had seen my headset. I was relieved when he quickly presented them to me in a plastic bag! Phew! What a relief... I was then escorted back into the terminal area! Thanks so much to the kind American Airlines staff for helping me out. 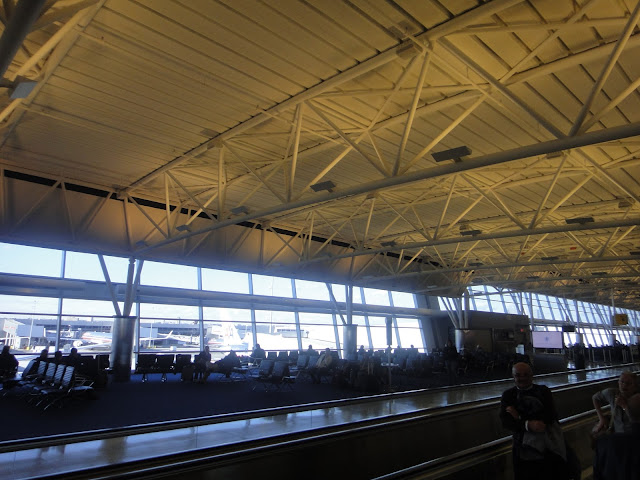 American Airlines Terminal @ JFK
With my headset safely tucked away in my bag I headed for gate 46 to check out my ride to Miami, a Boeing 767-300ER. Today's flight was being operated by N379AA, which was delivered new to American in March 1993 making her about 17.5 years old. 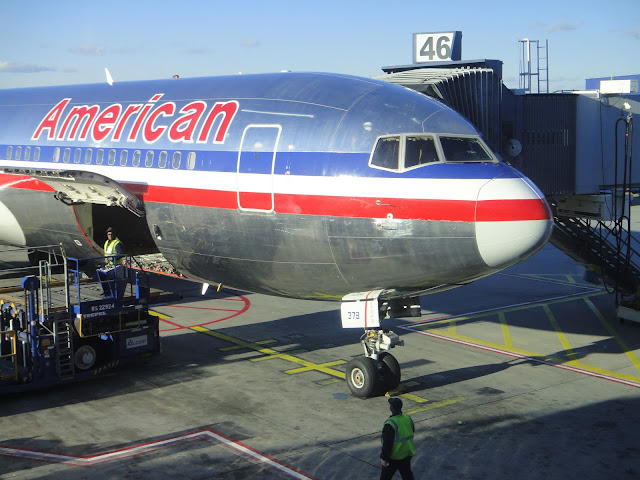 American Airlines B767-300ER N379AA awaiting a trip to Miami
The flight left 45 minutes late, I am not sure what the reason for the delay was. By the time we departed the sun had set and we took off out over the Atlantic Ocean and headed south. The captain made an announcement soon after departure giving us some route info, and pointing out Atlantic City which I had a good view from my right hand side window.
The seating configuration is the same as I reviewed on an earlier flight from Hawaii to Dallas, available on this blog. They are angled lie flats and very comfortable.
Soon after takeoff the usual warm nuts and drinks were on offer. This was a dinner service and after the nuts I opted for the chicken dish which was quite tasty. It was basically just a piece of chicken breast with some kind of sauce with a side of green beans and I think potato. Fresh cookies were offered before landing. I managed a bit of a nap during the flight and chose not to bother watching the overhead entertainment.
After landing I collected my bags and made my way to the Hilton Miami Airport shuttle bus. Tonight I would stay at the Hilton before a morning flight to Barbados the next day. I can't offer much of an opinion about Hilton as I arrived quite late so did not get a chance to explore the pool facilities. The room was quite ok though, very spacious and had a nice LCD tv. They have some very good deals so it's a good option for those in transit as it's just a few minutes on the courtesy shuttle to and from the terminal. 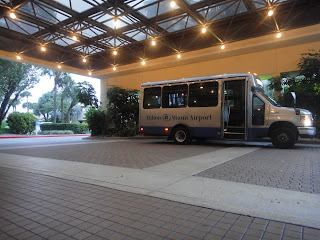