- January 09, 2011
After a 7am wakeup at the Miami Airport Hilton I checked out and hopped on the shuttle to the terminal. It was just me for this shuttle with no other passengers. The young driver enjoyed telling me about his recent successes with the ladies in Miami bars over recent days. Apparently he does quite well for himself! I wasn't sure whether you tip the shuttle guy so I did anyway since he was quite entertaining.
At the terminal I headed for the business class check-in counter: 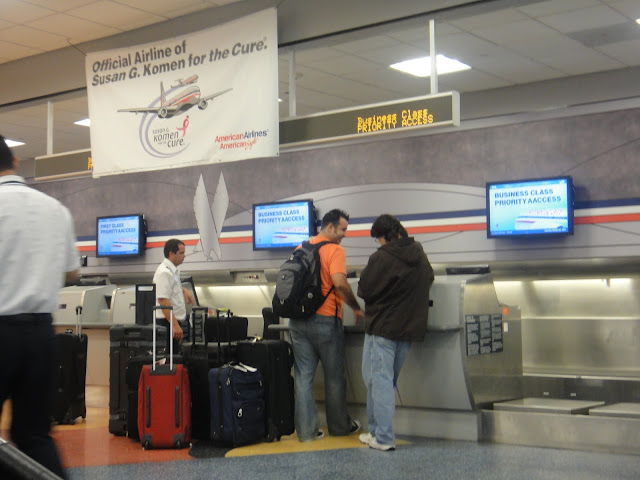 Check-in formalities aside it was time for some breakfast. 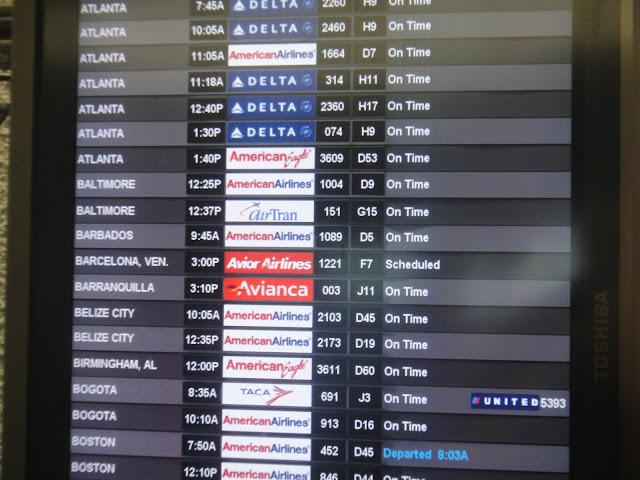 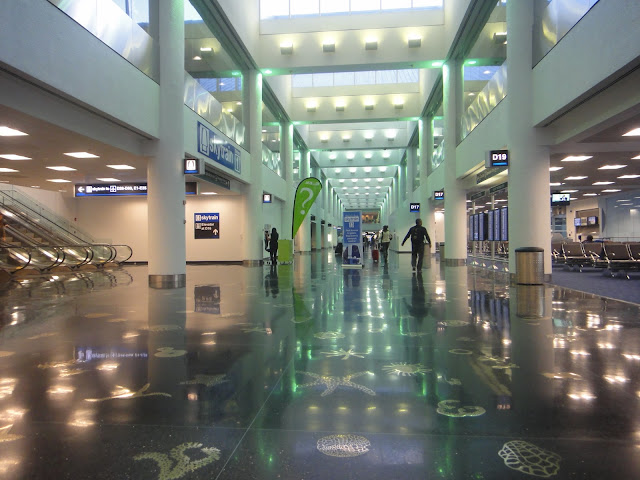 Miami Airport D Concourse
The friendly check-in girl had recommended I try the cuban bakery for some coffee and pastries. I went there and was not disappointed! Apparently plenty of other people had the same idea as the queue was pretty long!

Cuban coffee in hand I headed for a nice window seat to watch the goings on. American Airlines clearly the dominant carrier in Miami with dozens of silver tails everywhere. 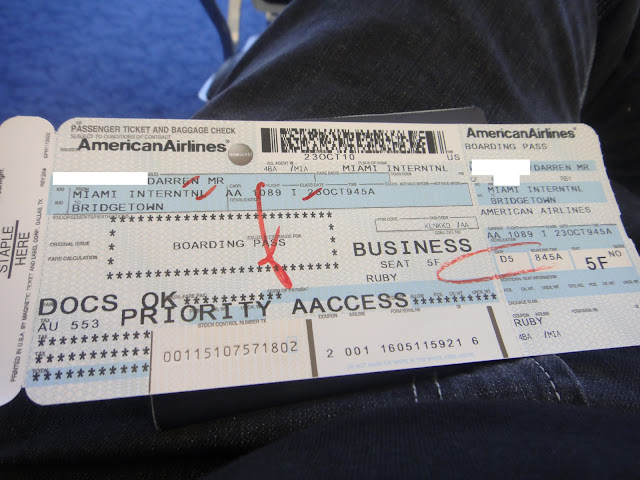 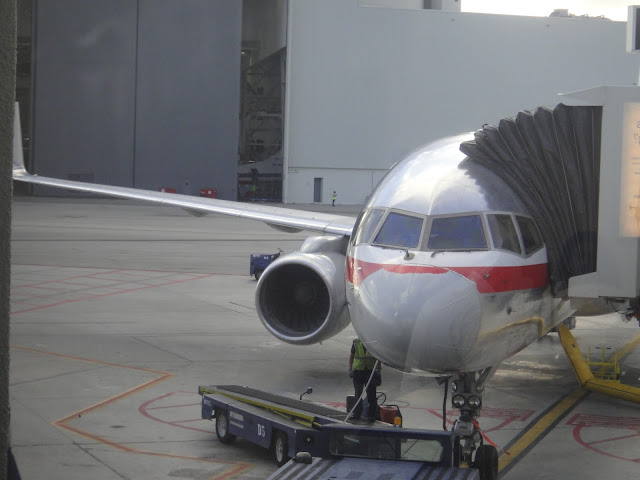 My Boeing 757-200W ride to Barbados
Boarding was called and it was time to get on board my Boeing 757-200 (Winglets). This was my first time flying on an American 757 in the old domestic configuration. These seats are called 'First Class' on domestic flights, and 'Business Class' on international sectors. They are certainly showing their age and desperately need replacing! 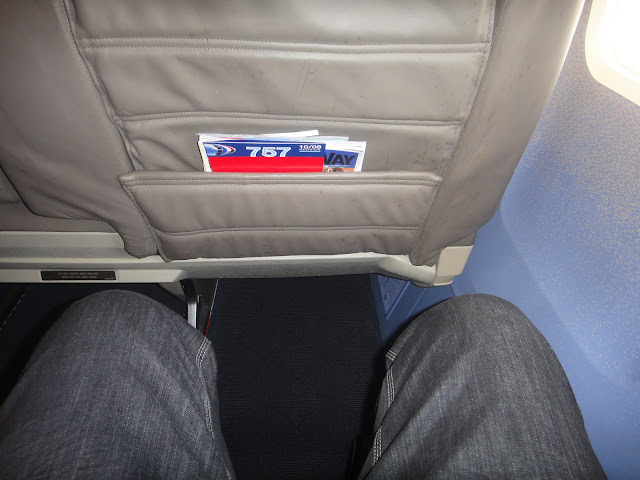 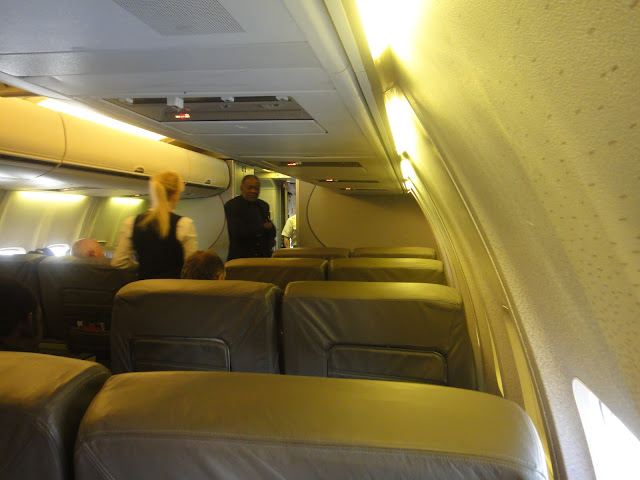 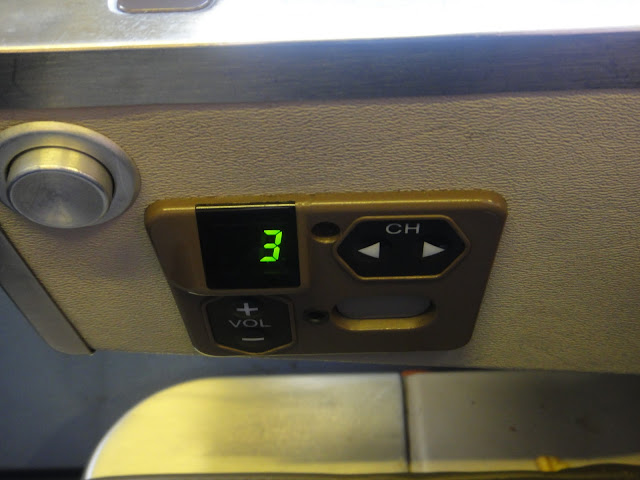 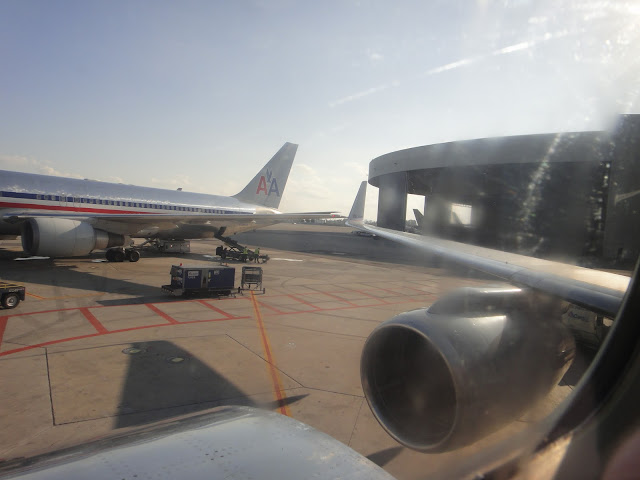 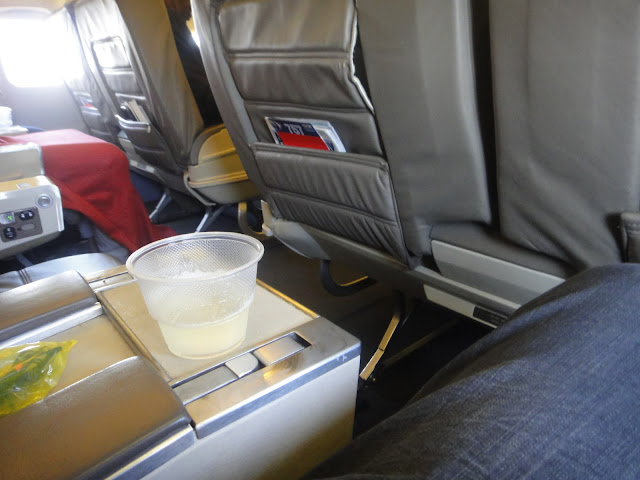 Welcome Drink - sparkling wine in a plastic cup
Today's flight was almost full in business class with just one spare seat. Several of the passengers were Barbados residents, the remainder sounded American, along with one Aussie, myself! Fortunately the seat beside me remained vacant which was helpful as seat pitch is pretty ordinary and it would be difficult to climb out from the window seat without disturbing the passenger beside you.

During boarding headsets and welcome drinks were passed out. The headsets were cheap in-ear style plastic things and the welcome drink came in a plastic cup which is normal for AA, although I think it's really tacky! At least they had sparkling wine (not Champagne) available on the tray.

We pushed back and made our way to the runway with the 757's powerful engines giving us a quick takeoff run and steep initial climb. Apologies for the pics out the window looking blurry, it's because the window was rather dirty! 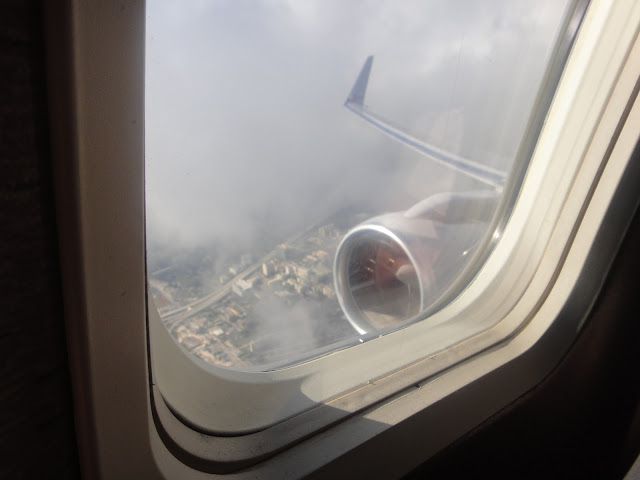 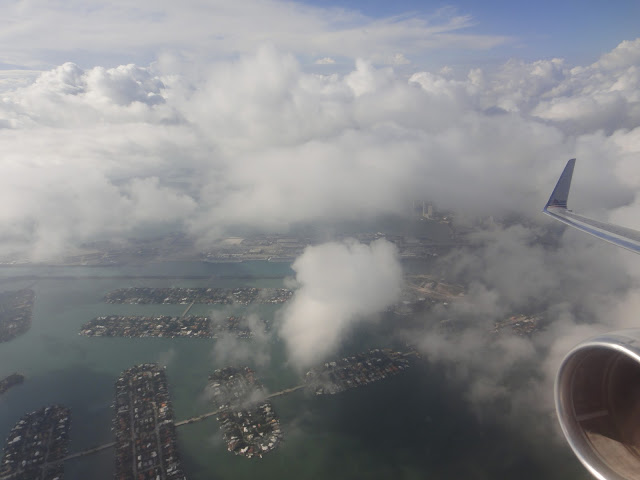 Interesting islands off Miami, no doubt expensive houses there! 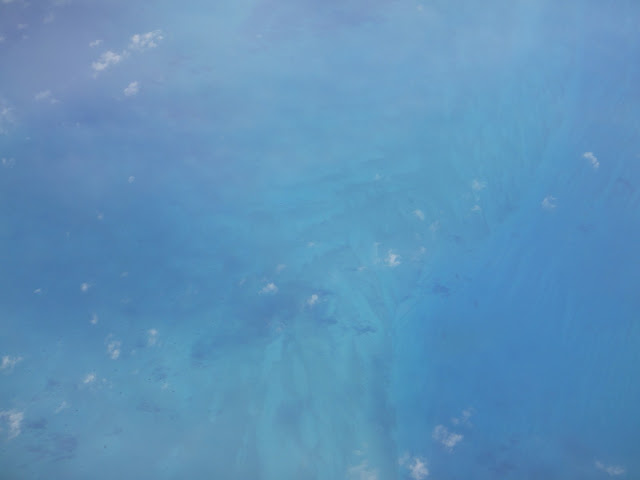 Caribbean Blue Sea
There was quite a bit of turbulence in the first 30 minutes of the flight, caused by  lots of cloud. The captain delayed turning off the seatbelt sign until well into the cruise. Once it was off though, the crew spring into action and delivered hot nuts and drinks. I took a coke: 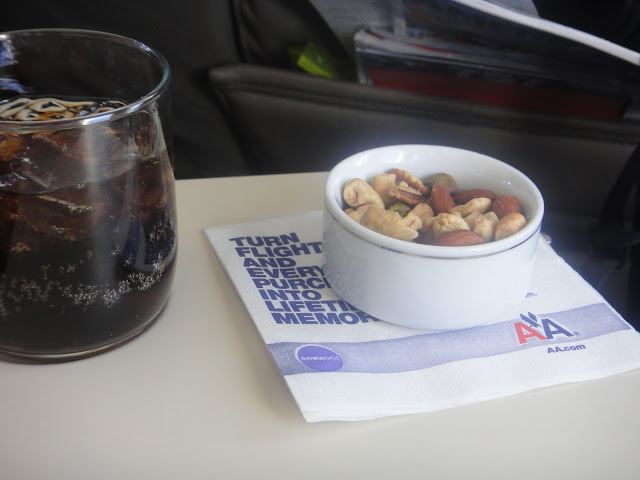 Nuts & Cola
The lunchchoices were identical to those on offer the previous night between New York and Miami (chicken or pasta). For a bit of variety I took the vegetarian option which was pasta: 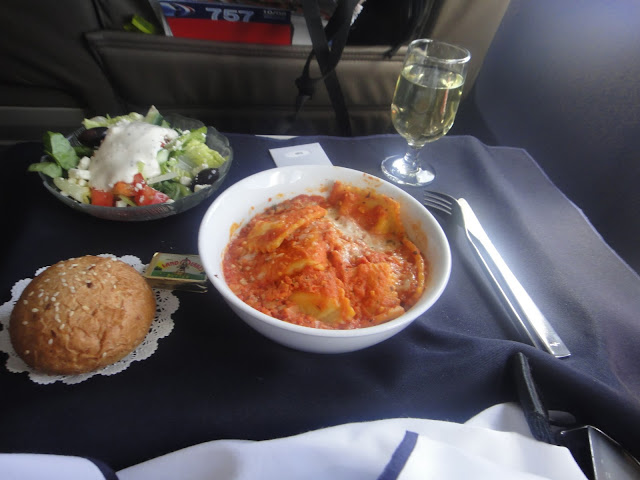 Lunch
Lunch was actually quite tasty although it wasn't much to look at. I drank the sauvignon blanc which I had tried on the previous flights and was quite good. Don't ask me what the label was, I have no idea! 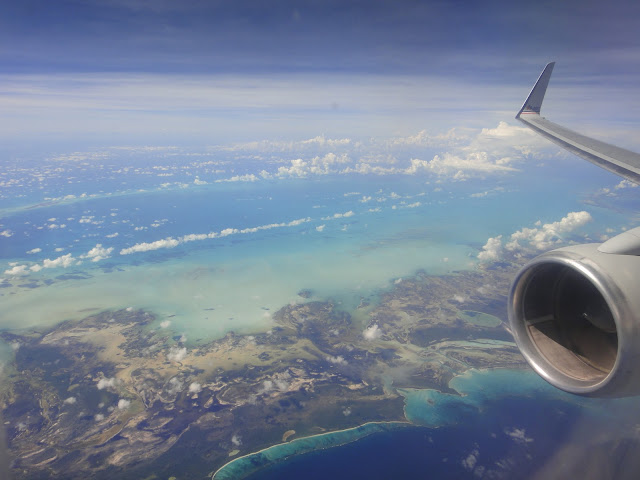 Enroute over a Caribbean island
During the flight the overhead screens played a movie that I had already seen so I took the chance to have a short nap. At some point fresh baked cookies were given out. 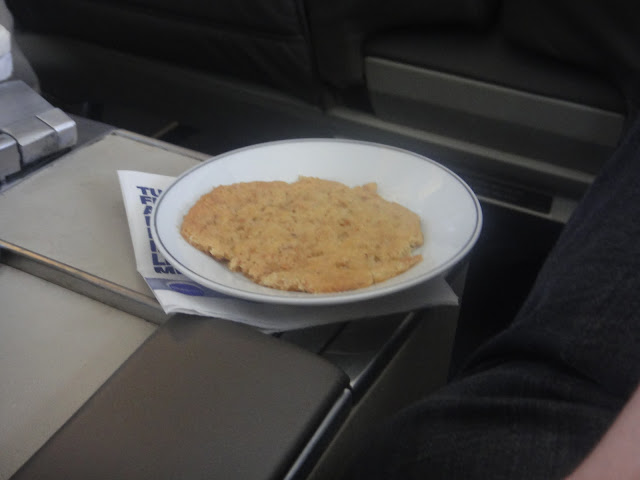 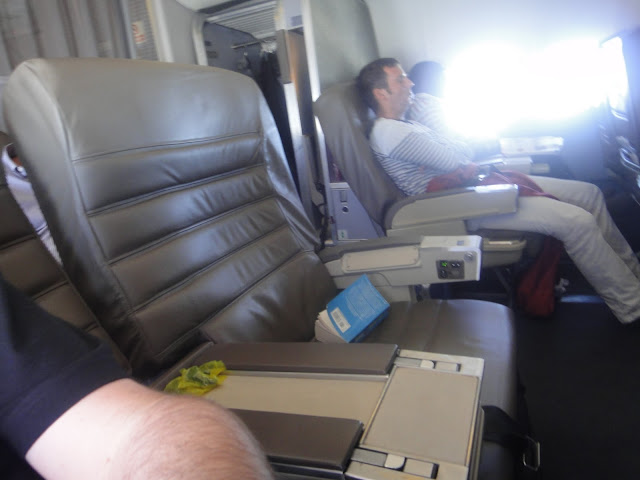 Around 3 hours after taking off we began the descent into Barbados, I was finally about to reach my destination after 9 flights and about 4 days of constant travel. 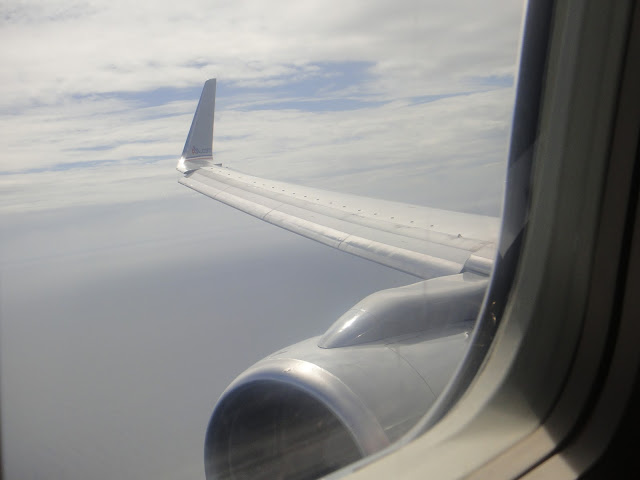 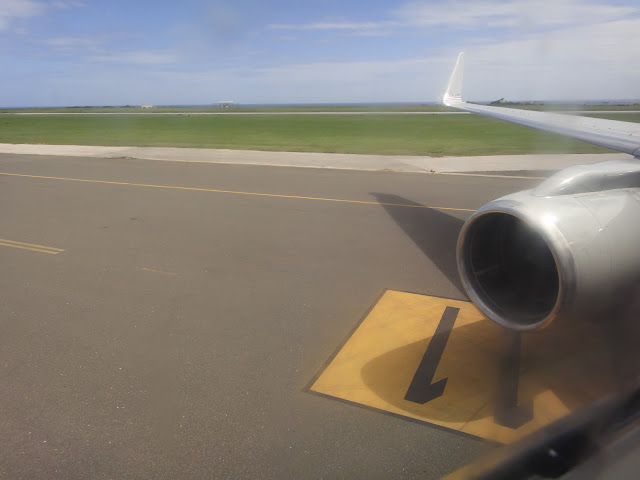 Taxi in to the ramp 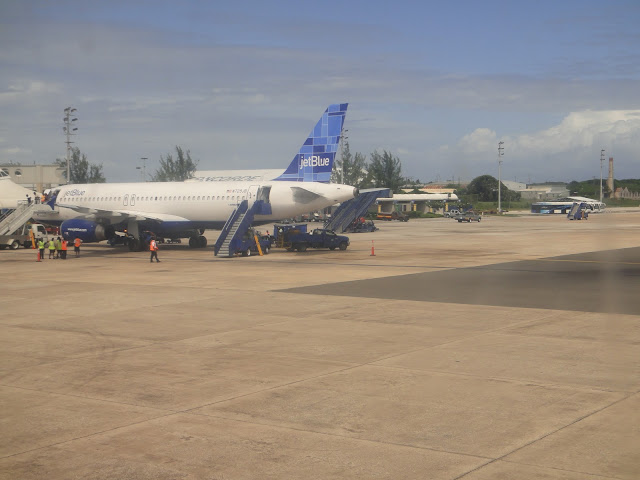 Approaching the ramp beside jetBlue A320 from New York 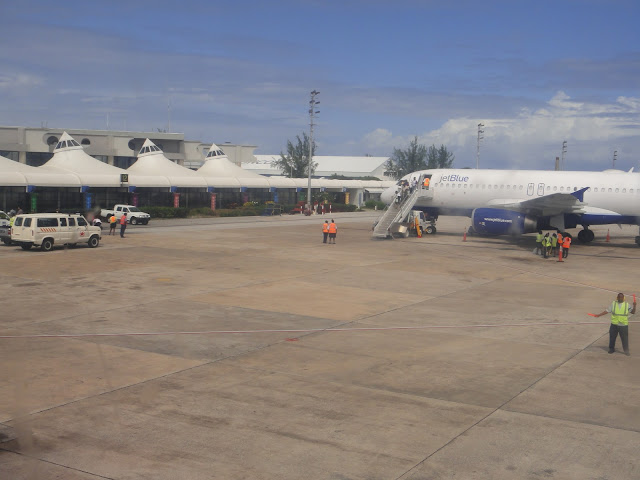 It was a beautiful day in Barbados with blue skies and a few scattered clouds. 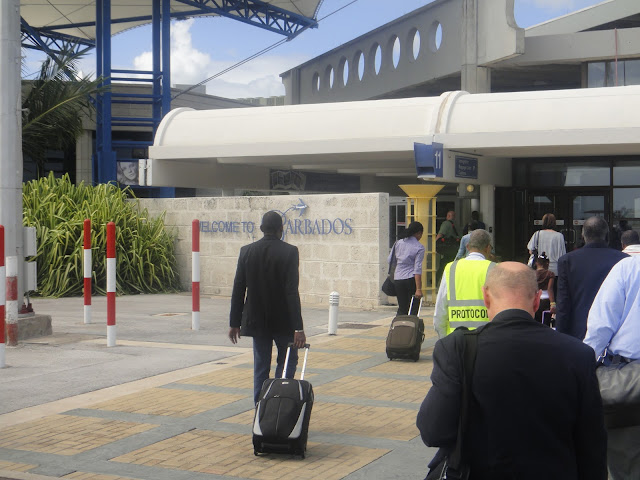 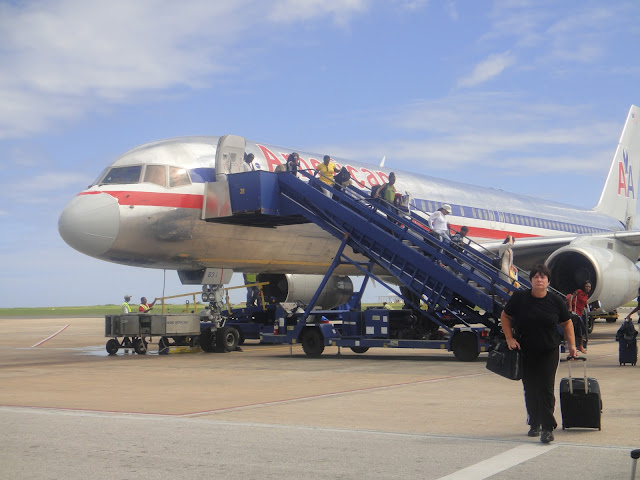 The 757 looks really big when you stand beside it!
It was time to relax for a couple of days of fun in the sun. But before I could, customs decided I was a bit suspect. I was quizzed quite a bit about why I was only here for 2 days. I explained the whole status run concept and she smiled and welcomed me to Barbados. As I cleared customs I noticed a woman holding up the Hilton Barbados sign. She had my name on a sheet and escorted me to a taxi to bring me to the Hilton.

Next up, my stay in Barbados!