- March 10, 2011
After talking about going to the Australian red centre for so long, I finally decided it was time to do it in January. I decided to fly into Alice Springs and check out that town and driving a rental car the 400 km to Ayers Rock/Uluru. There is only two airlines flying to Alice Springs: Qantas and Tiger Airways. Today I would be using the services of Qantas and flying via Sydney. There is a direct flight, but for an aviation/flight geek with time to spare like myself - travelling via Sydney would be far more fun!
First flight of the day is on VH-OGI, A Boeing 767-300ER delivered new to Qantas way back in 1991. That makes the aircraft just short of 20 years old. It has operated for the Qantas group for it's entire life, with a brief stint flying for Australian Airlines (Qantas subsidiary) in 2002 before returning to the Qantas mainline fleet.
After a latte and snack in the lounge, boarding was called for QF414 to Sydney, the 8am service. I was in 2H, an aisle seat, and completely surrounded by business folk as you would expect on a weekday service on this route at this time. Business class was full and soon after takeoff a choice of breakfast was offered. i took the hot option which was sausage and eggs with beans. I had a sparkling Australian wine to go with it. There was also a bowl of yoghurt on the tray and a bread basket was offered shortly afterwards. 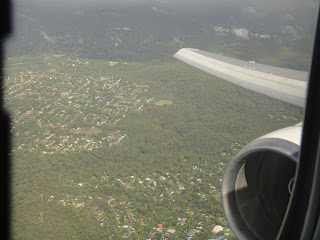 As is usual the morning news was shown on the over entertainment system, still no individual screens on most of the Qantas domestic fleet at this stage.

Flight time was just 65 minutes so by the time breakfast was complete we were on descent into Sydney. We flew to the north of the airport before making a few right hand turns and approach onto Runway 16R. The service on this sector was professional and pleasant and just as I would expect from Qantas. 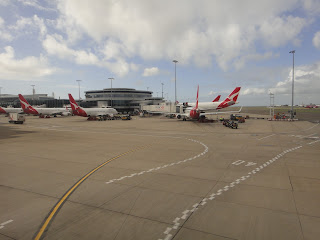 We taxi'ed over to the gate a couple of minutes ahead of schedule. The next flight to Alice Springs was departing in just 30 minutes, but it was long enough to pop into the business lounge and have another latte!

﻿﻿
﻿﻿
Just as I was finishing my drink in the lounge the announcement for QF790 was made, and I headed off to Gate 7. Parked at the gate was VH-VXO, an 8 year old Boeing 737-800 with the special paint scheme 'Sharing The Spirit'. The queue was still quite long, and there was no priority queue for business class so I took a few photos before boarding. 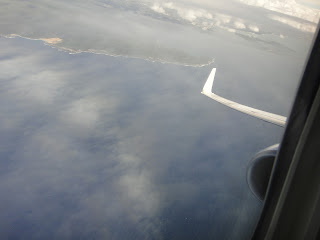 I was seated in 1D, an aisle bulkhead seat. Once on board a glass of apple juice was offered along with newspapers. The crew announced a flying time of a just under 3 hours. Todays flight would be a lunch service and a movie (Wall Street: Money Never Sleeps) would be showing on the overhead entertainment screens.

After boarding was completed we made our way to the runway and took off to the south, heading off the coast bedore making a right hand turn and heading west. Alice Springs - here we come!

Service commenced with drinks and a packet of roasted almonds and cashews. I drank the sauvignon blanc. Shortly after the snack service lunch commenced. There was a choice of 2 mains, I took the Thai curry which was served with rice and vegetables and a small bowl of salad. The bread basket was brought around a couple of times during the meal. I was disappointed that there was no dessert on offer. The meal overall was fairly small and uninteresting. I would expect more on a 3 hour flight in business class. The main course tasted fine though. 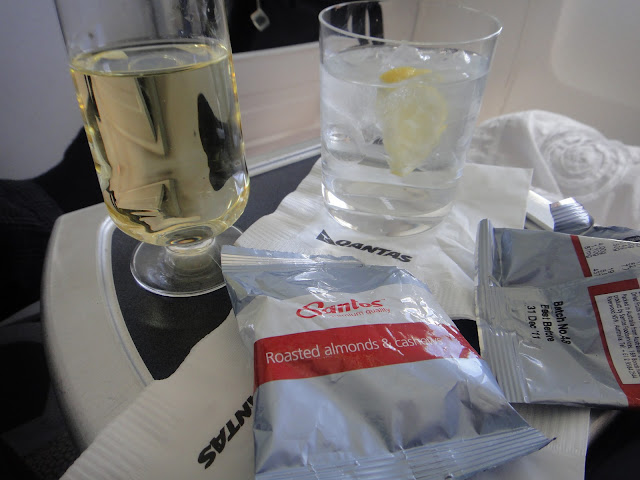 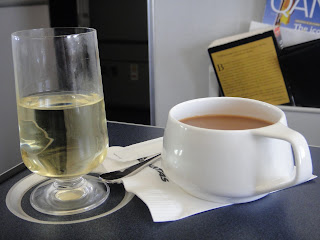 After the lunch trays were collected a tea and coffee run was made. There was no shortage of drink top ups at least for the remainder of the flight, and I asked for more nuts which was not a problem.

By the time lunch was over the ground outside had started turning orange, we were already over the dessert and the views were really nice. 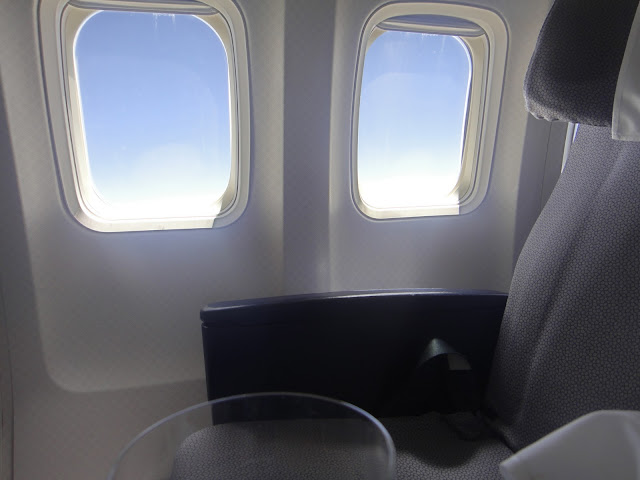 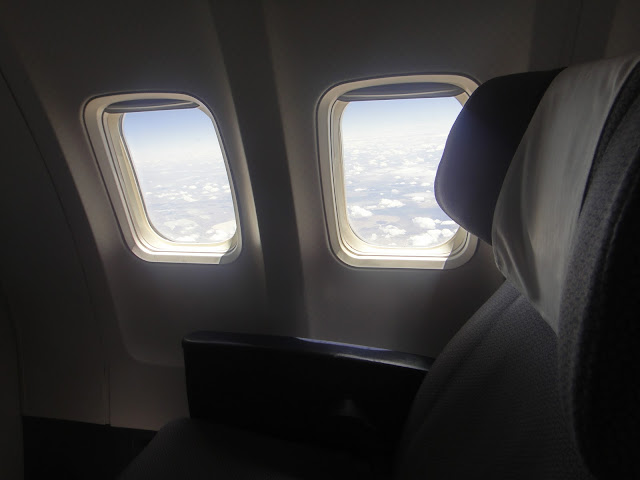 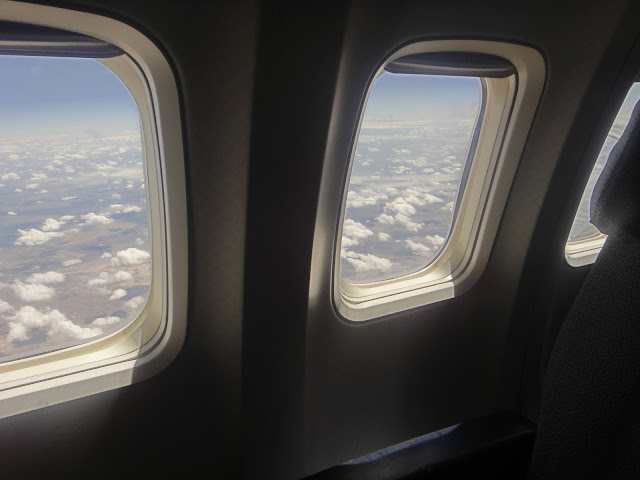 After about 2 and a half hours the captain announced our descent into Alice Springs and we made a few right hand turns before lining up with the runway. I was pretty surprised to see quite a bit of green across the red dessert landscape. Alice Springs and the centre of Australia had been experiencing a period of unusually high rainfall in the preceding months, and it really showed!! 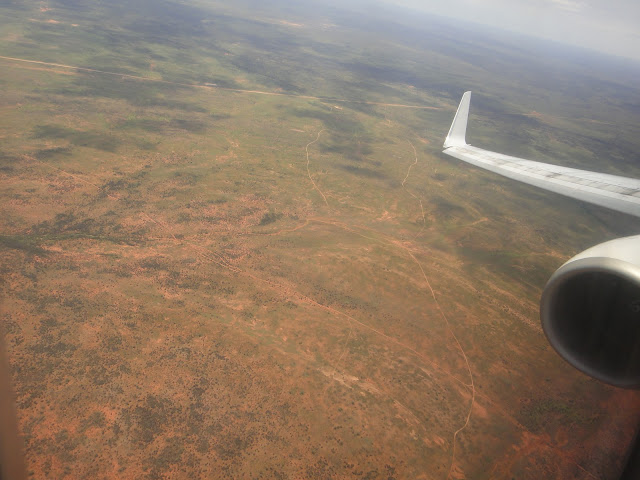 We landed and parked next to another Qantas 737-800 which I believe had arrived from Adelaide. Qantas and Qantaslink operate to most major capital cities from Alice Springs with a mix of Boeing 737 and Boeing 717 aircraft.

It was great to be finally in Alice Springs - the centre of Australia. It has a very different feel to the coastal capital cities and I was keen to explore the town. With no baggage to wait for it was straight over to the Hertz counter to pick up the rental car. Next update I will cover the Crowne Plaza Alice Springs and Alice Springs itself. 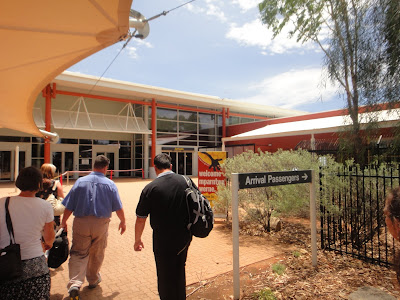