- April 20, 2011
As most of my regular readers know I spend a lot of time in Bangkok. Despite this I had never flown on Bangkok Airways before. I spend more time flying on Thai (due to being a Star Alliance partner) and Air Asia (due to their cheap prices). With a need to travel to Chiang Mai at short notice I checked out the airline web sites and found the best deal was with Bangkok Airways, so I booked online with my credit card and had my itinerary confirmed within minutes for a flight the following morning.
I arrived at the airport bright and early and found the Bangkok Air check-in counters. There was a bit of promotional material around for new services to Mumbai and Dhaka:
The check-in queue for economy had about 20 people in it but it moved along pretty swiftly. It wasn't long before I was handed my boarding pass and made my way through to the domestic flights security and on to the lounge.

﻿﻿﻿
﻿﻿﻿
One of the interesting things about Bangkok Airways (PG) is that they offer a lounge for ALL passengers, regardless of class of travel or status. The lounge is pretty basic but it still provides basic non alcoholic drinks, snacks and free Wi-Fi. There is a seperate lounge for business class and top tier frequent flyers.

I headed for the domestic lounge and presented my boarding pass and was granted entry. For Wi-Fi access you have to show your boarding pass and the lounge staff give you a unique log in code to use with your device.

Once in the lounge I helped myself to a coffee and various pastries that were on offer. It's not much but it beats sitting around in the terminal. Each PG flight is called by the lounge staff so you don't have to worry about checking your watch. There are no toilets or showers in the lounge, you must go back into the terminal if you want to use the bathroom. 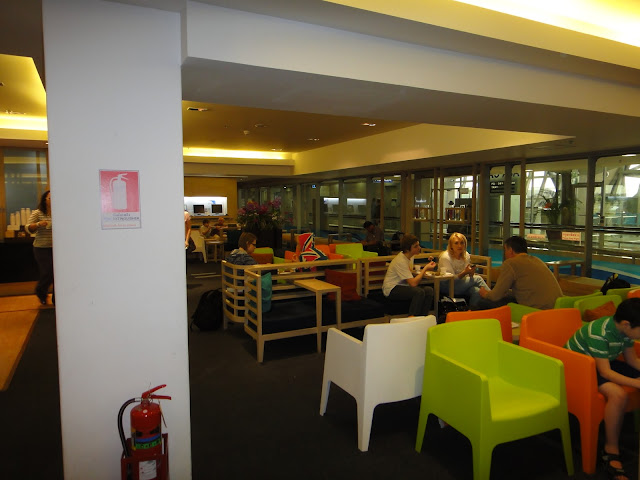 An announcement was made in the lounge that PG215 was to be delayed about 20 minutes due to a technical problem with the aircraft. After a while we were finally told to head to the gate for boarding. The aircraft was parked at a remote stand so we had to get on a bus at the gate. 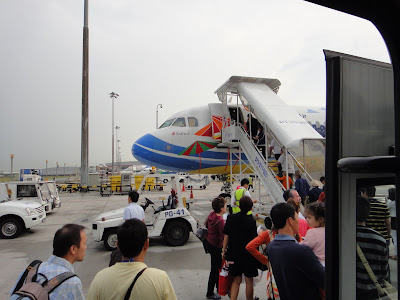 The bus pulled up next to an Airbus A320-200 and our rather right load of about 40 passengers climbed on board. The crew welcomes us warmly and I made my way to my window seat on the left hand side. Boarding was over pretty quickly and doors were closed. The safety video commenced and we pushed back... this is where things started going wrong!

The engines were started during push back but something didn't feel quite right. I'm not sure if it was the sound of the engines or what, but having experienced probably more than 100 A320 engine starts in my life this one just didn't sound right to me. Also, the hydraulic PTU sound kept going continuously during the engine start when normally it stops fairly quickly... those familiar with the A320 will know very well the PTU 'barking' type sound during a startup. It is something to do with hydraulic power and I am no engineer but it normally sounds a few times and stops... this time it kept going, and after a few minutes of sitting on the tarmac stationary we slowly taxi'ed back into an adjacent remote stand under the aircrafts own power, but very very slowly. At this point we realised there was an engine problem, and one of the flight attendants announced that due to 'engine failure' we would be returning. We made it back to a parking position and the engines were shut down, 5 or 10 minutes later the ground crew arrived back at the aircraft and connected the stairs. We were told to leave the aircraft with all our belongings and we were bussed back to the terminal and advised to remain in the lounge area while a solution was found.

We waited in the lounge about 45 mintues before we were told that an alternate aircraft would be operating the service and we should head to gate A3. As we approached the gate for our second attempt at getting to Chiang Mai I saw HS-PGX, an Airbus A319 at the end of the airbridge. I was pretty happy with this because I had never flown on an A319! Sure it is just a shortened A320, but it's still a new aircraft for the log. 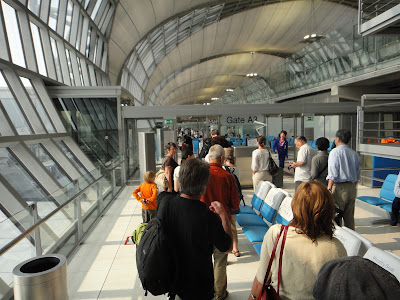 A few minutes after arriving at Gate A3, boarding commenced. Fortunately we would be using the airbridge and there was no need to take a bus to our aircraft. My original seat had been changed as it no longer existed on the A319, I was handed a new boarding pass for seat 12A.
A few moments later I was sitting abord my first A319 with registration HS-PGX. This IAE powered A319 was delivered new to Bangkok Airways 3 years earlier. After just coming off a much older A320 I immediately noticed the newer more modern looking overhead lights and airconditioning fittings.
﻿﻿﻿﻿﻿﻿ 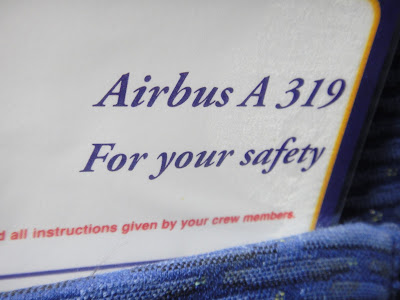 The same crew were abord the new aircraft and they welcomes us on board once more. An announcement was made apologising for the delay. Considering we had to swap aircraft though, the delay was not too severe at just over an hour and a half.

The same safety video was played and we pushed back and this time all went according to plan with the engines starting successsfully! Chiang Mai here we come !
With quite a bit of cloud in the Bangkok area we had a pretty bumpy ascent but once we arrived at 36,000 ft things quickly smoothed out and a meal service commenced. Today's flight was offering a (very basic) breakfast. The crew came around offering glasses of orange drink and a tray containing a small yoghurt, muffin and croissant. Tea and coffee came around shortly after. It wasn't much but it was fine for a short flight like this. The overhead LCD screens were playing  a 'funniest video' type show, with no sound available but it's not necessary as the comedy is all visual. 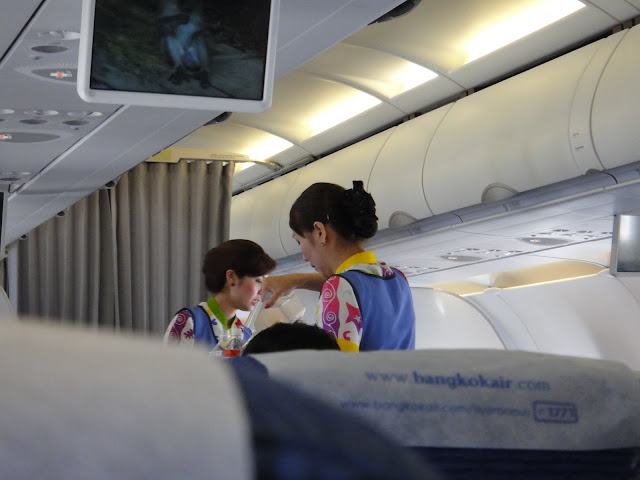 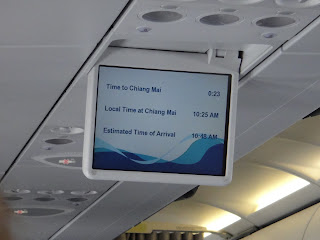 Flying time was approximately one hour so it wasn't long before we commenced our descent into a wet and cloudy Chiang Mai. The weather in March in Chiang Mai had been unseasonably cold with rain almost every day.


The crew came around and cleared our trays and we slowly descended over the mountains and through the clouds before making a smooth touchdown at Chiang Mai International airport. All in all a pleasant experience, despite the delay!


﻿
﻿This was my first ever flight with Bangkok Airways and I would use them again. All aircraft have tech problems now and then so I won't hold it against them for the initial problems with our A320. The prices on Bangkok Airways are now very competitive and sometimes cheaper than Air Asia, expecially when booking at short notice. The free lounge access for all at BKK and on board complimentary snacks are both great selling points. Next time I hope to try out a ride on one of the ATR72's to Trat to check out Koh Chang.
Airbus A319 Bangkok Airways economy class Thailand trip report