- July 22, 2011
After a brief but amazing time in Europe it was time for me to head back to Australia in time for my sisters wedding in Cairns. My journey to Cairns from London was to be on Qantas via Bangkok and Sydney. This post covers just the first sector, QF2 to Bangkok on board the Boeing 747-400. I flew in premium economy class on this sector, but firstly let's have a quick look at the terminal 3 Heathrow lounge offering.
Although most BA flights leave from terminal 5 at Heathrow, some still do use terminal 3 including all flights to Australia. Qantas shares terminal 3 with them and they use the BA lounges there just as BA use the Qantas lounges in Sydney. So, after a long day at Windsor Castle I found myself checking in quite early with a very friendly check-in girl who gave me directions to the lounge with a smile. With my Qantas platinum card in hand I was offered access to the Galleries First lounge, but before lounging I was in urgent need of a shower.
It is worth mentioning that there is an Elemis Spa available to those actually flying in First Class, and I believe BA Club World and BA Gold members. Unfortunately Qantas platinums flying classes other than first do not get access. Even without a spa treatment I felt very refreshed and ready for travel after my shower. I headed into the lounge and settled with a glass of champagne.

There is self serve food and drinks available but there is also an a la carte menu. The menu was nowhere near as extensive as that found in the Qantas First lounges. I ended up having a soup, pasta carbonara and some kind of raspberry cake dessert. All were quite tasty and were delivered quite promptly by the staff.

By the time QF2 was boarding things were winding down in the lounge as it was one of the last departures. In fact the staff had already closed the food buffet as I was preparing to leave. My timing was good as boarding was just being called as I arrived at the gate.


The premium economy cabin is a private area consisting of just 32 seats in total. It is located between business and economy class with the galley separating it from business and a bulkhead installed behind to separate from economy. Unfortunately the toilets allocated for premium economy passengers are behind in the economy section, meaning you still will suffer long waits for the bathroom at peak times. The seats however are much wider than economy with 8 abreast rather than 10, and seat pitch is a comfortable 38 inches.

I was pleased to see the seat beside me remained vacant as doors were closed meaning I would be undisturbed during the night. Soon after I had got settled in my seat the crew were around to offer pre flight drinks including sparkling wine (not champagne), juice or water. I took a sparkling. Not long afterwards a senior member of cabin crew came to speak to me personally to welcome me on board as a Qantas platinum member. He also offered me a fast track immigration pass for Bangkok which was not offered to other passengers and said if there was anything I need to simply ask him. Naturally I was quite impressed with this extra level of service and recognition.


At 6 minutes past 10 pm we pushed back, 9 minutes ahead of schedule. We were seen airborne and setting course for Bangkok when the smells of food started wafting through the cabin. Premium economy passengers are offered an upgraded menu when compared to economy and the food is served on proper ceramic plates although it is all on a single tray. It is very similar to a domestic business class meal on Qantas.


I have to apologise at this point as my camera started doing weird things, it was vibrating when I turned it on and made it impossible to take a photo of the menu or the food I was served. I can't even quite remember what we had but I do recall it being quite tasty. I finished it off pretty quickly and reclined my seat watching The Kings Speech for about the 5th time! I didn't last long though and I was soon passed out asleep after a long day which had started at 5.30am in Berlin.
It must have been quite a good sleep as the next time I woke up we had already passed India and my camera was working again!! 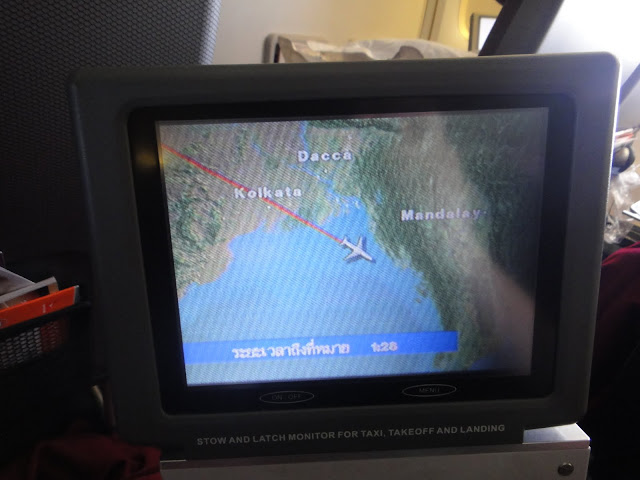 With 90 minutes to arrival breakfast was being prepared and I went for the eggs option which came with a fruit salad and bakery items. The coffee is served from a BODUM coffee plunger which is an improvement over what you receive on Thai Airways.


Breakfast was some kind of cheesy omelette with mushroom, spinach, tomato and potato. It wasn't too bad and regular coffee top ups were available. At this point the economy bathrooms had large queues forming and I really wished Premium Economy passengers had one for themselves. 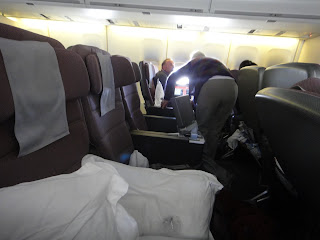 By the time breakfast was over there was a bit of time to keep watching TV or to freshen up in preparation for our mid afternoon arrival. The 11 hour flight so far had gone smoothly and I was pleased with the comfort levels in premium economy. A definite step up from economy! The English passengers across from me were on their first trip to Australia and first time in premium were very pleased indeed with the offering. I shared a few travel tips about Australia with them over breakfast and we talked about The Queen! Yes I am a monarchist I will admit it freely.

The descent and landing into Suvarnabhumi was routine and we arrived at the gate a full 20 minutes early. I waved goodbye to my friends across the aisle who were also having a stopover in Bangkok before continuing on to Australia and I power walked to immigration. I had two days in Bangkok before my journey back to Australia would resume.