The Royal Tour Part 8 - A return on bmi Business

- July 13, 2011
Well I have to apologise for my delay in updating the blog due to personal reasons but I am back with Part 8 of the recent tour with the Royal theme. This post covers my return to london on British Midland International.
I had a nice day in Berlin taking one of those open top tour buses on a hop on hop off style tour around the city. I thoroughly recommend it for seeing some of the major sights easily and covering them all quite quickly. Whilst I am in the mood for recommending things, may I suggest to my readers that if they are looking for quality accommodation at a good price in Berlin that they sample the Hampton by Hilton City West hotel. I was really impressed with the excellent service and modern comfortable rooms. It is also quite near to local bus lines making it easy to get around town.
Now for the flight, and I used on of the airport buses to return to Tegel. The buses are all modern and clean and each stop is mentioned on the electronic display and also verbally announced.
I arrived at Tegel having already picked up my boarding pass the previous morning in London and only carry on bags so I did not need to bother with the check-in queue. Instead I headed to the Lufthansa lounge for breakfast. There I found the usual continental breakfast fare I had come to expect in Europe so far. Croissants, fruit, coffee etc.

With no free wifi and limited entertainment options in the lounge I decided to wander around the airport and head through security to the gate area. Once again I was impressed that the distance from roadside through checkin and on to passport control and security and then the gate was all of about 30 metres walk! The BMI gate was right next to a gate servicing a British Airways flight to London Heathrow as well. They operate at very similar times and both were Airbus A319s. 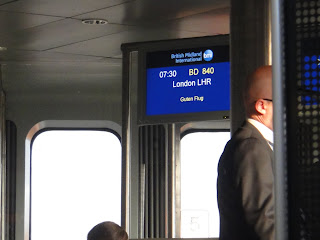 As the departure time of 07.30 neared, boarding was called for business class and gold card holders first. I made my way on board the 7 year old Airbus  and settled in 1F again. The aircraft was fitted with older style seating but at least had a cabin divider for business class (unlike my flight the previous day).
I was offered newspapers but declined and there is no pre takeoff drinks service. The flight was pretty full in economy with about 75% of the seats filled up by the time the doors were closed. 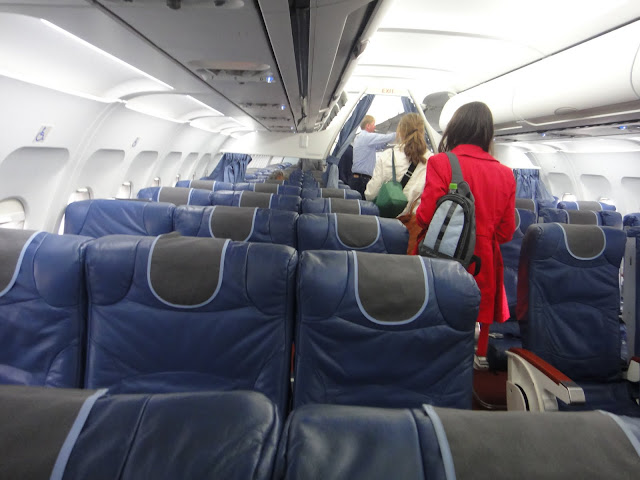 Pushback was delayed 10 minutes and we left the gate at 7.40am, making a quick taxi to the active and powering off one of the 2 main runways. I waved goodbye to Berlin outside my window and we ascended into the cloudy sky. We soon passed through the cloud and into the morning blue sky and the seat belt sign was extinguished. The smell of breakfast wafted through the cabin not long after and I was presented with my tray.


The meal this morning consisted of another vegetarian eggs breakfast. It was more tasty than the previous breakfast flight the day before however just have a look at the coffee they served. YES - that is COFFEE and not TEA!!! I have never been given such a pathetically weak and disgusting cup of coffee on any aircraft in my life. Absolutely terrible and I didn't take more than my first sip. I opted for a glass of apple juice instead. Bread and pastries were brought around to choose from as well. One interesting thing I found was that the yoghurt was caramel rather than fruit based which I would expect for breakfast. It was rather delicious though!


The meal was soon cleared away and I noticed we were passing over the giant expanse of Amsterdam's Schiphol airport below. It really covers a huge amount of land! Weather remained great and we crossed the channel and descended into London. There was no offer of extra drinks but I'm sure I could have had one had I rung the call button.

It was another routine landing at London's Heathrow and we parked at the gate just 8 minutes behind schedule. All in all an average flight with average crew and average food (horrible coffee). BMI has some work to do if it wants to impress me. I think even Lufthansa was better in business.