- January 15, 2012
A lot of the larger CRJ's flying around the USA these days are fitted with First Class cabins. This includes the Delta Connection (operated by Skywest) CRJ900. I had never flown on a CRJ900 but on a recent trip to the USA I had my chance and I took it! Today's flight is from Salt Lake City to Vancouver. 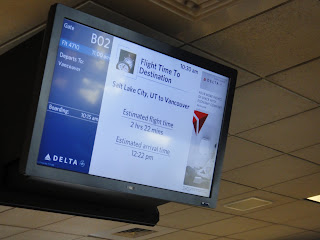 I had arrived off a flight from Las Vegas with a pretty tight connection so I made my way immediately to gate B02. There was no time to visit any lounge. I was originally booked in economy but had been on the upgrade list due to my Flying Blue platinum status and I noticed my name was on the board as a confirmed upgrade. I made my way to the gate agent and picked up my new boarding pass for 3C. I enquired as to whether I might have a window seat and the agent informed me that 3D was empty anyway so I could have both seats. Bonus!

Boarding was called nice and early and I headed down the jetbridge. This was my first time seeing an aircraft parked at a jetbridge that also had fold out stairs. A small metal ramp is used to connect the jetway to the aircraft whilst the stairs sit underneath, unused.

I was welcome aboard by one of the two cabin crew working on the flight. The aircraft is fitted with 64 economy seats in a 2x2 configuration, and 12 first class seats in a 1x2 configuration. The overhead locker is removed on one side in first class for additional head space. There was a bottle of water already waiting at each first class seat and I sat down in 3D and got comfortable. As you can see below, there is one missing window in this row.

The load in First was just 7 passengers with economy class looking only about two thirds full. Whilst boarding was underway the very friendly female flight attendant came around to each passenger in First taking pre departure drink orders. I had a coke.

Due to the light load boarding was completed early and we pushed back some 7 minutes ahead of schedule.... the rear engines starting up could only be faintly heard from up in row 3.


Soon after takeoff drink orders were taken, I had a vodka with ginger ale. Proper glassware was used, and immigration forms for Canada were also handed out.


There was no hot meal on this flight however the flight attendant came around with a basket of goodies including chips, chocolate bars and the like. I had some chips and a twix.

The flight attendant serving First was pretty good with drink topups and I ordered another vodka along with some peanuts. She came back with 2 packets of Delta nuts. 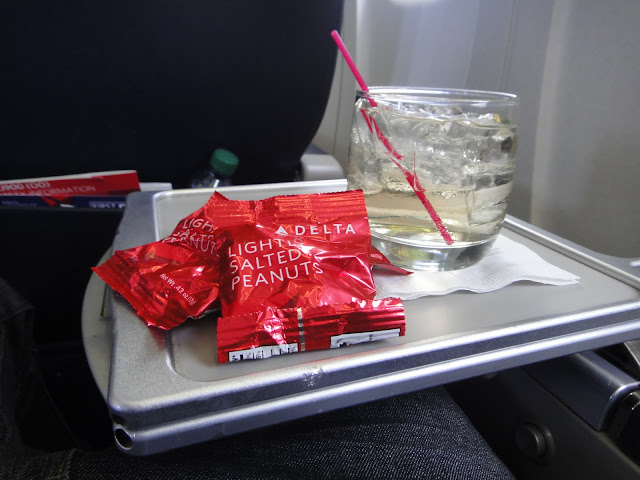 Whilst I was snacking I sat back and read my book and as we headed north and towards Canada I noticed a few snow capped mountains. I decided to have a Baileys on ice before the descent.


We were soon on descent into Vancouver and the scenery was pretty nice with lots of snowy mountains. Weather in Vancouver was pretty cloudy but I did manage a view of the city whilst on approach.

Landing was routine and we parked at another jetway in Vancouver. That end of the airport was very quiet but by the time I got to immigration queues were quite a bit longer with a few arrivals from Asia coming in. The immigration officer had a few questions to ask about why I was in Canada such a short time but he seemed satisfied with my answers of being a 'flying freak' and I was soon landside and awaiting the Hilton shuttle bus! 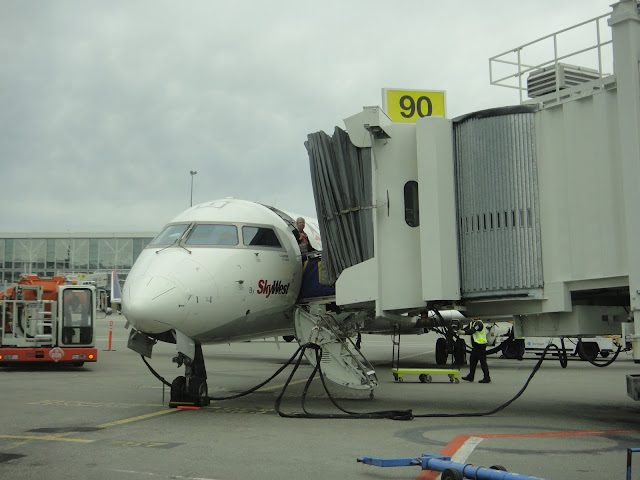