A Short Hop on Air Canada Express from Vancouver to Seattle

- January 12, 2012
On a recent trip to the USA and Canada I was looking for a good deal for a flight from Vancouver to Las Vegas. United.com happened to spit out a routing which appealed to the aviation geek in me! Vancouver-Seattle-San Francisco-Las Vegas. With rides on Dash 8-300, Bombardier CRJ700 and Airbus A320-200. I snapped it up in an instant! I would get to add both a new carrier and TWO new types to my log.

I took the hotel shuttle from the Hilton Vancouver Airport (Richmond) and arrived almost 2 hours before departure time. A quick check of the departures board reveals 2 direct flights to Las Vegas leaving within 10 minutes of my flight to Seattle. Well, why fly direct when you can connect.... right? So say the aviation geeks anyway.


I proceeded to the Air Canada check-in counters where the check-in lady could not work out why on earth I was travelling such a difficult routing to Las Vegas but soon had a laugh when I explained myself. Boarding passes were issued for all 3 sectors and I made my way through to the USA departures area where we would pass through US immigration in Canada and arrive into the USA basically as a domestic flight. 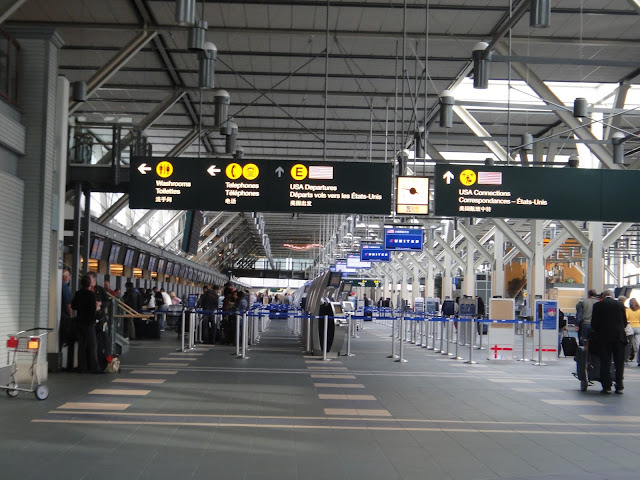 Once through immigration I made my way to the Air Canada maple leaf lounge. It was pretty basic with very limited food options but nice big windows with views over the ramp.


It was quite a long walk to my departure gate through a fairly deserted terminal and managed to take a snap of the aircraft operating my flight today. There was another Dash 8 just to its left which was operating a delayed service to Portland.

Boarding was being called as I arrived and I made my way down the stairs and across the tarmac before settling into seat 8A. The aircraft was really showing its age and needed a new paint job. The windows were scratched and the inside very tatty. Still, it's about what I was expecting.


The DHC8-300 seats 50 passengers and has one cabin crew member. Today we were served by a male flight attendant, who seemed only vaguely interested. Announcements were made in both english and french. There was a bit of a delay on the ground waiting for some late arriving passengers and we eventually departed about 18 minutes behind schedule. I had a tight connection so I was anxious that we got moving! Passenger load was approx 35 out of 50.

I do love the sound of those turboprop engines and from my seat I had a great view of the landing gear.


I actually did not expect any inflight service for a flight of just 30 minutes in the air but soon after takeoff the flight attendant did bring around some pretzels and a choice of juice or water.

Just as soon as we were up, we were coming down again.

The sun was beginning to set but it stayed just light enough for our landing in the scenic Seattle area. I must visit this city again sometime! My first and only visit was as a 16 year old back in 1997.

Less than 30 minutes after lifting off in Vancouver we were wheels down in Seattle. Fortunately for me we parked at the United satellite that my next flight was departing from, meaning just a short stroll to the next gate. I had plenty of time!

All in all a good and enjoyable turboprop flight. I was impressed that a drink service was offered on a flight of such short length. Looking forward to planning some more turboprop sectors soon!