- July 15, 2013
The recent change of Qantas' international strategy whereby they partnered with Emirates and changed their stopover point for London flights from Singapore to Dubai has seen many changes in the Qantas network. Before this year Qantas operated the A380 on the Melbourne to Singapore route and the aircraft continued on to London, the flight departed in the mid afternoon with a late arrival in Singapore. Now the flight ends in Singapore and is operated by the A330 and has a mid morning departure so people can continue on the same day to other Asian destinations (on other carriers like Jetstar Asia). As a result of this change there is no longer First Class or Premium Economy offered on the route, and the business class seat is the older skybed which is angled compared to being flat on the A380. This is disappointing but apparently the business class product on the A330's will be upgraded in the next 1 to 2 years. 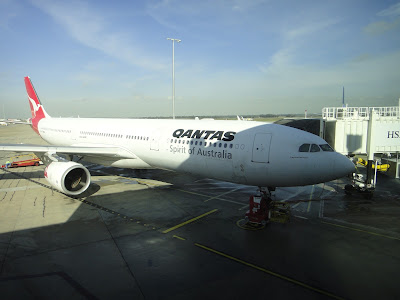 Whether this new strategy is going to be a success is yet to be seen, but I hope it works. So, what is Qantas now offering to business class passengers on this route which is also served by Singapore up to 4 times a day, Emirates daily and Jetstar daily? Let's have a look.


My journey started curbside at Melbourne International Airport departures. Being a Qantas platinum does have a few perks including the use of the First Class check-in zone accessed directly from the curbside. Once in this small room you are promptly checked in and bags whisked away and documents handed to you in a nice gold folder with 'First' logo on it, even when flying in other classes. Express cards are also provided to ensure you don't need to wait too long at security and passport control.

The check-in staff member was very friendly and there was only  one other passenger being processed at the time I was there.  This was in comparison to the zoo outside in the main terminal check-in area which was very crowded as I was travelling right at the beginning of school holidays!

Check-in complete it was time to complete the outbound security and immigration procedures and head directly to the Qantas First Class lounge, again, this is a perk of holding oneworld Emerald status or Qantas Platinum or higher. If you have only gold status or are simply holding a business boarding pass with no status you will be using the more basic business class lounge facilities downstairs.

My partner and I were warmly welcomed into the lounge and promptly asked whether we might like to book a Payot spa treatment. We both said yes and we were told the spa attendant would come and see us shortly. In the mean time though it was time for some breakfast in the restaurant (operated by Neil Perry's Rockpool). Here are some of the offerings:


As promised the spa attendant came during our breakfast to offer us a booking at the spa.  We both elected for mens hot towel facials and were given a time of 8.50am. With time to spare, after breakfast we moved into the lounge chairs with tarmac views where I continued to sip on Taittinger champagne (one of several French champagnes available).

Eventually it was time to head to the tranquility of the spa and get our facials. It really is an amazing way to start a journey. The treatment was only 30-40 minutes but I left feeling fabulous and my skin looking terrific!

At about this point it was announced that the QF35 to Singapore was going to be delayed. The communication from the lounge staff was very good and kept us informed. Initially the delay was expected to be only 20 minutes and the reason for the delay was that engineers needed to inspect the aircraft as it had been hit by lightning on its previous service to and from Hong Kong. Just a routine inspection but unfortunately it did drag out quite a bit and the delay ended up being just over 2 hours in the end.

By that stage part of the lunch menu had become available in the restaurant so we decided to have some of the salt and pepper calamari which was delicious as usual.

Eventually engineering gave the aircraft the all clear and it was time to head to the gate and board VH-QPB (named 'Freycinet Peninsula'), our Airbus A330-301. This particular aircraft is just under 10 years old at the time of this flight.
Despite the above sign priority boarding was not being enforced and a mass of people were lined up at both queues. It didn't bother me too much as the queue moved quickly and it wasn't long before we were welcomed aboard. 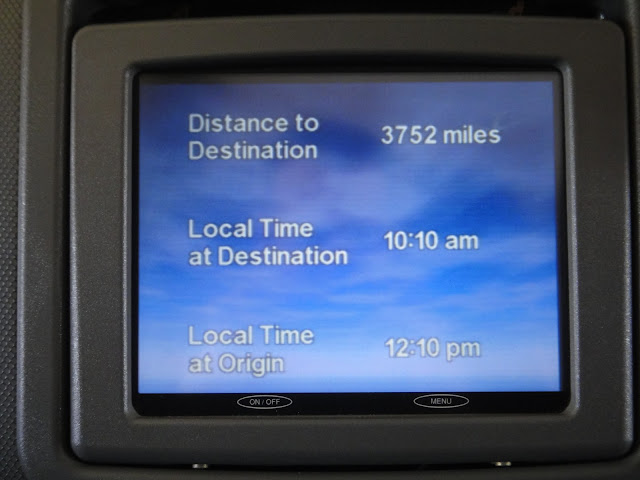 Boarding was finished pretty quickly and welcome drinks were on offer, champagne was my selection of course. The captain came on the PA and gave a nice and sincere apology for the delay and offered a detailed explanation of the reasons. I appreciate this and it is something that some other carriers don't seem to do (in particular some Asian airlines). Fortunately it looked like I would just make my onward flight from Singapore to Kuala Lumpur that night.

For those wondering, the load in both business AND economy was 100%. Not a spare seat left, a common occurrence during Australian school holiday periods. I was happy to see the good load anyway as I am keen for Qantas to succeed and eventually start expanding it's international operation one day.

The seats are probably a design you have never seen before unless you fly Qantas, as they were designed in Australia by Marc Newson and built by BE Aerospace USA to Qantas' exact requirements. The newer version has a similar look to it but goes fully flat on the A380 unlike these ones.

The menu for today's flight was as follows: 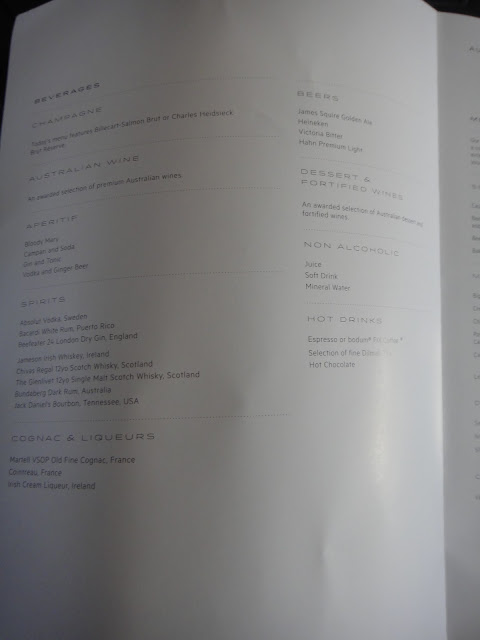 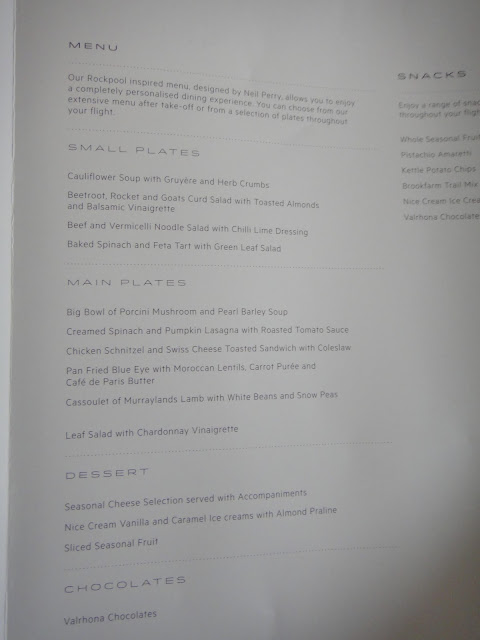 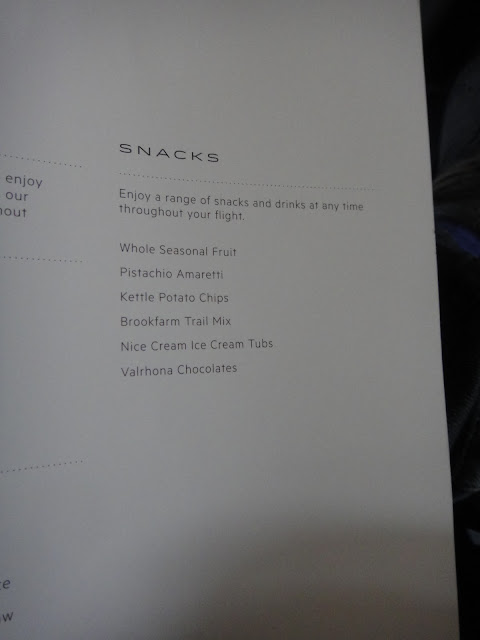 The mens and womens amenity kits ( branded Kate Spade for women and Jack Spade for men) were also handed out. They look like a pencil case and contain all the usual bits and pieces including some Malin+Goetz  moisturiser and lip balm.

Our takeoff was towards the south on runway 16 and after some right hand turns we headed in the general direction of Singapore. It was a clear day and the seat belt sign was soon extinguished allowing the service to begin.

Firstly a round of drinks with a packaged almond and pretzels mix... 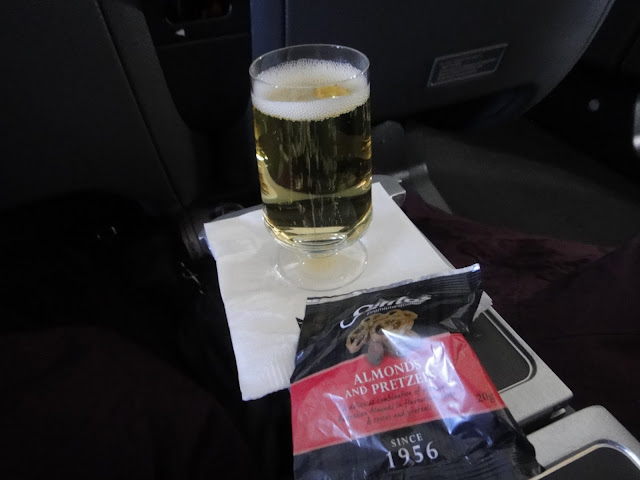 Next up the main course...


This is followed by your choice of fruits, cheeses and dessert... or all! The dessert was a pre packaged ice cream but it was high quality and very nice.


Once the main meal service was over it was time to settle back and enjoy the inflight entertainment system. I kept the moving map display on whilst I caught up on Revenge season 2 on my own tablet. 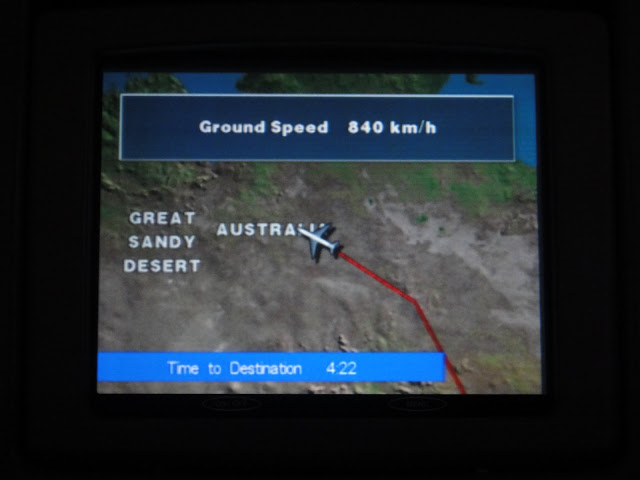 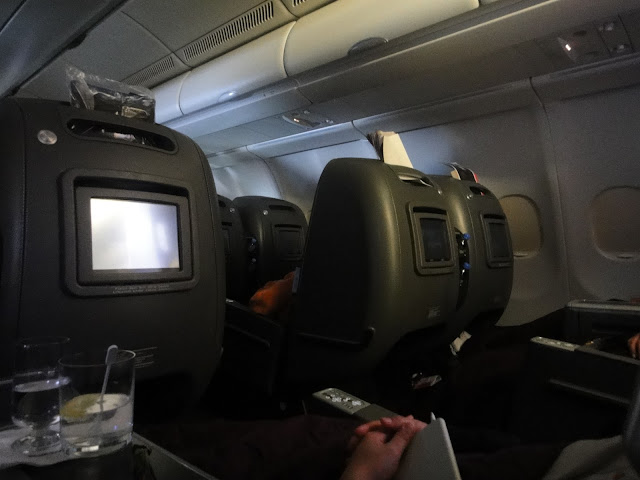 The response to hitting the call bell for a drink was always very quick and met with a smile. The crew seemed friendly and mostly  had a smile on their face. It is worth noting that in business class there is no actual second meal service as such, but you are welcome to order from the menu at any time and a meal will be prepared for you, as long as what you want is still available. About 2 hours out of Singapore I was told when I asked what was left, I could choose from the quiche, beef salad, or chicken schnitzel sandwich. I went for the quiche, my partner had another round of the beef salad which he seemed to really love!


I have no more photos as I was sitting in the middle section of the aircraft so no photos of the exterior views sorry. The remainder of the flight was routine with a landing in Singapore about 2 hours behind schedule.

So, how about the seat itself? Well it is angled lie flat which is still used on several airlines flying Asian routes into Australia (Thai, Vietnam, some Singapore Airlines, Malaysia Airlines etc). So it is still competitive but with fully lie flats becoming the new standard (Cathay Pacific for example), Qantas will need to update as soon as possible. Despite that I found it very comfortable for this daytime service where I did not sleep but I did lounge around eating, drinking and watching tv shows. It is a more cramped cabin though when compared to say the Thai Boeing 777, this is due to the more narrow fuselage of the A330.

Service on board was good. I enjoyed the food choices and wine as well. I appreciate having a choice of starter as I often find with other carriers I am given salmon as a first course and I just don't like it. I also enjoyed the freedom of being able to dine whenever I felt like it for the second light meal.

Overall a very pleasant flight and I am rather looking forward to seeing what Qantas will come up with when they replace these current business class seats. And yes I did make my onward flight, by about 10 minutes!