- September 13, 2013
Last month I had a look at the trans-continental business class offerings on Qantas and Virgin. This month I will be looking at the trans-tasman offerings instead! I took a quick trip to Auckland, going over on Qantas in Business and coming back on Emirates in First. As you can imagine there is quite a big difference between the two. Let's see what's on offer with Qantas.


Today's flight was the QF131 lunchtime service, departing at 11.50am for a 5.20pm arrival in Auckland. The flight is scheduled 3 hours 30 minutes and operated by Jetconnect on behalf of Qantas. Jetconnect is a fully owned Qantas subsidiary based in New Zealand, it was created to save Qantas money by hiring Kiwi staff at lower rates than their Australian counterparts flying at Qantas. A bit of a shame but also understandable considering how much competition there is in the industry.

Being a Qantas platinum I was quickly processed for check-in at the first class checkin zone and then with express pass in hand I was through immigration and customs quick smart.  Once in the lounge I had a lovely breakfast of an omelette with hash brown and fruit salad.... not to mention a glass or two of Taittinger. Whilst I was seated a member of staff came and made a spa treatment booking for me.  I opted for a neck and shoulder massage. Once that was done it was time to board, so it was off to the gate!


Boarding was just commencing as I arrived and I was one of the first on. Today I was seated in 1A. Already at the seat was a menu, pillow, blanket and headset.

I was warmly welcome by the Kiwi crew as I boarded and my coat was quickly taken and placed in the wardrobe. Pretty soon all 12 of the business class seats (in a 2x2 arrangement) were occupied. A good load in business but up the back only 90 passengers today, a little over half full.

A welcome drink was soon offered and I took a sparkling wine. Boarding was soon complete and welcome announcements made. Pushback was actually a few minutes early and we were soon on climb and headed east.
The Jetconnect fleet of B737-800's are fitted with AVOD in all seats and in business class the screen pulls out of the armrest. It's quite a big touch screen and there are plenty of good options in both the TV and Movies section. Certainly you won't get bored on this 3 hour hop. Unfortunately the entertainment is only available after takeoff though as it needs to be stowed during takeoff and landing.


The seats are basically the same as Qantas' long haul premium economy seat. It's a typical size for a Boeing 737 business class offering but legroom is very  minimal in rows 2 and 3. In row 1 it is acceptable and you can get out of the seat and past the person in 1B without them having to stand up. You can't do that in row 2 or 3 though.

Pretty soon drinks and nuts were on offer... nuts came in a packet and not in a bowl which is always disappointing. 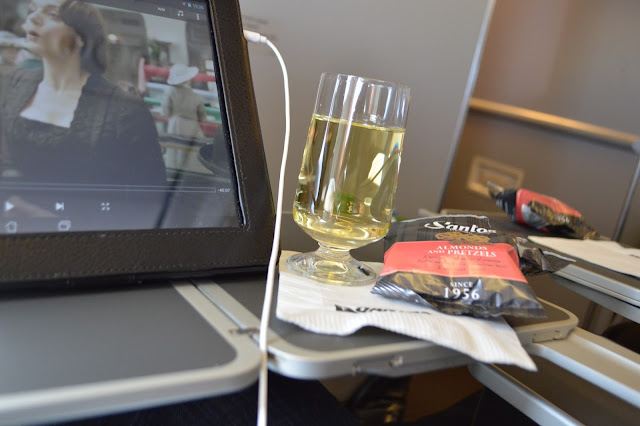 After the nuts the table cloths were laid and the meal service commenced. The meal was served on a tray just like domestic business class. It is a worse offering than the trans continental flights to Perth which offer international style catering. I'm not sure why Qantas does not offer the same on trans tasman as the flights are of a similar length. Anyway, I had the soup starter: 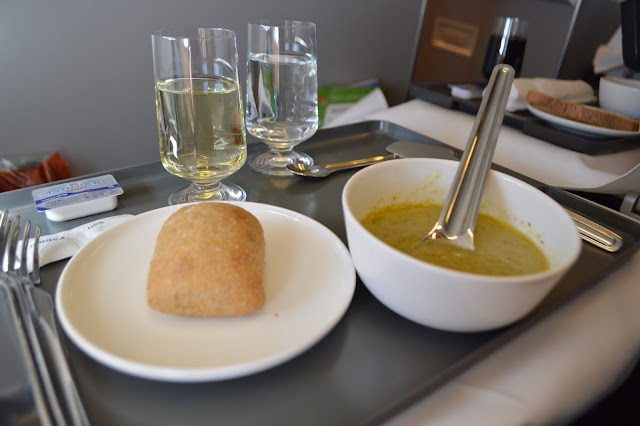 Followed by  the braised beef cheeks with rice main course: 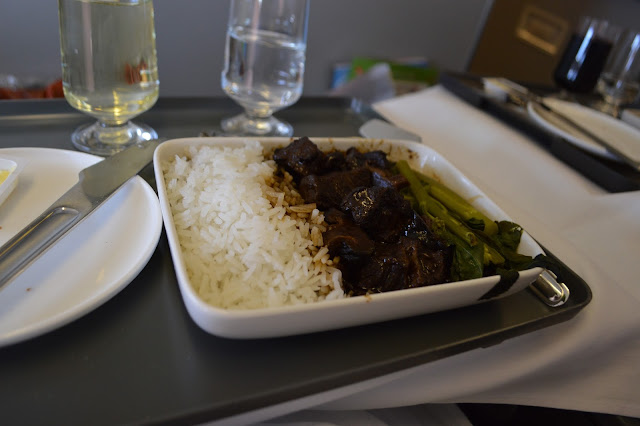 And ice cream for dessert: 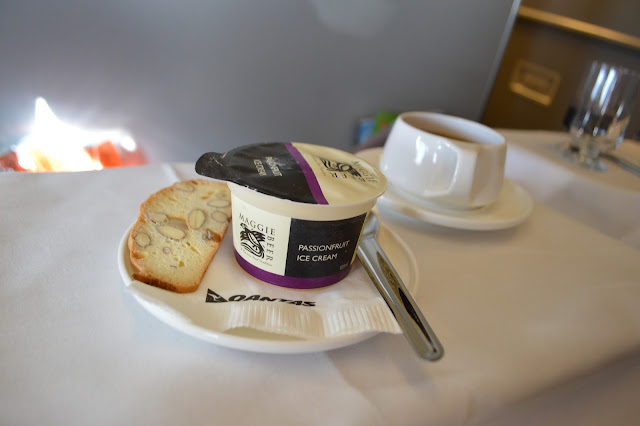 The meal was perfectly ok but not outstanding. Considering the high standards I had been offered the day before on Perth to Melbourne I was a little disappointed. I think Qantas needs to bring the trans tasman catering standards up to the trans continental or international standard right away. Have a look at my review here to see what I am talking about. The presentation of the beef on this flight was quite poor and the taste was ordinary. The service levels on the other hand though were quite good, and wine top-ups were regularly available. I did not partake in too much though as I was driving on arrival at Auckland. Once the meal was done I went back to watching shows on my tablet and soon enough we were on descent into a very murky Auckland:


With favourable tailwinds we touched down a good 20 minutes ahead of schedule at 5pm.


As you can see above we taxi'ed by the two Emirates A380's preparing for their flights to Dubai via Melbourne and Sydney respectively. I would be flying on one of those flights the following evening!

With carry on baggage only and with an Australian e-passport I was through passport control and customs in just a few minutes and I was soon picking up my rental car. I made it just in time before a torrential downpour making for a rather wet drive in to the city.

I did enjoy my flight on Qantas but having flown Air New Zealand on a Boeing 777 on the same route in business class there is no real competition. Air New Zealand wins hands down! Where Qantas has the advantage is their schedules, with 3 daily Qantas flights offering business class on the route, Air New Zealand only has one (the other ANZ flights are economy only). The other part of the trip which ANZ can't compete on is the Qantas First Class lounge in Melbourne with it's great restaurant and spa treatments, of course that can only be accessed by Platinum frequent flyers or oneworld emeralds.

Next report will be the Emirates A380 in First Class for the flight back home!
Boeing 737 business class Qantas trip report