Qantas First Class to London on the A380 : Part 2 QF9 Dubai to London

- January 30, 2014
This is the continuation of my trip from Melbourne to London on Qantas' flagship Airbus A380, flight QF9. For part 1 go HERE.

After landing in Dubai on schedule with 13.5 hours of flight behind me it was time to head to the Emirates First Class Lounge in terminal 3. This is the lounge which features direct boarding  to the aircraft, but more on that later. As I was among the first off the flight there was nobody waiting at transit security so I was through and up to the lounge in no time.  First up it's time for a shower since Qantas don't have them onboard like Emirates do! 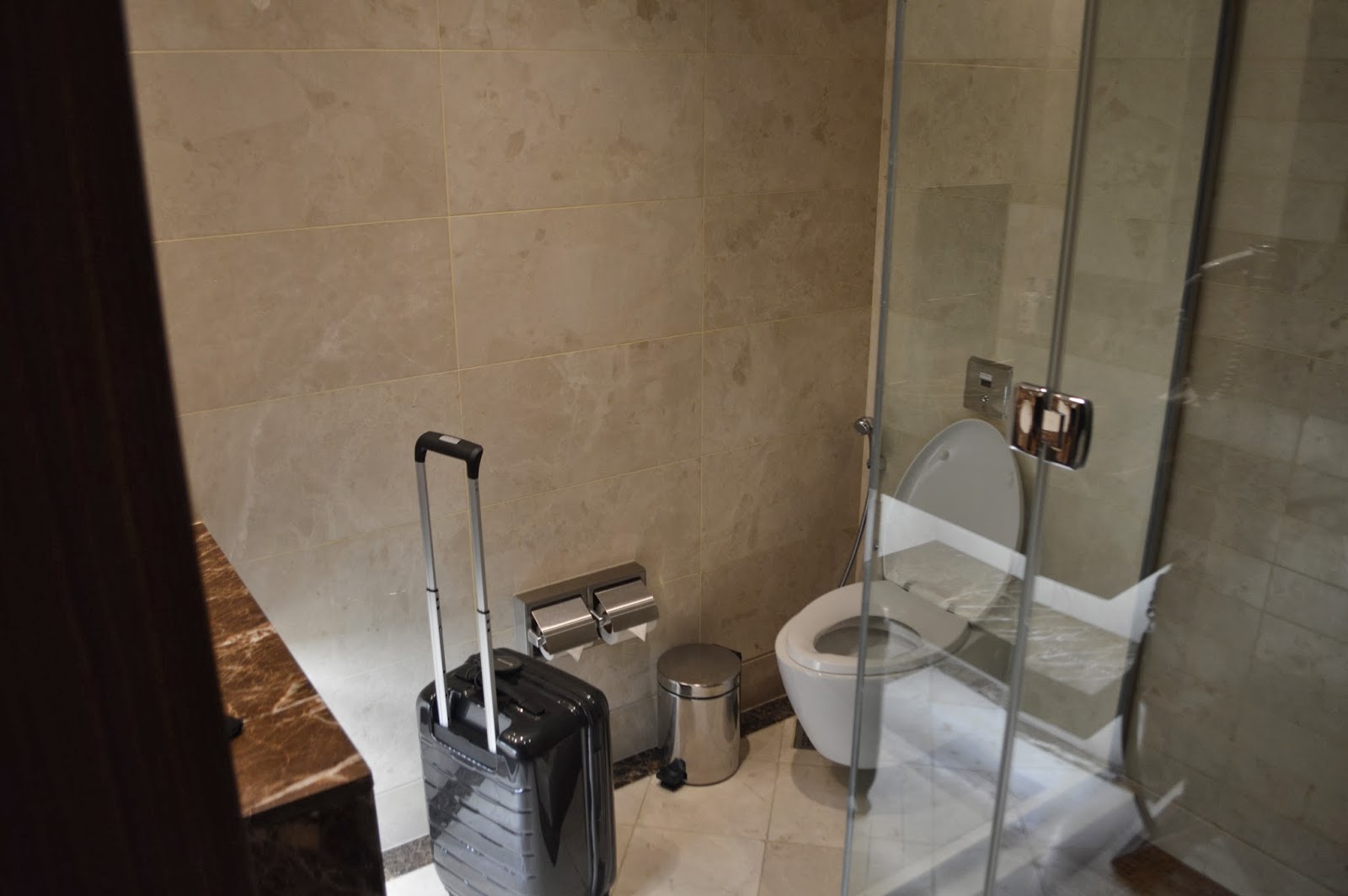 Being a new terminal the showers are still in good condition and the shower attendant showed me to an available suite. Inside, all the expected amenities are available including toothbrush, razor blade etc. It was a lovely refreshing feeling to have a shower such a long flight. By the time I was done with the shower it was about 11.45pm and there was about 90 minutes remaining before QF9 continued to London Heathrow.


I took advantage of one of the complimentary spa treatments and had a 15 minute foot massage performed by a nice filipino lady. It was good but not as nice as those offered in Bangkok on Thai Airways first and business class.

After that I decided to check out the 'Fine Dining' restaurant. I was shown to a seat and offered a menu and asked for my drink order. I requested a champagne and I was told that it would be Moet. I ordered a steak and the waitress advised me I could visit the buffet section as well whilst I waited.


By the time the steak arrived I didn't have all that much time to consume it, and it was also rather under done. I had asked for medium but it came rare so I didn't finish it. It was still tasty though and well presented. It's not like I was particularly hungry any way!

I was still at the dining table when flight QF9 to London Heathrow was called for boarding. As I mentioned earlier this lounge features boarding direct from the lounge to the aircraft. Each gate is connected to the lounge by elevator and there is a seperate gate agent posted in both the business and first class lounge levels.  They scan your boarding pass and direct you to the appropriate elevator depending whether you are on the upper deck or lower deck. I took the lift to the lower deck level and proceeded to the forward door entry for First Class. I was greeted by the British crew member on board and escorted back to Suite 2K which has been cleaned and freshened up since I had last sat in it. 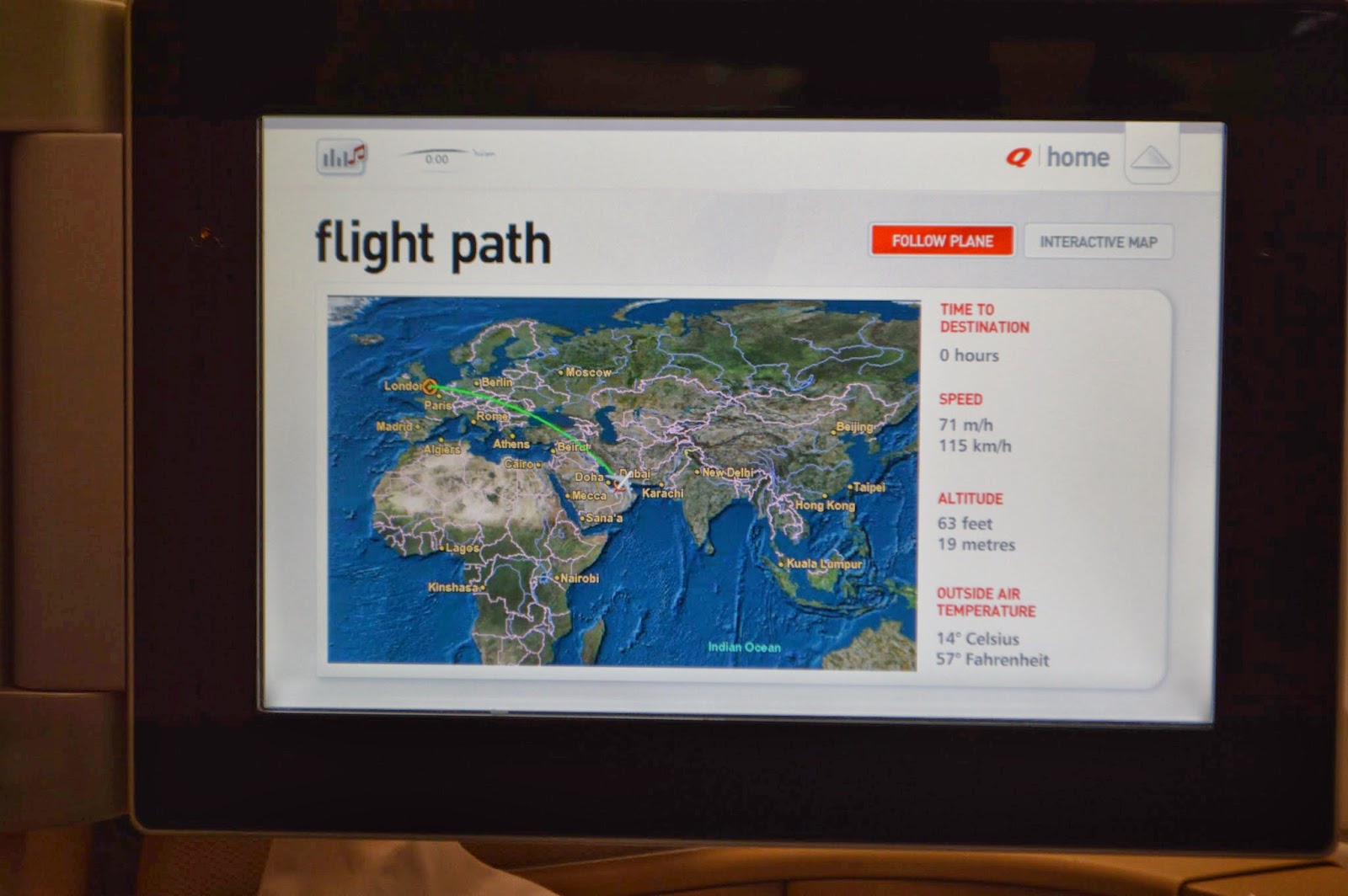 What happened next was basically a repeat of what had happened back on the ground in Melbourne except the crew had changed and become British! For those who don't know Qantas have a cabin crew base in London that crew the flights between London and Dubai. These crew once flew for Qantas on it's old routes between London and Hong Kong, Bangkok and Singapore but they are now down to just Dubai. It must be rather boring flying the same route over and over.

The young male flight attendant serving my seat offered me a welcome drink and I was back on the Pol Roger Winston Churchill 2000 for this flight. I declined the olives but had some almonds. Also on offer was another set of pyjamas and another SKII men's amenity kit. I took both as souvenirs since I already had received them on the first leg. 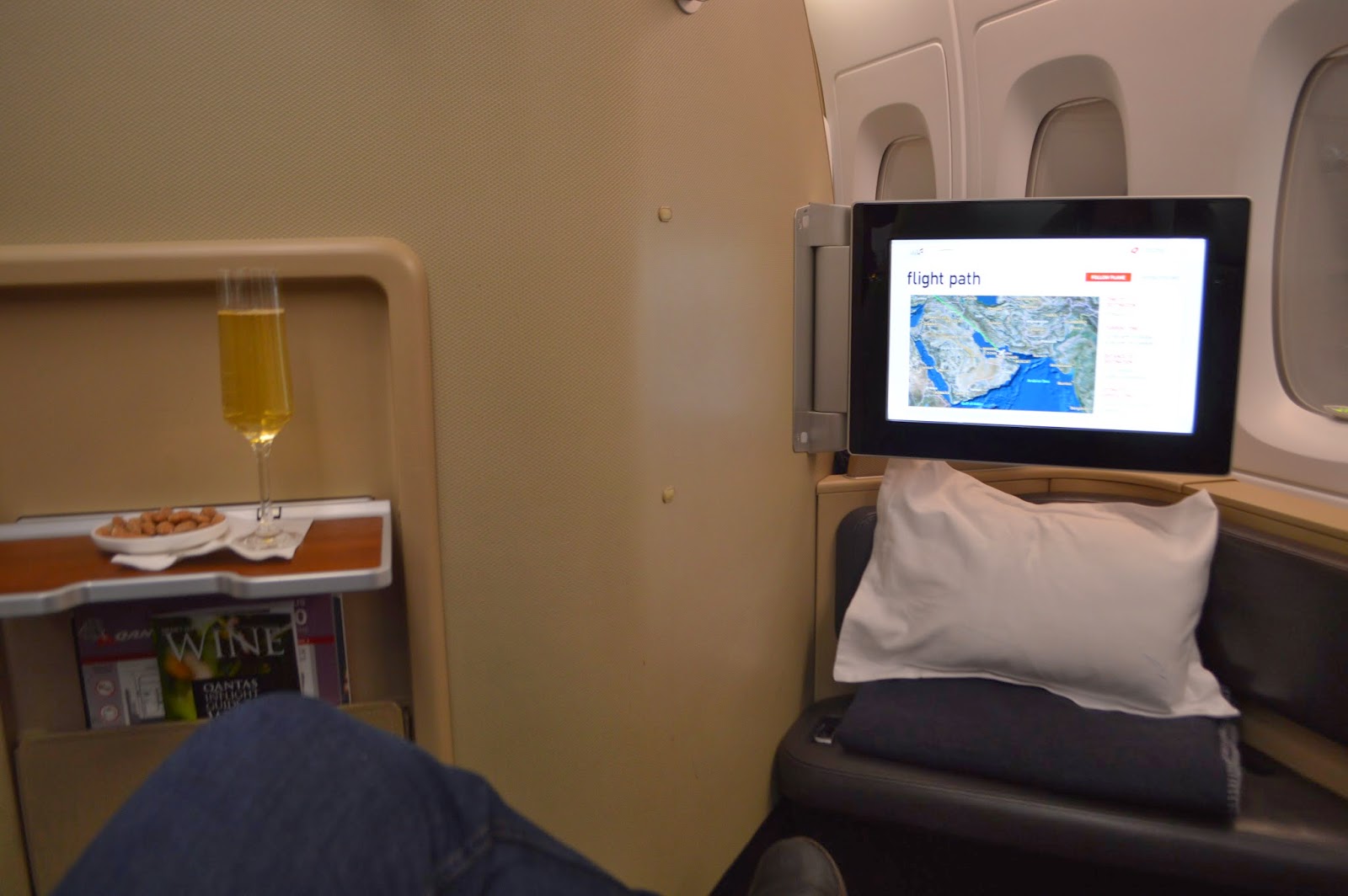 Whilst I was sitting there enjoying my champagne I looked across the aisle and saw this: 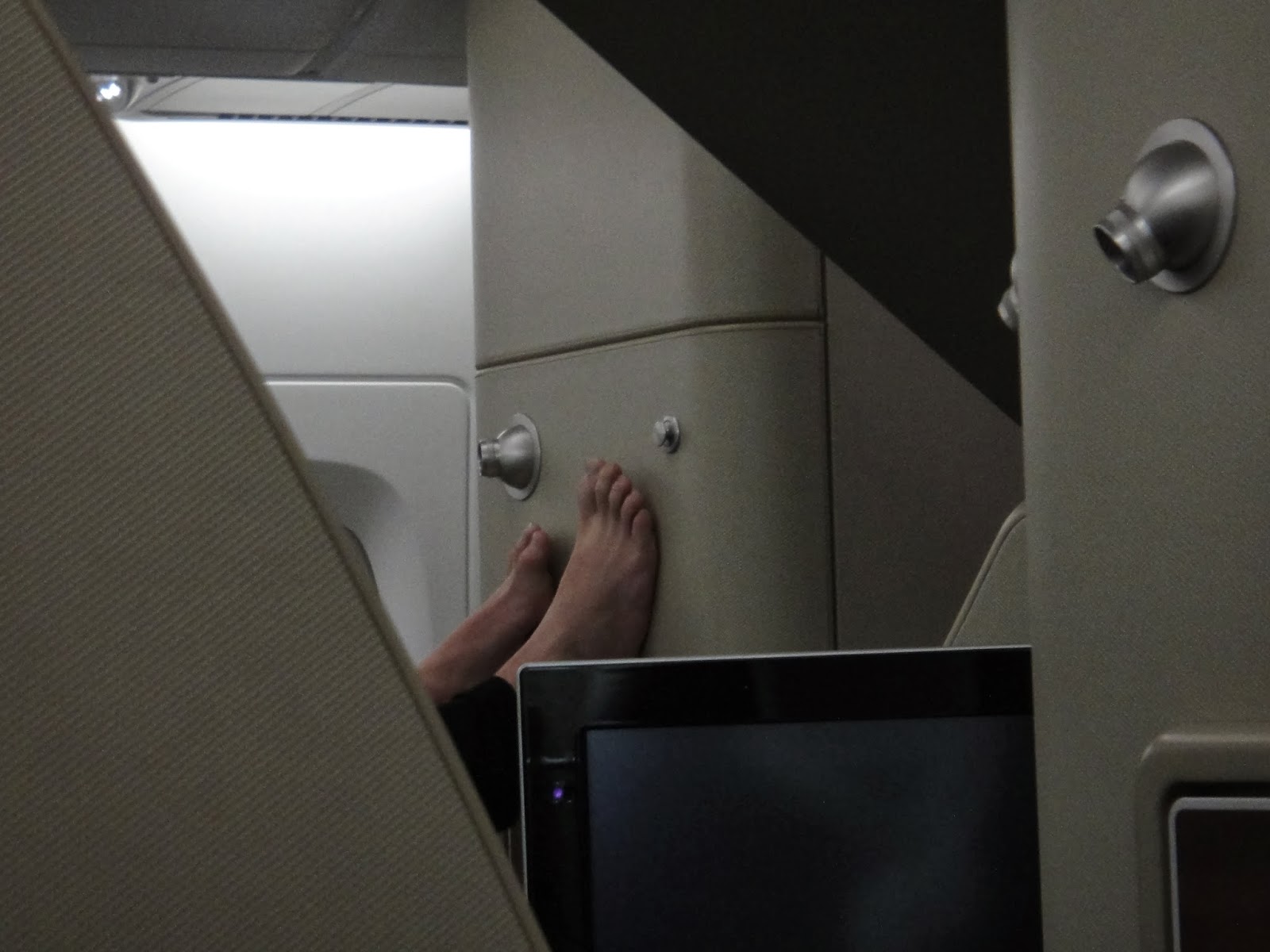 GROSS!!! What kind of First Class customer is this? Firstly why the bare feet? - put a pair of socks on, they give them to you free, plus they give out slippers too. Next, its not like these seats aren't roomy enough that you need to stick your dirty, stinky feet up on the wall for everyone to see. Mr Suite 1A  - you disgust me. There I said it!

Once everyone was on board (and the cabin had only one empty seat) we departed basically on time at about 1.20am. I noticed that half the passengers in First were children under 15, lucky them!

It's a ridiculous time to have a full meal so after takeoff I declined the main course and decided to just have the dessert. I chose a Panna Cotta and it was delicious. I ordered a peppermint tea to go with it. 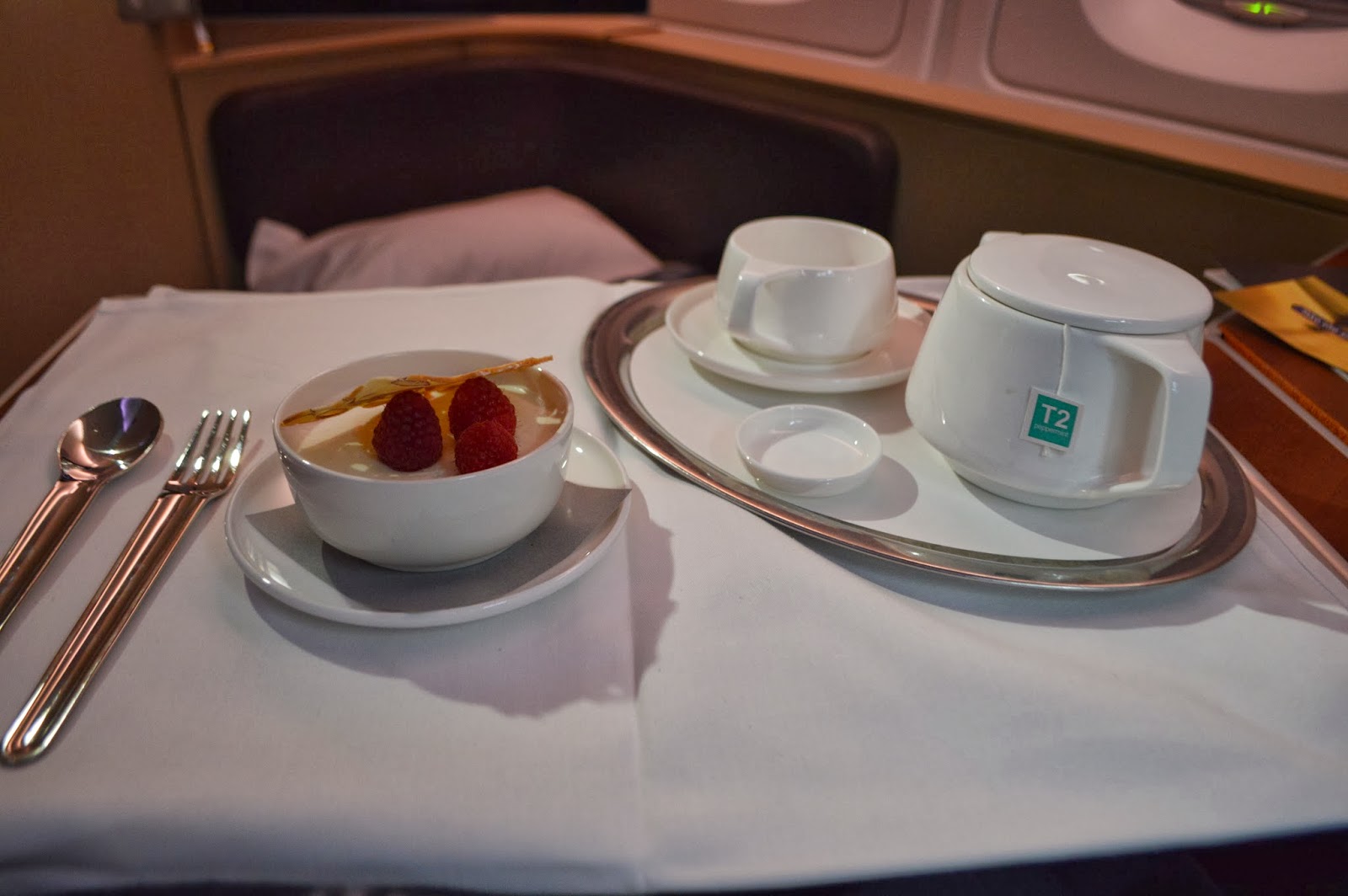 By this time I was getting tired, so as soon as that was over I asked for the suite to be made up into a bed and I got in and watched some TV for a short time whilst some other passengers ate a meal and others were already asleep. Since the cabin was still lit, although dimly, I made use of my eye shades and ear plugs. 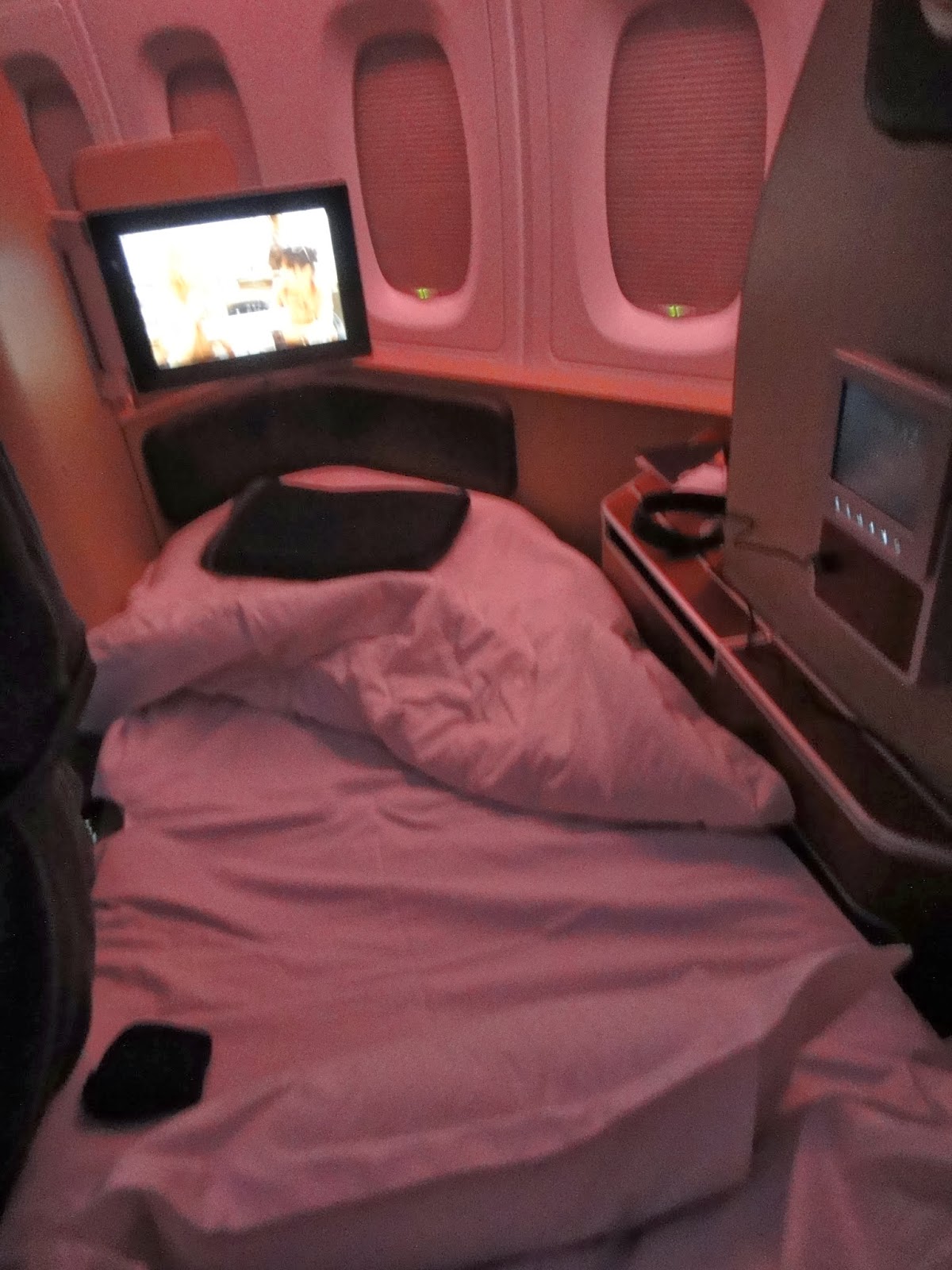 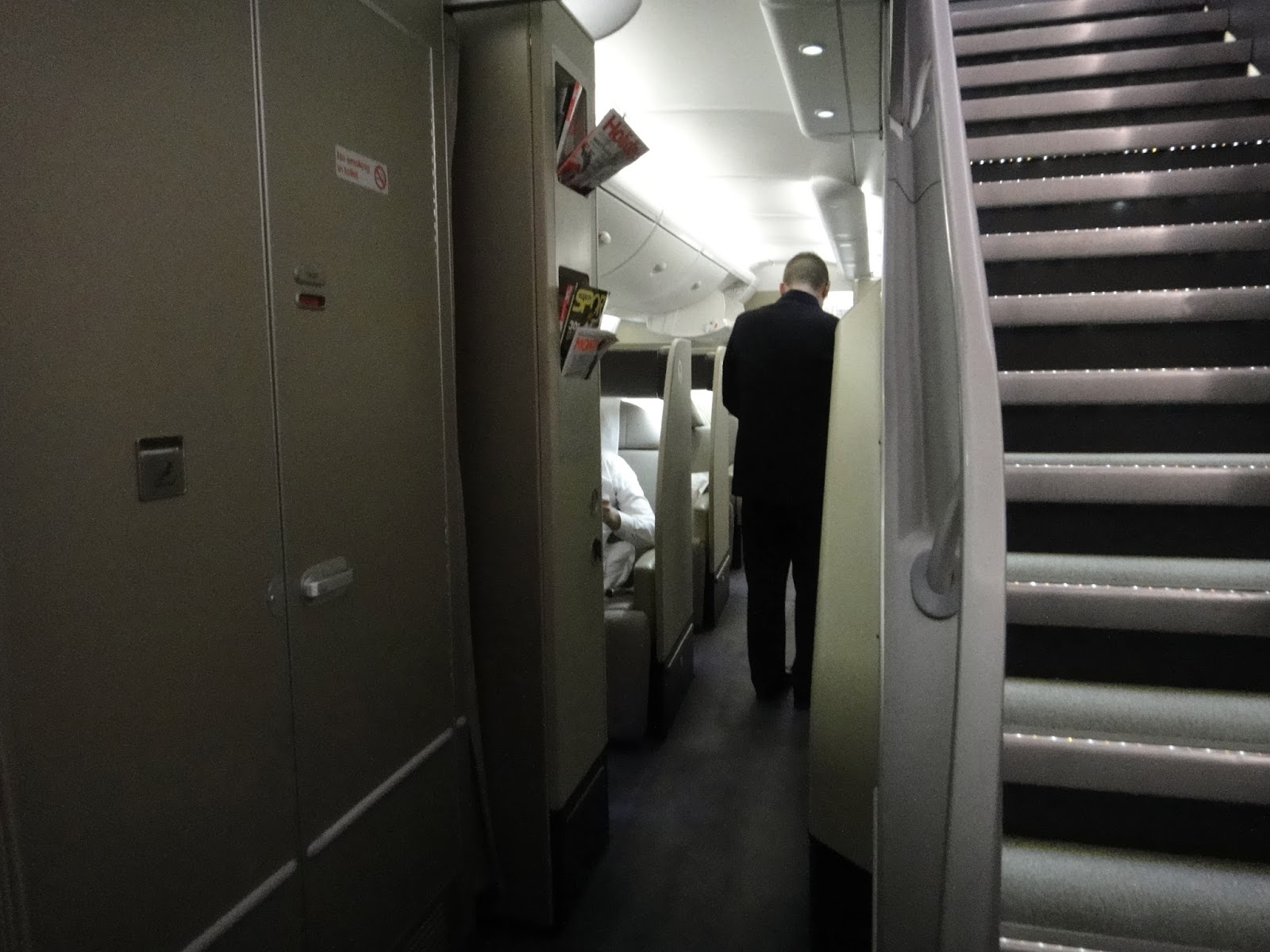 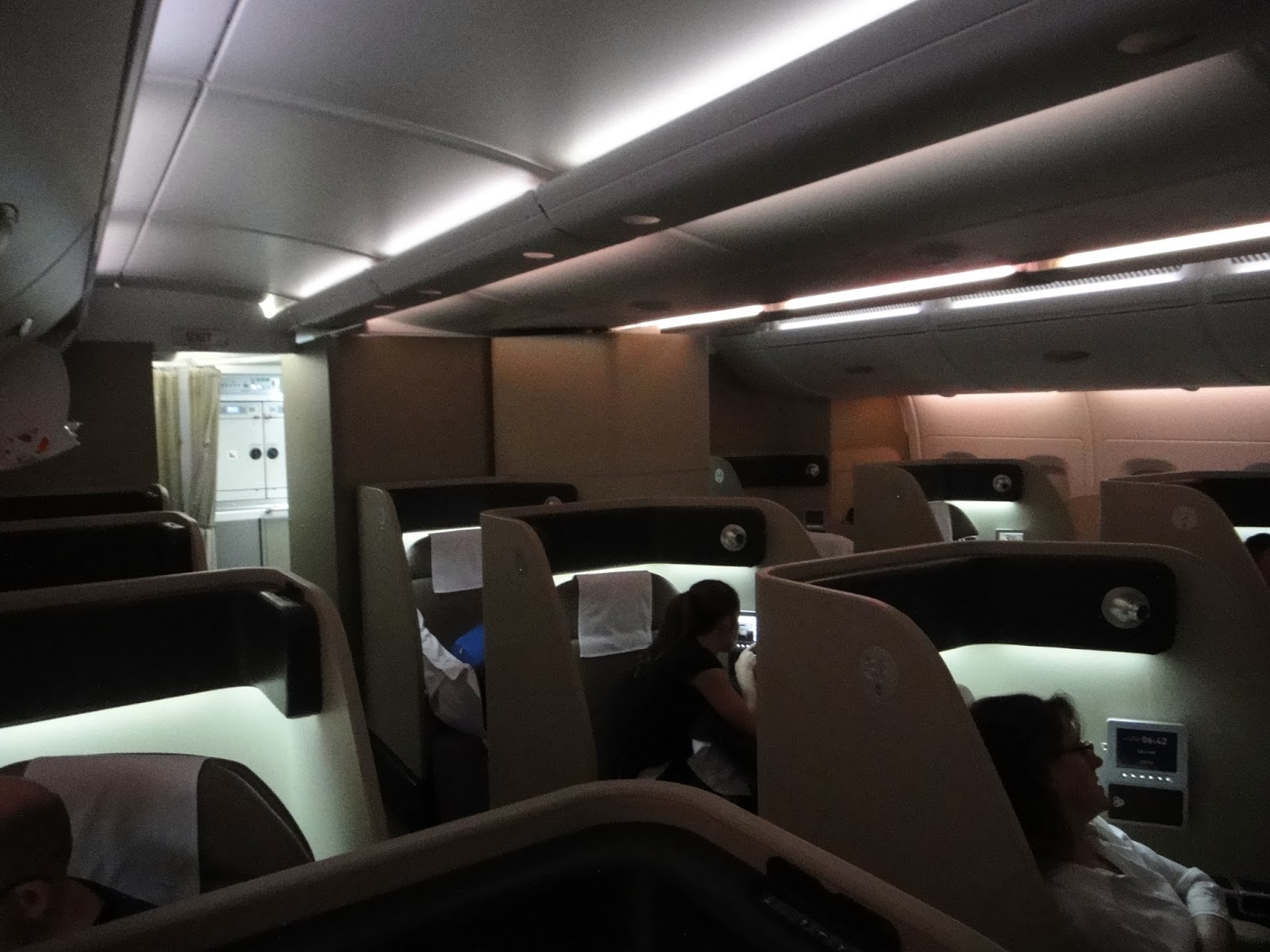 After a few hours sleep and at about 3am London time it was time to get up and have breakfast! First up a nice smoothie and a bowl of bircher muesli: 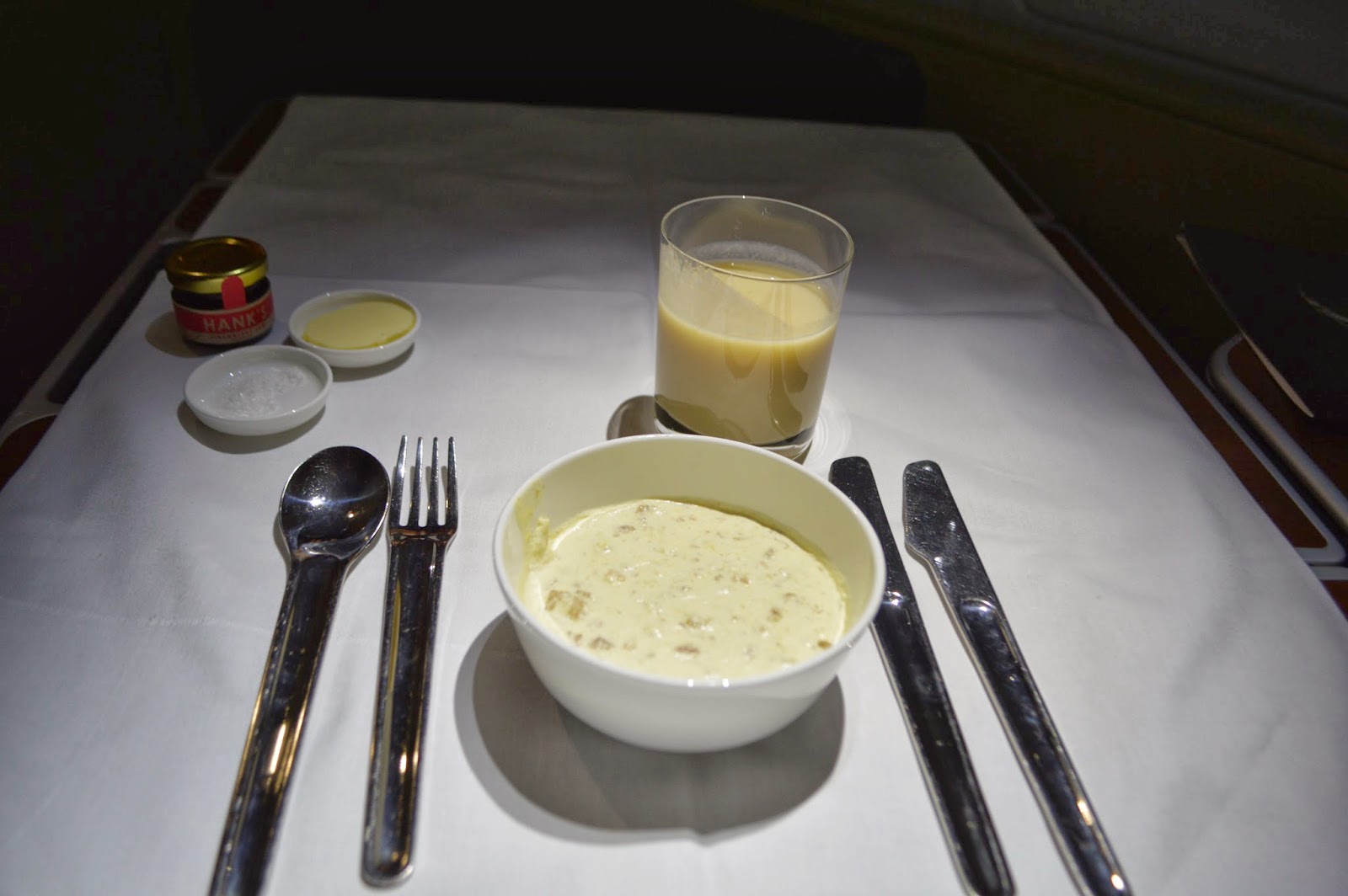 The bircher muesli was heavenly. I actually still remember the taste a few weeks later, I think it was the best bircher I've ever had! Once I had finished every last bit of it I was offered any pastry items but to be honest I just wanted a plain old piece of toast and that is what I ordered: 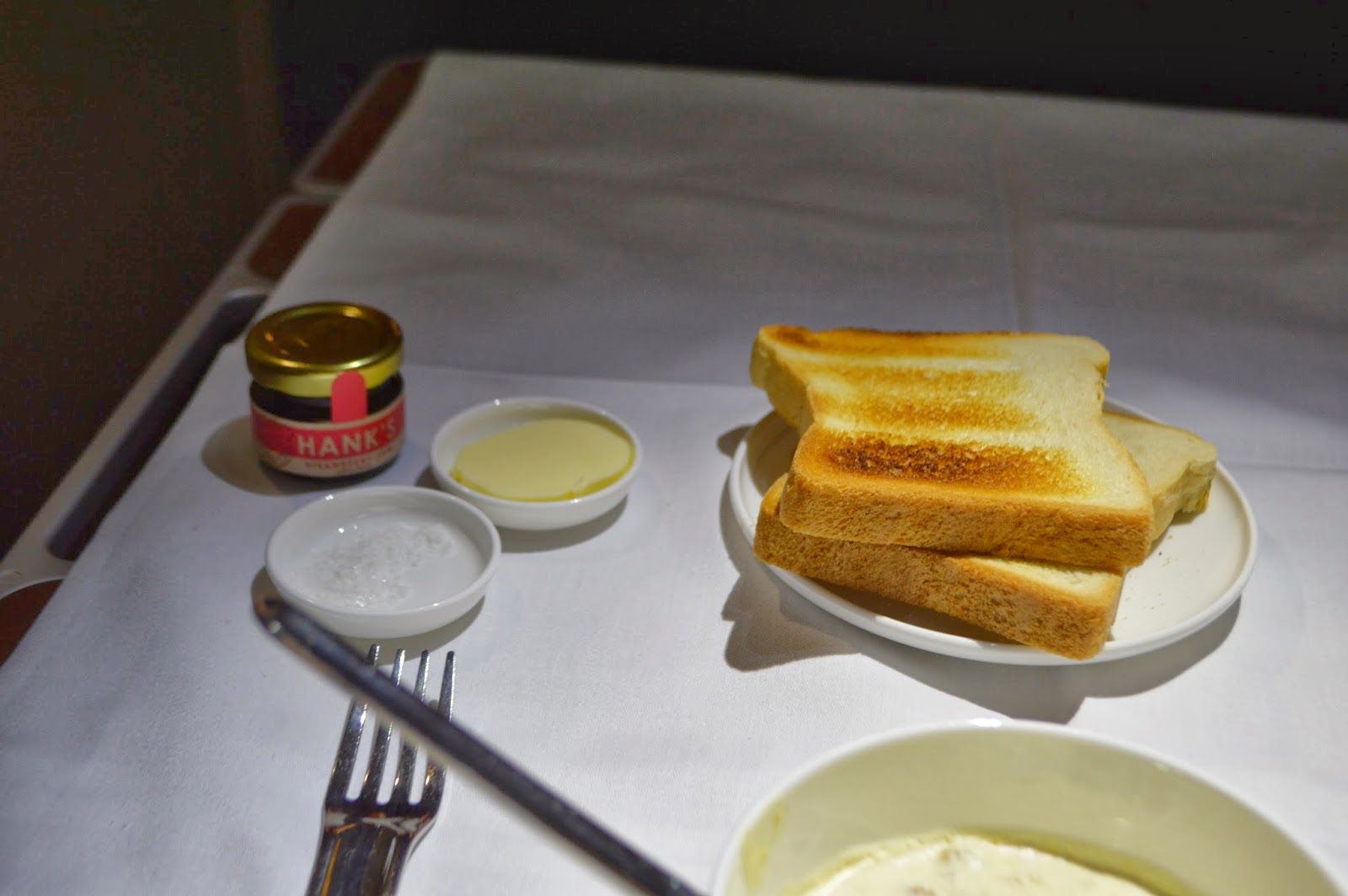 If you were hoping for bacon, forget it! One of the bad points about Qantas' new Dubai stopover for London flights is that no pork products are served on board at all. It's been heavily debated in the online forums and whilst I do love bacon I can  certainly go without it. I ended up having scrambled eggs, corn fritter, mushroom and tomato relish. It wasn't brilliant but it was ok. 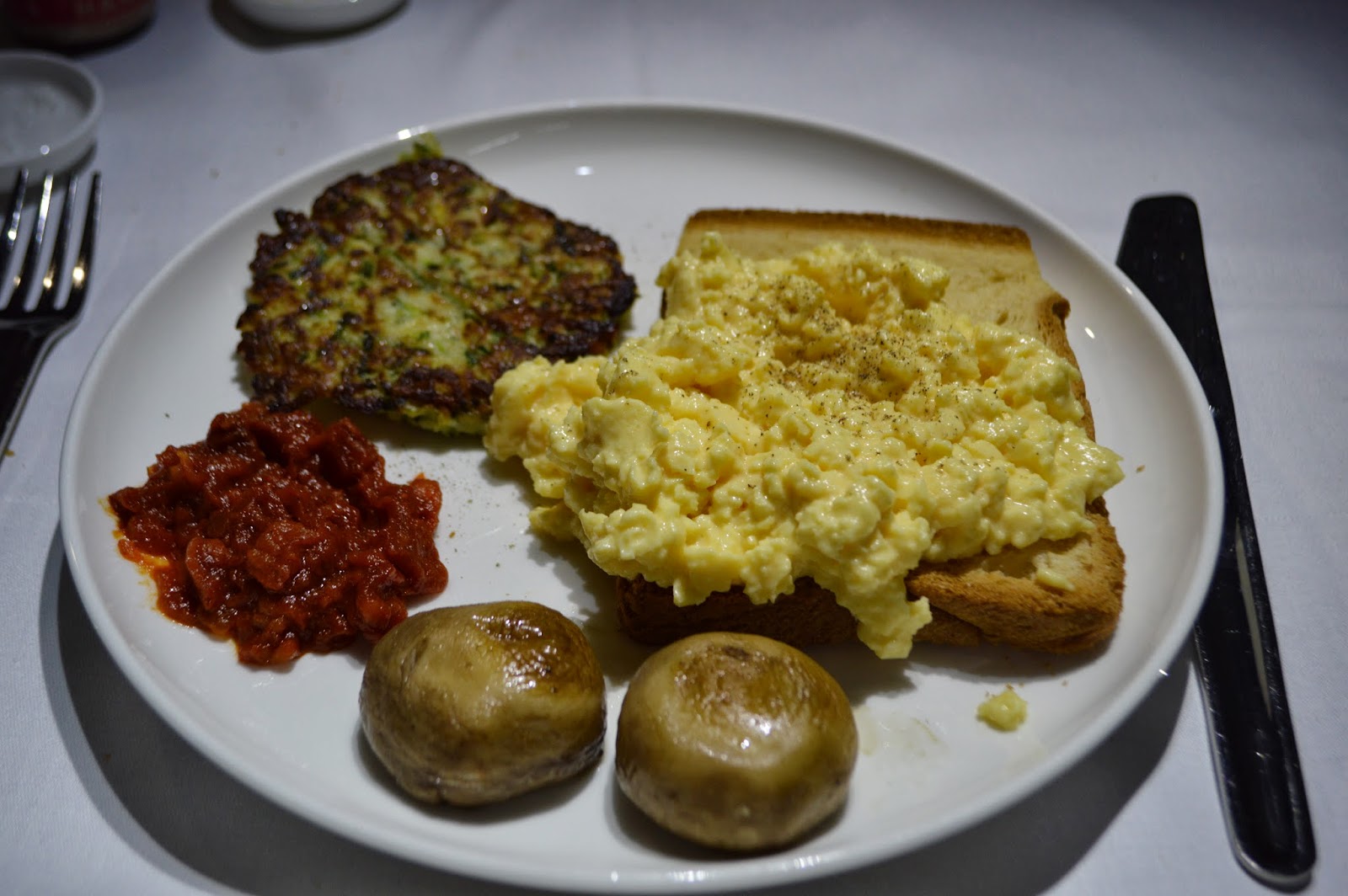 And I had at least 2 cappuccino's as well. I know they are made in a machine but they are still pretty good for airplane coffee! 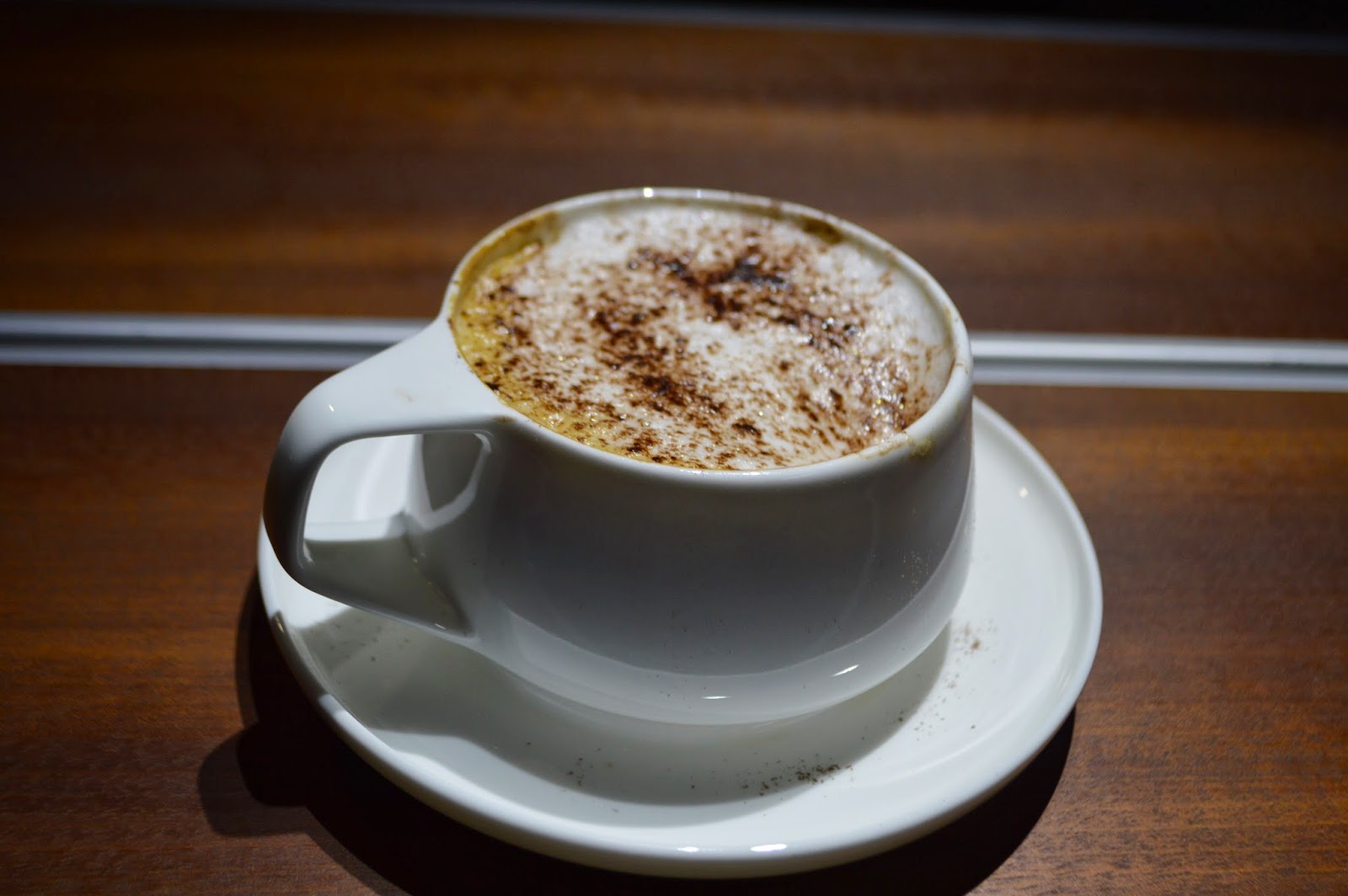 It was time to get changed back into my normal clothes before landing. I headed to the lavatory and freshened up by brushing my teeth and using some of the SKII products from the amenity kit on my face. It helps but it's at this point I was wishing the Emirates shower facility was offered on Qantas A380s!

I got back to my seat and was handed an express immigration card. As it turned out I did not need it as we were first off the plane and there was no queue at all after landing. It's good to have though, 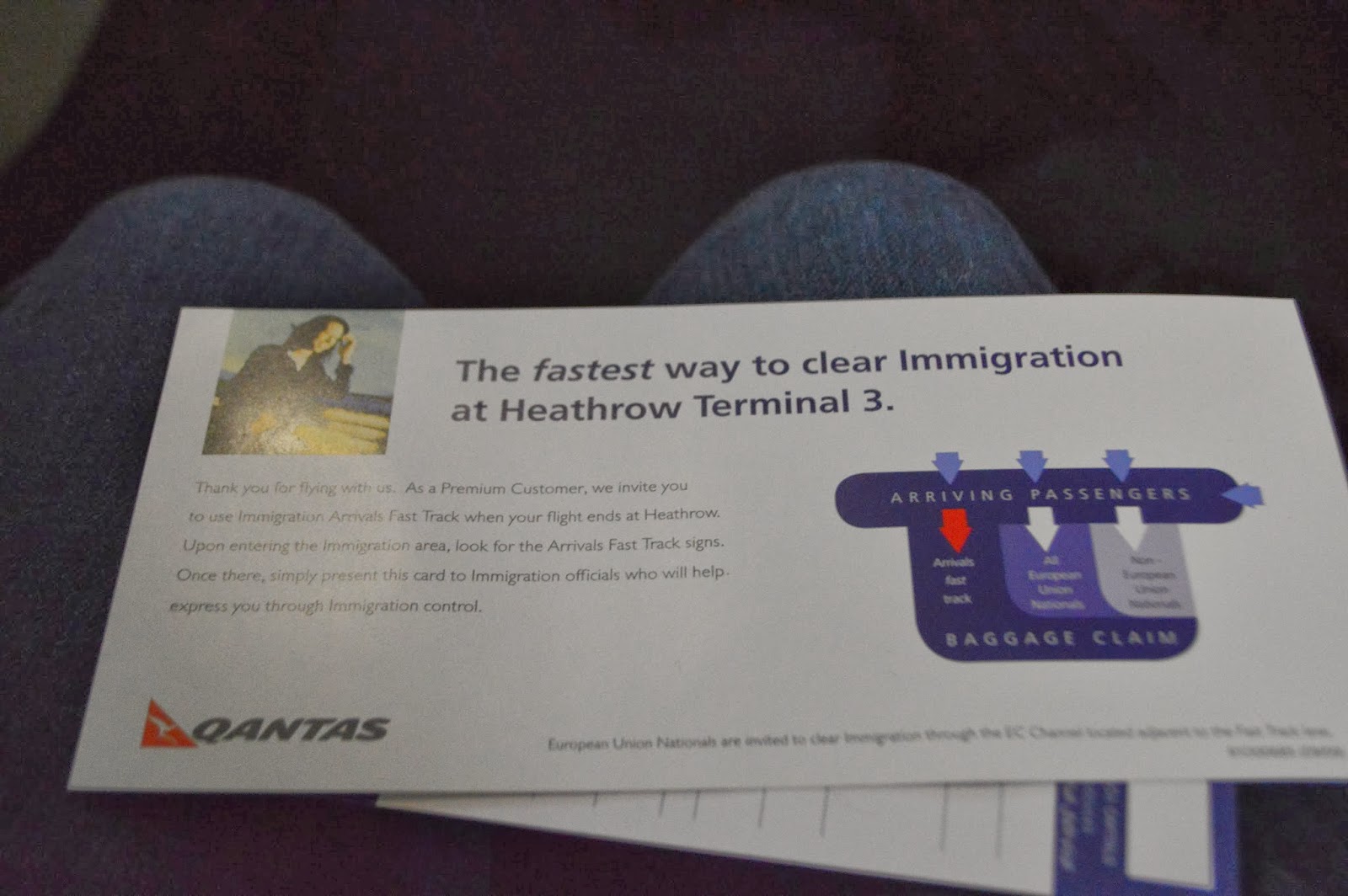 The flight was scheduled to land at 5.10am, just after Heathrow's curfew ends. But as we were running a little ahead of schedule the captain announced a short hold to allow us to land at 5.01am.


I activated the tail came to watch the landing on the entertainment screen. And just as the Captain predicted we touched down at 5.01am and I believe we were the first arrival at Heathrow for the day. 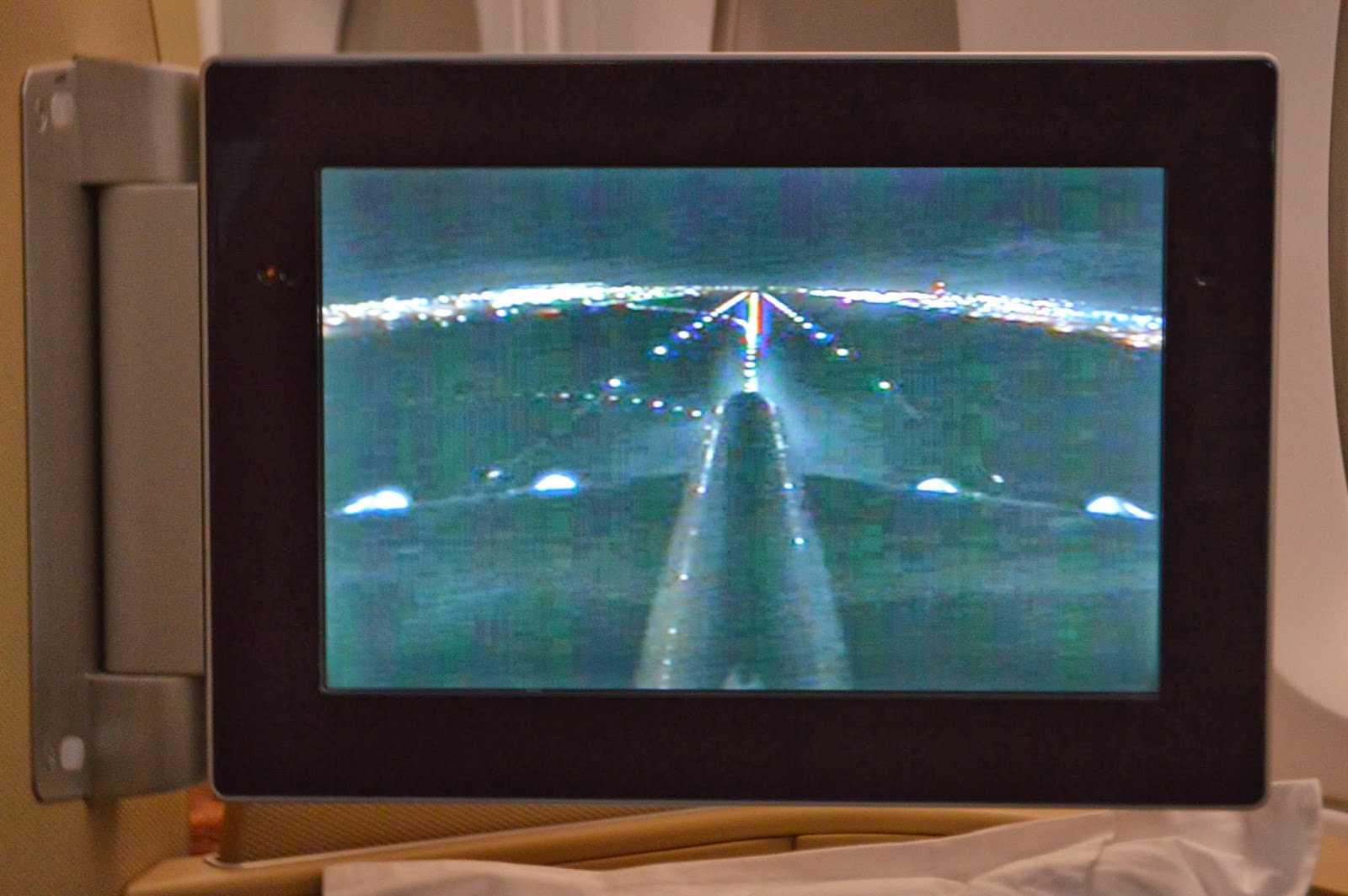 22 hours after leaving Melbourne I had arrived at Heathrow. It was a chilly morning on Boxing Day. After collecting my bags I headed for the Qantas transfers desk and found my driver waiting for me. He whisked me and my bags into the car park  and into a lovely big Mercedes for the trip to the Hilton London Tower Bridge. It was an interesting ride through the dark streets of London as there was barely a soul around. No traffic at all! I do love the included chaffeur service that Qantas introduced after the partnership with Emirates started.

I have to commend the London based cabin crew who operated this sector. They were friendly, polite and eager to please. It can't be easy doing the same flight between London and Dubai every day but they have perfected it and did a great job.

Overall it was a very pleasant way of travelling between Melbourne and London and there are many many ways of doing it. This would  have to be in the top 3 though. The top 3 in my opinion are Singapore Airlines, Emirates and Qantas. Which is best? Well I have flown on all 3 with their first class A380 product and to be honest each has its pluses and minuses. I'm not going to rank them since I love them all! I think the only other carrier offering First on this city pair would be Etihad and I haven't tried them yet but I hope to one day.