- January 27, 2014
Qantaslink have recently acquired some used Boeing 717's that they have reconfigured into a 98 economy and 12 business class layout. They are going to be replacing the Boeing 737-400's used on flights between Canberra and Sydney, Melbourne and Brisbane. In addition they will also operate all Qantas services between Hobart and both Sydney (daily) and Melbourne (4 daily). This is the first time that Qantaslink have operated a business class.

I had an opportunity this week to sample the service on a short evening flight between Sydney and Canberra on VH-YQS, a 10 year old Boeing 717 which originally was delivered new to Midwest Airlines in the USA back in 2004. In 2009 it went to Mexico for service with Click Mexicana, a low cost division of Mexicana. But they went bust in 2010 and the aircraft was stored. When it came time for Qantaslink to source some new B717's they found this one and did a full refurb.  So let's have a look what it's like:


The aircraft was ready to go at the Qantas domestic terminal's gate 9 at Sydney when I arrived from the  lounge. After taking a snap I headed to the priority boarding  queue and was greeted and got a 'welcome back' due to my Qantas platinum status showing on  the boarding pass. Once on board I got another welcome back and directed to seat 1A. The aircraft is fitted with 12 seats in business, in a 2x2 arrangement. Economy is in a 2x3 arrangement. 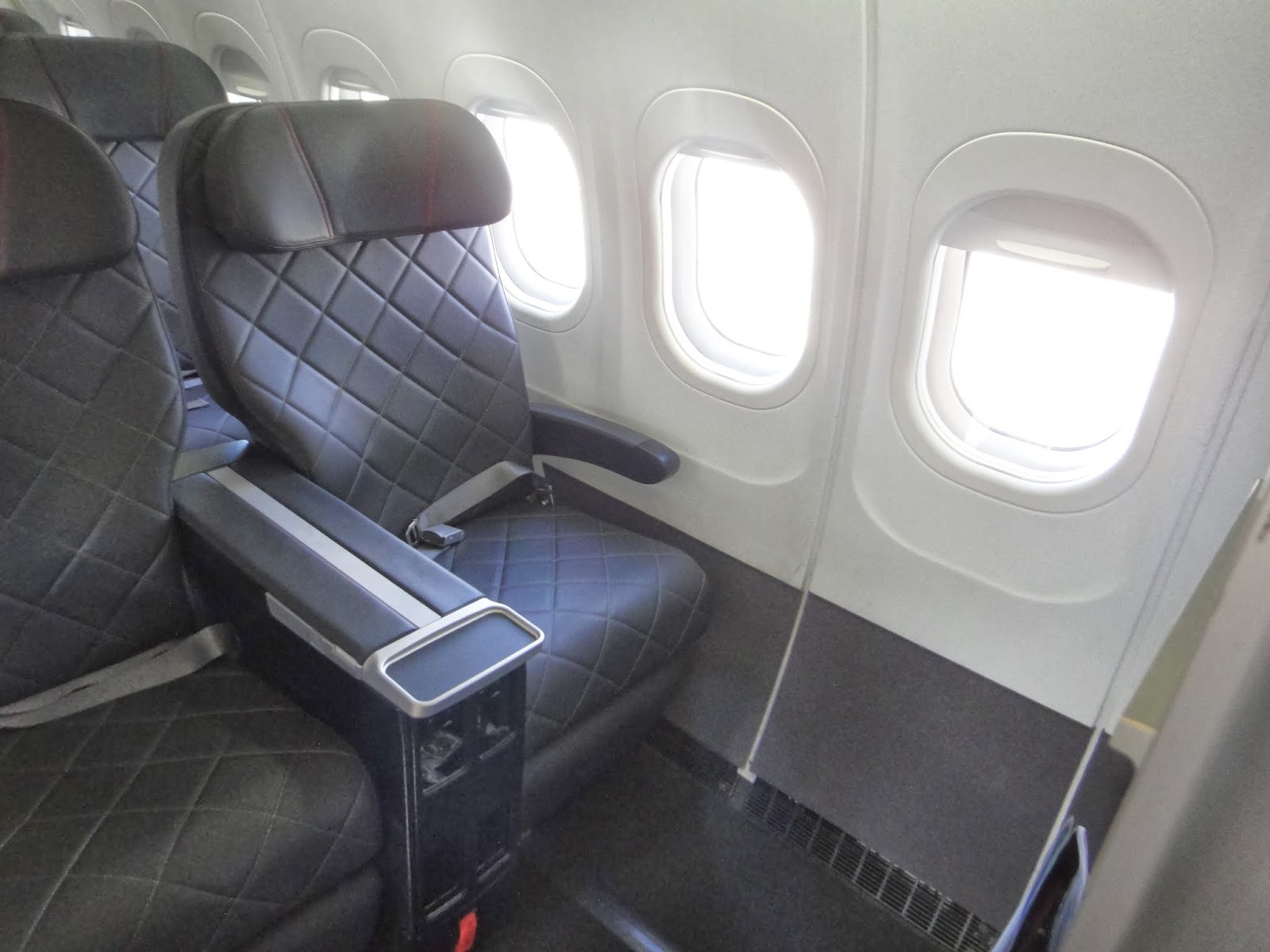 I  was impressed by the leather seats and the legroom in the bulkhead was fabulous. Better than that offered on Qantas mainline Boeing 737-800's. First impressions were very good, and the cabin crew had a younger look compared to those on mainline Qantas flights. I was interested to see if they would live up to my experiences with Qantas. The cabin crew member looking after business class was named Andre and he soon came over and introduced himself and offered juice or water as a pre-departure drink. 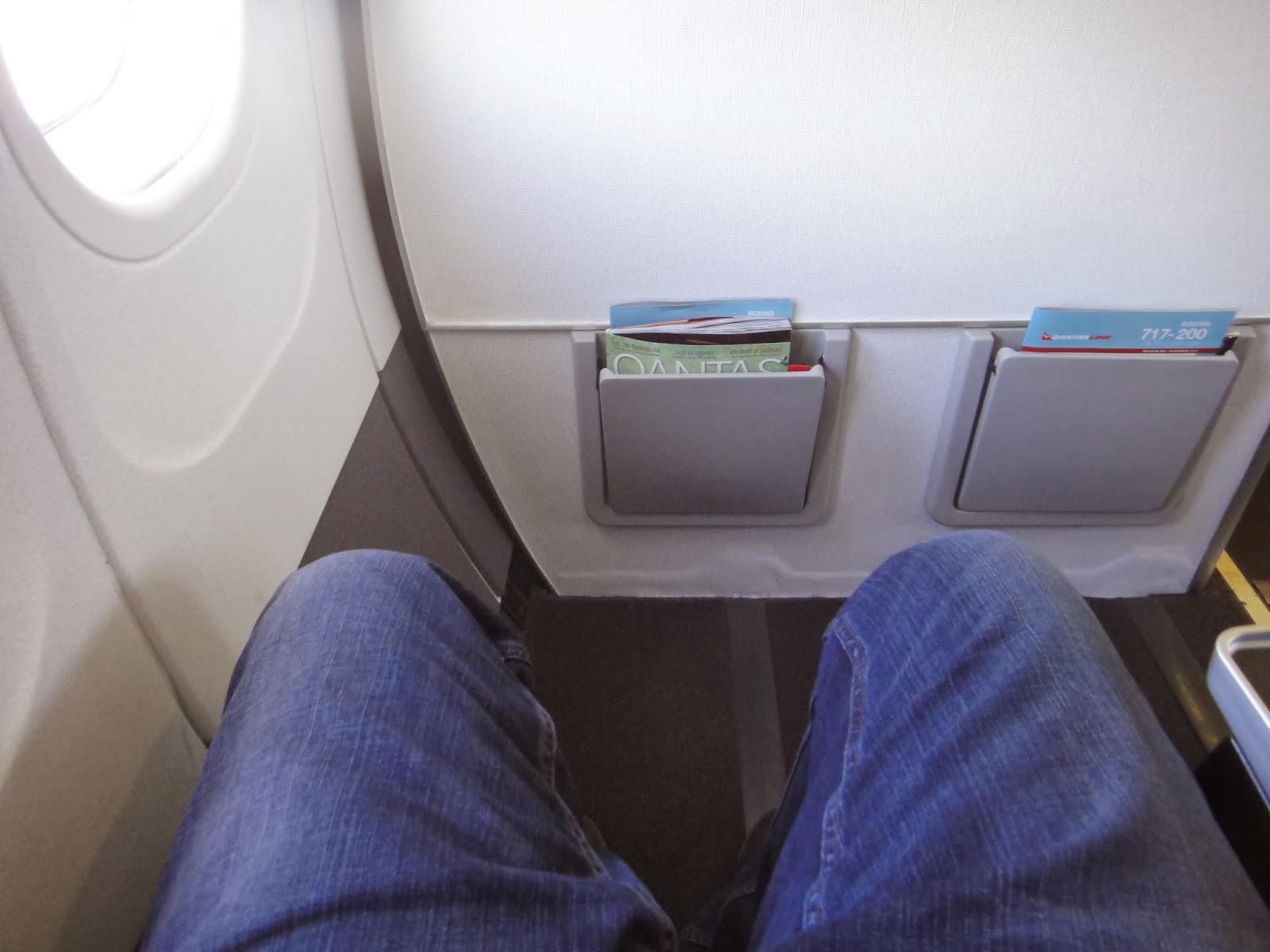 We were boarded ahead of schedule but the captain announced a delay in pushing back due to congestion at Sydney Airport. Eventually though we were underway and the rear mounted engines sprung to life although once started they are almost unable to be heard from row 1. The departure was from the furthermost runway 34R which meant a 10 minute taxi then takeoff to the north before a left hand turn out to sea and setting course towards Woolongong. 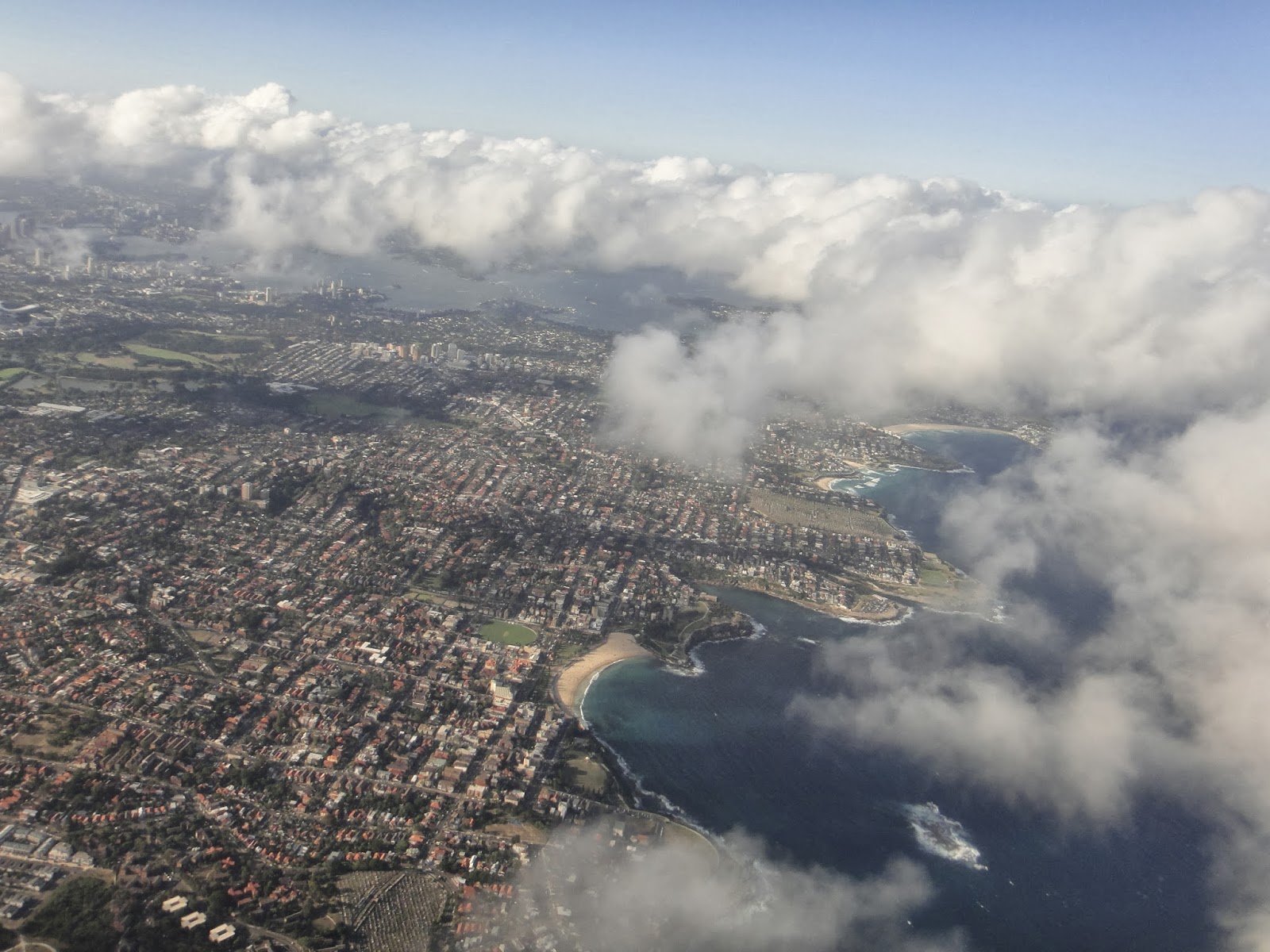 The Captain released the cabin crew fairly quickly to commence inflight service although the seatbelt sign remained on. The flight was due to be 33 minutes today which means there is very little time for the service. Andre got his trolley set up quickly though and was in the aisle offering us the seared tuna meal which was the only option. It came with an orange cake and bottle of water plus offering of any other beverage. I had an Adelaide Hills Sauvignon Blanc.

It is worth noting too that there is an iPad in every seat offering wireless streaming inflight entertainment although there is very little time to use it on  this sector. The seat itself is comfortable and reclines but there is no leg/foot rest. There is no time to relax on this sector anyway. 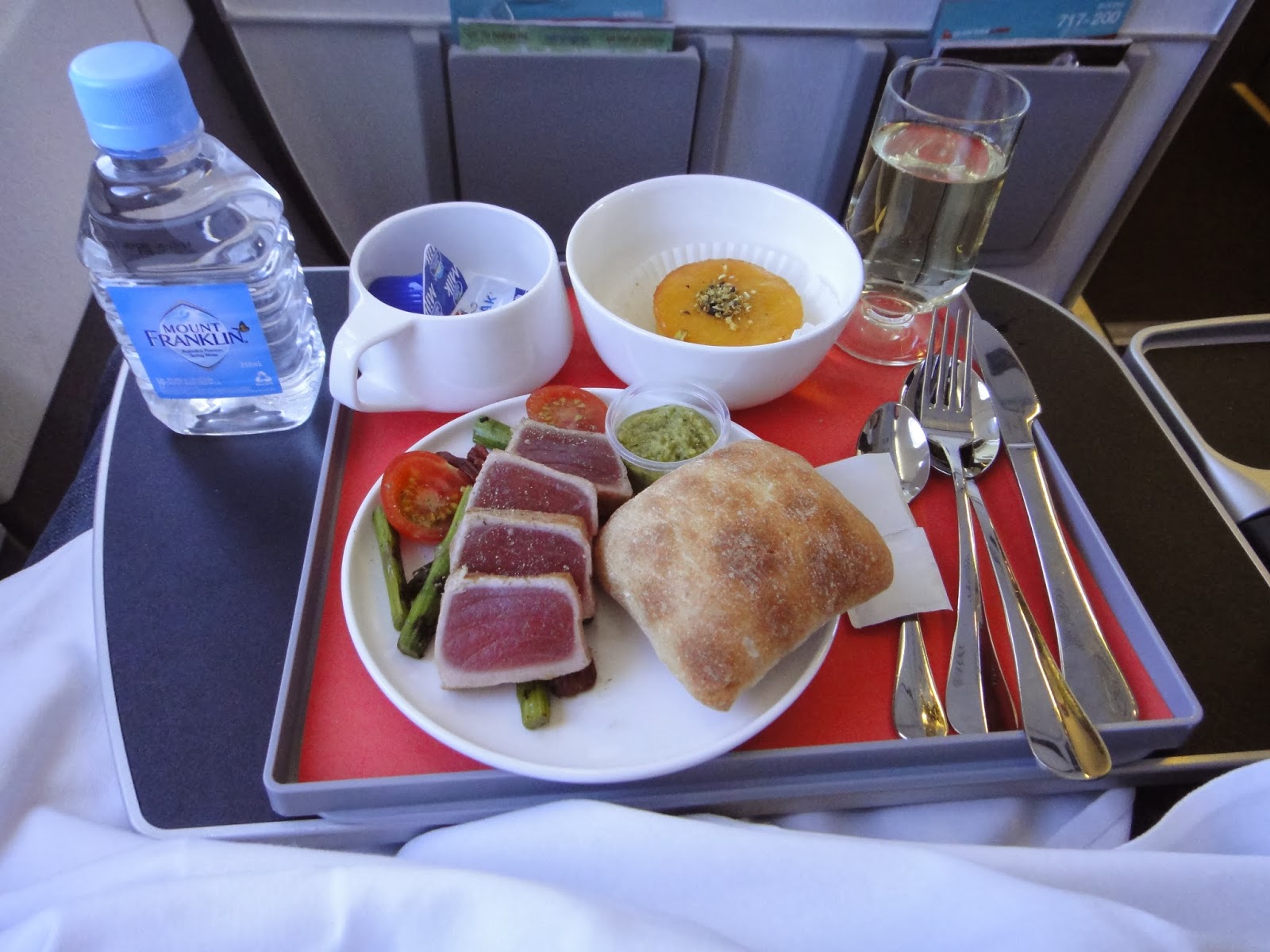 The meal is ample for such a short flight and it was very tasty! The bread had been warmed up too which I like.  A second crew member came around with tea and coffee which I declined. By the time my food was finished we were already in the descent but I had time for a refill on my wine and a quick visit to the forward lavatory.

The weather was great although there was a little clear air turbulence on approach. The seat belt sign was illuminated and a few minutes later we had a smooth touch  down in Canberra. We pulled up at a remote stand so stairs were used to disembark across the tarmac and into the recently rebuilt Canberra airport terminal. Here is a final shot of the cabin: 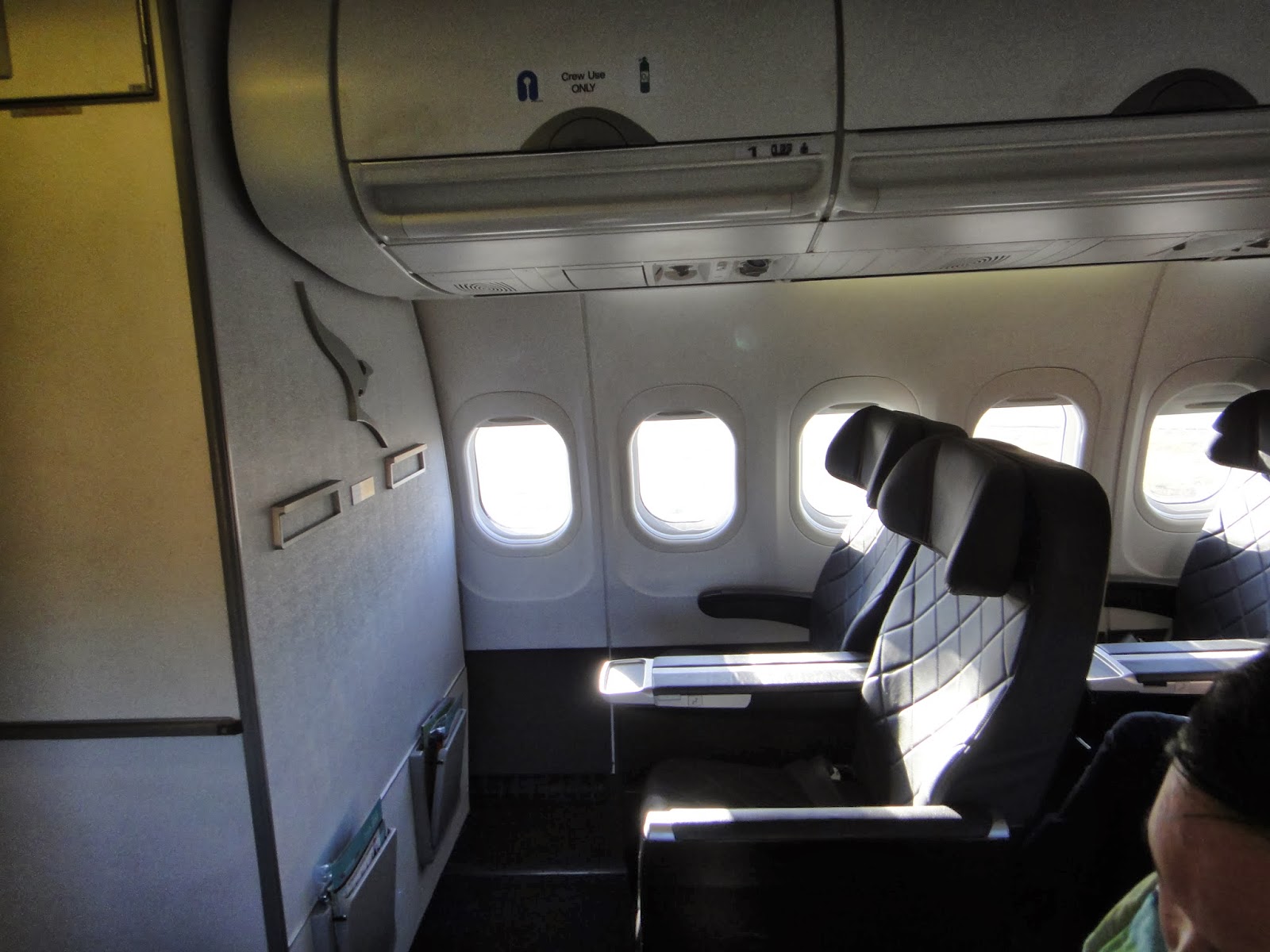 So did Qantaslink  live up to my expectations? ABSOLUTELY YES. I love the Boeing 717, it's a really nice size, the seats are very comfortable and the crew young, efficient and friendly. They have  already polished their service skills after having had business class only a few months. Good job Qantaslink and I look forward to using these services again in the near future.