- May 19, 2014
A quick report here on what you can expect in business class domestically in Thailand. This trip was on TG110 from Bangkok Suvarnabhumi to Chiang Mai on the Airbus A330-300. The aircraft operating the flight was HS-TEJ, a 16 year old model configured with the regional business class recliner seats. The flight was due to depart at 1.10pm and arrive into Chiang Mai at 2.20pm.

My trip started with the taxi driver taking the long way around the back of the airport, which was fine by me as I like the view:


Check-in was quick at the domestic Royal Silk class counters. Bags were given priority tags and sent on their way down the belt. My boarding pass issued it was time to head through security and on to the domestic lounge. It's a basic lounge with non-alcoholic beverages and some dim sum, pastries, cup noodles and a few other snack items. There is no shower facility but there is a toilet facility within the lounge. Don't forget to monitor the time because there are no boarding announcements.

After a quick visit in the lounge it was down to the gate where HS-TEJ was just about to commence boarding: 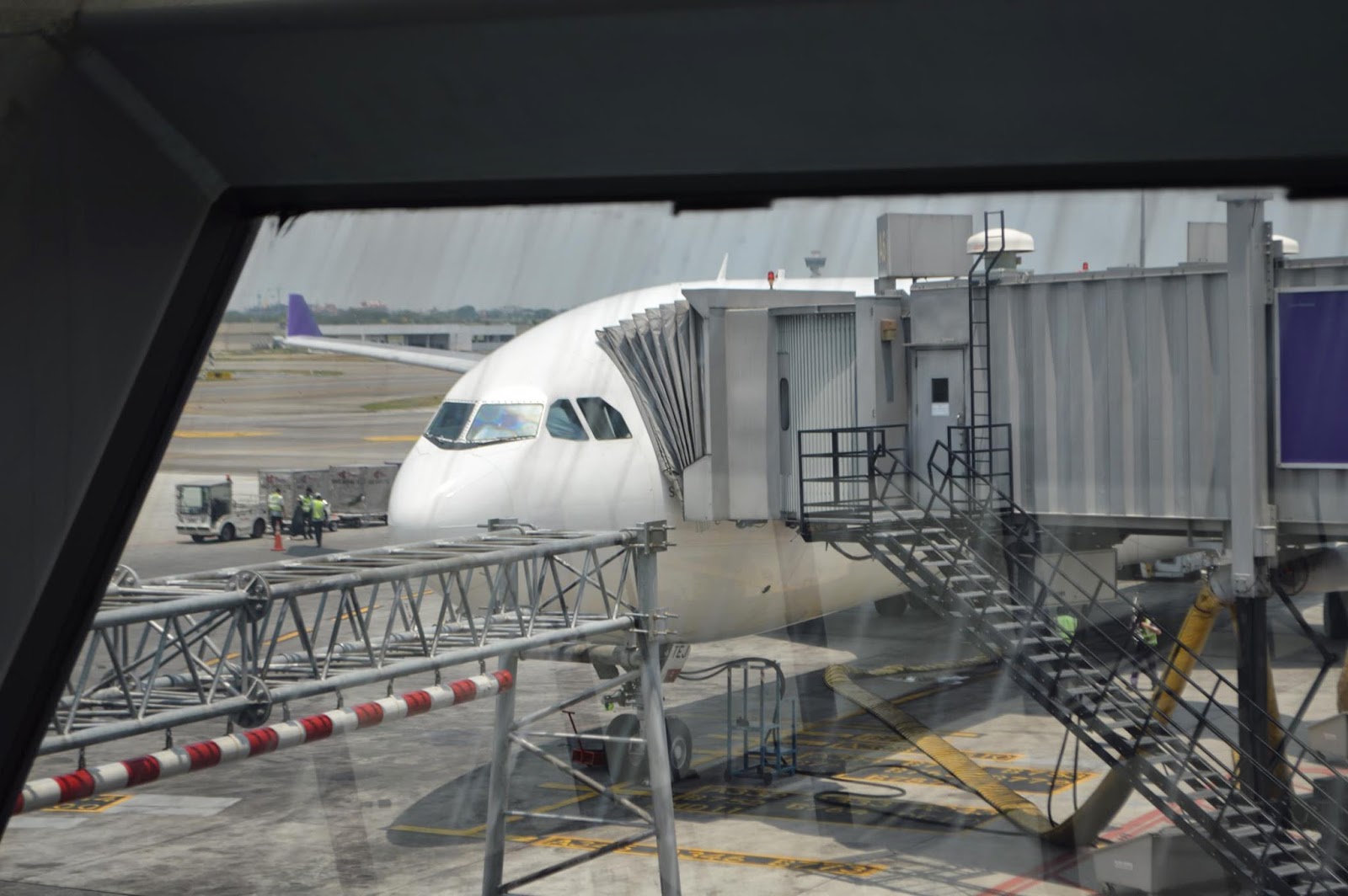 Both door 1L and 2L were in use with Royal Silk passengers using 1L. Once on board I was given a friendly greeting and I headed to seat 22A which was actually in the 5th row of this aircraft. The seats are looking fairly old but they have a good pitch of 49 inches and a decent amount of recline. About 20 out of the 42 seats were occupied by the time we departed. 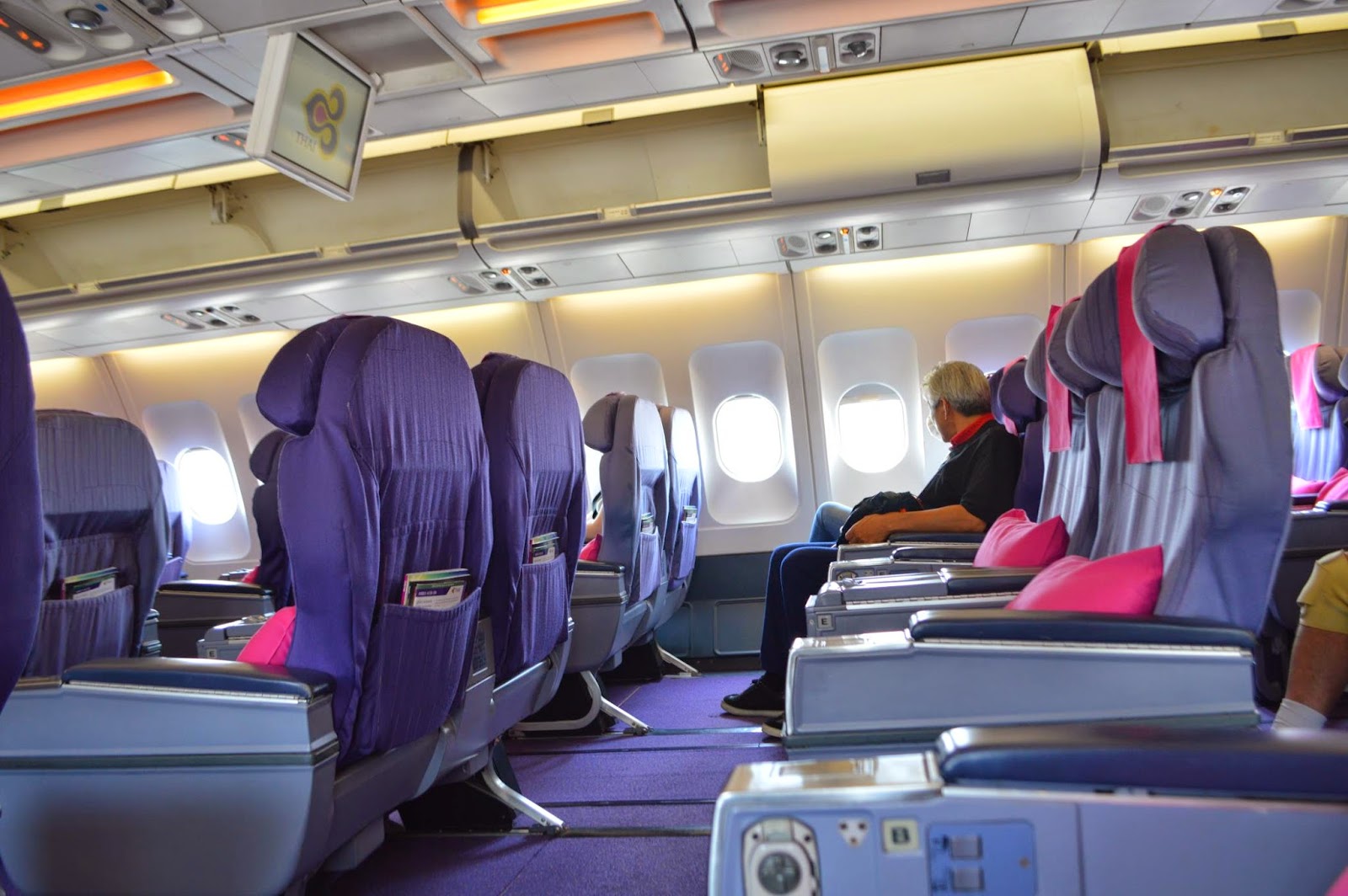 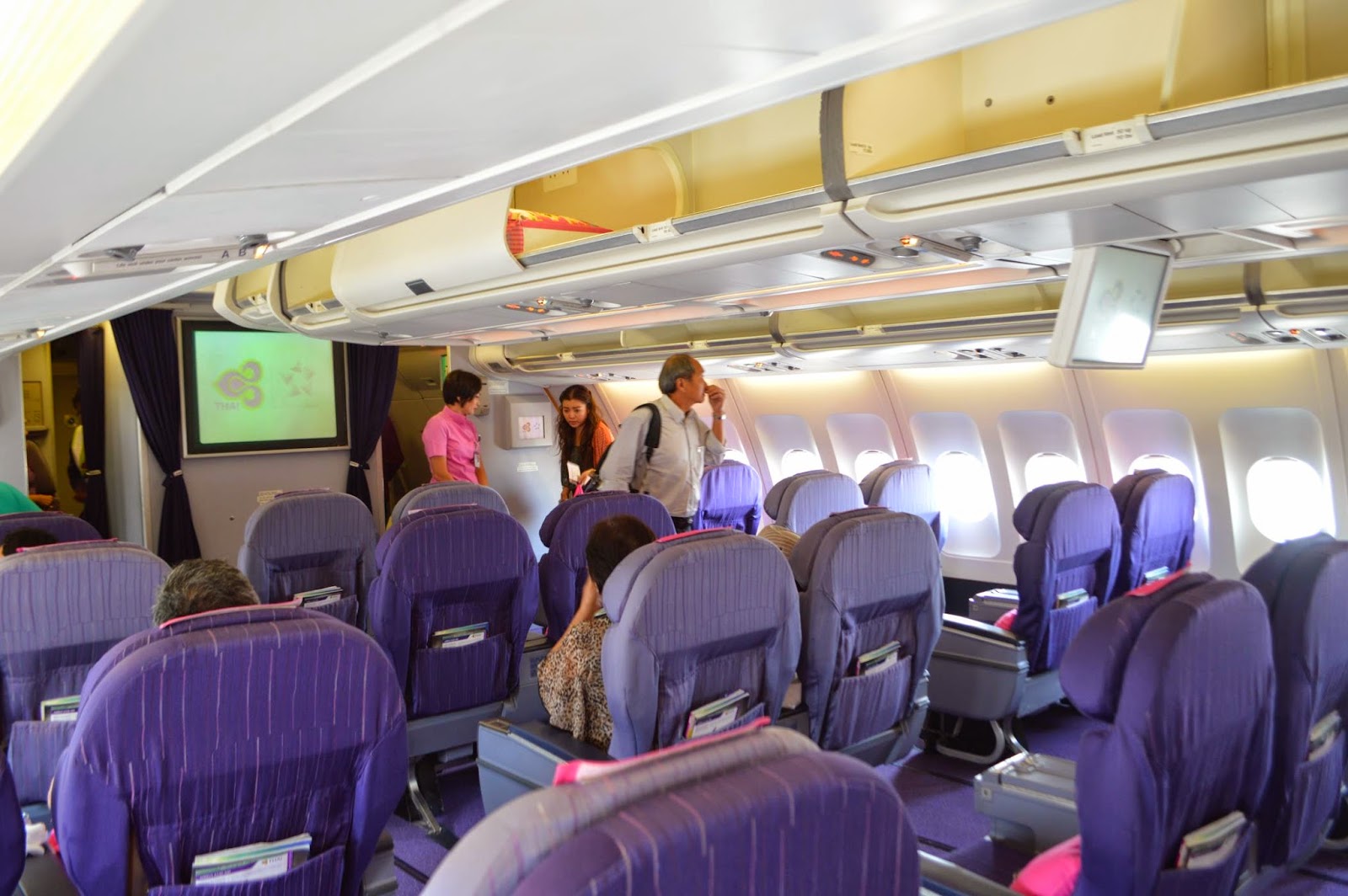 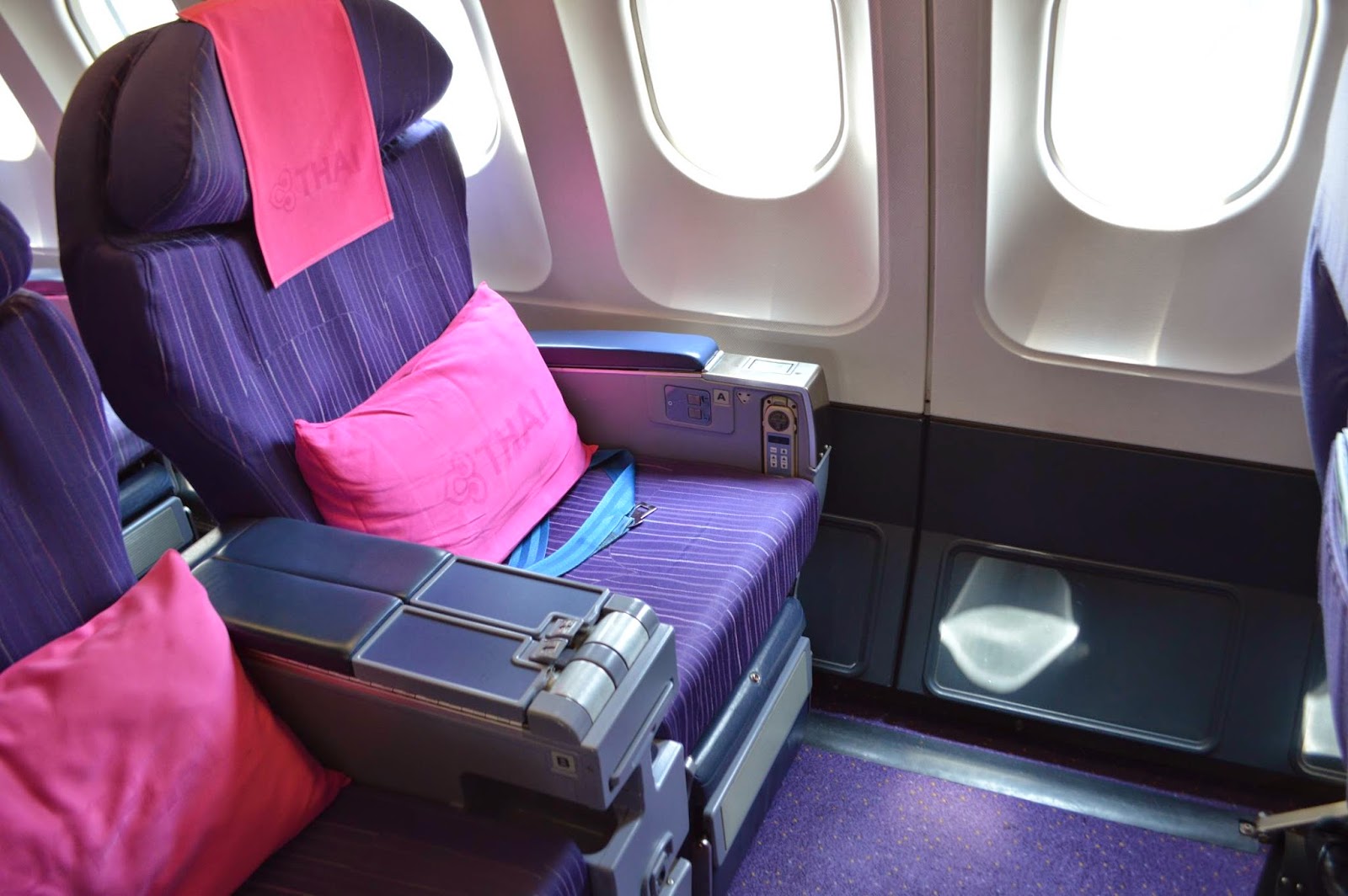 A pillow was placed on each seat and a welcome drink of juice or water was offered, along with a hot towel: 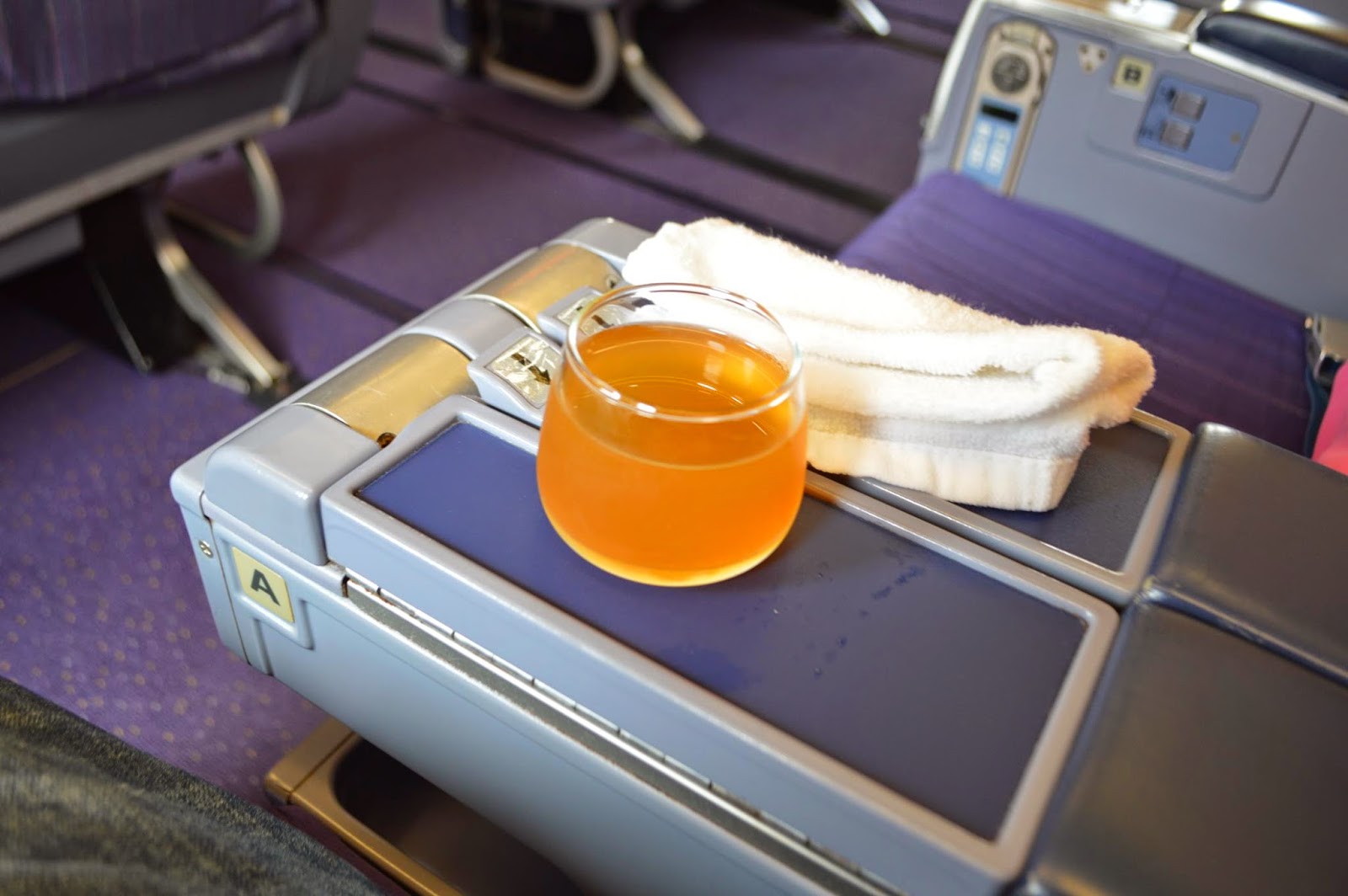 Due to traffic congestion at Suvarnabhumi airport the Captain announced a 15 minute delay to our departure. Unfortunately the American person sitting next to me the wanted to discuss his life story and I was forced to listen.... it never ended until we disembarked in Chiang Mai! He was rather talkative and kind of annoying as I was unable to relax with his never ending chatter and questions.

Fortunately runway 19L was in use for departures so it was a very quick taxi for takeoff and we were soon lifting off into the Bangkok hazy sky. 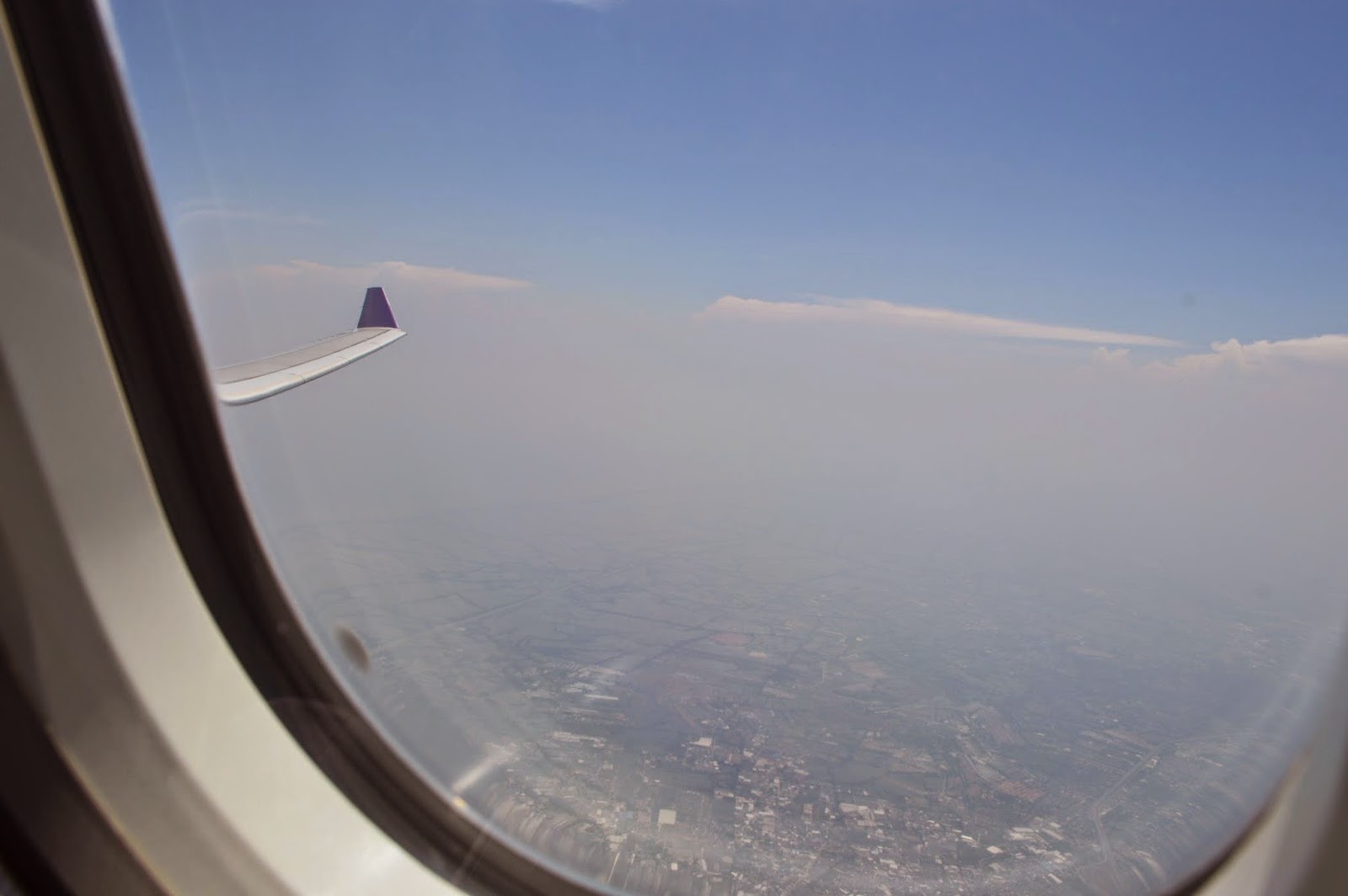 A few right turns and we were soon tracking north west towards Chiang Mai, conditions were good once we were up  above the clouds: 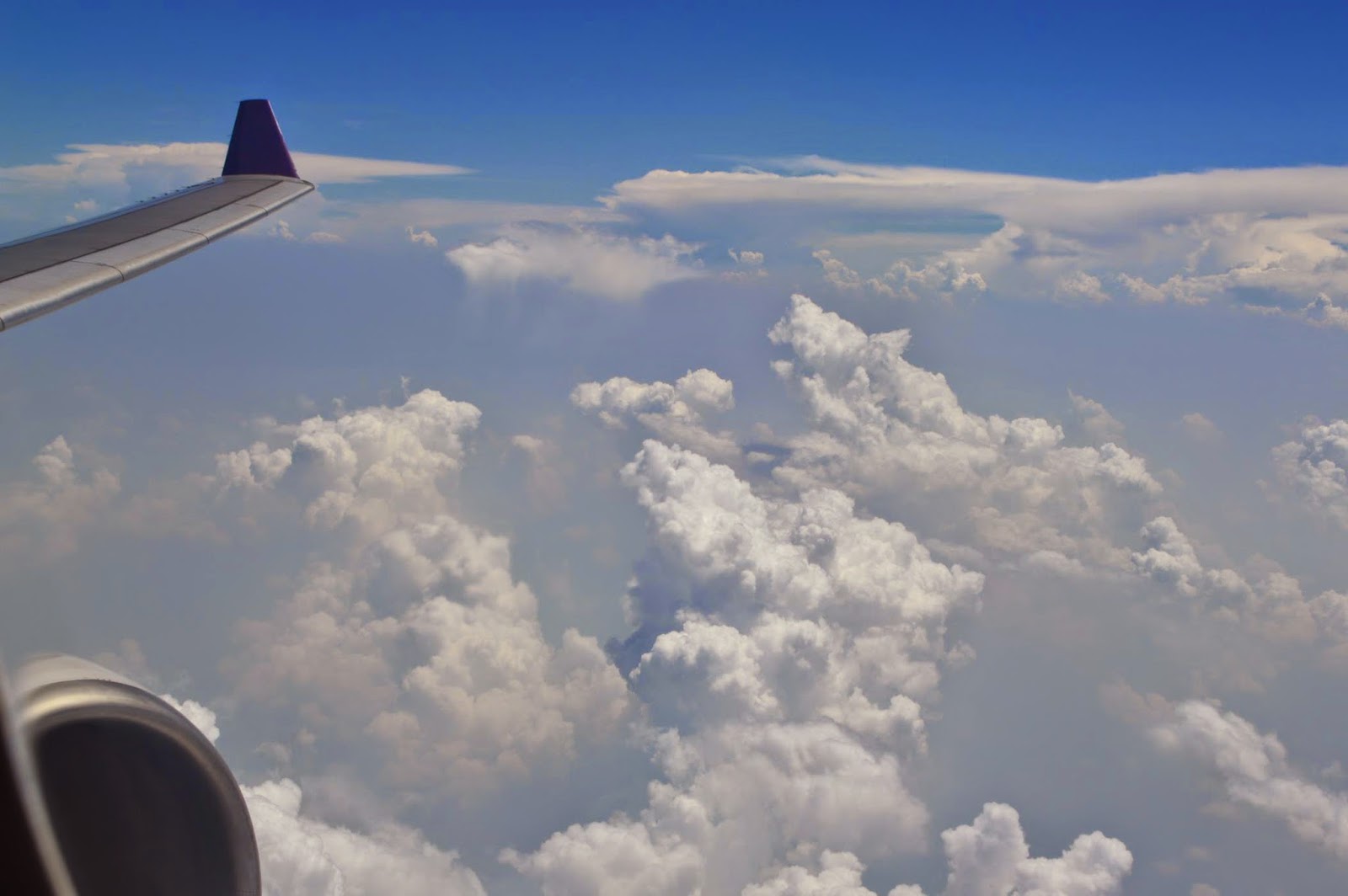 The crew commenced inflight service which included a cold meat and salad dish along with a dessert. The meat was some kind of fish, I initially thought it was chicken and was really horrified when I took a bite and found it was fish. I am not a fan and this meal was awful! Unfortunately there is no choice of meal on domestic flights at all... very disappointing really. At least the coconut pudding style dessert was nice. 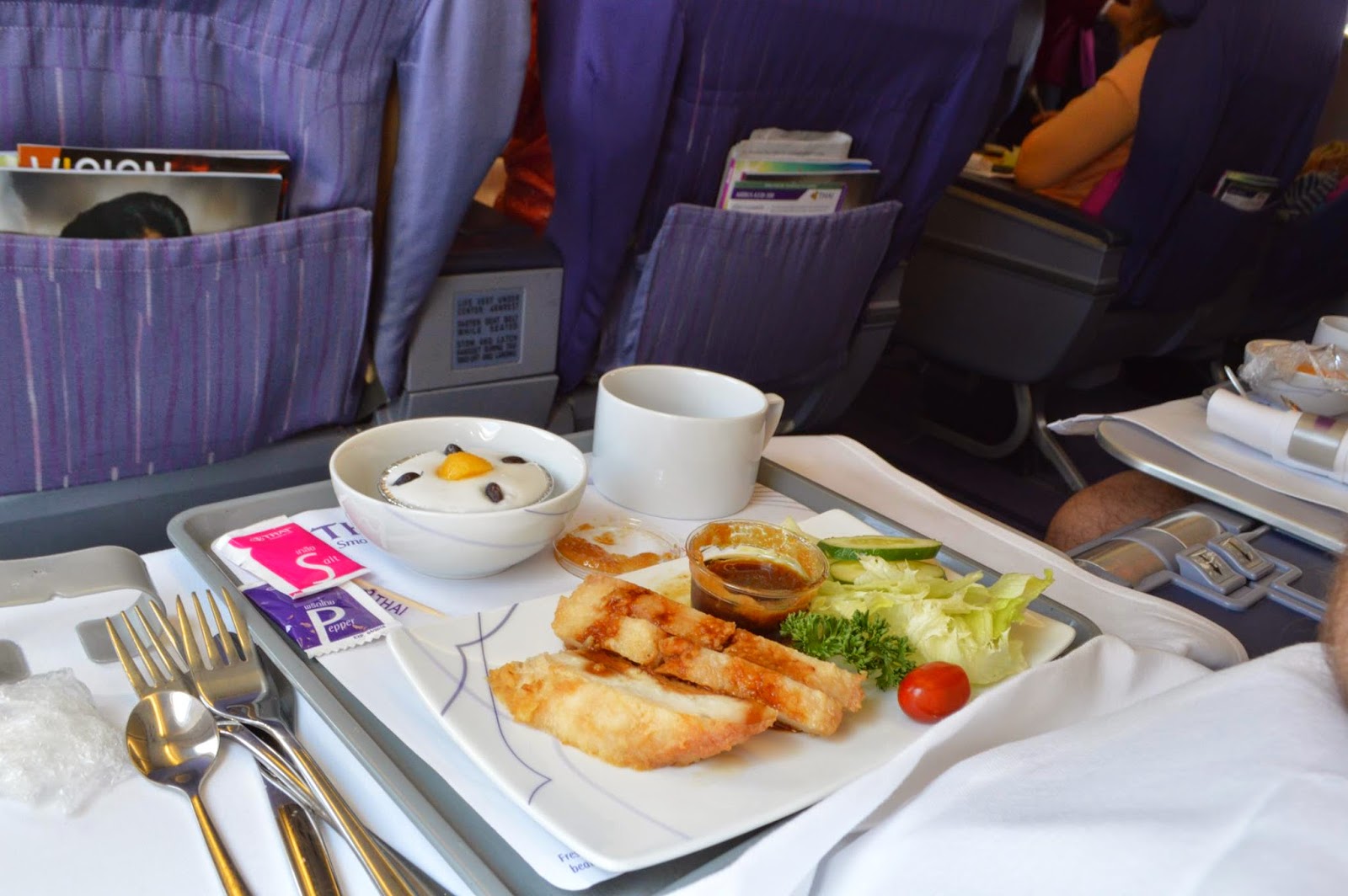 Tea and coffee service was offered and I ordered a coke which came in a tiny glass containing ice and about 3 mouth fulls of coke. I was never offered the can although I could probably have asked for it. Very stingy in my opinion. At no point was I  ever offered a second drink. In general the flight attendants were only barely doing the minimum that was required. No real friendliness at all.

With the disappointing meal cleared away we were soon on descent into Chiang Mai.... 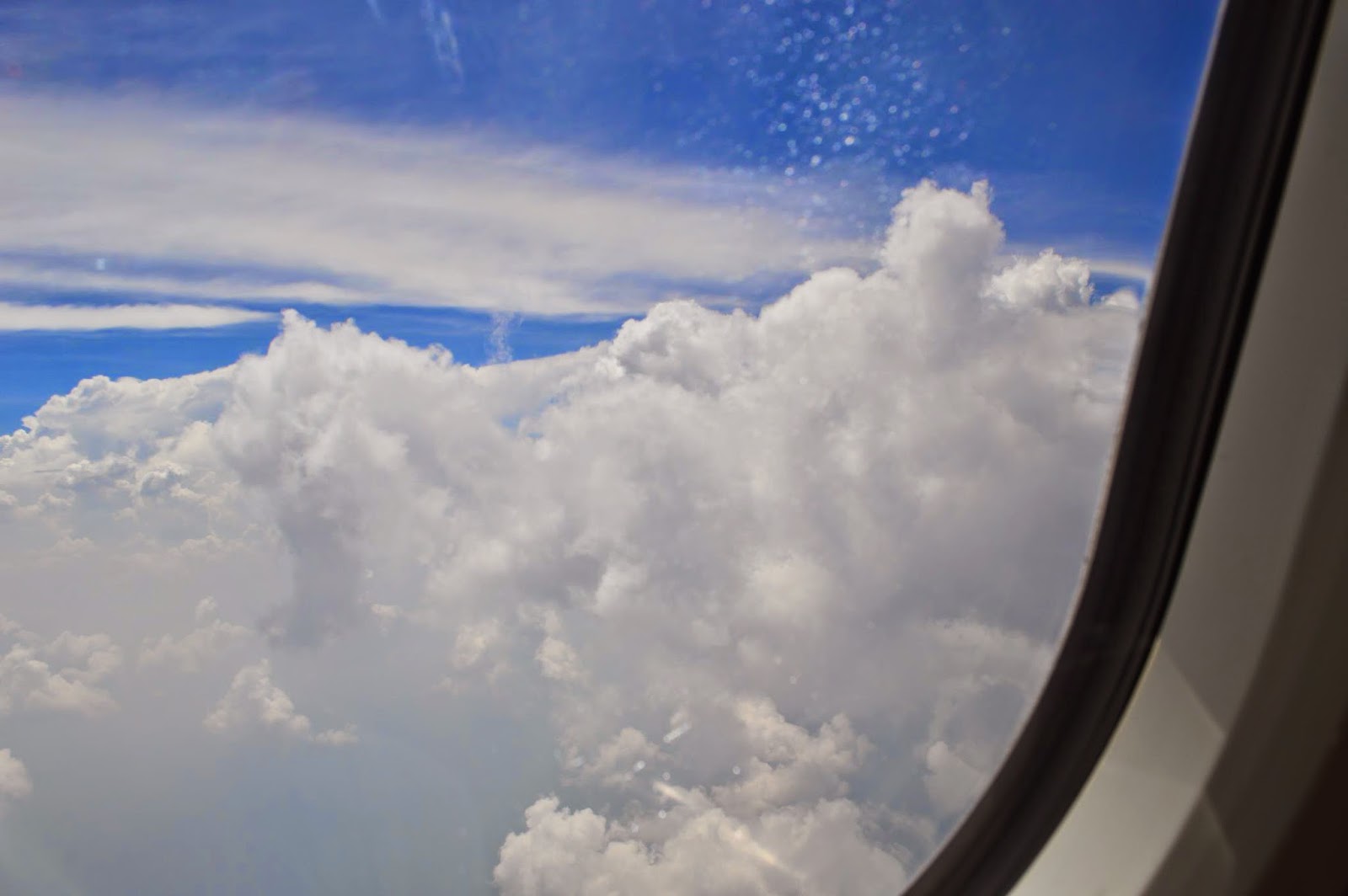 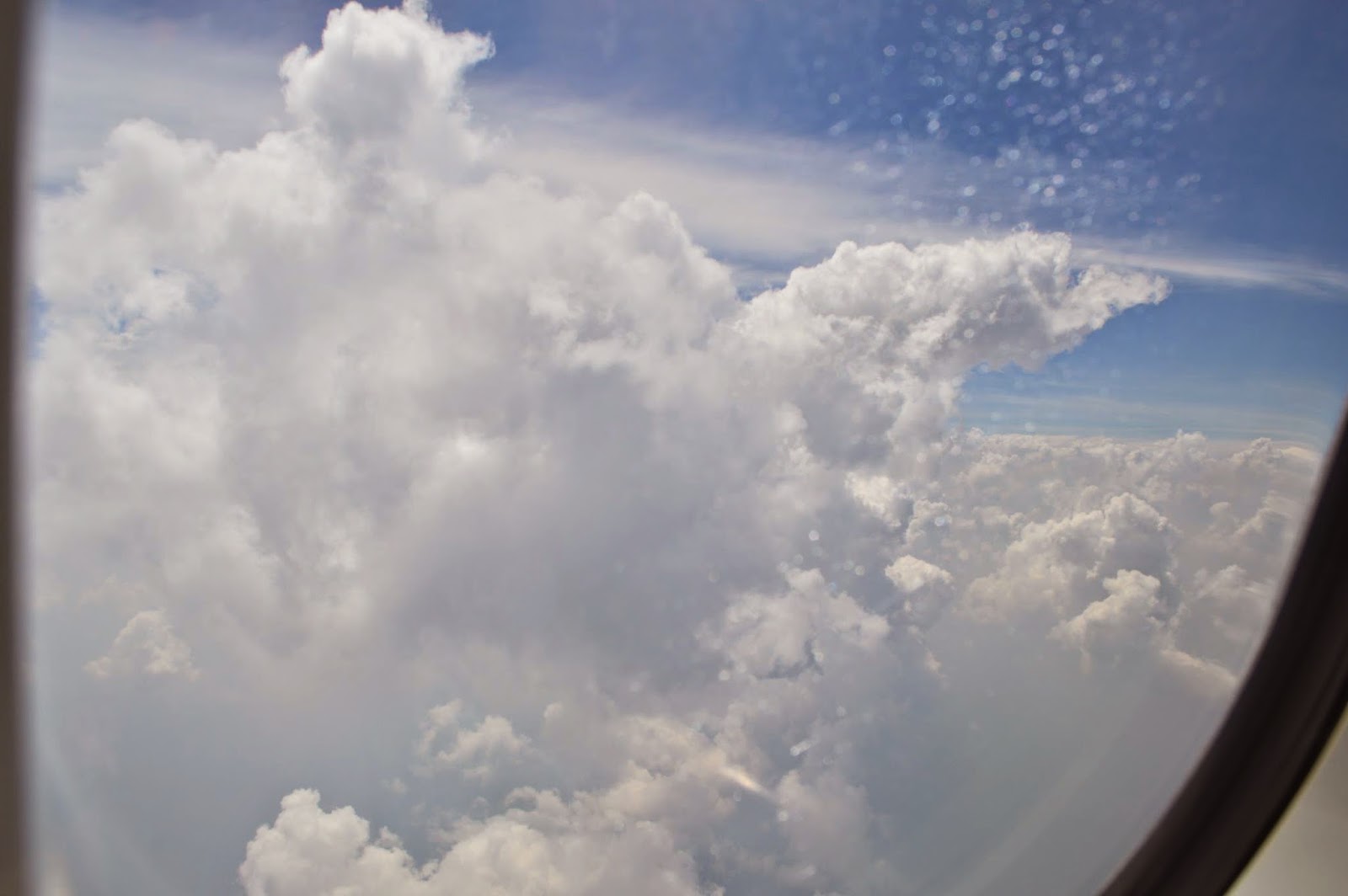 The landing was good and we taxi'ed to a jetway and disembarked... 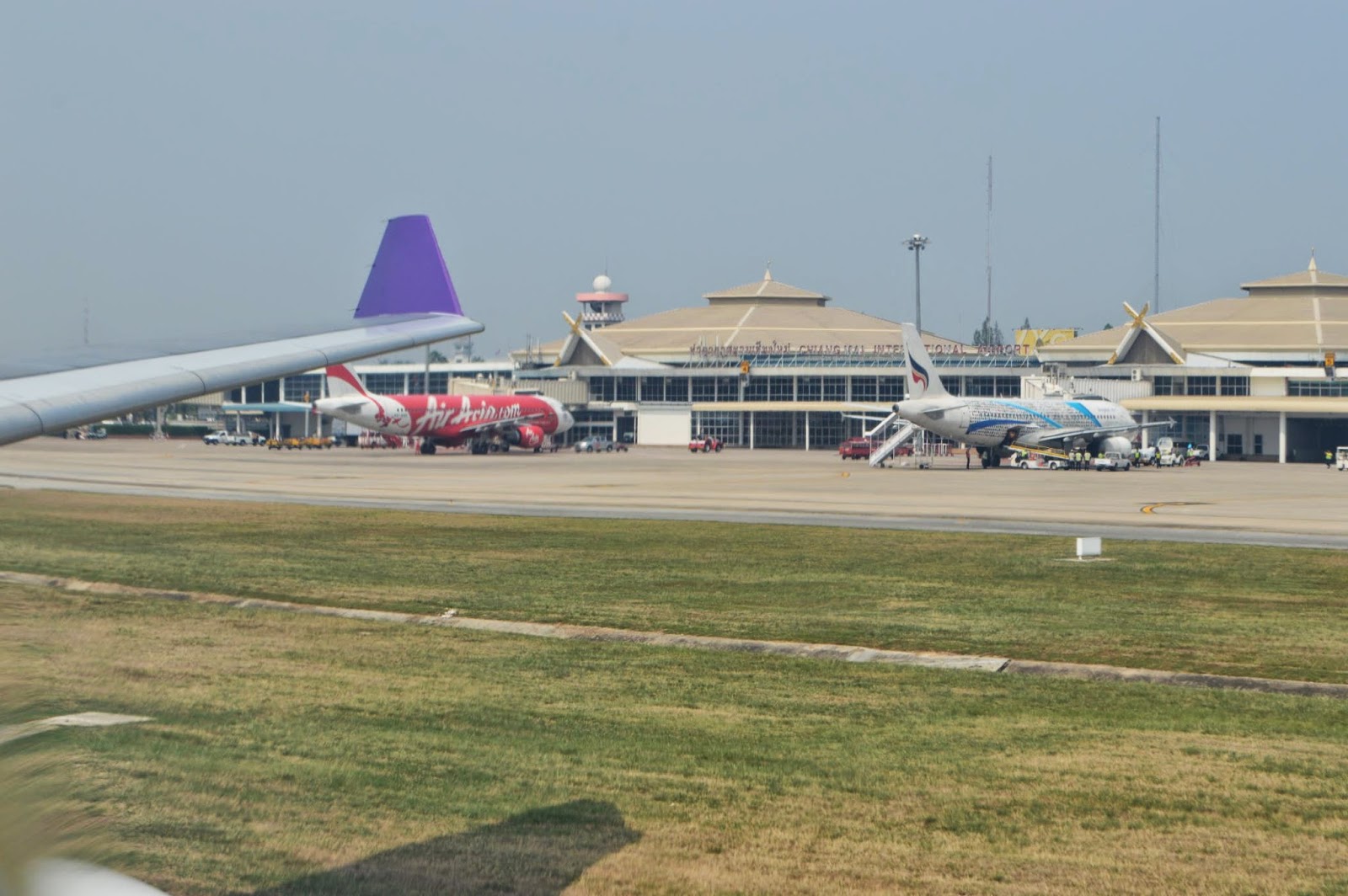 I was comfortable on this flight but the service was ordinary and the food inedible (for me). At least we ran fairly on time, arriving just 10 minutes behind schedule. You do get what you pay for though and these short domestic business class flights can be had for about USD150 each on Thai... quite a good price but maybe not justified if you already have star alliance gold status which gives you lounge access, increased baggage allowance and priority baggage anyway.