- October 20, 2014
The Saab 340 has been on the Australian aviation scene for about 30 years, and it is still going strong. In fact we are home to the world's largest operator of the type, Regional Express, or simply 'Rex'. Rex was created after the collapse of Ansett Australia and is the amalgamation of the former regional airlines 'Hazelton' and  'Kendell'. They fly a fleet of almost 50 of these Saab's to many regional destinations throughout the country. Today I would be flying on the morning service between Melbourne and the NSW regional city of Wagga Wagga.

I arrived at Melbourne's Tullamarine airport around 0800 in anticipation of the 0900 departure time. As I entered the terminal I saw that a delay had been posted on the departures board: 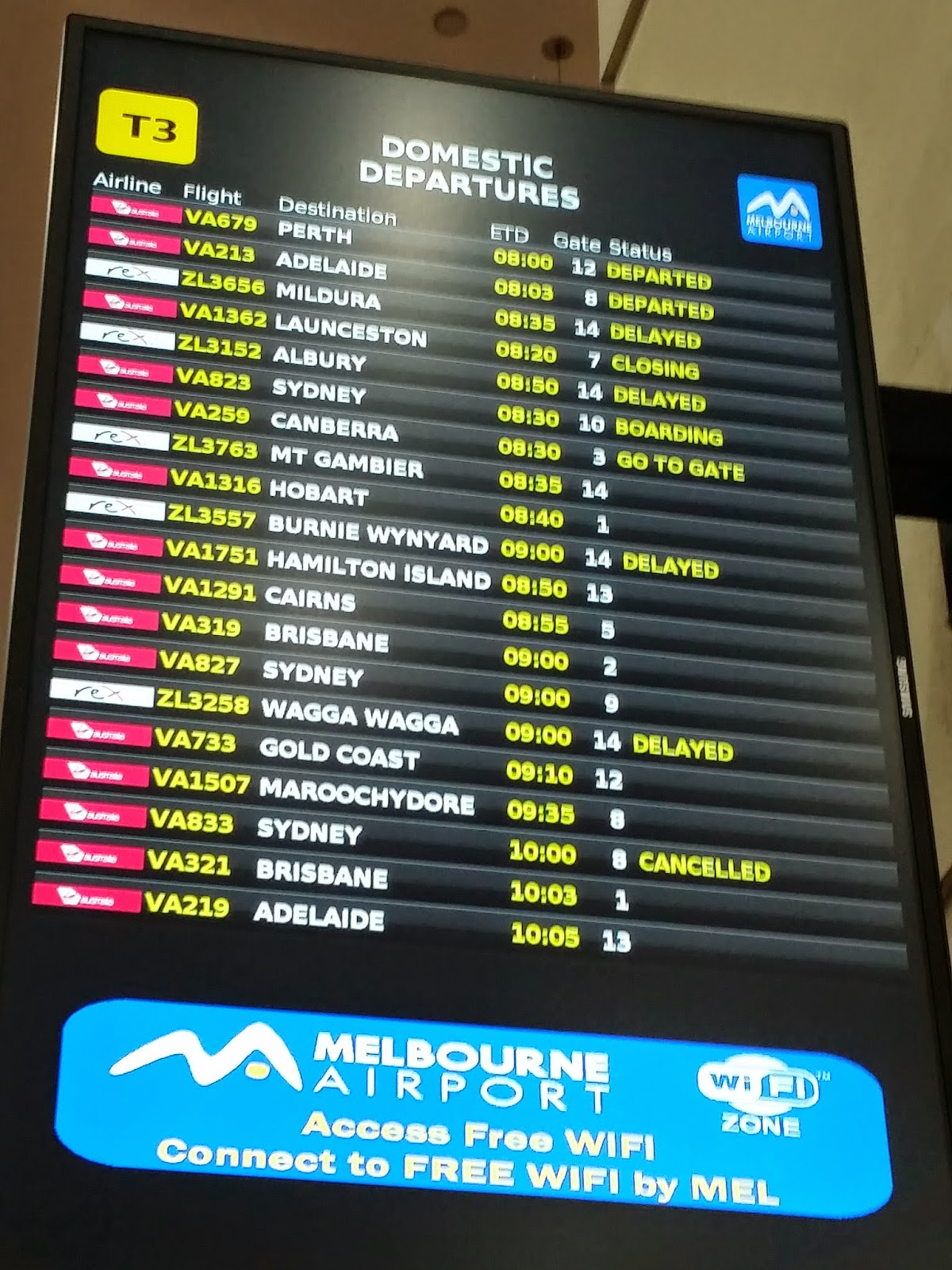 In fat all the Rex flights were showing a delay. As you can see above this is a busy time for Rex with flights to Mildura, Albury, Mt Gambier, Burnie and Wagga Wagga all leaving within 30 minutes of each other.  I grabbed a coffee before making my way down to Gate 14 where the Rex flights depart.


Due to construction works at the airport, Rex aircraft park at remote parking stands and passengers are taken by bus to the aircraft. Once the new terminal is complete I believe the bus will no longer be required.

I had already checked in online and had printed off my own boarding pass: 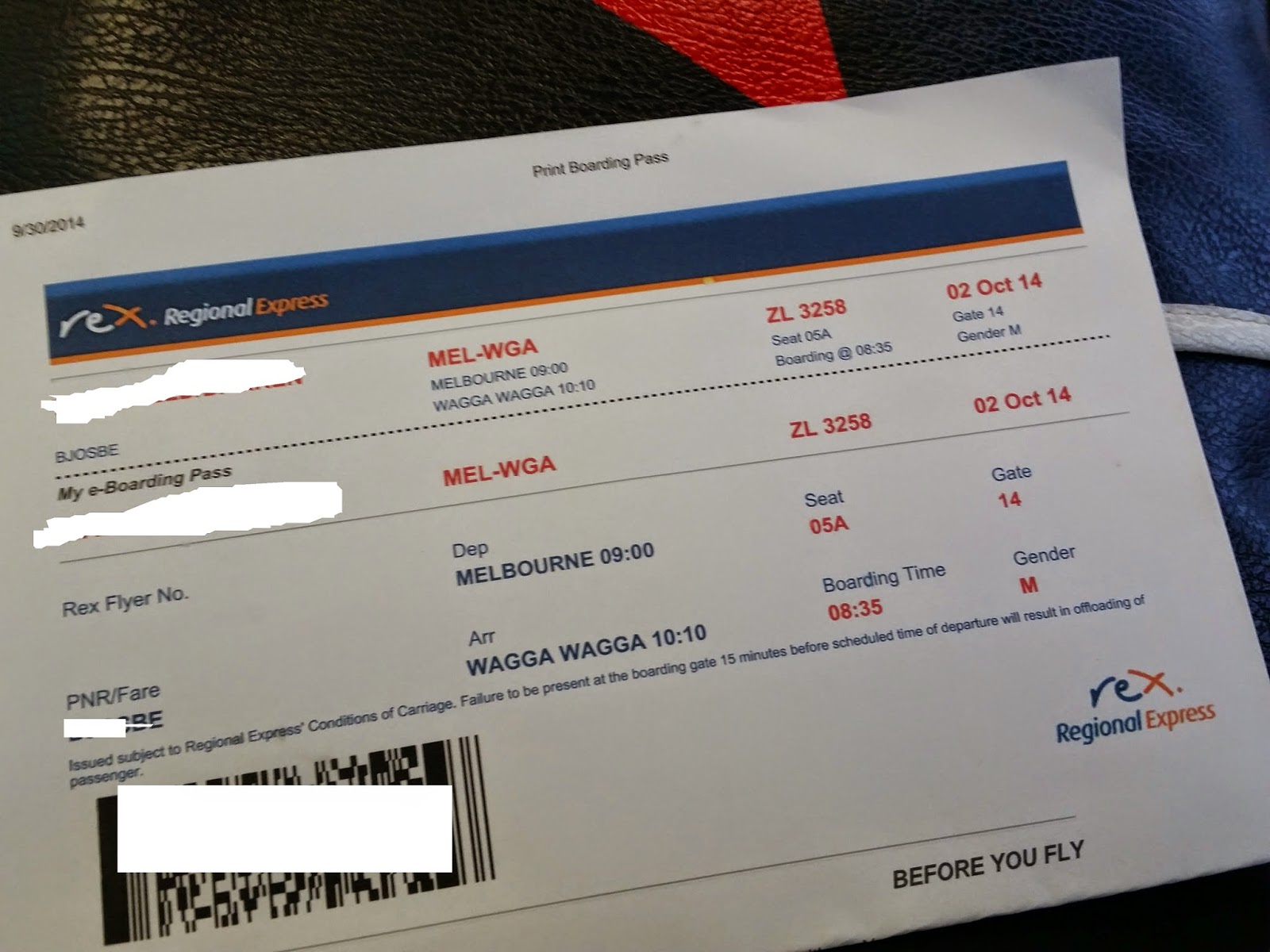 I decided to enquire as to the delay on the flight to Wagga with the friendly gate agent, she advised that the boarding time would be 9am, and the delay was due to Air Traffic Control. True to her word, at about 9am the flight was called for boarding. You must present your photo ID at the gate if you have checked in online. After that was done it was down the escalators and onto the waiting bus. In total I counted just 13 passengers for this sector.

After a short drive we arrived at the aircraft: 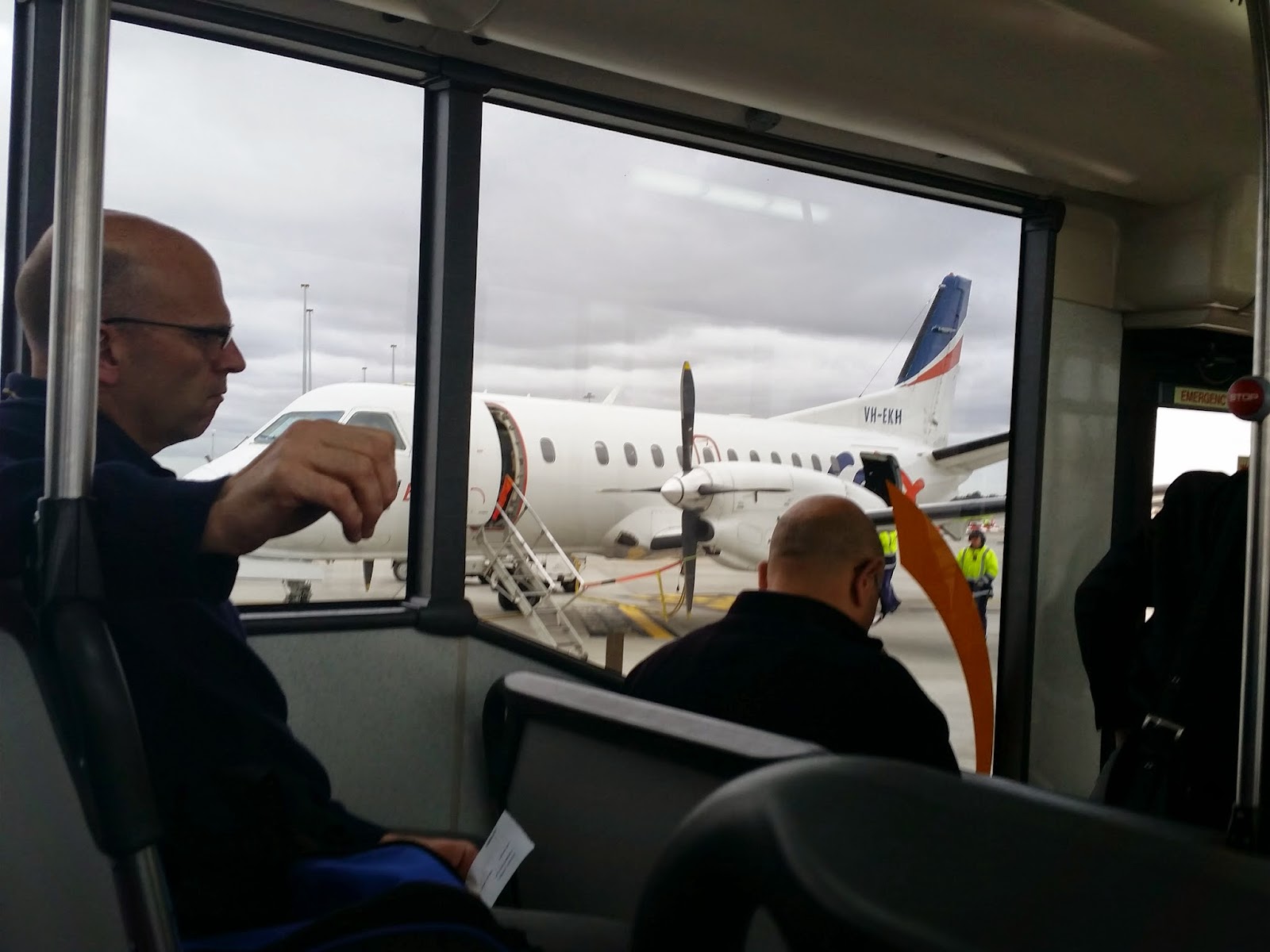 I was feeling very nostalgic boarding this flight, as I have fond memories of flying on Kendell Saab 340's on the Sydney-Wagga route back in the 90s as a teenager, to visit family. In fact this aircraft may have been one of the ones I flew on at that time, as it was delivered new to Kendell back in 1995. The registration was VH-EKH.

With such a light load boarding was finished in a matter of about 2 minutes and the door was soon closed and engines started. I was seated in 5A, one of the single seats on the left. This 35 seat aircraft has a seating configuration of 1 on the left and 2 on the right. 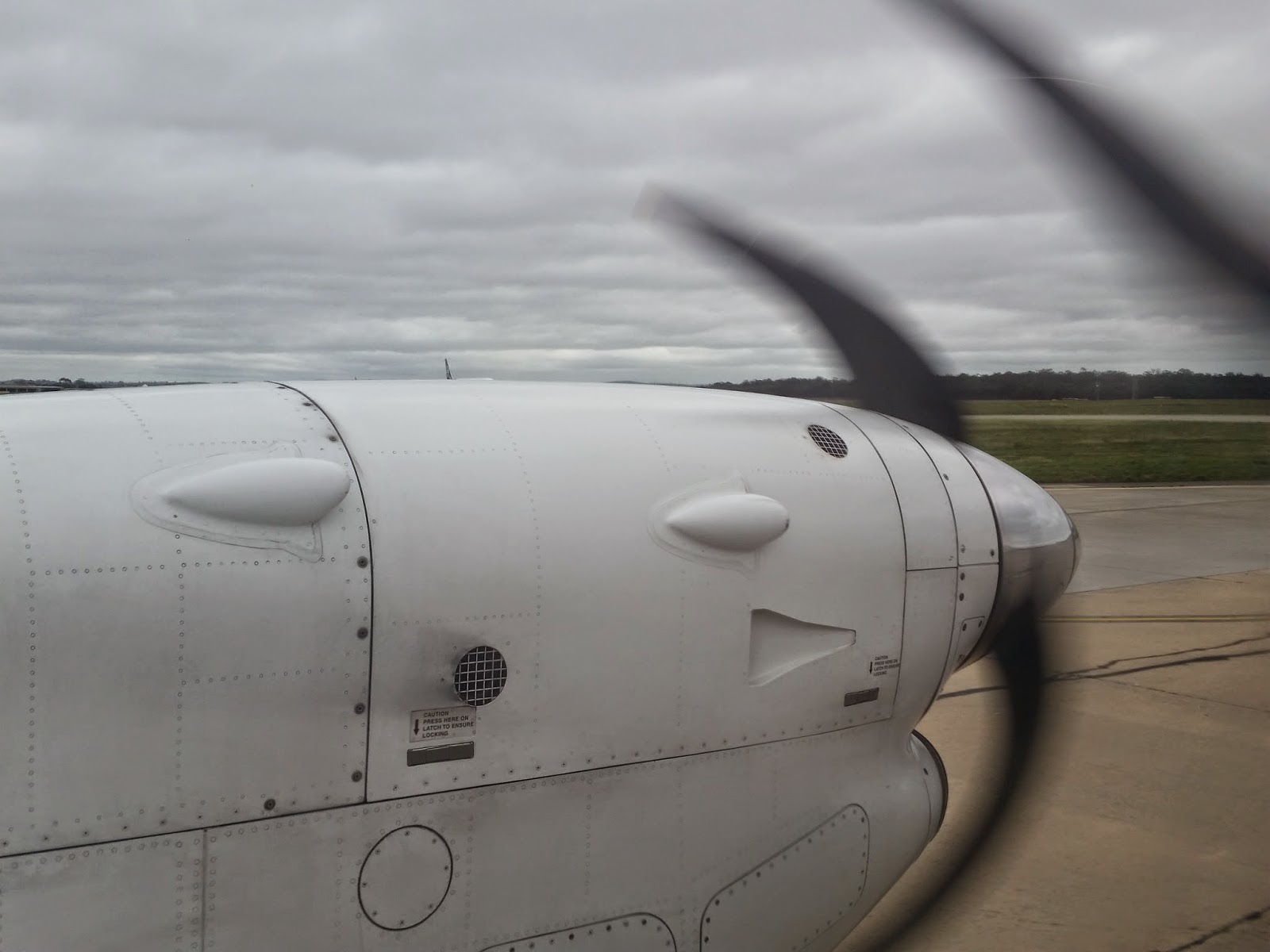 Things were still pretty busy at Melbourne and we had to hold at the runway for about 15 minutes before finally taking off. 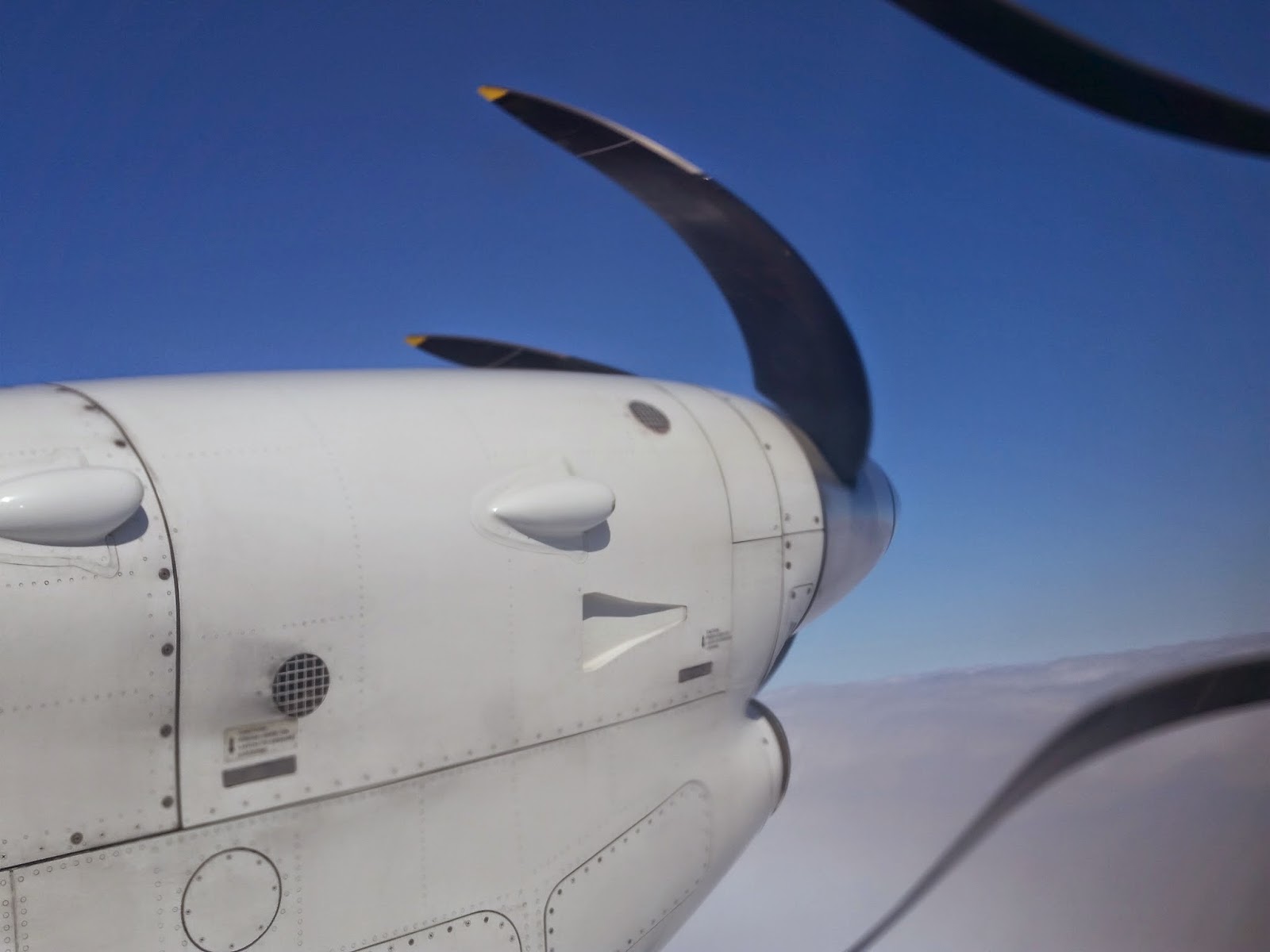 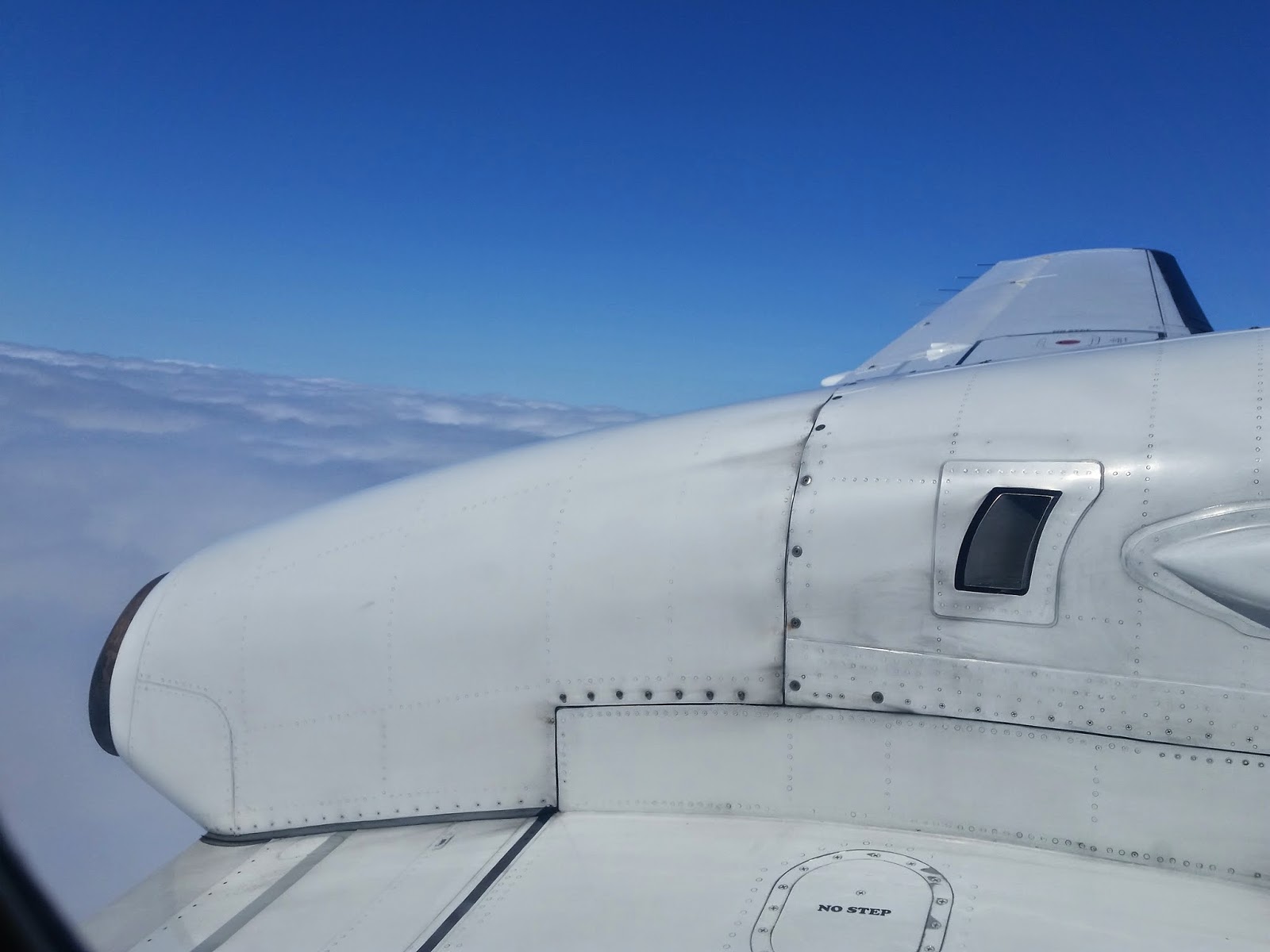 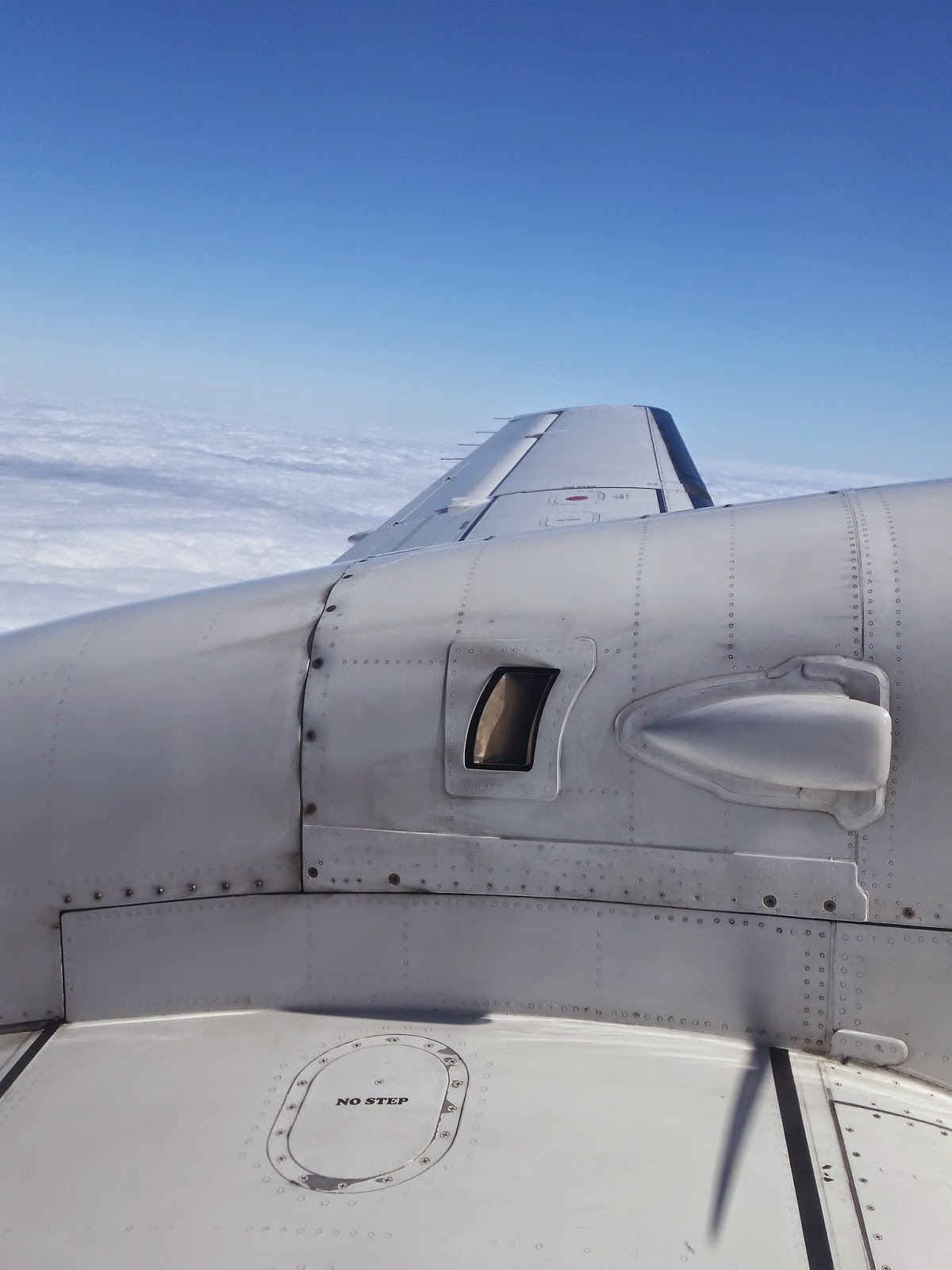 I do love the sounds of the engines on the Saab, there is something exciting about flying on a turboprop. It's such a nice change after so many Airbus A320 flights of late. The seats are leather and quite comfortable too: 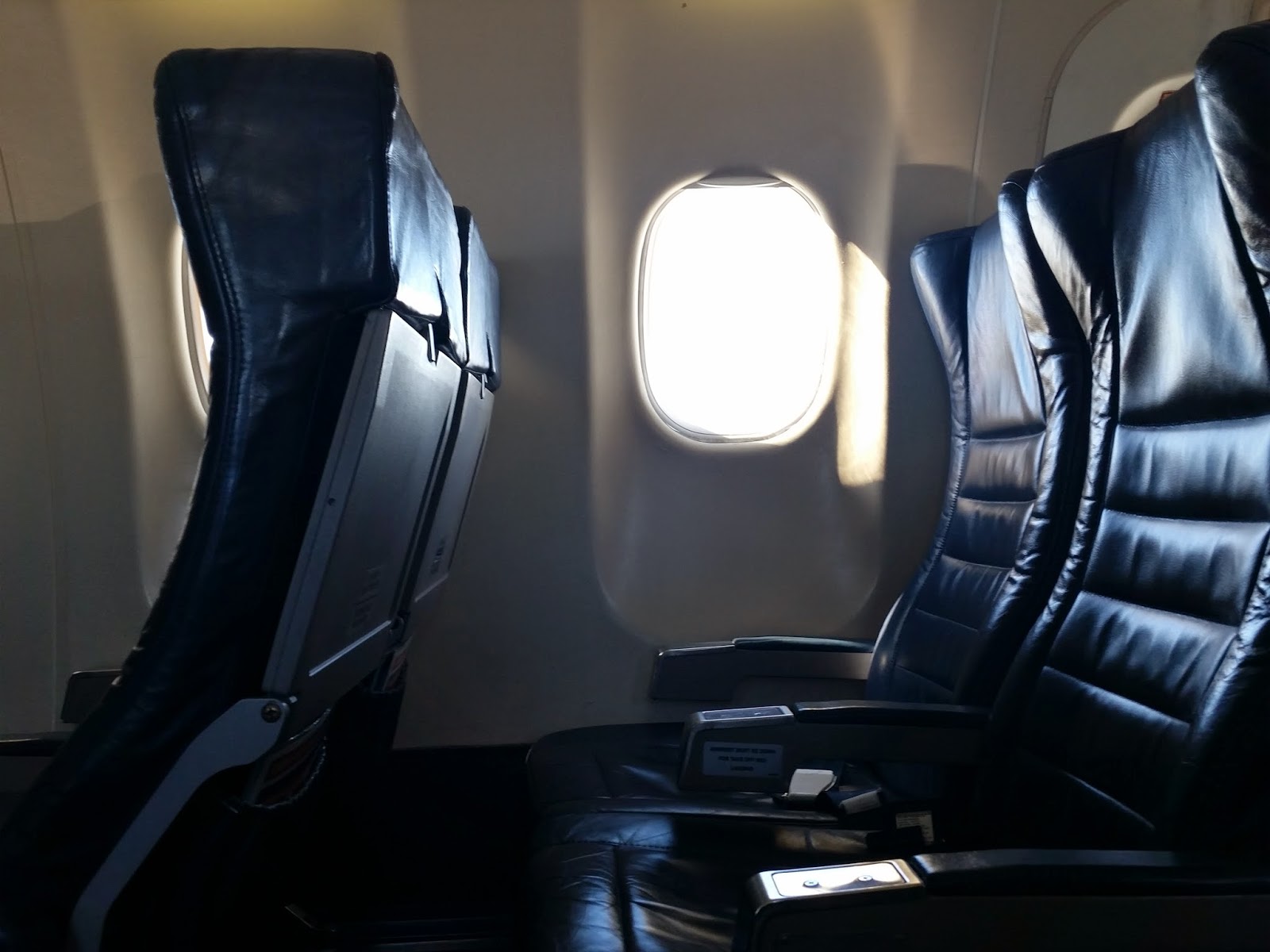 The single flight attendant on board soon came down the aisle with her small trolley and offered everyone a small tub of water along with a choice of a cookie or packet of chips. I took the cookie. She also left a cup along with sugar and milk if you were going to be having a hot drink. A short time later she came down the aisle, first with coffee, and then with tea. I had a cup of coffee. For a 45 minute flight the offering was perfectly acceptable and the service was friendly. 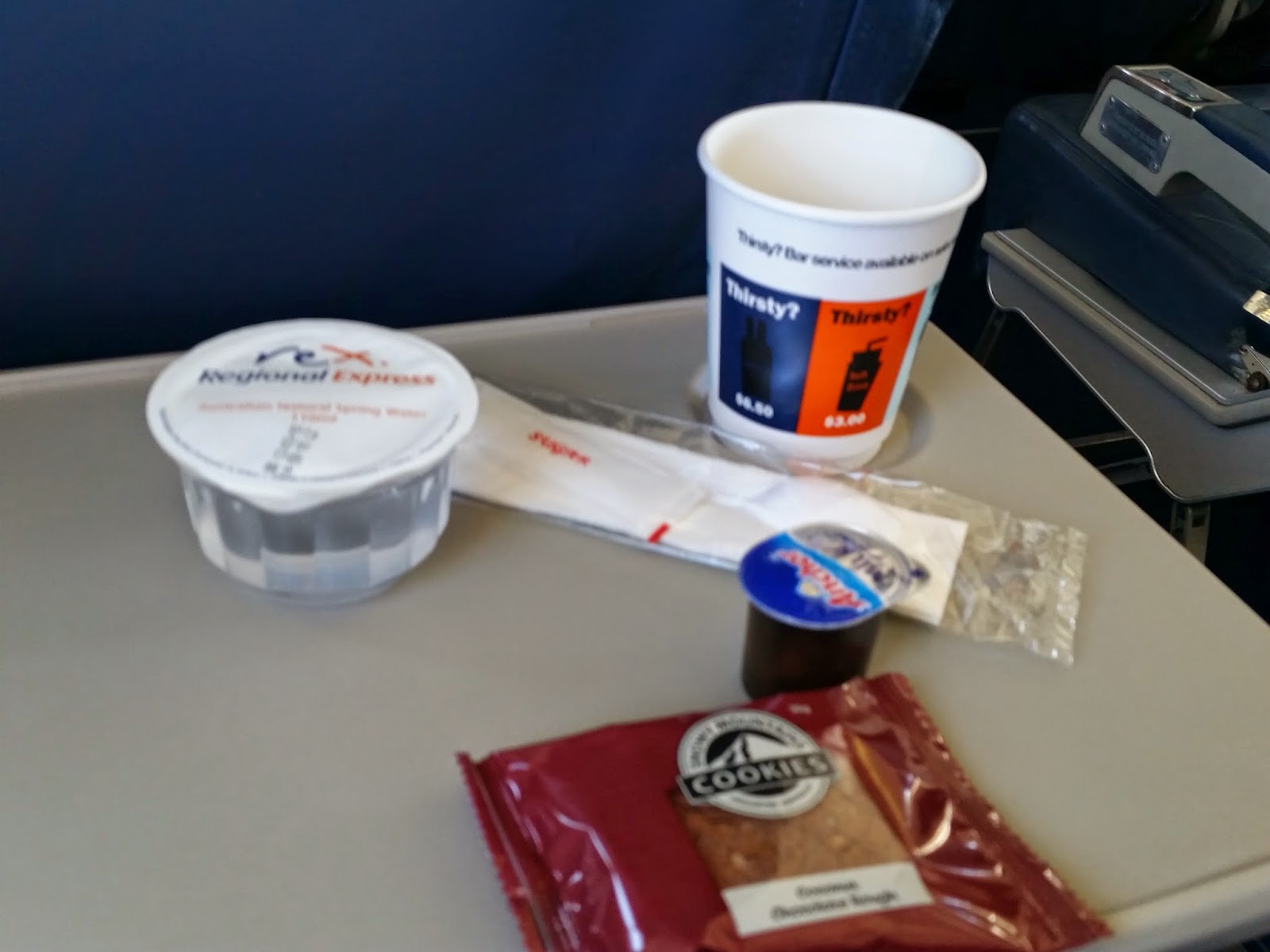 As we headed north the Captain made his announcement, advising the weather would be fine in Wagga. And sure enough, as time went by the weather got better. 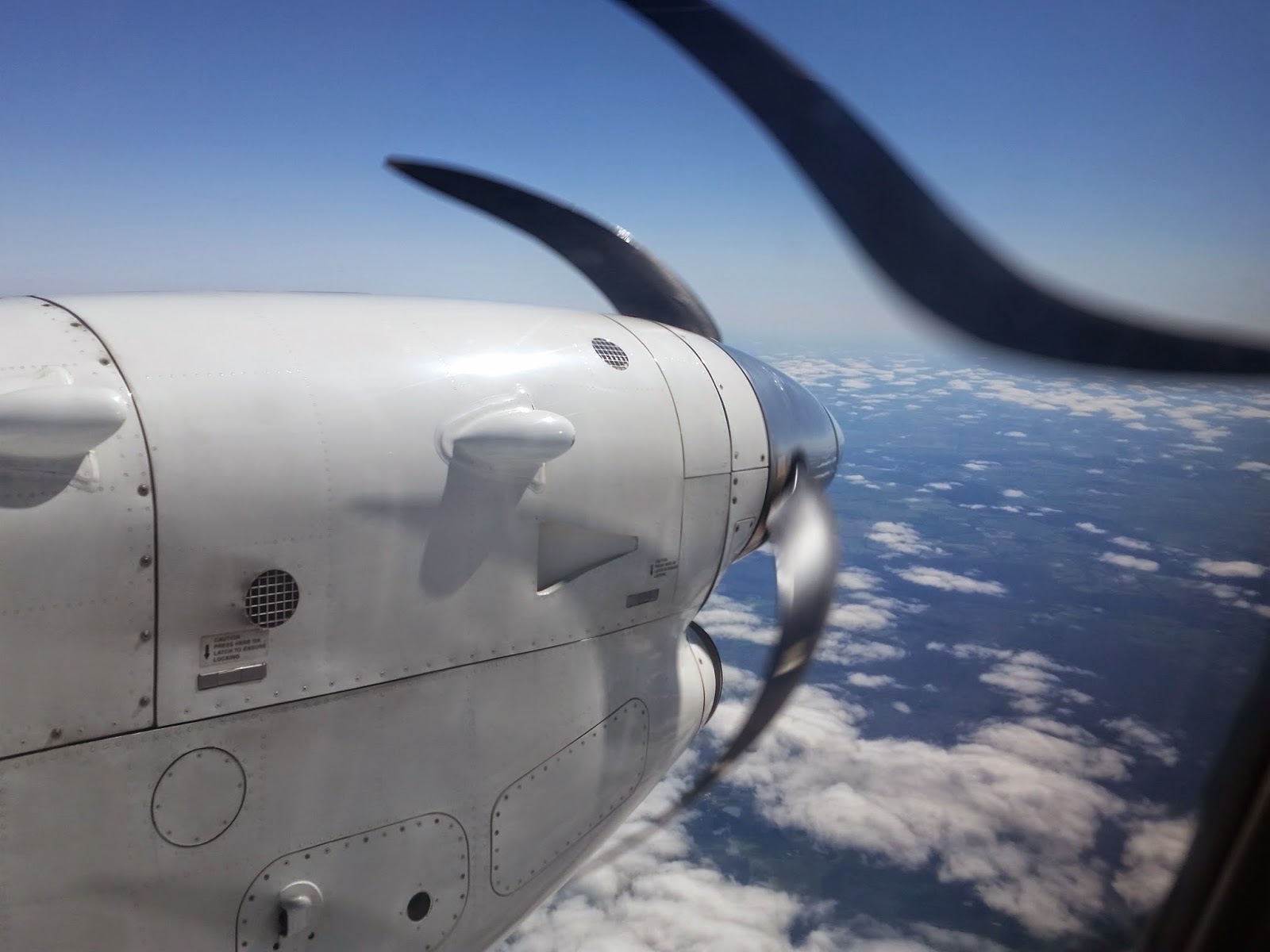 The descent was fairly smooth most of the way, but during the approach phase there was a little bit of turbulence. The scenery was beautiful and green: 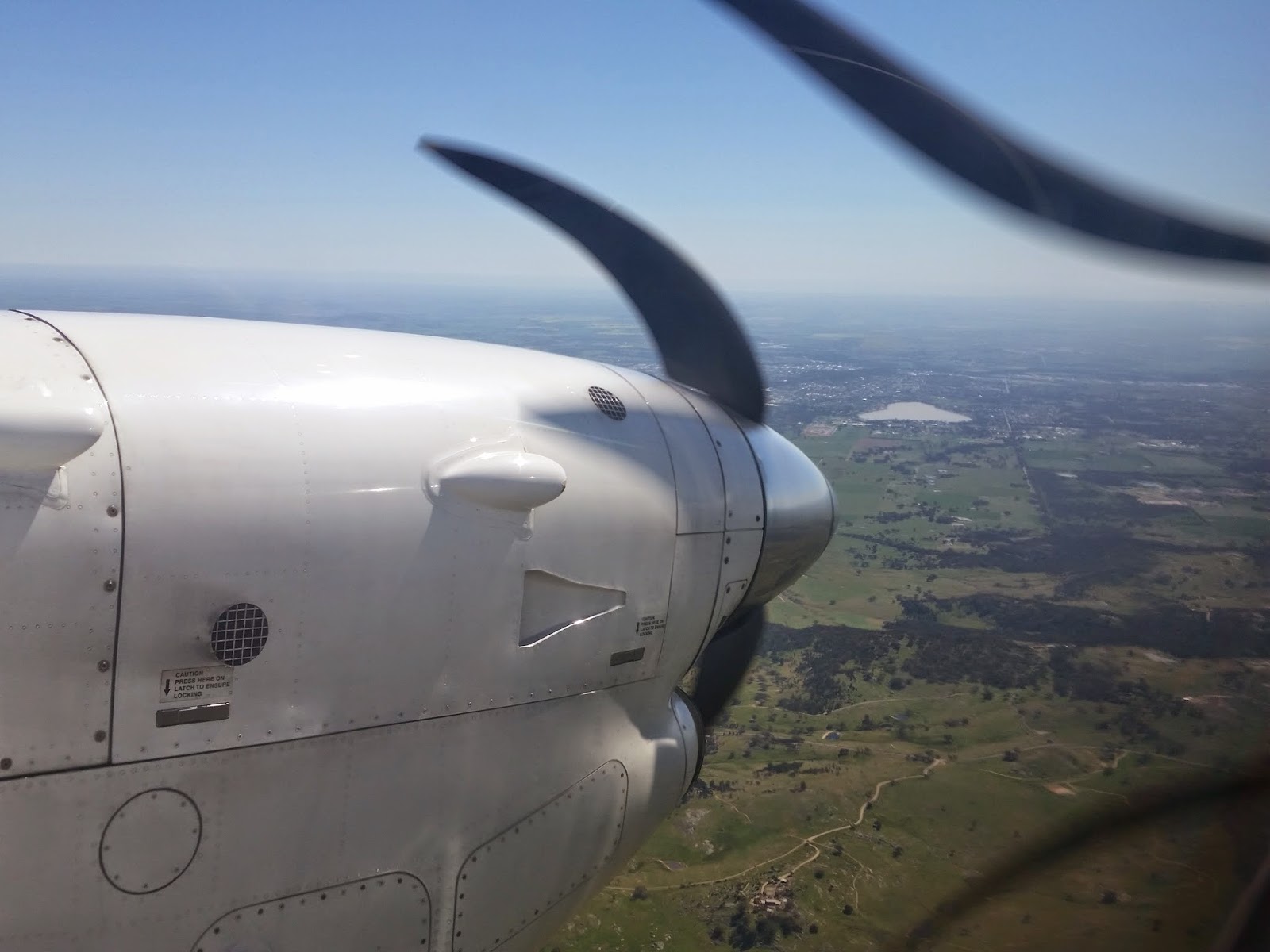 A smooth touch down and the flight was over. We taxi'ed to the small terminal building and I bid farewell to the flight attendant at the door. The first officer was on the tarmac waving everyone off too. Very nice.

I headed outside to the baggage claim area and snapped this photo of our aircraft: 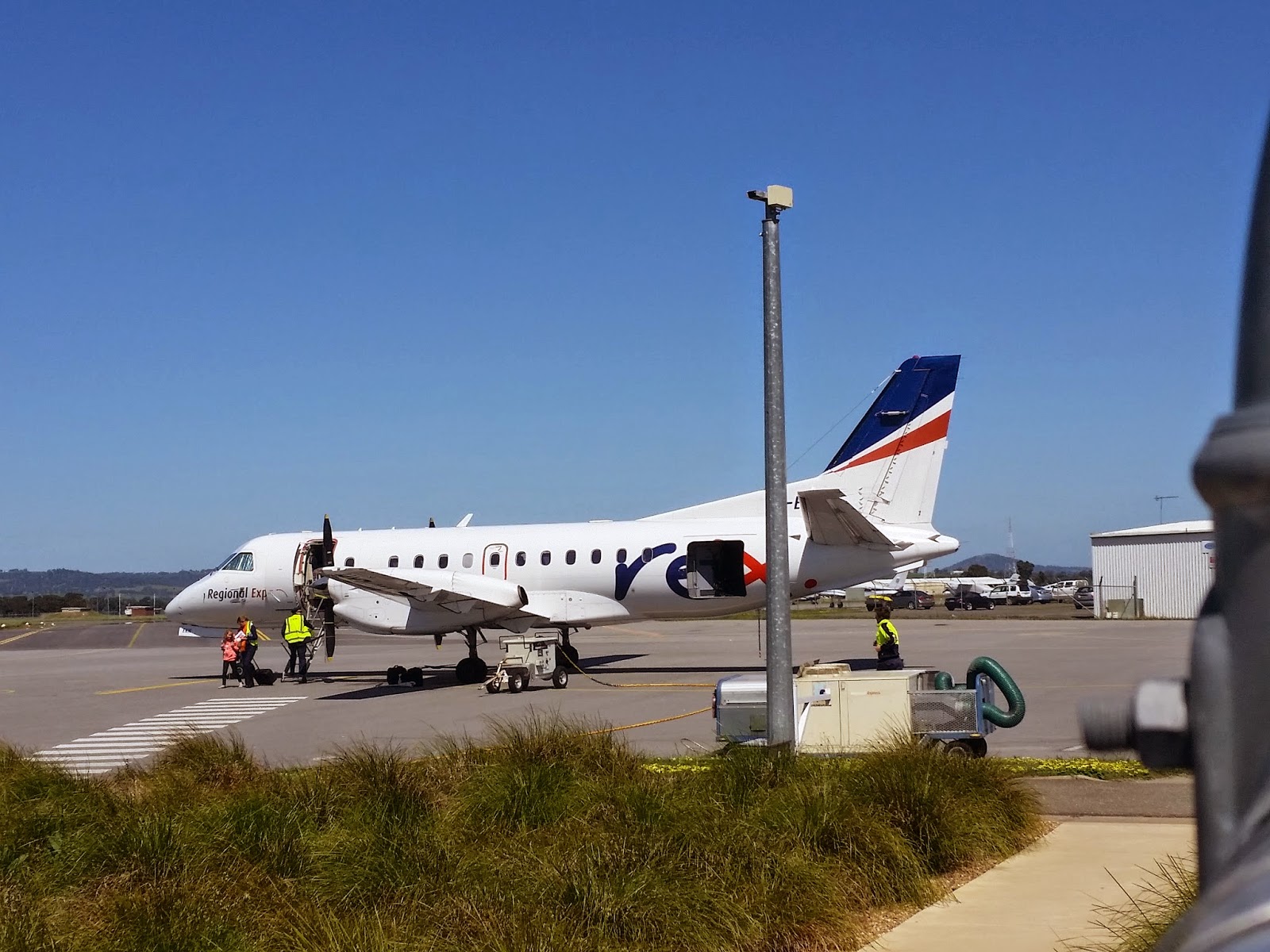 Since my ride hadn't arrived yet I sat outside the terminal and waited: 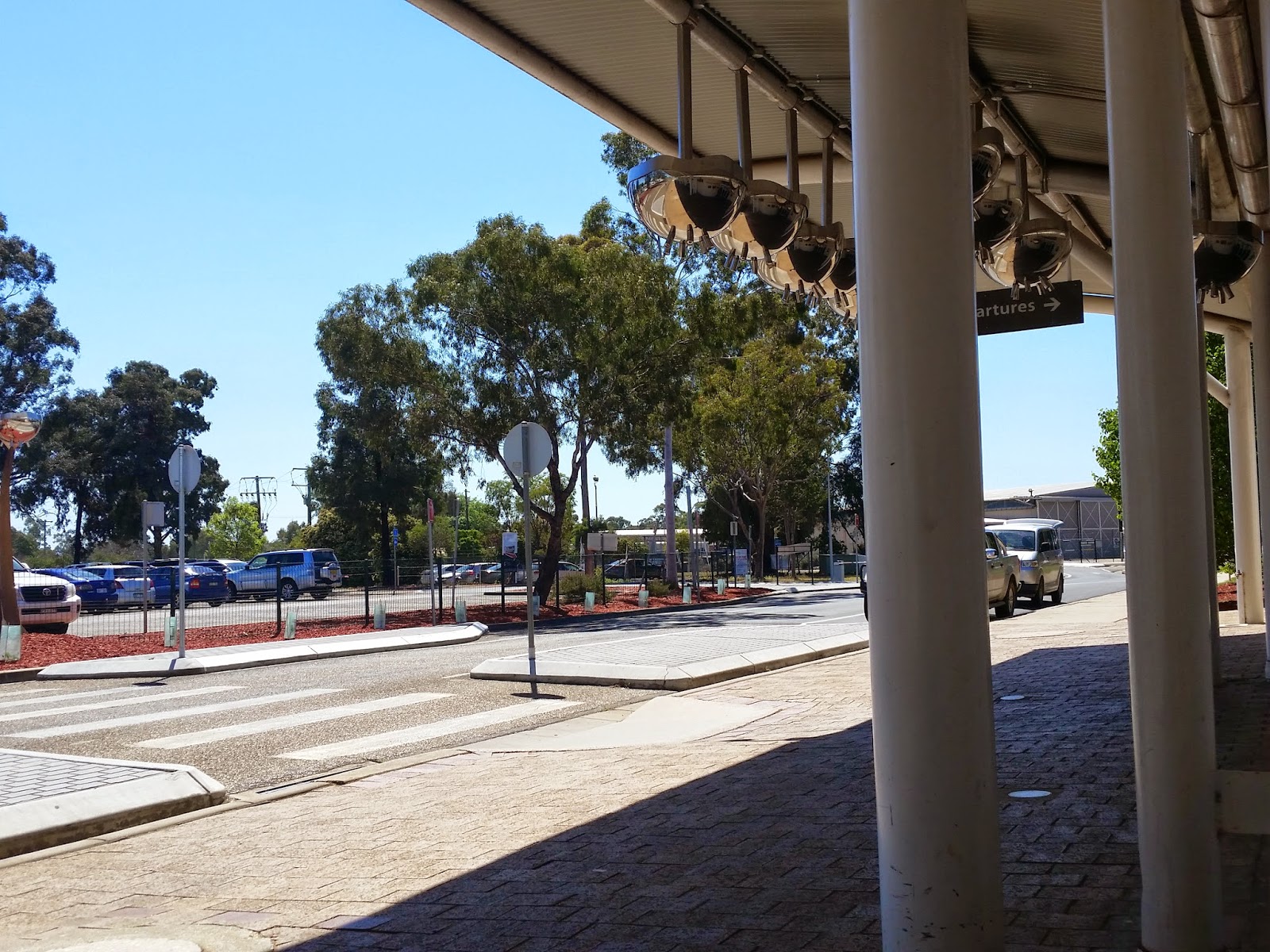 All in all it was a great experience although the flight was a little expensive ($169 AUD). Rex provide a very important service linking many regional communities to our larger cities and I wish them every success!
economy class Regional Express Saab 340