- December 01, 2014
Last month I decided I needed to satisfy my cravings to fly again so I planned and booked a very hectic 6 day trip from Melbourne including stops in Bangkok, Tokyo, Osaka and Hong Kong. This is my report of the flights I took on this trip. They include Qantas business class, Thai Airways first and business Class, Japan Airlines economy class, and EVA Air business class, including a Hello Kitty flight.

This post is about the first part of my trip, the short hop between Melbourne and Sydney to connect up with Thai's 10am service to Bangkok. I have  done this a couple of times before and I always choose the QF400, 6am service.  It is almost always on time and leaves a nice 2 hour 30 min transit time in Sydney. The only downside is just how early in the morning it is. Since I was flying onwards in First Class from Sydney, it seemed only natural to fork out a few extra points and fly in business class on the first leg. Here is the review of this short flight: 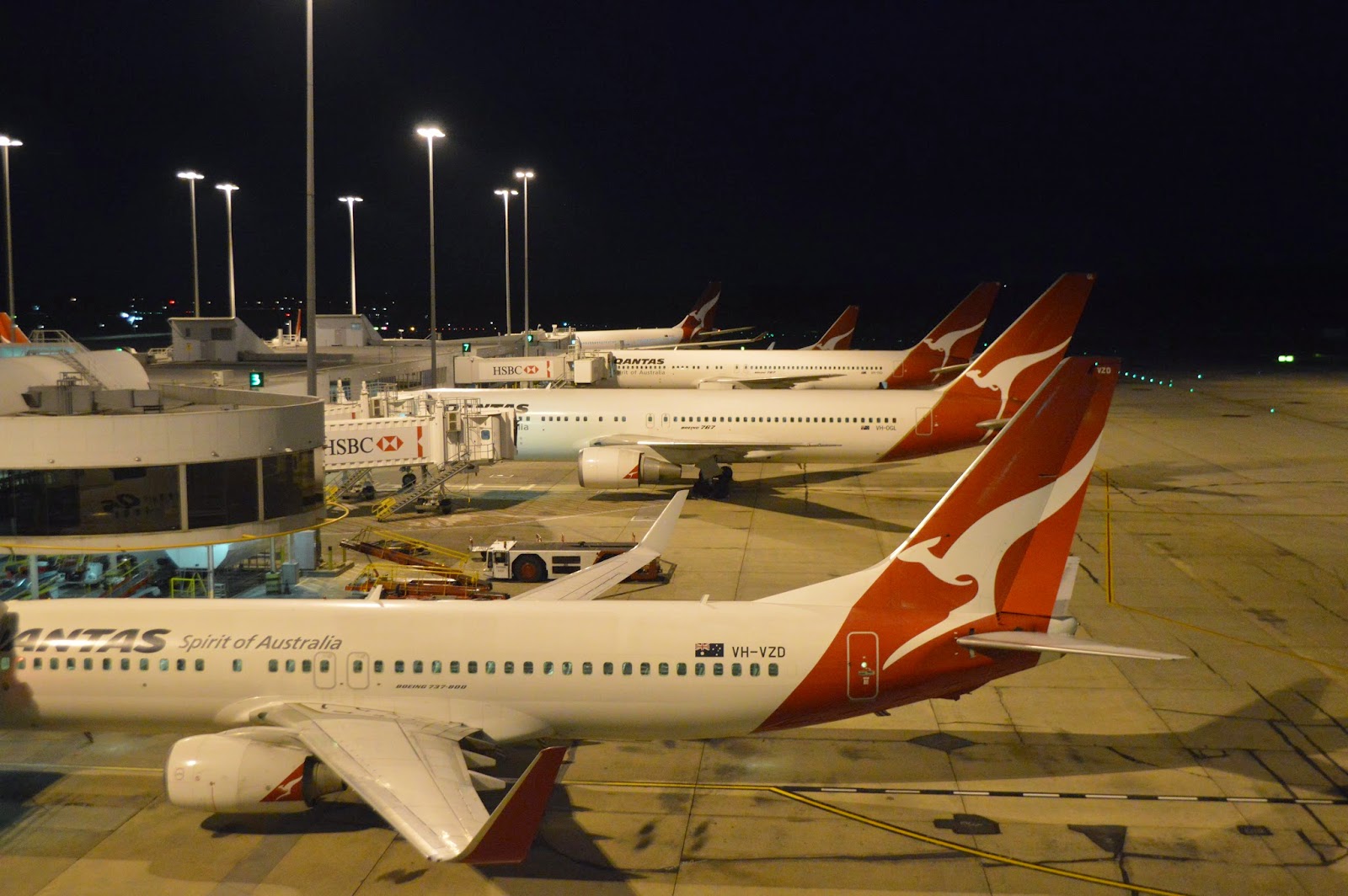 The day started in the business class lounge with a great view of the domestic apron  in the pre-dawn.  I had a cup of coffee and a snack whilst admiring the views, including a couple of Boeing 767's which will be withdrawn from service by the end of December.

There is a myriad of options available for check-in for domestic flights. For me I had checked in through the website and printed my boarding pass (as shown above). I dropped my bag off at the automatic baggage drop area with the 'Q Bag Tag' which scans automatically and knows my flight details through my frequent flyer number. Other options to check in include scanning your frequent flyer card on the Q reader poles located throughout  the terminal, the  selfe serve kiosks in the terminal, through the app on your phone or m by using the mobile website.

At 5.40am flight QF400 was announced as being ready for boarding, so away I went to gate 11. On this particular morning it was a public holiday in Victoria so the flight was quite lightly booked. Since there was very few business folk travelling today Qantas was not operating its usual weekday schedule, with the next flight not due to depart until 7am. As I arrived at the gate I noticed that today's service was being operated by VH-EBV, which is in the 'oneworld' livery. This aircraft was quite new, having been delivered just under 2 years prior to the flight.

Unfortunately this aircraft was equipped with the 2x3x2 recliner seat configuration in business class. Qantas recognised how unpopular this was a while back and stopped selling the middle seat, replacing it with a working area/tray table instead. Soon these seats will be a thing of the past thankfully, with the new A330 suites due to be installed over the coming year or so. On today's flight out 36 available seats only 11 were occupied, which meant lots of room to spread out.


Upon entering the aircraft I was greeted with a very cheerful Qantas cabin crew team. I was immediately addressed by name and that happened throughout the flight. Just before 6am the doors were closed. We did seem to spend a few minutes waiting for some of the cargo to be loaded before eventually pushing back and taxi'ing down to runway 34. The daylight was just coming out as we took off towards the north at 6.20am.

It was a nice day for flying and the seatbelt sign was extinguished quite quickly. Not too long after that the flight attendants were coming down the aisle with the breakfast service. Choice was muesli for the cold option or a omelette stuffed with feta and tomato with sausages. Both options also come with a bowl of yoghurt and fruit. I  took the hot meal and it was pretty tasty: 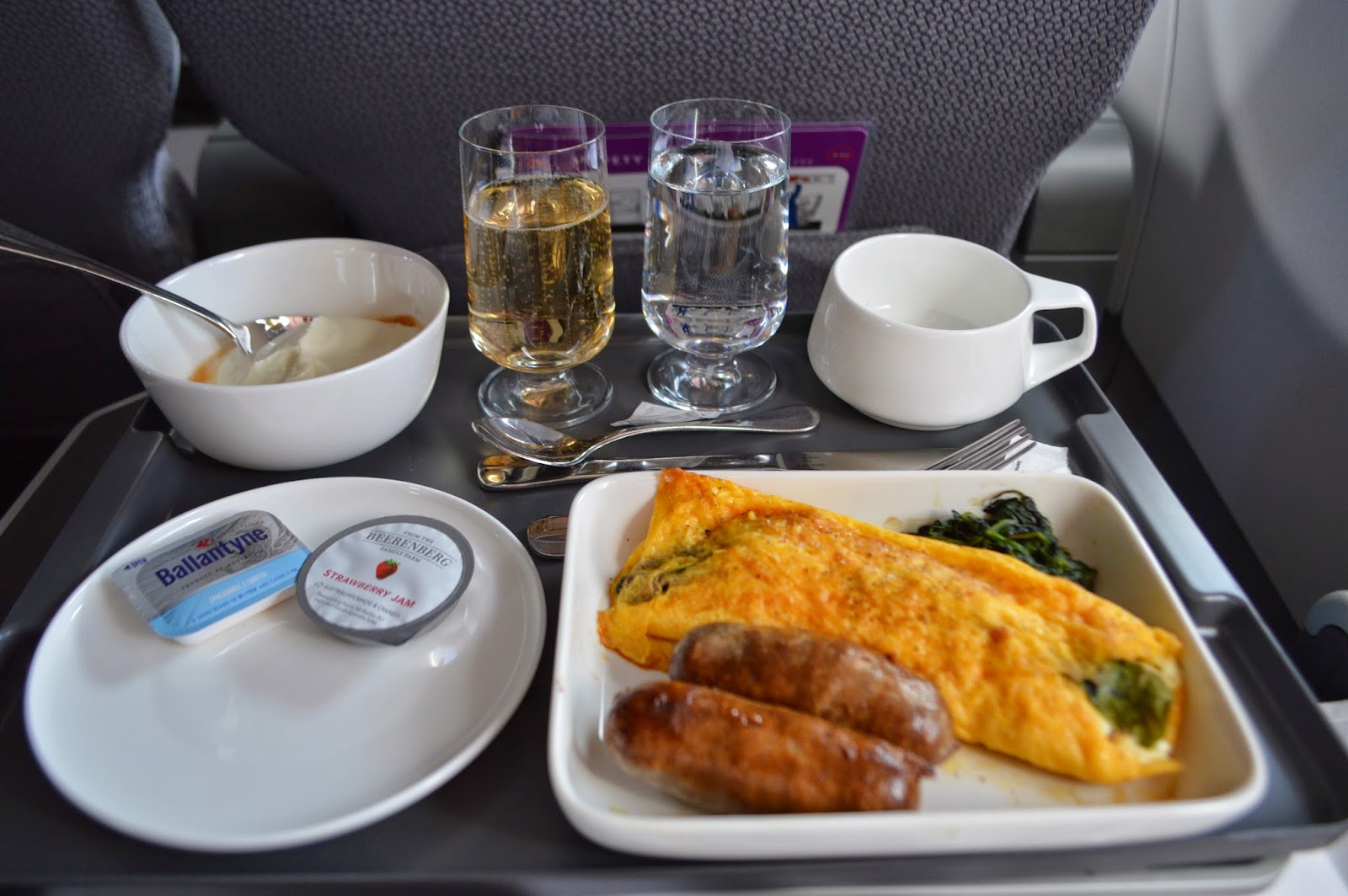 I decided to have a sneaky morning sparkling wine and was presented with the standard domestic business class piccolo of Grant Burge sparkling pinot noir chardonnay. It's not a bad wine actually and I often partake in it during breakfasts on Qantas!

The bread basket came around soon afterwards and I had a piece of sourdough along with an apple and cinnamon muffin. The muffin was fresh and delicious. All in all, the meal was very tasty and more than sufficient on a 60 minute morning commute to Sydney. Tea and coffee were also available and after  I finished my champagne I enjoyed the rest of the flight with a nice cup of coffee. 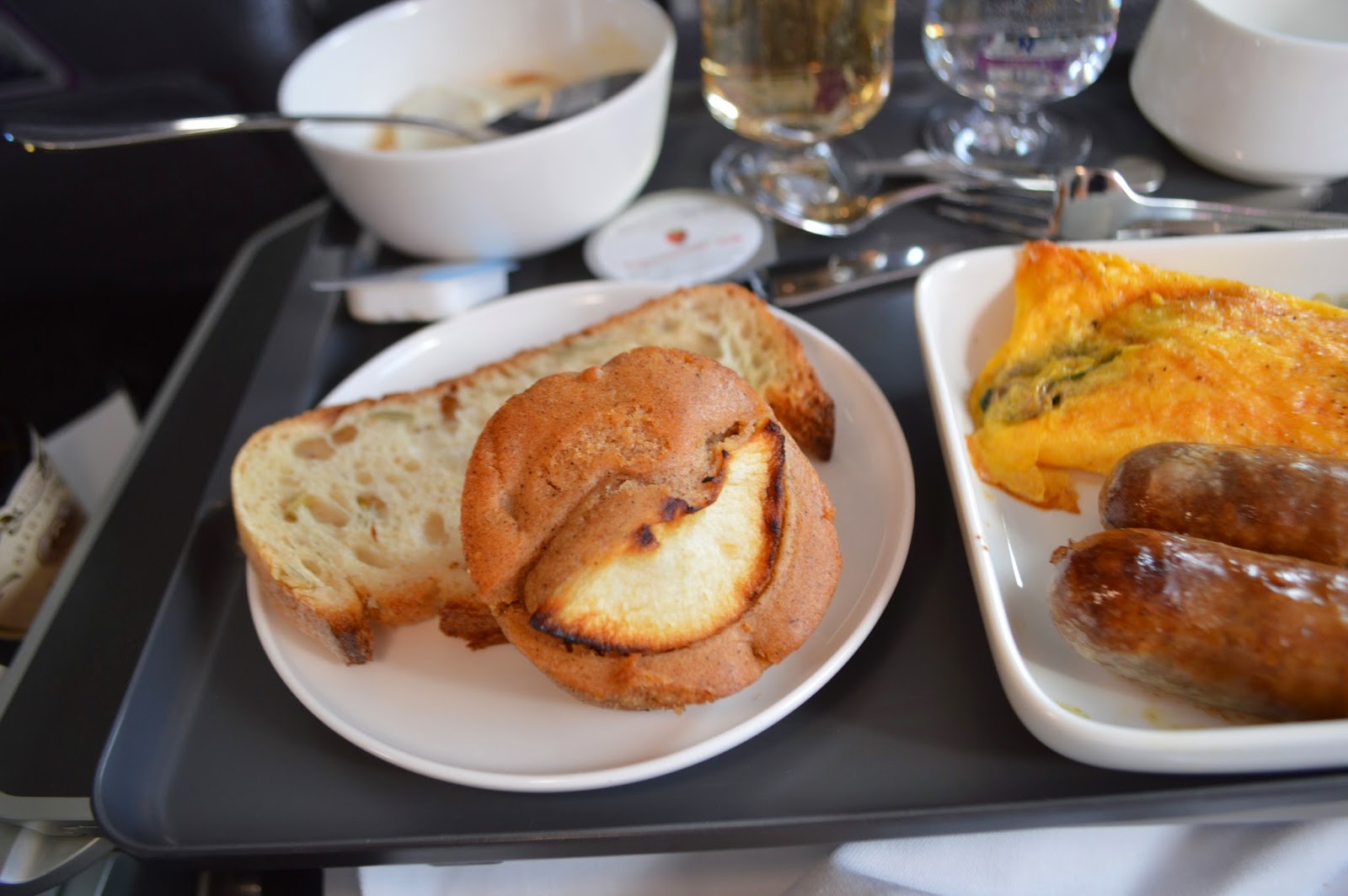 As you can see above, the leg room on these A330's is not particularly good, I believe it is quoted at 37 inches. Certainly it's fine for the commutes on the east coast, but to and from Perth it's always been rather disappointing, especially compared to what Virgin Australia offer on their A330. It's a very good thing that these aircraft are all being refurbished with suites soon. Then we will  have a consistent A330 experience regardless of whether being used on short haul, trans-con or international flight.