- December 31, 2014
Well we've known the B767 days were numbered in the Qantas fleet for quite some time now, but since Alan Joyce fast-tracked his turnaround plan for the airline, the day came somewhat earlier than many had hoped. December 27, 2014 was the final day of Boeing 767 passenger operations for Qantas, and indeed it would be the final flight of a Boeing 767 with passengers in Australian domestic service period.

The Boeing 767-200 and Boeing 767-300 have been an integral part of the aviation scene in Australia since about 1983 (with Ansett) and for many it was the preferred method of travel between the east coast capitals for decades. The type has been in service with Qantas for 29 years and was it's first twin engine aircraft.

So it was with some sadness that I booked my seat on flight QF767 from Melbourne to Sydney to farewell what I think has been a very significant part of Australian airline history. Here is how I experienced the day.... 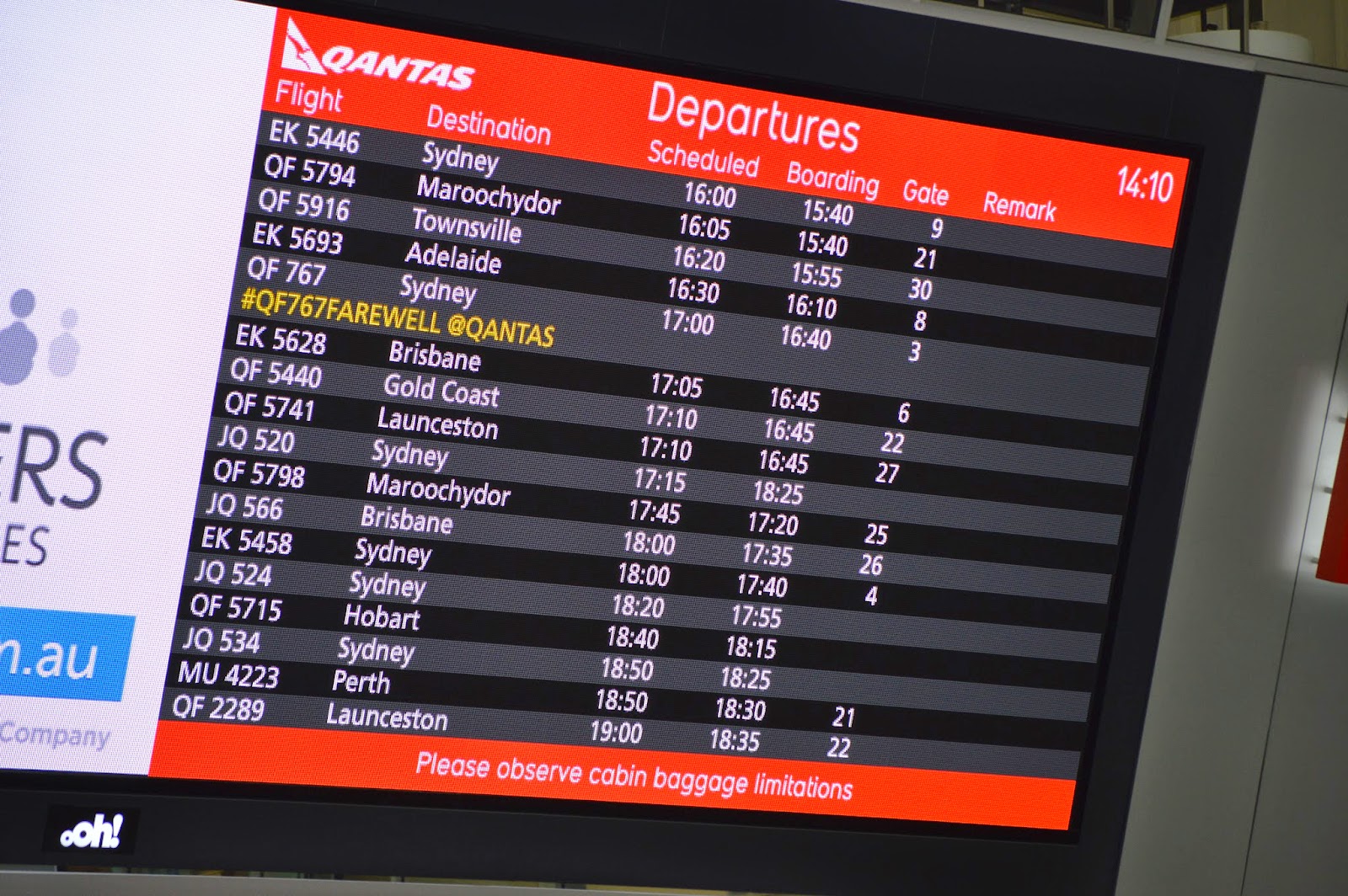 I arrived at the airport at 2.10pm (according to the above photo anyway) and noticed the board with it's special comment. I was travelling alone but decided last minute to meet up with some people I had never met from various online groups I participate in. As a result of that I met up with a couple of other 'avgeek's' and took them up into the domestic business class lounge. It's a great spot for viewing and we managed to catch the arrival of VH-OGL, the Boeing 767 operating today's flight.

The lounge atmosphere was great, there must have been at least 50 people in there who would be taking the flight. The cameras were snapping away continually as we enjoyed a few drinks, snacks and ice creams in the lounge. Many had already been given the special QF767 T-shirts and were proudly wearing them. I was fortunate to meet a few people in person who I had only previously interacted with online. It's great to put a face to the online usernames.

At about 4.10pm most people headed down to the gate where VH-OGL was waiting: 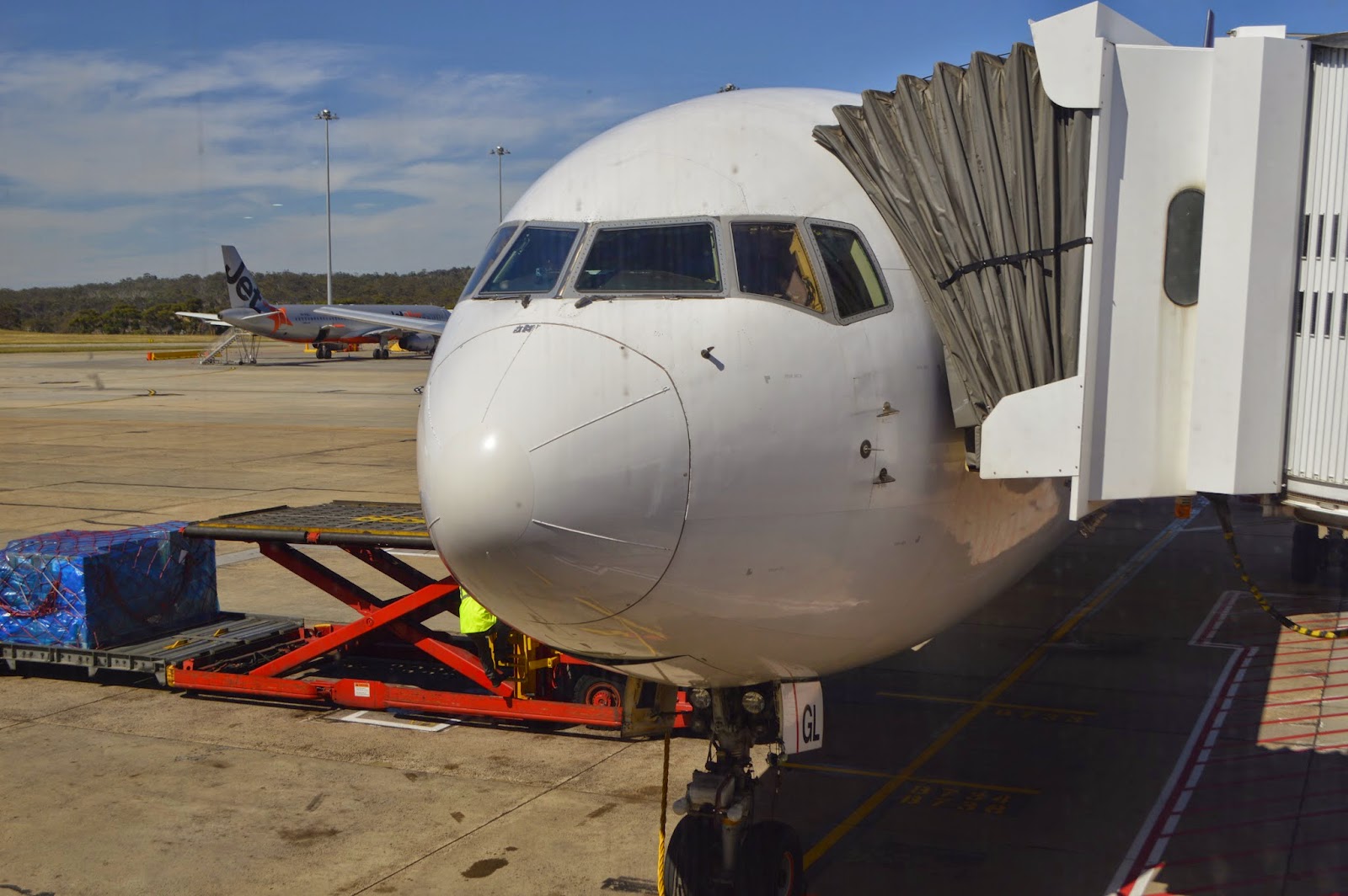 This particular aircraft was one of 5 that were remaining in the fleet, all of which had been flying earlier in the day. VH-OGL is actually one of the older examples, a Boeing 767-338ER that was delivered  new to Qantas in 1991. From 2002 to 2006 she operated for Qantas's low cost leisure offshoot 'Australian Airlines' - most likely spending a lot of time flying to Japan and Bali. In 2006 after Jetstar International replaced Australian Airlines she returned to service with Qantas - by this stage it would be used mostly on domestic services.

By the time of her retirement at 23 years old most days VH-OGL would be flying between Sydney and both Brisbane and Melbourne and also on flights to Cairns, Darwin and Perth. A long and distinguished career indeed. And now this would be her last flight for Qantas - most likely the aircraft will end up in storage, and after that who knows.

Both the Captain and First Officer were at the gate for some time before the flight mingling with the passengers, posing for photos and signing autographs. 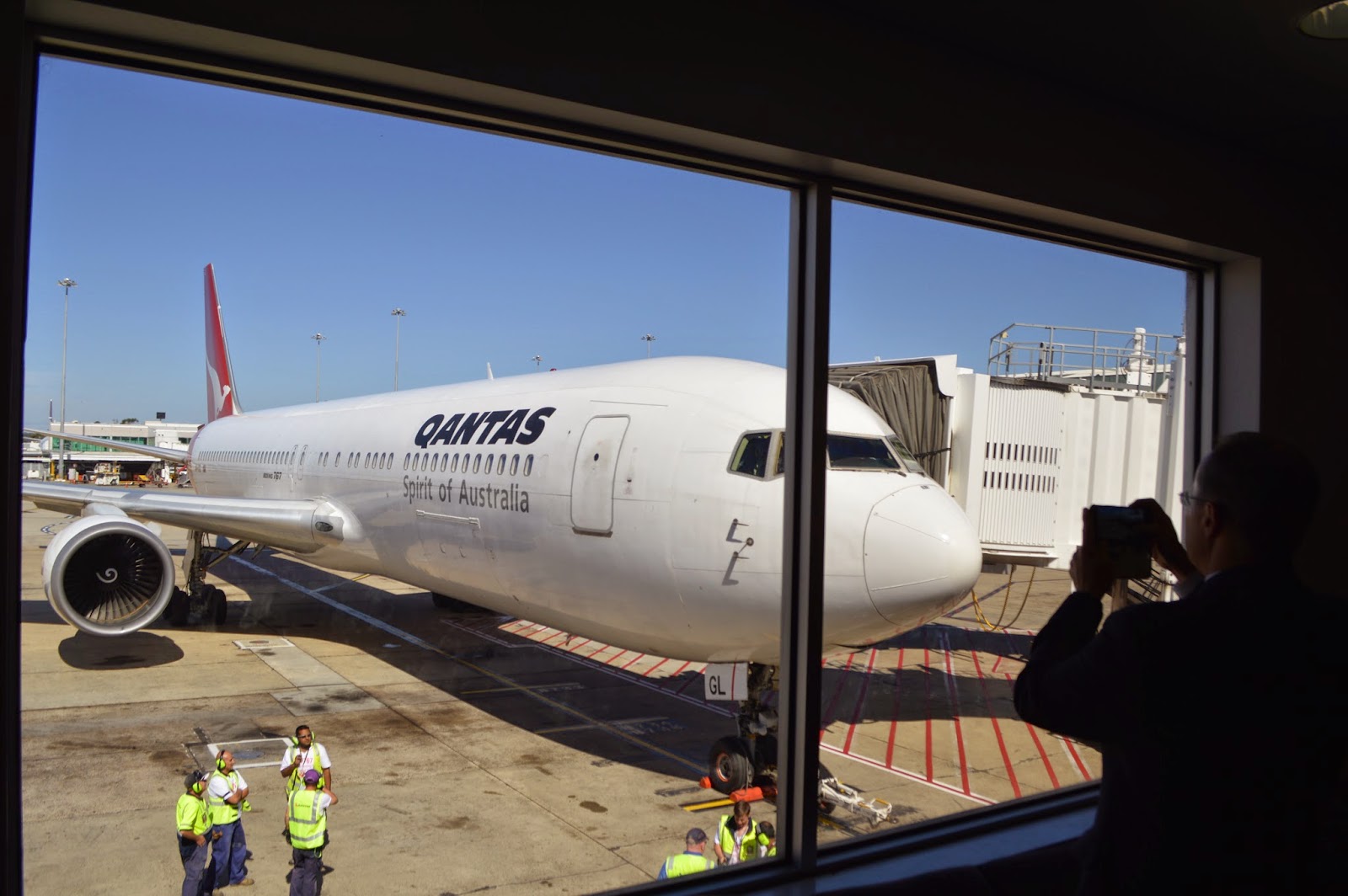 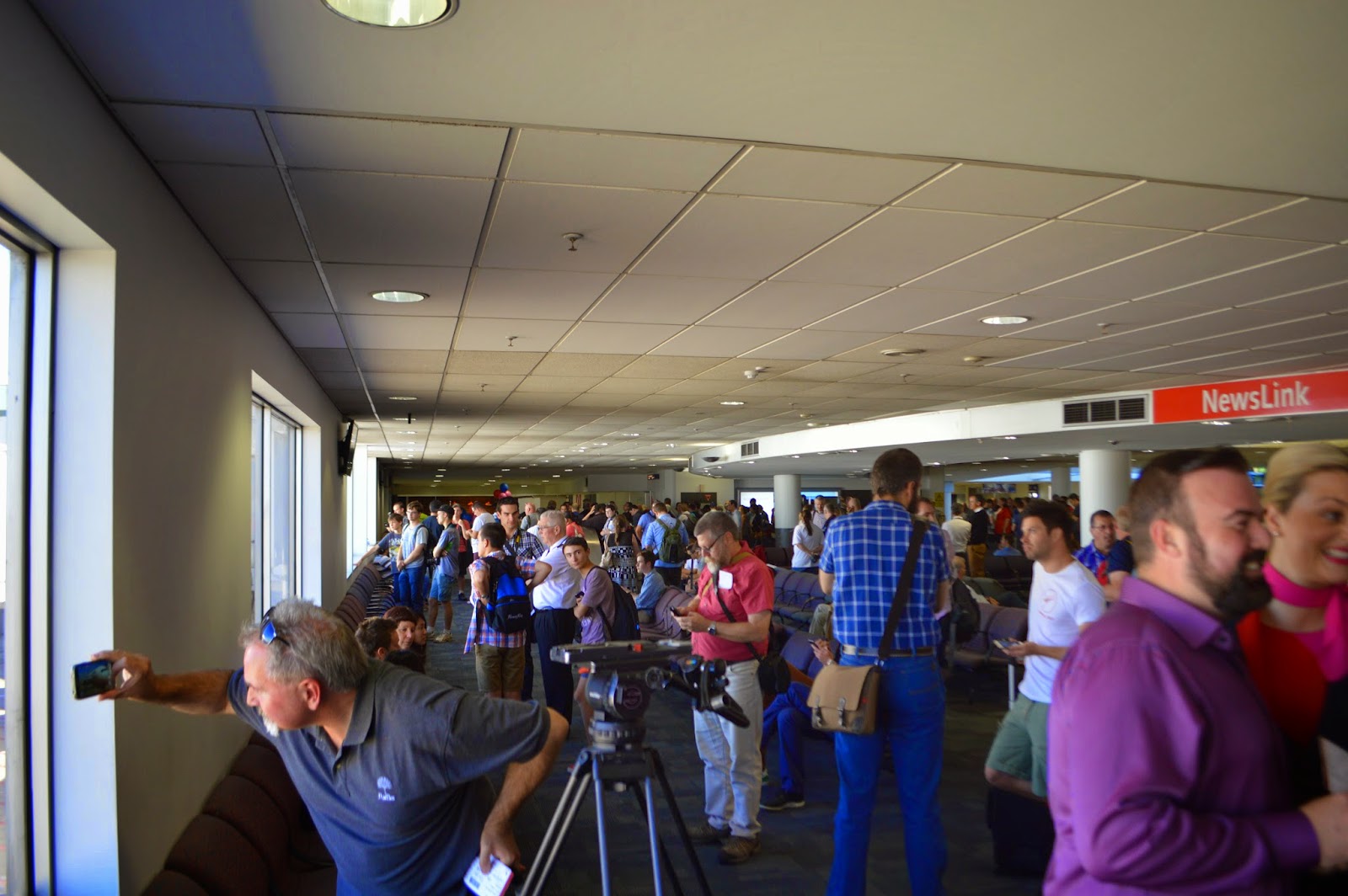 The announcement of the boarding of QF767 was made with a small speech mentioning how it was a historic day for Qantas. There was many cheers from the large crowd.... most of whom had booked this flight especially for the occasion of the final flight.


Once on board there was lots of excited chatter and cameras snapping away... 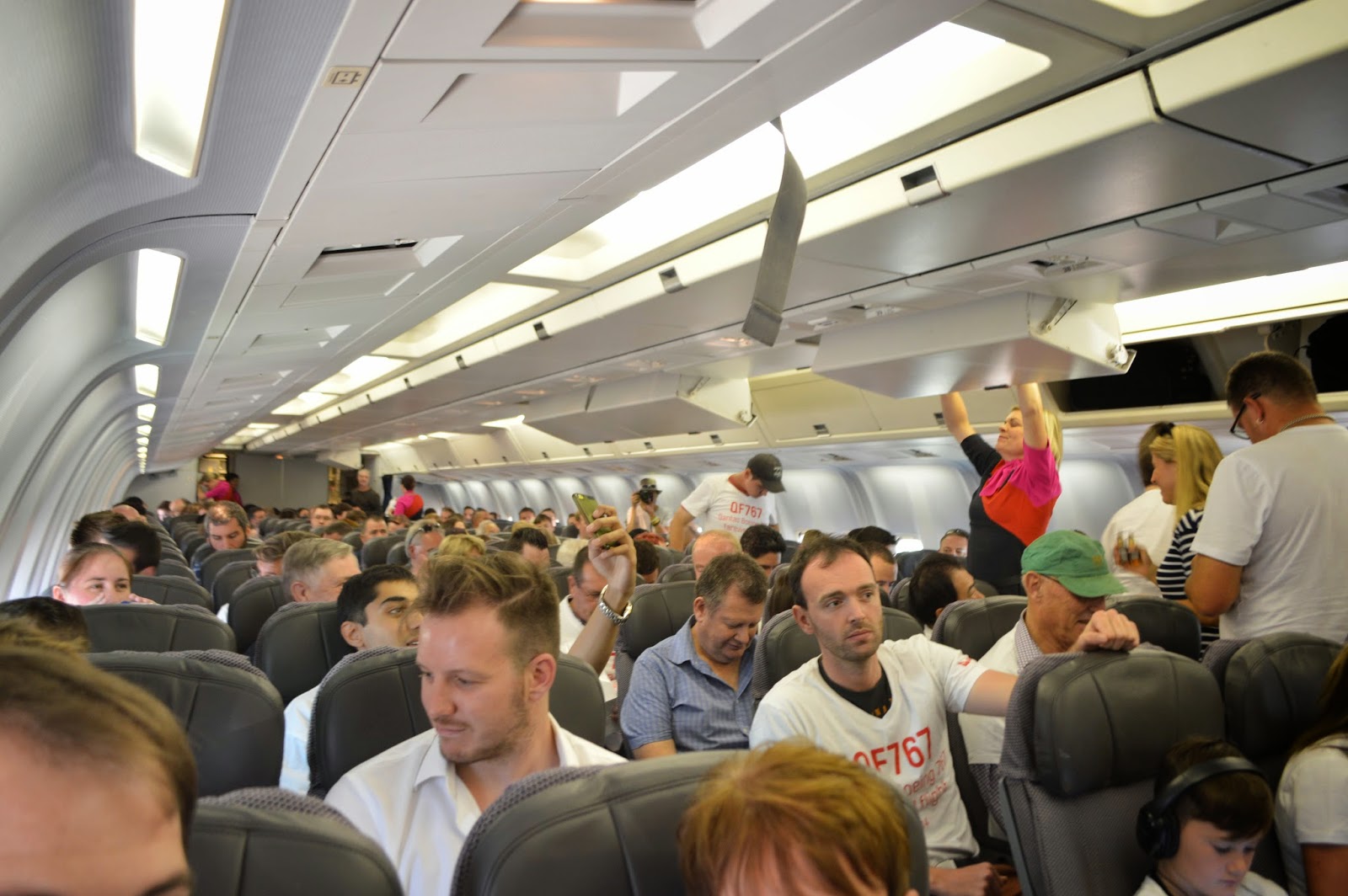 The captain made a long speech talking about the aircraft and it's history with Qantas and briefly explaining the flight and expected flying time too. When his announcement finished the cabin erupted into cheering and applause. Shortly afterwards the final safety demo was performed and we pushed back from Gate 3. I do love the sound of those GE CF6 engines....

Out to the right was a number of ground crew taking happy snaps including one who was on a cherry picker: 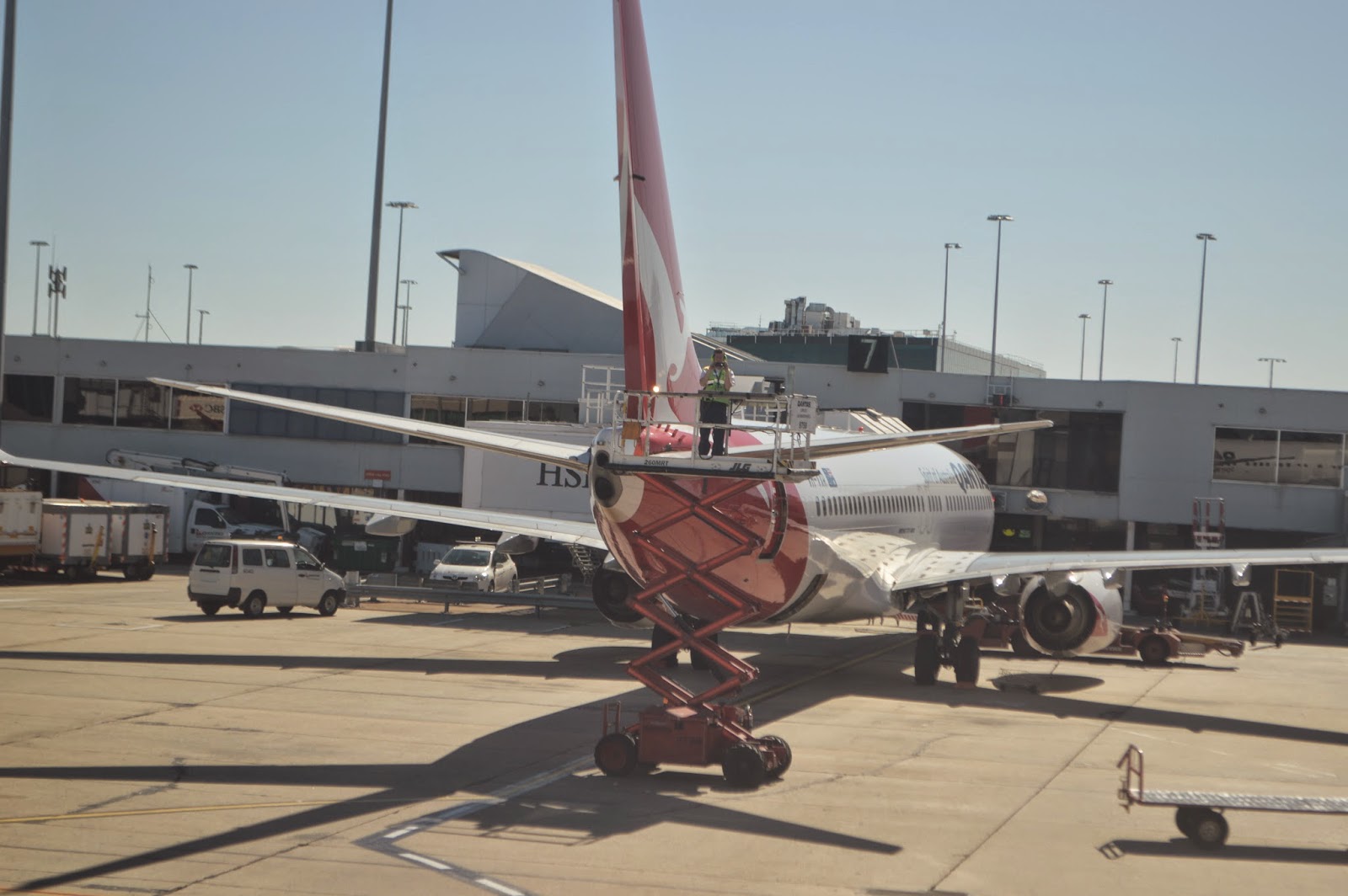 As we taxi'ed to runway 16 the fire fighters recognised the significance of the event with a traditional water cannon salute. They were perhaps a little too far away to make the water cannon meet in the middle though! 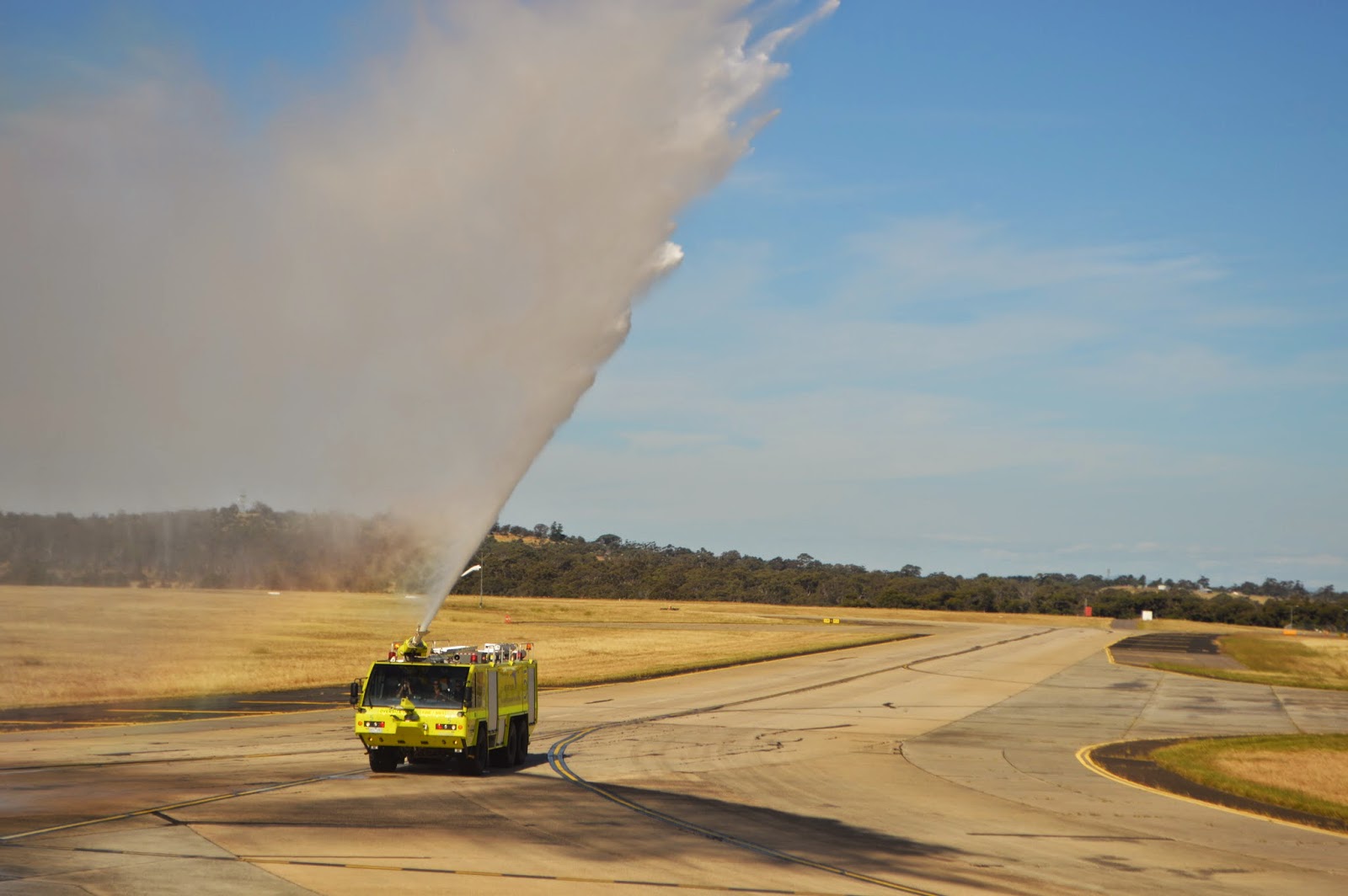 As we entered the runway the power was applied and we made a very short takeoff with nice powerful steep climb, typical of the B767! We made some right hand turns and there was a great view of the airport from my window:

The weather was superb, you couldn't ask for better. It was very smooth and the seat belt sign was turned off quite quickly and many people got up to take video and photos... myself included: 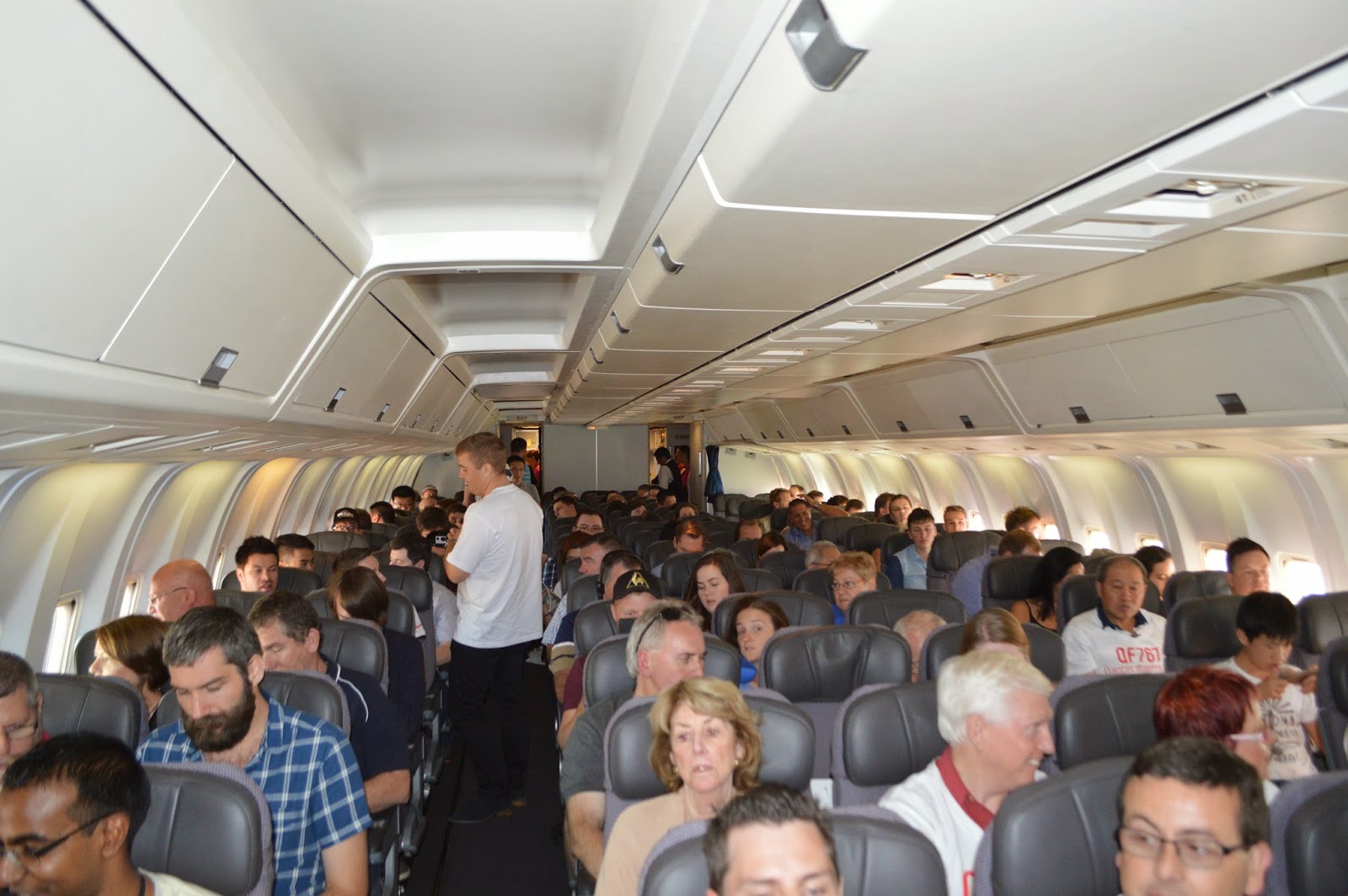 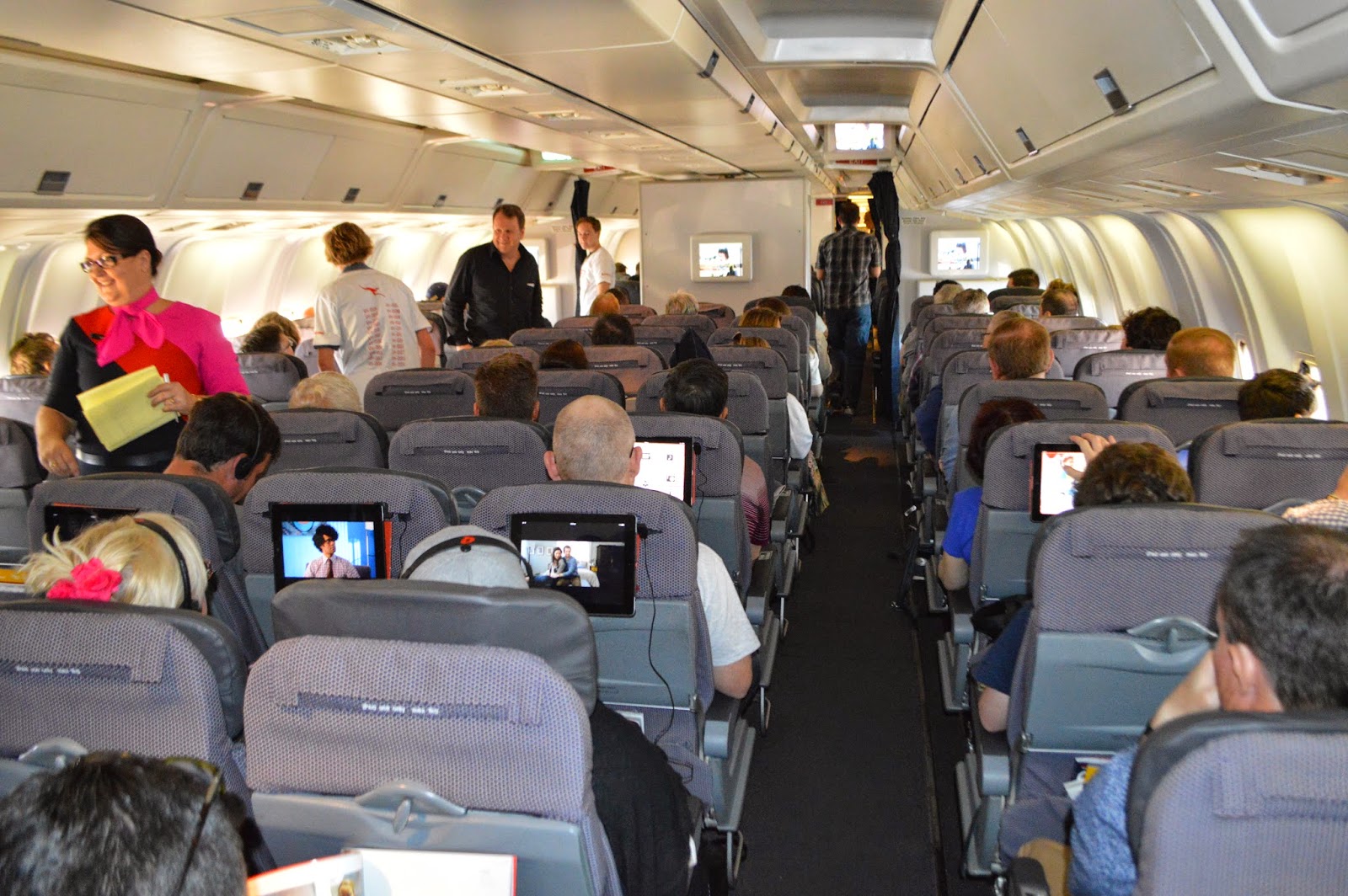 Bubbles were available along with beer and wine free of charge. This flight also featured a hot dinner service in economy. We were carrying 5 flight attendants more than usual today (12 in total) to expedite the service and get everything done nice and quick!

There was either a salad or a chicken biryani on offer. I took the chicken and it was actually quite flavoursome. To go with it a miniature bottle of sauvignon blanc.


The captain announced that the weather in Sydney was a little cloudy and they were negotiating with air traffic control to get approval to do some low level orbits of the city. Thanks to ATC because it was approved and was probably the most memorable flying experience I have ever had in an airliner. We did several circuits of the harbour and CBD at approximately 2000ft and the pilots ensured passengers on both sides got amazing views.

All good things must come to an end and after what may have been around 30 minutes the orbits ended and we climbed back up to 3000ft to get established on approach for runway 16R at Sydney. I've seen some photos taken from helicopters of our flight over the city and they look just stunning.

As we approached the entrance to the Qantas domestic apron another water cannon salute was provided by the airport fire brigade.

And there was dozens of Qantas staff taking photos and observing the final arrival. It was an emotional experience as the new Qantas theme song 'Feels Like Home' was playing on the loud speakers and I think many people had a tear in their eye. 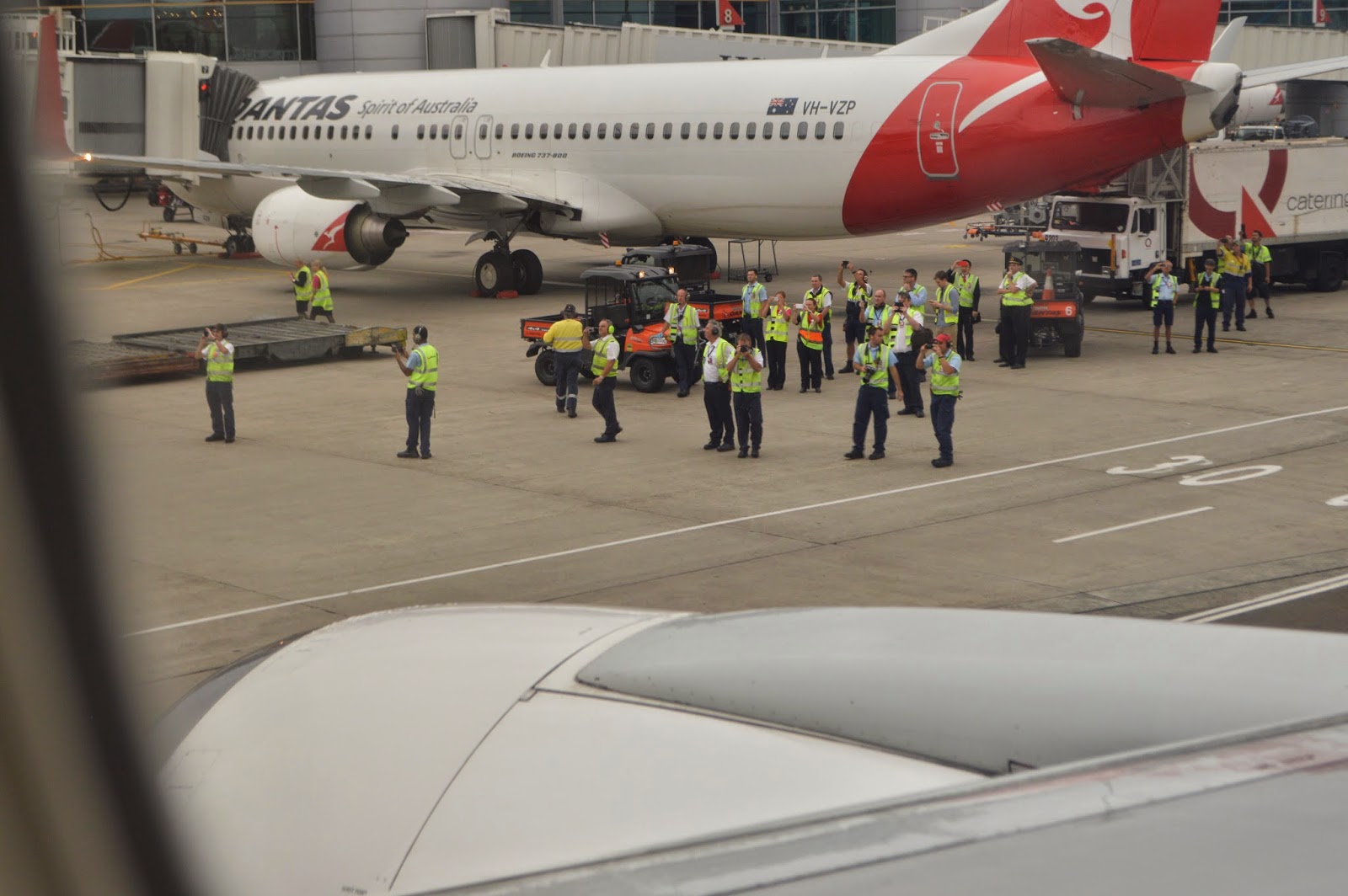 The disembarkation was a slow process with many more photos to take including some of the cockpit. 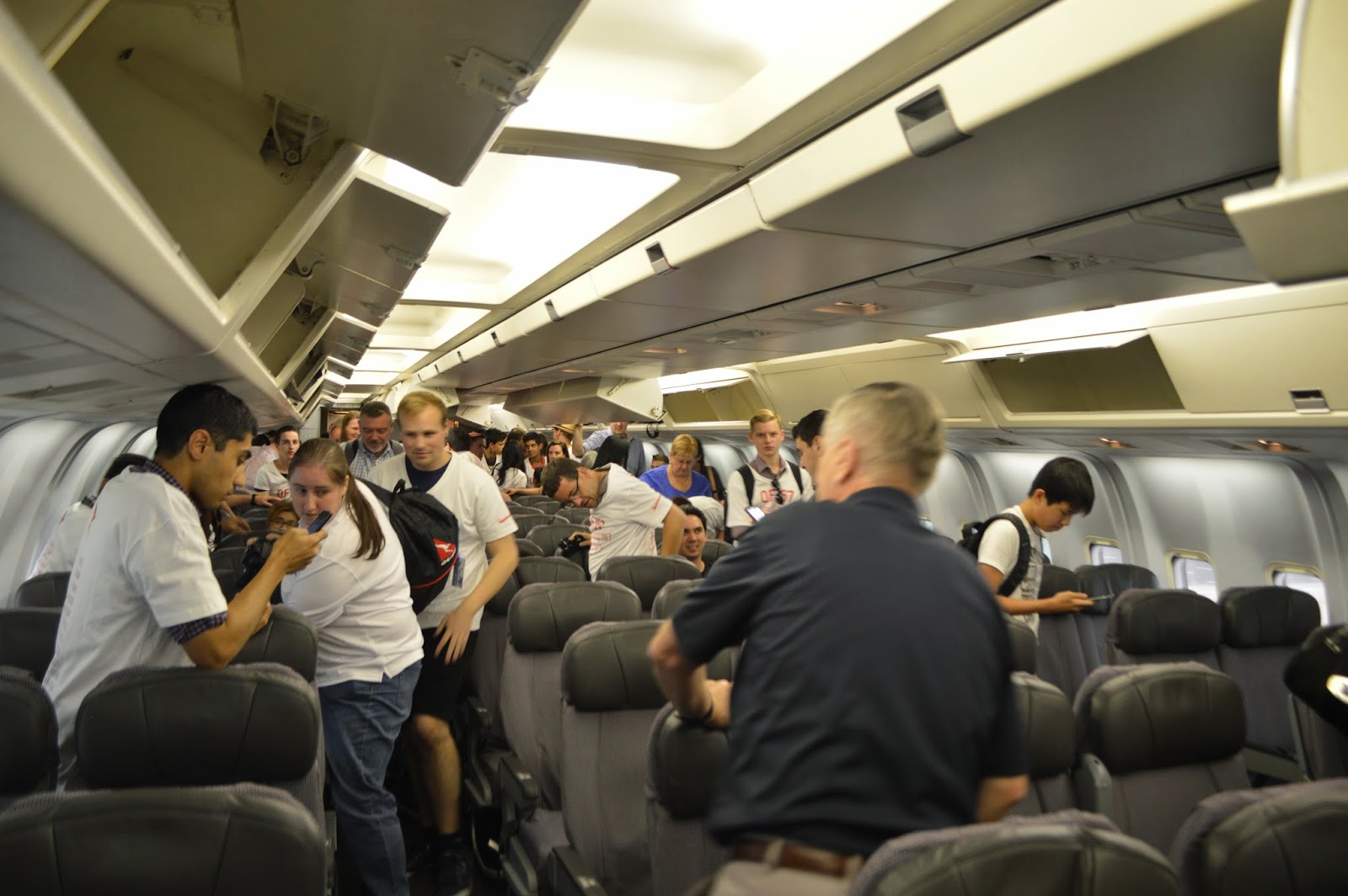 The Captain and First Officer were at the door signing boarding passes and greeting everybody. I had mine signed at the gate in Melbourne and will keep it as a great souvenir of the day.

I was fortunate enough to get to have a look at the cockpit, here she is: 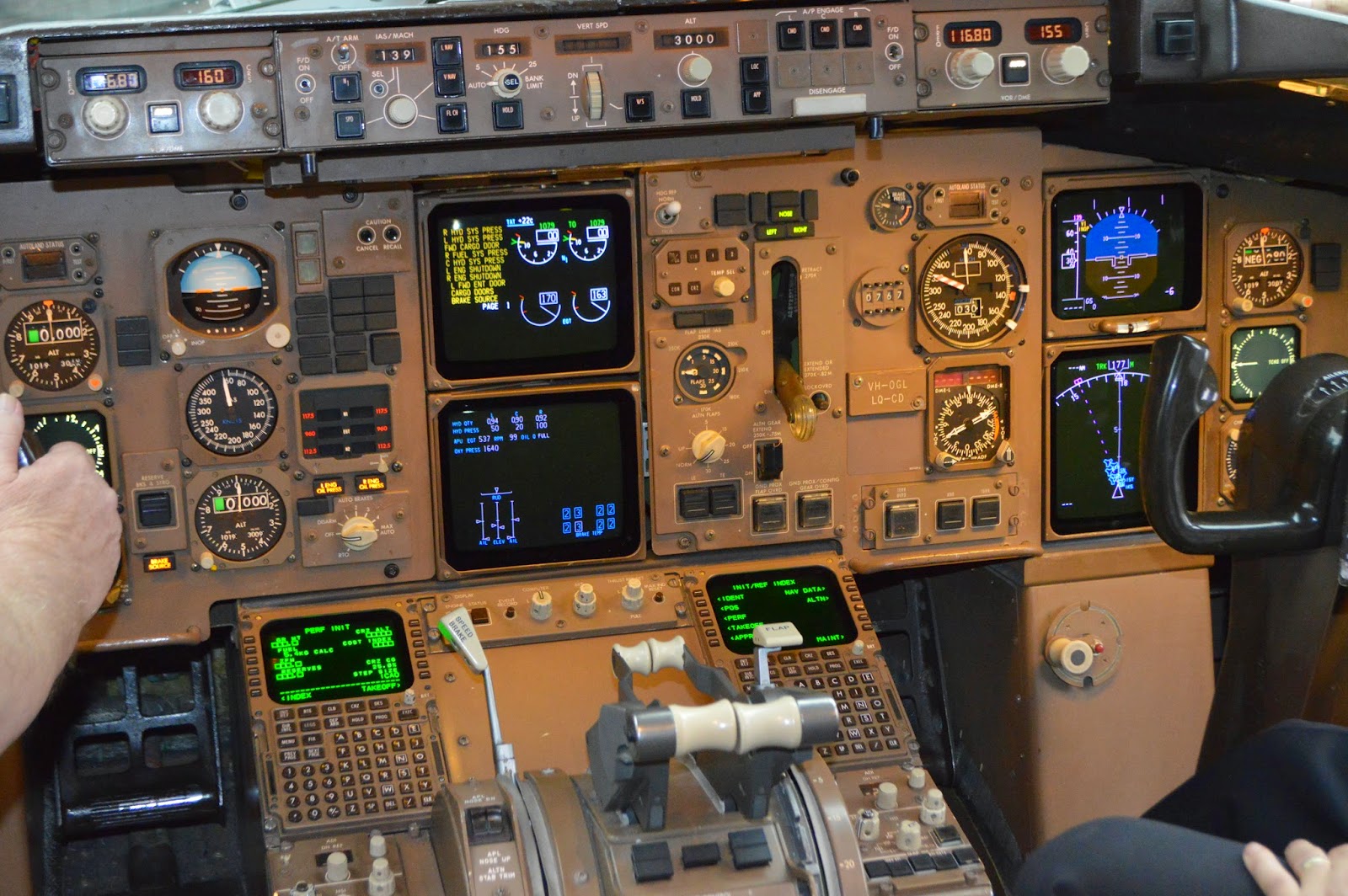 Still looking great for a 1980s design really. It's a nice mix of digital and analogue isn't it? 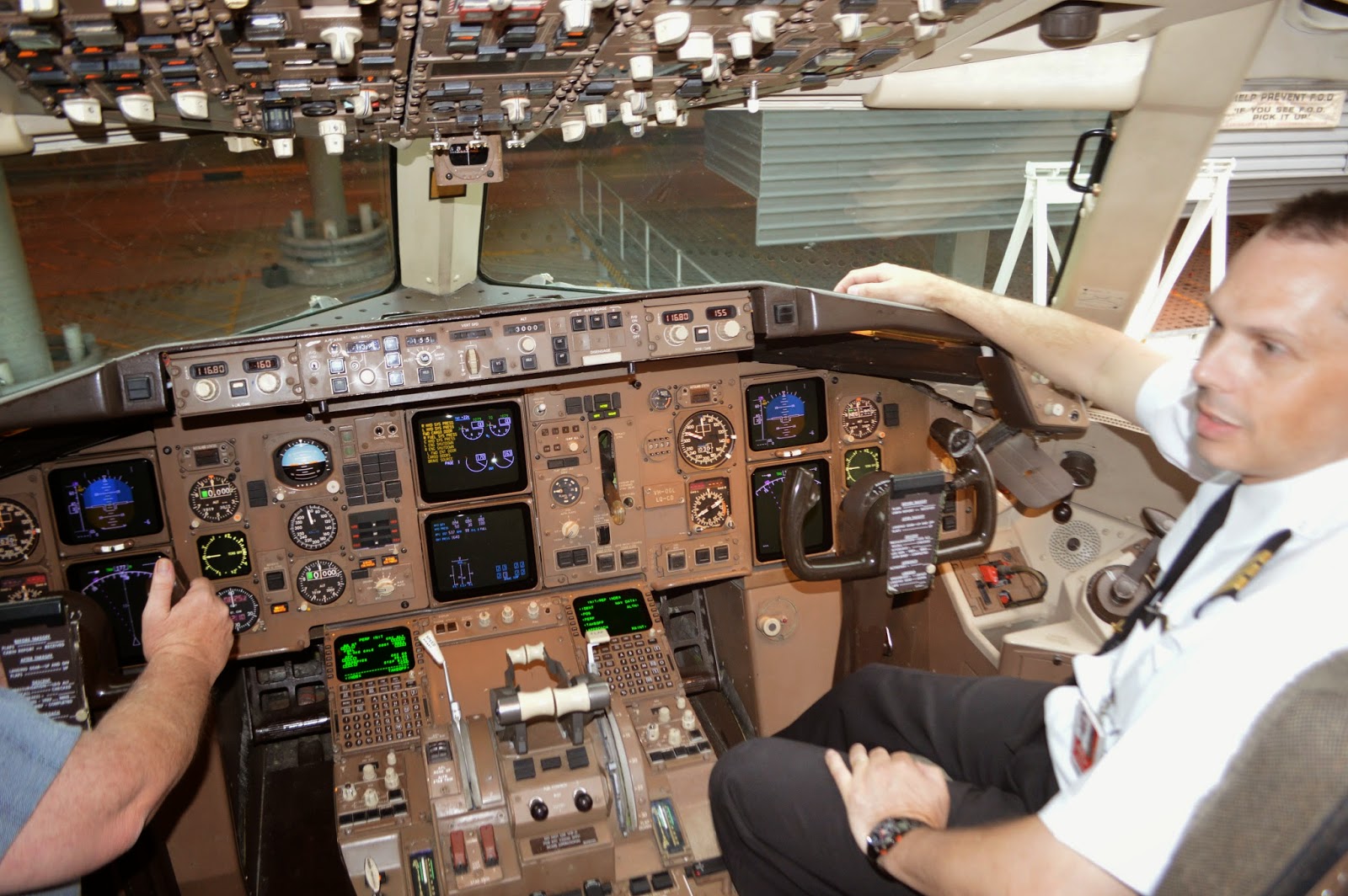 After we got off I went for a few last drinks at the Qantas lounge with some of the other passengers. What an amazing experience I had... Qantas really did a great job of organising the day, it was just incredible. I will not forget it for the rest of my life!