I arrived at the terminal and proceeded straight through security, making use of the Qantas business class dedicated priority security queue. Once through there I had lunch in the Business/Platinum lounge with good views of the tarmac. I grabbed my boarding pass at the customer service desk and headed in. A hot beef pie was on offer along with various salads, soups, sandwiches etc, I took the pie and I had a white wine with it (yes, I know it's not a good match!). 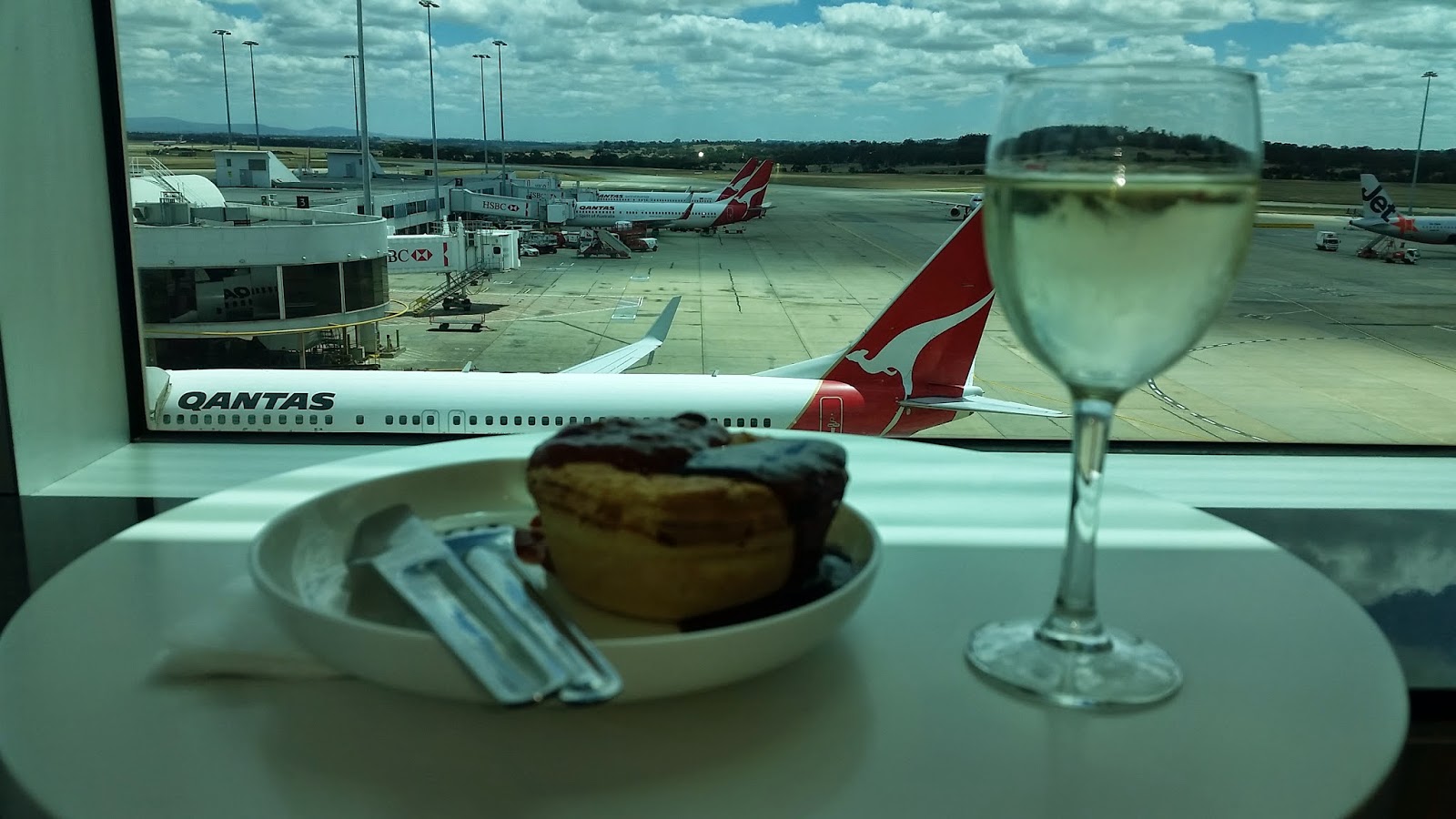 Whilst I was eating the inbound aircraft arrived from Sydney and parked at the gate: 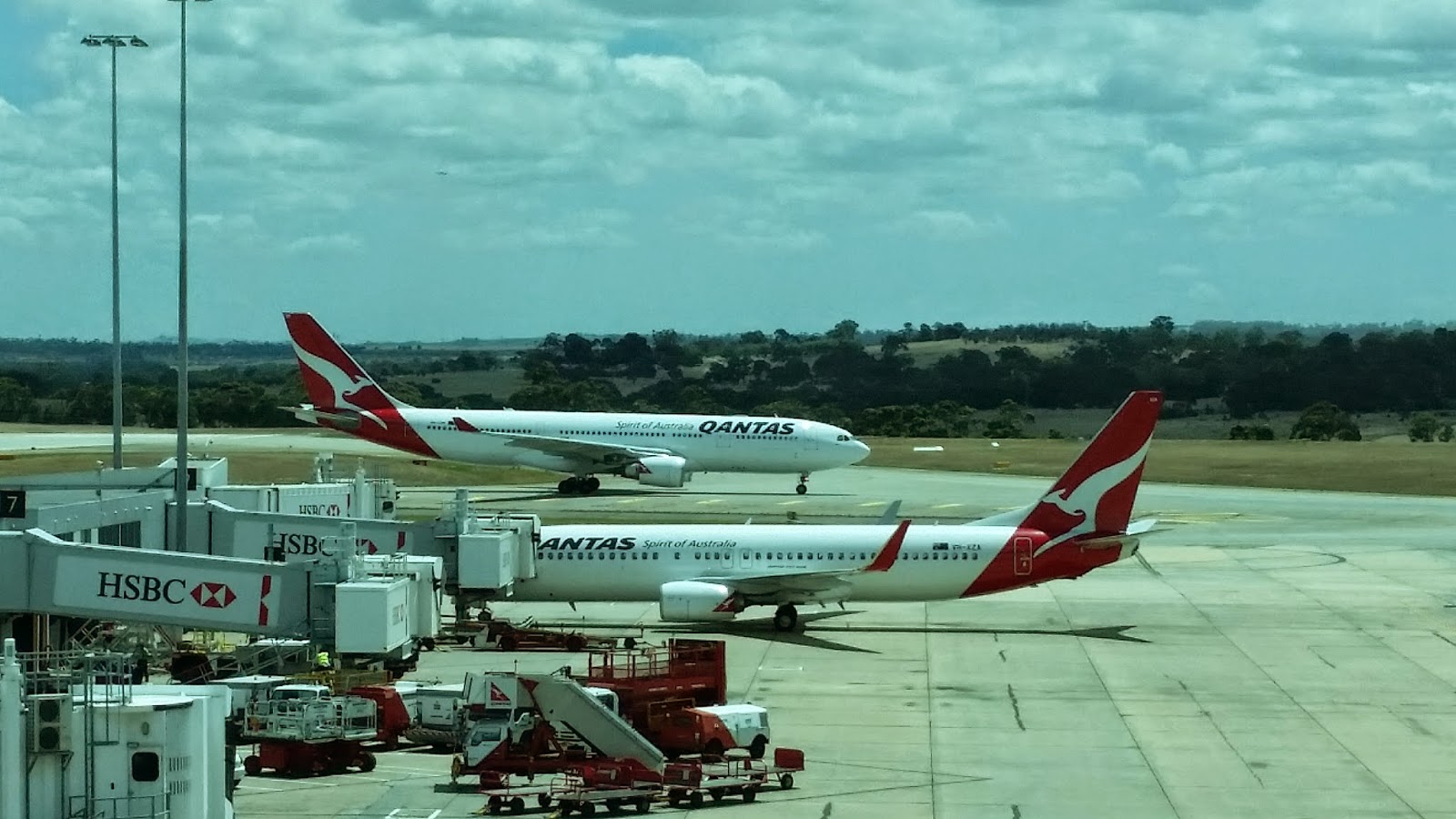 One point of differentiation that Qantas have on the ground is a separate upgraded lounge for business class and platinum members, it's supposed to be a little better than the standard Qantas club. I was happy with it on this visit, staff were friendly and I enjoyed my pie.

Boarding was called in the lounge and I  headed to the aircraft. I was in 1K  on this sector, a bulkhead recliner seat. These aircraft will eventually be re-equipped with flat bed seats but for now most are still the older recliner. Seat pitch is about 38 inches, quite poor but sufficient for a 1 hour sector. 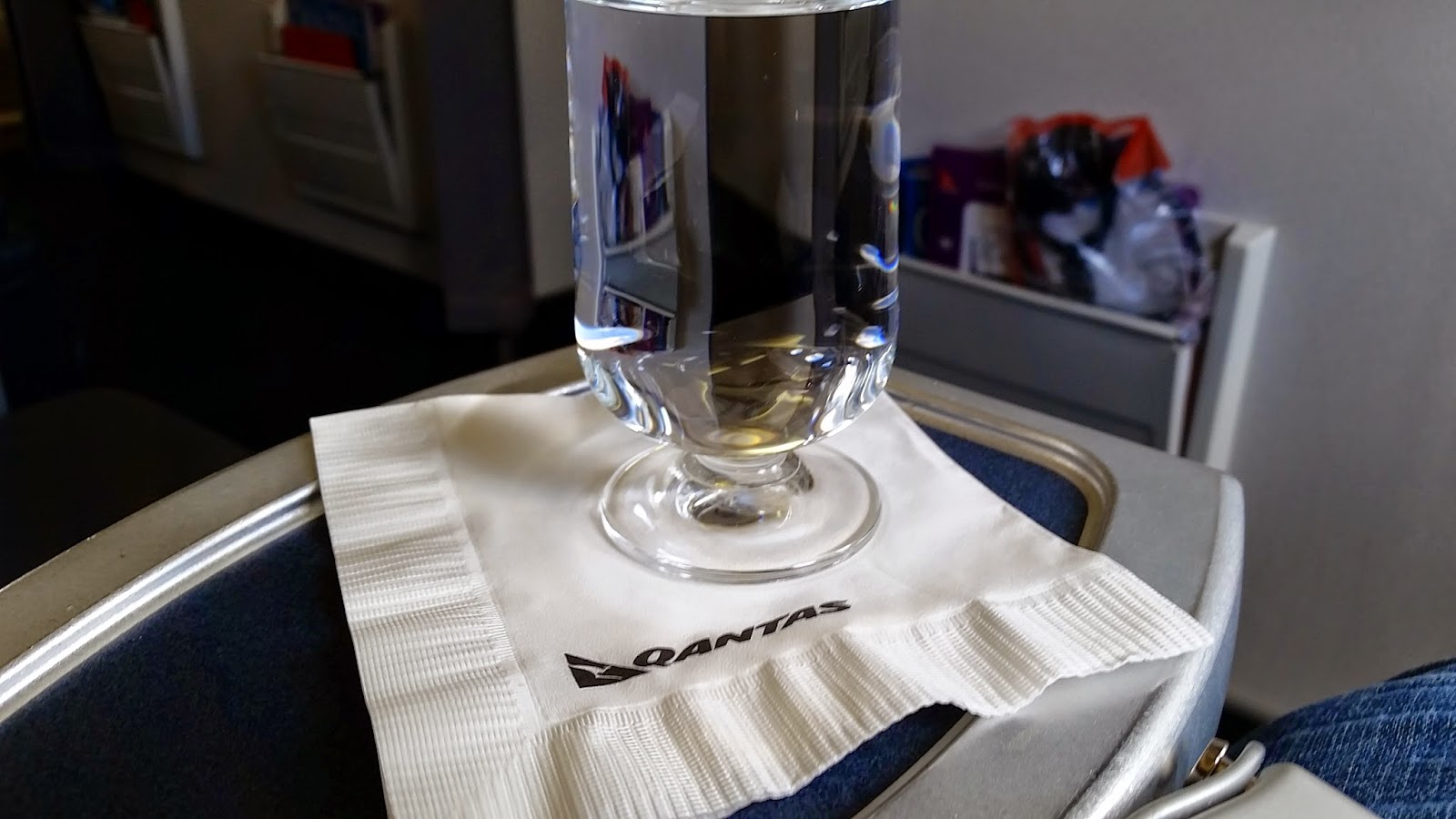 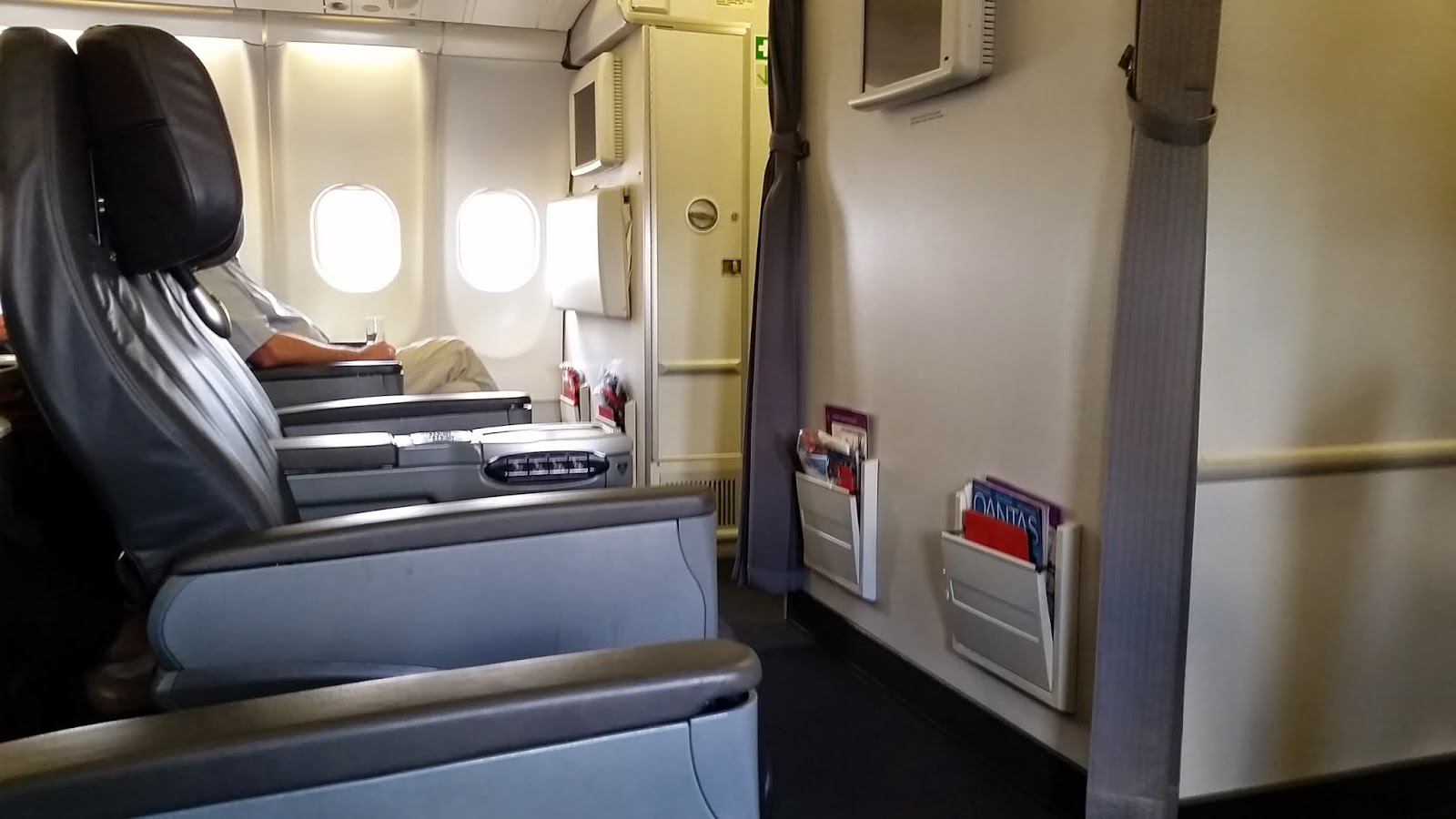 Pre departure drinks were offered, juice or water, I took the water. The flight wasn't particularly full and thankfully the seat beside me remained free.

As this is an ex-Jetstar aircraft there are no on demand personal entertainment screens. As an interim measure before the aircraft are reconfigured iPad's connected to a WiFi streaming system are provided. A good selection of TV shows and movies are available. The headsets are poor quality so I recommend bringing your own.

We pushed back on time at 2pm, departing towards the south before making a series of right hand turns and heading north towards Sydney. 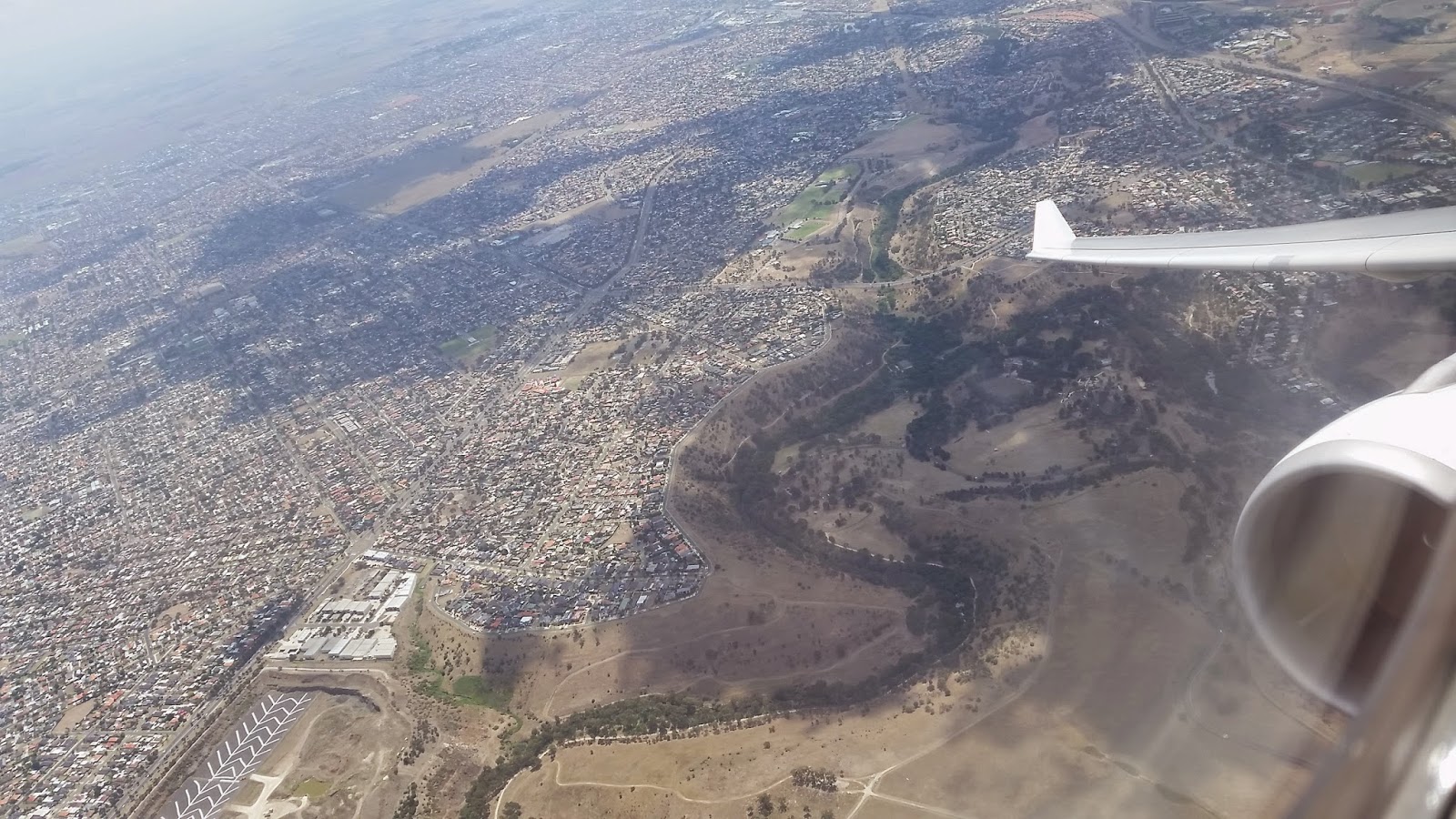 The inseat controls are in the centre console: 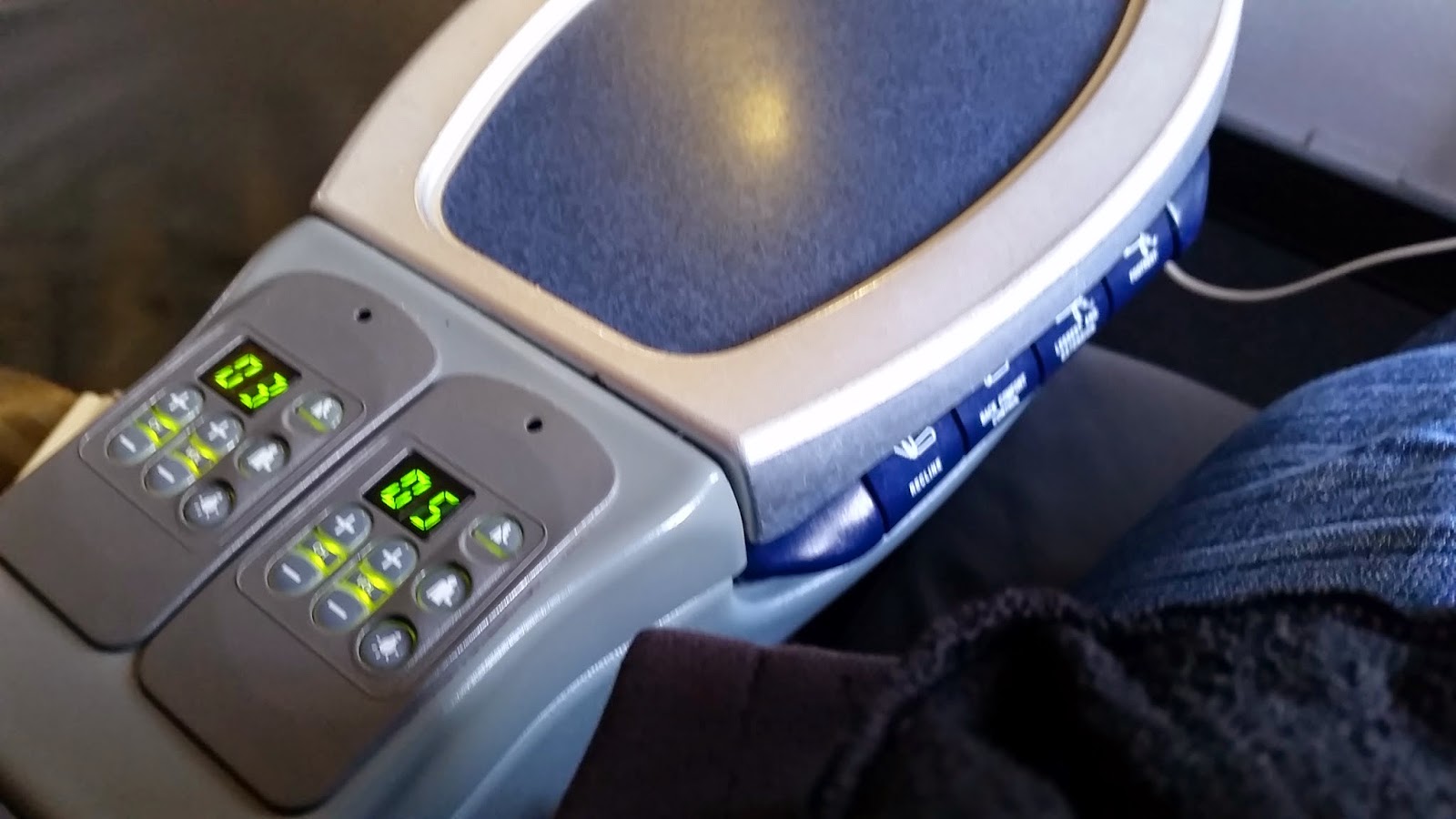 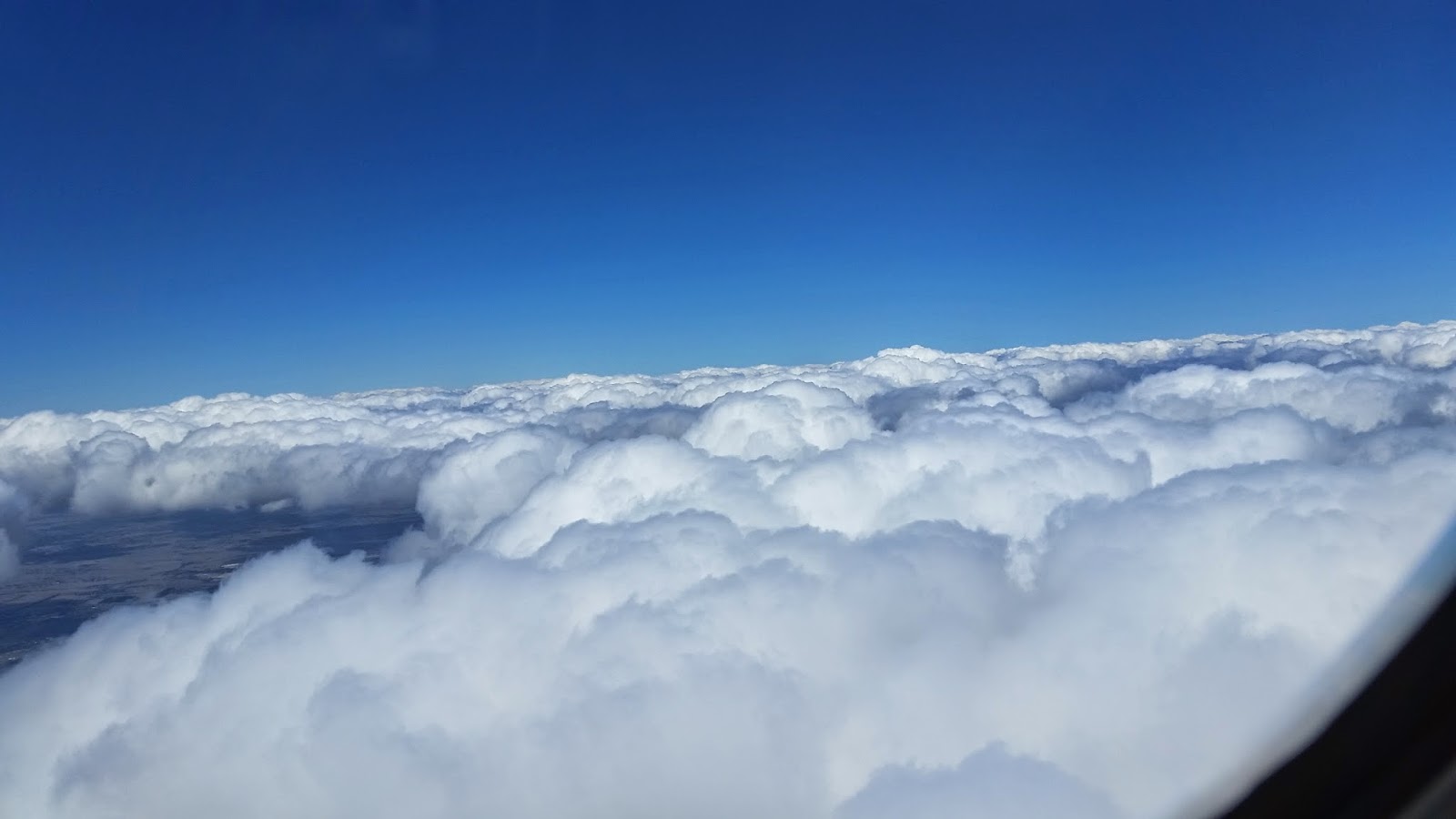 As this was an afternoon flight it was classified as a refreshment service. A choice of a soup, salad or cheese box/plate was available. Since I had eaten in the lounge I decided to have the cheese. It comes in a box on a tray along with crackers, bread and a dessert. I had a nice glass of white wine with it. Qantas only offers a single white and a single red on these short haul sectors. Sparkling wine is also available upon request. 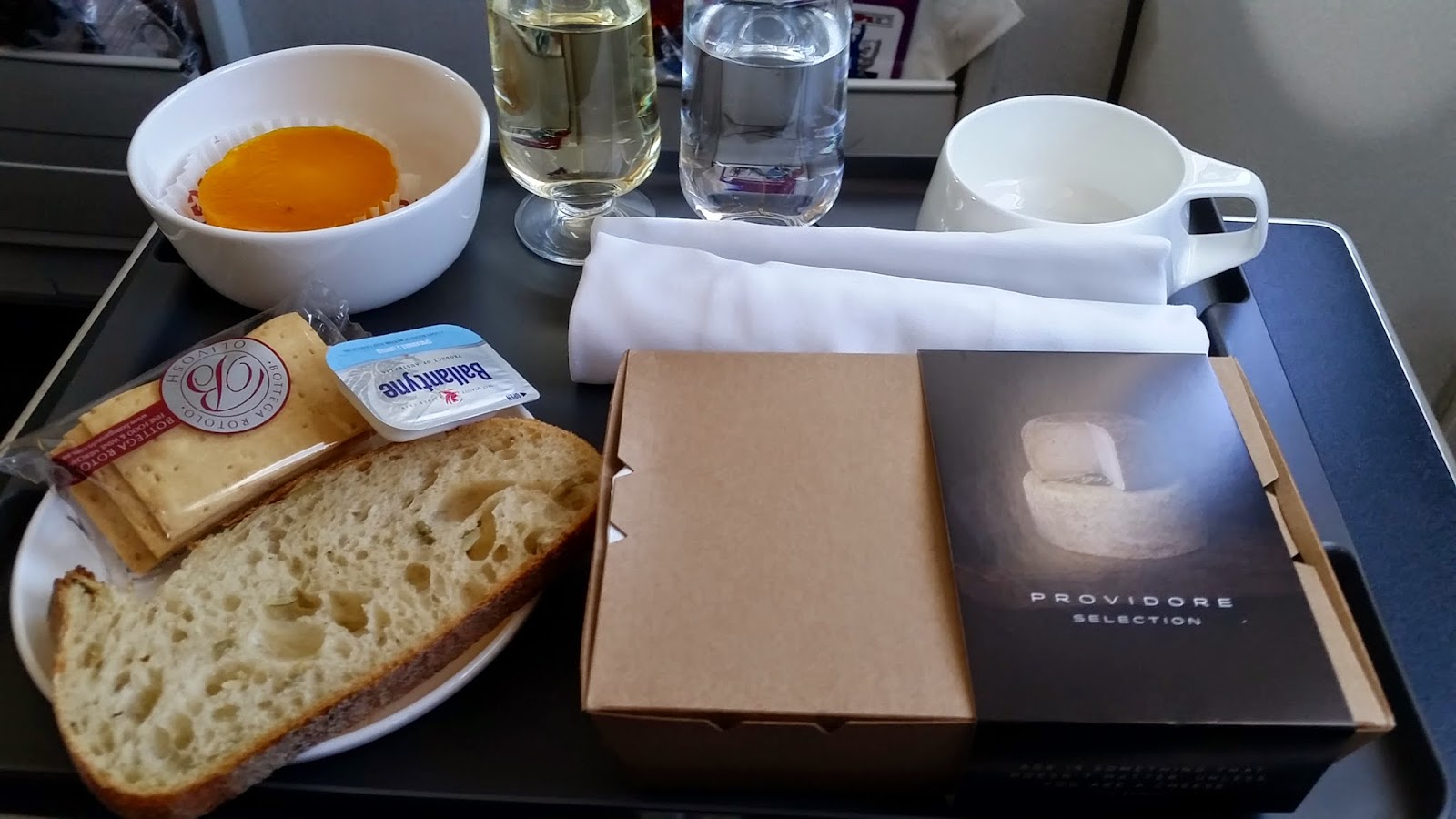 The food is nice , and is quite filling and of a good size for a 60 minute flight. Presentation could be improved. I think I would prefer it on a plate, it can be a little awkward using the box. The crew were attentive and polite and regularly topped up the wine.

Landing was towards the south meaning we flew north past the airport and made some right hand turns before landing. 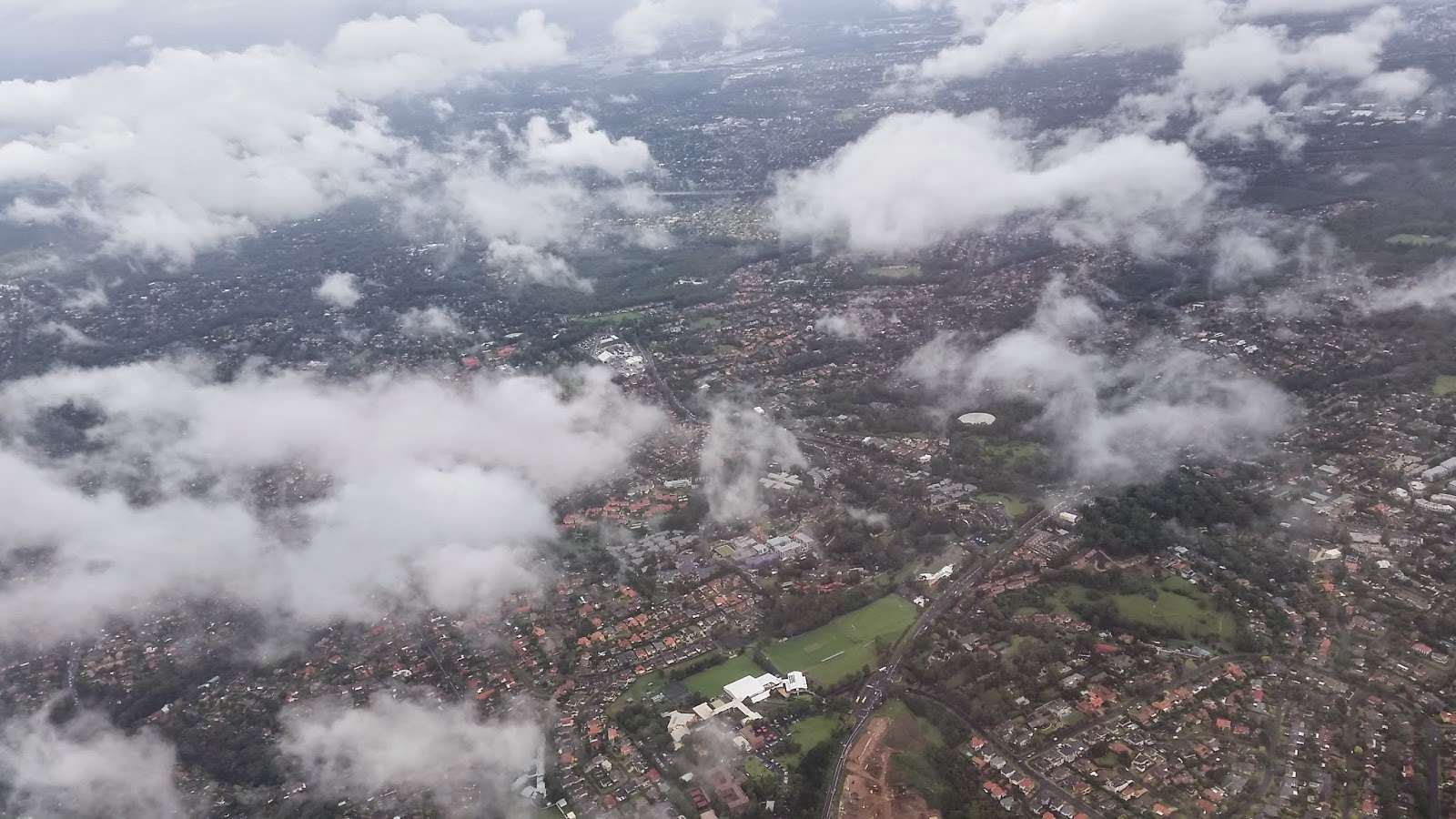 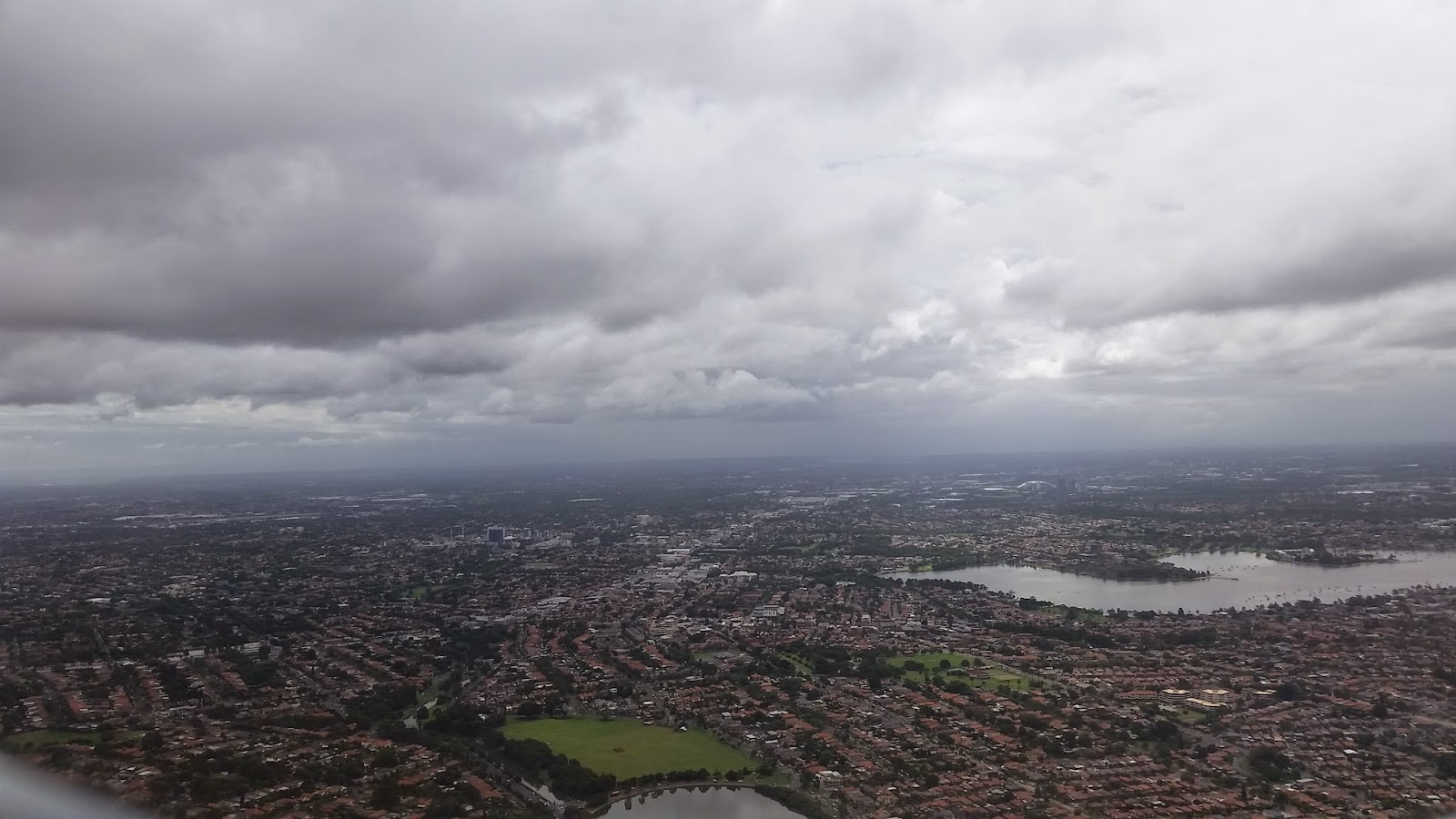 The weather wasn't too great in Sydney but the landing was smooth and we arrived at the gate about 5 minutes behind schedule. All  in all a pretty standard experience on Qantas domestic business class. Reasonable food and wine, polite staff and an on time flight. I do enjoy the extra space in the A330  compared to the 737. There is currently a choice of about 4 or 5 daily A330 flights between Melbourne and Sydney with the remainder being B737's. I do find myself choosing an A330 when my schedule allows it.


Next report will be the second sector on Qantas business class, Sydney to the Gold Coast.
Airbus A330 business class Qantas trip report virgin australia