- June 05, 2015
Yes, I have yet another review of Thai Business Class. I'm not sure why I keep bothering really, as nothing has changed much in the past 7 years with Thai and it's business class operations to Melbourne. We did see the B777-300ER for a while, but for now we are back on the -200 and -200ER, with the very occasional substitute. So here is another quick look at TG466, the 2.15pm service from Melbourne to Bangkok.

First, the very tired and aging Air New Zealand lounge in the dungeons of the terminal (basement). This lounge is still ok but it really needs a refurb like it's Sydney counterpart is currently undergoing.


Eventually the boarding announcement was made for the Bangkok flight and away we went to find HS-TJT parked at the gate. This B777-200ER was brand spanking new when I first started flying Thai out of Melbourne in 2006, now she is 8 years old. The seats remain the same as the day she was delivered, 262 economy and 30 in angled lie flat business, with all having audio video on demand. 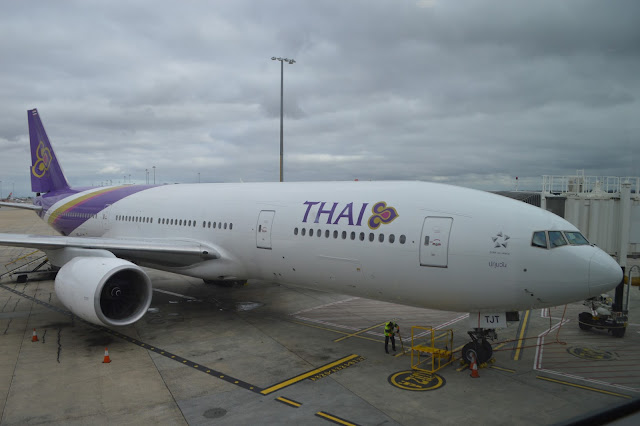 Here we have the lovely Pierina making her debut at aussieflyer.net, seated in 11B and enjoying a champagne pre departure: 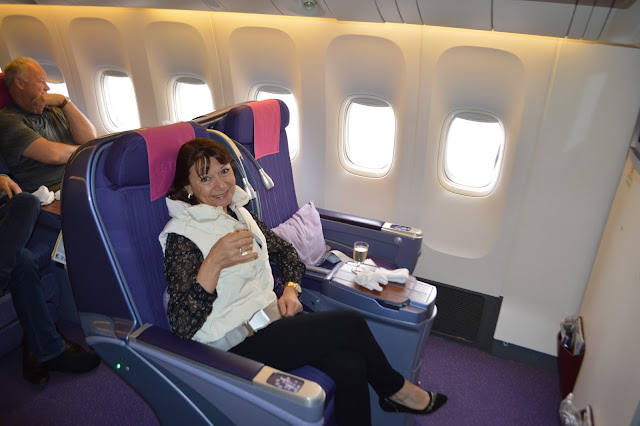 The seats are very roomy but are really very dated now when compared to the likes of Cathay, Singapore, and even Qantas with the new A330 suites being installed (review coming soon!). Still, for a daytime flight to Bangkok they are quite comfortable.

One thing Thai can be reasonably reliable on in Melbourne, is departing on schedule. This flight in fact left the gate a few minutes early and we were soon up and away and leaving overcast Melbourne behind: 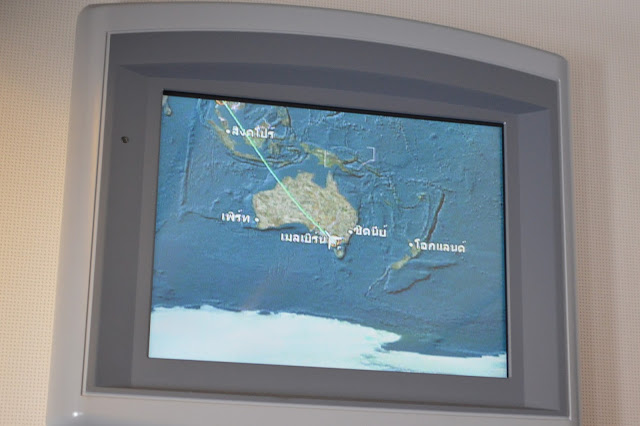 The crew were quick to set up the drinks trolley and they were soon in the aisle distributing packaged nuts and drinks for everyone:


Followed just moments later by an appetizer of tandoori prawn skewers. There was no time to nibble my nuts before the prawns arrived! 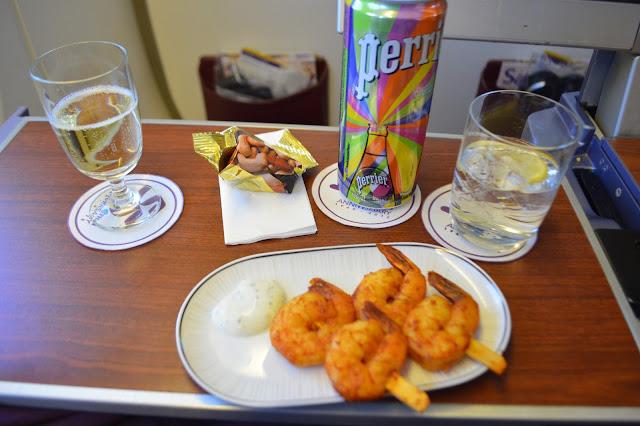 Thai are always fast to get the meals out.... today we start with some smoked trout and scallops, a typical Thai seafood starter. Of course there is no other choice of starter so if you don't eat seafood then too bad! My main was the pork fillet with potatoes, beans and carrots. It was quite tasty and I do appreciate the slight improvement in meal presentation with the new dinnerware introduced last year on long haul business. 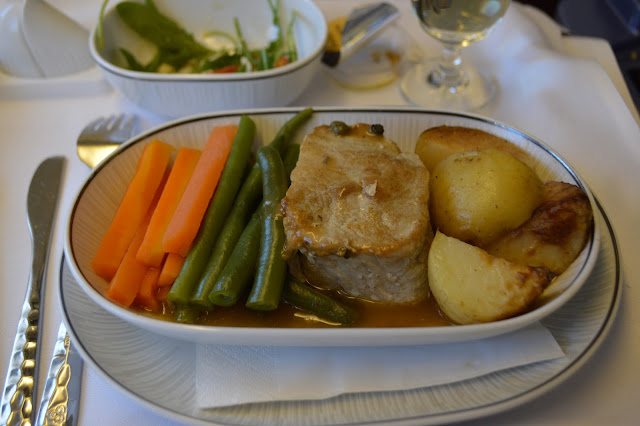 Then it was fruits, cheeses and crackers: 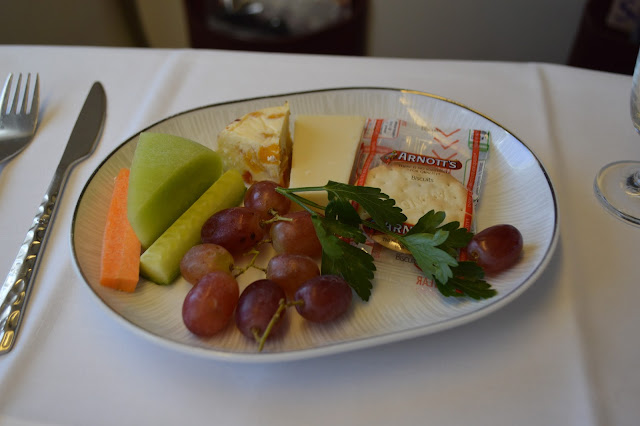 Followed by dessert, tea, cofee, liquers, ports, cognacs etc etc. Here I am partaking in a cup of tea AND a cointreau. 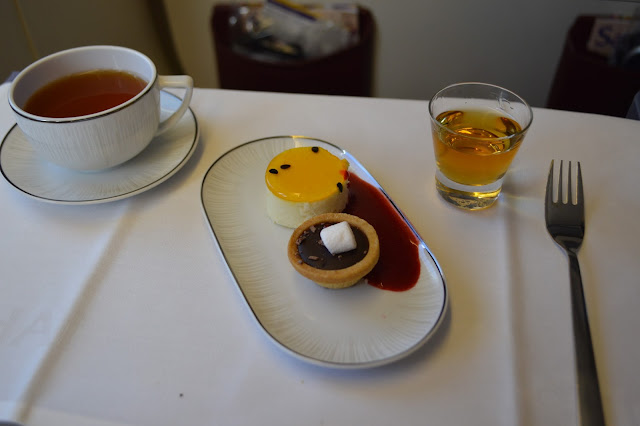 People do bash Thai a bit about their old seats and lack of meal presentation, but all in all it's still perfectly reasonable and you won't go hungry. After finishing the late lunch/early dinner, it was time to catch up on some sleep.

I woke up over South East Asia and the sun was setting: 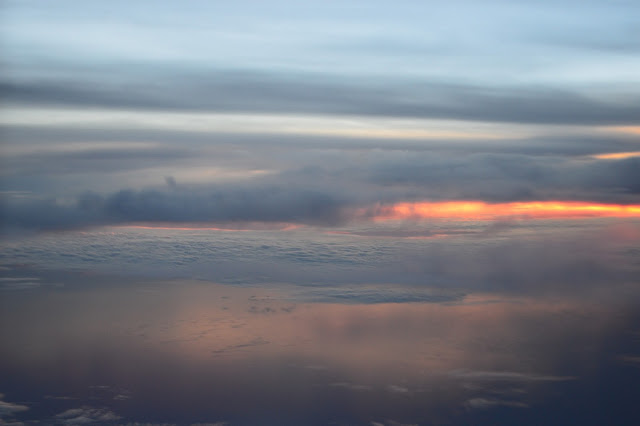 There is always time for some more food, here is the simple 'second serving' - which was a fried noodles with prawn dish, some fruits and 2 ferrero rocher chocolates. Followed by tea and coffee. This was served 90 minutes before arrival. 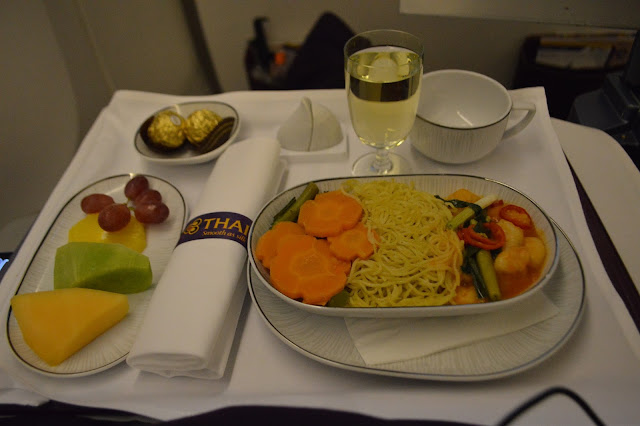 8 hours and 45 minutes after leaving Melbourne we landed on an unusually clear Bangkok evening. All in all a perfectly decent flight, with smooth flying conditions, a polite crew and reasonable food. It's still the best way to Bangkok from Melbourne, even if the seats aren't flat.