There has been a lot of hype from Etihad about their new Business Studio seat so earlier in the year I decided I had to try it! I was heading to New York but since the business studios only feature on the A380 and B787-9 Dreamliner, I decided to fly via Washington. Washington is the first long haul destination Etihad served with B787 equipment and is the only USA destination not served with Etihad B777's currently.

Having flown in from Colombo the night before and stayed at the Premier Inn at the airport, it was just a short stroll across the road to the premium checkin zone: 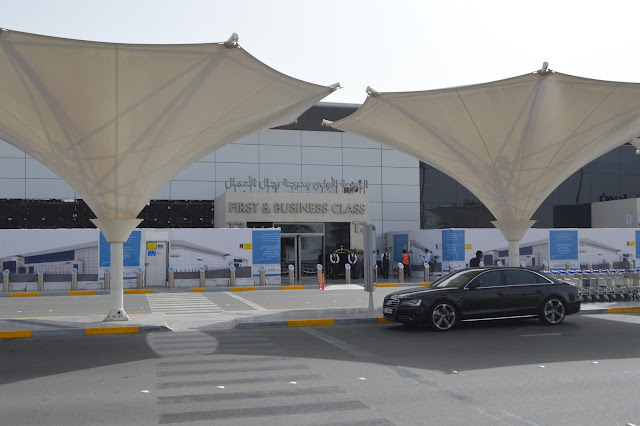 We were met as we crossed the road by a team of staff with luggage trolleys who scooped up our bags and escorted us inside the business class check-in zone. With check-in complete we headed for the recently opened 'Premium Lounge'.

It was pretty quiet and I had a fairly nice breakfast from the buffet area. I ordered some coffee's at the bar which were delivered to the table soon after. Whilst there I filled in my US immigration forms as Etihad offer USA preclearance in Abu Dhabi.

I headed towards the dedicated USA gates about an hour before scheduled departure time to ensure we would get through with plenty of time. Fortunately it was fairly quiet and as an Australian I got to use the electronic kiosk/terminals, I was later told that I needn't have filled in the form as the terminals contained the form in an electronic format. It might have been nice to have been told that at check-in.

After briefly being asked about my purpose for visiting the USA by the immigration agent I was cleared and heading through security. Everything was going very smoothly, contrary to some of the stories I had read online of extensive delays with USA pre clearance in AUH. Perhaps the teething problems have been worked out.

My next stop was the brand new Etihad USA Pre Clearance lounge for premium passengers. I arrived in the lounge with 45 minutes until scheduled departure time but I was refused access. The lounge staff member told me the flight was already at 'Final Call', so I rushed to the gate. Upon having my boarding pass scanned at the gate lounge I enquired as to whether the flight had commenced boarding and I was told not for another 10 minutes.

I was pretty furious about the miscommunication between the lounge and the gate as I was then forced to sit in the gate area when I could have been relaxing with a drink in the lounge. I made it pretty clear to the staff that it wasn't good enough. The gate staff called the lounge and told them the flight had not even started boarding but by then I decided it was too much hassle to backtrack to the lounge so I went and had a look at the aircraft: 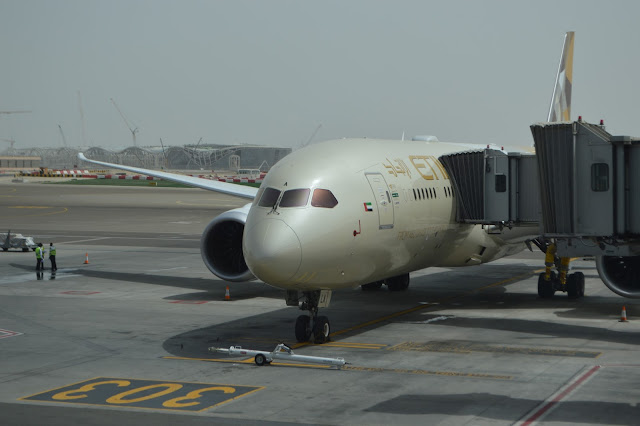 The flight today was being operated by A6-BLA, the first of Etihad's Dreamliners, delivered new in December 2014. I was very excited as boarding was called and I headed straight down the jetway to be greeted at the door by a friendly cabin crew member. The B787 has two business class cabins with 28 seats total, one mini cabin located just behind First Class consisting of two rows, and the other larger cabin behind door 2. I was seated in the mini cabin but the crew member directed me to turn right from door 2, I questioned this and was then redirected to the left. It seems I know the cabin layout better than the crew?

Moments later I was storing my stuff at my seat, 6A and my travel companion Pierina was getting comfortable in 5C, a rear facing seat just ahead of mine:


If you like privacy and a view definitely try and get the A or K seats on this configuration. As you can see they are close to the window and quite private as they are away from the aisle.

The seats are stunning, so much space and very stylish. I absolutely loved it and both of us were super excited to be on board. The seat goes fully flat and is comfortable in lounging positions too. There is plenty of storage and of course power outlets and usb ports. 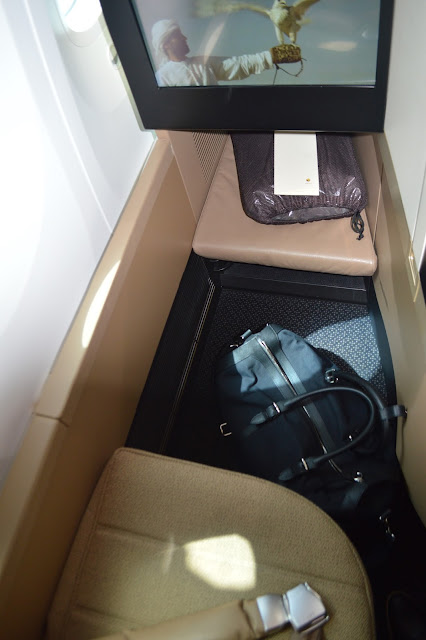 The blankets and menus were already at the seat, and a few moments later the welcome drinks came out, and I had the Jacquart Champagne. Delicious, and I love that it's served in a full size champagne flute: 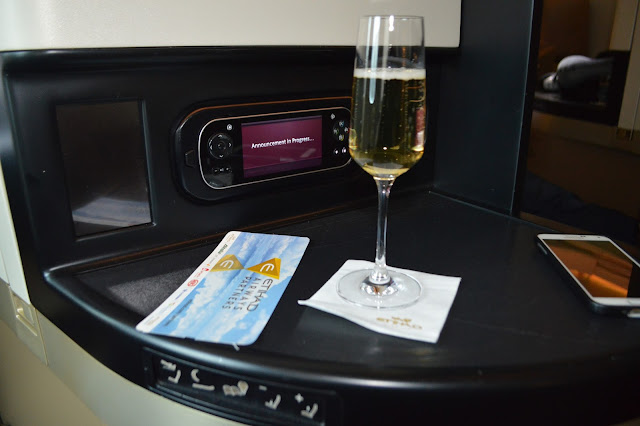 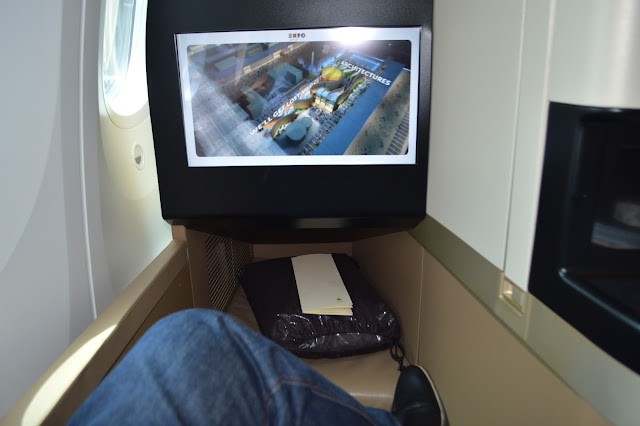 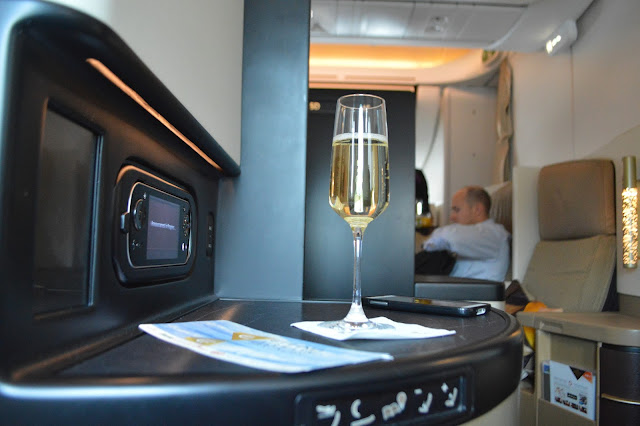 There are some manual buttons to adjust the seat (see above pic) plus a touch screen LCD menu as well (below pic): 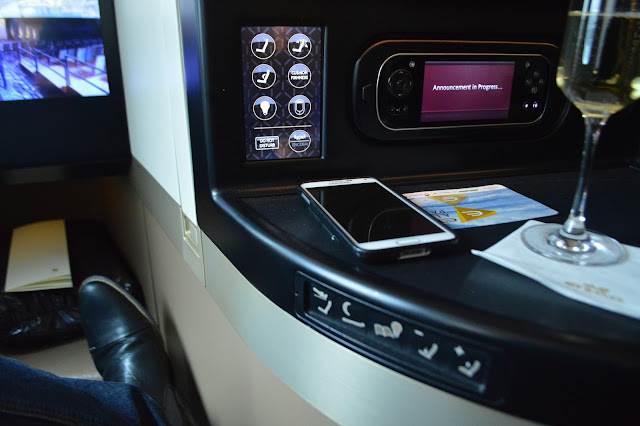 The handset also has a touchscreen LCD display and it can display the moving map at all times, so you can watch main screen entertainment but still know where in the world you are through the handset. The handset also offers seat to seat voice phone calls or text based chats with anybody on the aircraft. A great way to keep in touch with someone else on board!


There was a delay announced by the captain as one of our passengers had been refused entry to the United States so their baggage would have to be removed. That's a rather unique reason for a delay as normally that sort of refusal would happen at the destination, not the departure point. The delay seemed to be about 45 minutes but I just kept asking for more champagne and I was more than happy just to get familiar with the 'studio' and play around with the e-BOX entertainment system.

Eventually we departed, with quite low visibility initially: 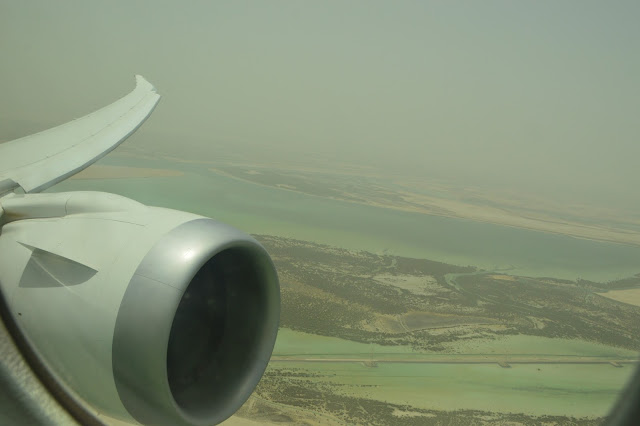 It didn't take long to get into the clear blue sky and I adjusted my electronically controlled window dimmer to a comfortable setting, whilst still being able to see the stunning scenery outside.

Etihad offer a completely customisable dining experience on long haul flights in both Business and First Class. The passenger can choose when to dine and can order whatever they want (subject to availability). The menu is quite extensive and offers something for everyone. It's worth mentioning that this particular flight is in daylight the whole way, as you are flying towards the sun. 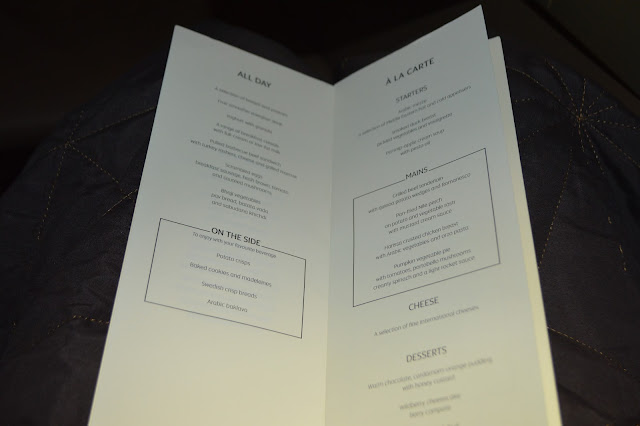 Soon after departure nuts and drinks were offered, they are warmed up and in a bowl, lovely! In the picture below you can see an example of the moving map display available on the handset: 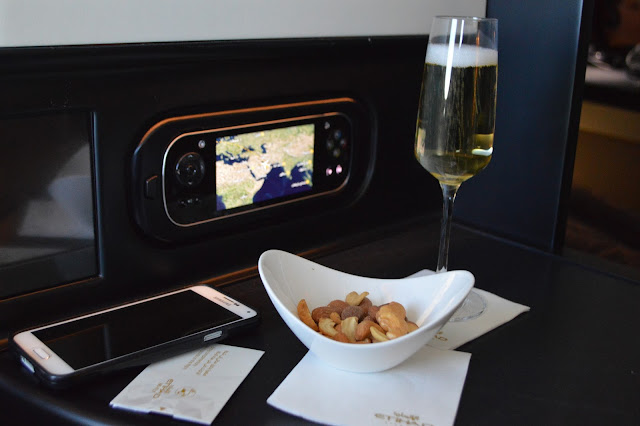 There was free wifi offered on this flight in business class. I was very excited to be able to stay in touch with friends and update them on the flight progress from my seat. The service wasn't exactly fast but it was unlimited and quite useable.  The movie/TV show selection was extensive and I doubt many people will run out of content to watch.

My first course was the smoked duck breast: 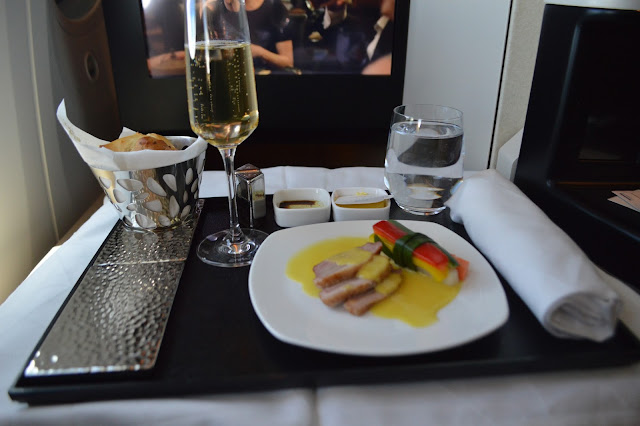 Followed by the fillet steak: 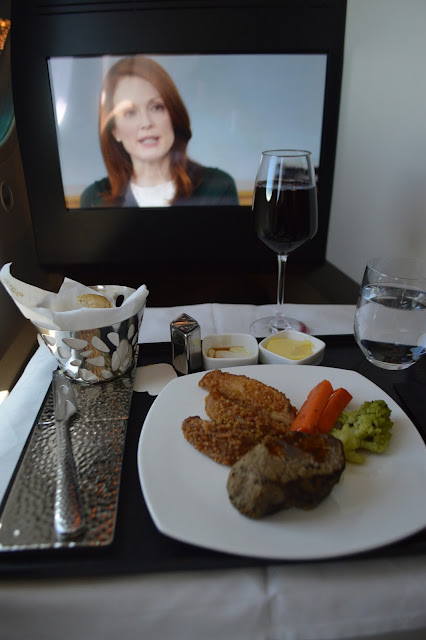 Then some cheesecake and a selection of cheeses and crackers. Served with a lovely dessert wine. 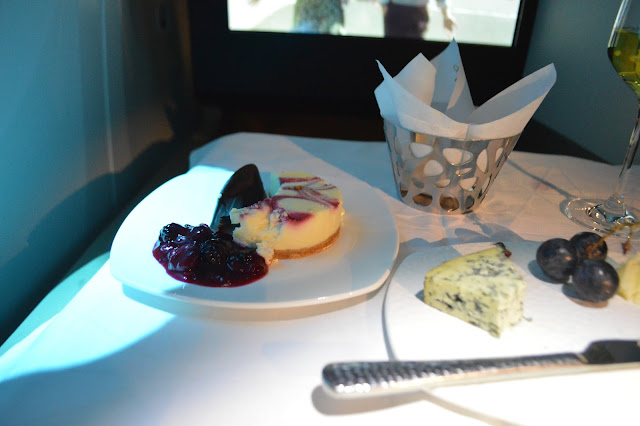 My lunch was delicious and beautifully presented. It's not quite as fancy as what's on offer in First Class, but it's pretty close and I was more than satisfied!

The crew were available throughout the flight and responded quickly whenever I pressed the call bell to order a cup of tea or coffee, or anything else!

I did sleep for a while during the flight and the crew placed a small mattress top on the seat to make it a little more comfortable for sleeping. Pyjamas are also provided and the blanket is very soft, making for a lovely sleeping experience. Amenity kits with toiletries, ear plugs, eye shades etc are also provided. The only thing I was not happy with was that the windows don't black out completely on the B787, and the sun remained in a position where it was shining directly into my window for most of the flight. The eye shades did cater for that small problem though.


After I woke up again somewhere over the northern Atlantic Ocean I ordered some chardonnay and some chips: 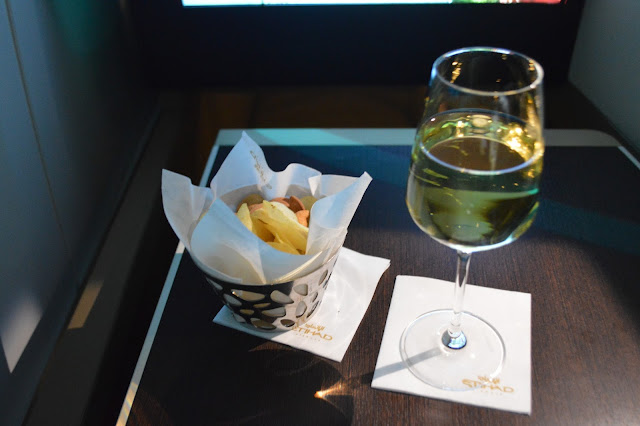 I watched movies for a while and as we aproached the North America continent I ordered a pulled beef with turkey bacon sandwich: 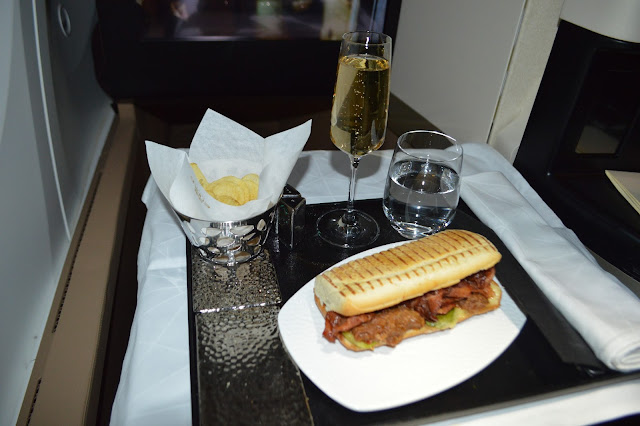 Followed by a chocolate pudding: 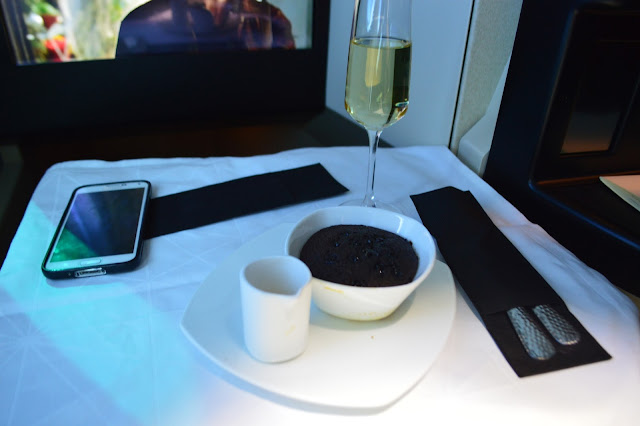 It wasn't long before we were on descent into Washington... 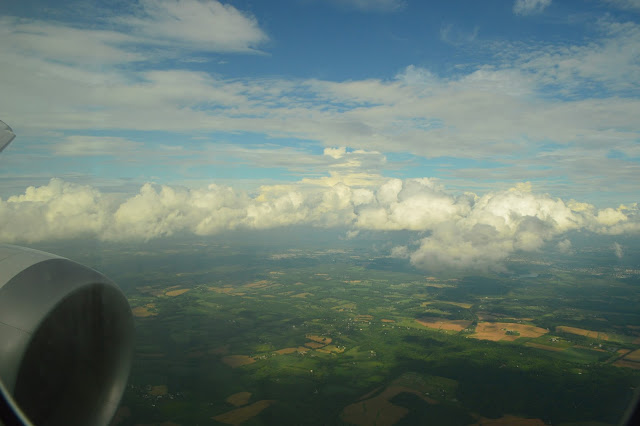 We made a smooth touchdown at 5.14pm, arriving on schedule despite the delay in Abu Dhabi. 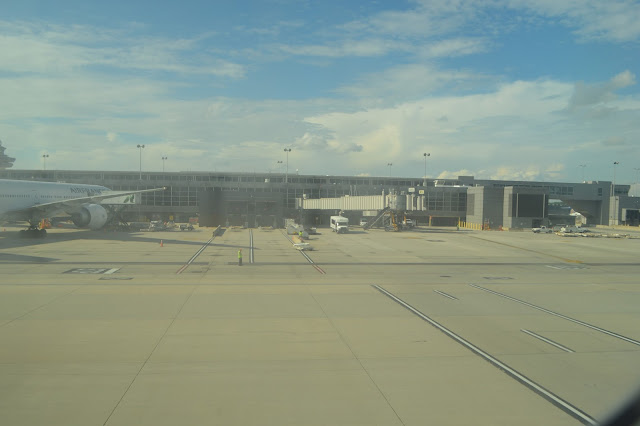 At around 14 hours, this flight was one of my favourites. The seat was so comfortable, service was top notch and the food was great. I really enjoyed the experience and I'm so pleased this seat is now available to us in Australia with the A380 serving Sydney and the B787 serving Brisbane.

Thanks Etihad for a great experience!