- October 23, 2015
I've covered most of my long haul premium travel for the year already (more content coming starting next week though when I travel again). So let's have a look at some of the other flights I've taken this year. I probably fly between 50 and 100 sectors a year, most of them don't ever make it to the blog as they are either repeats of flights I've already looked at or boring short haul domestic economy flights.

Anyway, here is a quick look at Qantas flight QF706, the 6.45am service between Adelaide and the nations capital, Canberra. Qantas fly the route just twice a day, a morning and an evening service, focused on business and government travel. I was probably fairly out of place occupying seat 1A and travelling purely for leisure on this Tuesday morning in July.


The Qantas club is rather busy in the early hours at Adelaide, with flights to all Australian major capital cities leaving in succession. Sydney, Brisbane, Melbourne, Canberra and Perth are all served from here with Qantas Boeing 737-800's.

Knowing that there would be a hot breakfast on board I had a quick cappuccino and some bircher muesli in the lounge before boarding was called at about 6.25am.


At 6.30am I was on board the aircraft which featured the newest leather business class seats with AVOD, but was not in the Boeing Sky Interior configuration. These are the standard domestic recliner business seat with fairly limited recline and pitch but they do offer leg and foot rests. Quite ok for 1 to 2 hour flights.

I sat in 1A quietly hoping that 1C would remain vacant to give me a bit of extra space.

Welcome drinks were offered and I selected a glass of juice as the rest of the passengers filed past. Most were in business attire although there was a few families thrown in as well. For those who reside in Canberra or wish to visit, there are NO low cost carrier services to that city. They were once served by Tiger but that is a thing of the past. Even Jetstar don't serve Canberra at this stage.

Fortunately for me my wishes came true when doors were closed and we started pushing back at 6.43am with a light load up front and 1C free. The safety demo was completed and after a short taxi to the runway in the still pitch black morning we lifted off at 6.54am local time (7.24am in Canberra). 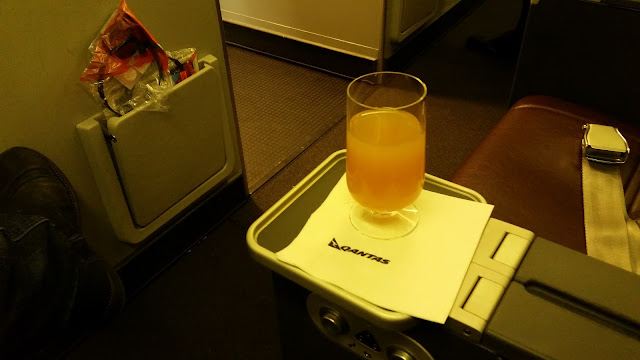 As we climbed through a low layer of cloud we broke out into the clear skies where a lovely sunrise was able to be seen: 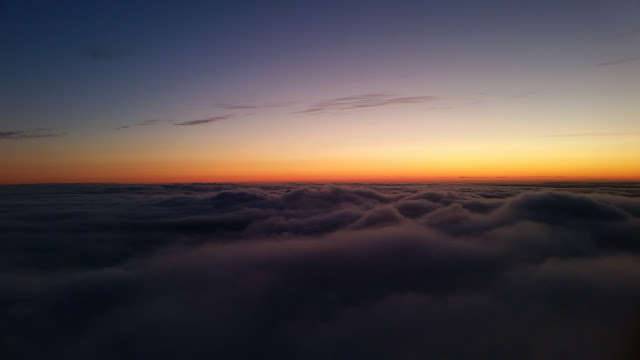 Conditions were smooth so the seat belt sign was quickly extinguished and the flight attendant serving business class sprung into action. Being in 1A I was first to be served. As is usual I was greeted by name and offered a choice of either the hot breakfast or the cold option (I believe muesli). Today, as always, I took the hot option. It was poached eggs with sausage, spinach and mushrooms. When the flight attendant asked what drink I would like I asked for the sparkling wine (YES, I am aware it's 7am but hey I am flying for leisure and haven't you ever heard of a champagne breakfast?).

The flight attendant seemed almost shocked that I had asked but at the same time she was very pleased and happy to oblige, immediately opening a piccolo of sparkling wine for me. I suppose they are not particularly used to a leisure traveller up front going to Canberra at 6.45am from Adelaide, I expect there are not many of them around! 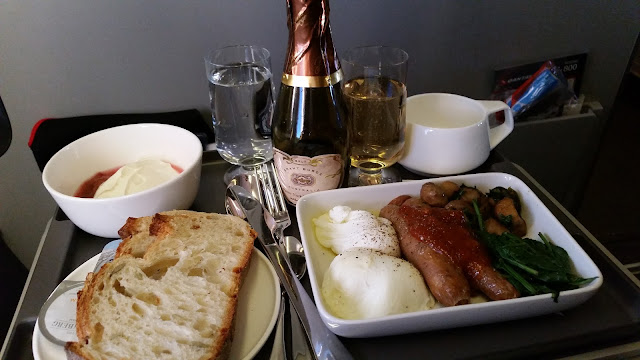 The poached eggs with sausage were delicious, the eggs were perfectly cooked with lovely runny yolks. Well done Q Catering Adelaide. It came with a bowl of yoghurt and sourdough bread was also offered. Later the flight attendant came around with orange and poppyseed muffins and more sparkling wine was also gladly offered, to which I actually declined today as I had to pick up a rental car. 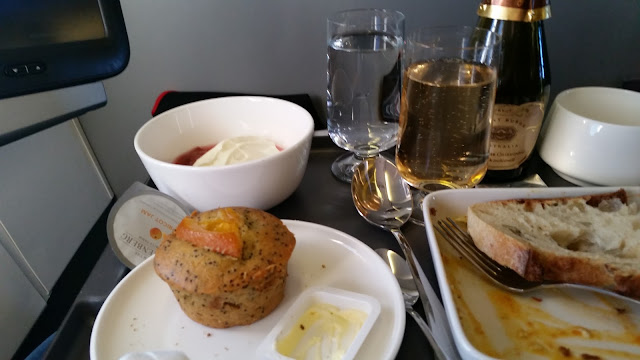 After about an hour of flight the descent commenced over the alpine mountain areas which were snow capped at this time of year, even some mountains close to Canberra were covered in snow. The temperature for our arrival was right on freezing 0 degrees Celsius. 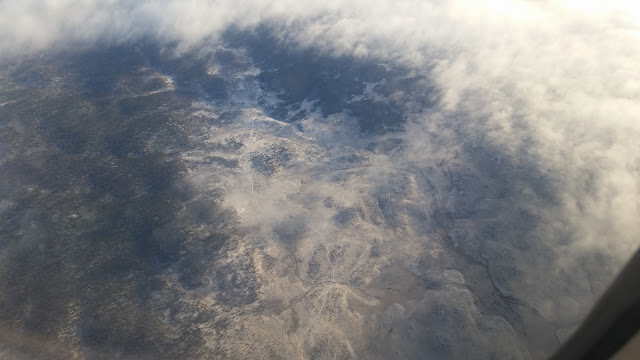 Although it was cold the weather around Canberra was beautiful! 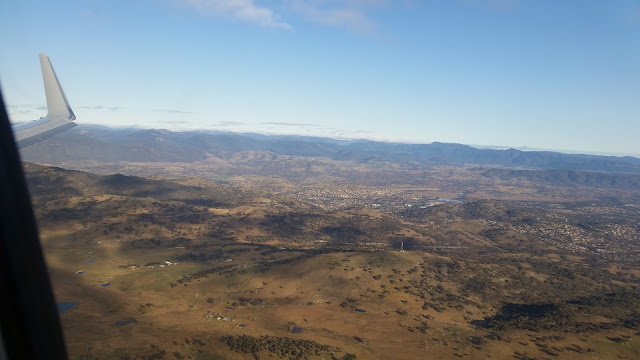 After 1 hour 21 minutes airborne we made a smooth landing and did a u-turn on the runway before making our way to the still almost new domestic terminal at Canberra. 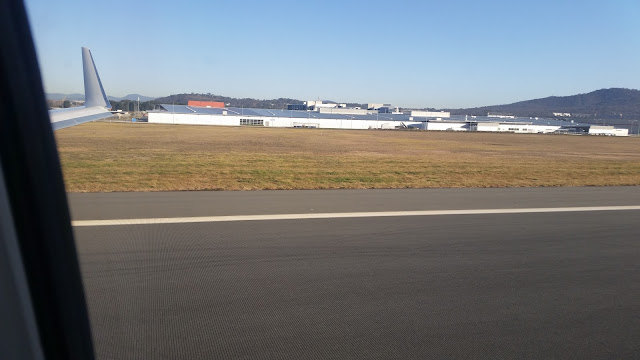 At 8.49am local time we parked at the gate, 1 minute ahead of schedule. What a wonderful morning flight, I do love watching the sun come up from a nice comfortable seat on a plane. Loved the food and service on this sector too, thumbs up Qantas!