- August 08, 2017
My next series of flight reports will be from a trip I did early this year to the USA and Mexico.

Here's a quick look at the first leg of the trip.  I was flying Virgin Australia via Sydney to Los Angeles. To get to Sydney I took VA811, the 7am flight featuring breakfast service. Here's how it went!

I checked in at the business class counters where I received my boarding pass for both the MEL-SYD and the SYD-LAX sectors, my bags were checked right through to LAX. I was given my boarding passes in a wallet with a bus ticket for the transfer in Sydney and my international departures card. Then it was onto the lounge...


With about 20 minutes before departure boarding was called and I made use of the 'premium exit' from the lounge which takes you straight into the priority security in the departures pier. Unlike Qantas, the Virgin lounge is prior to security screening, which I think is a bit of a disadvantage.

It was a nice summers morning and we departed on time and were soon being service breakfast. If you haven't seen what the seats are like on Virgin's 737s in business here is a promo shot from the airline: 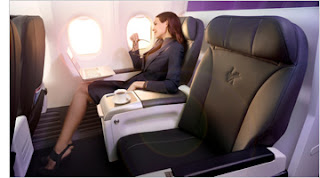 They are basic recliners with no foot or leg rests and only some aircraft have inseat power. They are certainly comfortable enough for the 1 hour hop up to Sydney. For breakfast I had this sausage and beans meal which was quite a change from the usual omelette: 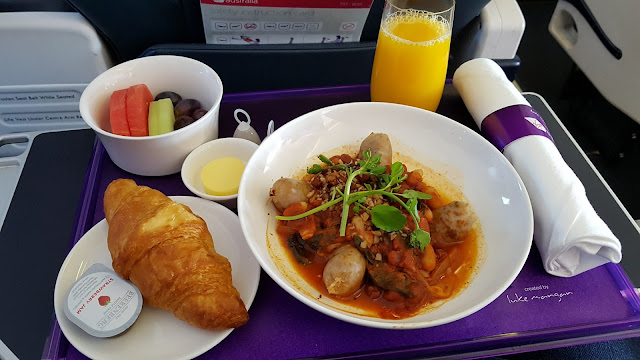 It was actually very tasty and came with some fresh fruit and a croissant with butter and jam. I even had time on descent for a nice cup of tea, and the flight attendant even gave me a biscuit with it, wonderful service! 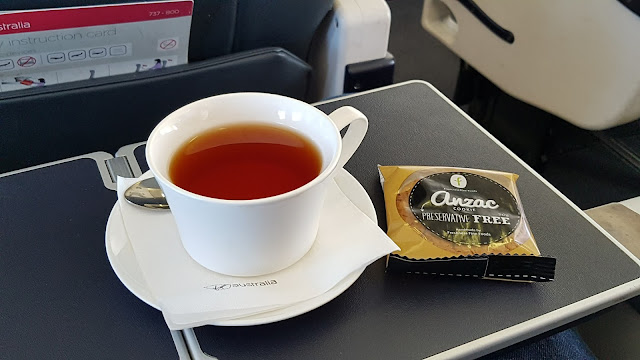 A really impressive offering for a morning flight and one that I think tops Qantas in presentation by far! This was a great flight with great service, well done Virgin.

Next report will be the VA B777 ride over to LAX. Stay tuned!