I arrived in Taipei at noon from Bangkok for the purposes of positioning to Taipei for a status run. You can see the inbound report here: TG634 Bangkok to Taipei.

After disembarking from the last flight I went and found the Cathay Pacific transfer counter. I had originally been scheduled on a 4pm departure to Hong Kong  connecting to Bangkok, but I asked if I could be moved to an earlier flight to HKG. The transfer desk staff member was more than happy to help, although he was completely puzzled when he asked which flight I had come in from. 'Come from Bangkok... go back to Bangkok'... he whispered to himself. I explained I am simply a flying freak and he had a laugh and presented me with a boarding pass for the next flight to Hong Kong, departing in about 1 hour. He also gave me my boarding pass for the Hong Kong to Bangkok sector as well as lounge invitation for both Taipei and Hong Kong.

I went in search of the lounge for a quick drink before the next flight.... 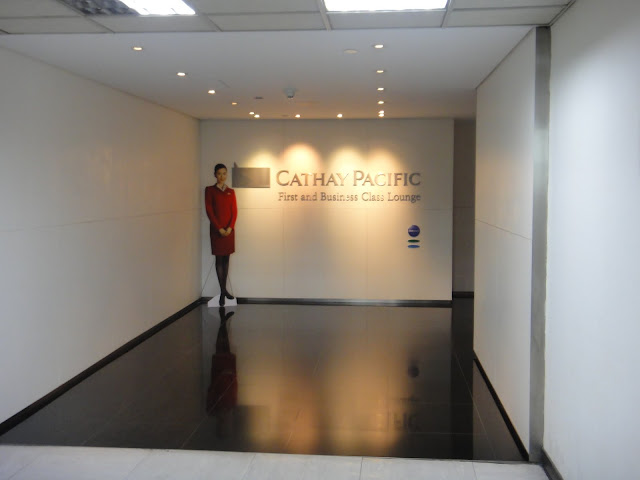 Cathay Pacific Lounge Entry - Taipei
I was pretty full from the inbound flight and anticipating lunch on the next sector so I just had a vodka and orange and surfed the net for a while. Here are some pics from the lounge: 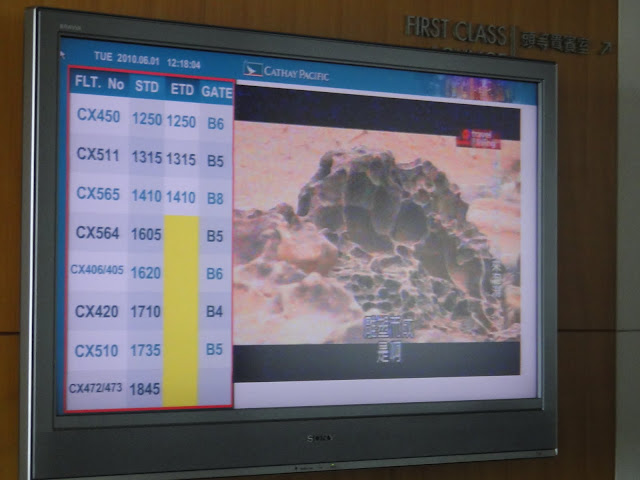 Flight Information Display in the lounge 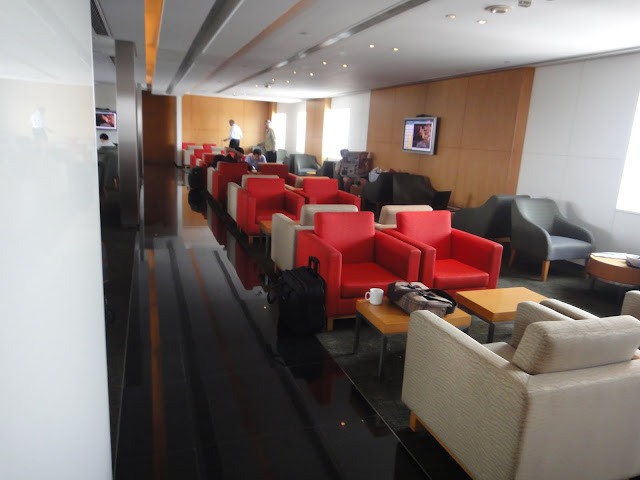 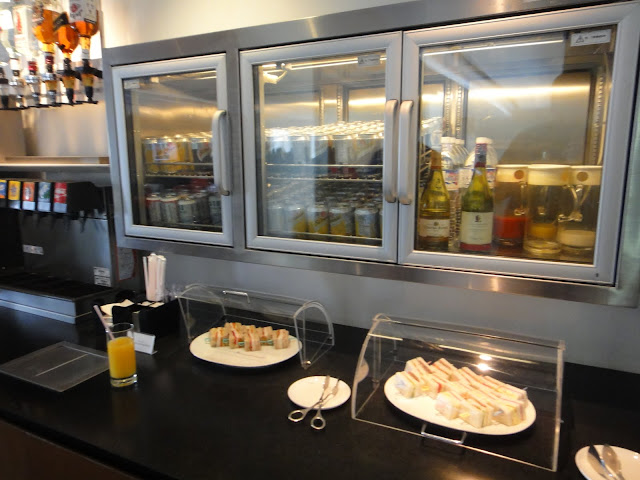 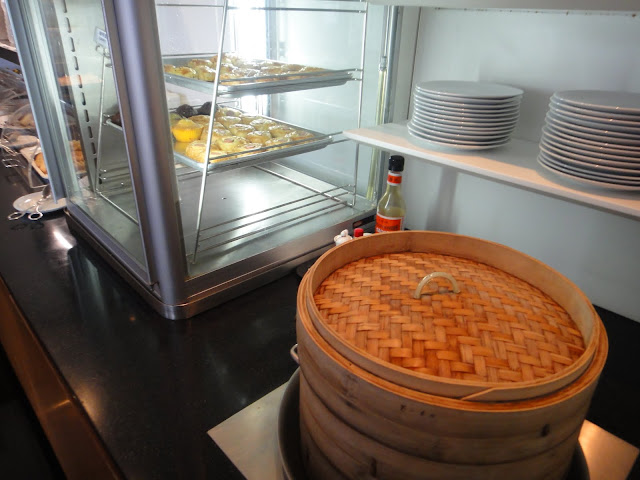 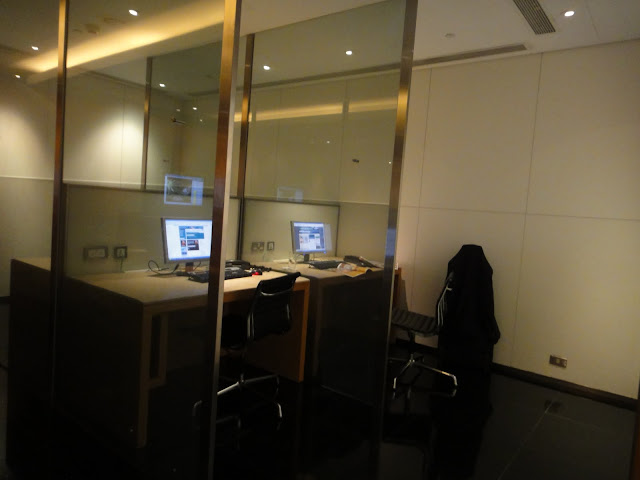 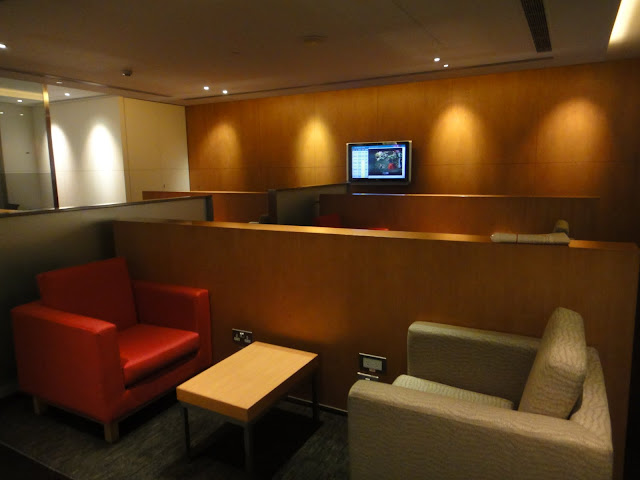 It wasn't very long before it was time to head to gate B5... 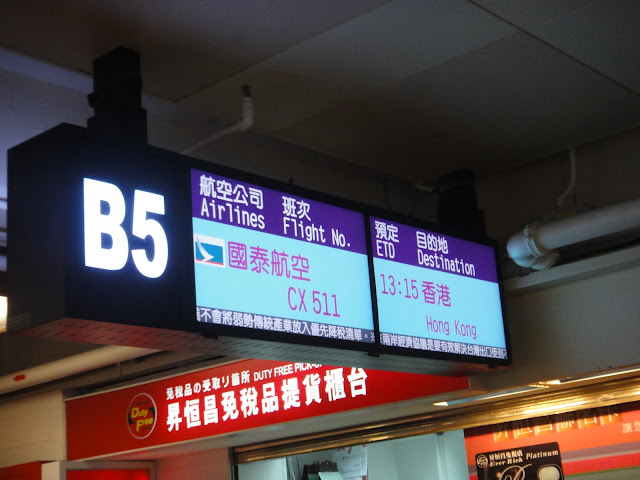 The gate holding area was looking quite busy, and the boarding process had just commenced. I looked out the window and spotted Airbus A330-300 B-HLK outside. Funnily enough, it was parked right beside the Thai Airways Boeing 777 I had just arrived from Bangkok in! 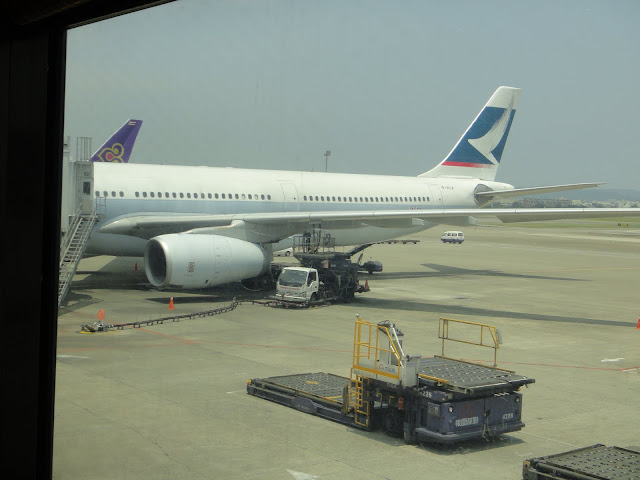 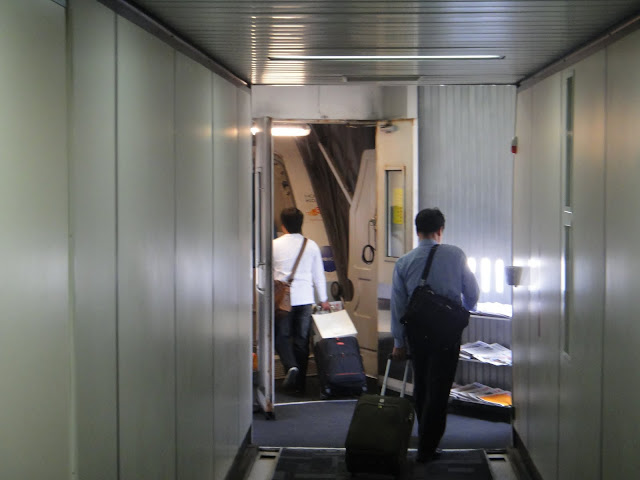 I was warmly welcomed on board by the cabin crew and took my seat in 17K. Before long I was offered a glass of Champagne Deutz. Since it was my first time on Cathay Pacific I took some time to familiarise myself with the seat... 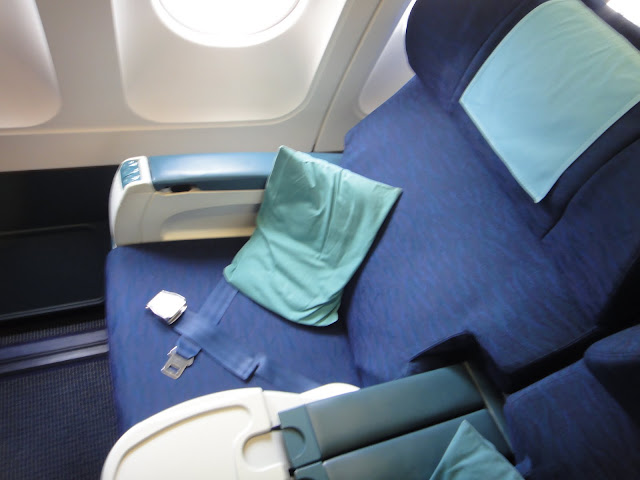 My seat, quite comfortable for a short flight, but seat pitch is less than expected 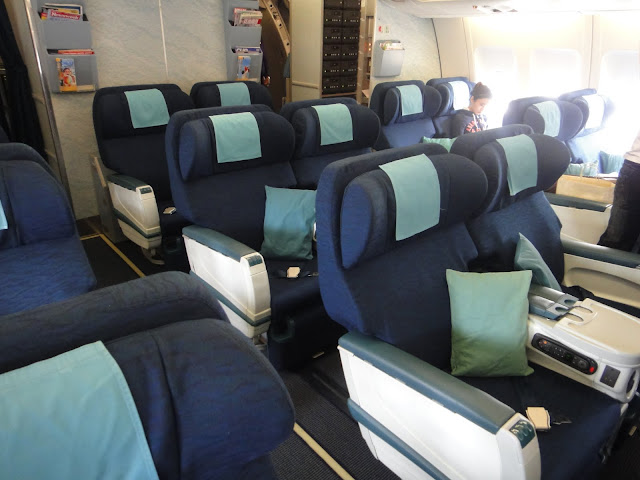 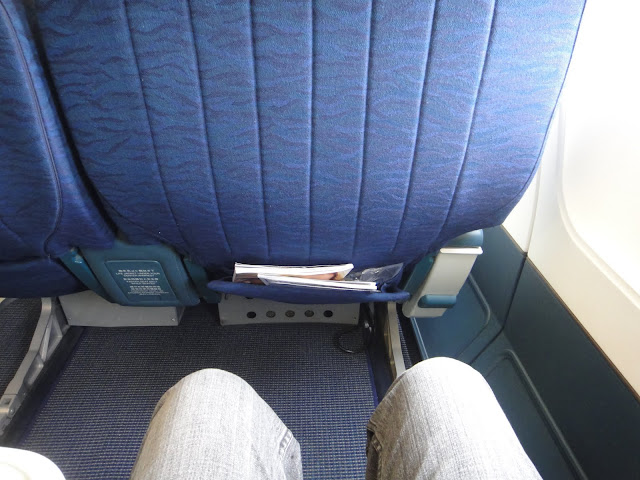 Seat pitch, not as generous as Thai or Singapore Airlines 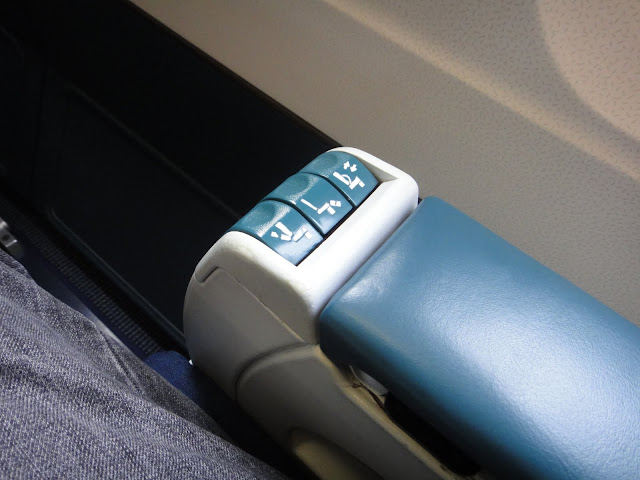 Ancient looking seat controls, the recline is not electronic, you have to manually push back 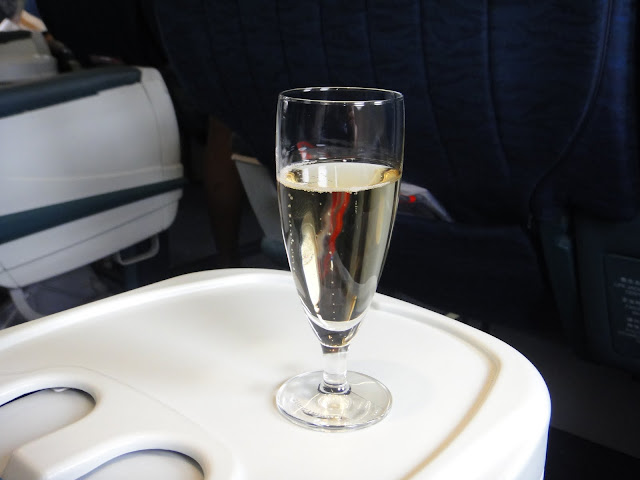 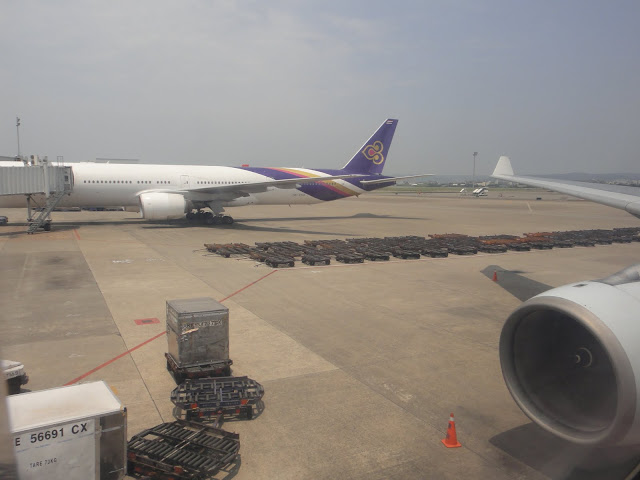 My ride into Taipei, HS-TKD is parked beside us, about to push back to continue its journey to Seoul

The load in Business Class today was pretty low, about 40%, the seat beside me remained free thankfully. At 13.10, with the safety video playing on the projector screen, we pushed back, 5 minutes ahead of schedule. We taxi'ed out to the runway for a short take off roll and smooth climb out. 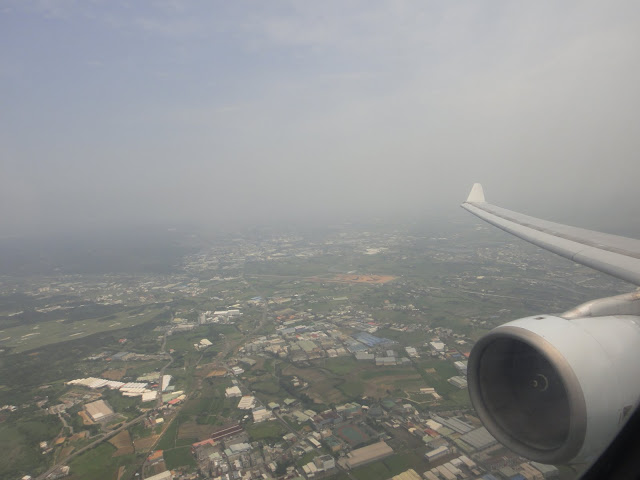 Climbing out of Taipei

There was quite a bit of cloud to climb through before the seat belt sign was switched off. I decided to check out the studioCX inflight entertainment system. On this aircraft the entertainment is an older style looping system with small pull out screen. Basic but no problem for a short flight. This is where all the tapes are found: 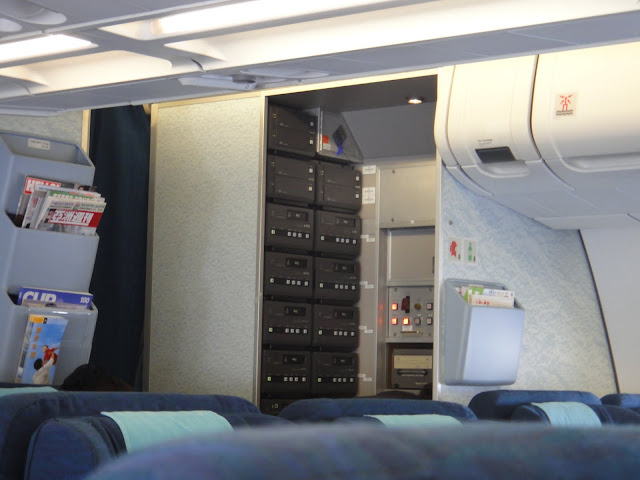 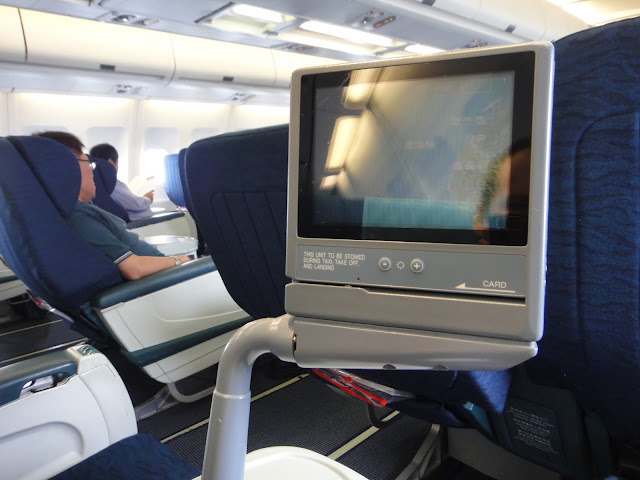 I started watching TV (movie's not offered on this short sector), but my system from and came up with a fatal error. The crew offered to reset it for me, but the reset process took over 15 mins, so I pulled out the adjacent seats screen and watched it instead.
It wasn't long before the crew came around with the meal, all presented on a single tray, with the hot main course served from a trolley beside the seat. The crew were really friendly and wanted to make sure I was happy with my food, and they addressed me by name at all times. The inflight supervisor personally came over to apologise for my faulty entertainment system. These little personal touches mean a lot. 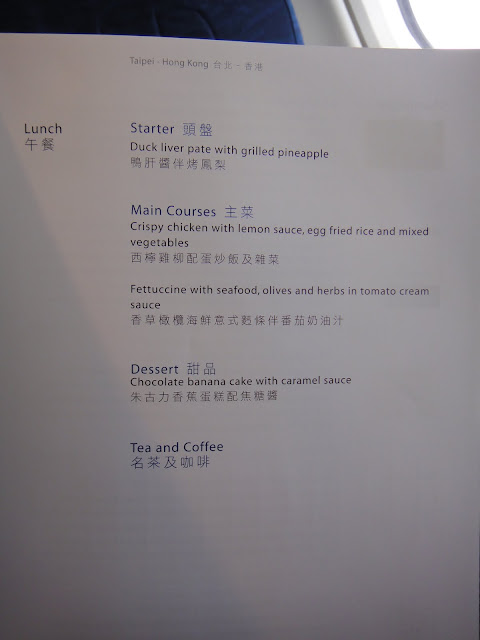 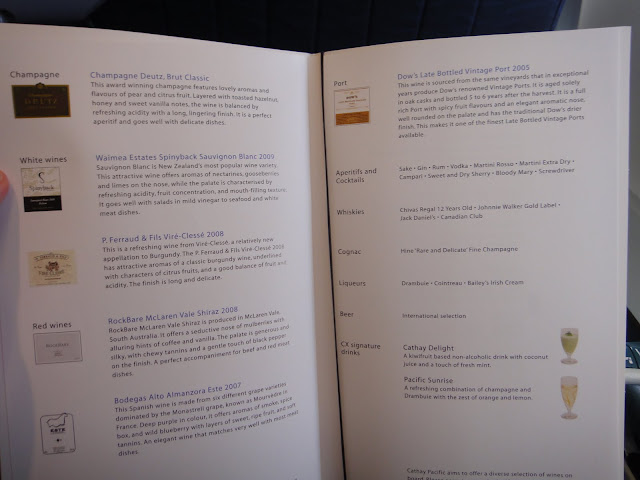 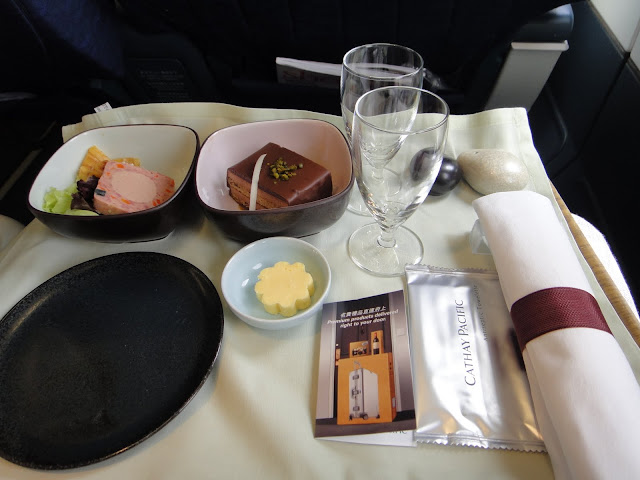 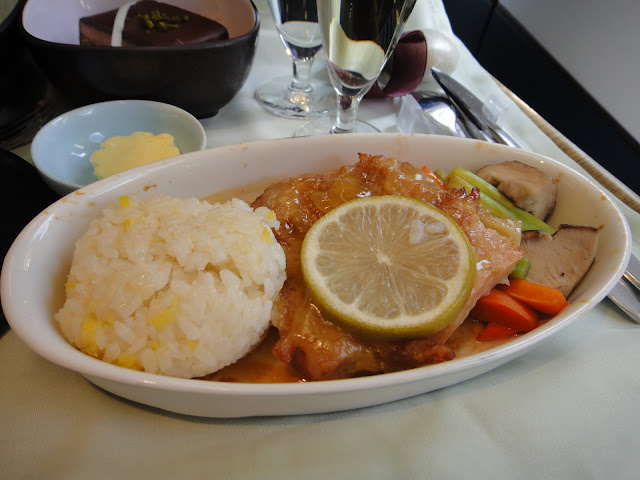 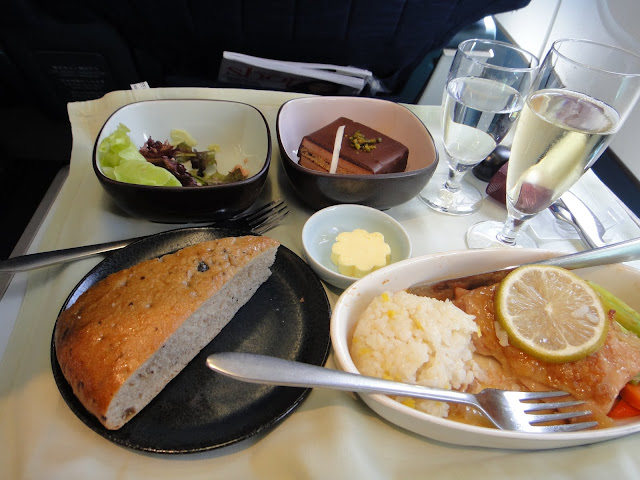 The food was presented quite nicely, with only a 75 minute flying time, I was pretty impressed with the offering. I enjoyed the duck pate appetiser, and the main was quite ok albeit a little bit bitter. The bread was warm and fresh, and dessert was quite nice but a little too sweet.
Once I had finished eating the crew asked my opinion of the meal which I gave ... and then we were offered tea and coffee. I was given regular top ups of champagne throughout the flight. 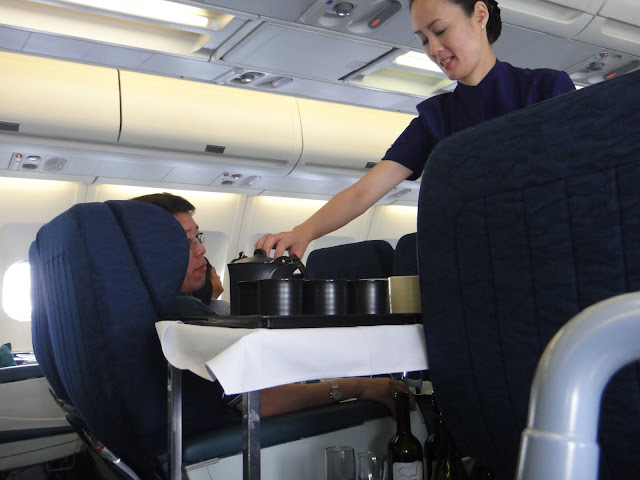 Soon after the tables were cleared we commenced our descent into Hong Kong. The weather was overcast with passing showers of rain. Below us I could see only the white clouds, I do enjoy landing in these sorts of conditions!

Although there was a steady stream of rain passing my window and we descended through heavy cloud, the turbulence was only very light and we made a smooth uneventful landing. 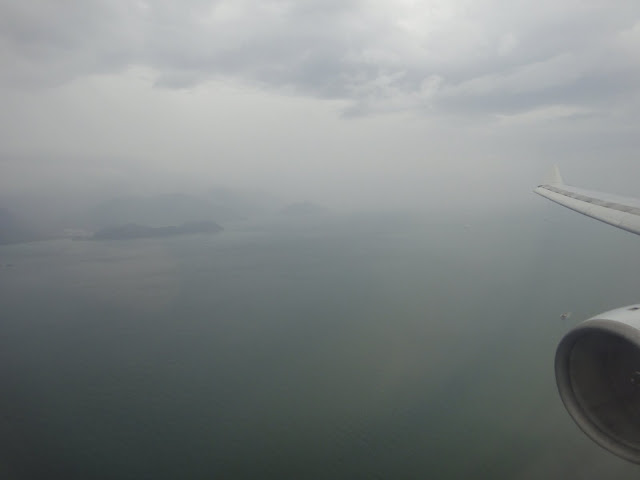 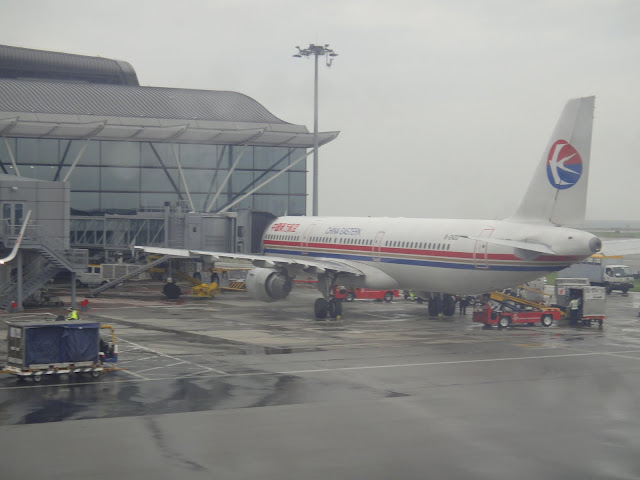 Spotted a China Eastern A321 as we taxi'ed in 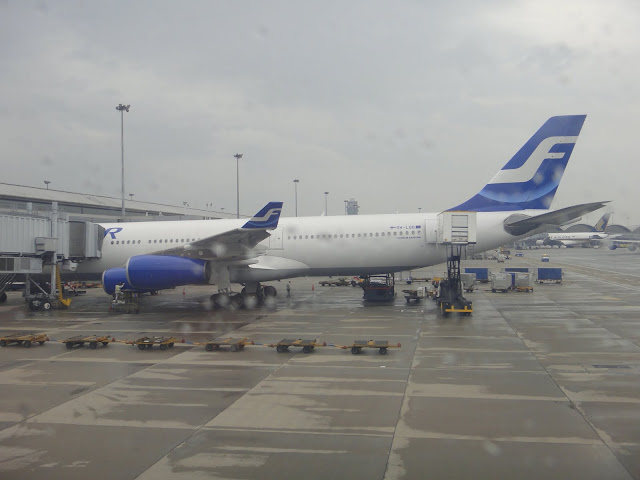 we parked next to this FinnAir A340
Before I knew it we were docked at the gate and it was time to leave and explore Cathay's lounge offerings in Hong Kong. I had one more flight today, back to Bangkok, but a long transit of 5 hours here in Hong Kong first.

For my first ever flight on Cathay I was pretty impressed with the service and wines. I felt the food was ample for such a short sector, but the seats and inflight entertainment system are starting to look very dated now, I believe some of the A330's have a newer regional seat installed so I look forward to trying that and comparing. 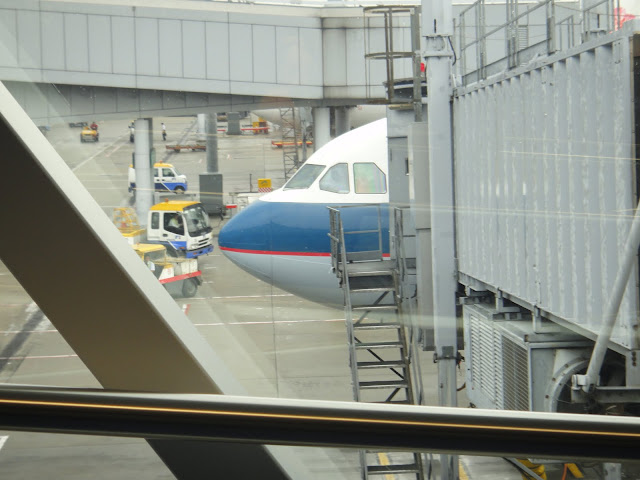