- June 07, 2010
AIRLINE: Thai Airways International
AIRCRAFT: Boeing 777-300 (originally scheduled B777-200)
CLASS: Business Class
ROUTE: BKK-TPE
SEAT: 16K
SCHEDULED: DEPART 0710 ARRIVE 1150
ACTUAL: DEPARTED 0713 ARRIVED 1145
Today's flight was to position me to Taipei to start doing some status runs from Taipei on Cathay Pacific, and satisfy my hunger for flying!! Up until now I have mostly flown Star Alliance carriers internationally, but I think it's about time I have some status with my own national carrier, Qantas. What better way to do that than some discount Cathay business class tickets??
The journey today would be Bangkok to Taipei (with Thai), and then coming back the same day Taipei to Hong Kong to Bangkok (with Cathay). With such an early flight I woke up at 4.45AM, had a quick shower then hopped in a taxi for the 20 minute ride to the airport. I was pulling up at Door 1 (Thai premium checkin) by 5.20AM. 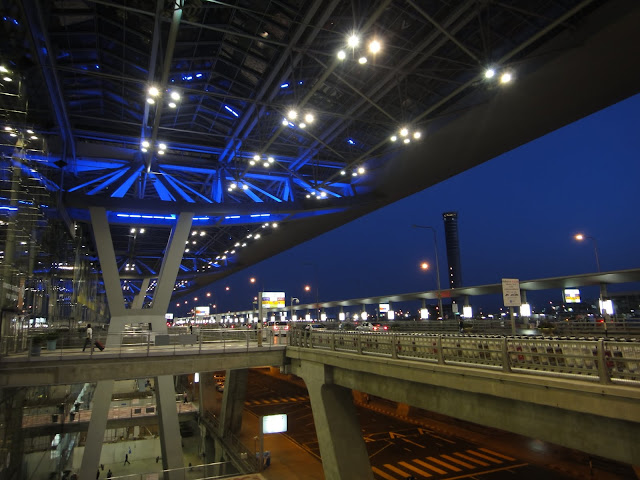 Arriving at Bangkok Suvarnabhumi Airport at 5.20 AM 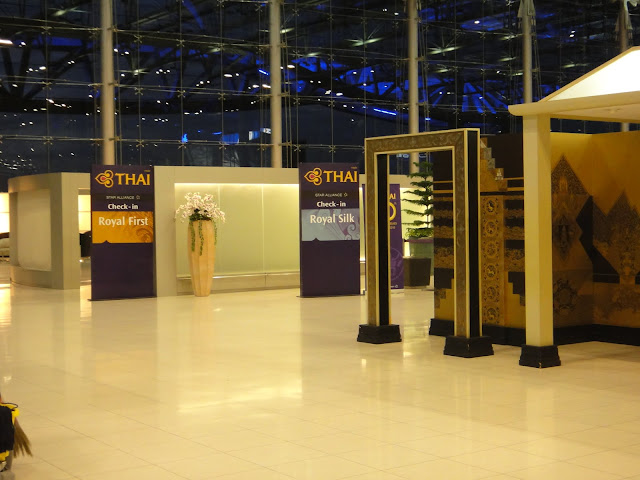 Thai Airways Premium Check In Area
The male staff member guarding the Royal Silk Class check-in zone asked where I was travelling to and confirmed I was flying Business Class, he then directed me to the check-in desks which are equipped with seats. There was very few people at check-in, possibly a result of recent political problems in Thailand causing a massive drop in tourist numbers. It took only a few moments for the efficient check-in agent to give me my boarding pass, there was no bags to check in so that saved time too. From here you walk directly to the Fast Track passport control counters, which are only for Thai passengers. Thai have dedicated fast track security for premium passengers too. It only took a couple of minutes to clear both and be in the departures area.


Having seen it all before at Bangkok I immediately went downstairs to the Concourse D Royal Silk lounge. This lounge is for business class passengers only, economy passengers with Star Alliance gold status must use the lounges on the other concourses. 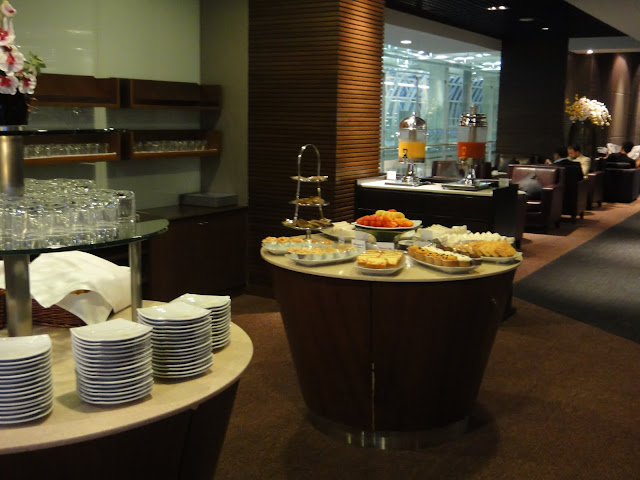 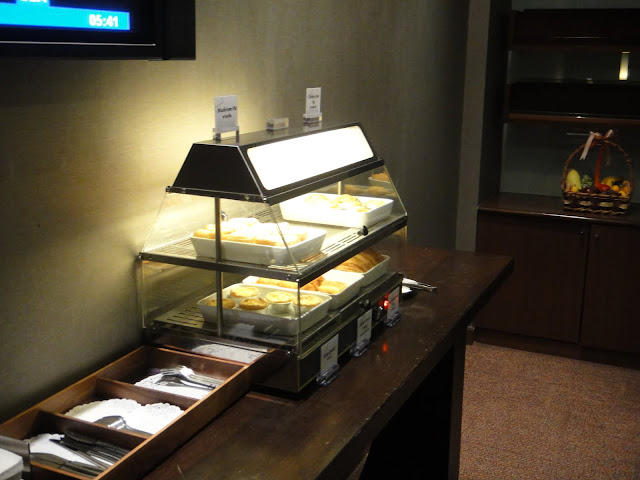 Food in Concourse D Royal Silk Lounge
I grabbed a coffee, orange juice and some snacks and watched CNN and surfed the net on my laptop. 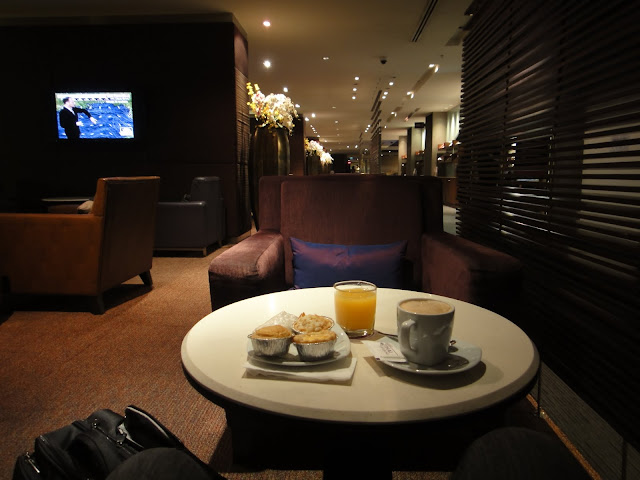 My seat in the lounge 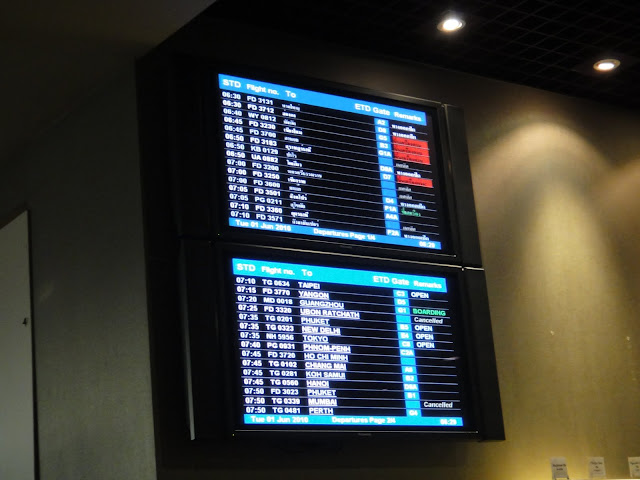 the lounge has it's own flight information displays
With about 35 minutes to departure I decided to head over to the gate, C3. It takes about 7 minutes to make this walk. 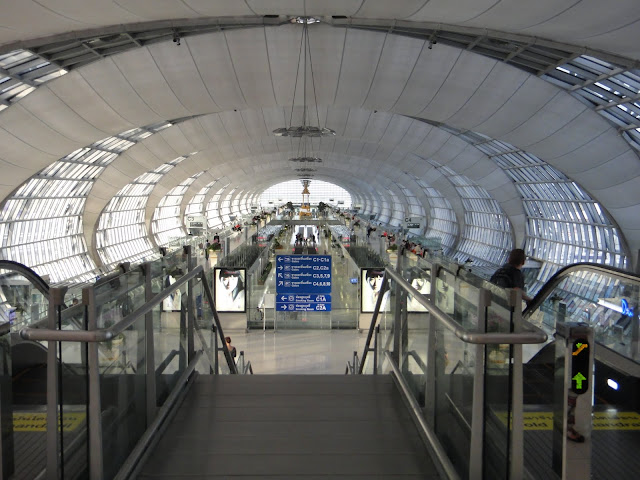 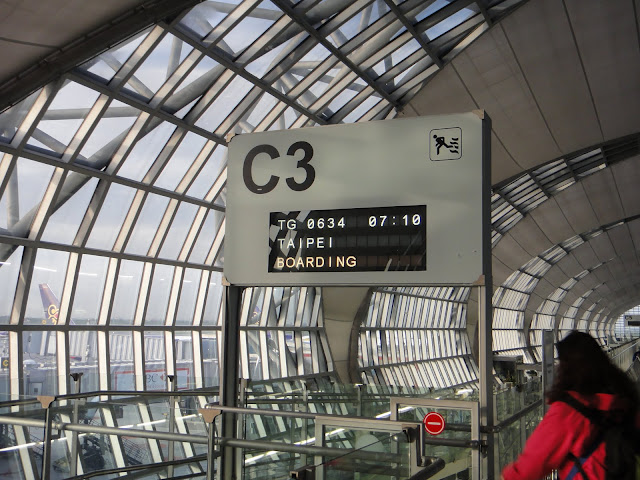 Arriving at gate C3
I arrived at the gate which had the status showing as Boarding, although boarding had not yet commenced. I was anticipating a light load on today's Boeing 777-200 service, but I saw a reasonable amount of passengers in the holding area... 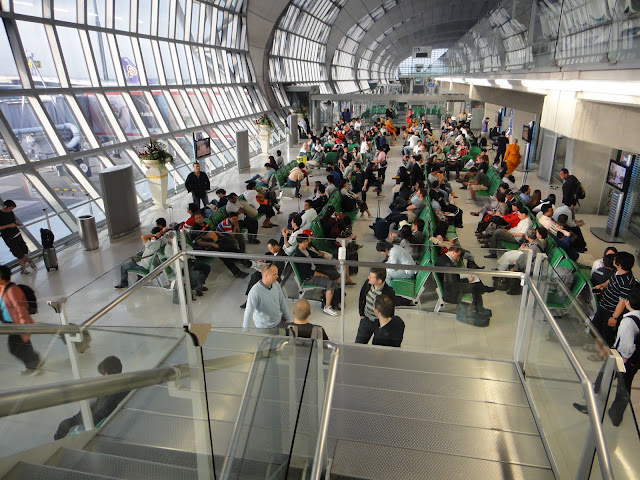 Gate C3 holding area
I glanced over at our aircraft and immediately realised we had been equipment swapped! (something Thai Airways is legendary for). Fortunately it was not a negative swap, instead of a Boeing 777-200 I saw HS-TKD, a Boeing 777-300 parked at the gate. The seats are not all that much different between the 772 and 773, although the 773 squeezes one more in each row (2x3x2, compared to 2x2x2 in the 772). Although I was only travelling as far as Taipei, this flight number TG634, continues on to Seoul with the same aircraft. 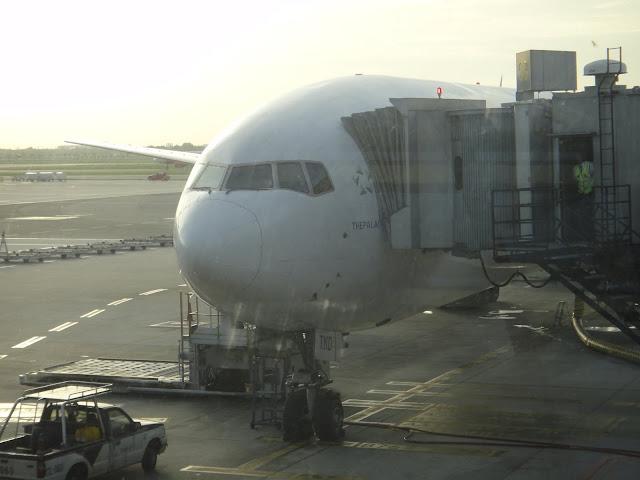 HS-TKD preparing for departure to Taipei and onwards to Seoul
I had only been standing in the holding area for a couple of minutes when the boarding call for business class and gold card holders was announced. I walked down the jetway and was welcomed with the usual 'Sa Wat Dee' from the crew. I settled down in seat 16K, which I had selected during online checkin the previous day. 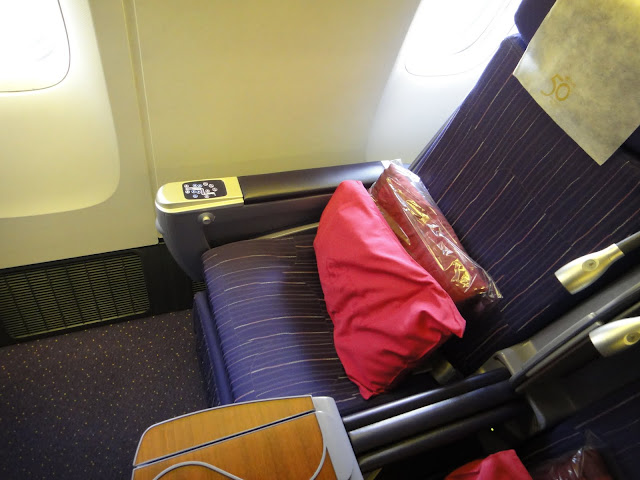 Seat 16K - has one missing window, but you still have two to look out of
It did not take long for the crew to deliver me a newspaper and welcome drink. Although it was before 7am, I decided on a glass of champagne... 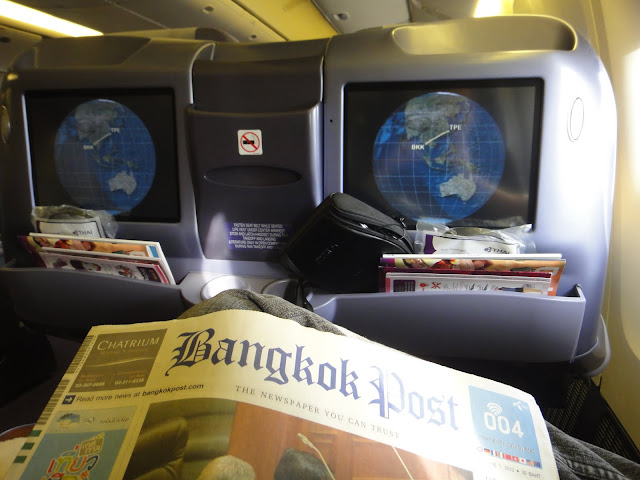 Reading the latest political news on board 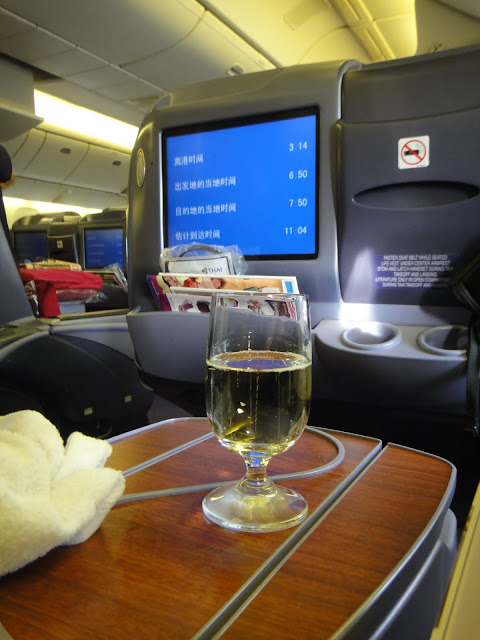 Champagne welcome drink
Within a couple of minutes of receiving my welcome drink I had a hot towel offered. This was quickly followed with today's menu. I was quietly hoping that the seat next to me would remain free, so far so good! 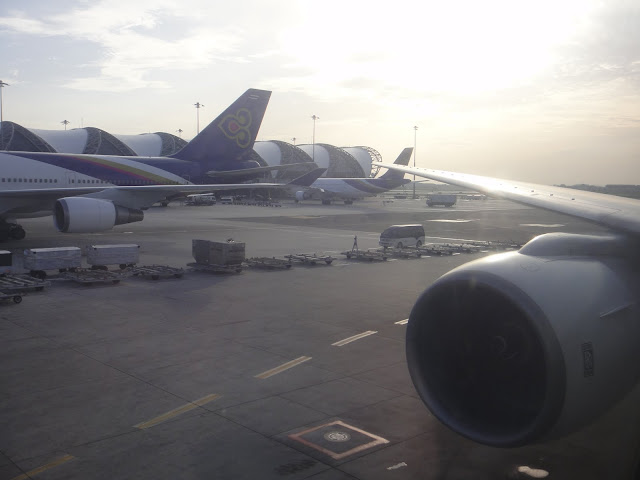 Sun rising over Bangkok, a company Boeing 747-400 parked next to us 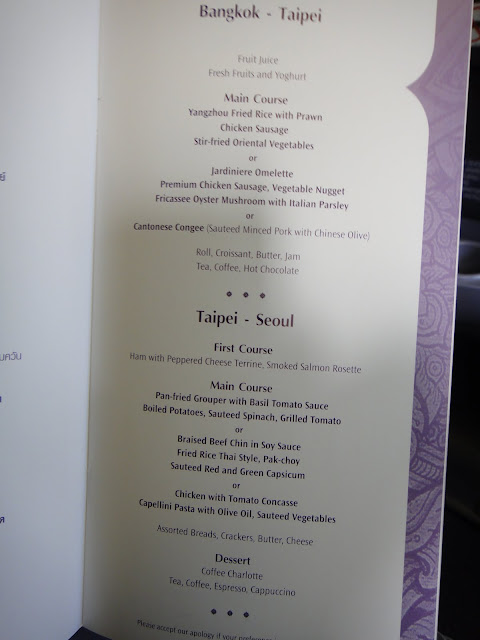 Menu featuring both legs of TG634 today
The crew did a PA and announced today's flying time to be 3 hours and 15 minutes. As is usual for Thai, the captain does not make his announcement until after takeoff.
At 07.13 AM we pushed back from the gate, 3 minutes behind schedule. The seat beside me remained empty and there was 25 out of 34 (74%) seats occupied in business class. We had a pretty short taxi time to the holding point for runway 19L. We waited for one aircraft to depart before we lined up and the familiar roar of the Rolls Royce engines filled my ears as we rolled down the runway. 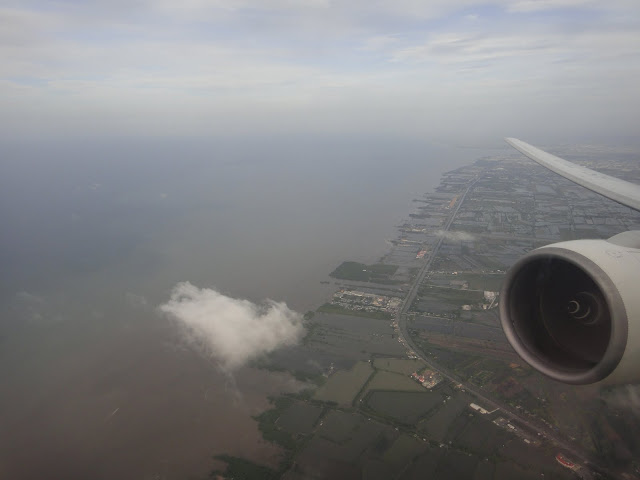 Shortly after takeoff we cross the coastline, before making a left hand turn to head north east 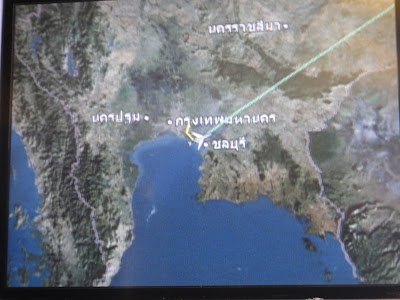 routing out of Bangkok

After we climbed above a couple of cloud layers the captain turned off the seat belt sign and made a PA advising of today's flying conditions and route. Things would be fairly smooth! The crew had already sprung into action and were preparing a drinks trolley. 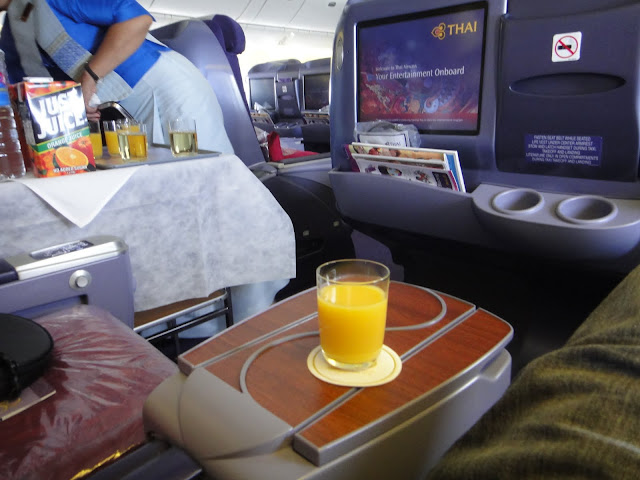 After a quick whip around the cabin with the drinks trolley the table cloths were brought out and the first part of breakfast was presented: 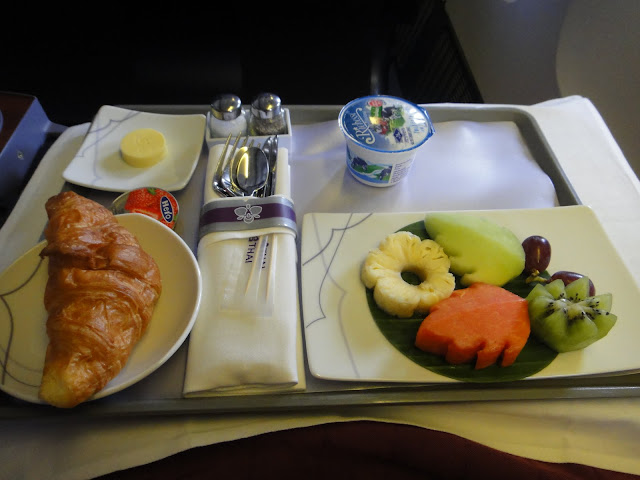 Breakfast - fruits, yoghurt, croissant
The bread basket was also presented with croissants and bread rolls, I took a croissant. The presentation of the fruit was typical Thai Airways style, I think it looks nice. The fruit was quite good except the pineapple was possibly a little over ripe. The yoghurt was average but that is to be expected in Asia. The butter was imprinted with the Thai Airways logo which is a lovely touch.
After I had completed my fruit and yoghurt the empty plate was removed and replaced with my main course, I chose the eggs option... 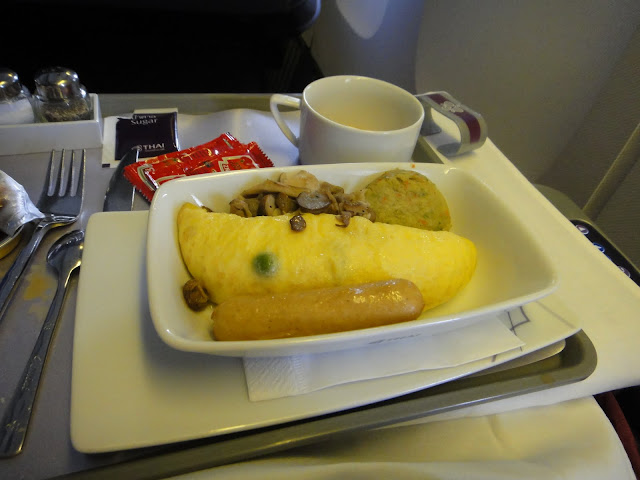 Eggs main course
The presentation of this dish was pretty poor! Rather than the very average chicken sausage Thai insist on serving, why not put a piece of nice bacon? The vegetable nugget was soggy and mushy. The omelette itself tasted ok though. Despite being pretty average, and no different to an economy class breakfast main course, I finished it off!
There was a tea and coffee service whilst I was eating and I had a couple of coffees. Coffee was average, nothing special there.  Overall it was a filling enough meal, but Thai should try to differentiate their business class main course from the economy class ones a bit more.
As breakfast was being cleared I noticed we were passing over the Vietnamese city of Da Nang. I napped this shot: 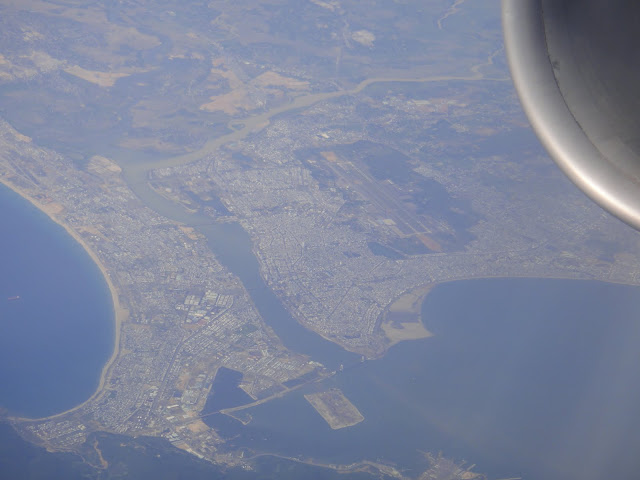 Da Nang, Vietnam. The airport is visible in this shot
After breakfast, the crew went around offering socks. With just under 2 hours left, the crew left us mostly to ourselves, with most passengers taking the opportunity to get a bit more sleep in, which worked well with the angled lie flat seats of the Boeing 777-300. Thai also have a good blanket in business class which is more like a duvet and significantly heavier than what some other airlines give you.

I had been watching a Thai movie but I decided to pause it and get a bit of shut eye myself.
After about an hours nap I took a visit to the lavatory and snapped a photo of the amenities: 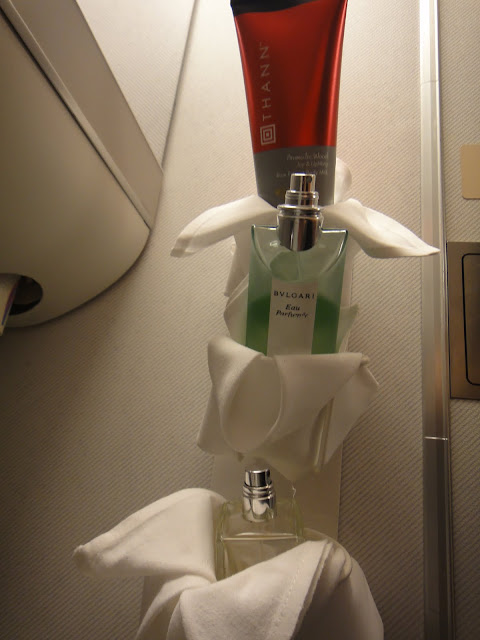 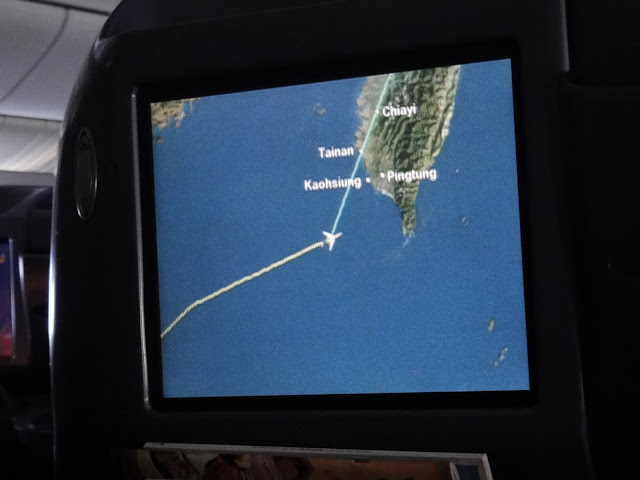 Approaching Taiwan
It wasn't long before we were approaching the Taiwan coast we we started our descent from 37,000 ft. We seemed to step down in segments,  leveling off quite regularly before descending again. The route towards Taipei took us just off the west coast of Taiwan before turning onto final approach into Taipei. 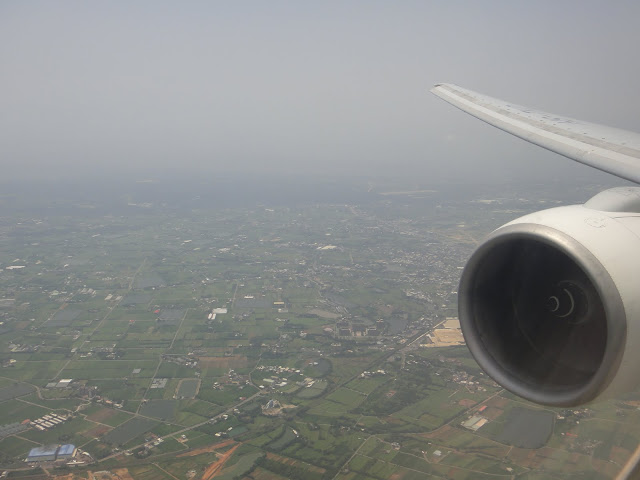 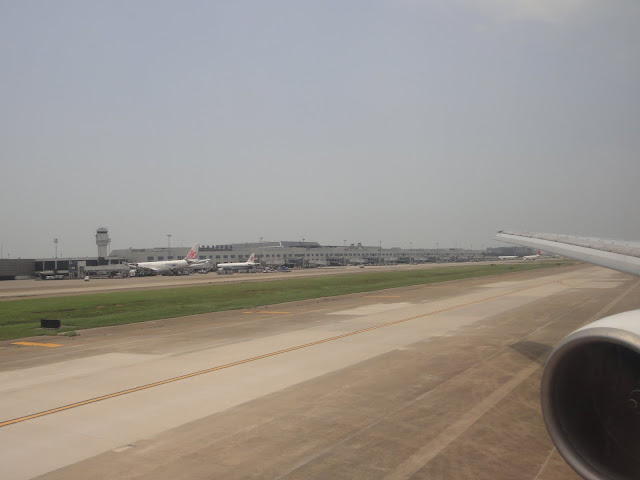 Landed and turning off the runway
It was a bit of a bumpy approach with the engine winding up and down quite a lot but the final touch down was quite a smooth one. This was my first time landing at Taipei so I was pretty interested in checking out the airport. We taxi'ed to the other side of the field to park at our assigned gate.
The crew gave instructions to those passengers who were continuing to Seoul to disembark and take their belongings with them for security screening before reboarding for the next sector. 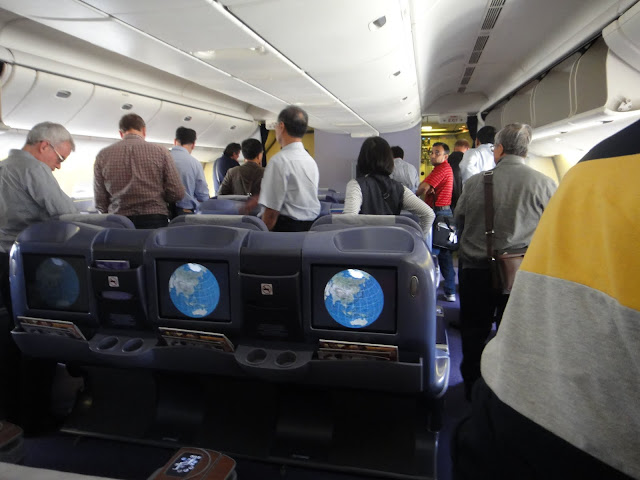 Disembarking at Taipei
After just over 3 hours on board I left the aircraft feeling pretty satisfied with the Thai Airways experience. The crew were quite friendly and efficient, although they never seem to address you by name which is a nice touch that Singapore Airlines offer in Business Class.
One flight down, 2 more to go today....
Boeing 777 business class Thai Airways trip report